We are at the stage where our writers go head-to-head and hope to battle their way through to the semi-finals. At this point, each of our writers has only one watch remaining. Today, we have our last quarter-final that sees a bust-up between Ben and Bert. We need your help to find out who will be one of the four final contenders. Where will your votes fall?

We’re at the sharp end now. Ben has one watch left, as does Bert. We need you to pick your favorite in this March Mania quarter-final. Following this round, the semi-finals commence this coming Monday, so you’ve not got long to register your opinion. Go hard or go home. It’s time to leave it all on the court… 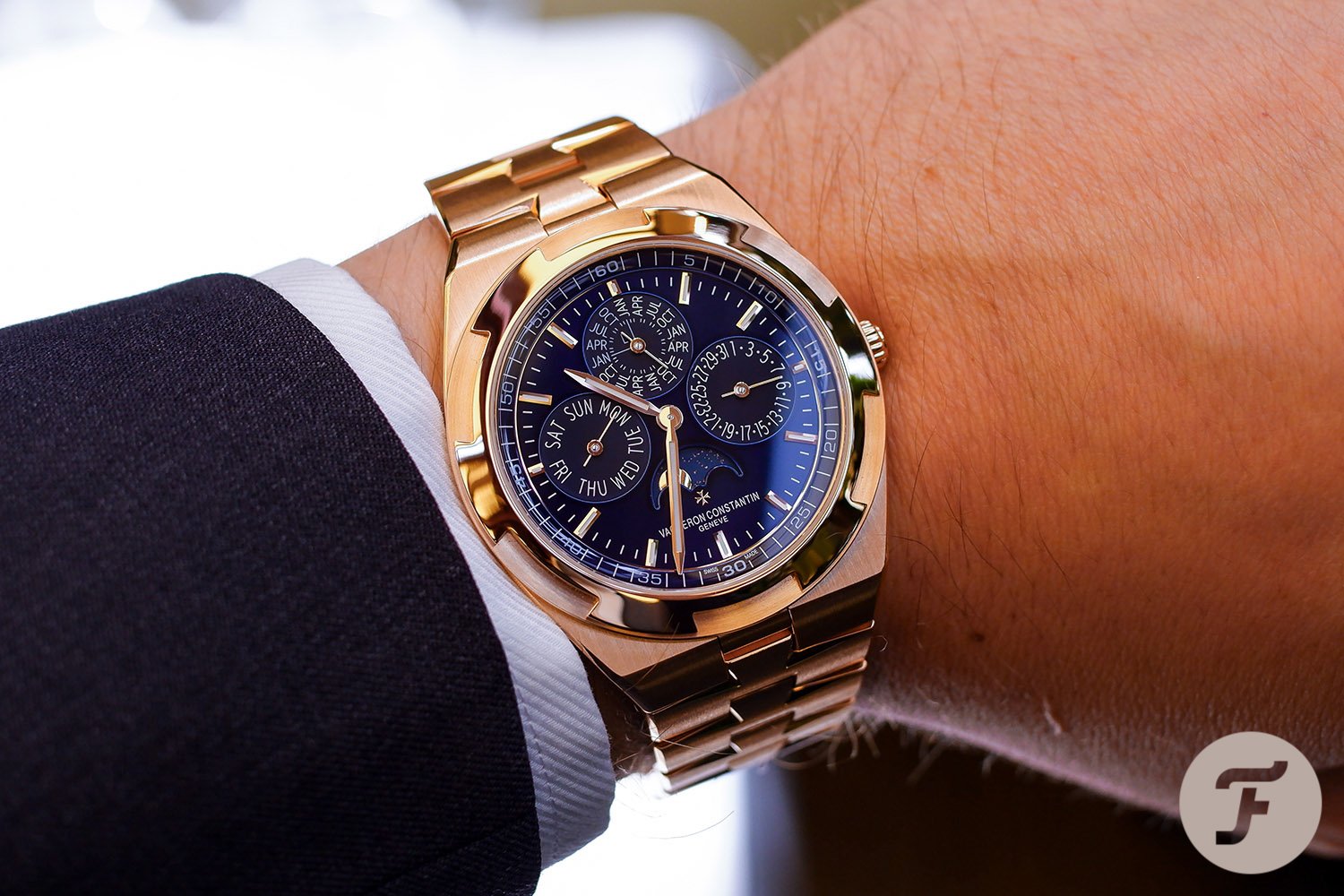 Wow, that is a cumbersome sub-heading. Perhaps I exaggerated the names of each watch to their full titles for comedic effect. But it does demonstrate the might of these horological heavyweights for our concluding quarter-final round. The heft of the model names correlates to each timepiece’s mass, as this round features the two of the few precious metal pieces that made it to the head-to-head stage. On the left, dressed in the finest garments, is the Vacheron Overseas QP in pink gold and alluring blue dial. In the right-hand corner is the Lange Datograph Lumen in illustrious platinum.

Interestingly, both quarter-finalists beat out the previous round contestants by taking 64% of the voting share apiece. The Overseas clipped the wings of the JLC Master Control chronograph with sector dial from Ben’s group. In the battle of luminescence, the Omega #SpeedyTuesday’s glow lost out to the translucent Lange Lumen in Bert’s picks. Now the showpieces of Richemont’s most prestigious brands face each other for a place in the semi-finals. The Overseas is an ultra-thin self-winding perpetual calendar, whereas the Datograph is a manually-wound, ultra-thick chronograph, with an outsized date complication. Even so, the pricing is only separated by €7,200, with the Lange at €101,700 and the VC just under at €94,500. 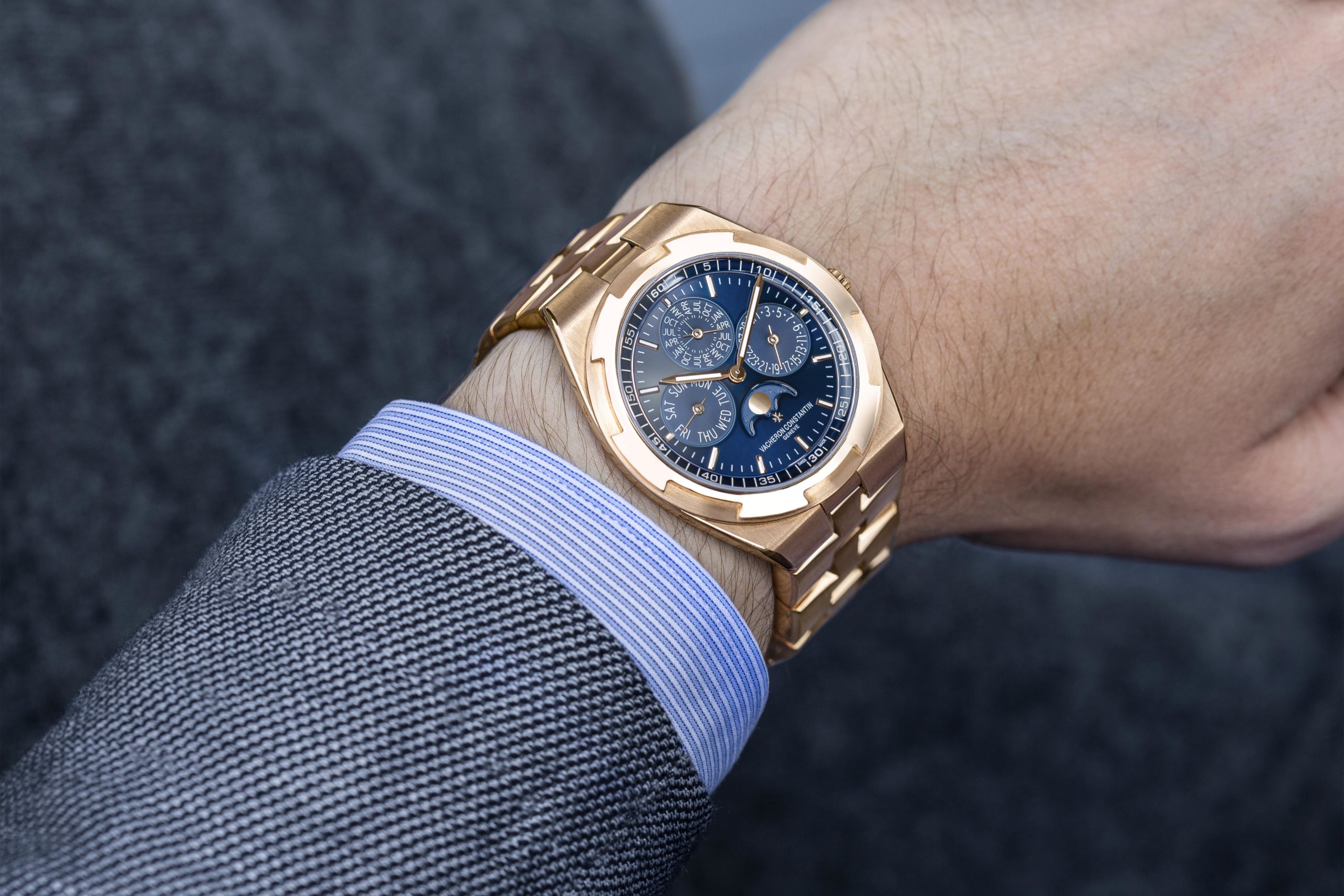 I am absolutely over the moon that the Overseas has made it this far in the 2021 March Mania competition. Not only was it my top seed from the preliminary twelve, but the Overseas was also easily the coolest watch I went hands-on with last year. The Caliber 1120 QPSQ/1 accounts for each month’s relevant days, without calendar adjustment, to the year 2100. This even includes the additional day in February during leap years. At that point, a slight correction is required, and the watch can continue for another century. The 22-karat gold rotor provides reassuring inertia. Sporting the Geneva Seal, this movement is confirmed as having been fabricated and assembled within the Canton of Geneva.

Now with the tech talk out of the way, let’s get to the real reason this valiant Vacheron has bested the onslaught to get to this stage. It. Is. Drop. Dead. Gorgeous. The third generation Overseas is already a knockout with a case shape that’s finally found its form in its third generation. Combine the seamless integration of the case and bracelet in pink gold, and already the temperature rises. The final slam-dunk came in 2020 by incorporating the jaw-dropping deep blue lacquer dial from the time and date model. The balance is beautiful, with precise placement of sub-dial indications. Even the logo sits comfortably within the curvaceous notch of the moon-phase aperture. This Overseas oozes luxury without ostentation. 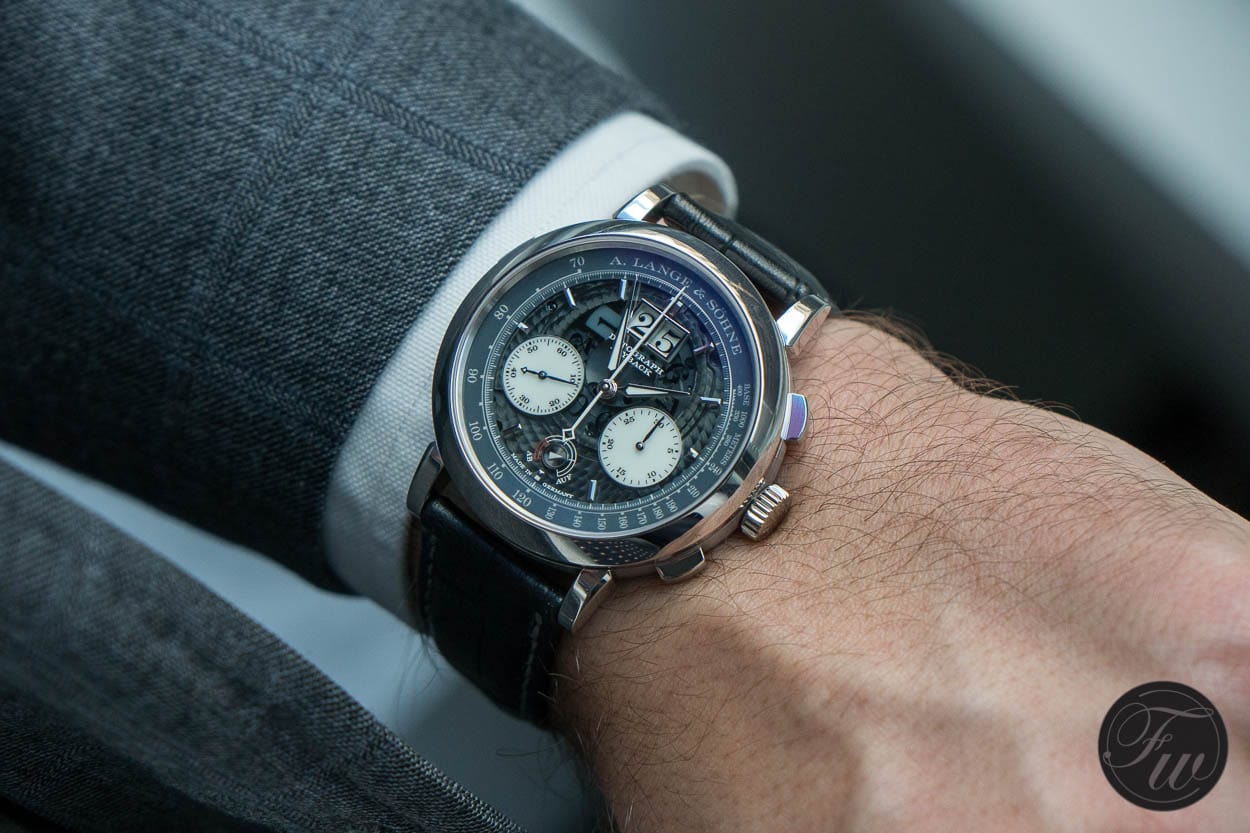 I guess we all saw this coming. Let’s face it: there are #1 seeds and there are #1 seeds. If you’re looking for the definition of dominant, look no further. The A. Lange & Söhne Datograph Lumen steamrolled the competition to this point and looks likely to set-up a semi-final date with its catalog mate, the Lange Zeitwerk. Choosing between those two powerhouses would be a real tricky do, but the situation here is clear: the Datograph slays the Overseas and it isn’t even close.

Haute Horlogerie is a wonderous world, but it is, every so often, rightly accused of yawn-inducing stuffiness. Even the Overseas’ regal pairing of pink gold and blue can’t elevate that snooze-fest to the levity expressed by this luminous Lange. Whoever decided the Lumen concept could be applied to A. Lange & Söhne watches without completely undermining the brand’s integrity deserves a medal. Or maybe an honorary Geneva Seal? On paper, it sounds ridiculous. In practice, the Lumen is sublime.

Fusing traditional horology and the brand’s aesthetic calling cards with a glowing phizog, even the blackest badger and friendliest friend of Max Büsser would be proud. And yet, perhaps through a mixture of high-quality execution and a ferocious force of will, Lange has done it. The result is so spectacular, I’m anointing myself the favorite to take home this crown; just call me Bert Champ already. I expect I’ll have to go through the Zeitwerk and perhaps the Czapek (if it can make it past the last Speedy standing), but I do not doubt this model’s potential for greatness.

I was robbed in the Speedmaster World Cup semi-finals — my pocket picked by that damn beagle that went on to split the vote against the ultimate champion, the Cal. 321. This time, I won’t be denied. Help me out with a vote below and align yourself with the soon-to-be champion. You won’t regret it.

Hot Topics
Introducing: The Omega Speedmaster Super Racing With Spirate System
165 comments
Design Vs. Specs — Which Is More Important To You When Buying A Watch?
87 comments
New Release: The Limited-Edition Seiko Prospex SLA067J1 Diver
64 comments
My Predictions For New Omega Speedmasters In 2023
60 comments
The Best Independent/Microbrand Alternatives To The Rolex Explorer In 2023
53 comments
Popular
A Question From A Reader: “Which Modern Speedmaster Is Closest To The Original Moonwatch?”
Robert-Jan Broer
14
(From The Archives) Shut Up & Read The Truth About Cartier Watches
George Cramer
21
Hands-On With The Seiko Prospex Dawn Grey Series
Robert-Jan Broer
12