This Baselworld I had the opportunity to meet another artist who’s into watches. He goes by the name of Sunflowerman. After we’ve talked for a while I showed him my Speedmaster and then the interview became a cross-over with a live sketching session. Sunflowerman has spend many hours drawing Speedmasters and he really appreciates the design. 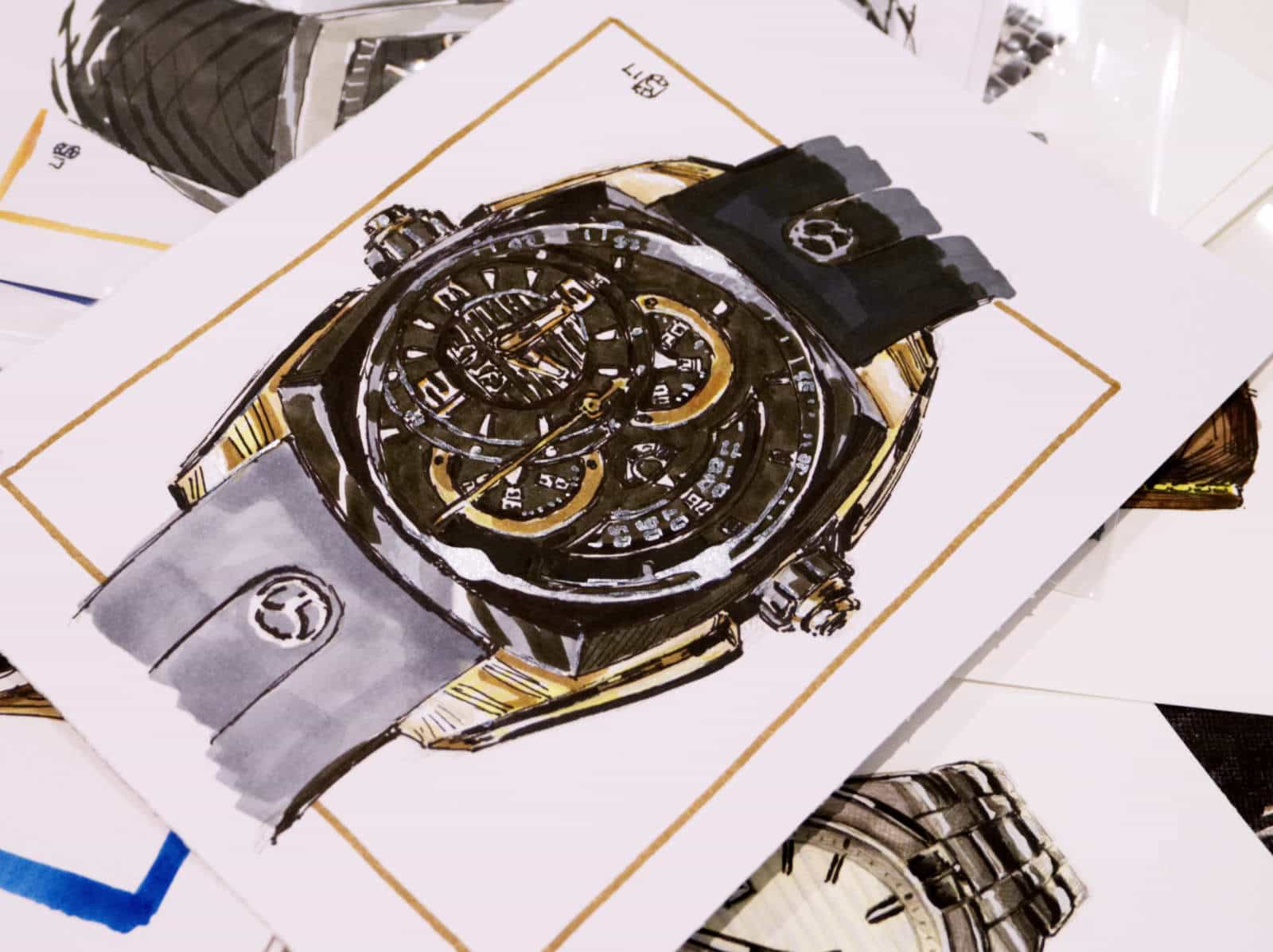 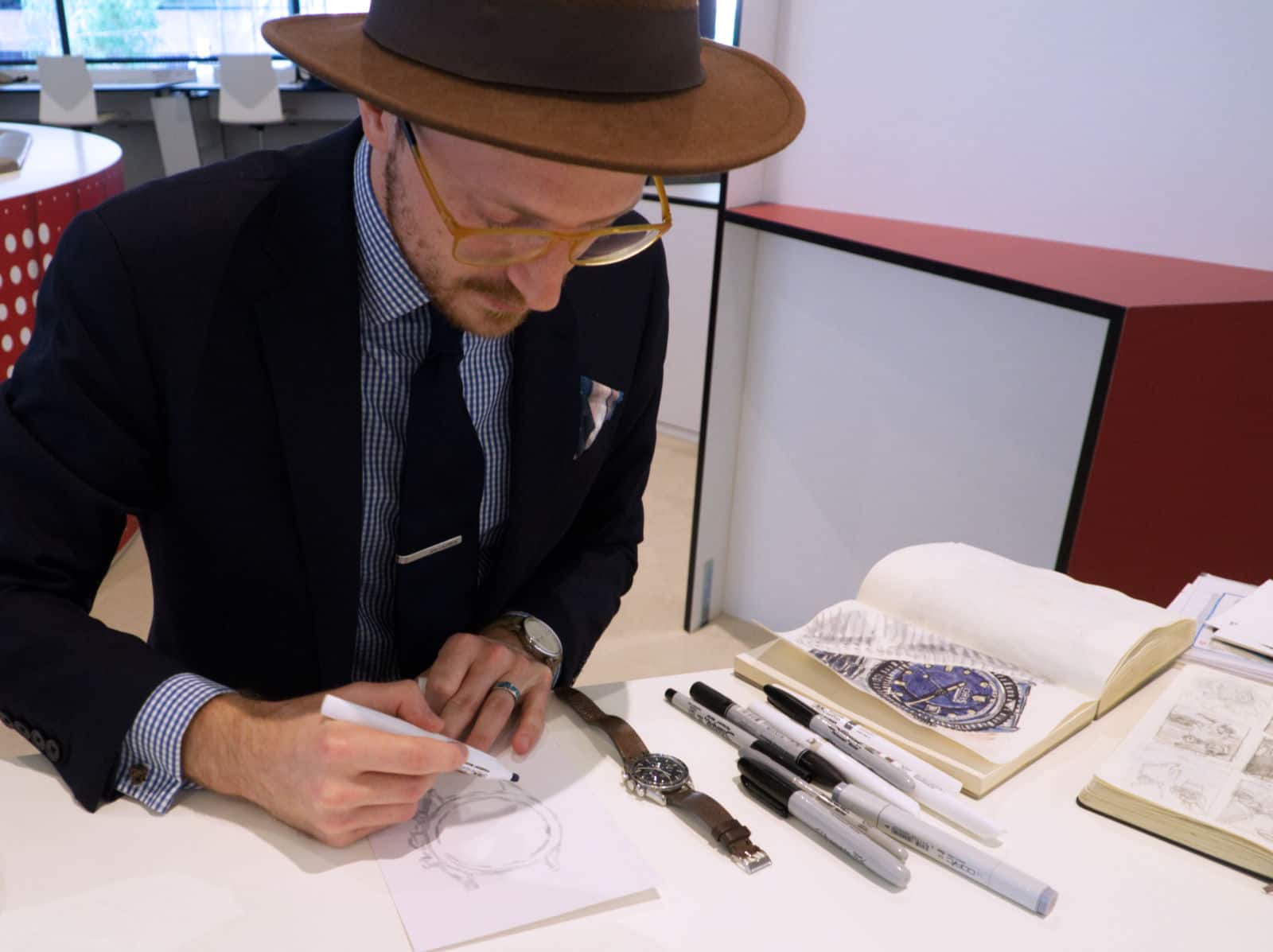 Start of the Speedmaster drawing

Sunflowerman was born in Holland. No, not The Netherlands but the town Holland in Michigan (United States). After he went through different art studies, he started to travel, together with his girlfriend. Nowadays he earns his money with his creative skills and is active in the field of mens fashion. Besides this, he also loves watches and finished quite a few projects and drawings. He loves water color paintings and is specialized in this older technique. It is a very difficult technique and not many artists succeed to master it. He did though, and created his own style. 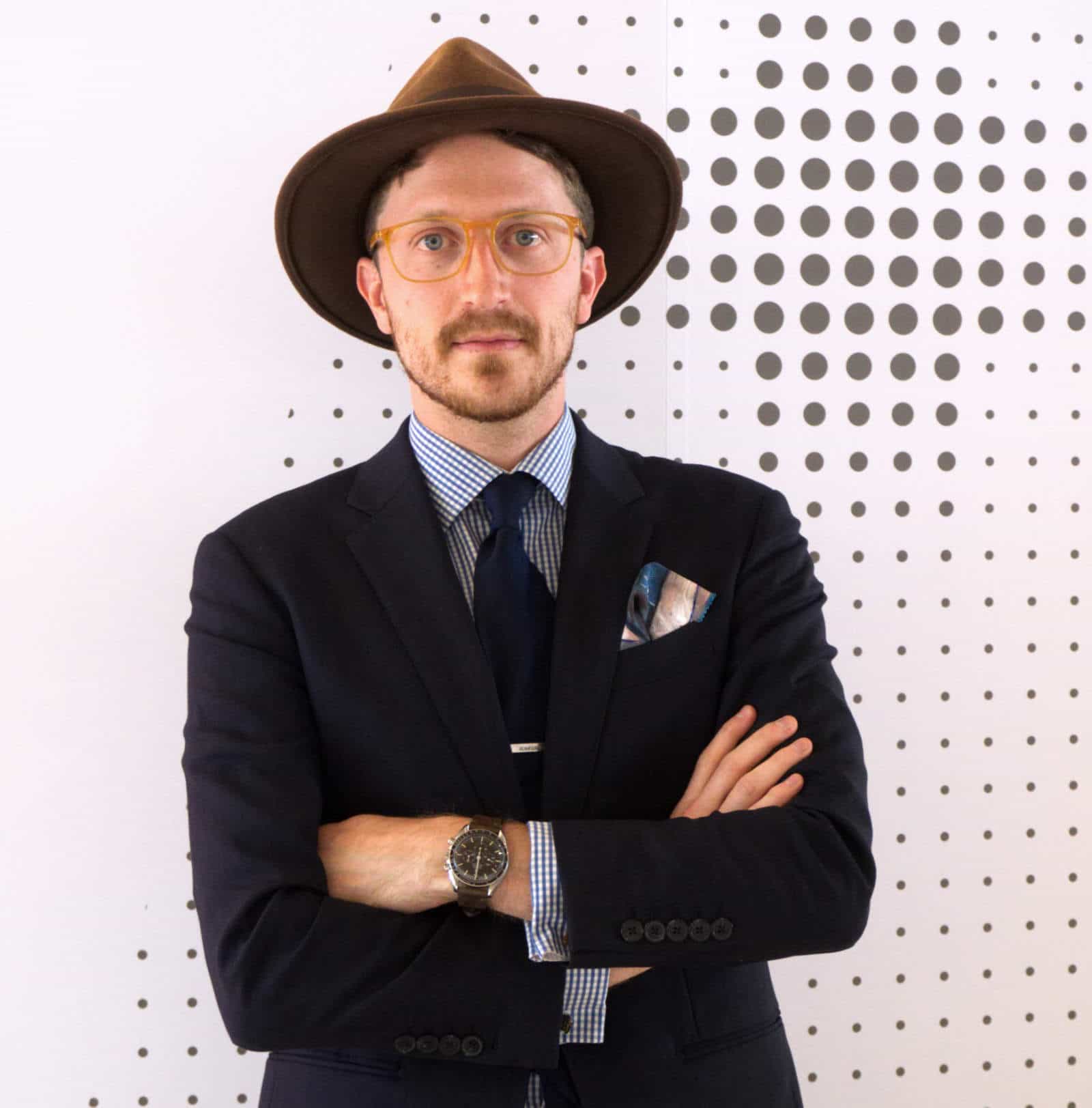 The watch industry has a passionate crowd. Inspired by this, he initiated a special project: draw 100 watches in 100 days. All kinds of brands and models based on follower-requests via his Instagram account. Shortly after, he was asked by Hanhart to draw their watches and then it really hit off. 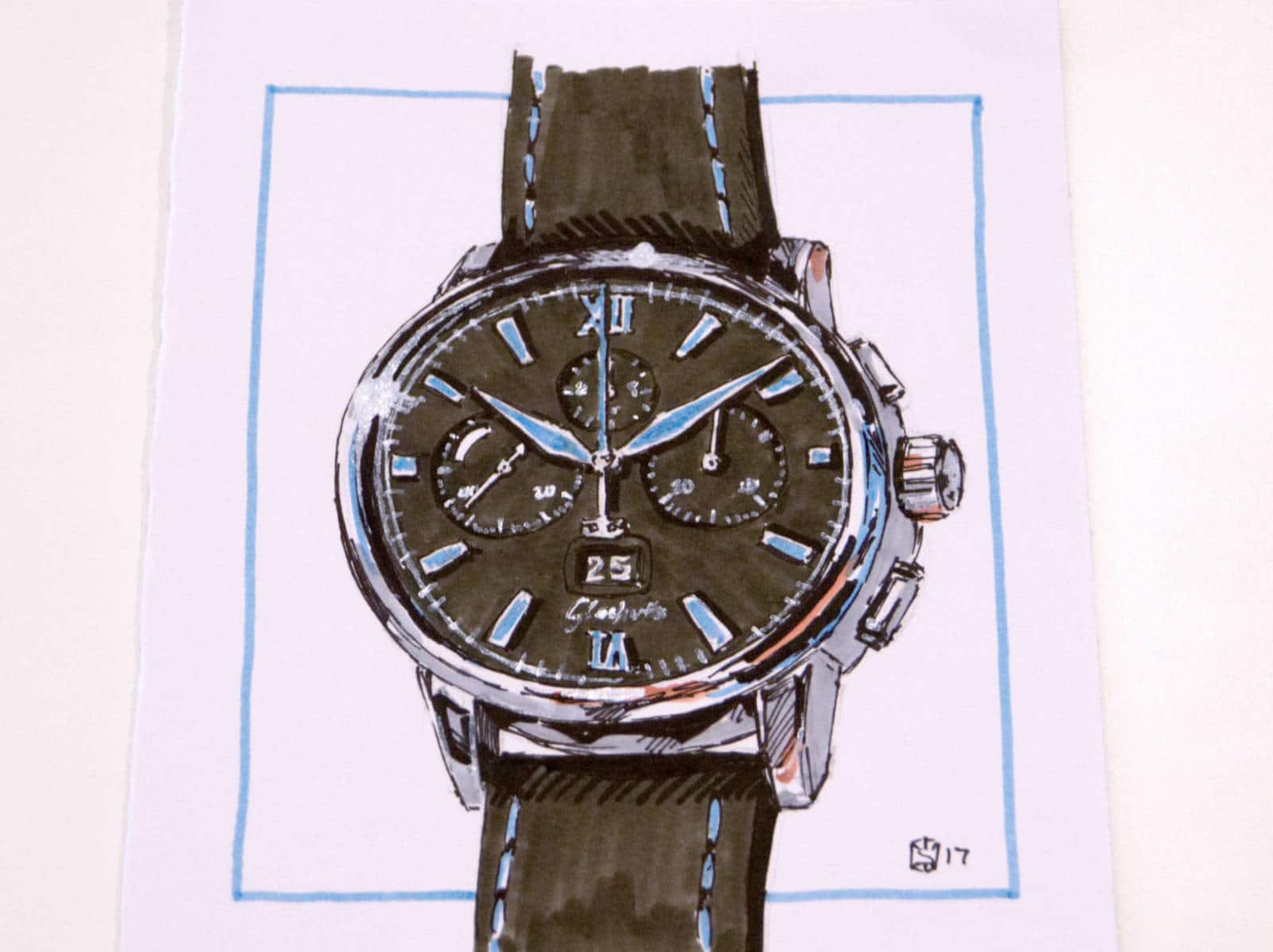 Drawing of a new Glashütte Original watch during Baselworld 2017 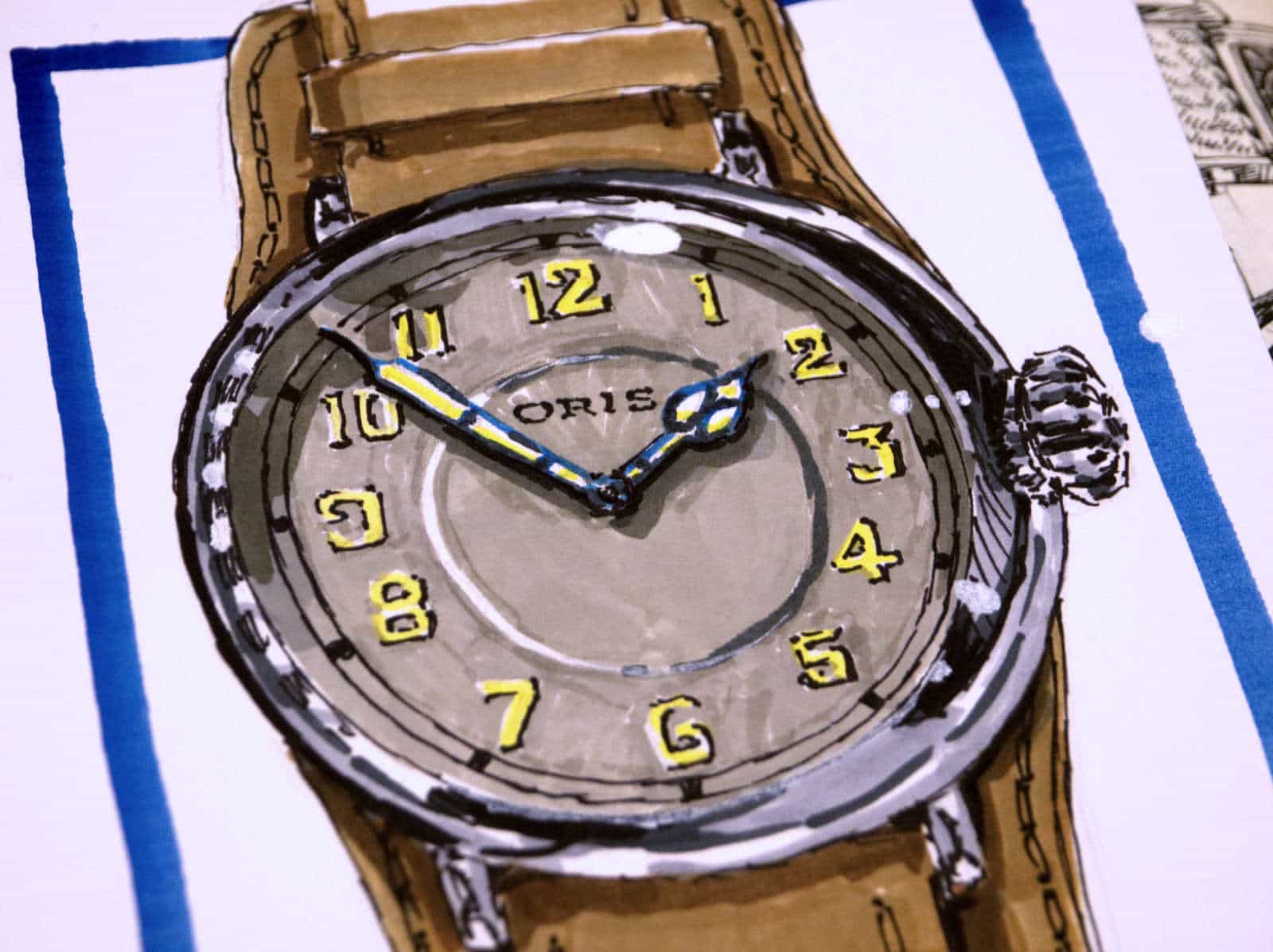 Besides the existing watches he likes creating own watches, interpretations and designs. For example, try to create an own interpretation of the Moonwatch. I recognize this drive to create something new. Sometimes he tries to put the watch in a story or situation. This extra bit of story-telling does add extra flavor to the whole visual spectacle and impression. 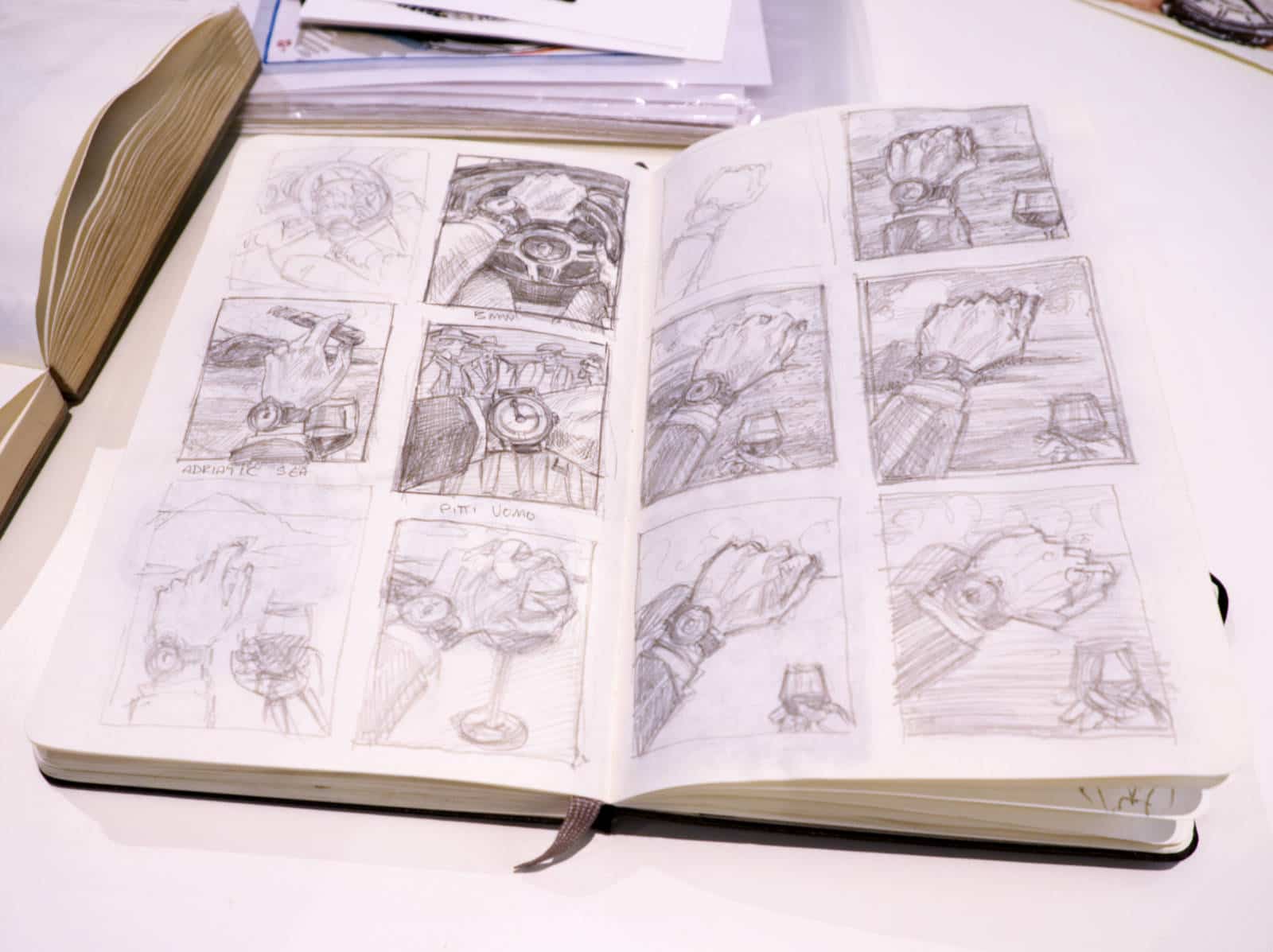 As we talked for a while, the sketch really started to look like a Speedmaster: 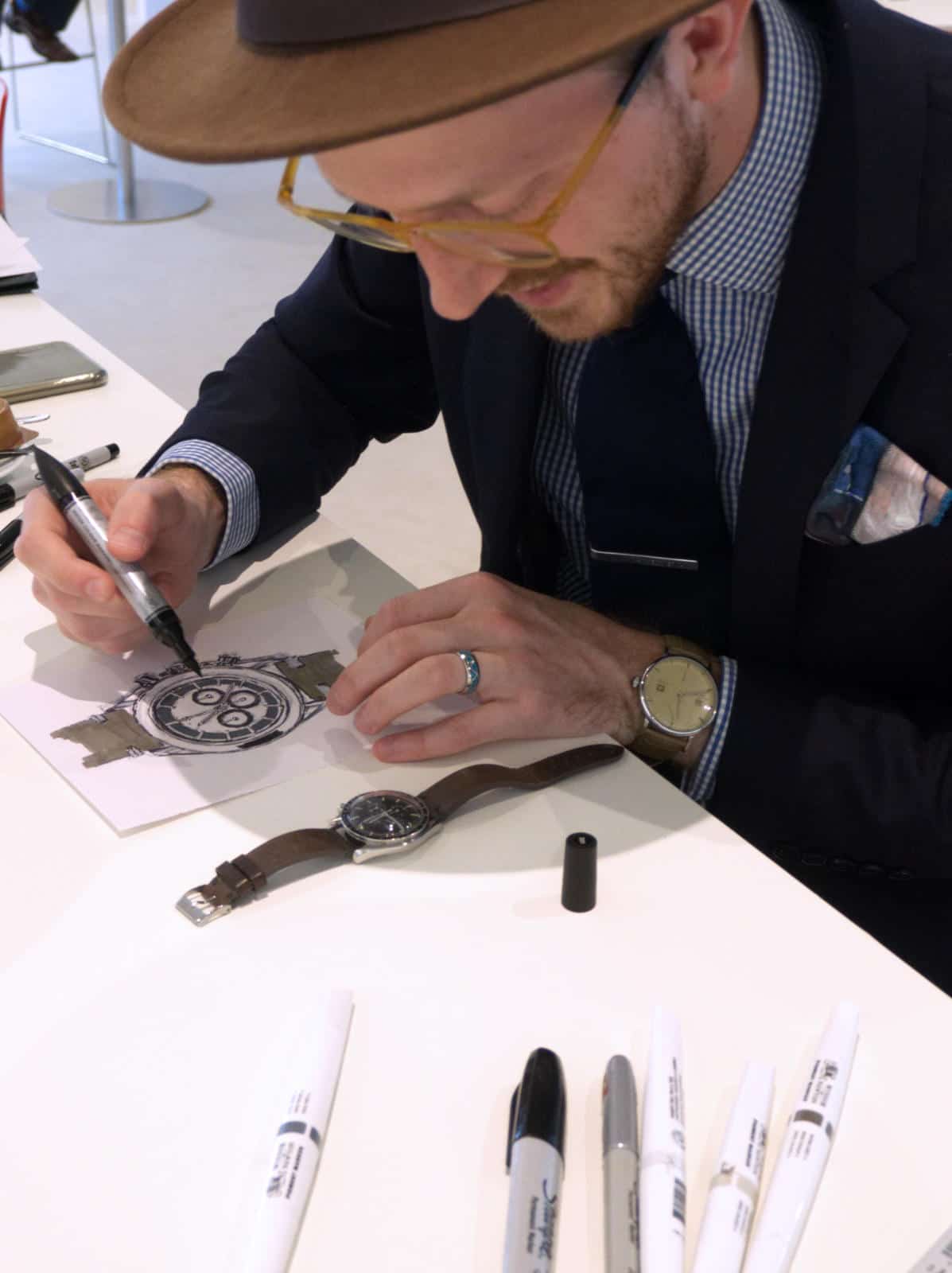 Most brands contact him for promotions or special occasions on social media. Some know exactly what they want, but most of the time Sunflowerman presents some quick pencil sketches. After the brand has picked a favorite he creates a more detailed sketch or two and then creates the final piece. Sometimes he involves his Instagram-followers into visual decisions. Some brands he has worked with are Hanhart, Longines and Oris. 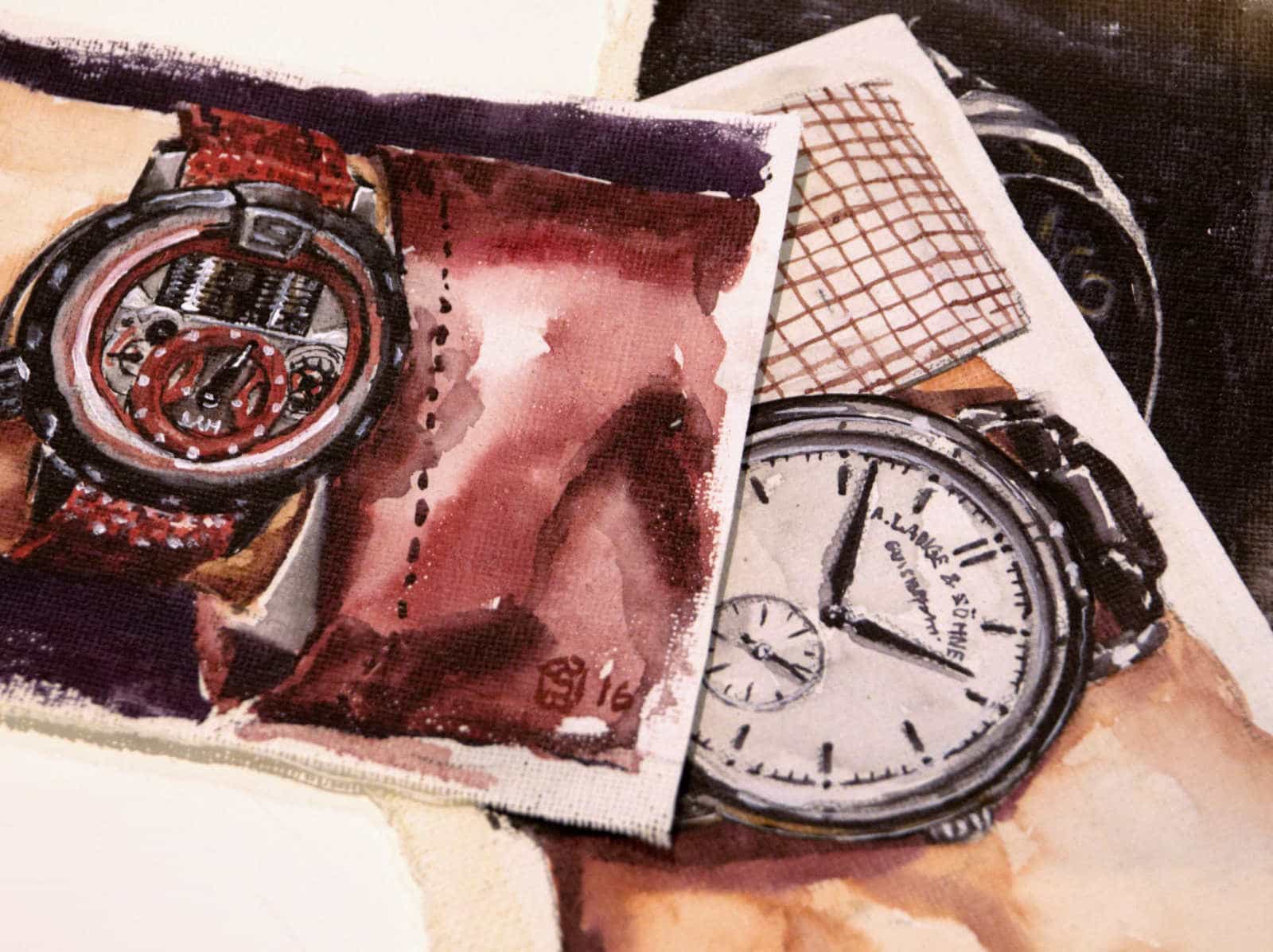 “I’m slowly developing my taste. I do like A. Lange and Söhne, Glashütte Original and Panerai. These are the ones I loved right away. Recently I discovered Cyrus, who have an incredible story and crazy complications behind them. By painting it I discovered real uncommon geometric design patterns. I also love the classic designs which Oris presented this BaselWorld.” 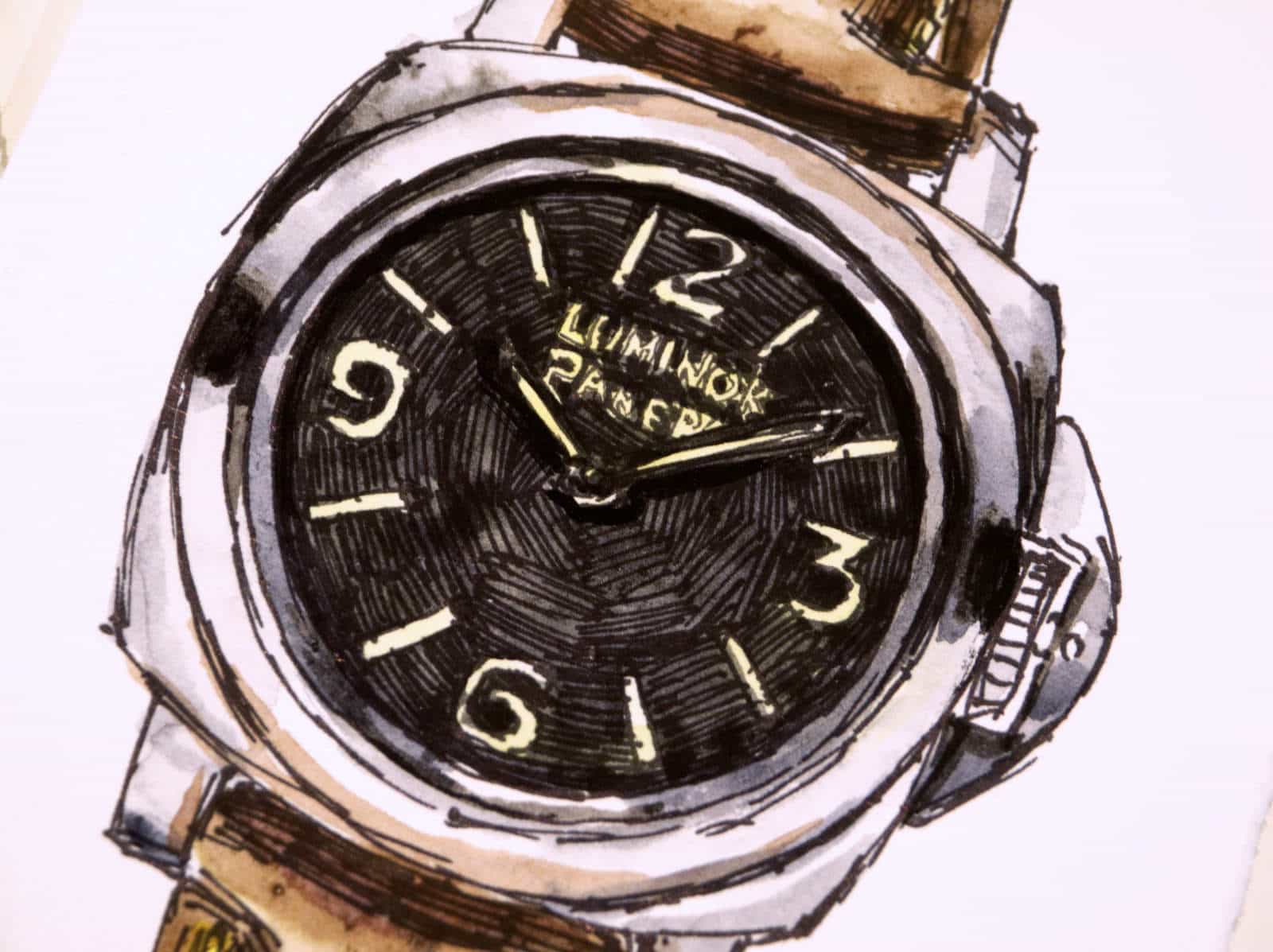 What do you think of creativity in the world of watches?

“It is fascinating to see that the watch brands can keep themselves alive while they aren’t that necessary anymore. How do you keep things interesting so that people will come back year after year? What story can you tell as a brand or who do you want to be? That demands on a lot of creativity. If we look at watches in general it’s quite magical and creative. Through time we’ve created a ‘thing’ that can display time. That’s just creativity in itself. Though some brands will have a difficult time in the coming years. People are increasingly looking for new designs, while the brands still use the designs of their ancestors.”

“I’m not a real big fan of Hublot but I like their eagerness to launch new concepts. Because of their actions they are also pulling other brands into experimenting. That’s a good thing in general and a foundation for new designs.” 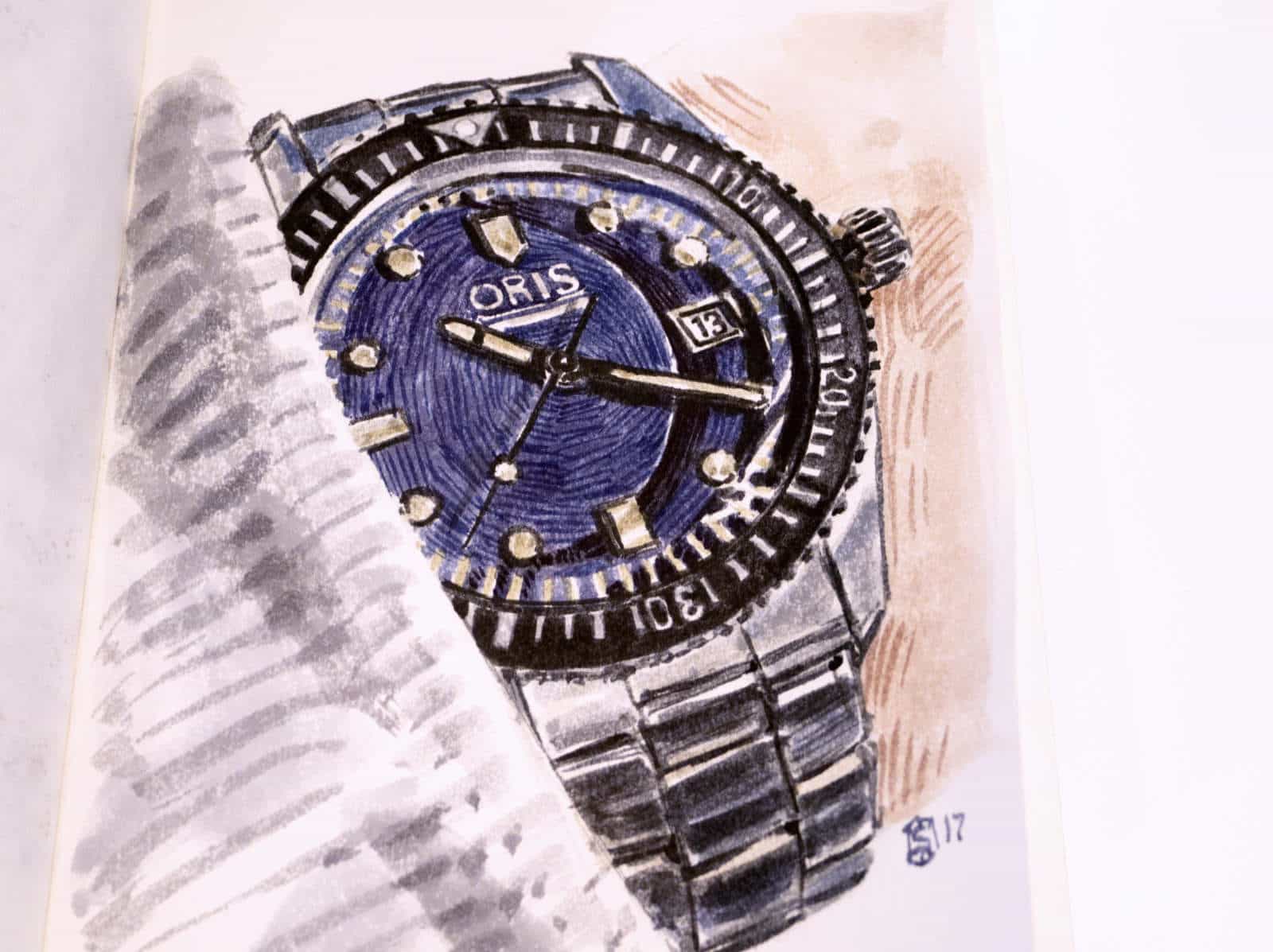 You just made a drawing of my Speedmaster. Is that a watch you like, from a design perspective?

“Yes, it’s probably the watch I’ve painted the most. Especially love the twisted lugs. It’s such a recognizable aspect. The design is just fantastic. I think the Speedmaster might have one of the most loyal fan crowds at the moment.”

We’ve also talked about possible collaborations or co-creative projects. There are quite a few ‘horological’ artists these days and it would be very cool to do something together. Upcoming months I will try to setup a network. 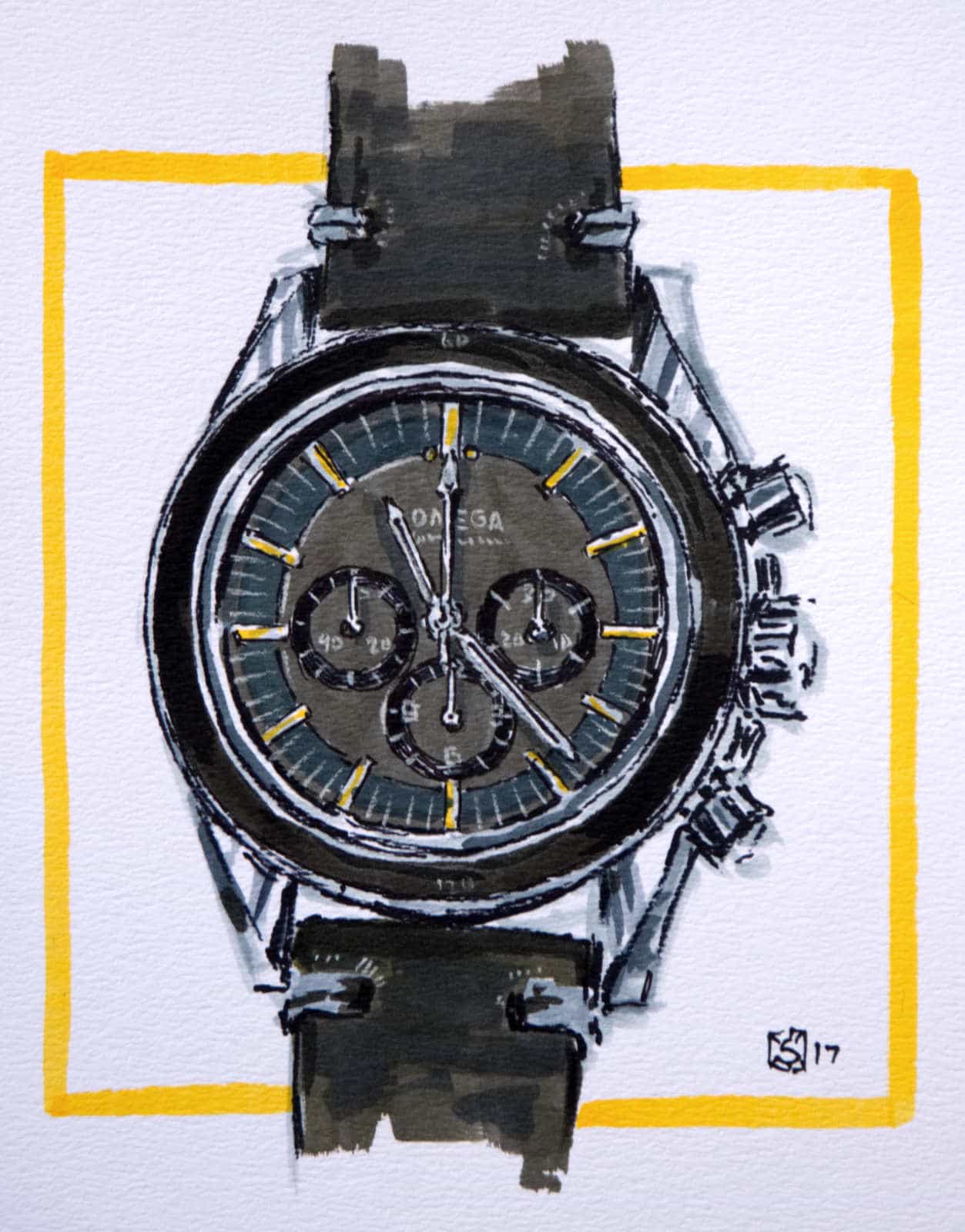 It was an inspiring meeting and it’s always nice to meet other creative people. What I really like about the style is the way Sunflowerman visualizes subjects a bit like the impressionists did around 1900. Stylizing parts, even leave unnecessary things away. Fluent and with a good eye for color. I really love the Speedmaster drawing he made for me. Simple, not too pretentious and with recognizable vital parts. Thank you and keep up the good work!