Can an age-old complication bring a sense of calm in modern times?
Sky Sit
comments 7
Share

A German watchmaker building its name around a concept of imprecise time telling seems like a rather interesting paradox. The company espouses a watch to “keep time in a highly intuitive manner”, a concept so successful that the brand’s tagline reads “The Single-hand Watch”. And who is famous for one-handed watches? MeisterSinger is. Today, we take look at the latest from this German brand — the chiming Bell Hora in its Black/Gold colorway.

Having thrived in the single-hand-watch niche for over 20 years with a myriad of offerings under its belt, MeisterSinger decided to soup up its early jump-hour model, the Salthora. The independent brand has modified the jump-hour mechanism and pulled a rare complication out of the bag in its stead. The result is the Red Dot Award-winning Bell Hora with the chiming Sonnerie au Passage complication. Now featuring a black dial with gold details, the Bell Hora is looking classier than ever before. 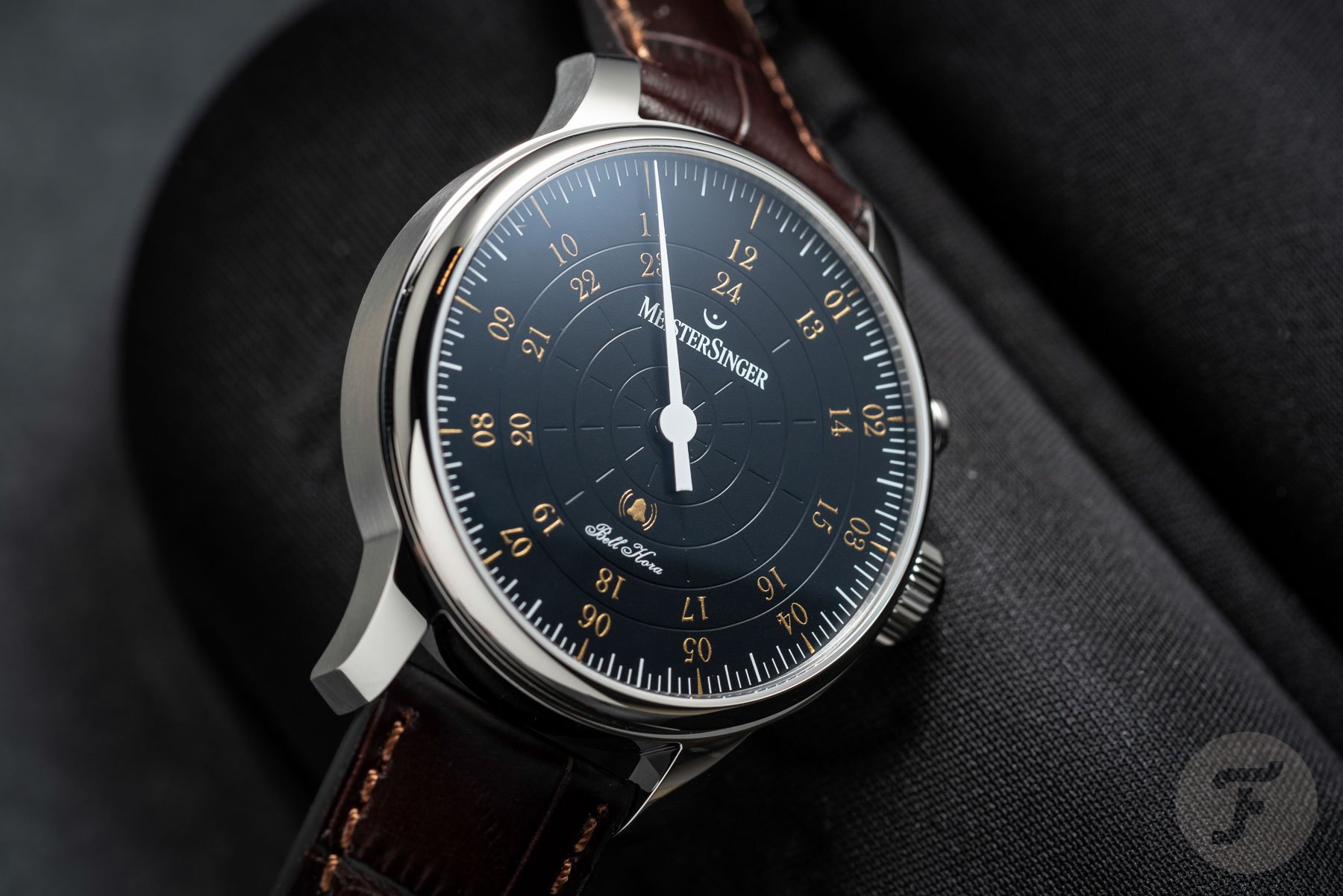 Single-hand watches might seem odd these days, as they do not tell you the exact time in minutes and seconds. But while these watches are quite uncommon in the 21st century, for hundreds of years, they were standard fare. The first mechanical pocket watches from the early 16th century indeed only had one hand to indicate time. It was sufficient for general timekeeping in those days, and most clocks and watches remained this way till the mid-1700s. We could nerd out on historical watchmaking to get a fascinating picture of how life once was, but I’ll leave that rabbit hole to your own leisure this time.

In essence, life in the old days wasn’t so frantic that people needed to count the minutes. It also wasn’t easy to read the time at night or in the dark before the advent of electricity. We all know grandfather clocks, tower clocks, and church bells toll the hour. That got translated to a chiming function in a pocket watch, aiding time-telling in low-light environments. 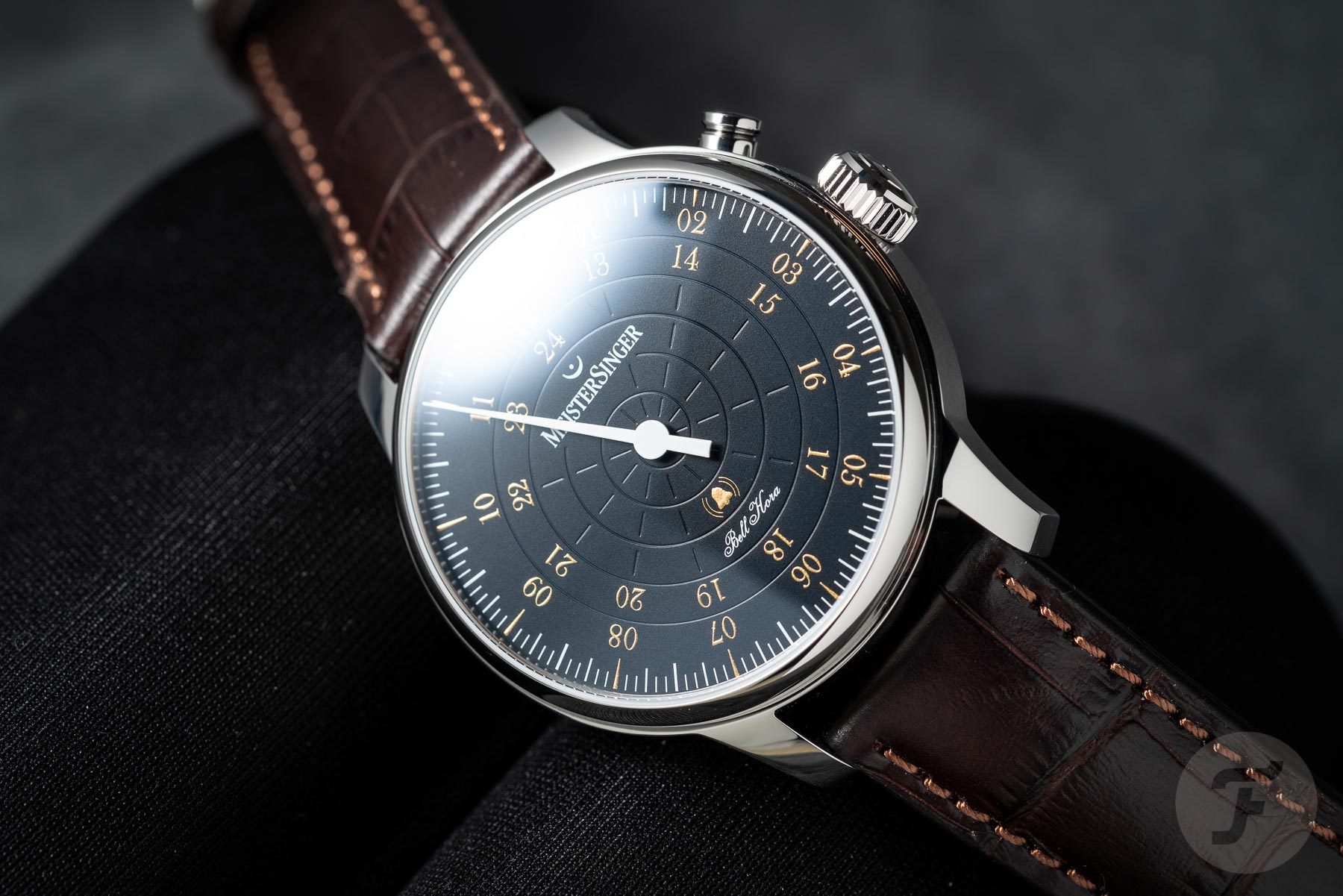 One way of producing the chime back then was the use of a Sonnerie au Passage in a watch mechanism. And that is what we find inside the Bell Hora. MeisterSinger has revived a “forgotten” complication that produces a gentle chime exactly on the hour.

The Bell Hora chimes a single note every 60 minutes as a soft reminder that another hour has begun. It nudges you to remember the passing of time without requiring you to look at the watch. The sound is pleasantly audible but remains unobtrusive. As such, it may get drowned out in certain noisy settings in our modern world. You can sample the chime via the sound file we shared in the Bell Hora hands-on review last year.

The hourly chime helps you keep time intuitively. That is exactly what MeisterSinger preaches. The brand designed the Bell Hora to be “neither an alarm nor a countdown. It does not interrupt the flow of time, but gives a broad, melodious backdrop.” 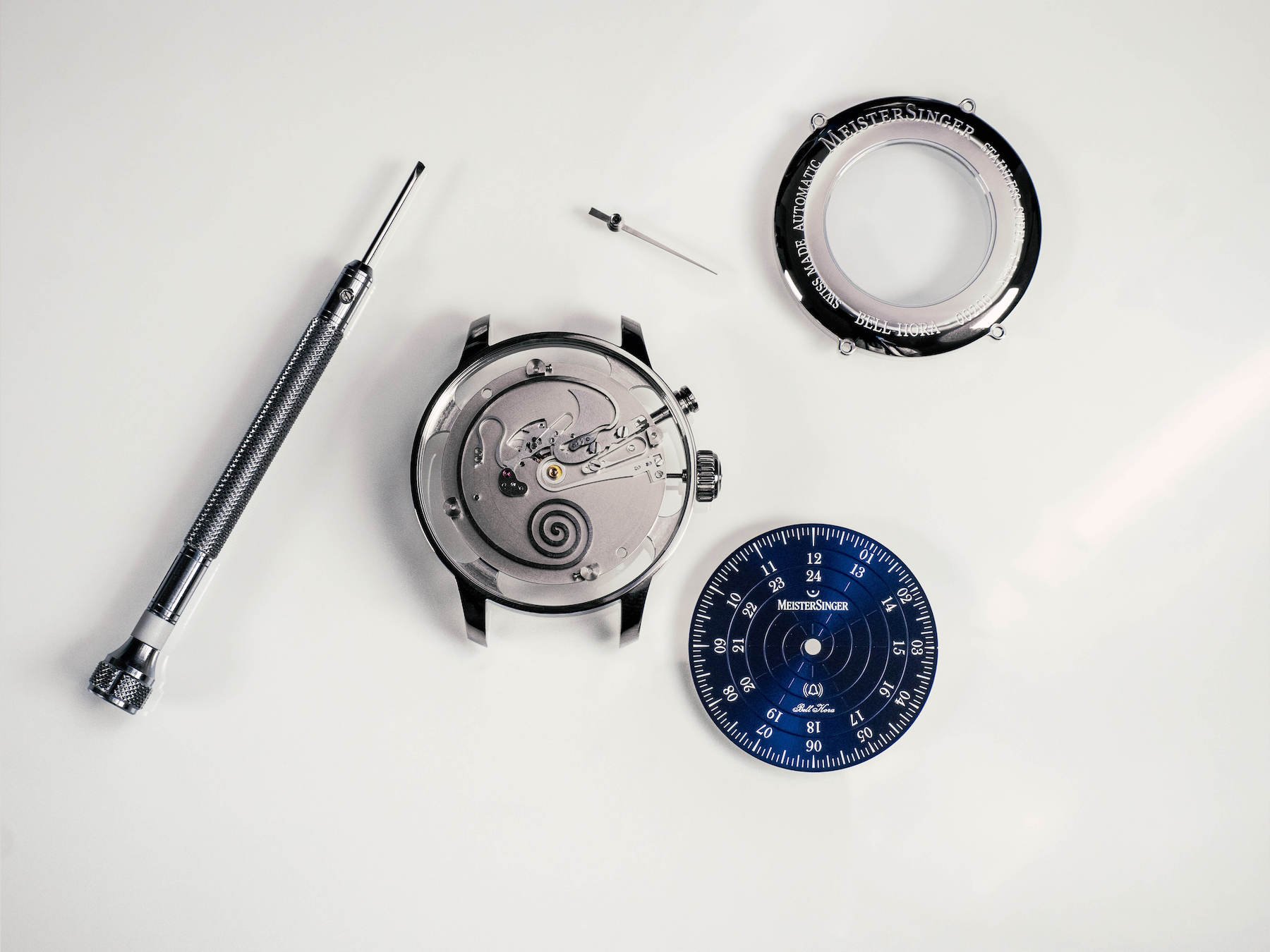 Mechanically, what MeisterSinger has proposed here is essentially a conversion of its jump-hour mechanism. The watchmaker has developed a Sonnerie au Passage module to add to the Swiss-made MS Bell automatic movement. The chiming complication is placed right below the dial on top of this Sellita-SW200-based caliber.

The module is connected to the movement’s minute wheel, gathering energy over the course of a full hour. When the new hour begins, the power built up in the Sonnerie au Passage is then released to strike against the sound fork to produce the chime. If you do not wish for the watch to chime, a small pusher at 2 o’clock lets you silence this function. A black ring around the shaft of the pusher indicates that the watch is in “quiet mode”. 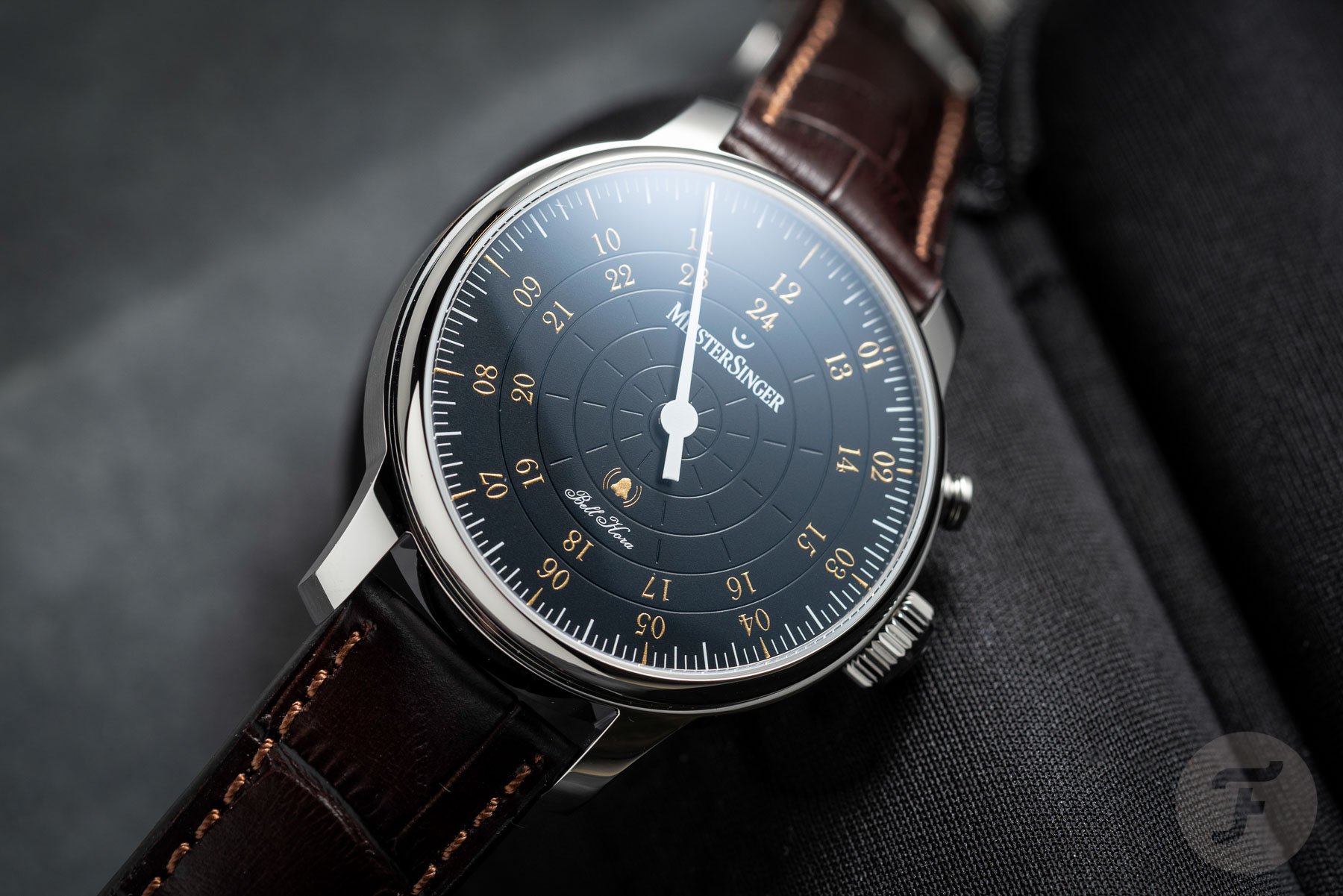 Hovering above the dial is the unmistakable MeisterSinger single hand. It is an ultra-long and slender triangle with its pointed tip reaching almost all the way to the edge of the dial, where the fine five-minute markings are printed. It may give the dial a stopwatch-like feel, but it is actually how it used to look in many of the first mechanical timepieces up to the 18th century.

True to its historical root, the Bell Hora hand comes without lume. It is, however, prominent enough to read with its bright white paint against a black backdrop. Equally legible are the minute markings and dial text, which are all in a high-contrast white. 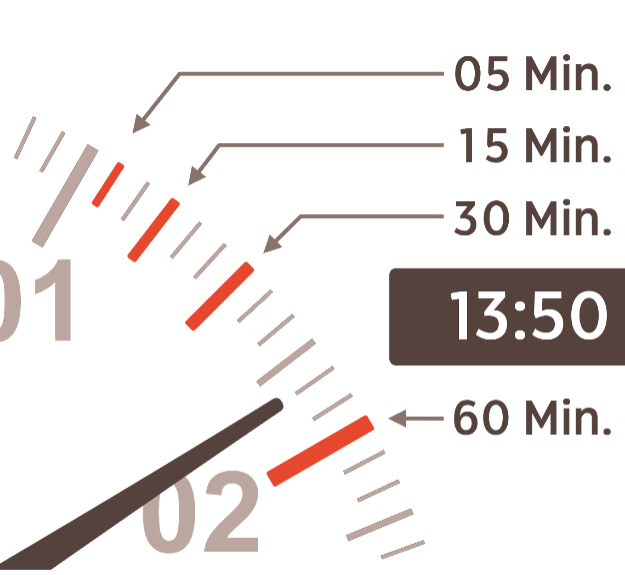 Time-reading happens in five-minute intervals, whereby an hour is divided up by 12 markers between hour indexes. You simply look at where the hand points to at any given moment and intuitively read the time where it lands.

From the center of the dial, a spiral is etched evenly all the way to the top of numeral 12. Running through the space between, perpendicular section lines are laid at each hour increment. These subtle dividers help align your vision with the position of the hand to gauge the time at a quick glance. 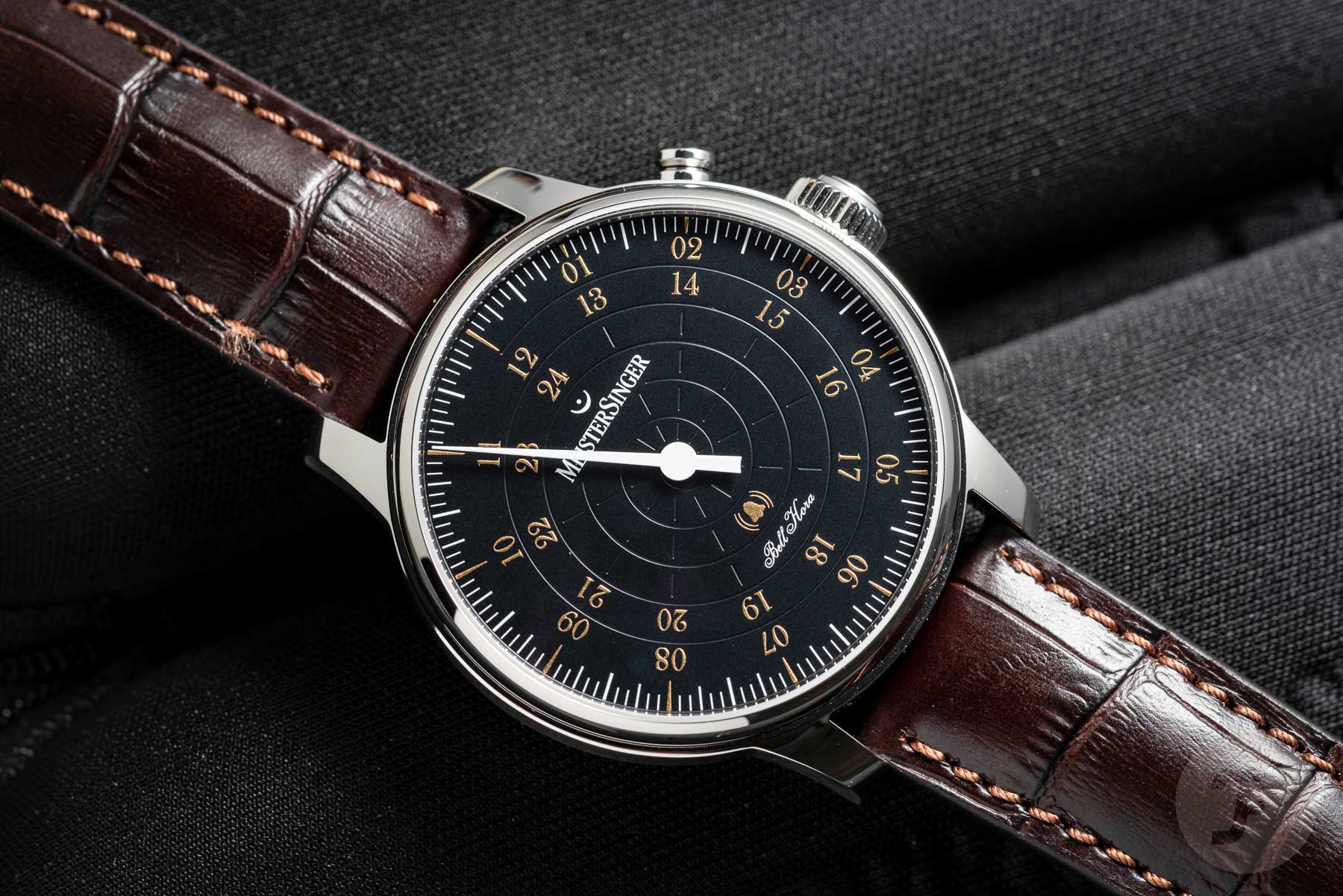 The Black/Gold version shares the same dial design as its predecessors except for the color scheme. It differentiates itself with a jet-black dial donning gold markings. This beautiful color contrast not only lifts the bell icon and the indexes from the background, but it also highlights the 24 hour indicators along the spiral.

The Bell Hora Black/Gold retains a 43mm stainless steel circular case, which is highly finished with polished and brushed surfaces. It is fitted with sapphire glass on both the front and the back and reveals the Sellita-based MS Bell caliber with a branded rotor and a 38-hour power reserve. 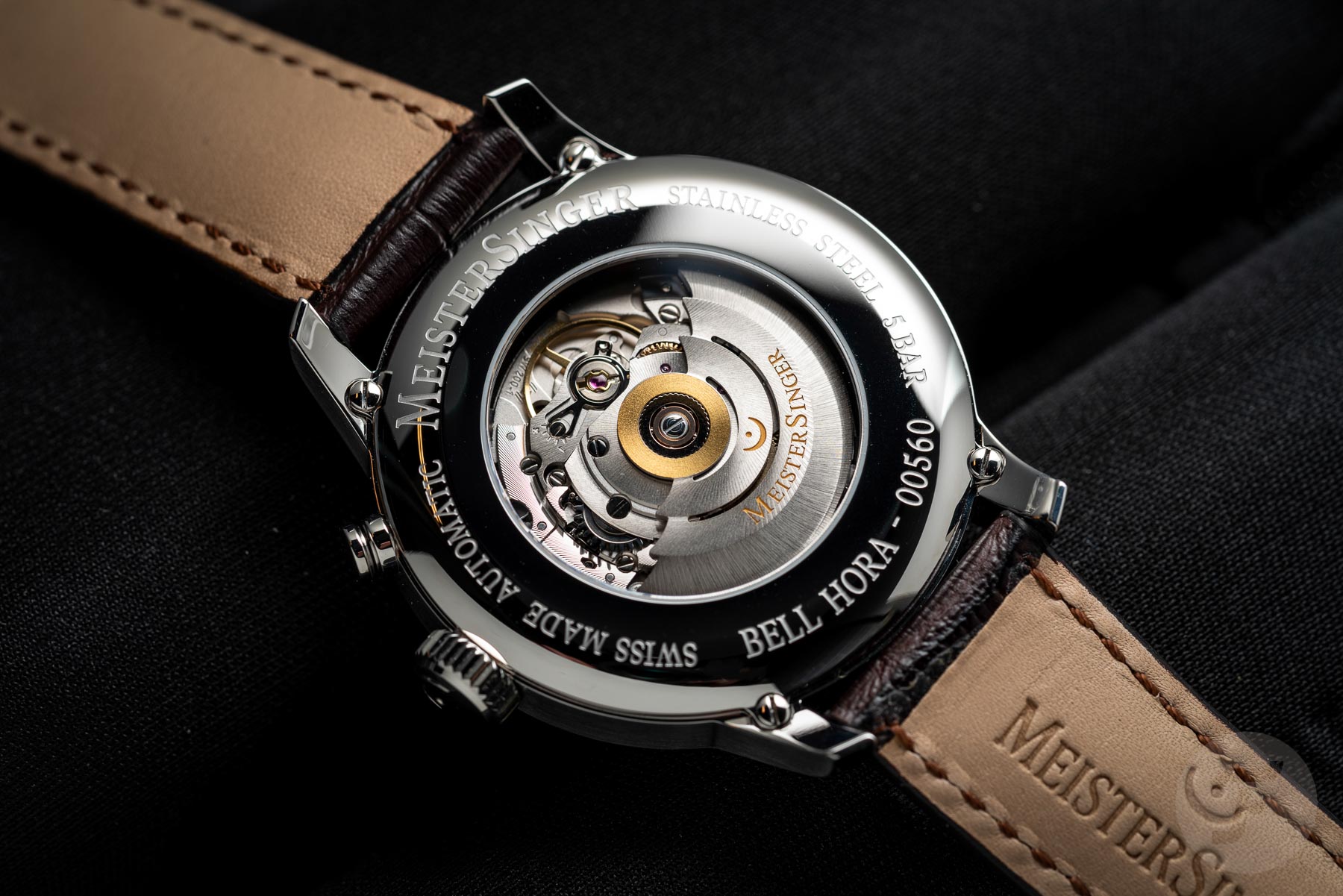 While you cannot see the mechanical magic of the complication inside, you can certainly try imagining it given the 13mm case height. Naturally, this watch is never going to suit me. Even for a fairly sizable wrist, the watch is substantial, and there are no two ways about it. The saving grace, however, is that the lugs do curve downwards. This may help the Bell Hora to wrap around your wrist with its dark brown crocodile-grain calfskin strap. 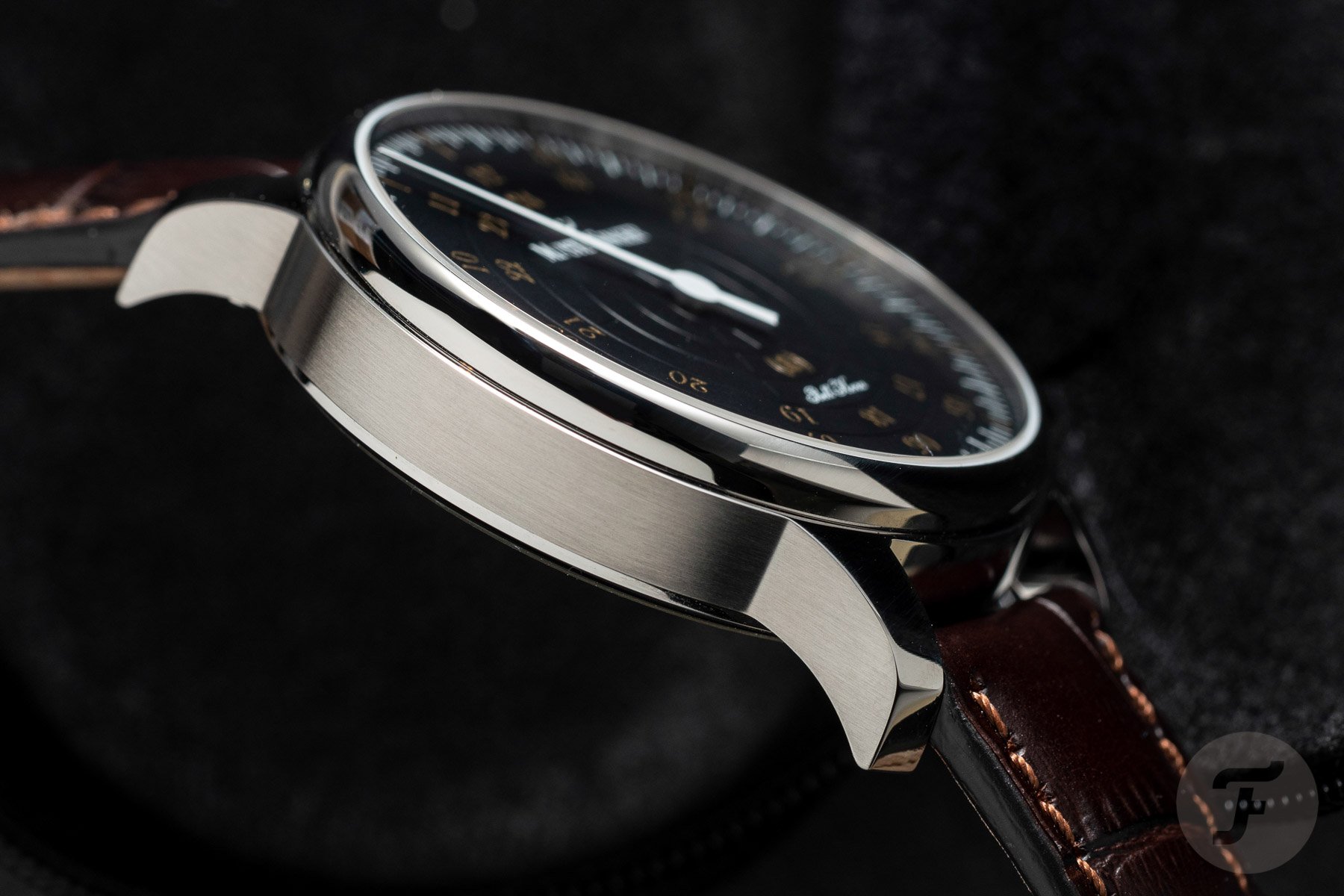 The Bell Hora Black/Gold will set you back €3,690, which is by no means a small price tag. But as any watch crossing my path with the “Sonnerie” name, I expected a figure way higher than what MeisterSinger is able to offer. After a decent look at the watch, I have to say the value proposition here is pretty impressive.

Can an age-old complication bring a sense of calm in modern times?

As with any MeisterSinger single-hand watch, one can get philosophical about “feeling time” with intuition or slowing time by not counting every minute. For me, the Bell Hora simply chimes with my rhythm in a practical sense. Maybe I have become less time-hungry after two years of reduced mobility, but registering the hour is enough for me to keep my day in check. I still live by the calendar. But within the hour slot, I don’t stress about the minutes. I absolutely love a gentle bell that softly rings only once every hour. It’s such a calm way of noting the passage of time.

For more information on the Bell Hora, visit the MeisterSinger website.