I can hardly believe it has already been 20 years since MeisterSinger entered the stage with something completely different. The MeisterSinger No.1 — a pretty good name for a first watch — only had one hand. With this hand, you’re able to tell both the hours and minutes. Using 144 indexes on the dial, you can read the time more accurately than you’d think. Every 5-minute interval has its own marking, so you’re only ever just a few minutes off at best. 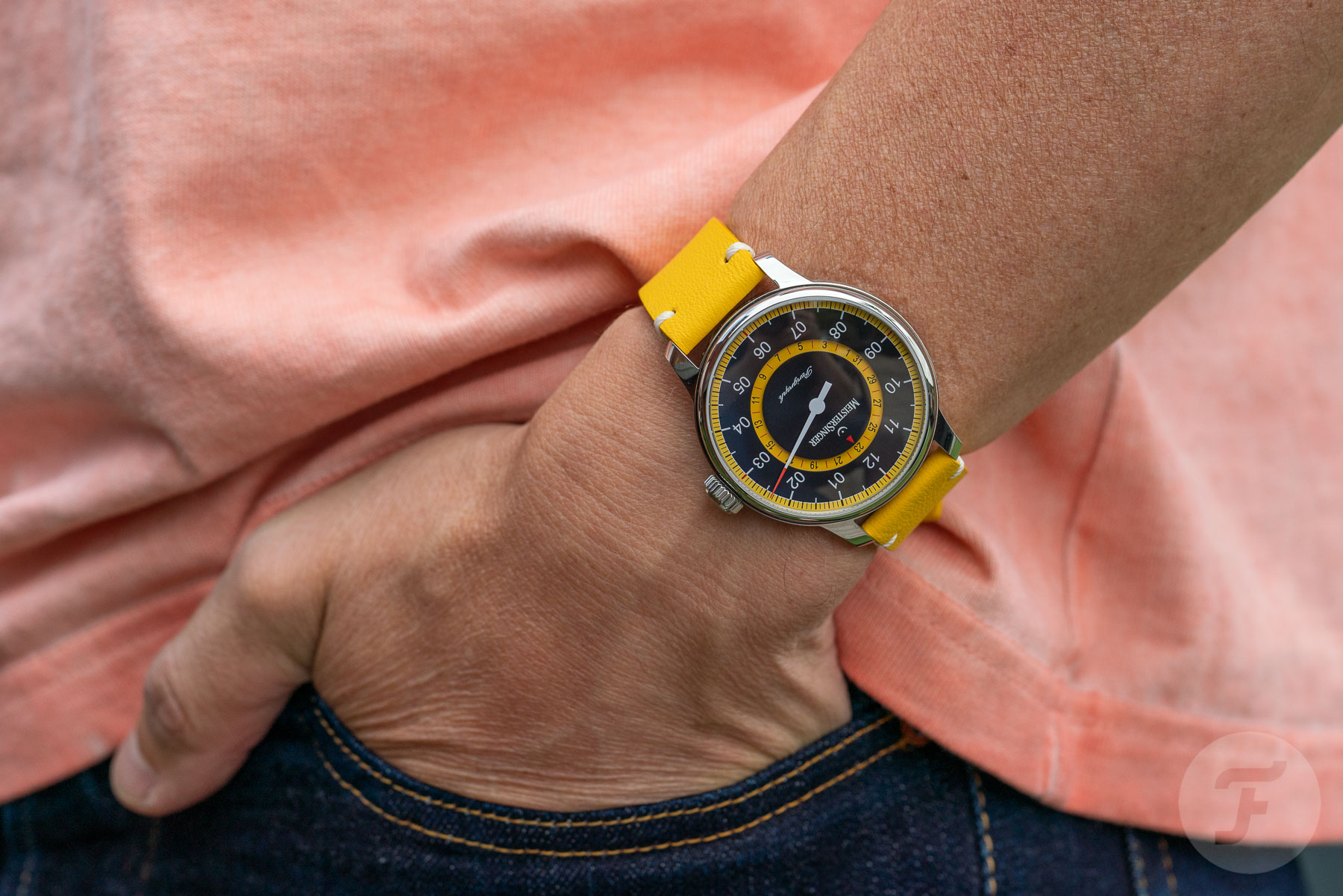 Although it doesn’t seem like that long ago that Manfred Brassler introduced the MeisterSinger No. 1, the one-hand watch has become world-renown and even gone on to win many prizes, including the Red Dot Design Award for the Perigraph we will be looking at today. One of the ideas behind MeisterSinger was to come up with watches that would stand out from the crowd, something which they have certainly accomplished. 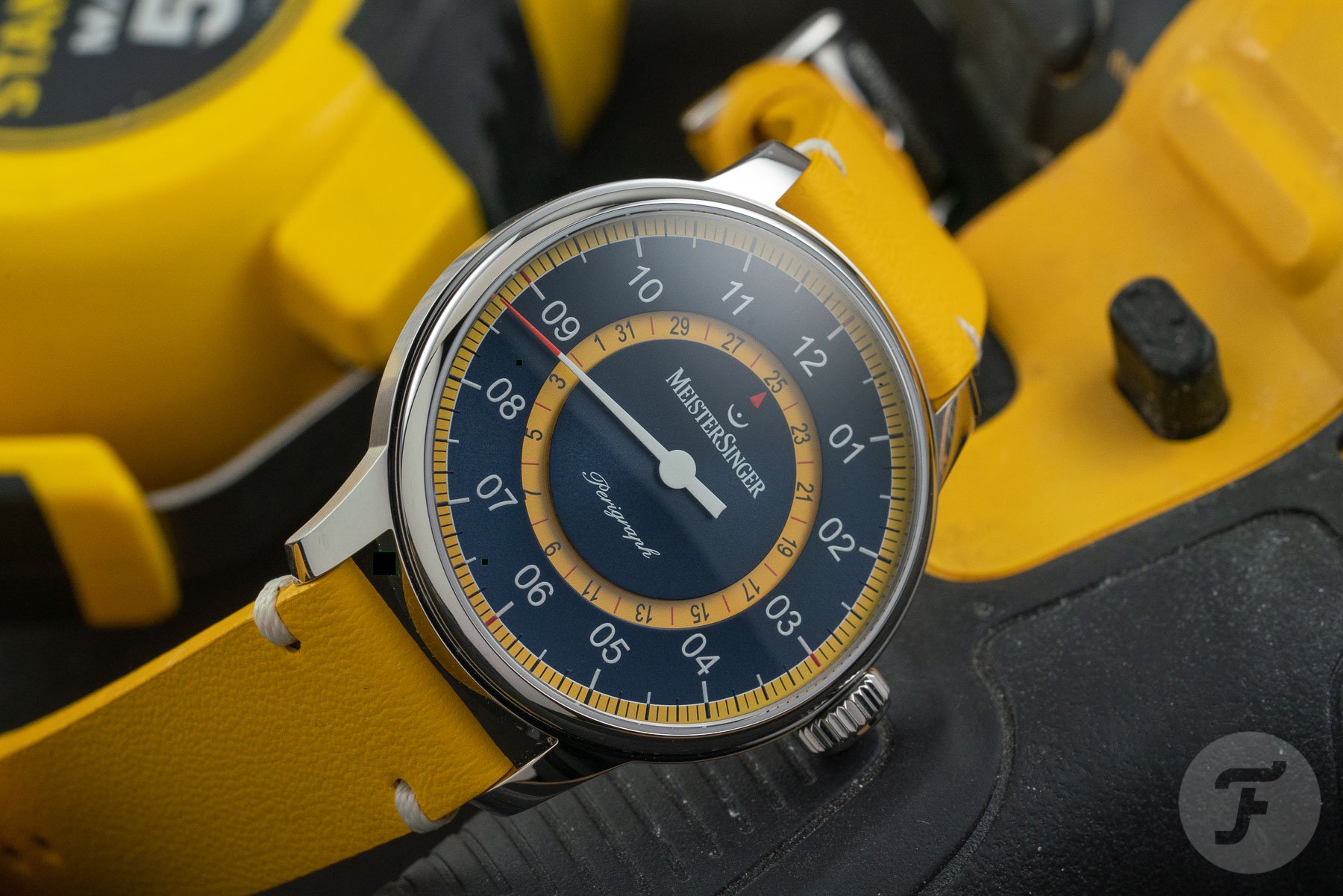 Indicating time with just one hand isn’t new, or even 20 years old. It goes way back. Up until the mid-18th century, clocks had just one hand to indicate the time. But this article isn’t a history lesson, and being a watch enthusiast yourself, I am sure you are already aware of the MeisterSinger brand. So let’s have a closer look at the MeisterSinger Perigraph Mellow Yellow, commemorating the company’s 20th anniversary. 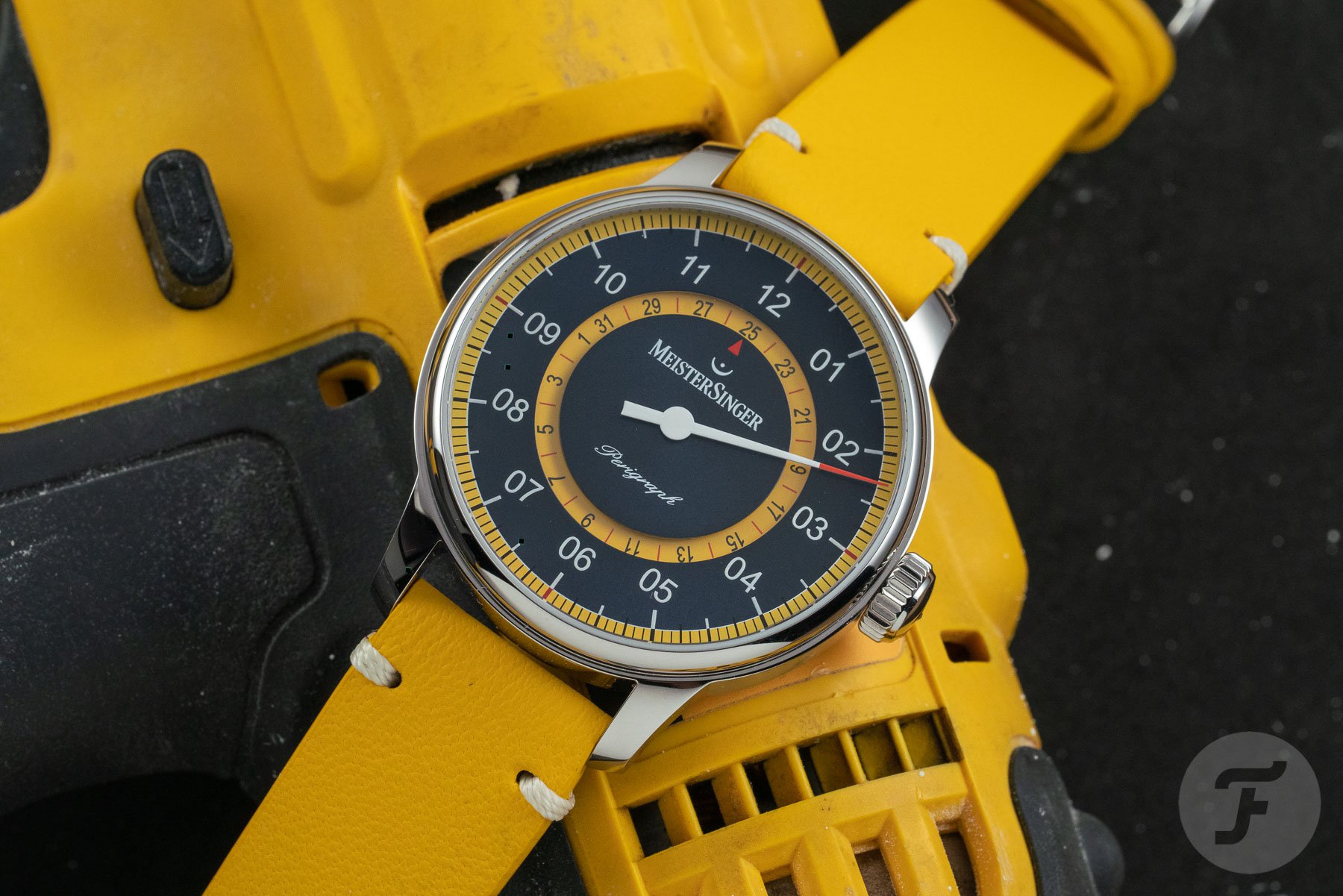 Unboxing this MeisterSinger Perigraph had me quite excited, as the watch that I had seen in the press images had definitely caught my eye. MeisterSinger used a (Technics?) turntable as a prop for the images, and that gets bonus points in my book. Unfortunately, the lack of a Technics SL1200 in the office, as well as not actually owning the Mellow Yellow song on vinyl, had me starting up Spotify and playing the song with which this watch shares its name. Quite quickly, the catchy tune was interrupted by debates and discussions which quickly started here in the office, both over the watch as well as the song’s origins. But let’s not go there. 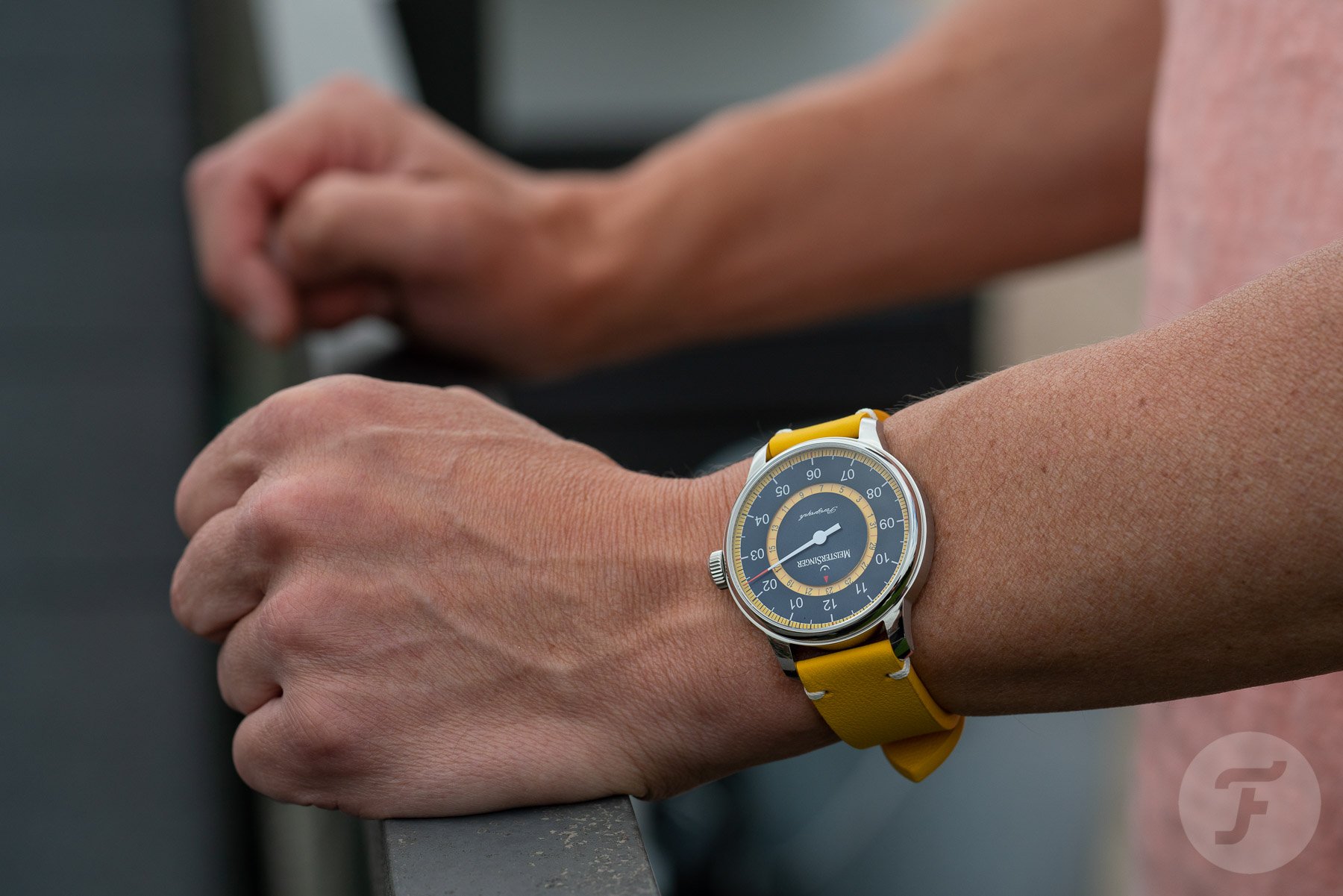 Can you pull it off?

My first thought upon opening the box was that this watch certainly has a lot of yellow, but is perhaps not all that mellow. But, as is often the case, you need to get it out of the box and onto your wrist to be able to make a proper judgment. And there, it makes its transformation from yellow to mellow yellow. 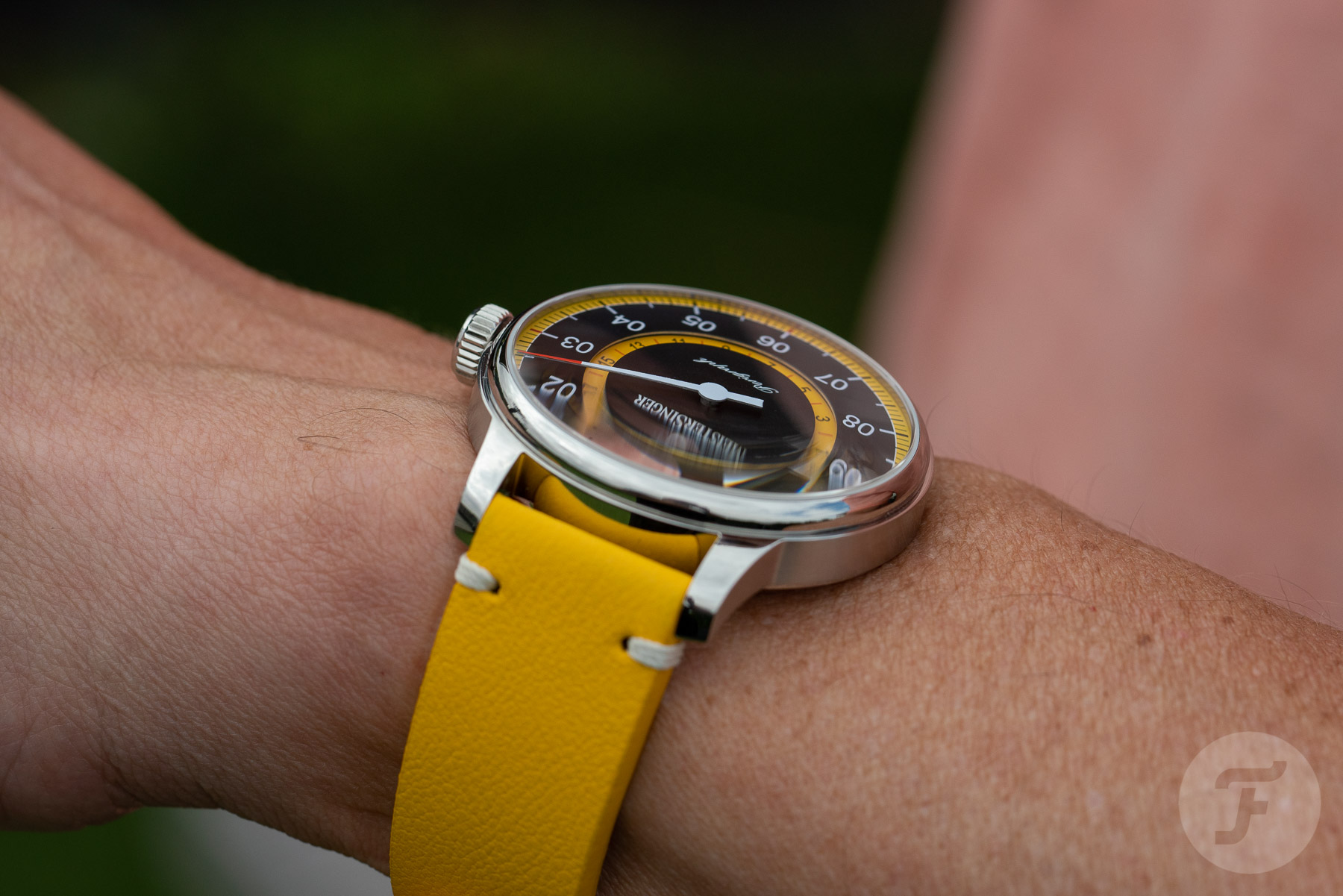 The watch has an undeniably cool look, and thanks to the color combination chosen by MeisterSinger, there’s definitely something laid-back and summery about having it on the wrist. You need to have a little bit of that “Idgaf” attitude to pull this one off, as it is certainly on the brighter side. It’s not a watch for those that wish to about their day unnoticed. 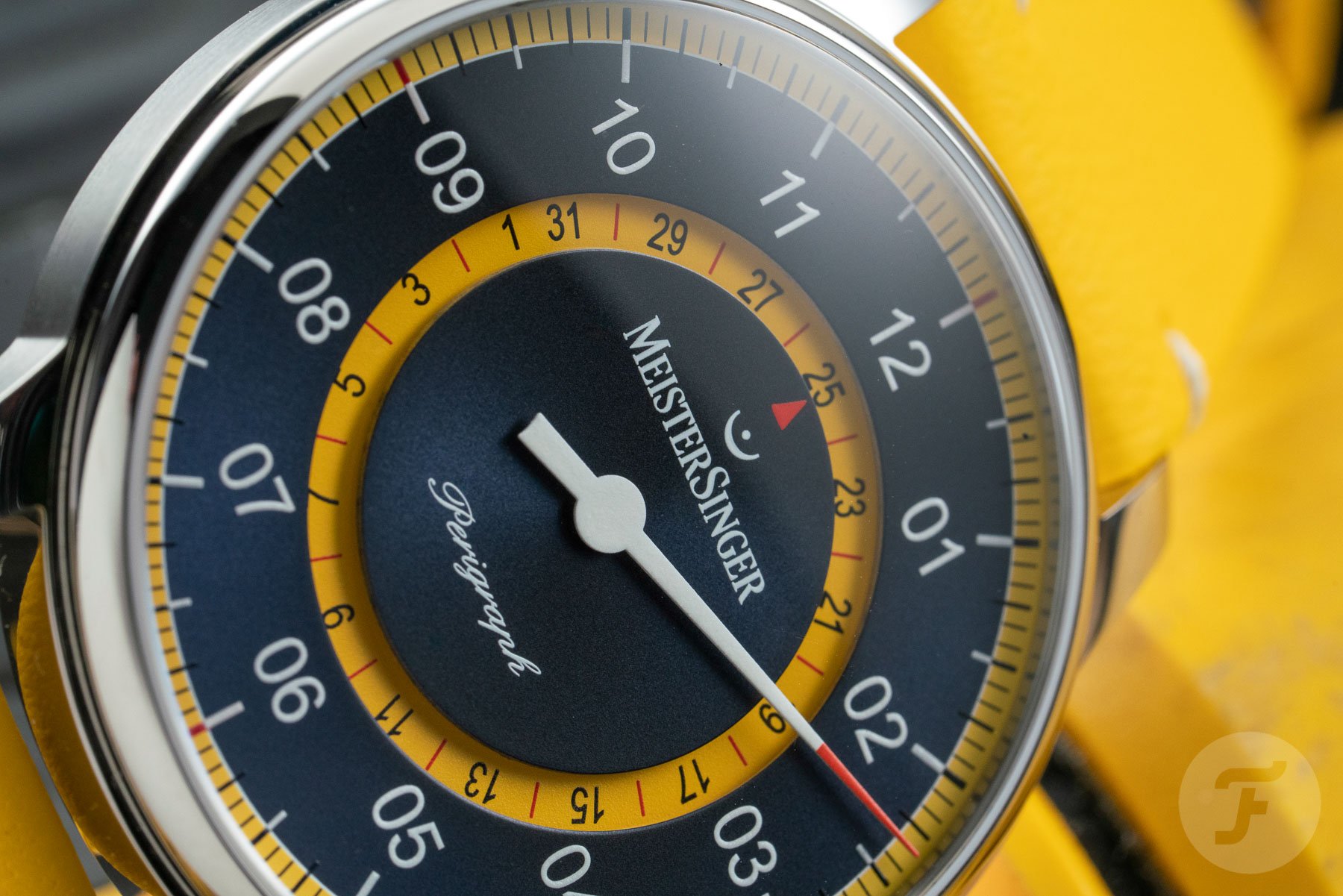 This MeisterSinger Perigraph Mellow Yellow has a large dial, thanks to the thin “bezel” of the case surrounding it. Most of the dial is this beautiful dark blue color with a sunburst finish. MeisterSinger refers to it as “steel-blue”. However, when compared to BMW’s colors it is more similar to their “Midnight blue” than the car manufacturer’s “Steel blue” metallic color. Then, there are two yellow sections on the dial. One is for the time and features 144 indices as previously mentioned, and the other is for the date indicator. All text and markings on the dial are either black and red (on the yellow sections) or white (on the blue sections). 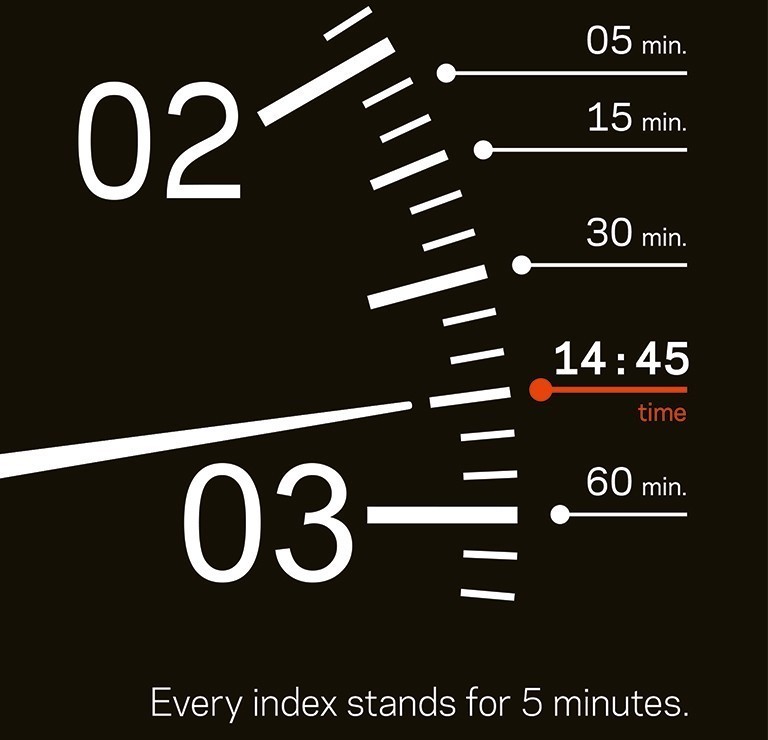 Red is also used in the date display of the watch. A small red arrow at the 12 o’clock position points out the current date on the rotating yellow date ring. Pull the crown out to the first position, and you can wind the watch manually, pull it to the second position and you can select the date, and finally, in the third position, you can set the time. The crown is large enough to allow you to do this comfortably and without it feeling cheap or fiddly. 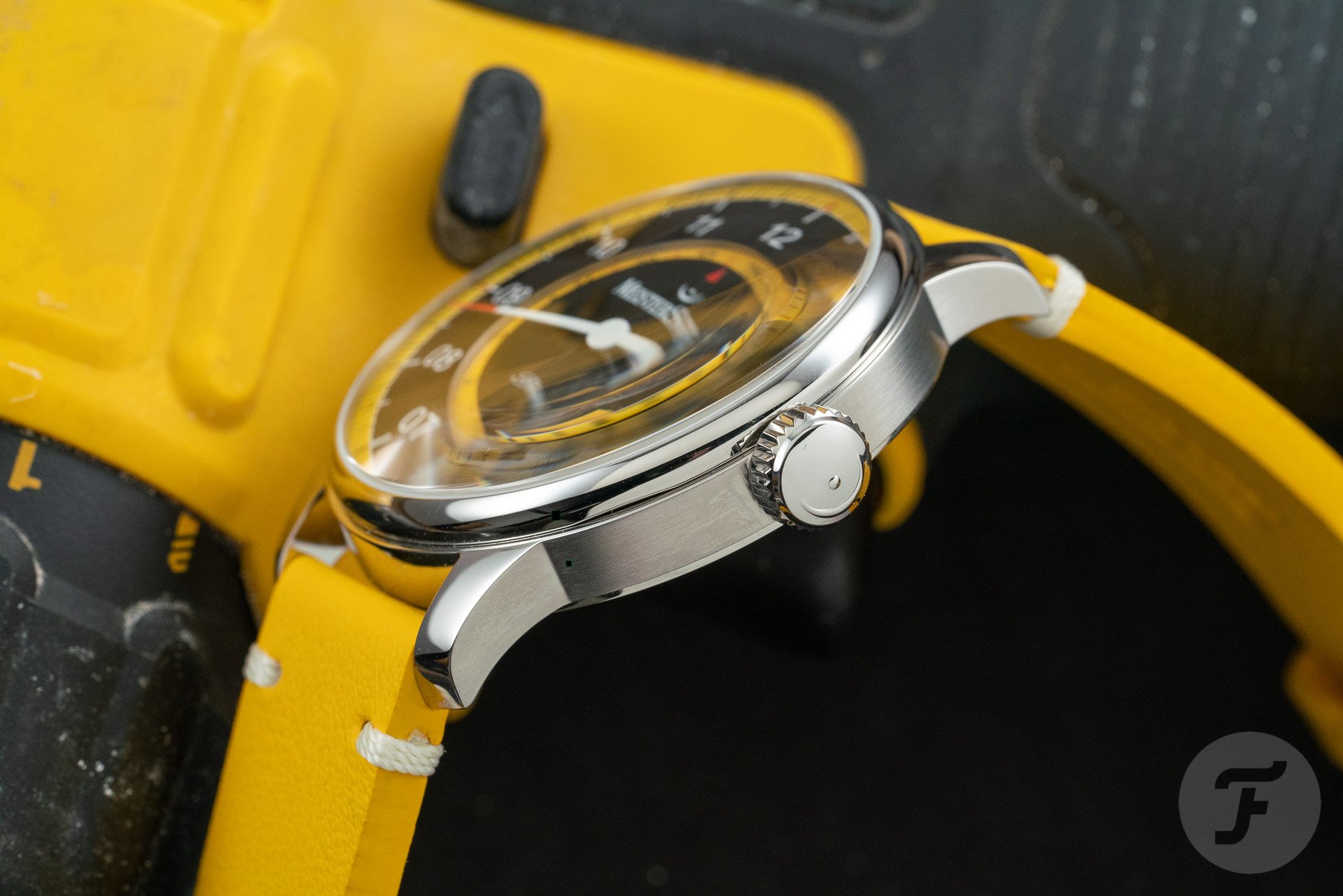 Case dimensions of the MeisterSinger Perigraph

The 43mm case diameter feels perfect for my 19cm wrist, but as we all know, it’s the lug-to-lug size that really matters these days. This measurement comes in at 51mm for the MeisterSinger Perigraph. For my wrist, the lug-to-lug dimension also does not represent an issue, but it could prove to be a little bit on the larger side for those with a smaller wrist. Despite its size, the MeisterSinger Perigraph wears quite comfortably on the wrist, mostly thanks to its rather modest case thickness of just 11.5mm. The lug width is 20mm and the comfortable, 4mm thick leather strap tapers down to 18mm. The matching yellow strap is fitted with a MeisterSinger pin buckle and has the well-known vintage two-stitch finishing at the ends. 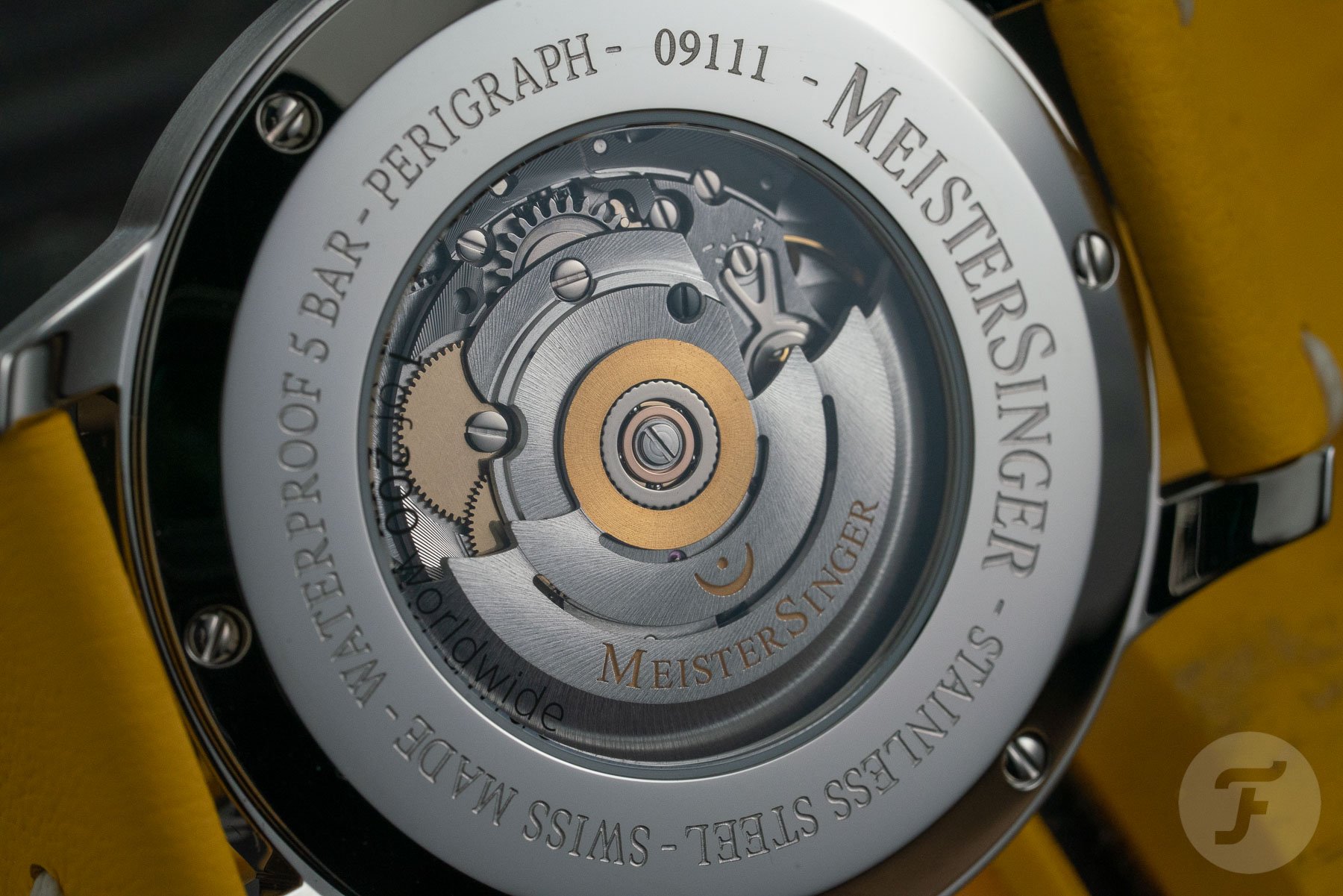 The MeisterSinger Perigraph Mellow Yellow has a water resistance of 5 bar. Nothing to write home about, but one that makes perfect sense for this watch. Inside the watch, we find a self-winding caliber based on the Sellita SW 200-1 movement. It ticks at 28,800vph and has a power reserve of approximately 38 hours. The rotor is customized with engraved text which reads “1 of 200 worldwide” and, of course, a gold-filled MeisterSinger logo. All of this is visible through the display case back, which is securely fitted to the case with 6 screws. 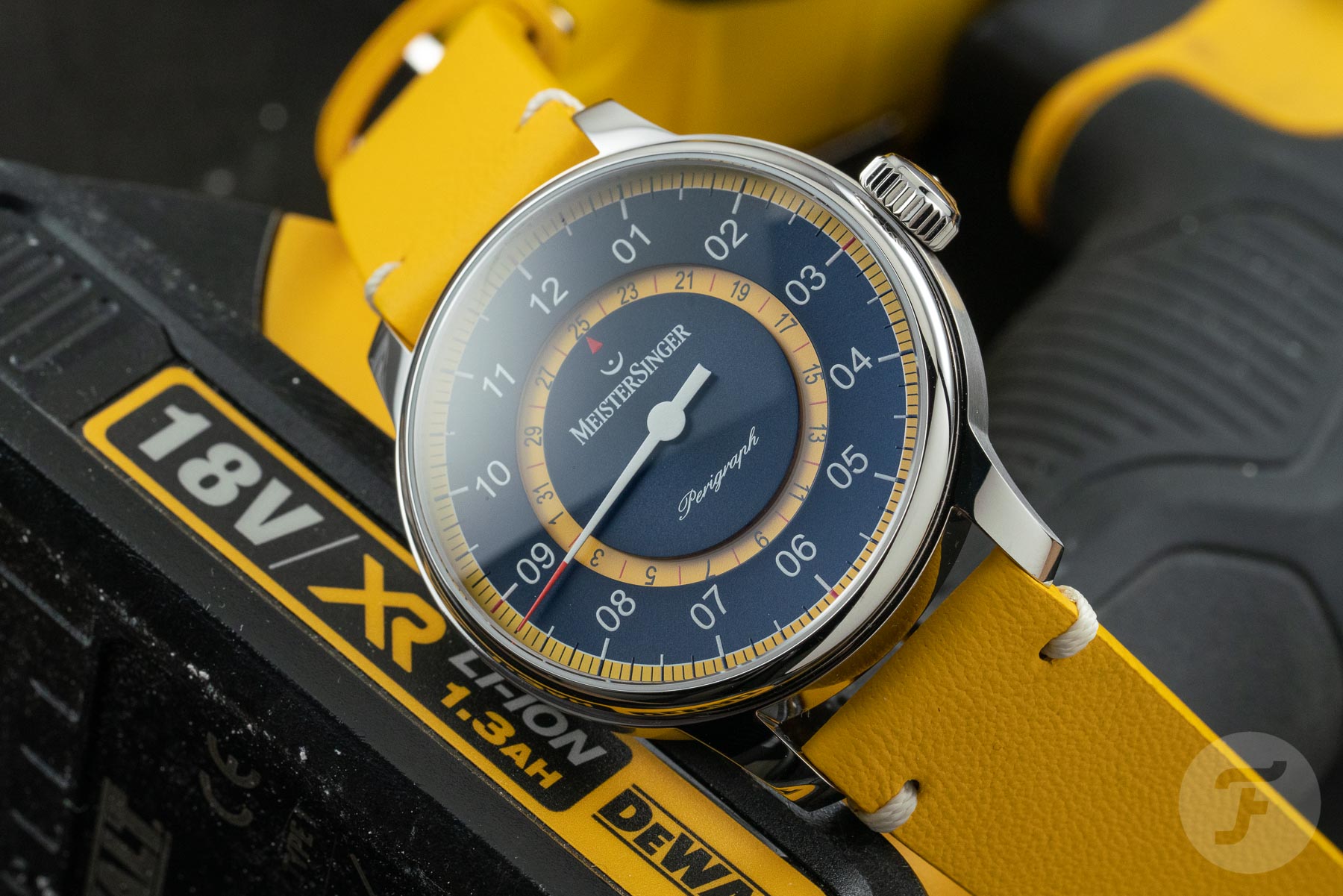 The MeisterSinger Perigraph Mellow Yellow is a limited edition of only 200 pieces worldwide. Not individually numbered, but indicated by the “1 of 200” engraving. I imagine that they will sell out rather quickly, as this watch offers something quite different from what’s already out there. Both in terms of indicating the time but also most definitely when it comes down to color combinations. 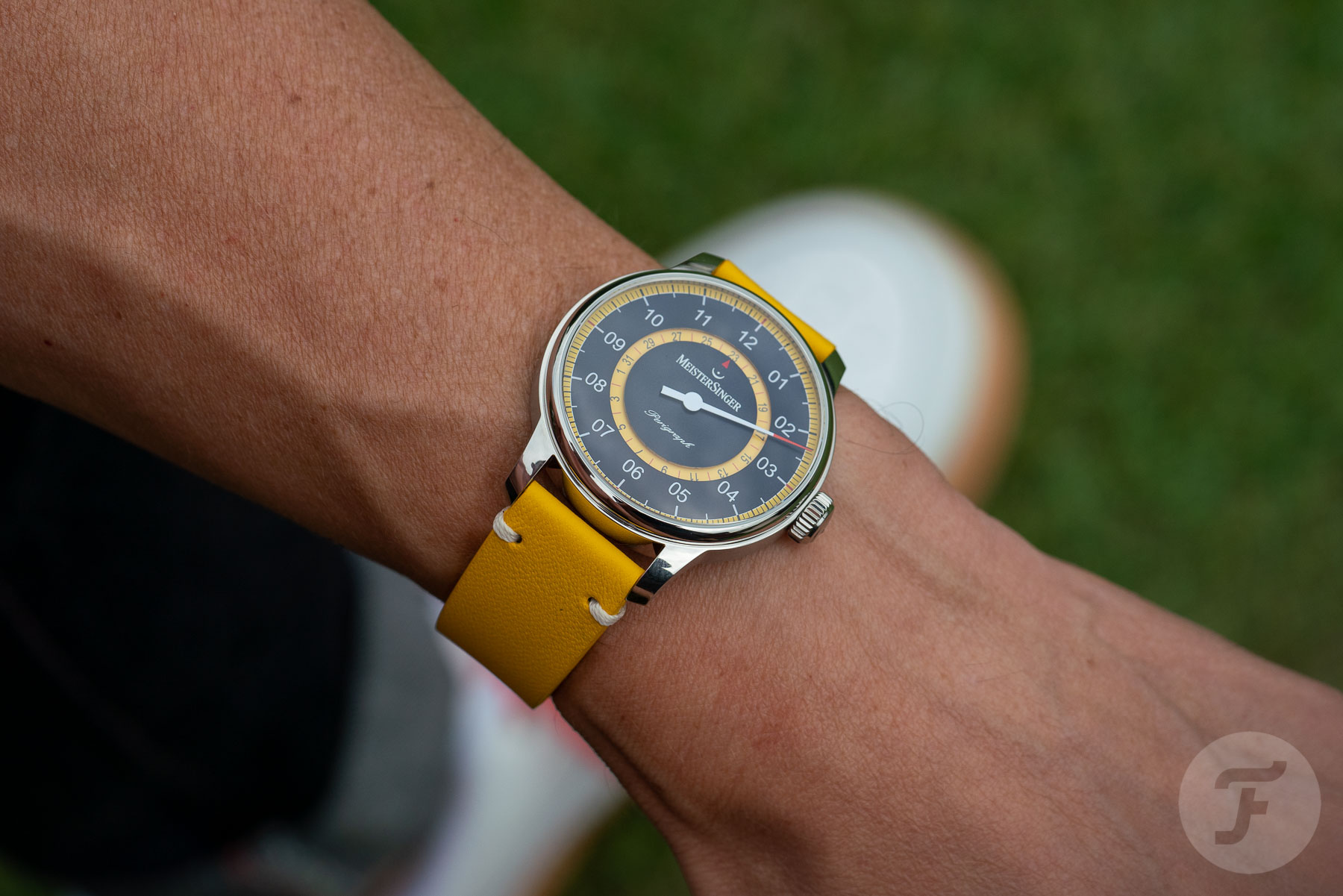 Interestingly, MeisterSinger has decided to offer it via its brick-and-mortar retailers first, before offering it for sale online. I assume they allocated a certain amount to either sales channel. The Perigraph Mellow Yellow is available through physical retail already, but only available for purchase online in September. The retail price of the MeisterSinger Perigraph Mellow Yellow is €1,790. For more information, visit their website here.