And it’s not a limited edition! How refreshing
Sky Sit
comments 3
Share

To the uninitiated, H. Moser & Cie is a highly acclaimed independent brand, best known for the minimalist, contemporary, and elegant designs of its timepieces. To those familiar with the family-owned Schaffhausen-based manufacture, its excellence in creating exquisite movements should be no surprise. With that baseline, you would be forgiven for dropping your jaw in seeing this novelty, a sporty intricate timepiece Moser is presenting at Watches & Wonders 2022. The brand has made its first foray into the skeleton watch segment with the launch of the Pioneer Cylindrical Tourbillon Skeleton.

It is no exaggeration that I myself did a double-take when the news hit us. I would not have predicted a sporty skeleton tourbillon from… Moser? That combination did not exist in my consciousness (yet). Then my cognition went into overdrive, and it started to make wonderful sense. The Pioneer Cylindrical Tourbillon Skeleton is an evolution of the MB&F × H. Moser Endeavour Cylindrical Tourbillon with a fully skeletonized movement and paired with a Pioneer case. Still, style-wise, it is very different from what’s available in its lineup and certainly a bold move for Moser. 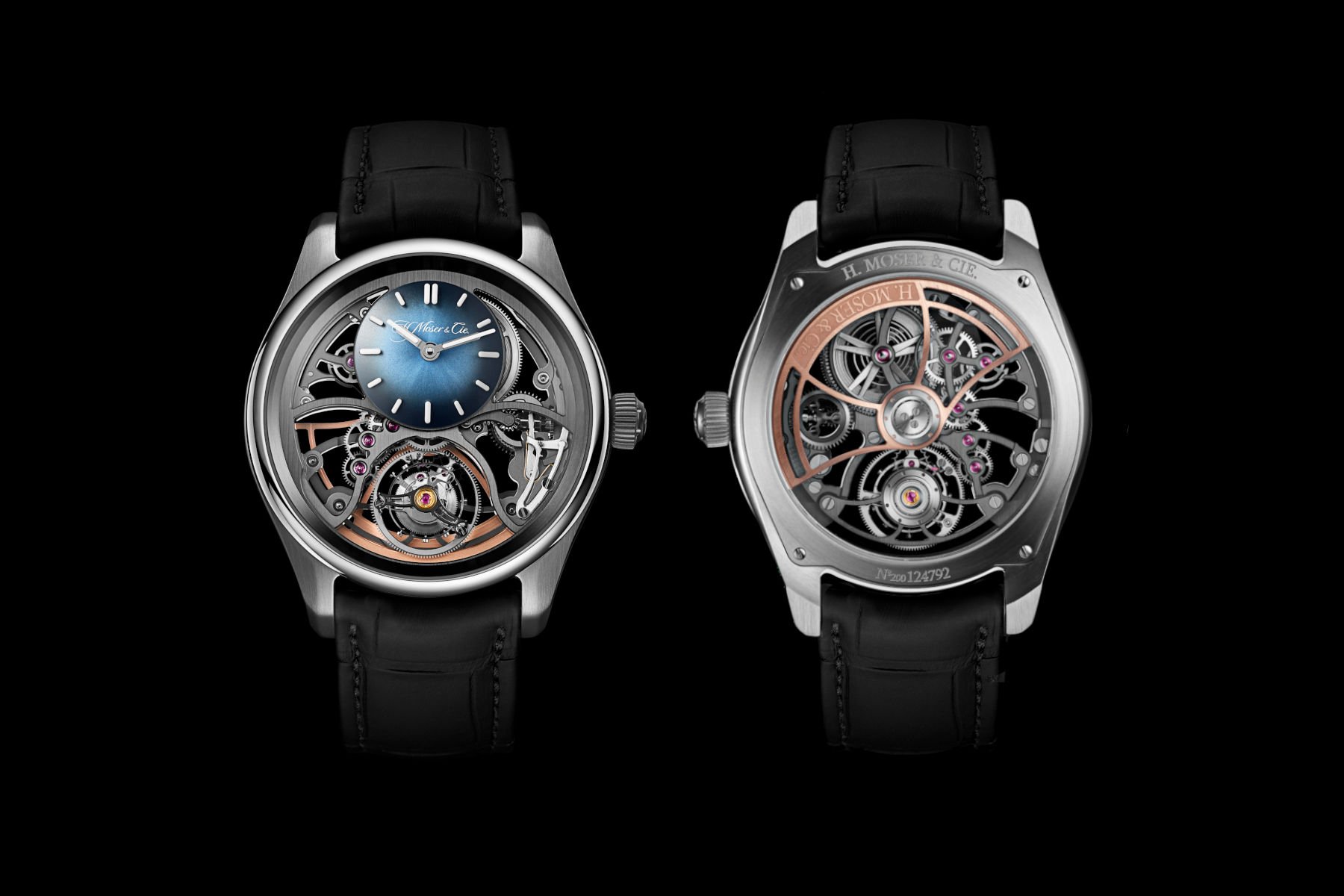 What makes it special

The fully skeletonized machinery is, without a doubt, the star of the show. H. Moser equipped its in-house 60-second flying tourbillon HMC811 caliber with a cylindrical hairspring, and what makes it stand apart from other tourbillons is exactly the cylindrical hairspring. An old feature from the 18th-century chronometers, the function of it is to guarantee even more reliability of the regulating system, i.e. isochronism, in horological terms, in the tourbillon. The challenge is that each cylindrical hairspring is shaped by hand with very specific tools and know-how, and it’s such an ancient craft to remaster, it would take ten times longer to produce each one than a flat hairspring. Naturally, it would also need a taller tourbillon cage to accommodate its height. 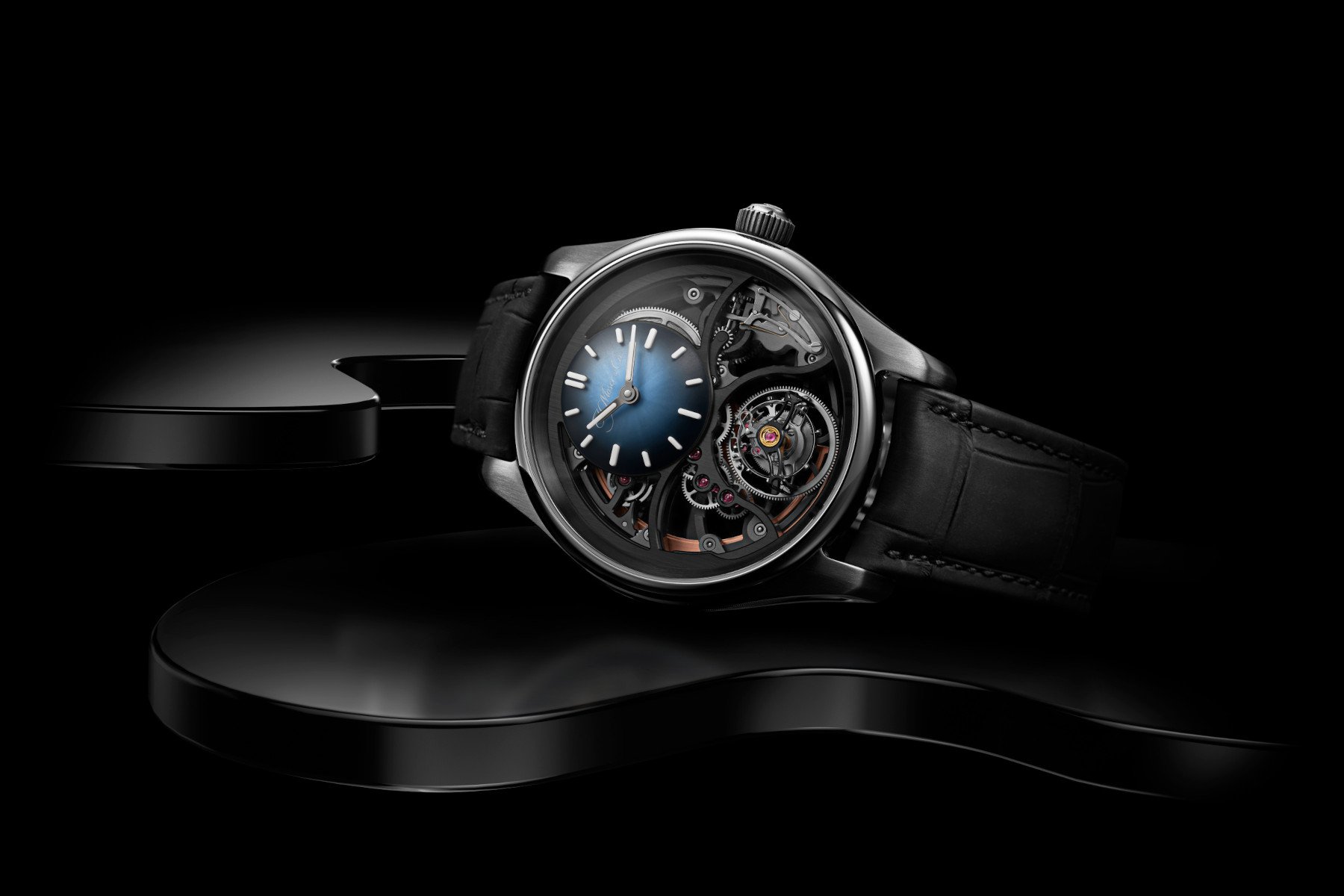 All this sets the stage for what Moser calls a three-dimensional experience, showcased under a slightly dome-shaped sapphire crystal. Not only does it hypnotize you with the graceful twirling of the flying tourbillon, it immerses you in the aesthetic details of the skeleton movement in complete transparency on both sides. A striking view through the case back is a large gold, fully skeletonized oscillating weight that contrasts with the anthracite main plate and bridges. 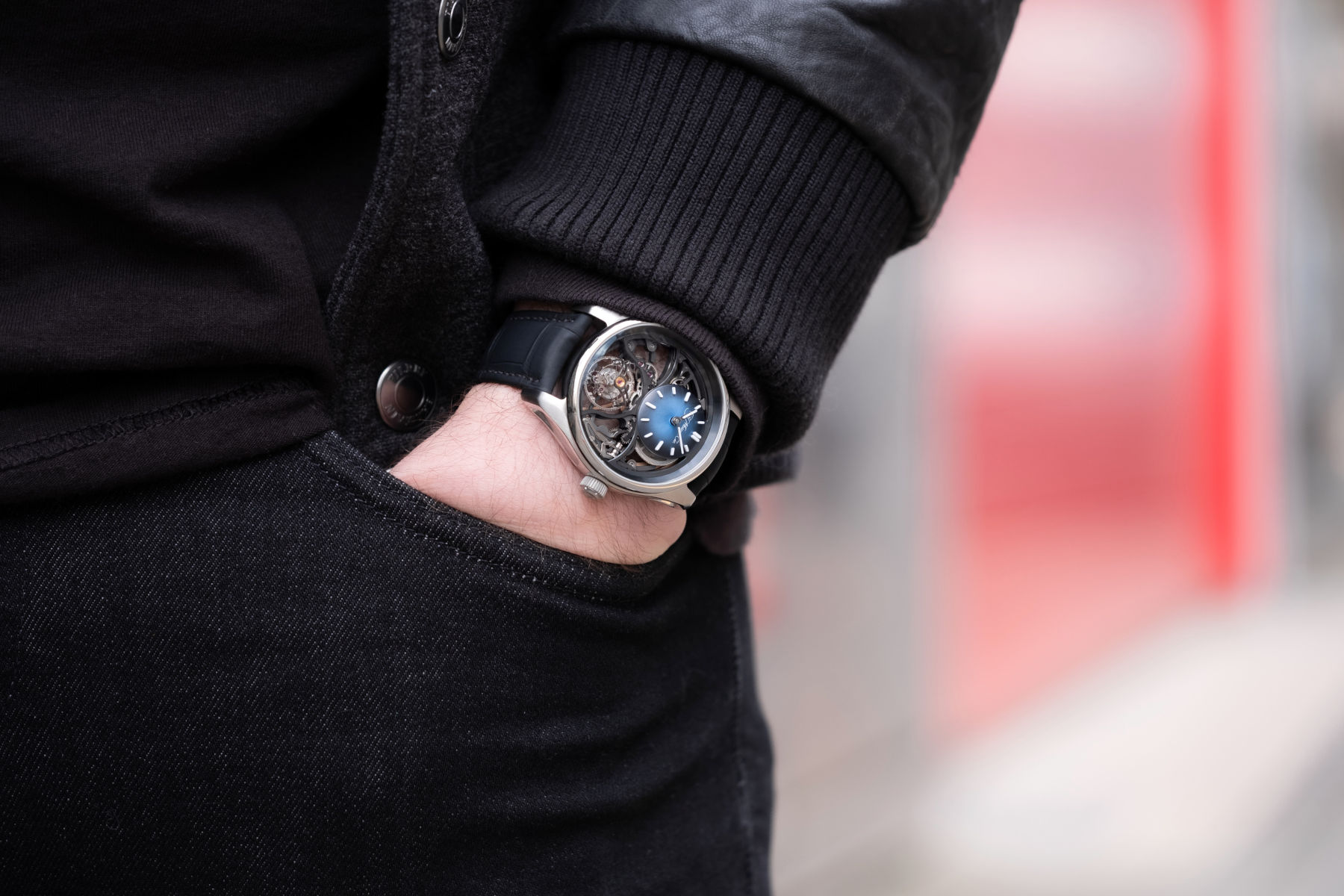 It may feel audacious in design for Moser, which should shock no one given the brand’s long streak of daring creativity. It also feels comfortingly on-brand, thanks to the recognizable sub-dial in Moser’s signature color, funky blue fumé. Yet, there is also the use of innovative elements such as the indices and hands made in Globolight. Globolight is a ceramic-based material containing Super-LumiNova, and adds to the three-dimensional nature of the piece. Now, with everything housed in a case for their Pioneer watch family, it just feels like a natural step forward, or maybe a leap, in H. Moser’s product roadmap. 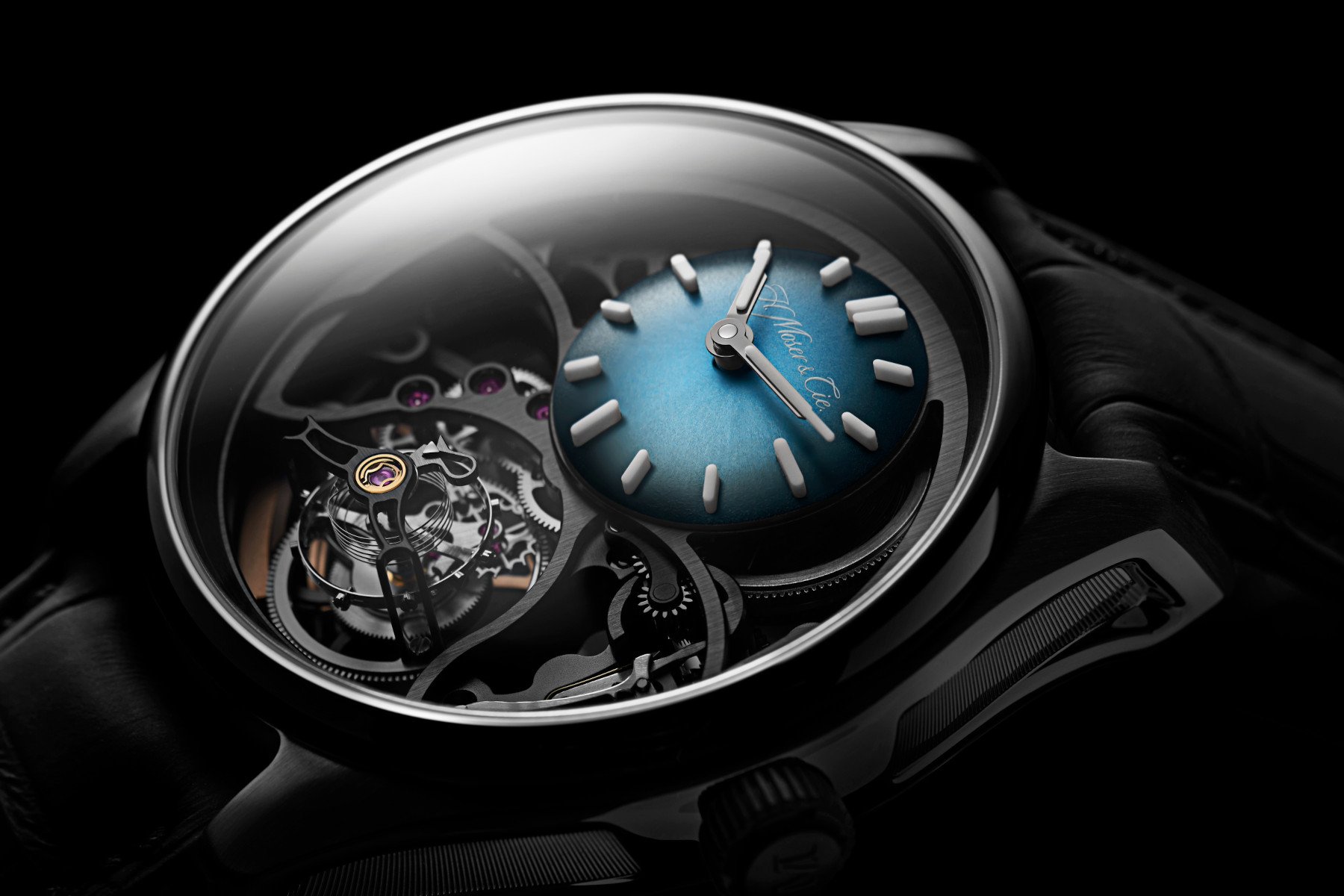 Tourbillons are not a rare sight in Moser’s offerings. A sporty tourbillon, however, is the first of its kind for the brand. By packaging top-line sophistication in a universal style, the Pioneer Cylindrical Tourbillon would have a wider appeal. To that end, skeletonizing the watch also serves to reduce weight, which is desirable in active settings. The model comes in a 43.8mm stainless steel case with 12 ATM of water resistance, to be wearable from suits to sports. 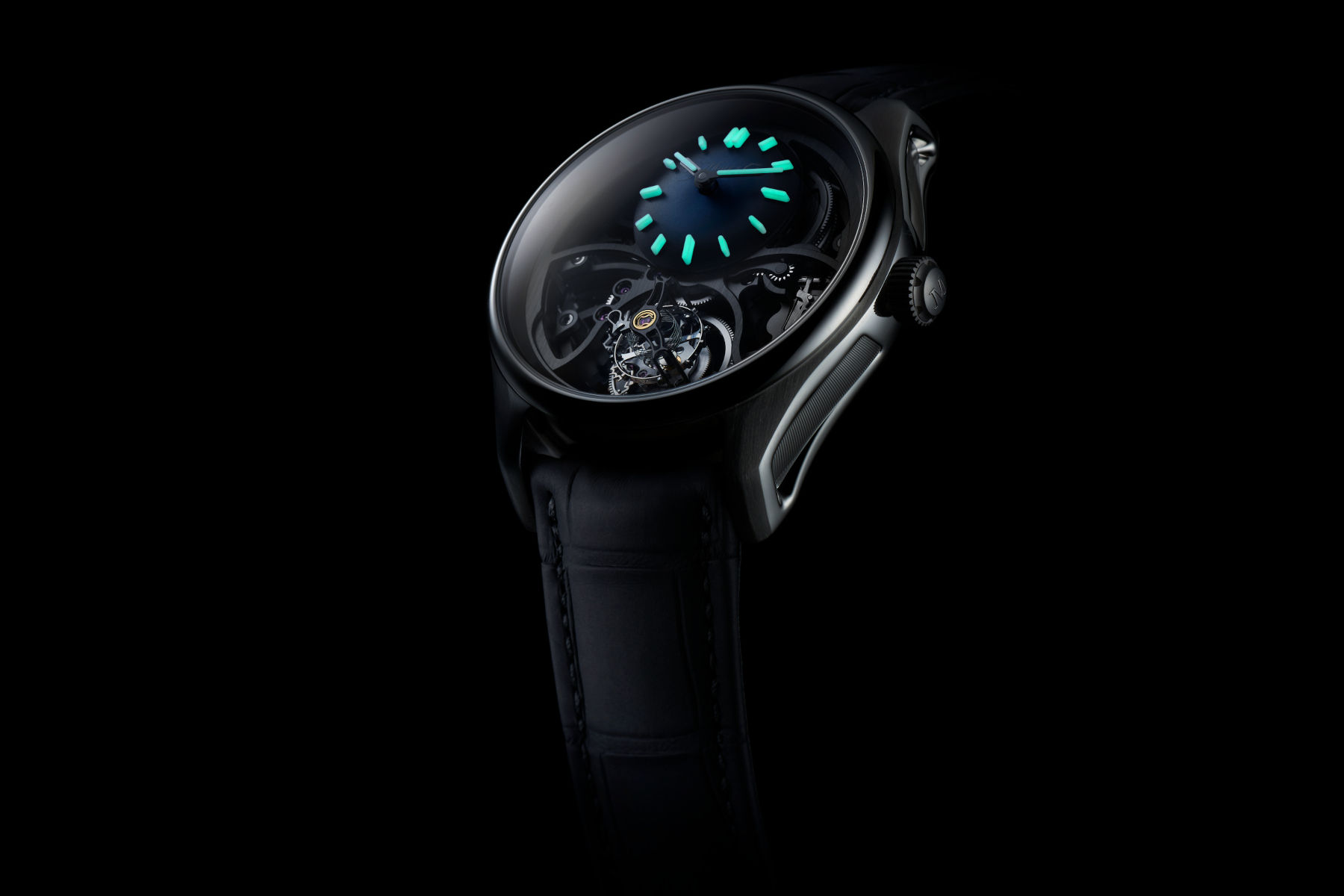 Skeleton watches are an acquired taste and appeal to the more refined palate. I seem to have a radar for them, given my past involvement in their conception. It is fascinating to have seen the many creative possibilities brands have come up with. Yet, they all look distinctive in their own right, at least the ones that are done well. They are also instantly recognizable. In my mind, Moser has managed to pull off this piece beautifully and methodically. It has defined a style to call its own. Over time, it will be unmistakably Moser.