Searching for the right watch roll or watch box can be quite a journey. I have tried many boxes, including the now-discontinued Orbita aluminum case and a bunch of wooden boxes as well. None of them really wowed me, though, until I saw a handmade wooden watch box from Officina Creativo. 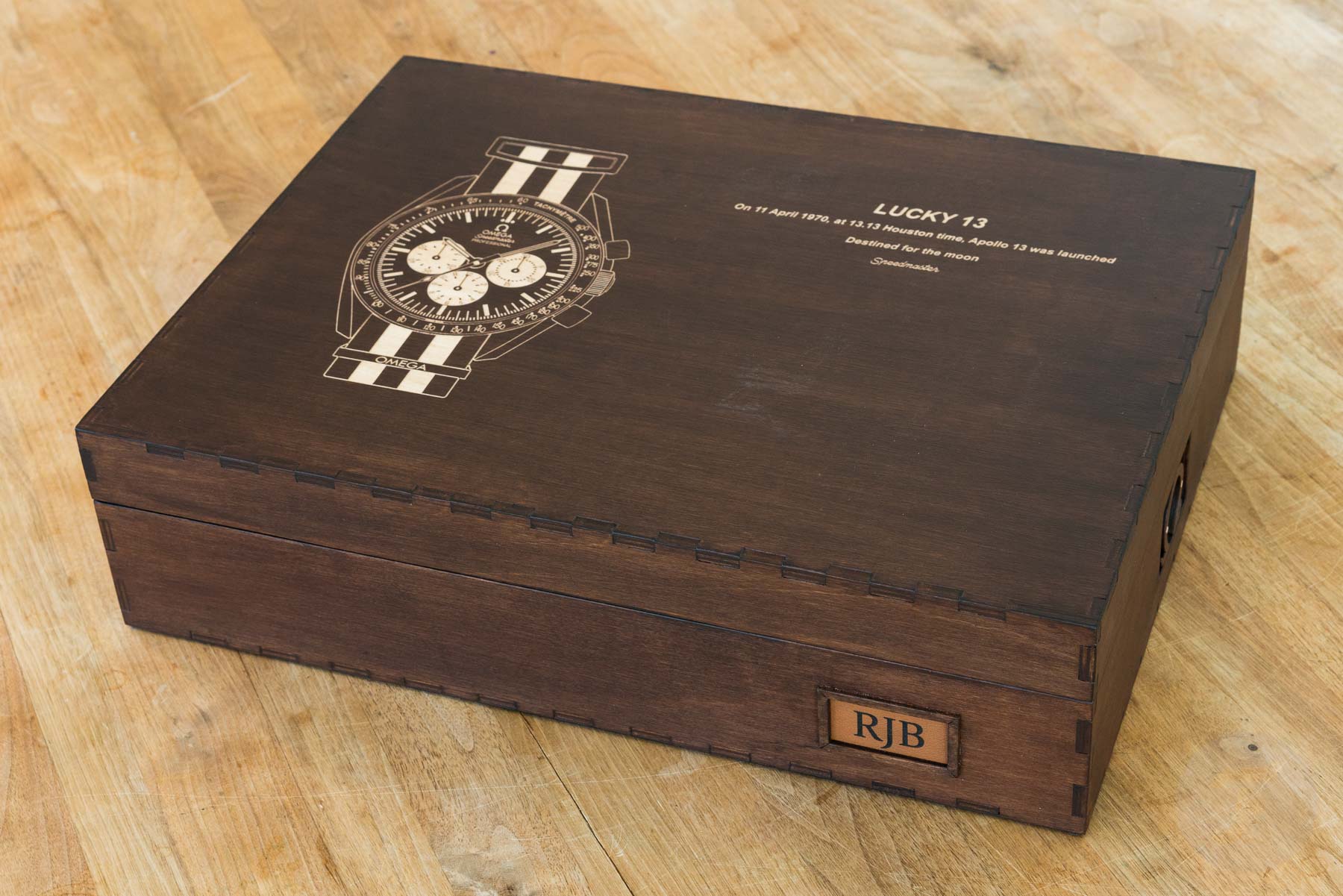 I had already noticed Officina Creativo’s work on Instagram, and not too long ago, my friend Ralph (@fiftyfathommilspec) brought his custom-made Officina Creativo case to the watch get-together we reported about here. I was thrilled and got in touch with Richard, the owner of Officina Creativo, to discuss the possibility to create a box for some of my Speedmaster watches. Although I rarely have more than a handful of watches at home, I do want something nice to keep them in and, of course, to bring to future get-togethers. Bringing a watch roll is fine for a few watches, and it’s convenient as well. A hand-made wooden watch box, however, is something else. 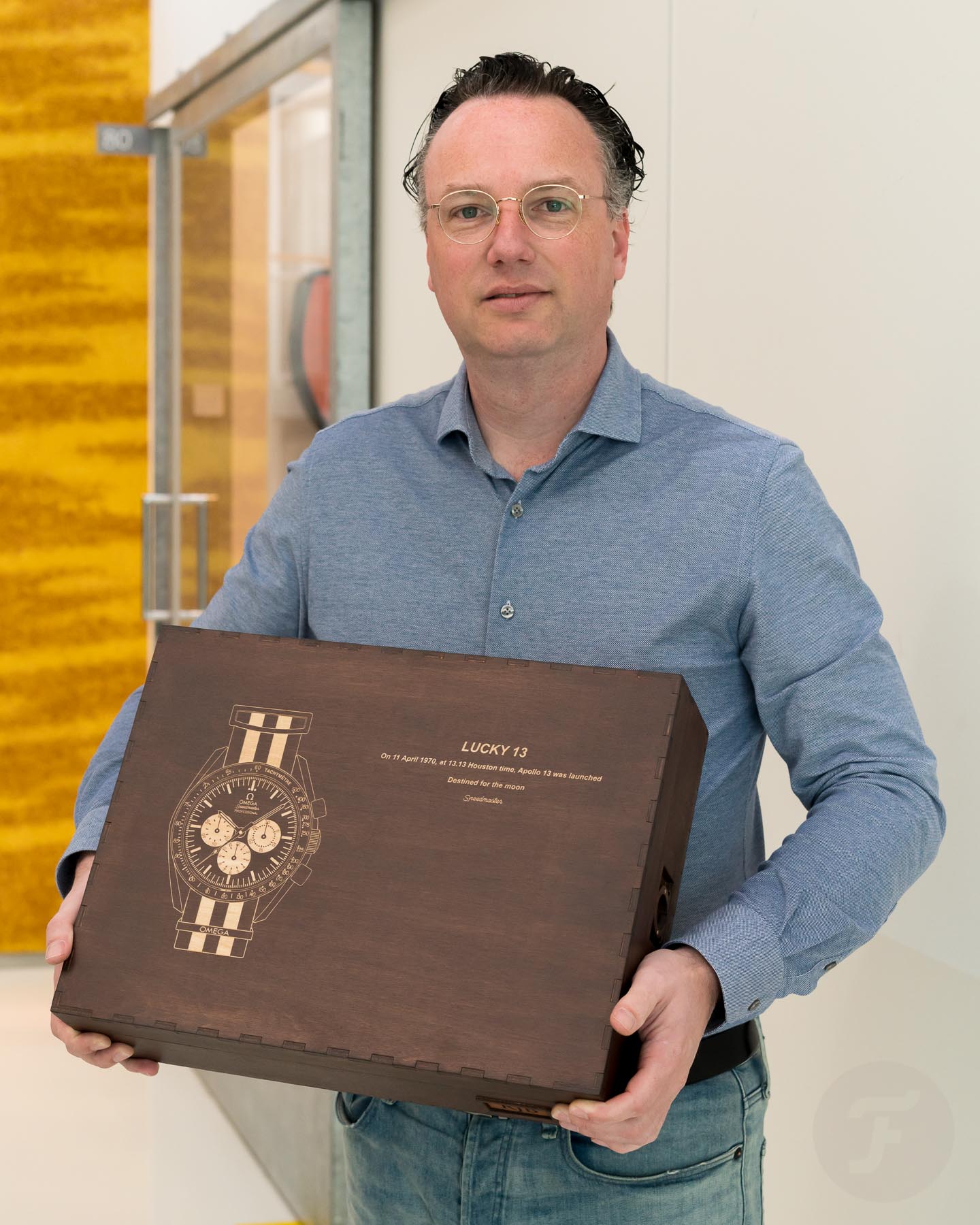 Officina Creativo manufactures a few boxes per month depending on the complexity. It started after Richard successfully made some hand-made boxes for his own Panerai watches. Afterward, he started to make them on request from other collectors. Eventually, it reached the point when it got so serious that he decided to make it into a business. When I visited his workshop to pick up my watch box, he showed me the impressive laser machine that he uses for engraving and cutting tasks. Officina Creativo does absolutely everything in-house, outsourcing none of its manufacturing. 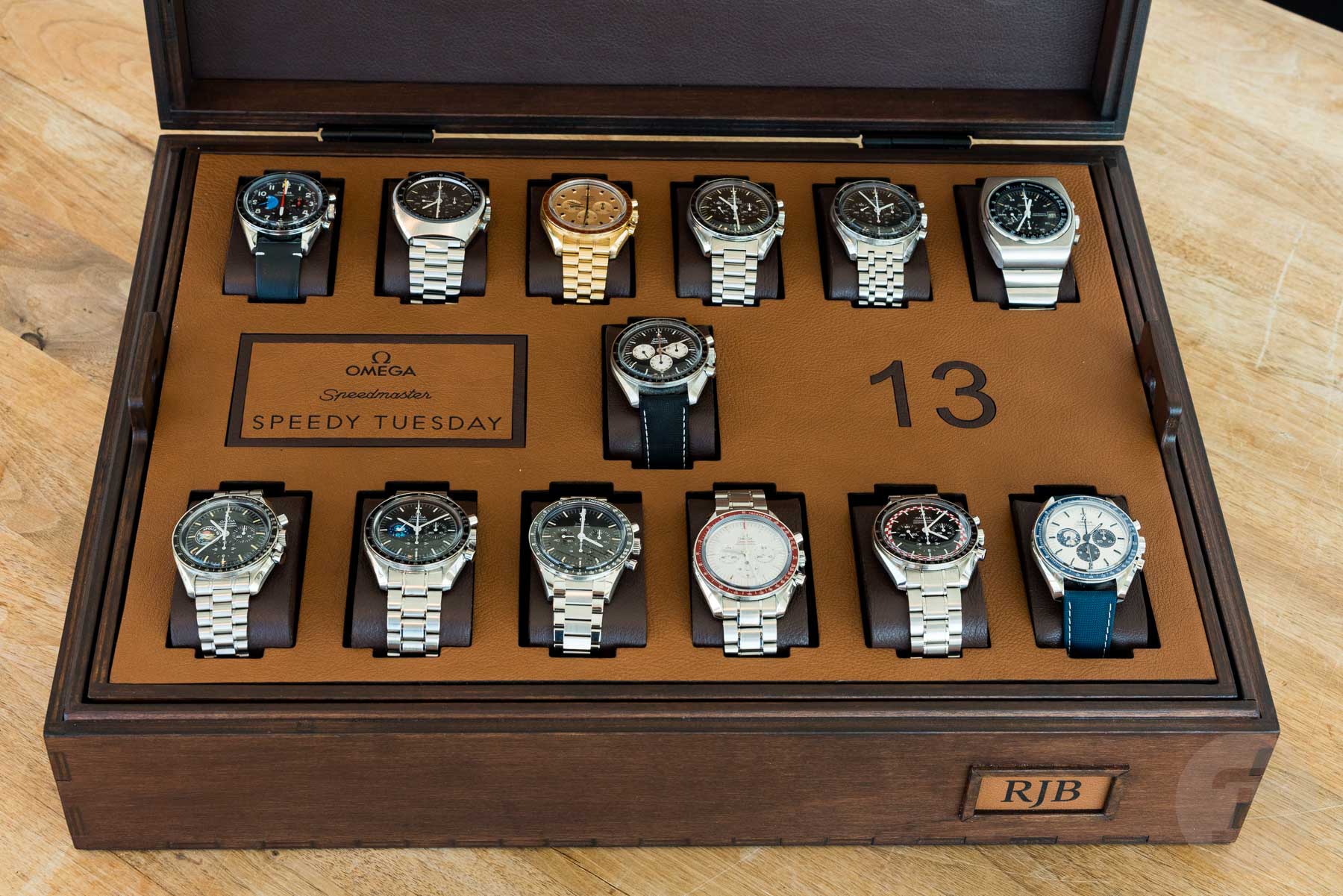 Anyway, back to the beginning. After exchanging some messages about my wish for a custom-made watch box, Richard proposed to have a phone call to discuss the procedure and to see if I already had some ideas of my own. I wanted a box that could hold 13 Speedmaster watches, as 13 is my lucky number and one that I’ve chosen for a number of Speedmaster limited/numbered editions that I own. Not only is 13 the date (in April) that I was born, but ’13 is also the year our daughter was born. As such, it has been my “lucky number” for a while. I also wanted a Speedmaster-themed box. Speedmasters are the watches that I collect most, and they deserve a nice place to stay when I’m not wearing them.

We also decided to have an extra layer in the box to hold some accessories like straps or strap-changing tools. 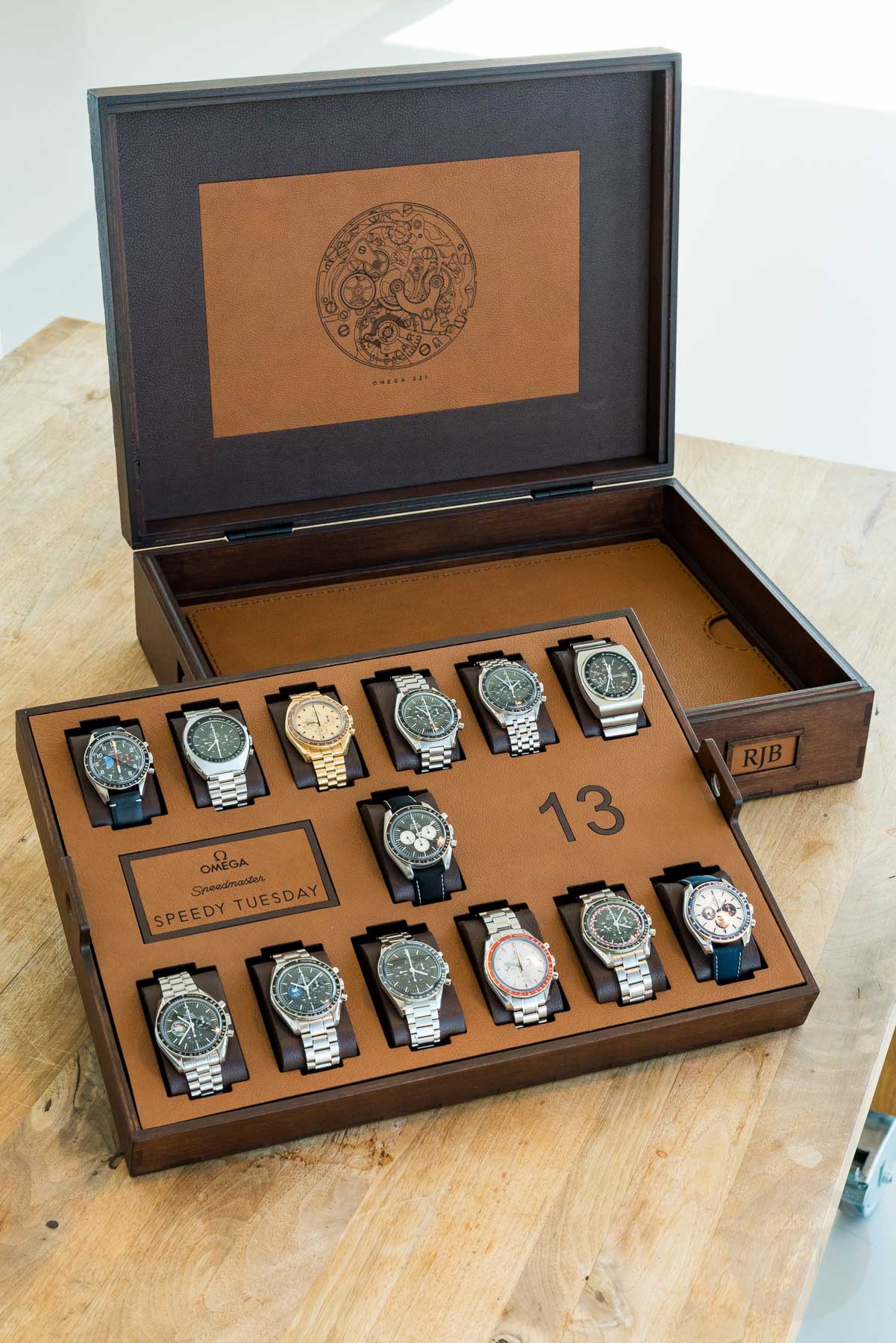 We even discussed having more slots or an extra layer for more watches. However, as I mentioned above, I don’t keep everything in the same place, and 13 is already stretching it. But since the number has a special meaning to me, I thought it could be a good theme. Besides, Apollo 13 also comes to mind when talking about this number, as do the four watches that Omega dedicated to that mission. I own all of those, but only the Snoopy 2015 has a number 13 engraved in the case back. 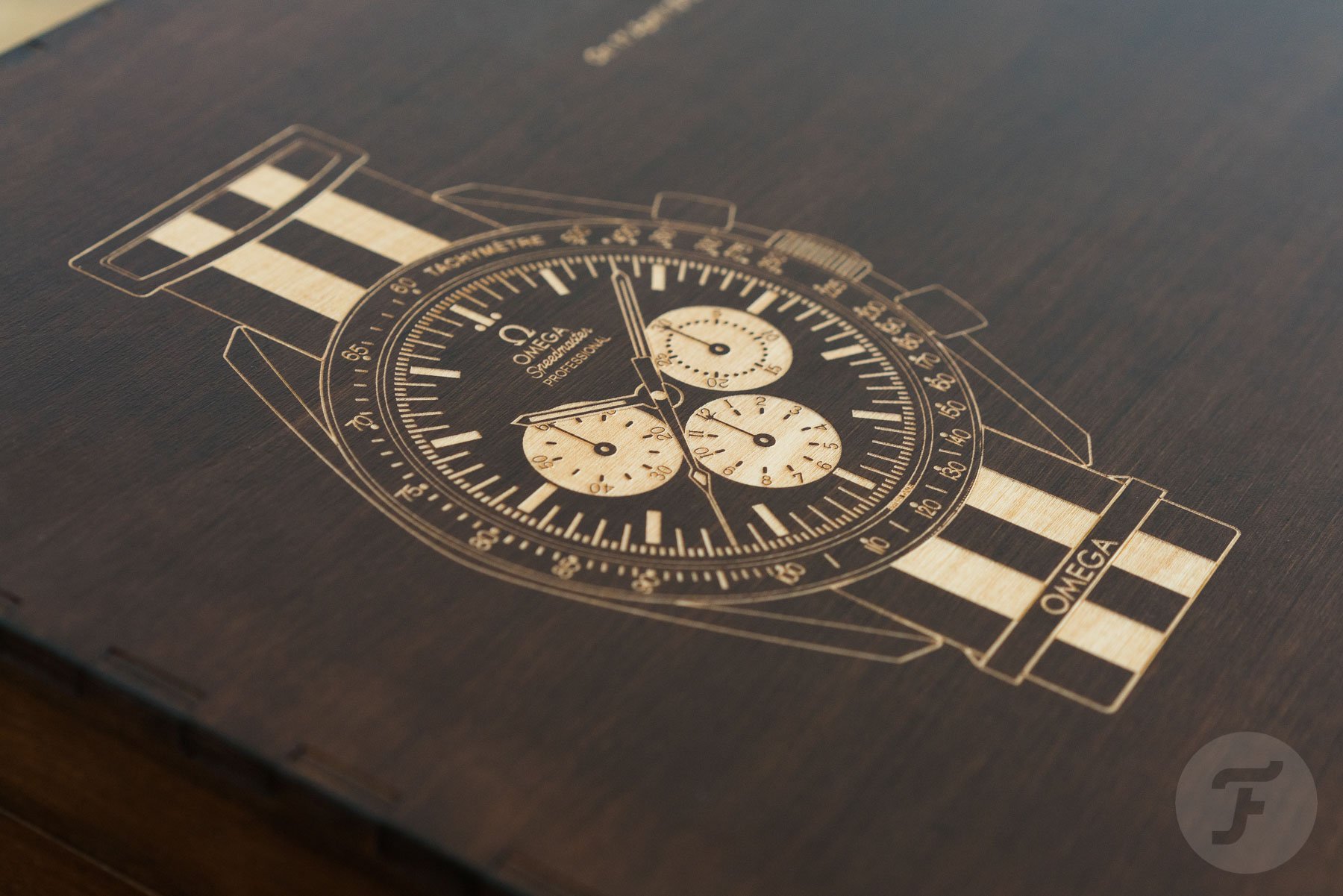 Another idea I had was to put a graphic of the Speedmaster Speedy Tuesday on the lid of the box. Richard uses laser-engraving techniques for that (which he does himself in his workshop), so I imagined that it should be possible. A lot of Officina Creativo’s time was spent recreating a proper computer drawing of the Speedmaster Speedy Tuesday for the engraving on the lid of the box. I only had a simple drawing of the watch, which was not sufficient. Richard needed to draw the entire watch in order to make it “fit” for his laser-engraving software. Needless to say, this request added a substantial cost to the watch box. 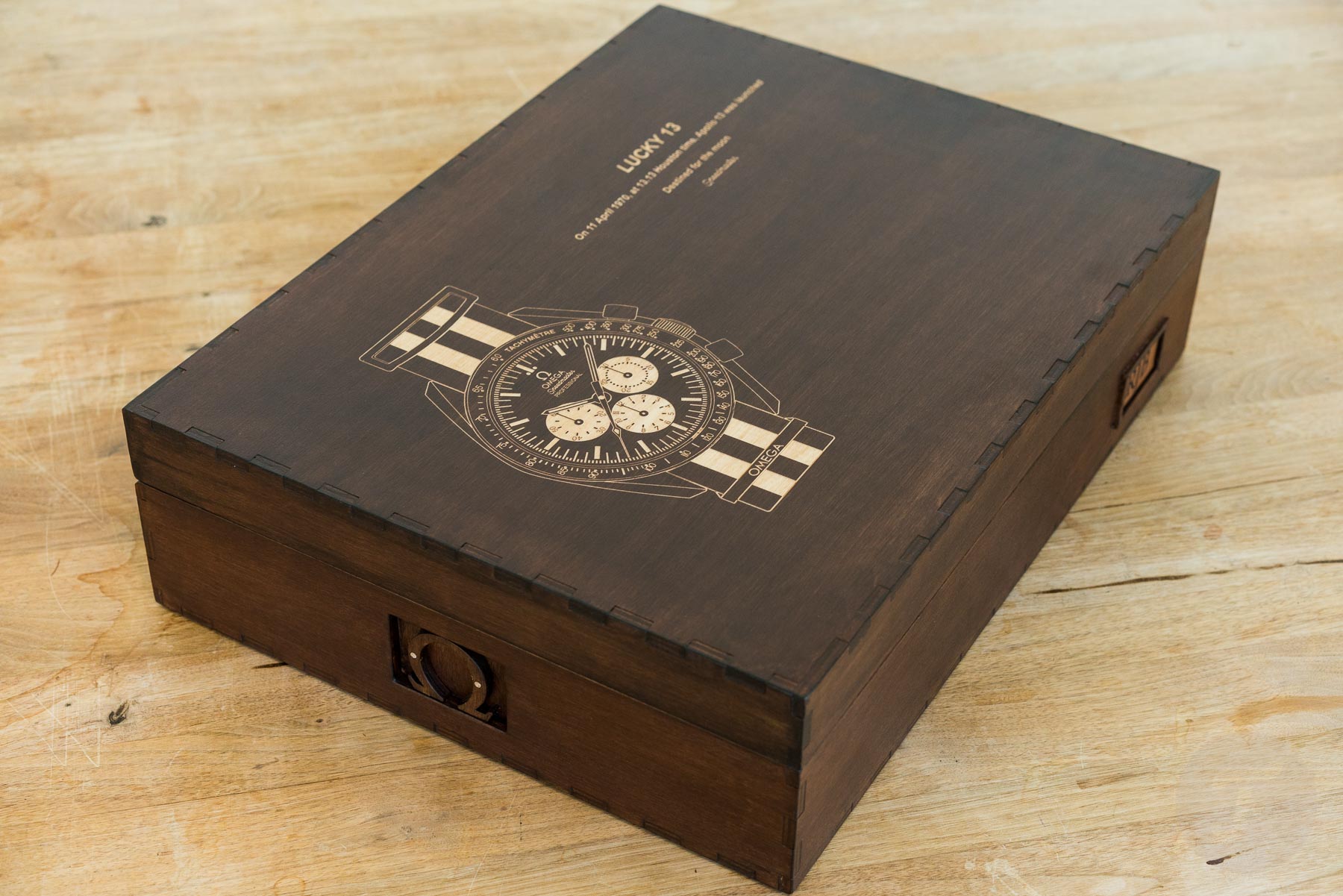 For the watch box, Officina Creative used birch, then covered it with three layers of wood stain (ebony, cherry, and walnut). Finally, it received a transparent lacquer finish.

The text on the right side of the lid was Richard’s idea, to which I agreed. I like the reference to 13, of course, and to the corresponding Apollo mission from 1970. 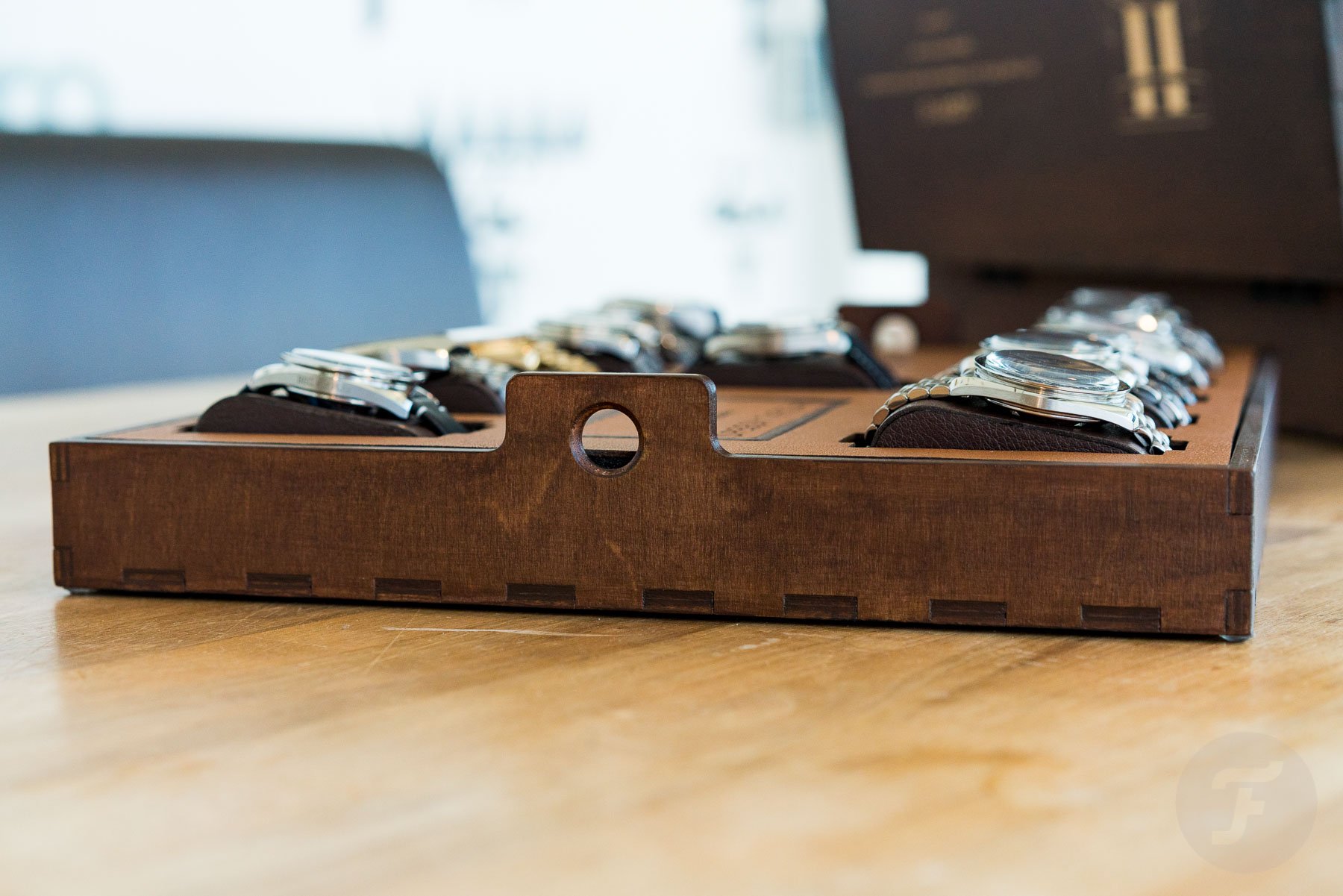 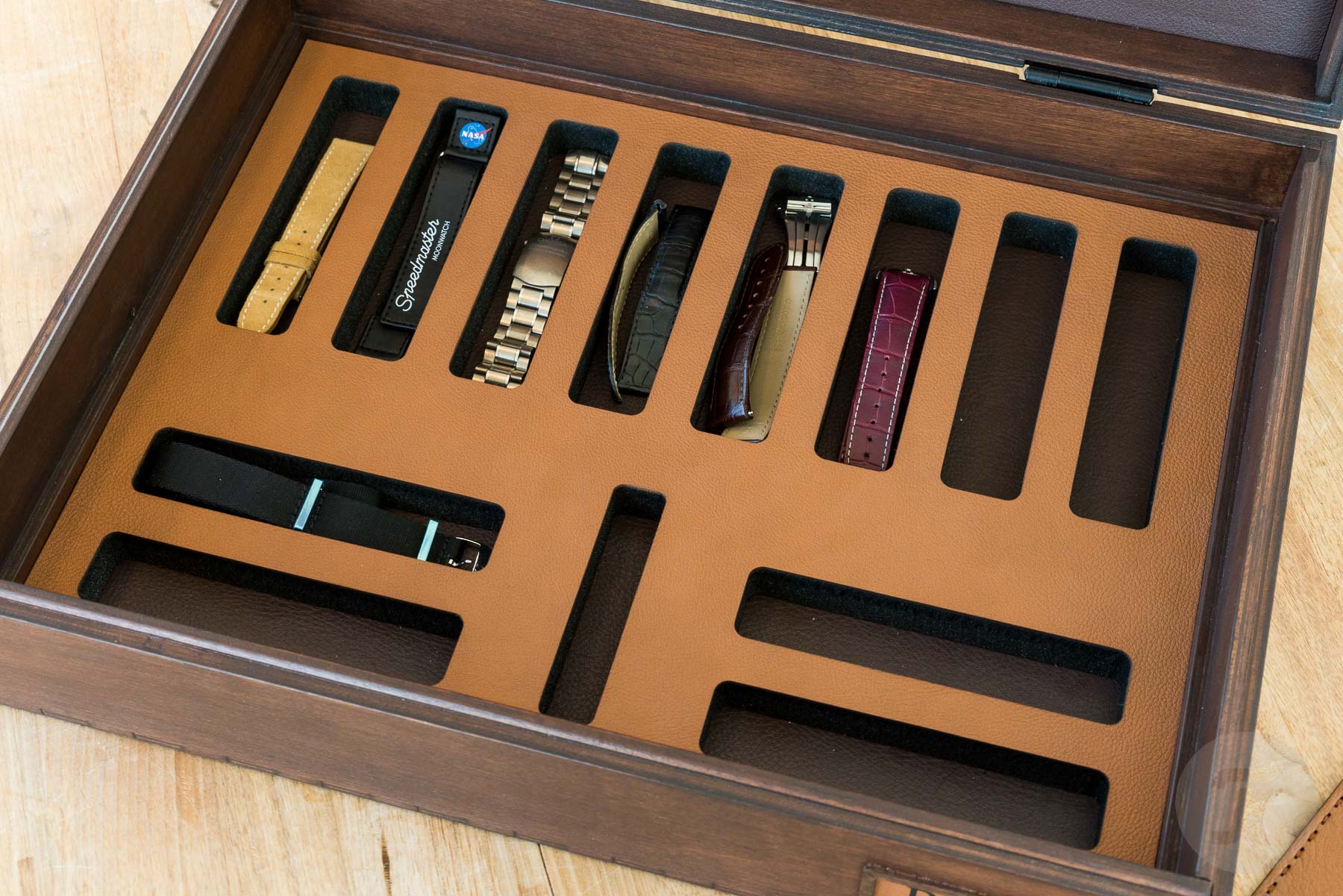 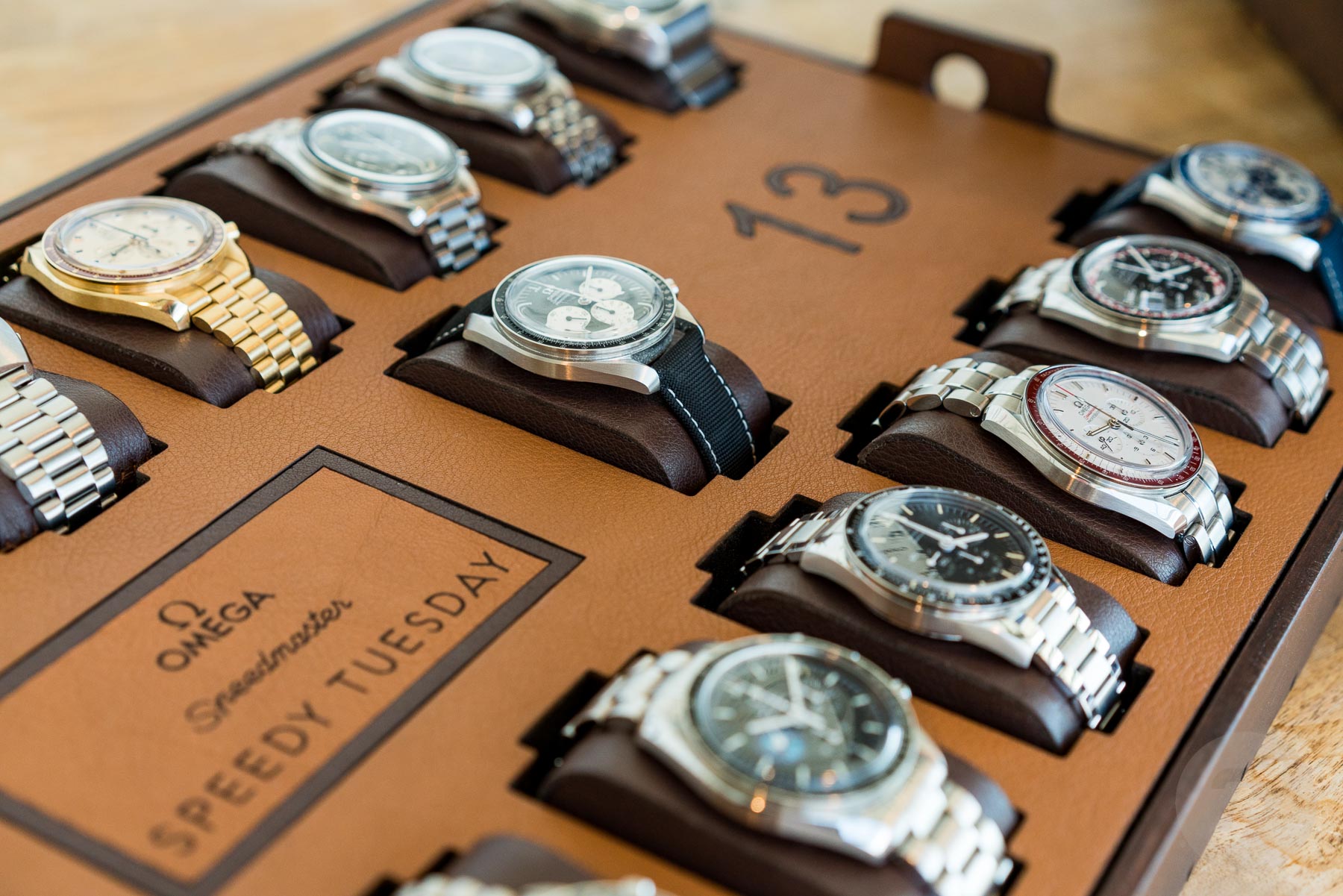 Inside the box, there’s padding covered with premium leather. There are two colors used in my watch box, both of which are brown tones. Coincidentally, they’re the same colors in my car, which I like very much. On the inside of the lid, the leather has been laser engraved with a technical drawing of Omega’s caliber 321. 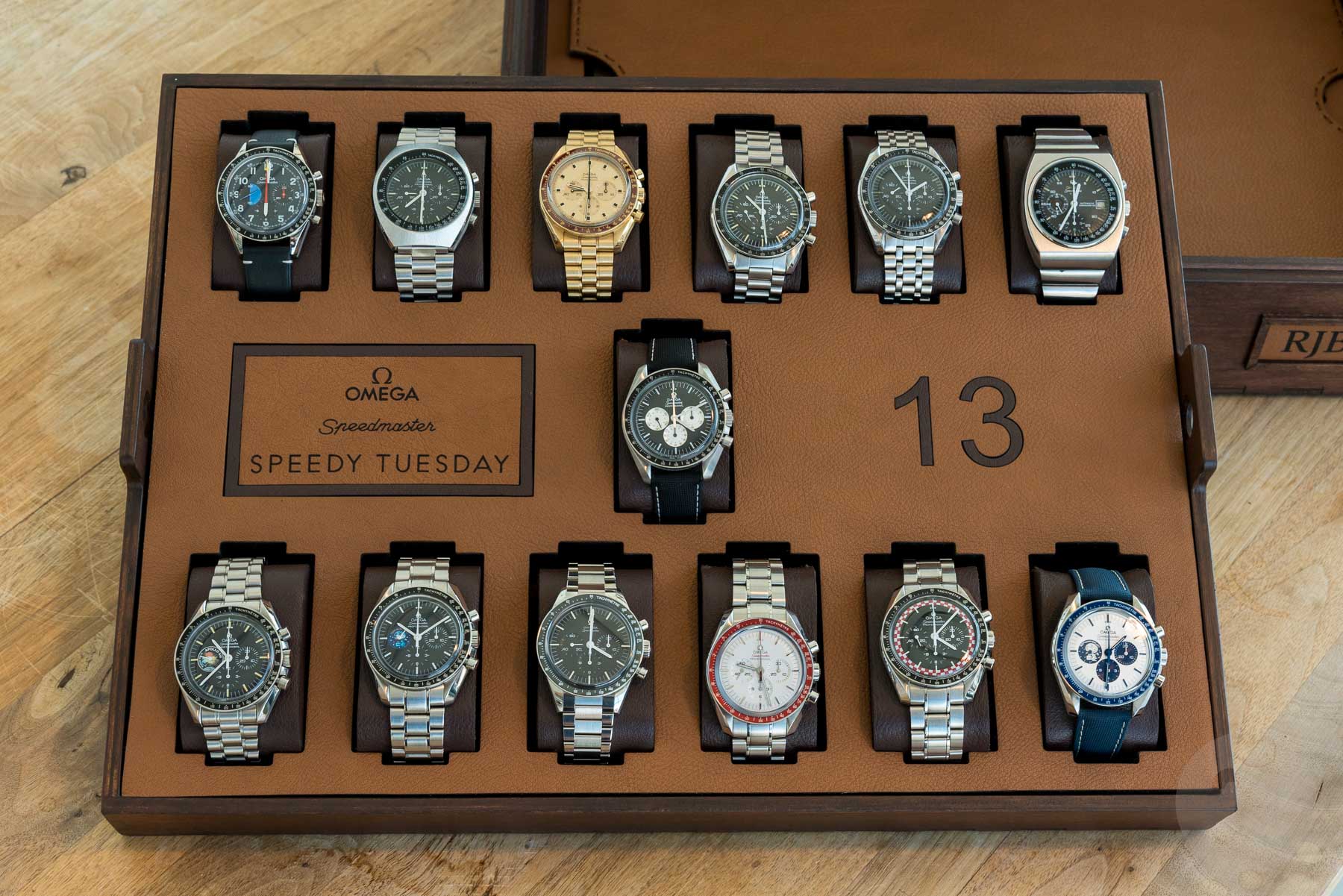 The 13-slot compartment can be taken out, and it is also covered in leather. The “13” and small Speedy Tuesday patch on the left are laser-engraved inlays, not printed graphics. When the tray is taken out, there’s a brown leather mat that serves as a divider between the tray and the second compartment for accessories and straps. This mat can also be used as a protective surface for when I actually do change the straps or bracelets. 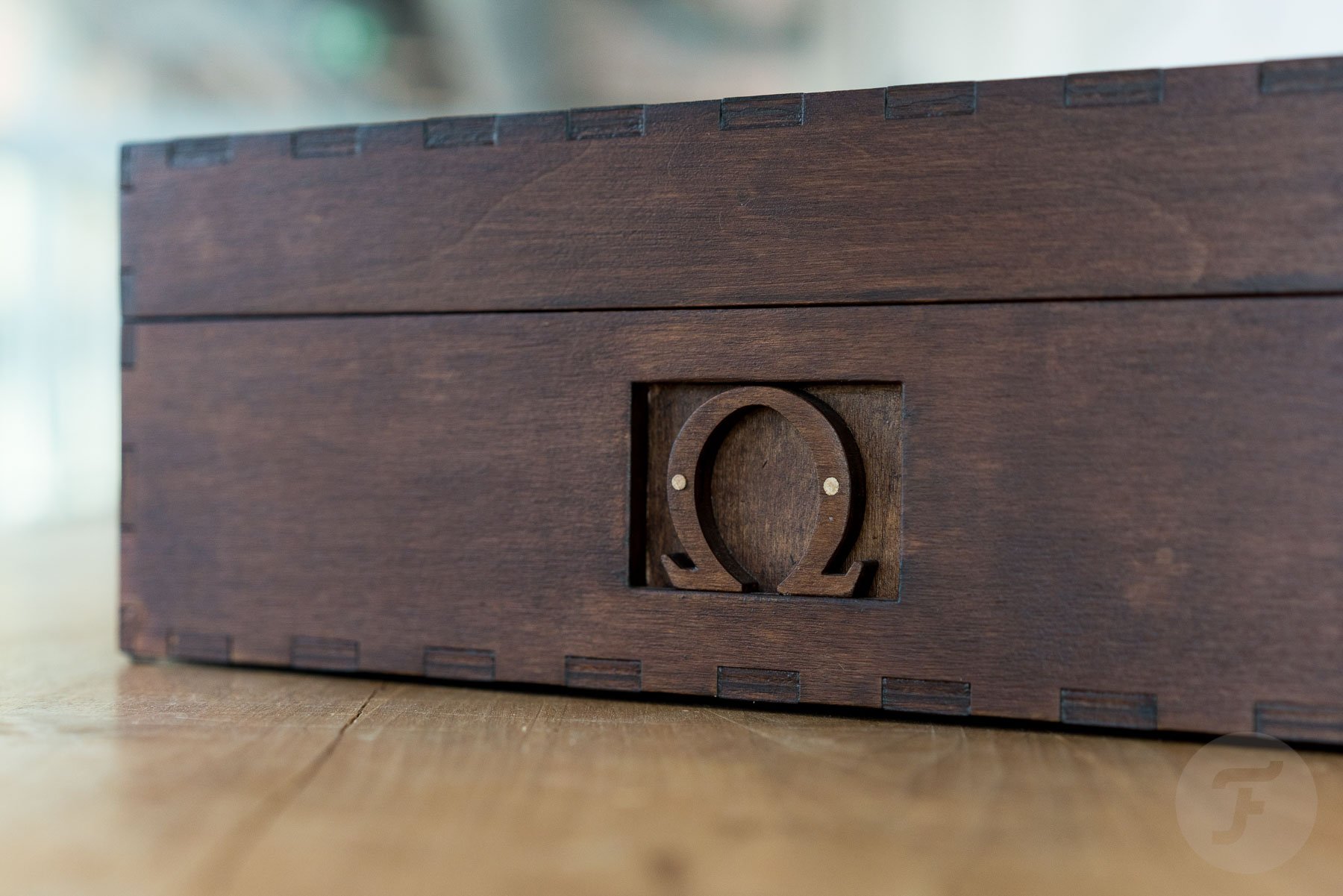 Last but not least, there’s a laser-cut Omega logo attached to each side of the case with two wooden pins. There’s a patch with my initials on the front as well. The box very much follows the Omega Speedmaster theme, as my plan is to use it solely as a box for some of my Speedmasters. However, you can customize it in many ways, using your very own personal theme. Of course, you can also keep it very generic if you’d like.

On the official website, you can find a number of examples that Officina Creativo created for other collectors. They include everything from Blancpain- to Panerai-themed boxes. However, you can also use something completely different as a theme, such as your company name and logo, for example. 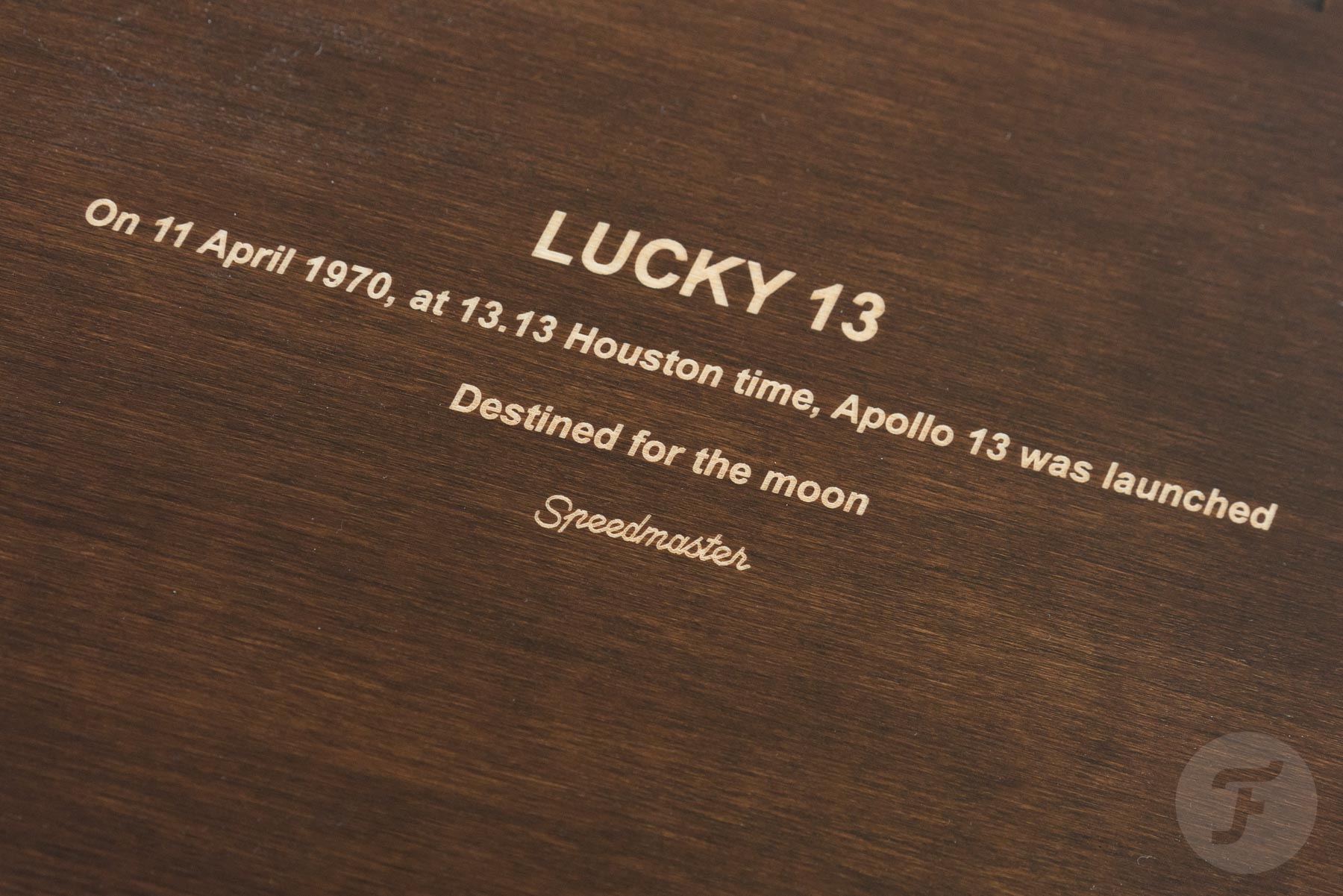 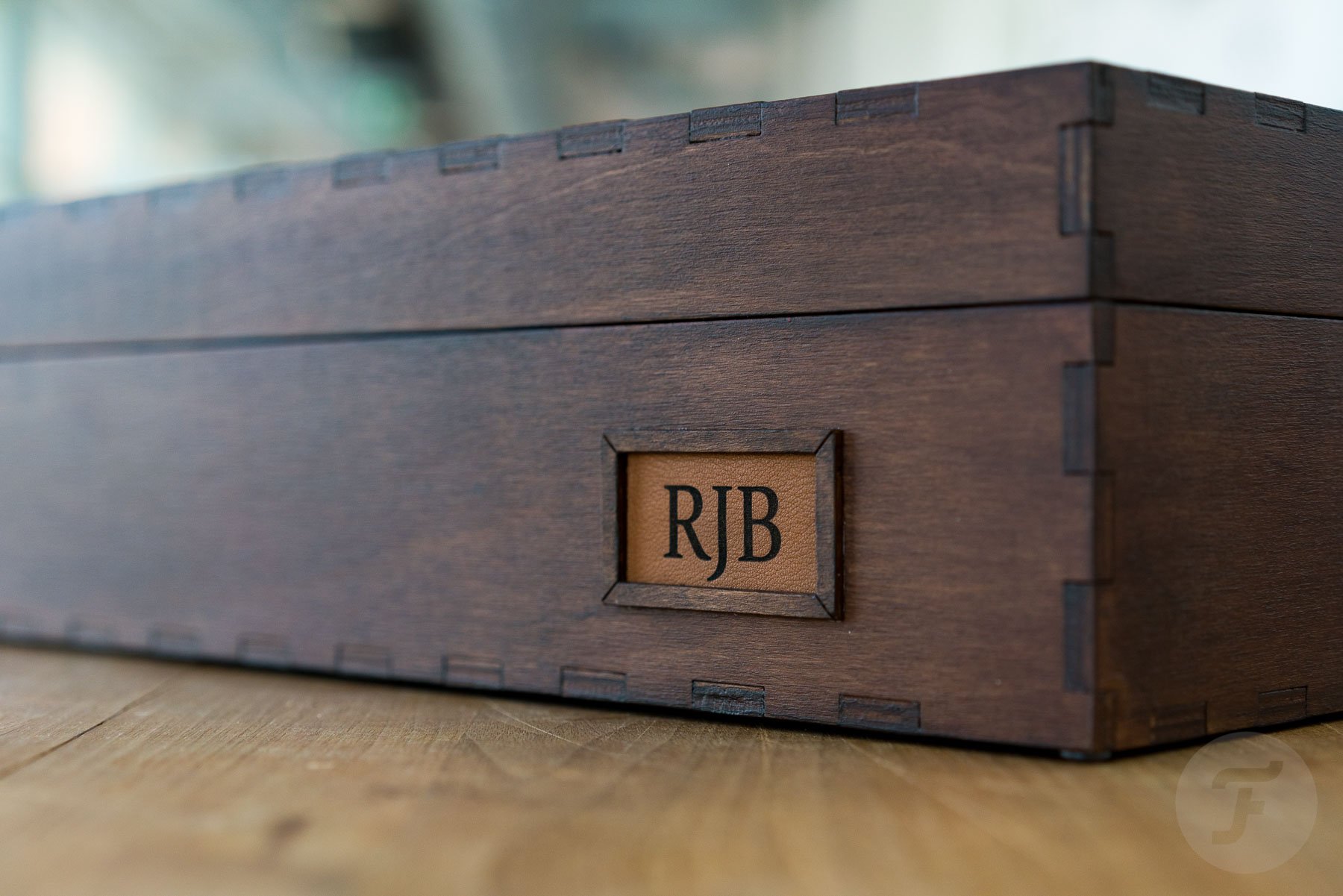 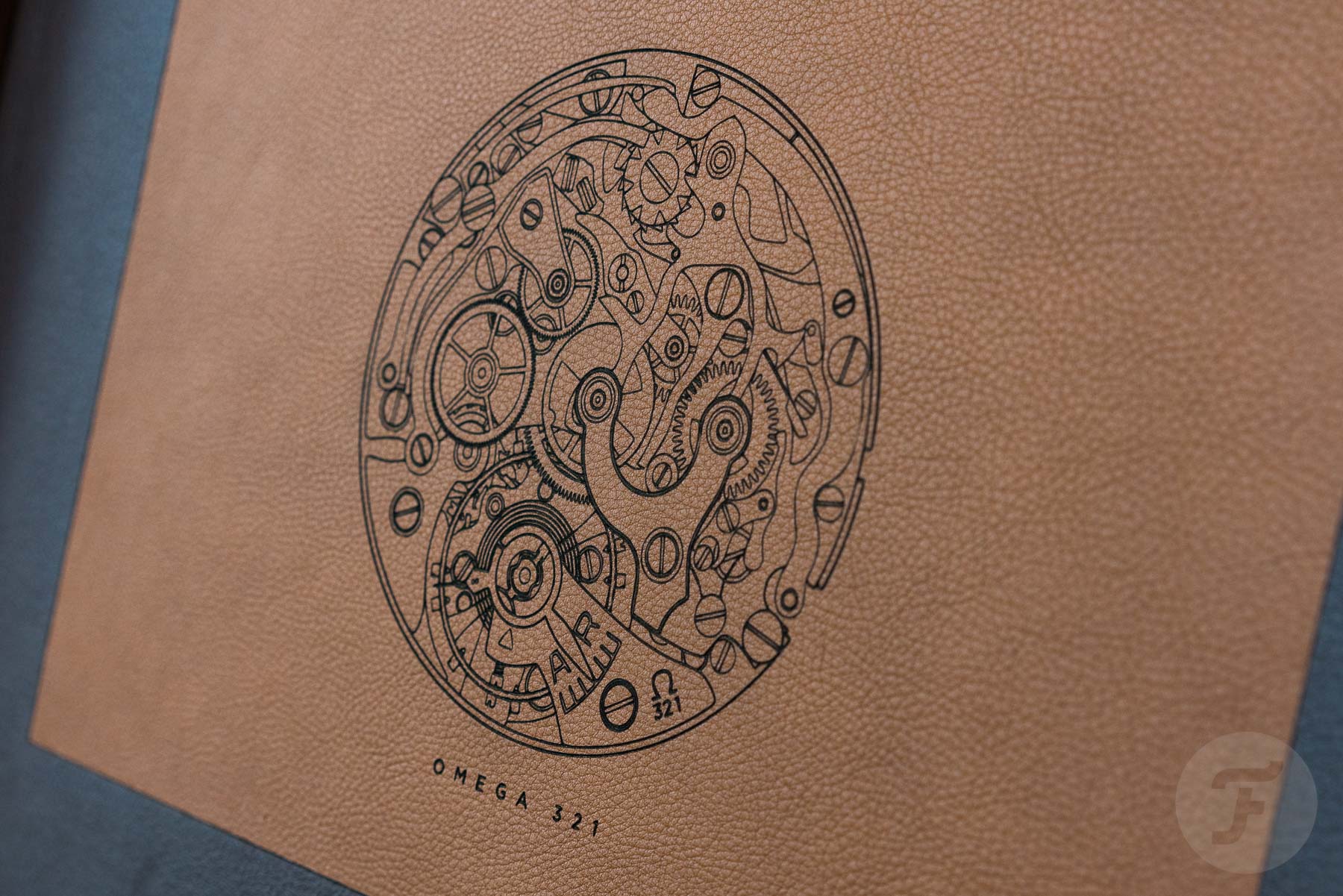 A watch box from Officina Creativo starts at €330. Depending on your wishes and customizations, however, the prices will vary between the starting price and €1,500. As I indicated above, the preparation for the laser engraving of the Speedmaster Speedy Tuesday watch took a considerable amount of time, so that definitely added to the price of this box. The watch box was not cheap, but neither were the watches inside, and I admire the craftsmanship of Officina Creativo, which comes at a certain price. All things considered, I don’t think these boxes are too expensive. Plus, it’s just nice to have something hand-made specifically for you (and your watches).

On the company’s website, you can see a number of examples and the pricing structure. Delivery times are between four to six weeks, and prices exclude shipping costs.

Have you ever had a custom watch box made for you, or would you ever consider getting one made? Let us know in the comments below.