And I become lost in space
Thor Svaboe
comments 19
Share

Ever since the brilliant mind of Edouard Meylan came up with the sleekest contender in the Integrated Bracelet category, I’ve been smitten. Like being embraced by a piece of alien jewelry, trying it on last year was eye-opening. Its shape is most like an armadillo’s armored body, and nothing looks like an H. Moser Streamliner. For me, that is a big golden tick on my list of positive attributes. For the new H. Moser & Cie Streamliner Vantablack Tourbillon, its forte is making the dial magically disappear into space.

I’m not a contrarian — well, not always — and have quite a few watches in my collection that are derivative or inspired by something else. Obviously, this is unavoidable as there are only so many ways to design a 35-45mm piece of metal with a dial and some hands. Unless you get lucky, there will always be some detail that has been seen before. But the Streamliner series is such a different proposition that even the most fervent homage hunter will struggle and fail. This time, the seventies case brushwork radiating out from the crystal’s edge takes on the warmth of red gold. 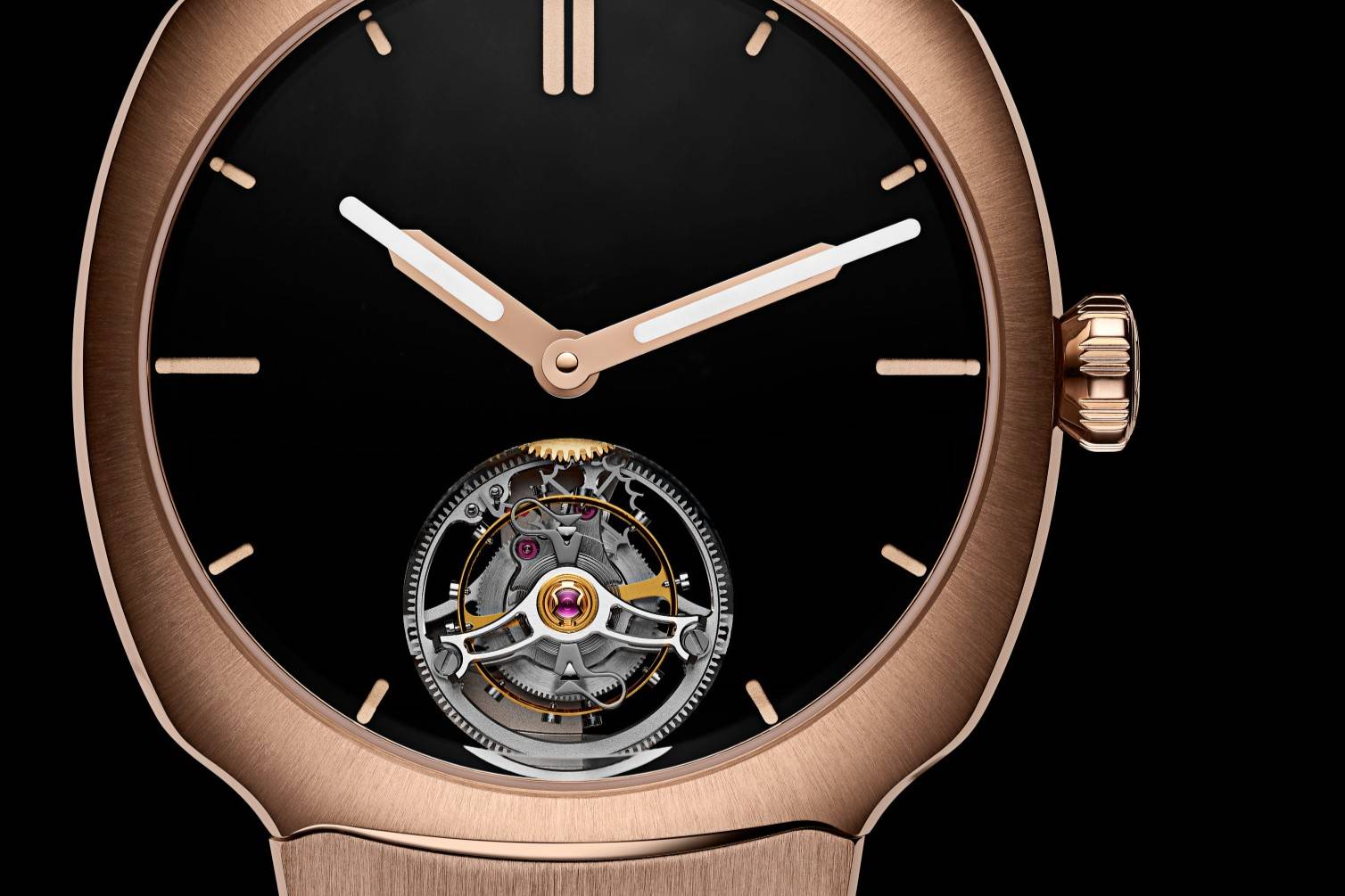 Many an otherworldly watch has been either a one-hit wonder or a big brand misfire. With the Streamliner, however, the H. Moser designers have managed their contrarianism while also creating recognizable family traits, shown in everything from the usual minimalist deep fumé wonders to the castellated checker-seconds track of the cool Streamliner Chronograph. But today’s release is different, and the alien armor glimmers with gold. But where is the dial? Me, I love the candy-like fumé depths of a Moser dial and don’t need precious metal to set off my grail-watch radar. But instead of feeling a sense of overkill, the essence of the Streamliner is intact, and somehow deified. Within the deep void, there is a dial with a surface treatment of Vantablack, the darkest, most color-devoid material known to man. 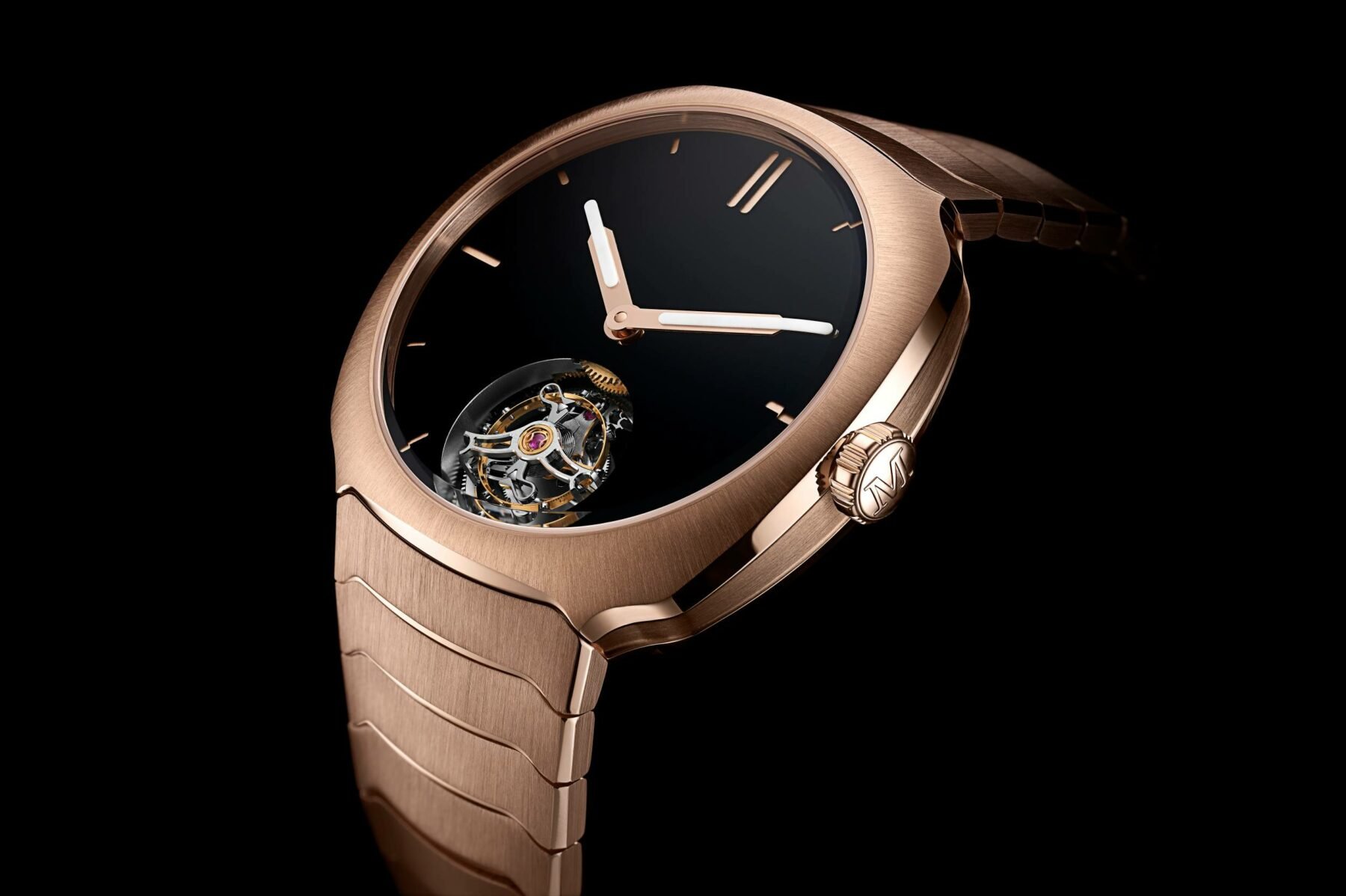 The unexpected glamour of deep space

Vantablack is a coating used in astrophysics for telescopes and by the military. It is comprised of juxtaposed carbon nanostructures and absorbs 99.965% of light. As our eyes need reflected light to perceive what we are looking at, Vantablack tricks us with the appearance of an absence of matter. H. Moser & Cie had to put a structure in place and develop special processes to successfully work with this material, which is notoriously fragile. The effect, however, is astounding, as if the dial simply is not there, and the details are left floating in space. Seemingly hovering in the center are slim, rounded hands with solid lume centers for when the rest of the outside world turns dark. But even if you’re viewing the Vantablack dial deep from within an underground cave, the darkness around you will never match the black hole on your wrist. 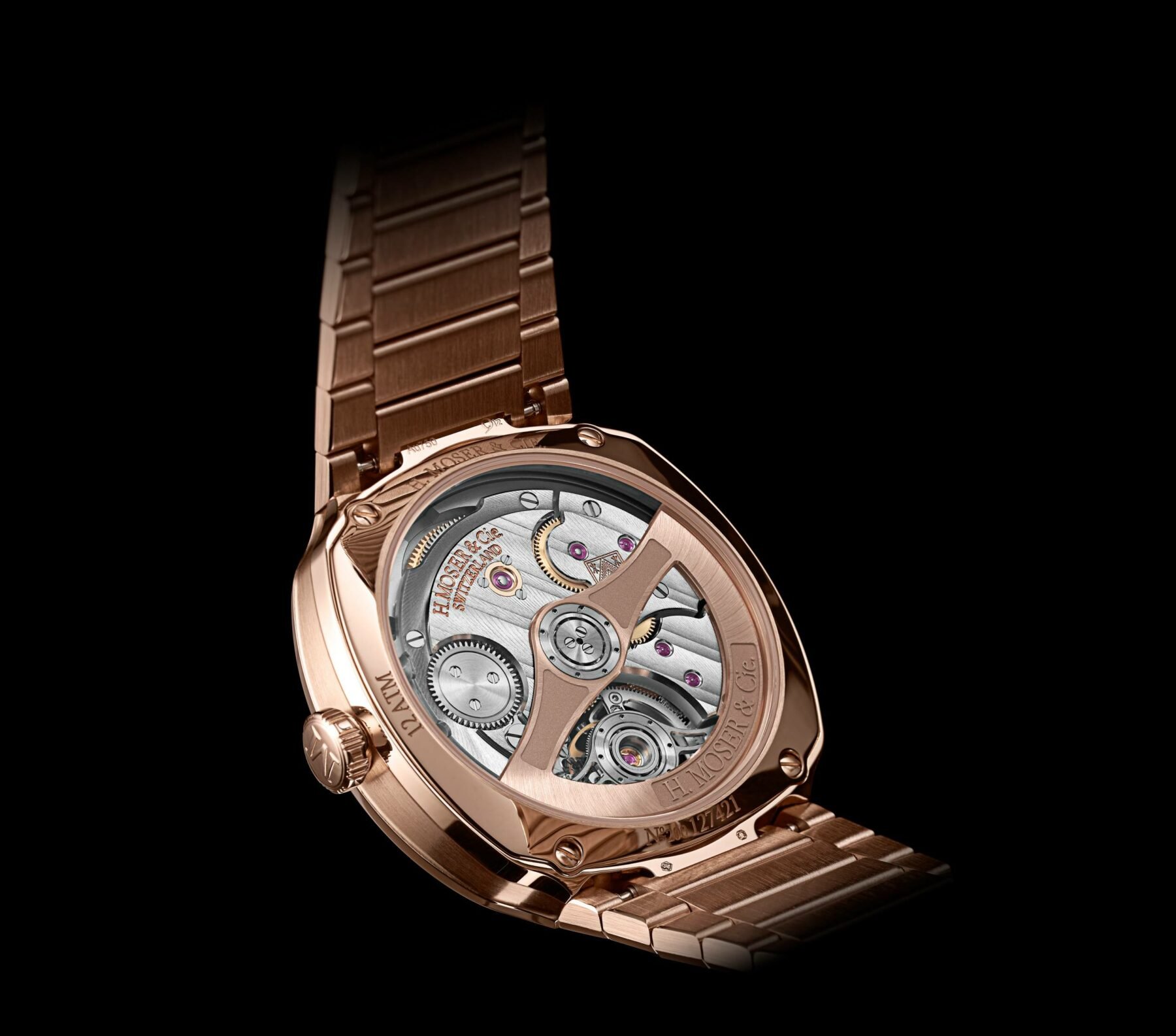 A twirling satellite takes the stage

The star of the HMC804 caliber is the one-minute tourbillon at 6 o’clock. This time, it is more prominent than ever. The indices in red gold to match the case are pure Streamliner all the way. They are, however, vaguer in appearance and shadowy from certain angles. Why? Because you cannot fix them to the Vantablack surface without the risk of damage. Therefore, they are fixed from the back, further enhancing the mystery of the dial. The tourbillon appears as a lone, complex satellite, floating through its one-minute cycle within the darkness.

Turn the watch around, and there is the usual flamboyant blend of technology and craftsmanship…

The patented double-hairspring design is obvious from both sides, improving accuracy and isochronism. Turn the watch around, and there is the usual flamboyant blend of technology and craftsmanship from Moser’s sister company Precision Engineering AG. There is a skeletonized rotor allowing a good look at the movement, but the urge to turn the new Streamliner Vantablack Tourbillon around again will be too much for even the intrinsic detail of the HMC804 caliber to compete with. 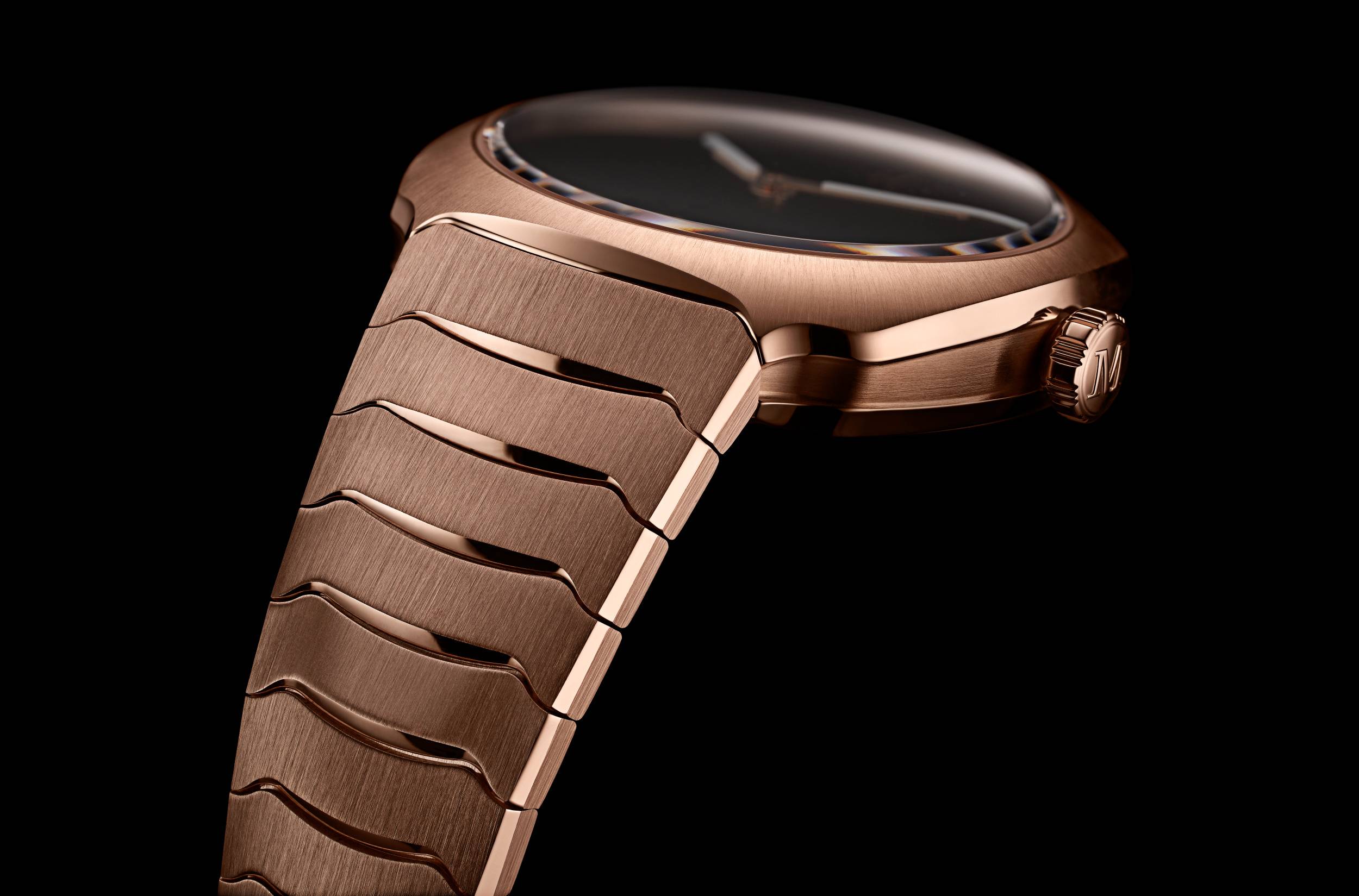 We are used to manufacturers being more restrained when it comes to gold in these days of stealth wealth. Proprietary alloys like Moonshine Gold and brushed rose gold are à la mode. They are more understated, but the 5N red gold in this Streamliner case turns the grail volume up to 11. Even without feeling the slinky bracelet wrapped around my wrist, I know. The extra weight will only add to the feeling of sheer otherness that the Streamliner represents. Furthermore, the intense red tinge of the gold will only serve to make the dark depths within even more pronounced. At €126,000, this top tier of the Streamliner family is a brave, unusual way to celebrate what H. Moser & Cie has come to represent in 2022. It is an avant-garde atelier that once again shows its dial-making forte, ironically, by making the dial disappear. Bravo, Mr. Meylan. 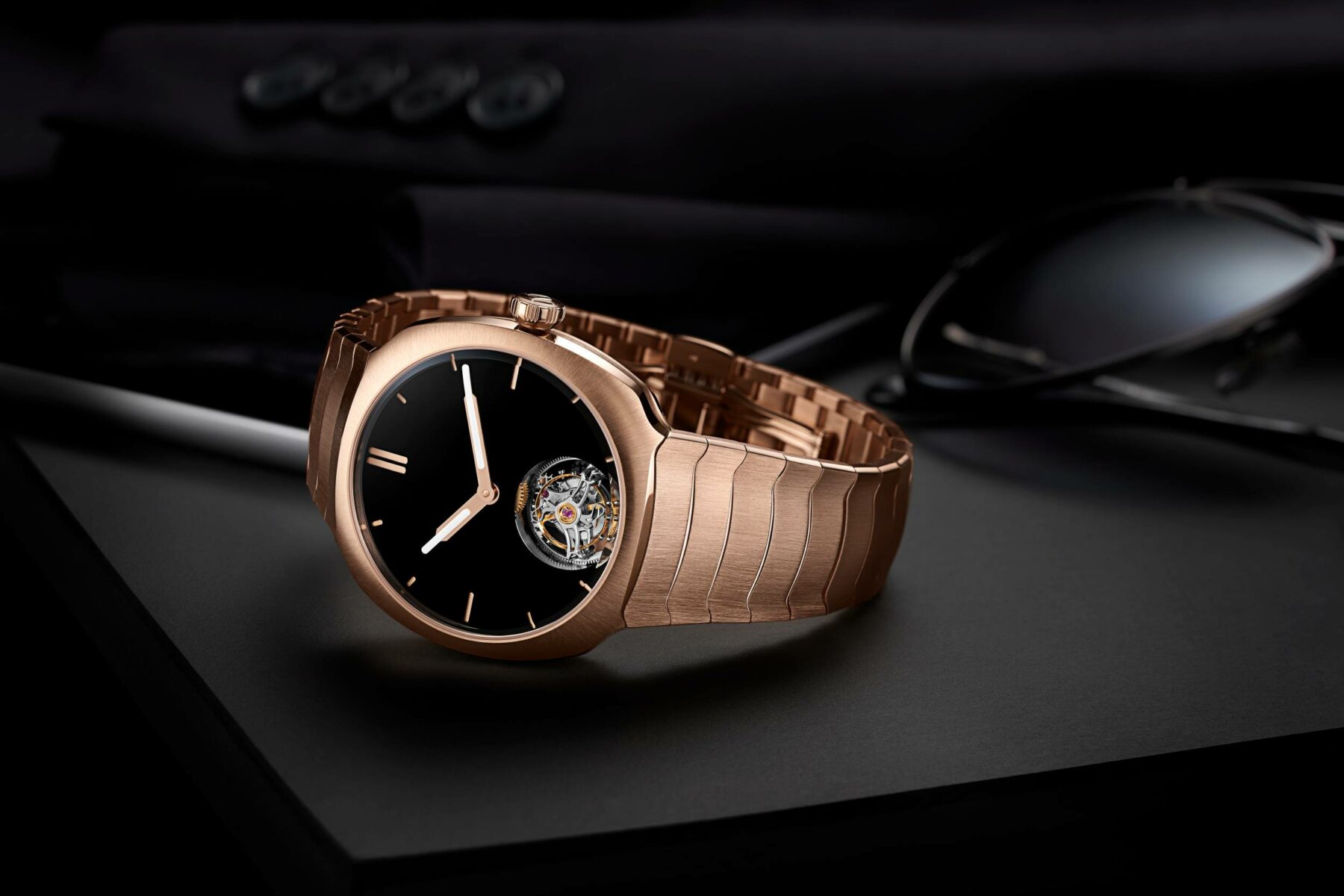 My dear Fratelli, does the new Streamliner Vantablack Tourbillon awaken your dark desires? Is this the ultimate integrated-bracelet grail, or is it a hard pass? Let us know in the comments.

Hot Topics
Introducing: The Omega Speedmaster Super Racing With Spirate System
165 comments
Design Vs. Specs — Which Is More Important To You When Buying A Watch?
87 comments
New Release: The Limited-Edition Seiko Prospex SLA067J1 Diver
64 comments
My Predictions For New Omega Speedmasters In 2023
60 comments
The Best Independent/Microbrand Alternatives To The Rolex Explorer In 2023
53 comments
Popular
Why Are There No Stainless Steel Rolex Watches Available?
Robert-Jan Broer
121
Hands-On With The Seiko SLA019J1 Marinemaster
Robert-Jan Broer
4
Tissot T-Touch Expert Solar II – Not a smartwatch
Balazs Ferenczi
4