Can The 2021 Omega Speedmaster Moonwatch Professional Still Be Considered A Moonwatch?

The launch of the latest Omega Speedmaster Moonwatch generated a murmur amongst Speedy enthusiasts. Voiced around the world, we have seen this question or better said, remark, popping up quite frequently. So I am here today to try and address the burning question: can the current Omega Speedmaster Moonwatch still be considered a Moonwatch? And while I’m at it, I’ll be looking at other Speedmasters to see how they hold up when faced with this same scrutiny.

In getting right to the point regarding the latest Speedmaster released by Omega earlier this year, the short answer is quite simply “no”. Strictly speaking, the Speedmasters that were worn on the moon were references 105.003, 105.012, and 145.012. These watches were equipped with the iconic caliber 321 chronograph movement, and hold a number of differences to the most modern reference of today. So, when interpreting this question in the strictest possible sense, it would be only those three references that could be considered true Moonwatches. However, a broader understanding allows for some wiggle room for where we can apply the term. 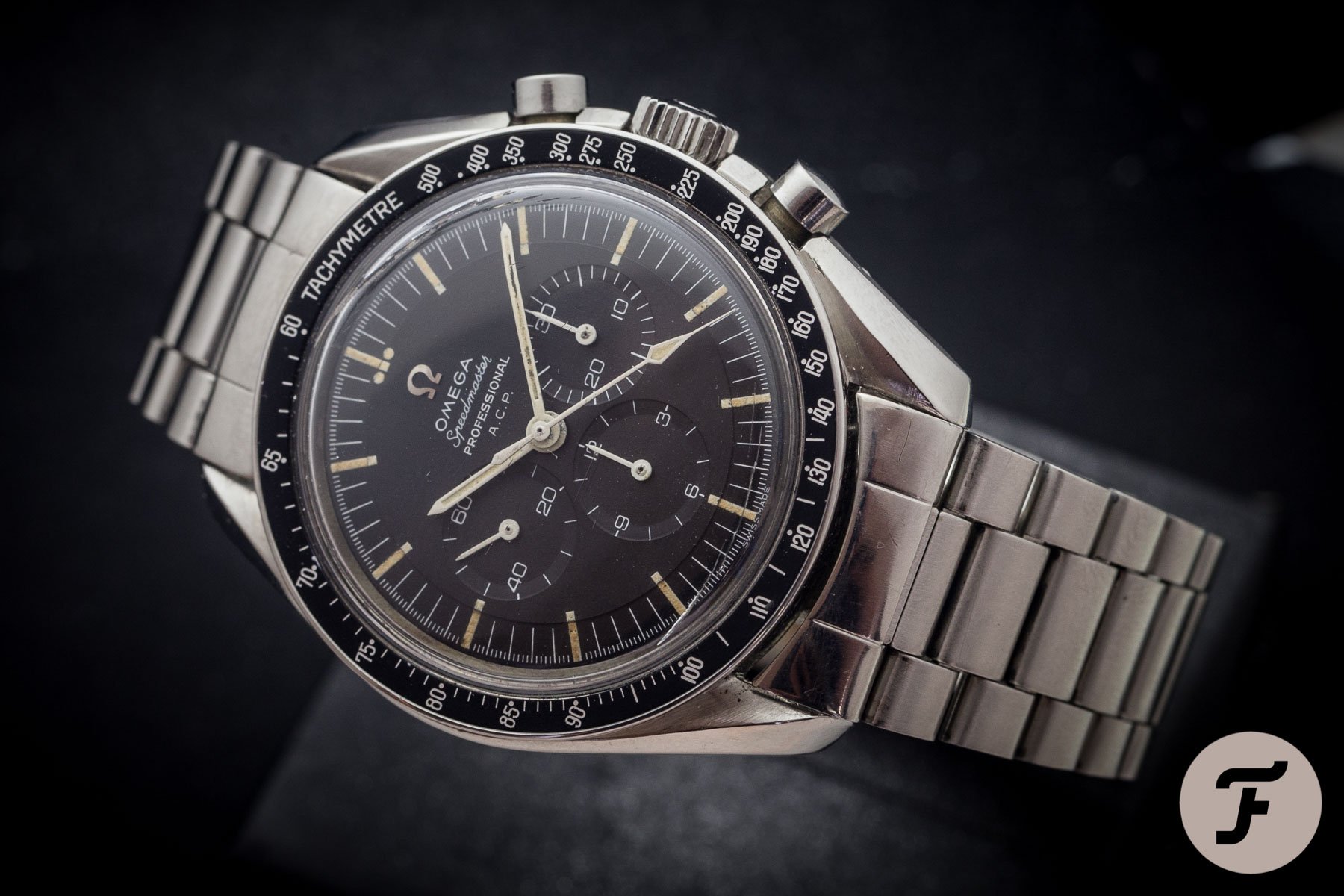 Is the Omega Speedmaster Professional still a Moonwatch?

Let’s have a closer look at the evolution of the Speedmaster Professional and see if this chronograph still has Moonwatch bragging rights. 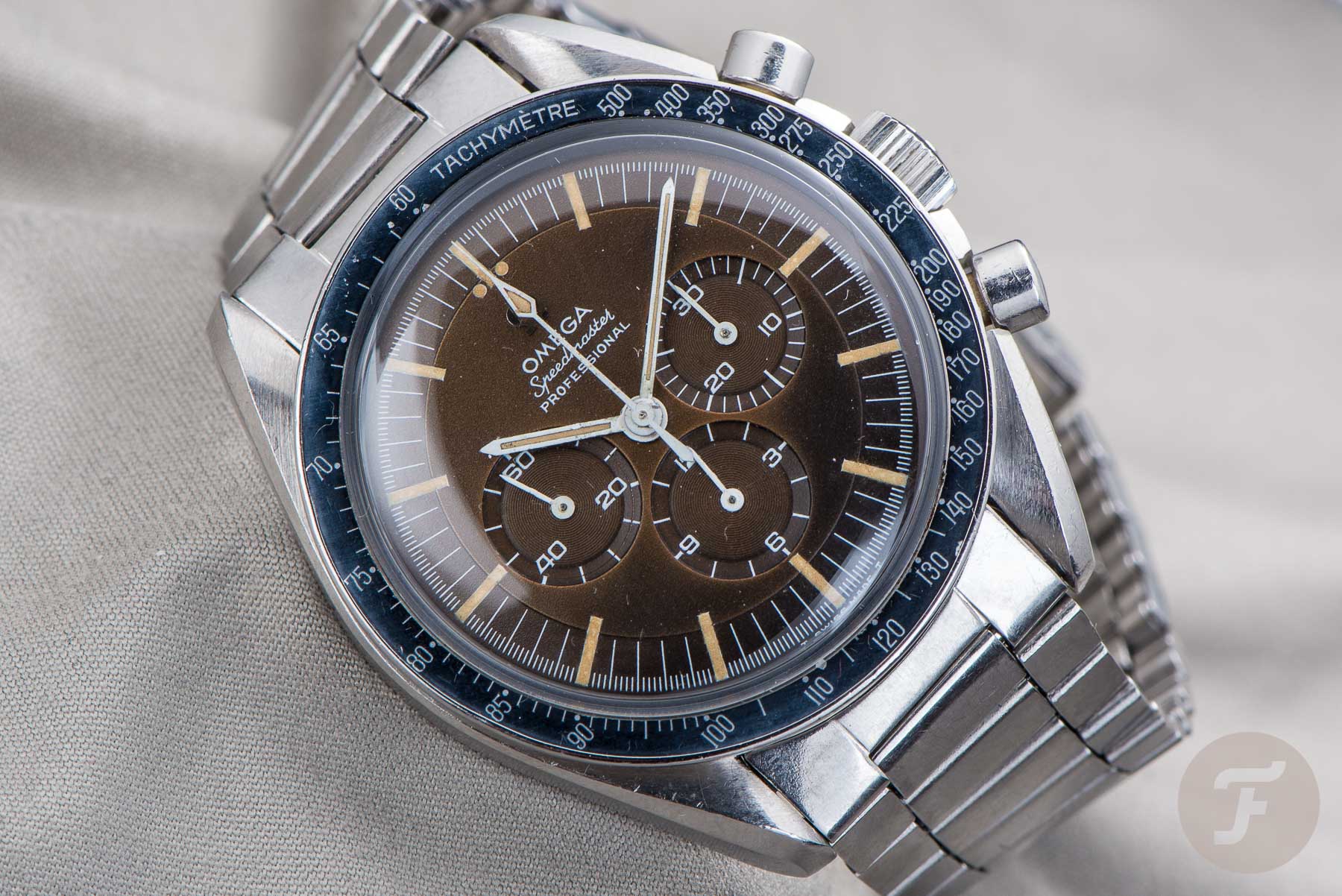 The successor to the 4th generation of Speedmasters (ref. 105.012 and 145.012), the Speedmaster Professional reference 145.022, was introduced in 1968 and featured some small changes. For example, on the dial (except for the first iteration of the 145.022) where there was no more applied logo. The hands were also different, but the most important change was a new movement. It was equipped with caliber 861. Instead of a column-wheel mechanism, caliber 861 uses a shuttle-cam system for the chronograph operation. Also, the frequency increased from 18,000 vph to 21,600 vph for higher stability (and therefore accuracy). Interestingly, this watch was never shipped to NASA for use during Apollo missions. Only the caliber 321 models of that time were sent to NASA. 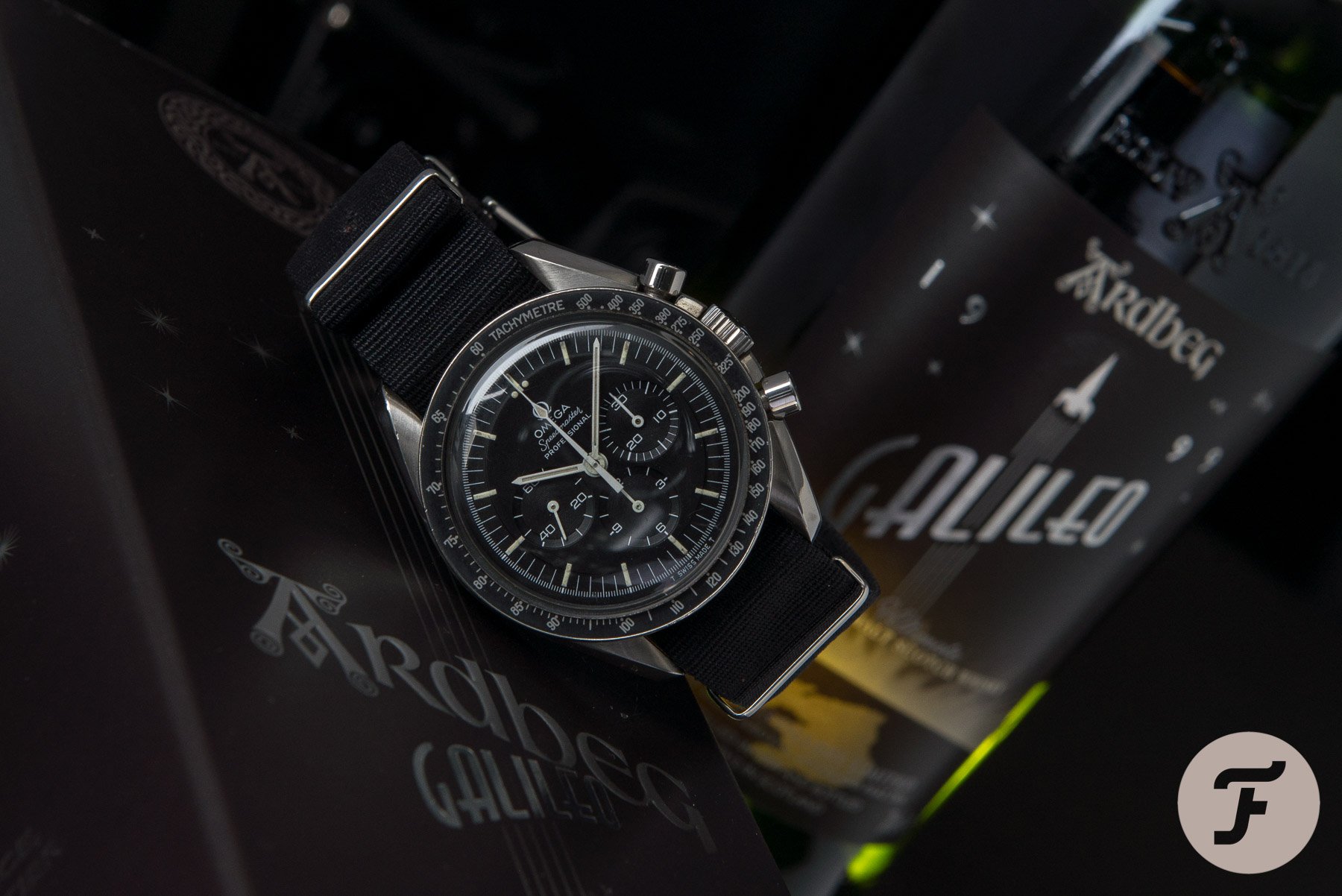 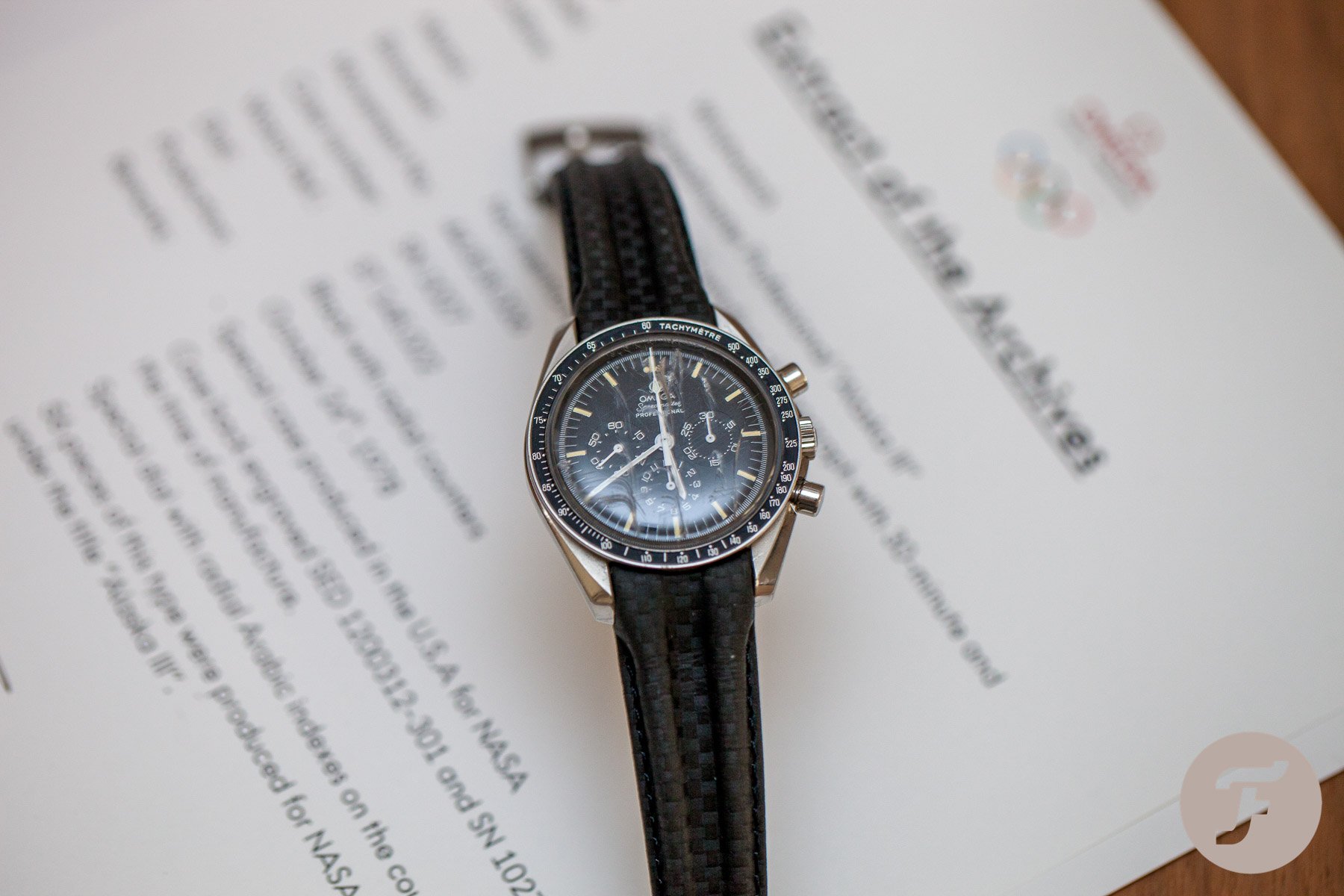 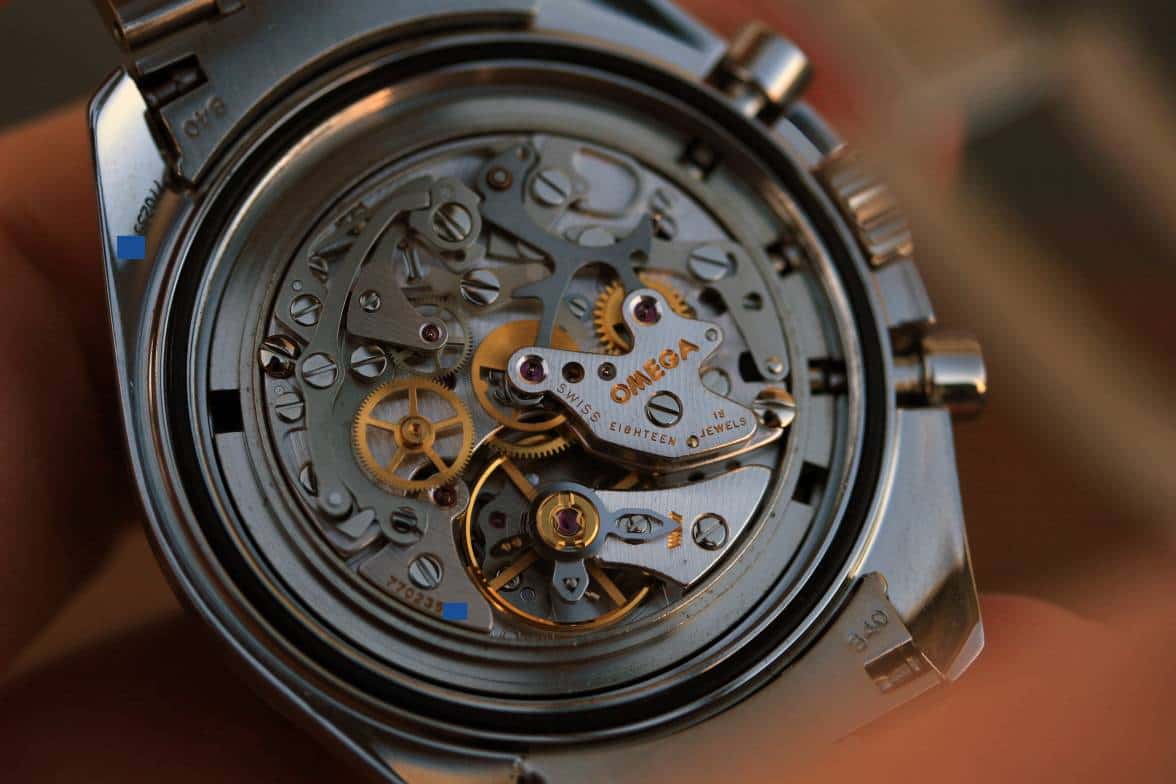 The caliber 1861 makes its debut

Until 1996, Omega used caliber 861 for the Speedmaster Professional Moonwatch. There were some exceptions, however. Such as the more nicely decorated 863 movements and the chronometer-certified caliber 864 movements. Also part of the exception is the caliber 866 with an additional moon phase and calendar complication. After that, Omega started using caliber 1861. This movement was nearly identical to the very last iteration of the caliber 861 (there’s some degree of variation in this movement from its introduction until its discontinuation). The movement had a rhodium finish and an extra jewel (also there in the last iteration of caliber 861) but still used the Delrin brake, for example.

The specifications also didn’t really change. The layout of the chronograph remained the same and the performance was also within -1/+11 seconds per day on average. This watch has not been used on the moon, but the Omega Speedmaster Professional Moonwatch caliber 1861 has been used in space, as described above. I never found much discussion on the fact this watch was called the Moonwatch without having ever been on the moon. It also never went up for testing or qualification by NASA for any space program. You might say that the differences between the 861 and 1861 calibers are so small, they can be neglected for the purpose of this article. 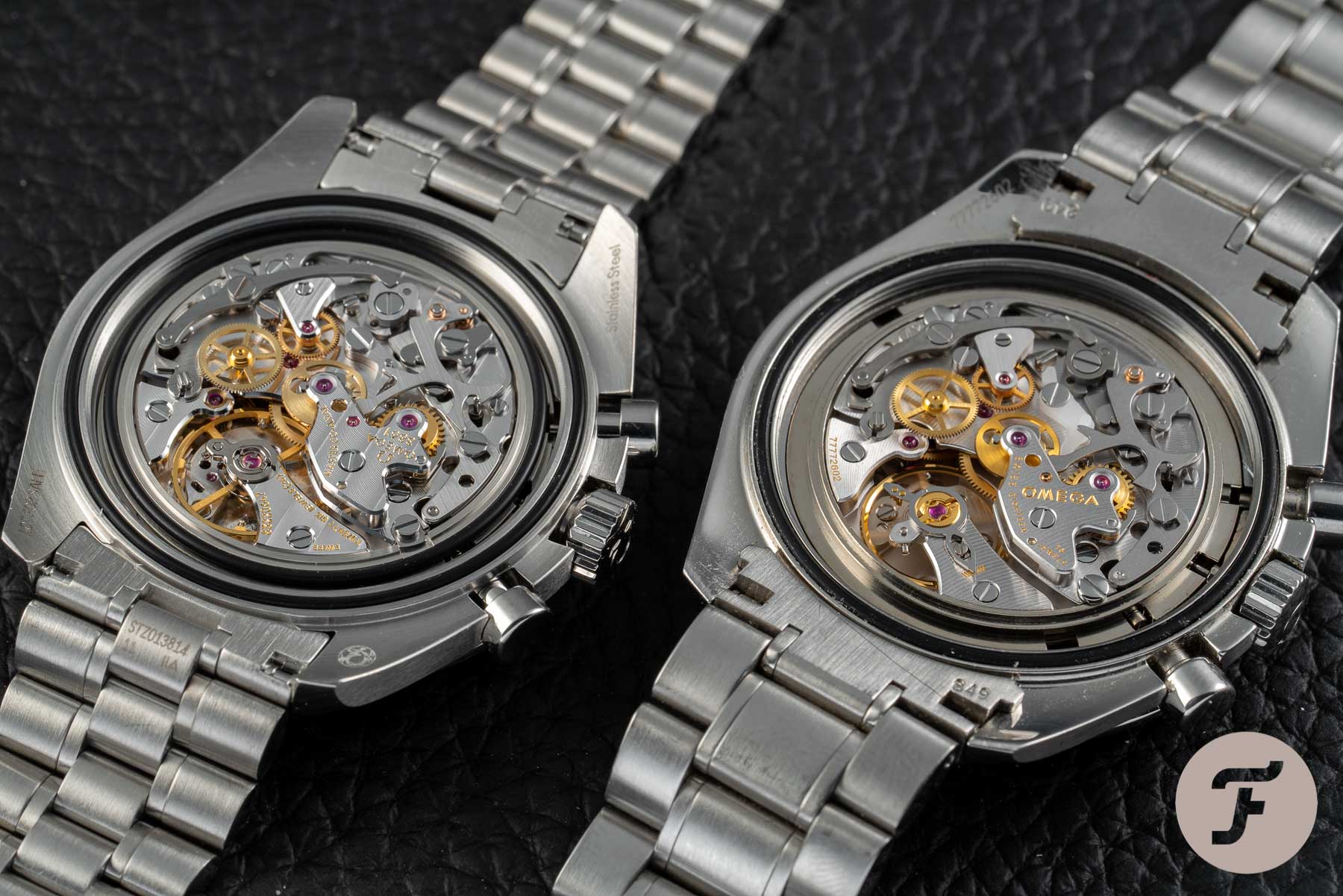 Caliber 3861 on the left, caliber 1861 on the right. You can clearly see the similarities.

Now, enter 2021. Omega introduces the new Speedmaster Professional reference 310.30.42.50.01.001 (version with the Hesalite) and three other variations. Omega brought back the exact same case design as the reference 105.12, a step-dial, the Dot-Over-Ninety bezel, the typical drop-counterweight chronograph second’s hand, and the case back with an extra bevel. You can read about the biggest changes compared to its predecessor here. But in general, the new caliber 3861 triggered the discussion of whether this watch can be called a Moonwatch. 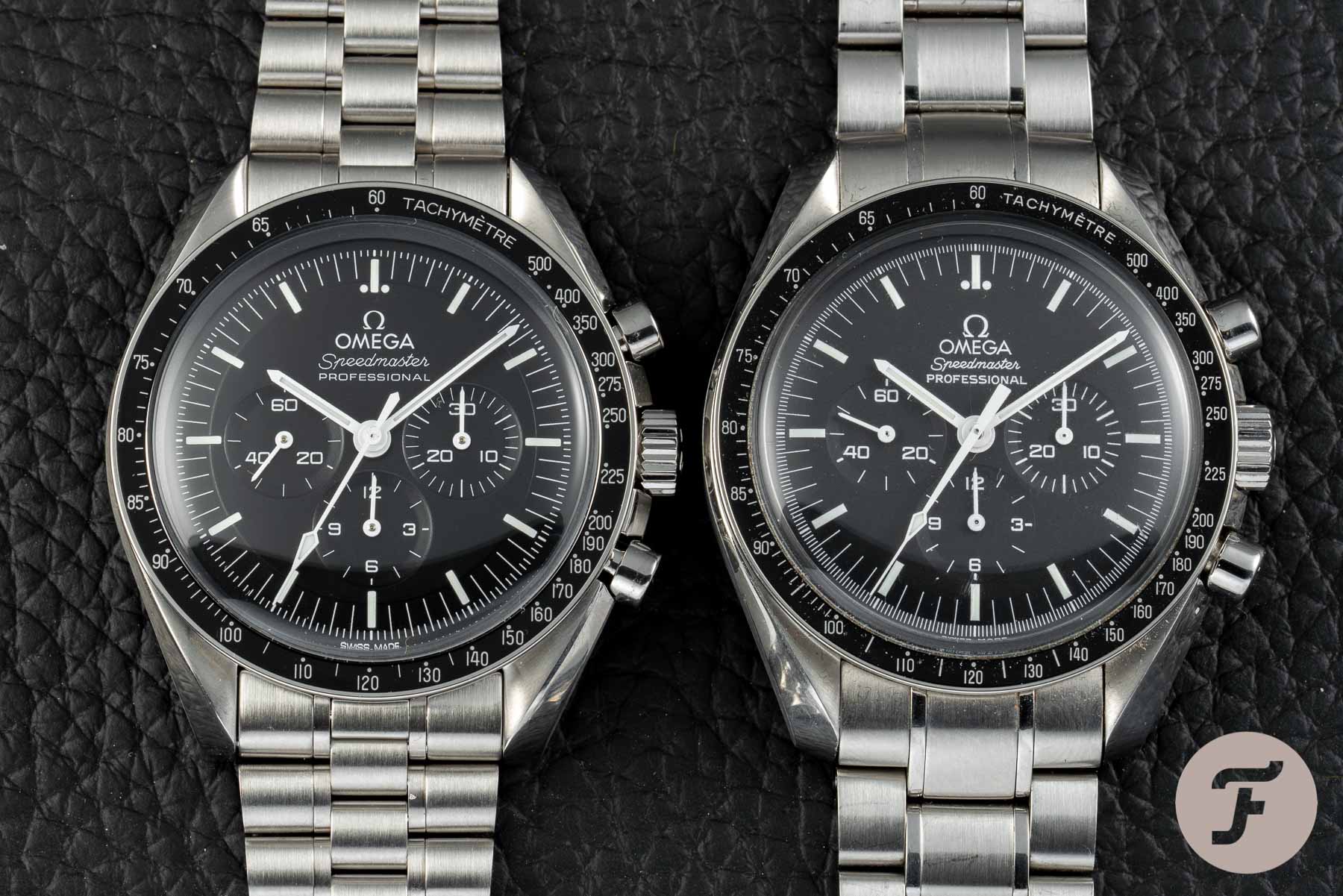 This movement is based on Omega’s caliber 1861, which is in its turn based on the Lemania 1871. The layout of the movement remained the same (very important, also for the dial design), with subdials that are exactly 6.7mm from the center pinion, for example. The movement received a new (Co-Axial escapement) and it uses parts of non-magnetic alloys to meet the Master Chronometer requirement for being anti-magnetic up to > 15,000 gauss. 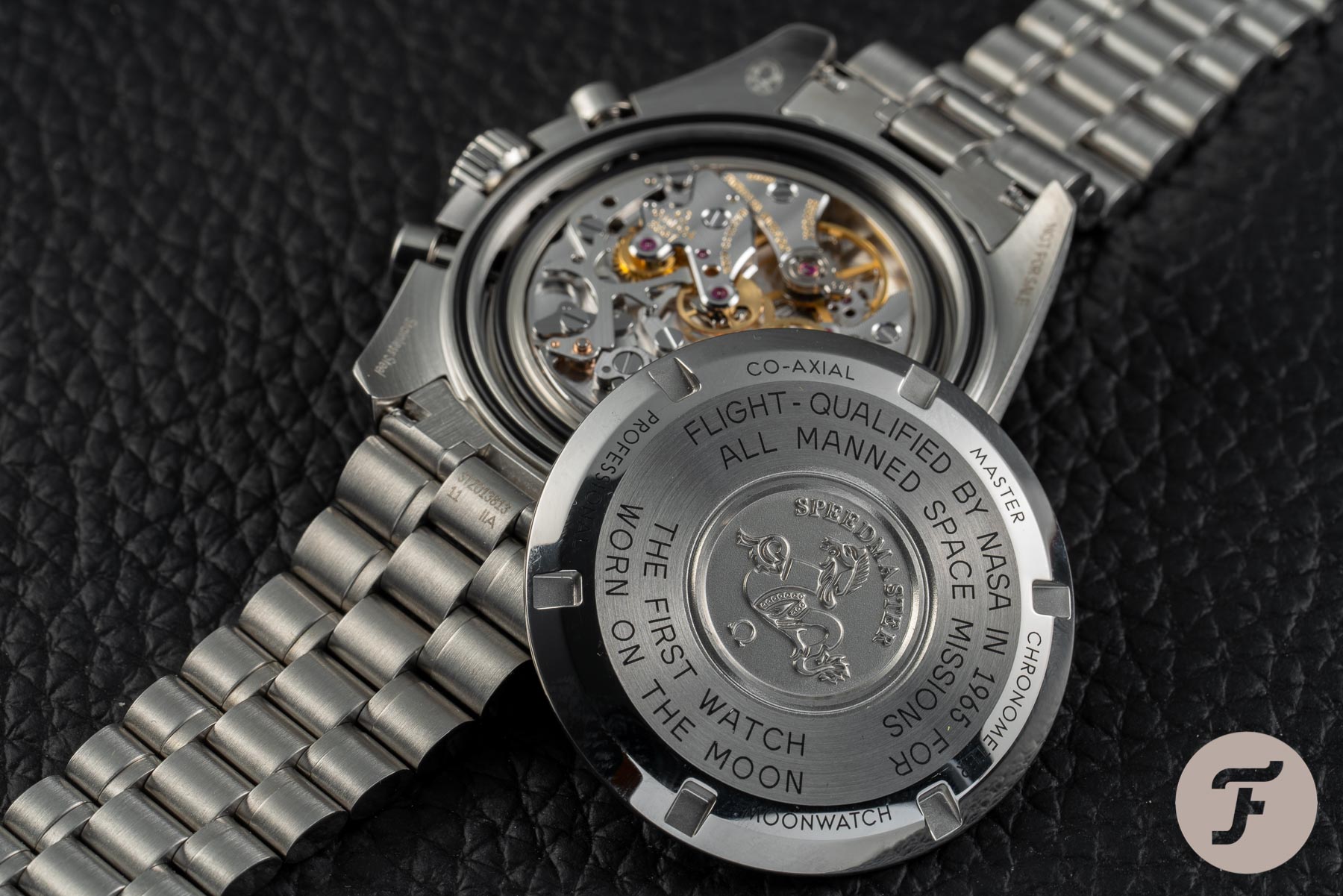 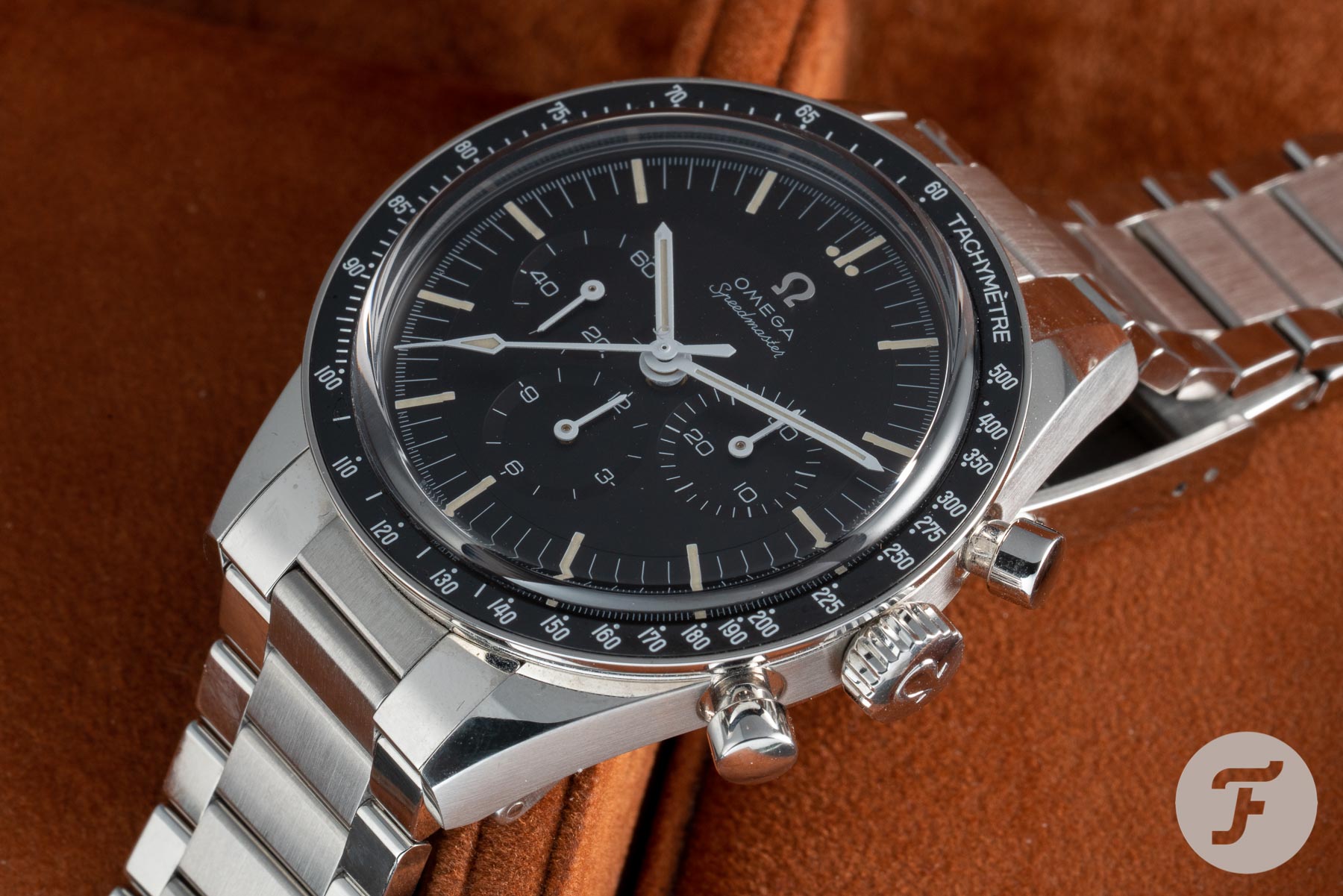 Is the Speedmaster Calibre 321 a Moonwatch?

Let me add another Speedmaster to the mix. Omega introduced its Speedmaster Calibre 321 reference 311.30.40.30.01.001 last year, and it is inspired by the Speedmaster reference 105.003 worn by astronauts like Ed White. The 105.003 was also the last watch worn on the Moon, on the wrist of Gene Cernan. His watch — now in the Omega Museum in Biel — was scanned (using tomography) to retrieve CAD files for rebuilding the exact same watch (and caliber 321). 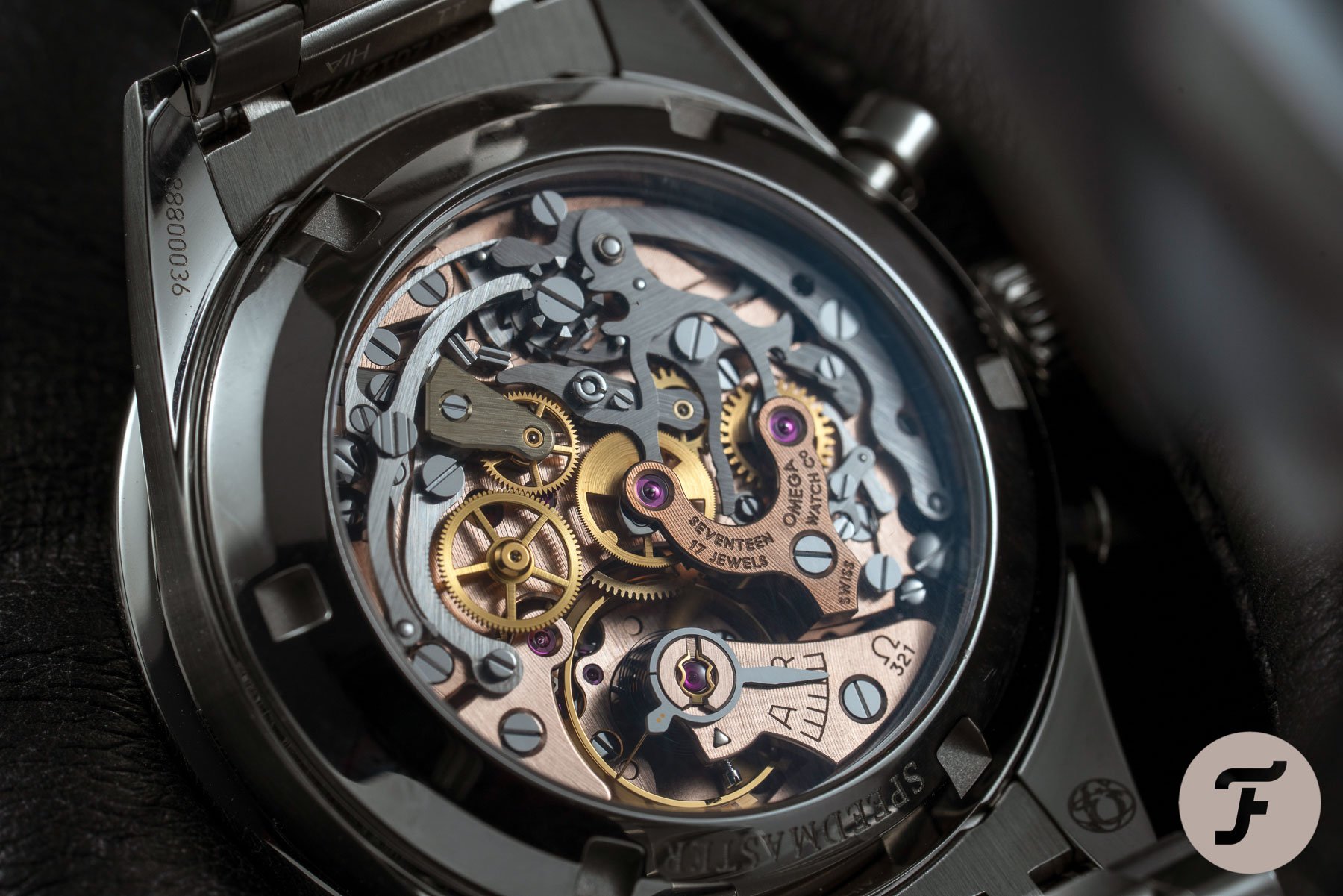 Is the Speedmaster Calibre 321 therefore more worthy of the Moonwatch name? If the movement is holding you back when it comes to calling the new Speedmaster Professional a Moonwatch, it shouldn’t be the case for the Speedmaster Calibre 321. Admittedly, the new “105.003” uses a sapphire crystal and a ceramic bezel, components that were different from the original Moonwatch with this reference. But would these small changes be enough to strip it of its title? 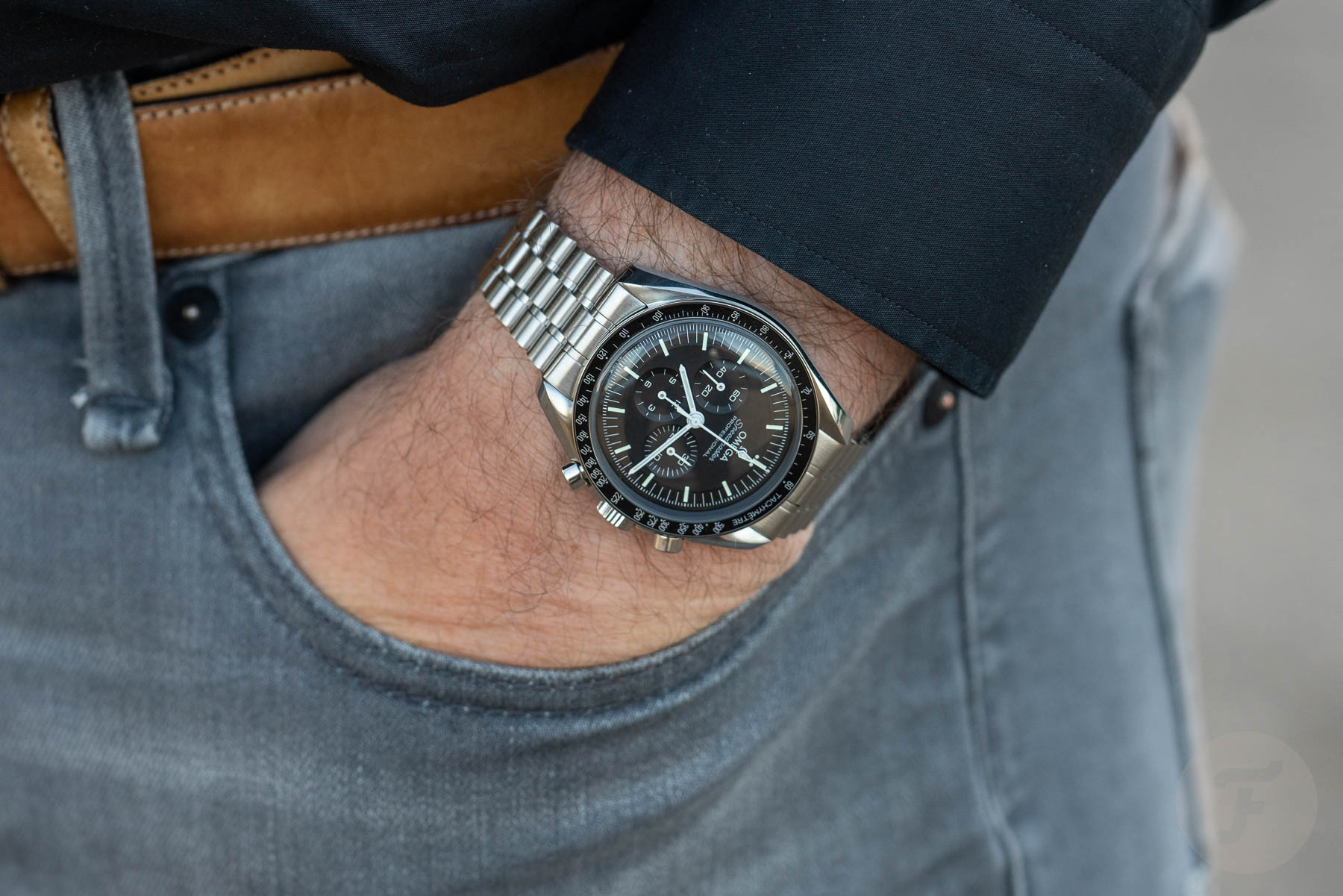 Now that I’ve drawn a quick picture of the Moonwatch and its evolution, does it change the short answer I had at the beginning of the article? Well, technically speaking it is still not the Moonwatch. I would say that this is reserved for the Speedmaster references 105.003, 105.012, and 145.012. But I am totally fine with calling this watch a Moonwatch. It is a direct descendent of the Moonwatch, and its new design shares more design cues with the Omega Speedmaster Moonwatch from the 1960s than the previous contemporary references did. It’s a tribute to those Speedmasters that were used on the Moon, and aside from the movement, it comes pretty darn close. So I put it up to you — should the Moonwatch title be granted to the new Omega Speedmaster Professional? Let me know in the comments below.

More information can be found on the official Omega website.