How far can you push the boundaries of traditional watch design? Milan-based brand Unimatic has been pushing the boundaries of traditional watch design with its clever approach to aesthetics. As most of you will know, I really like the approach to design that Unimatic owners Giovanni Moro and Simone Nunziato have chosen for their watches. After several spectacular collaborations, it’s time for a new design step within Unimatic’s own collection of releases. The all-new Unimatic S-series takes the minimalistic approach even further. On top of that, the four models that make up the S-series are powered by Sellita movements.

It’s no secret that I am a fan of Unimatic’s unique approach to watches. Their Modello Uno U4-F was my most worn watch of last year. And I adore its minimalist brother, the Modello Uno U4-FN. I love how Moro and Nunziato push the boundaries of traditional watch design. The two Italian men behind the Unimatic brand are industrial designers by trade, and it explains their love for exploring the possibilities of what is possible. In an interview with Moro, he explained that their journey started with exploring how to take away unnecessary decoration and see how far you can push that idea. 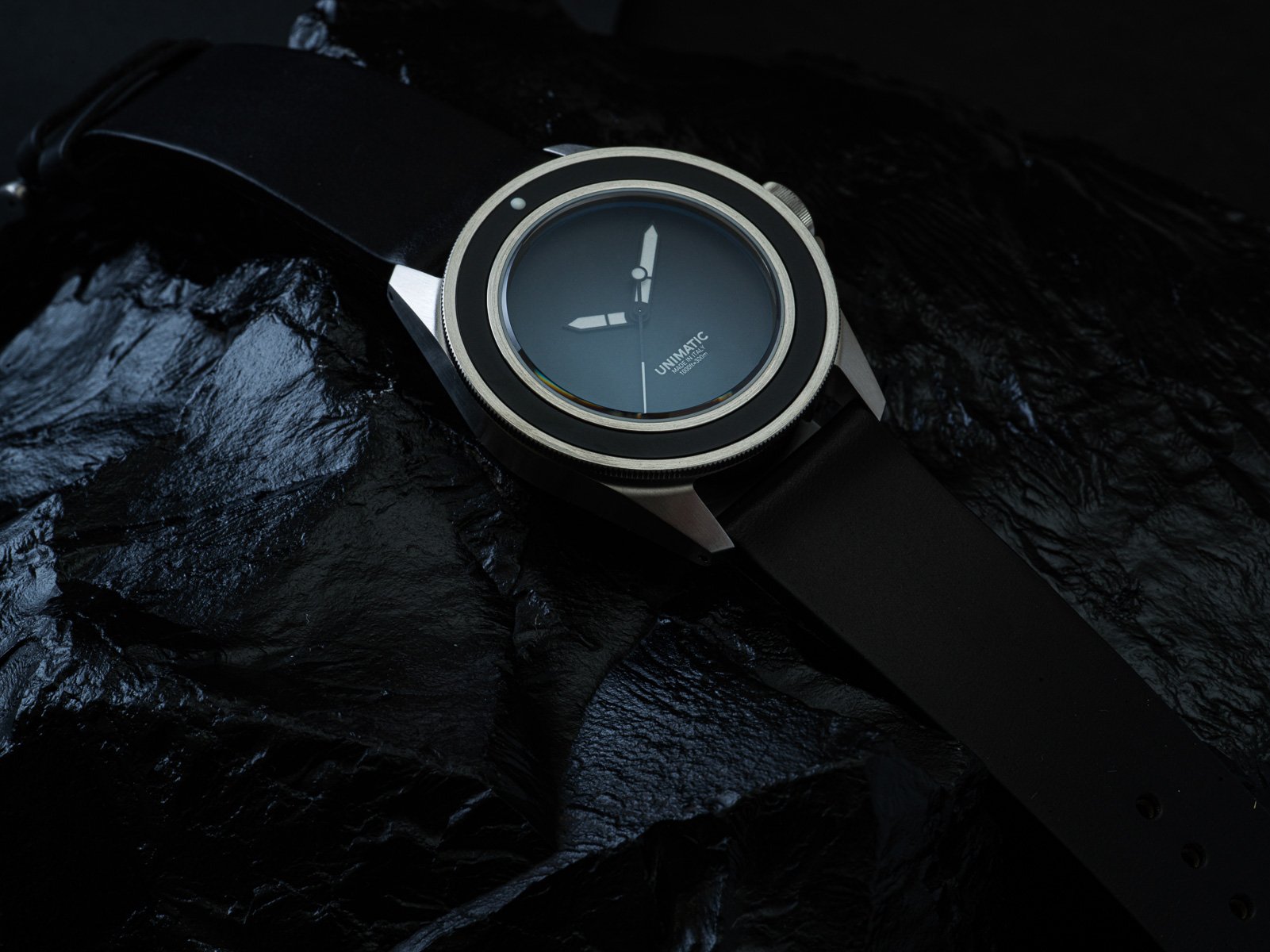 The idea behind the S-series

In a new step of pushing those boundaries, the brand today introduces its most minimalist series of watches. The Unimatci S-series consists of two Modello Uno models and two Modello Due models. All four watches are equipped with a matte black “blank” dial that only features the glow-in-the-dark Unimatic logo. Hovering above the dial are the black hands filled with white C1 Super-LumiNova. Additionally, the two Modello Uno models feature a full black bezel insert with only the pip that also lights up in the dark. The result is a series of ultra-stealthy watches whose minimalist design approach highlights the bare essentials you need to keep track of time at all times during the day. 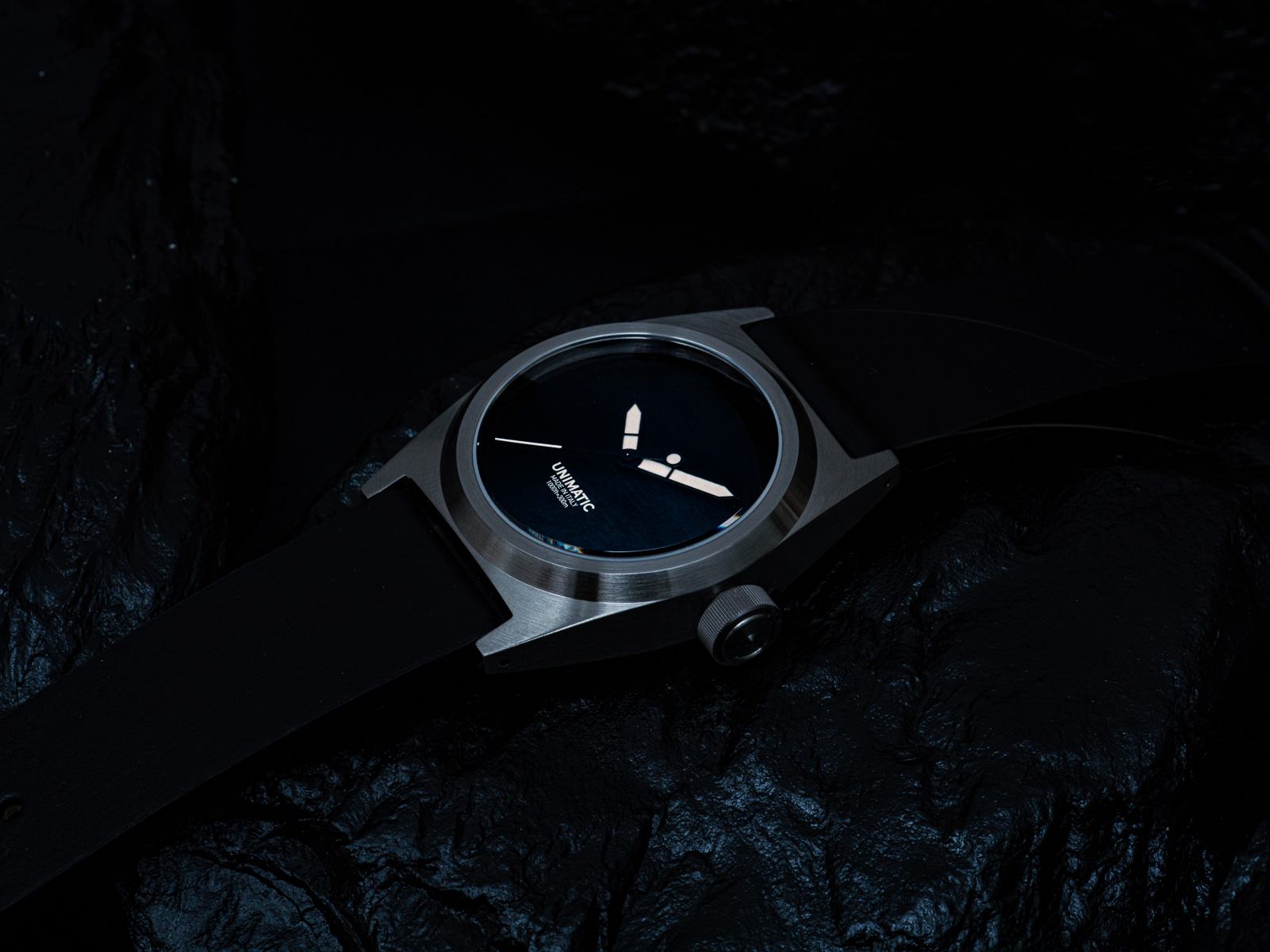 The new S-series is equipped with Swiss Sellita movements for an upgrade on the technical front as well. Unimatic used Selitta movements before for their H-series created with Hodinkee that was released in the summer of last year. All four models are powered by automatic Sellita SW200-1 movements for this series, assuring a step up in terms of accuracy. At the same time, the use of Sellita movements has made it possible to use cases for both models that are 10% thinner than previous models. All four models feature a slim profile under 12mm, ensuring great wearability. Additionally, the cases feature drilled lugs for easier strap changes; let zoom in and have a closer look at all four individual models. 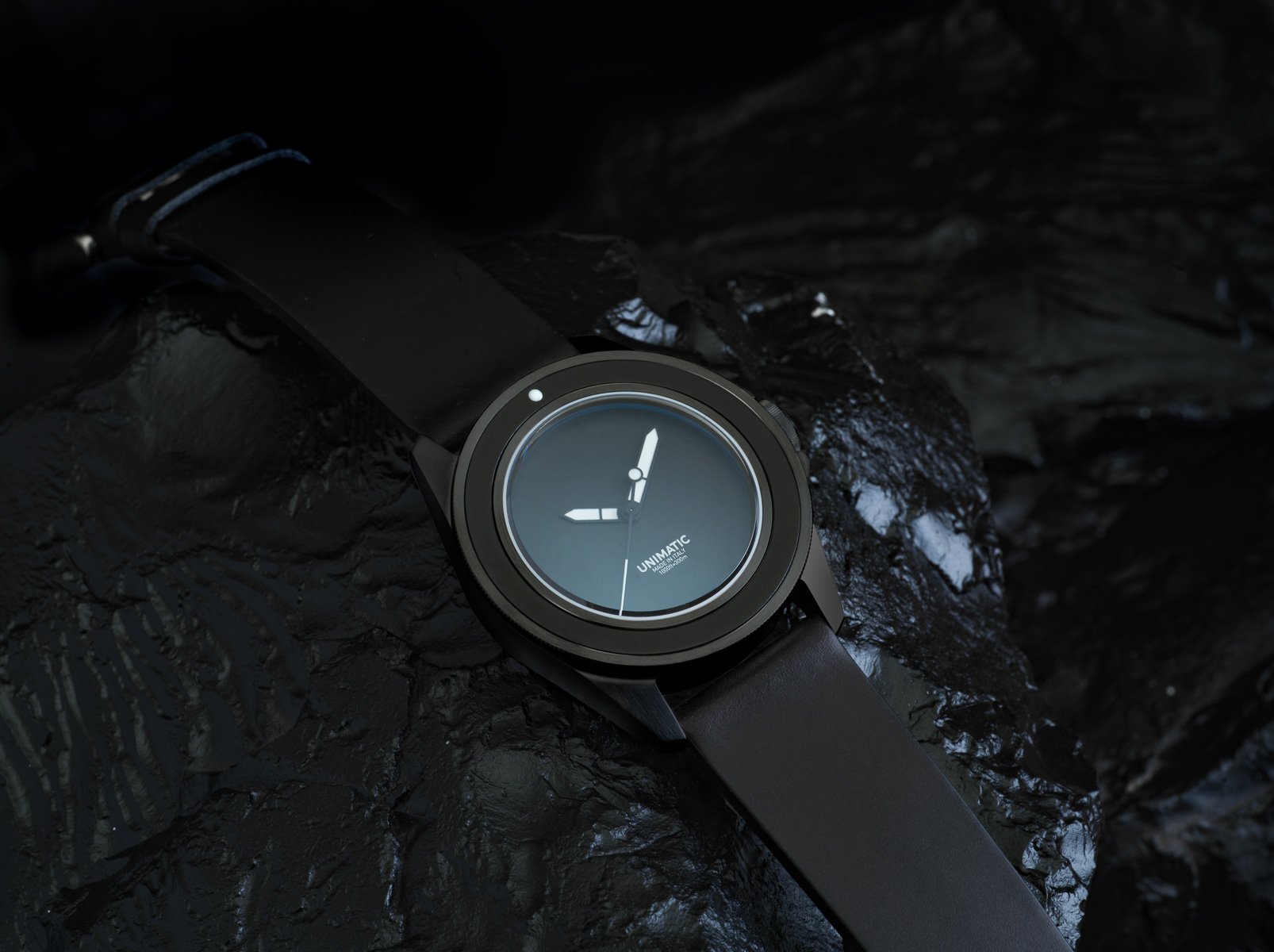 The Modello Uno is Unimatic’s take on modern minimalist diving watches. The two Modello Uno models feature a 40mm case with a slightly bigger bezel that is 41.5mm. The height has been reduced to 11.6mm compared to the 13.6mm of previous models. The case measures 49mm lug-to-lug and has a lug width of 22mm. Both watches are water-resistant up to 300 meters. From experience, I can say that the modern case shape is easy to wear and fit a great variety of wrist sizes. With an even slimmer profile, the comfort levels are probably increased to even higher levels. 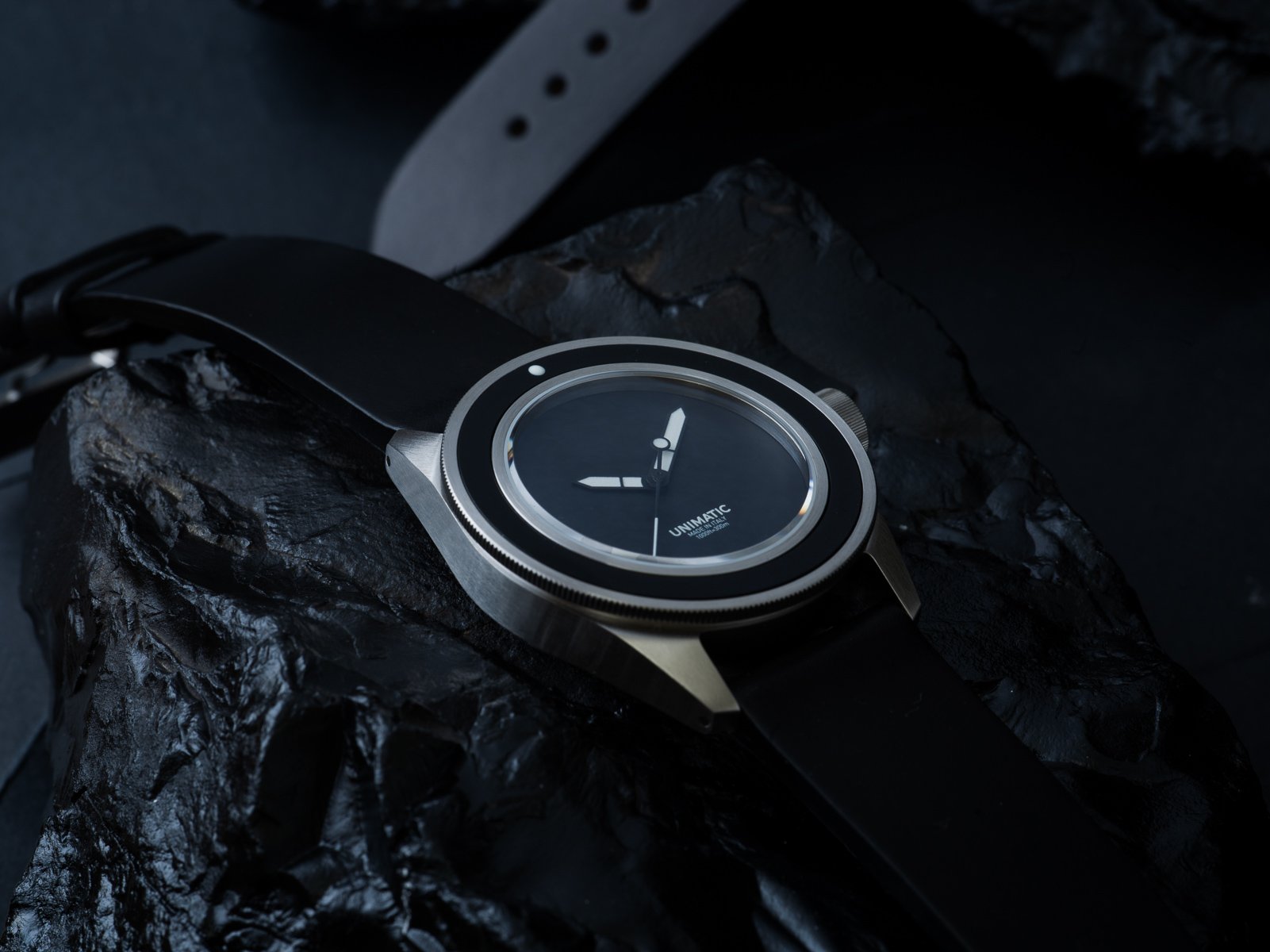 The Modello Uno U1S-M is the first of the two models equipped with a stainless steel version of the case. Combined with the full black dial and bezel insert, it creates a very minimalist iteration of the Modello Uno. The second of the two Modello Uno models is the U1S-MN and takes the minimalist approach even further. The watch features a black DLC-coated case resulting in the most minimalist and stealthy-looking watches the brand has ever produced. Both watches come with an Italian calf leather strap and a black nylon ‘Seatbelt’ strap. 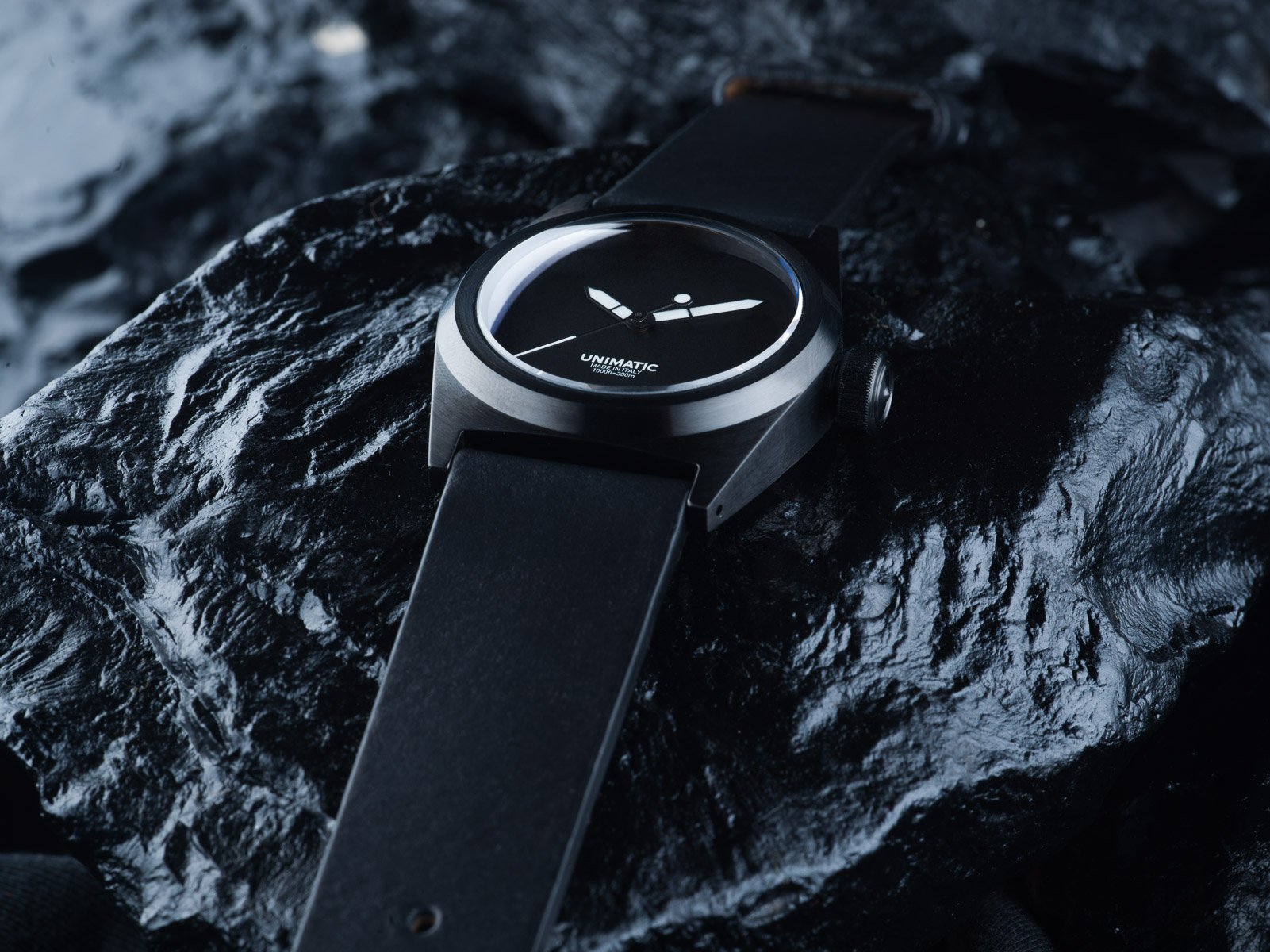 The Modello Due S-series models 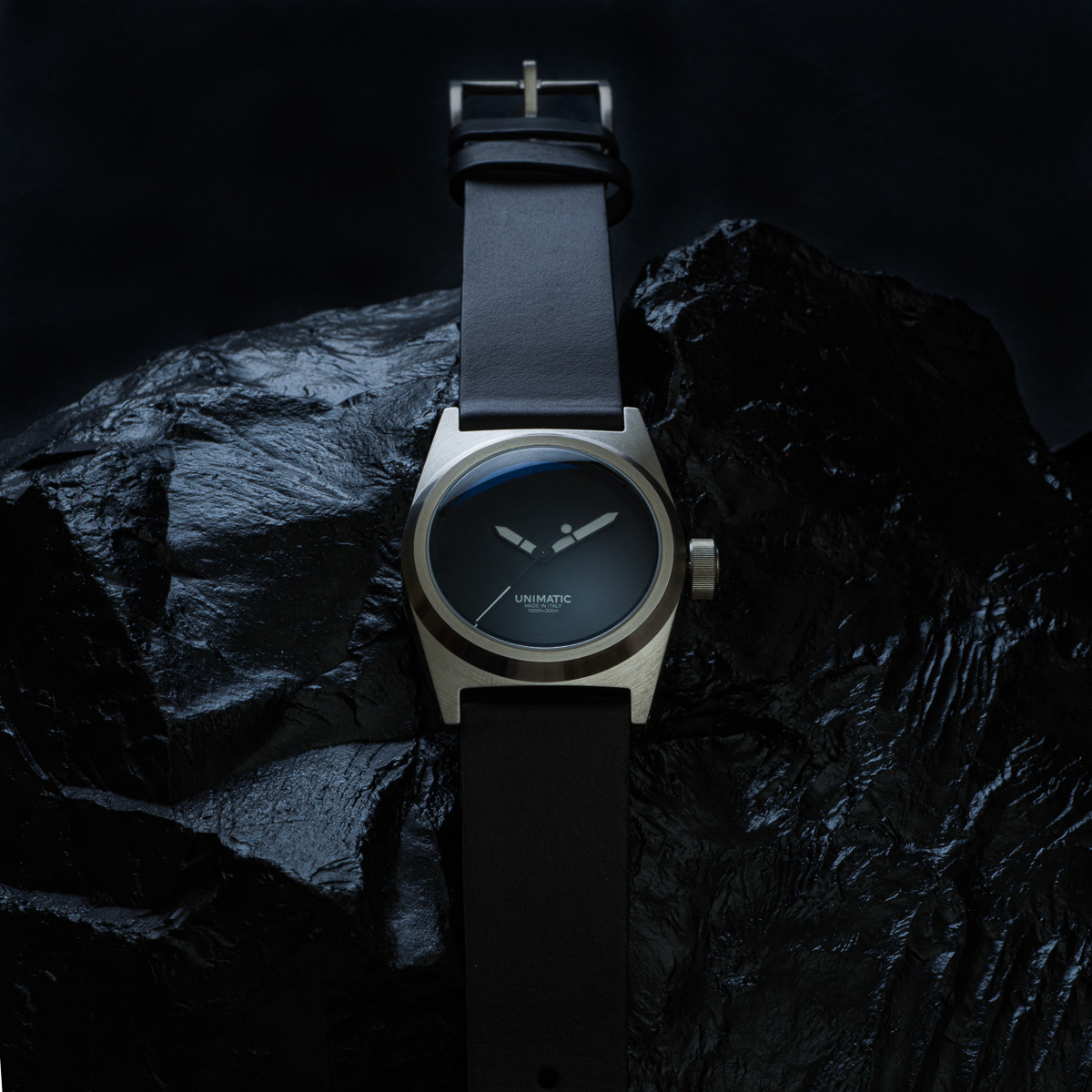 Just like with the Modello Uno, there are two case variations. The Modello Due U2S-M is the model with a regular stainless steel case. The U2S-MN is the second model and comes equipped with a black DLC-coated case for a fully blacked-out look. Like both Modello Uno models, the watches come with an Italian calf leather strap and a black nylon ‘Seatbelt’ strap. 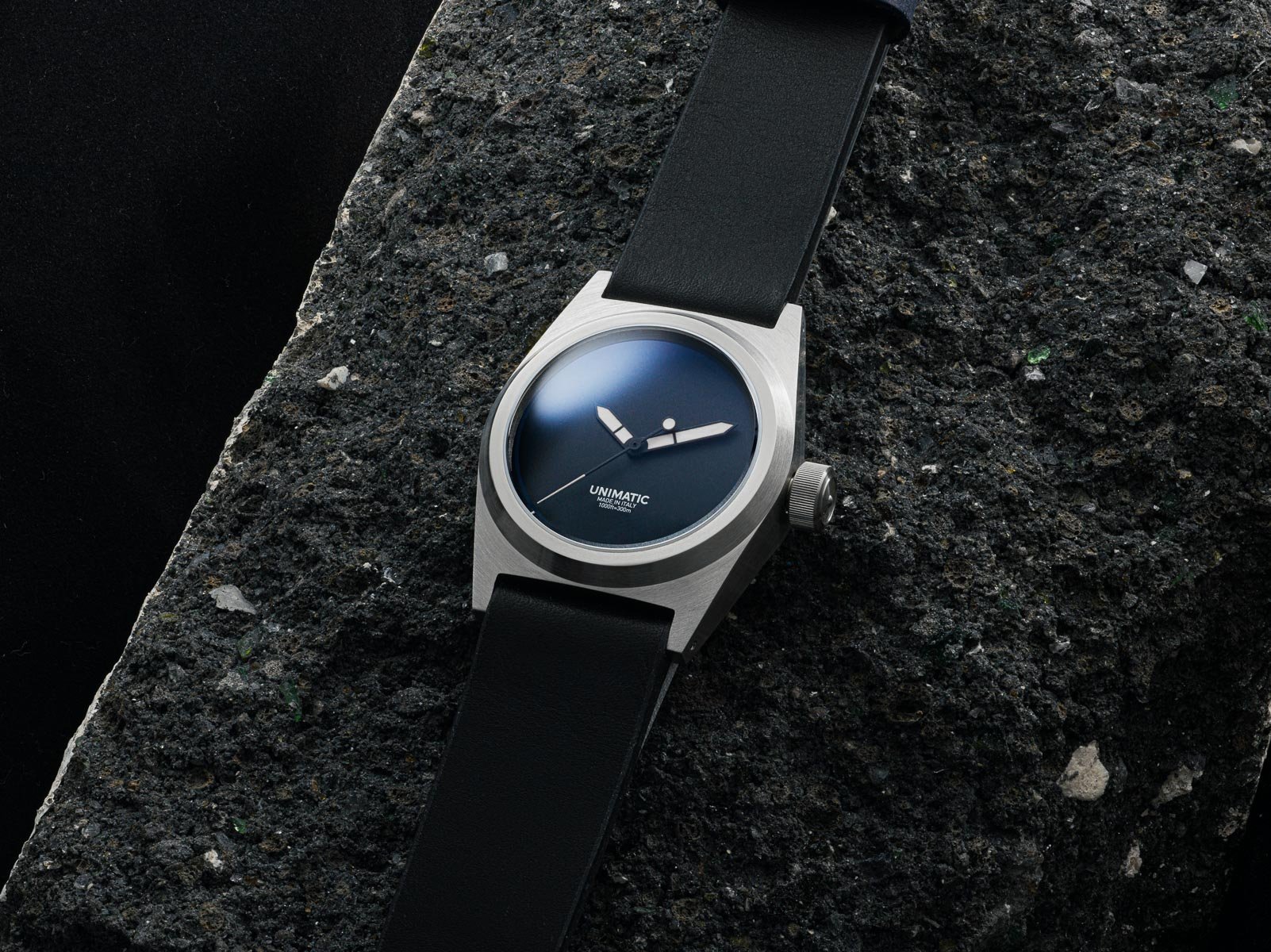 As mentioned, Unimatic used Sellita movements for their collaboration series with Hodinkee. It was a move that many watch enthusiasts applauded. For this new series, the brand has again chosen to use Sellita movements. The caliber of choice is the automatic Sellita SW200-1. This movement operates at 28,800vph, features 26 jewels, and comes with a 38-hour power reserve. The movement features bi-directional winding and hacking seconds. The Sellita SW200-1 accuracy is defined as +/- 12 to 30 seconds per day. 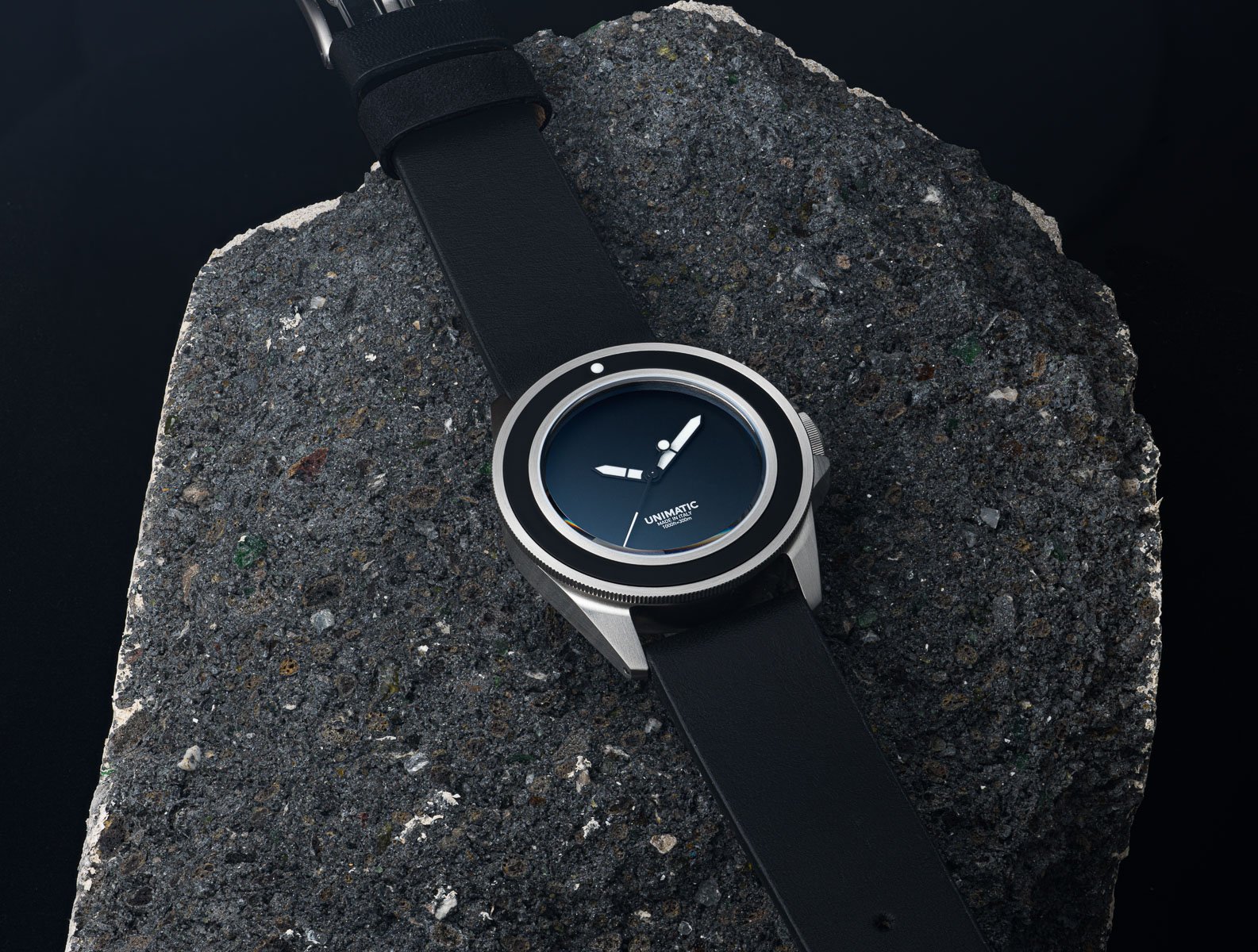 Furthermore, the upgrade in movements from the Seiko NH35 movements to Sellita movements will probably please many enthusiasts. It will be interesting to see whether the brand will use Sellita movements steadily for future releases. For now, it is an upgrade that I like seeing, and it is on par with the developments within the world of smaller independent brands that create affordable watches. We see increasingly more Sellita powered watches from smaller brands, so it makes sense that Unimatic also decided to source movements from the Swiss movement manufacturer. 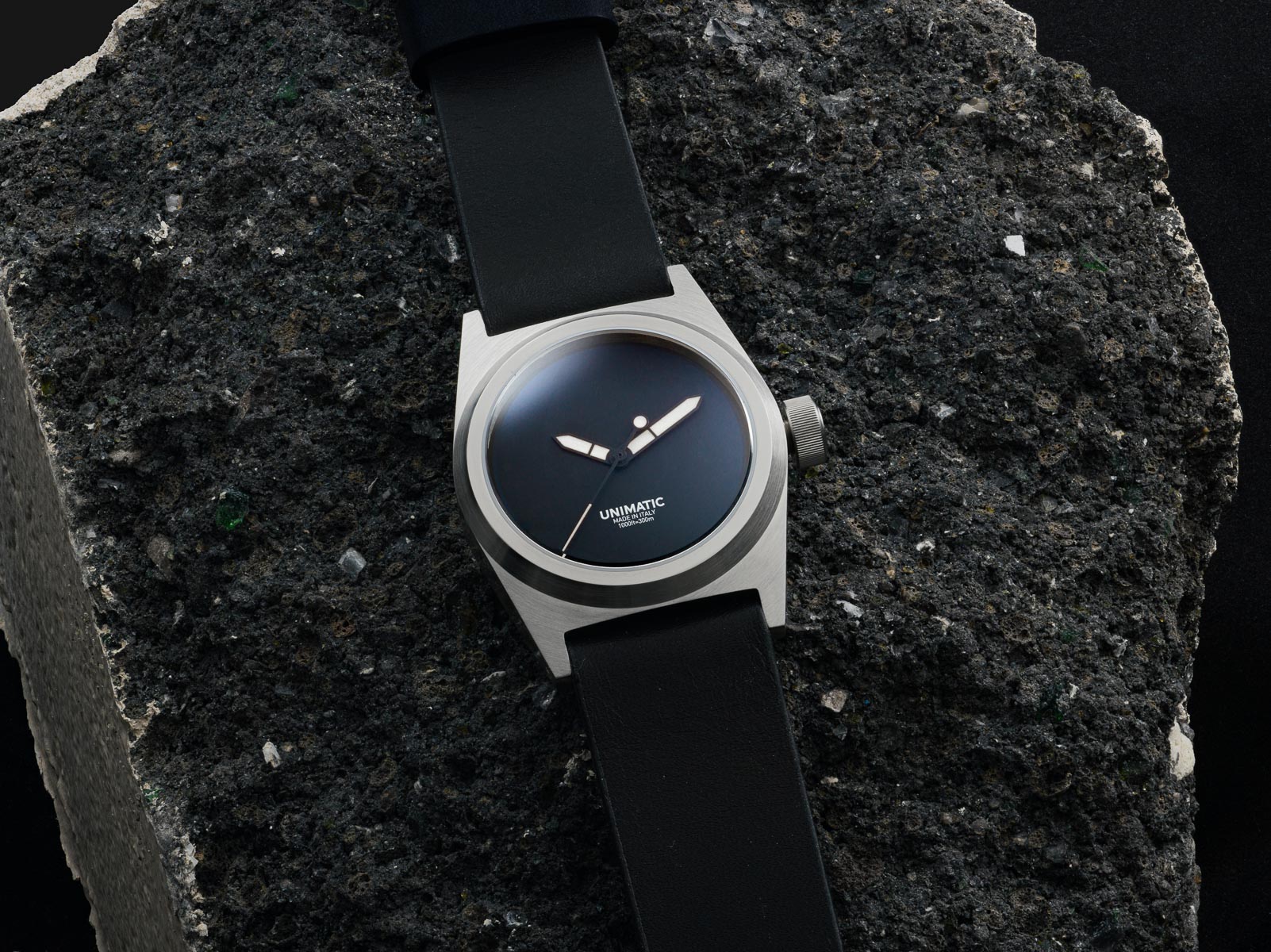 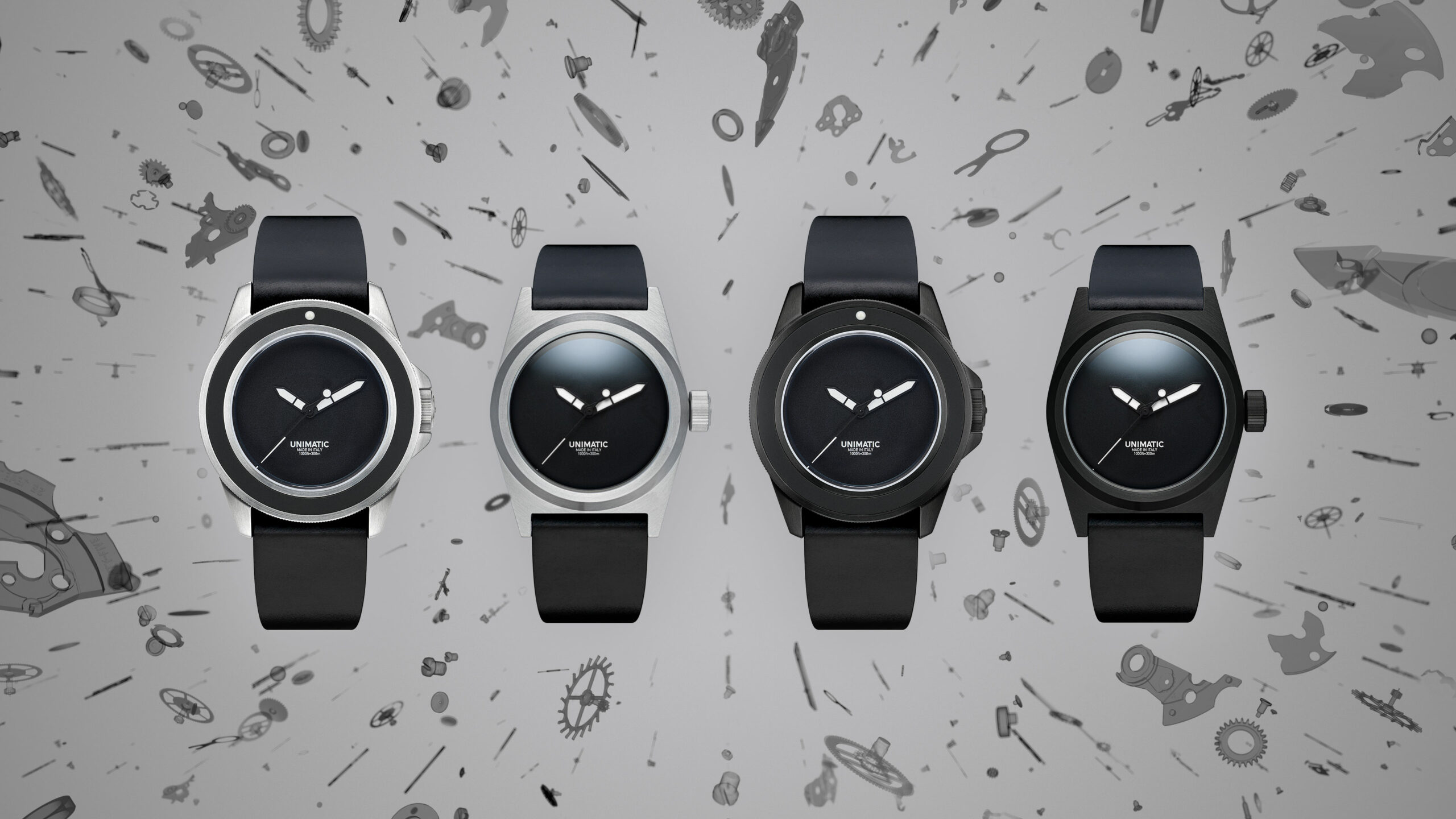 In conclusion, I must say that I am a big fan of this next step in the evolution of Unimatic’s design exploration. The curiosity in pushing design to levels that might feel uncomfortable to some is the perfect style statement to others. I am one of the latter as I like pushing boundaries to see what works within the world of classic watch design. Consequently, you have to like the minimalist design to appreciate this. Purists would have already hated the fact that the guys at Unimatic decided to remove all the markings of the dive bezel with quite a few of their previous releases. Removing the hour markers takes minimalism to another level and essentially sacrificing more of the everyday practicality of timekeeping. 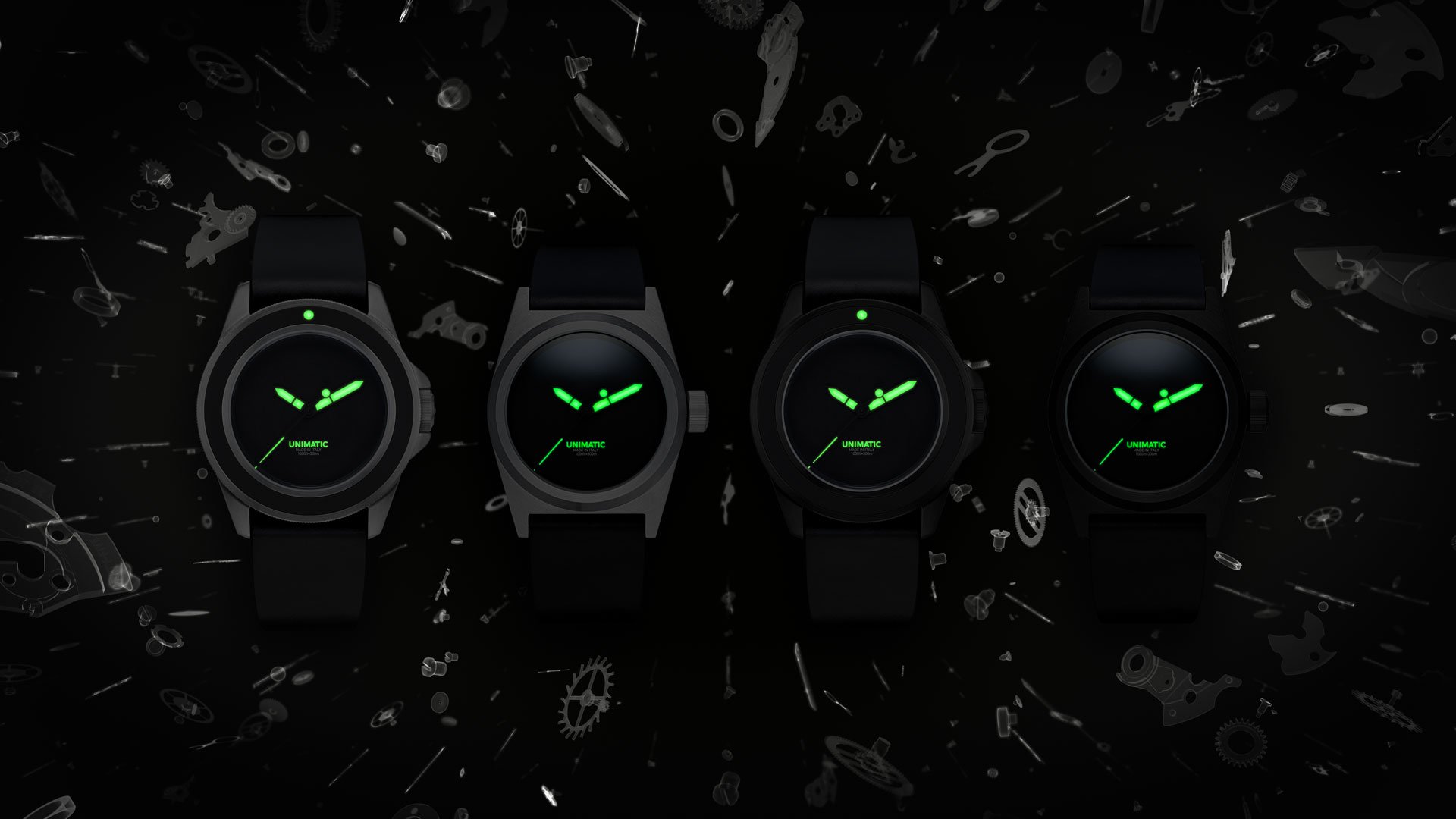 But what we end up with in return is a series of four watches that will undoubtedly appeal to people looking for a watch that is a true style statement. Whether you like that statement is very personal. I happen to be one of the people that greatly appreciate this next step for the Unimatic brand. Especially the black Modello Uno U1S-M for me is a great pick. It shows that you don’t need a lot to simply read the time while at the same time creating a great style statement. Above all, if that is what you are looking for, this Unimatic S-series could have the perfect watch for you.

For more information or to buy one of the new Unimatic S-series models, visit the official Unimatic website.