My favorite Tag Heuer silhouette receives a new facelift with the TAG Heuer Monaco Green Dial Limited Edition release. Green dials have been a bit of a “hype” colorway this year, and you know what? I’m entirely OK with that. I’m not one to jump on the bandwagon, but when a brand does the hype color as nicely as this, I can only sit back and admire the view.

This tasty green-dialed beauty is limited to just 500 pieces. It celebrates this year’s Grand Prix de Monaco Historique, of which TAG Heuer is the Official Sponsor. The TAG Heuer Monaco is also the Official Watch of the Formula One Monaco Grand Prix. This goes to show there is more than just a tenuous link between the Monaco watch and its Principality namesake. 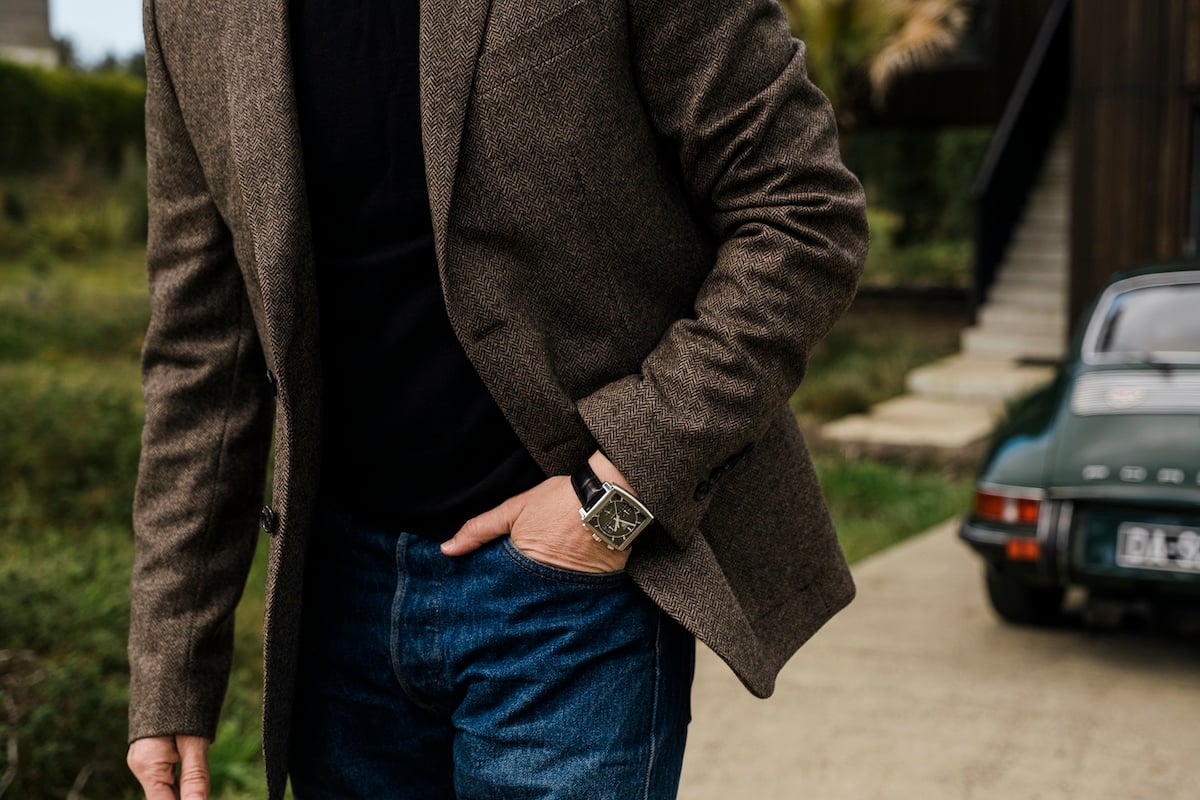 What is the Grand Prix de Monaco Historique?

Every two years, Monaco plays host to this historical showcase race. In the classic car racing community, it is supposedly something of a highlight in the calendar. Classic car racing enthusiasts are treated to a spectacle of historic Grand Prix racing around the legendary Monaco circuit. More than 200 Grand Prix cars representing 50 different carmakers and 21 countries enter the event every two years.

The event consists of 7 different races, each representing the different periods of Grand Prix racing from the 1930s to the 1970s. The cars are selected for participation because of their historical value and level of originality. I can imagine it’s quite the sight to see these vintage Grand Prix cars taking to the track once again in all their glory. I’m not a traditional Formula One fan, but I can imagine that this is something that even modern-day racing fans could appreciate. It’s difficult not to care about the origins of a sport when you care about it. 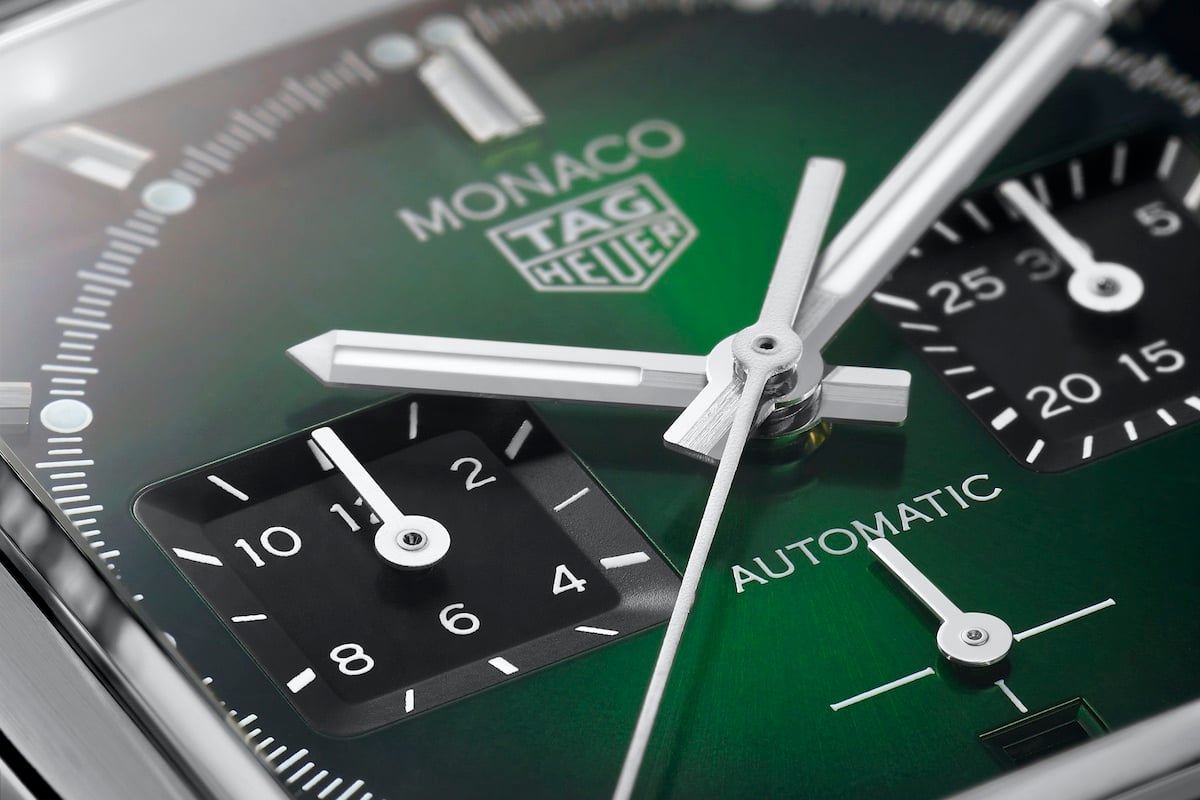 You may recall that this is not the first green-dialed Monaco from TAG Heuer. In 2019, the brand released a green-dialed model with gorgeous “Cotes de Geneve” as part of the Monaco 50th Anniversary collection. It represented the first decade of 1969-1979. This is even more of a significant honor when you remember that Heuer first released the Monaco in 1969 as the 1133B or 1133G. The letter corresponded to the dial color, blue or grey. That said, I guess it’s surprising that the 2019 anniversary edition was green rather than blue or grey? Either way, it was a stunning dial. The green subtly changed color in the light thanks to those Geneva stripes, and the yellow highlights complemented the green wonderfully. It was, by far, the best of the five anniversary editions.

Today’s green dial is a little bit different. The rich emerald green hue takes center stage, complemented by the black sub-dials. While we have established that green is not new to the Monaco lineup, this is a never-seen-before dial tint and adds a classy-yet-modern take on the Monaco. The degradé shading from light green in the center to dark green at the edge is mature and feels stylish and modern. While green is often associated as a British racing color, eagle-eyed readers may notice the connection with the famous covered portion of the Monaco Grand Prix track, preceding the chicane by the port. A white printed minute track and sundial markings and rhodium-plated indexes and hands with white Super-LumiNova offer some contrast to the dial. 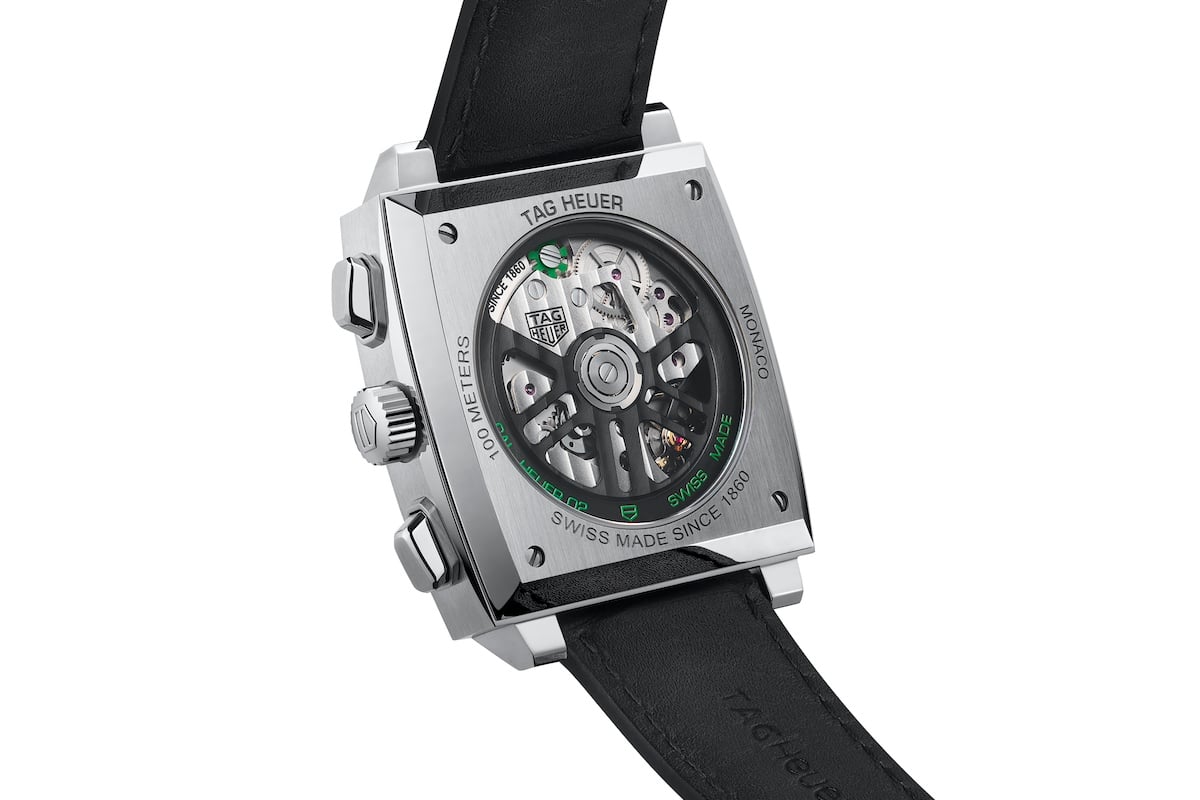 The Calibre 02 gets a green makeover

Flip the watch over, and you’re treated to a view of the in-house Calibre 02 automatic chronograph movement through the sapphire display case back. The Calibre 02 is 2018’s follow-up to the Calibre 01, launched in 2015. The movement has a tri-compax layout (with sub-dials at 3, 6, and 9), a date at 6 o’clock, and a maximum measure of 12 hours. The date window is discreet and quite well integrated into the sub-dial at 6. The Calibre 02 boasts a lengthy 80-hour power reserve to boot.

In keeping with the dial livery, the movement rotor is also DLC plated in green, as is the chronograph column wheel. A nice touch and continuation of the green theme from the dial. It’s subtle touches like this that make a world of difference in my eyes. It creates a more cohesive design. 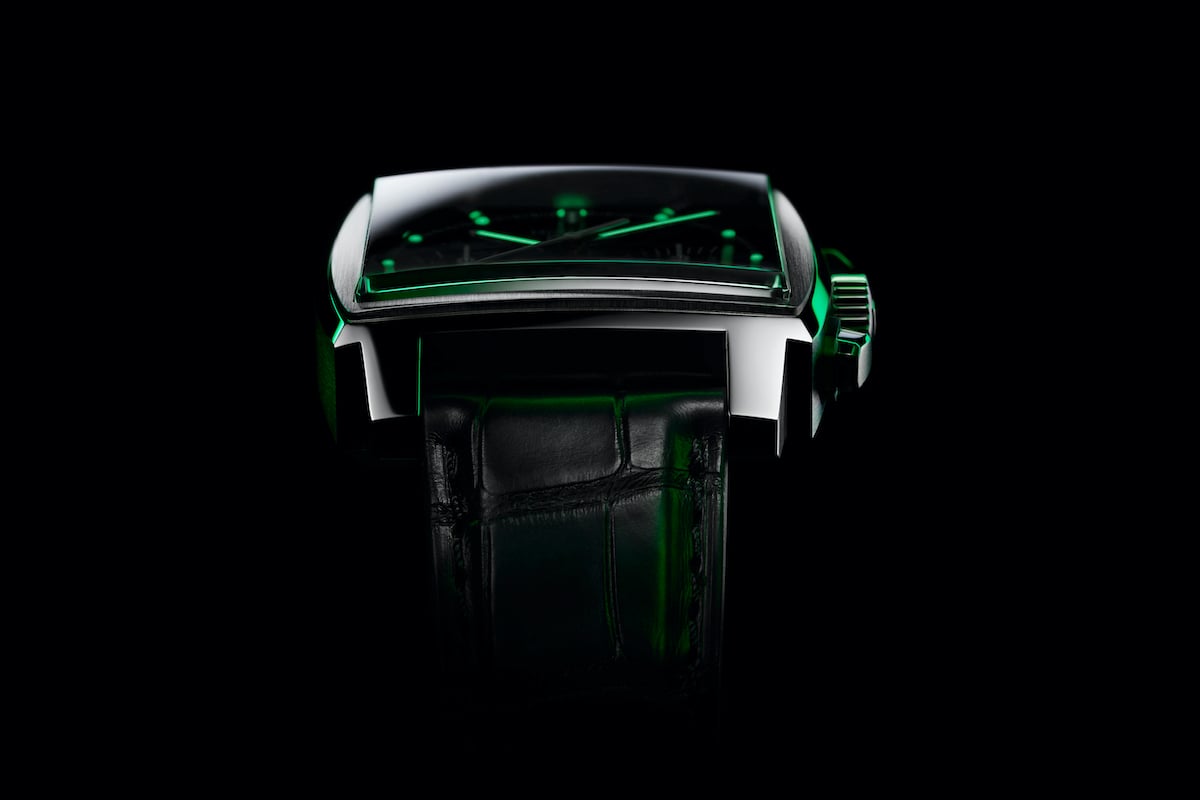 At a glance, the Monaco case hasn’t changed much throughout its history. The iconic square case has always remained somewhat constant. That said, the modern Monaco case is subtly “more square” than the original Monaco. It has oblong pushers rather than cylindrical ones. Apart from those changes, the overall shape remains faithful to the original, with its sharp, defined edges and raised crystal. The 39mm case has a combination of polished and brushed surfaces, with well-finished pushers and crown.

On that note, you may notice that the crown and chronograph pushers are arranged in a straight line. The integrated nature of the Calibre 02 chronograph movement makes this possible. The previously used Calibres 11 and 12 were module-based, resulting in the pushers sitting higher than the crown. 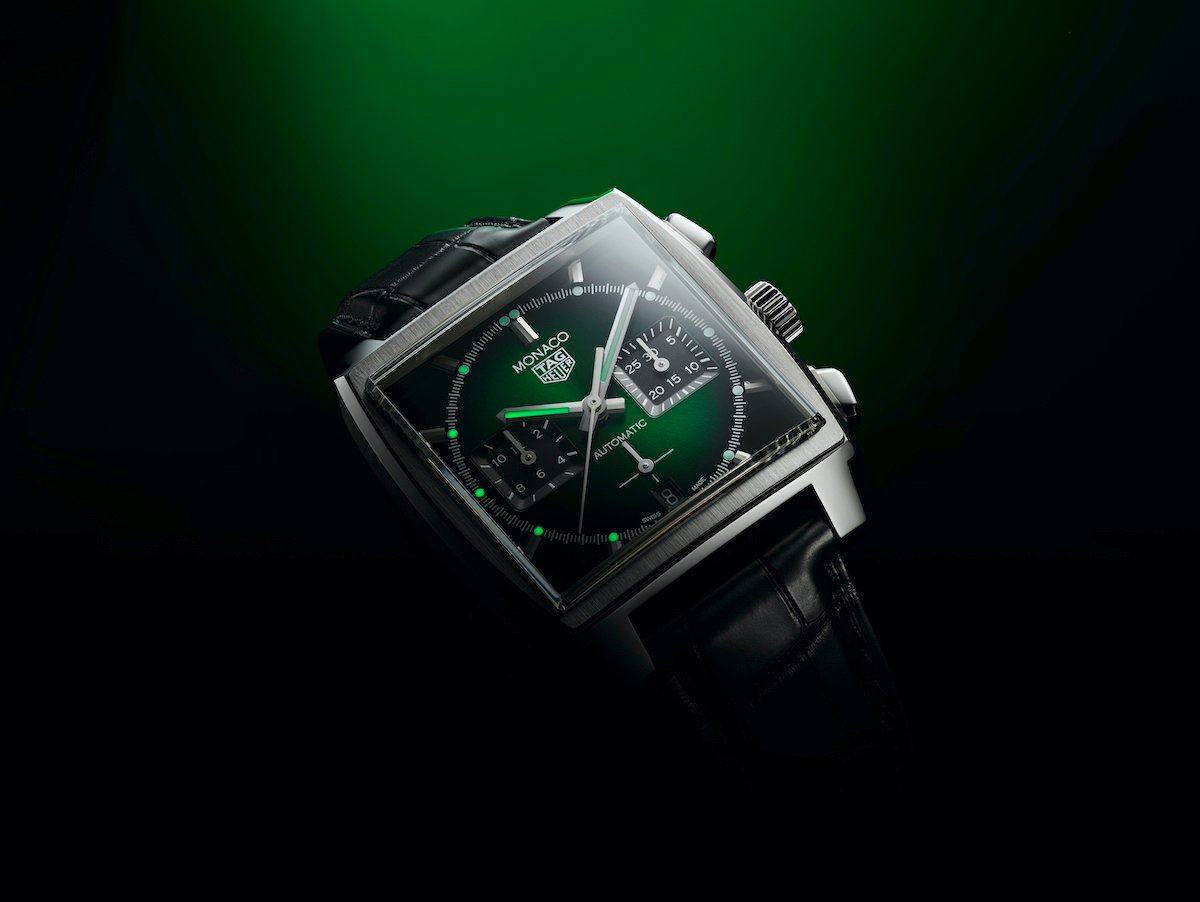 I’ve always had a soft spot for the Monaco. It’s different from the usual round profile cases, and it does unorthodox with real confidence. My brother is not a huge watch fan, but he was immediately taken by the Monaco when we saw it in a jeweler in London a few years ago. I think that if a watch can stop a non-watch enthusiast in their tracks and make them say “wow!” then it has something special. Of course, we knew the Monaco was unique anyway. This green-dialed beauty we have here today does nothing but strengthen that position in my eyes. Whether or not you appreciate the tie-in to and celebration of the Grand Prix de Monaco Historique, it’s hard to deny that TAG Heuer got it right with this one. Find out more on TAG Heuer’s website. Price = €6,300 including 19% VAT in Germany.