Founded nine years ago, Nezumi studios is a design Maison based in Stockholm, Sweden. The brand’s first model, the Voiture, came to life through Kickstarter. Since then, the brand has released a series of handsome meca-quartz chronographs at reasonable prices. Today, we check out one of the catalog’s mainstays, the Nezumi Corbeau.

We all have our secrets. I’m not talking about the big stuff. I’m not talking about gambling on the sly or the quart of whiskey you keep in your pencil case. And I’m certainly not talking about what you get up to after dark while your neighbors assume you’re tucked up in bed like any other self-respecting citizen. No, I’m talking about those little corners of the industry you discovered all by yourself. The rough diamonds you uncovered alone. Those brands that you cotton on to before anyone else seems to have realized how awesome they are. Of course, part of you wants the world to know. But there’s a caveat to that. You want the world to know, providing the world appreciates that you knew first…

Well, they probably think we’re all crazy. And that’s cool.

One of the best things about being in the worldwide watch community is being able to share your passion with likeminded people. This is a mutual pursuit. The people on the outside of the industry? Well, they probably think we’re all crazy. And that’s cool. But it’s mostly cool because we’re crazy together. And so while you may want “credit” for unearthing a hidden gem, the most important thing to any true watch fan is that everybody knows about it. Only then can you get on with the enjoyable business of sharing. 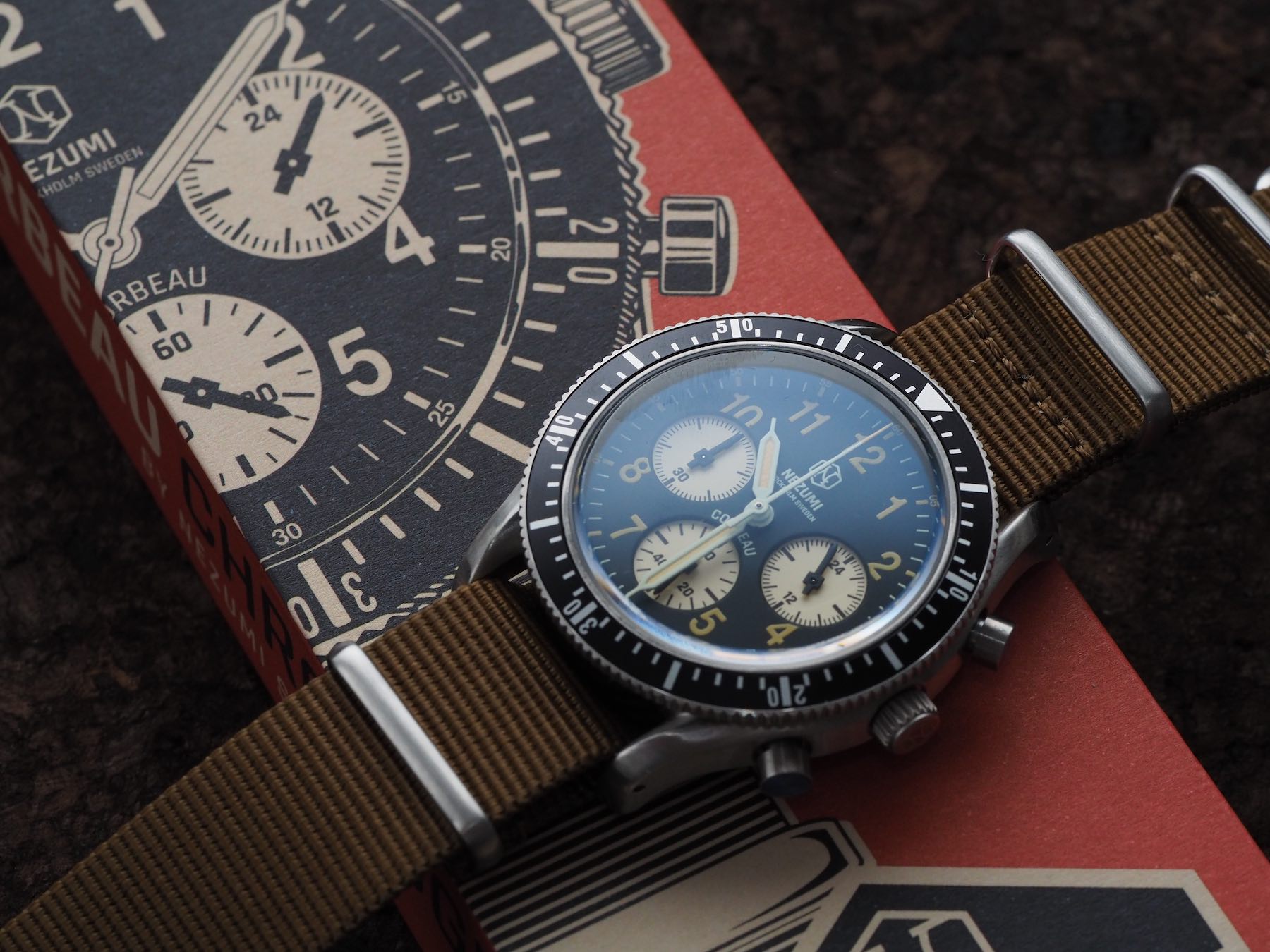 After that circuitous, heartfelt ramble, allow me to introduce the Nezumi Corbeau. You might well have heard of the brand. You may even have one or more of its watches. I came across this outfit during its initial Kickstarter run. I bought that Nezumi Voiture (I bought two, actually) and have loved it ever since. I subsequently bought the same watch again when it came out with a gold bezel and pushers. I don’t know why. The design just speaks to me.

But the one thing the Voiture always said to me louder than anything else was, “I wish I was mechanical. Please, Rob, don’t buy another Nezumi until there is a mechanical option available.” Truth be told, I like meca-quartz. It never, ever bothered me that my stable of Voitures were all powered by such movements. The Corbeau uses the Seiko VK63, and is a brilliant example of how to get the most out of the humble caliber. It’s super reliable and does what it says on the tin. But the real reason I wished there was a mechanical option was so the brand could receive plaudits from a wider section of the community.

The design is top drawer. The build quality is about as good as you can hope for at this price point. But the movement? As “fine” as it is, some collectors won’t give a brand the time of day unless it offers mechanical products. I don’t agree with it (I think beauty can be found in all styles of wristwatches), but I do totally get it. 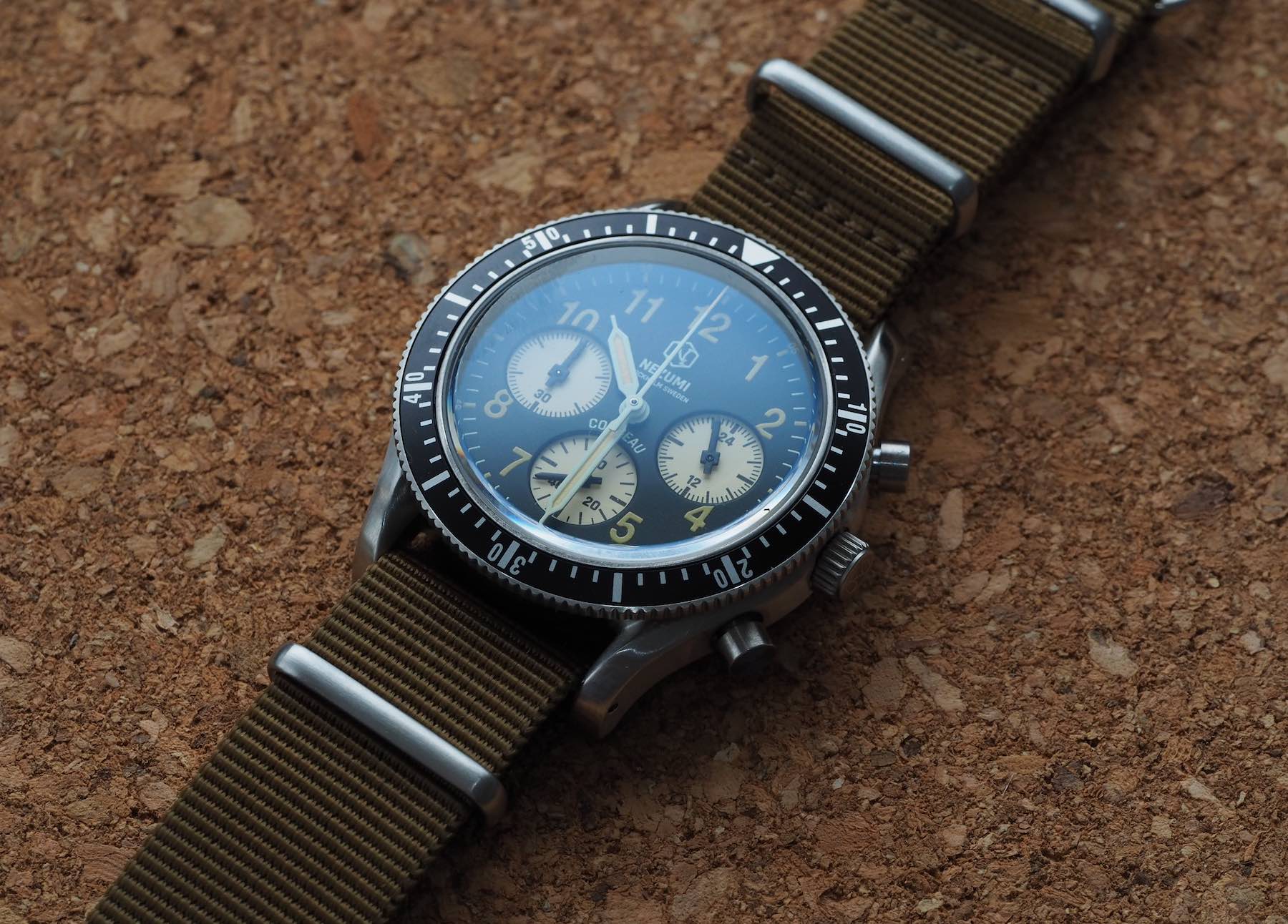 I am a weak man

Needless to say, I caved. I picked up the Corbeau last week. What can I say? I am a weak man. The Corbeau had been intriguing me for a while. Honestly, I didn’t love it before I got my hands on it. I was just drawn to it. Curious, I finally decided to give it some time on the wrist. I have not been disappointed.

What I like most about all of Nezumi’s watches is the size. These meca-quartz chronographs are just 40mm in diameter. Anyone that knows anything about watch diameters knows that, depending on the dial and bezel configuration, 40mm can appear petite or positively gigantic. For example, a 38mm NOMOS Glashütte Orion looks enormous in comparison to this 40mm Nezumi. And yet it is literally smaller. It can be a bit mind-boggling if you try and get your head around it from figures alone, so I encourage you to get any watch you’re interested in on the wrist as soon as possible.

The Nezumi Corbeau, like the Voiture (which I will get round to reviewing soon) before it, wears even smaller than the black and white would suggest. That has something to do with its stubby, bombé lugs (a lovely touch), and an understandable height/width ratio that means the watch stands up somewhat on the wrist. It is 11.75mm thick excluding the crystal. Slim enough to pass unnoticed, but stout enough to give the watch presence when observed. 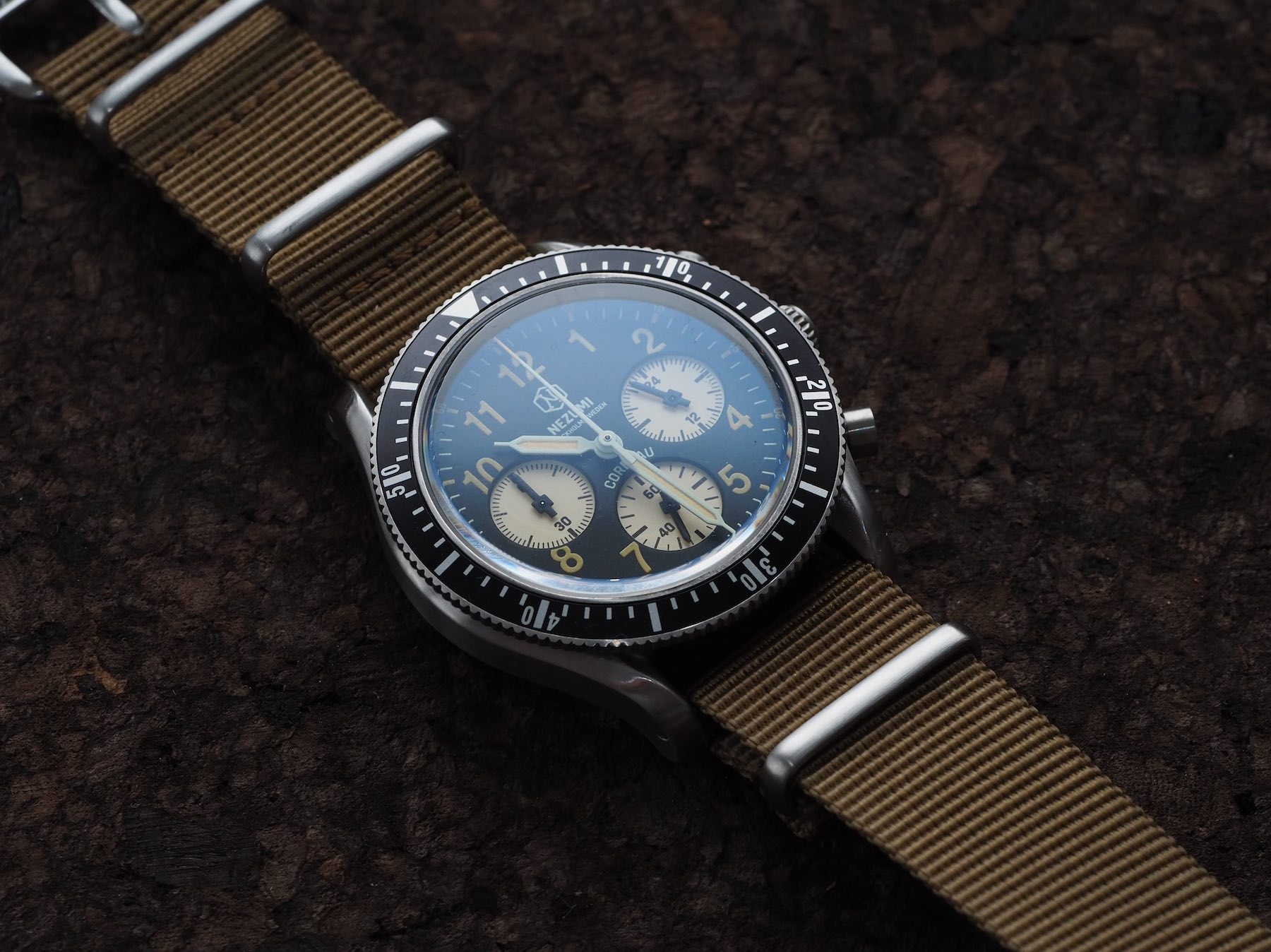 Luckily, the diminutive diameter means it wears neatly regardless, with the laser-cut nylon NATO holding it snugly in place. In the past, I’ve flipped my Nezumi watches onto different straps. It isn’t a comment on the quality of the leather straps (although they have improved markedly since the first launch), but rather a statement of personal taste. The Corbeau is delivered on a longish NATO with a no-nonsense engraving on the buckle. I appreciate brands feeling the need to mark everything in the package with their name, but, honestly, when it comes to shallow laser engravings on NATO or ZULU buckles, I’m fine without it.

…a more interesting color than many standard webbing straps…

The strap is tough and comfortable, and a more interesting color than many standard webbing straps supplied with smaller independents. It is brown, yes, but there is a rustier tone to it than the more-often seen chestnut shade. This brings me on to the thing I perhaps like more than any other when it comes to this particular Nezumi Corbeau reference (Ref. CQ2.202) — the deft use of color. 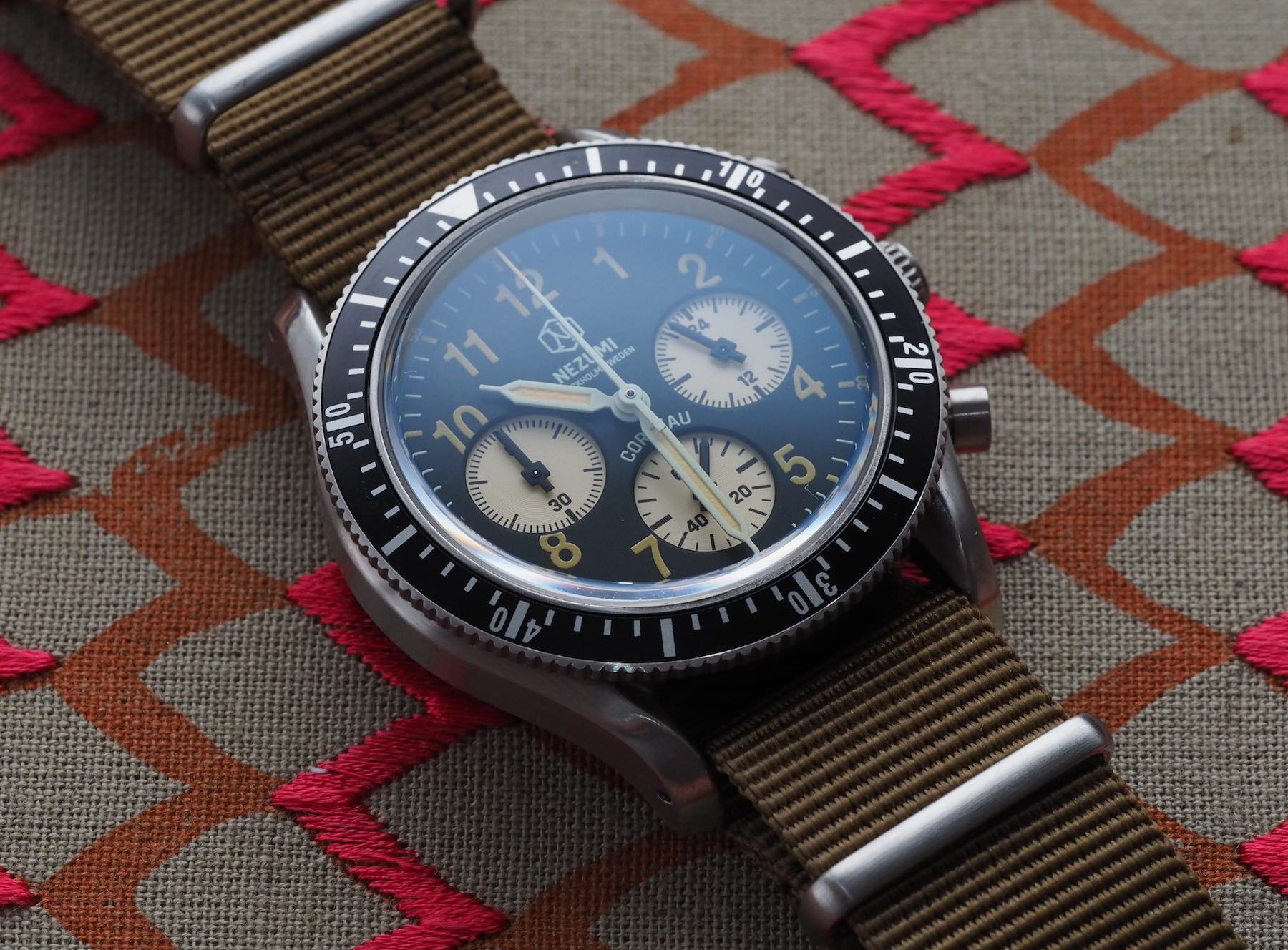 Color has always been right at the top of the plus point list when it comes to Nezumi watches. The creamy dial of the original Voiture is still my favorite. When paired with the “soft black” sectors it became a vintage vision. The Corbeau is no different. The brand seems to have little interest in the color white. I’m totally on board with that. The off-white tones blend beautifully with the mustard-colored Arabic numerals and the slightly brighter pumpkin lume on the hands. One very subtle touch I loved was the pumpkin tip on the chronograph seconds hand. It is very easy to miss it upon first glance, but once you’ve spotted it, it becomes hard to ignore.

The heavily recessed sub-dials in that warm off-white are clean and legible. The Corbeau printing above the 6 o’clock sub-dial is crisp and unobtrusive. The overall military character of this watch is enhanced by its legibility. A uni-directional rotating bezel with an anodized aluminum insert surrounds a stepped anti-reflective sapphire crystal, adding extra functionality. 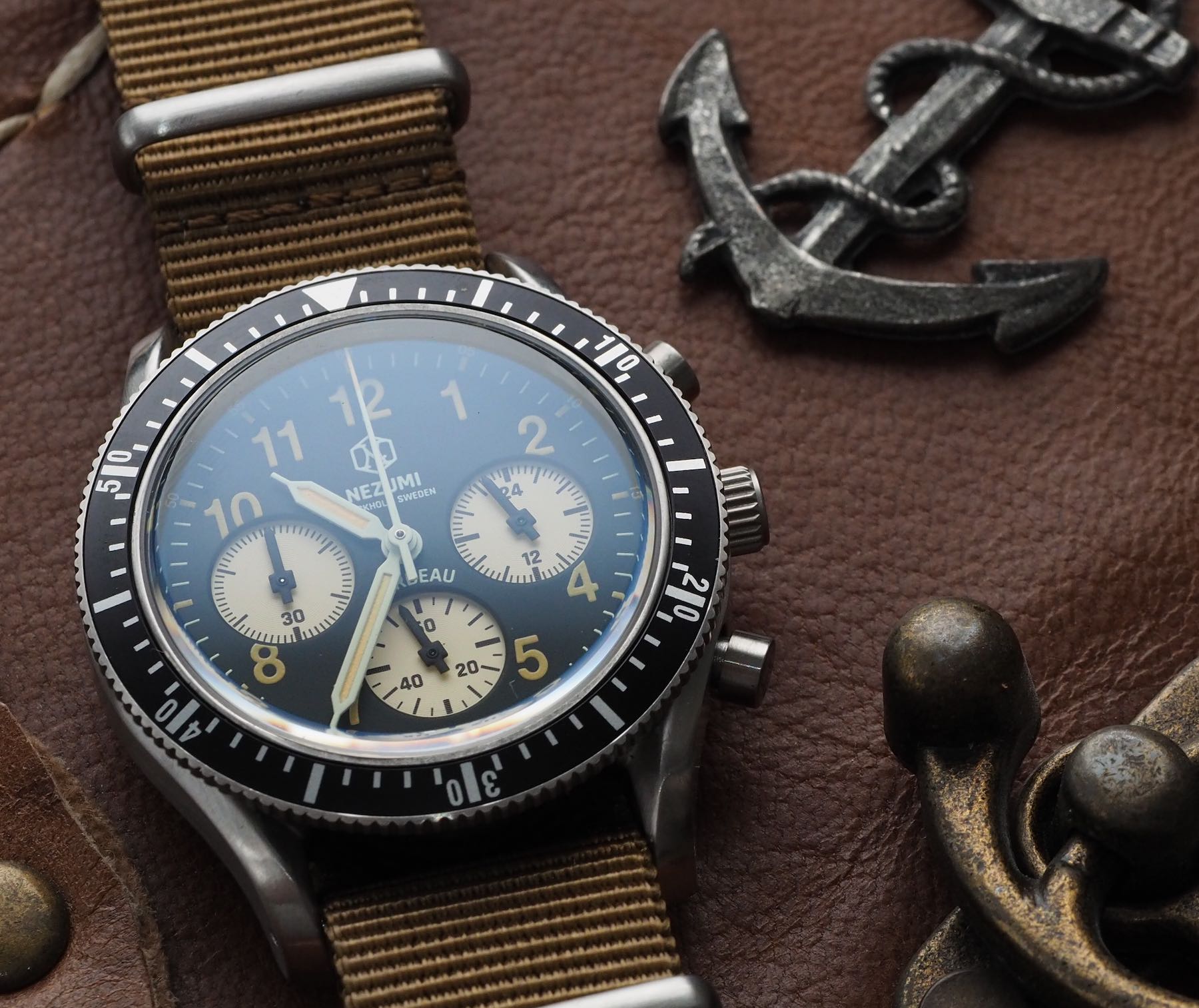 Unsurprisingly, I have a lot of watches in my rotation. I can say this about this Nezumi product: It is a fun one, for sure. I have zero qualms about wearing these watches during activity. Partly because they do not find themselves catching on protrusive surfaces due to their smaller dimensions. Partly because they are lightweight (thanks to the quartz module within). And, quite candidly, partly because of the price. I cycle to my office every day. As a bonafide Fratello team member, I mostly wear a Speedmaster. But I travel with the Speedy in my bag, choosing instead to strap on one of my lightweight, affordable Nezumi chronographs for the ride.

I don’t like being without a watch during waking hours.

You might think it sounds a harsh assessment that I’d be “fine” with trashing my watch if I came off my bike, but I’m just being realistic. I don’t like being without a watch during waking hours. I also enjoy timing my ride on the easy-to-use chronograph. Would I be happy about damaging a Nezumi in a crash? Heck, no. But it is true I’d be less devastated than if I decked a Speedmaster that retails for several thousand euros.

And it helps that I have several Nezumis should the worst happen. Better still, it might give me an excuse to buy another one… As a serial watch buyer, it is necessary for each watch you wish to wear to have a role to play in your collection. I’ve found one for my Nezumi Corbeau and I’m grateful for it. Learn more about the Corbeau and the other watches in the Nezumi range here.