The NOMOS Glashütte brand has changed drastically over the past decade. With a huge investment made to bring manufacturing of almost all components in-house, the small, Saxon independent has carved a very special place for itself in the German watchmaking canon. And now, with the release of three special Ludwig models, NOMOS Glashütte pays homage to the story that led to its foundation 30 years ago…

When NOMOS Glashütte was established following the fall of the Berlin Wall, it was part of a movement designed to stimulate the renaissance of Saxon watchmaking. It succeeded. Now, three decades after the brand’s birth, Glashütte is booming. Other brands such as A. Lange & Söhne, Glashütte Original, Union Glashütte, Moritz Grossmann, Mühle Nautische Glashütte, Tutima, and more have combined to make the sleepy town the capital of German horology. 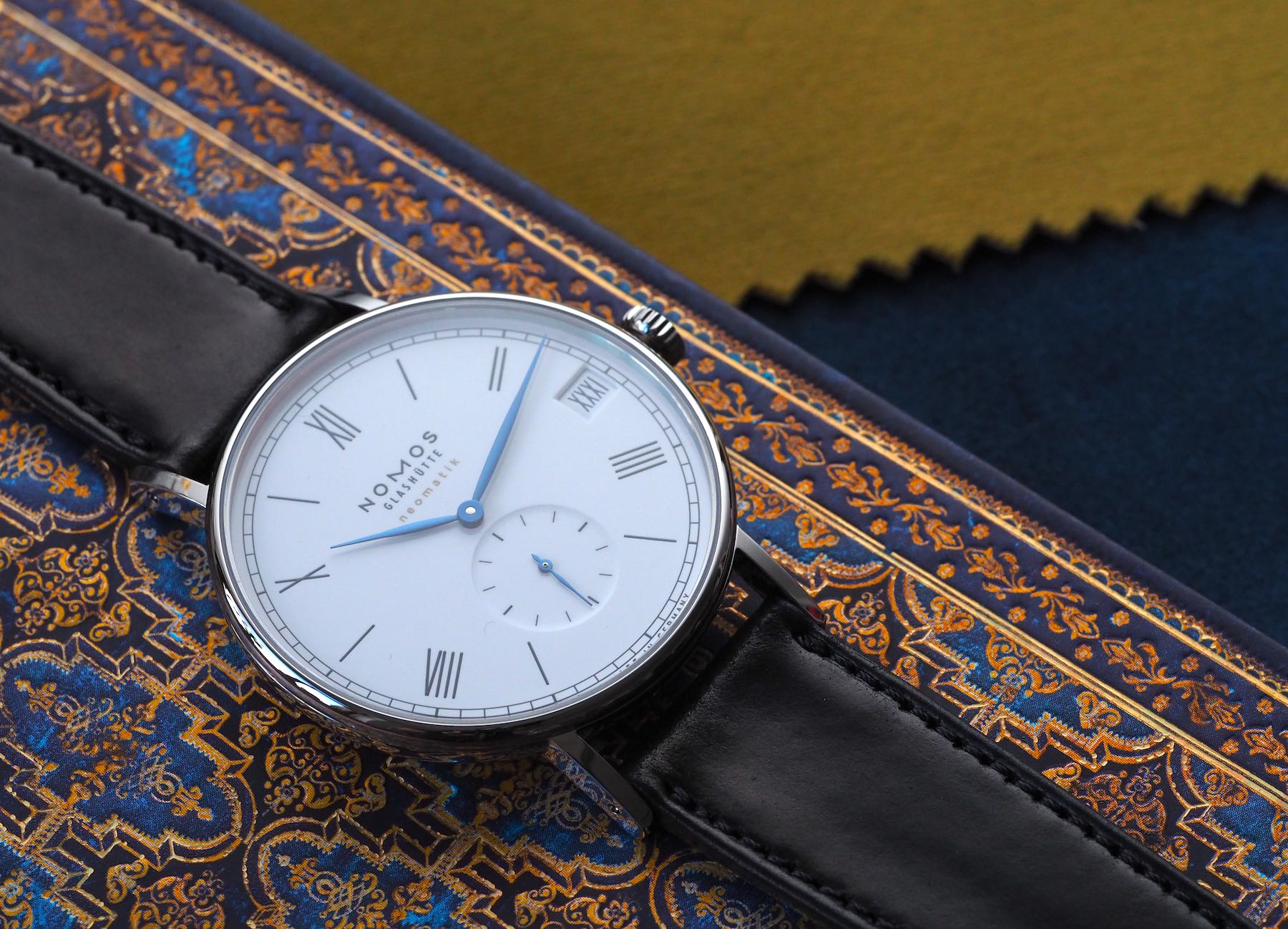 For watch nerds like me, NOMOS Glashütte holds a special charm. During its formative years (and right up until about 2015), NOMOS was a design-led brand that sought to provide clients with a finely crafted luxury watch at a reasonable price. Almost all of the components were bought in. The watches were, nonetheless, widely regarded as an absolute steal in comparison to a Swiss counterpart. That started to changed when NOMOS made the push towards independence from its suppliers and in-house manufacturing with the release of its first in-house movement in 2005. 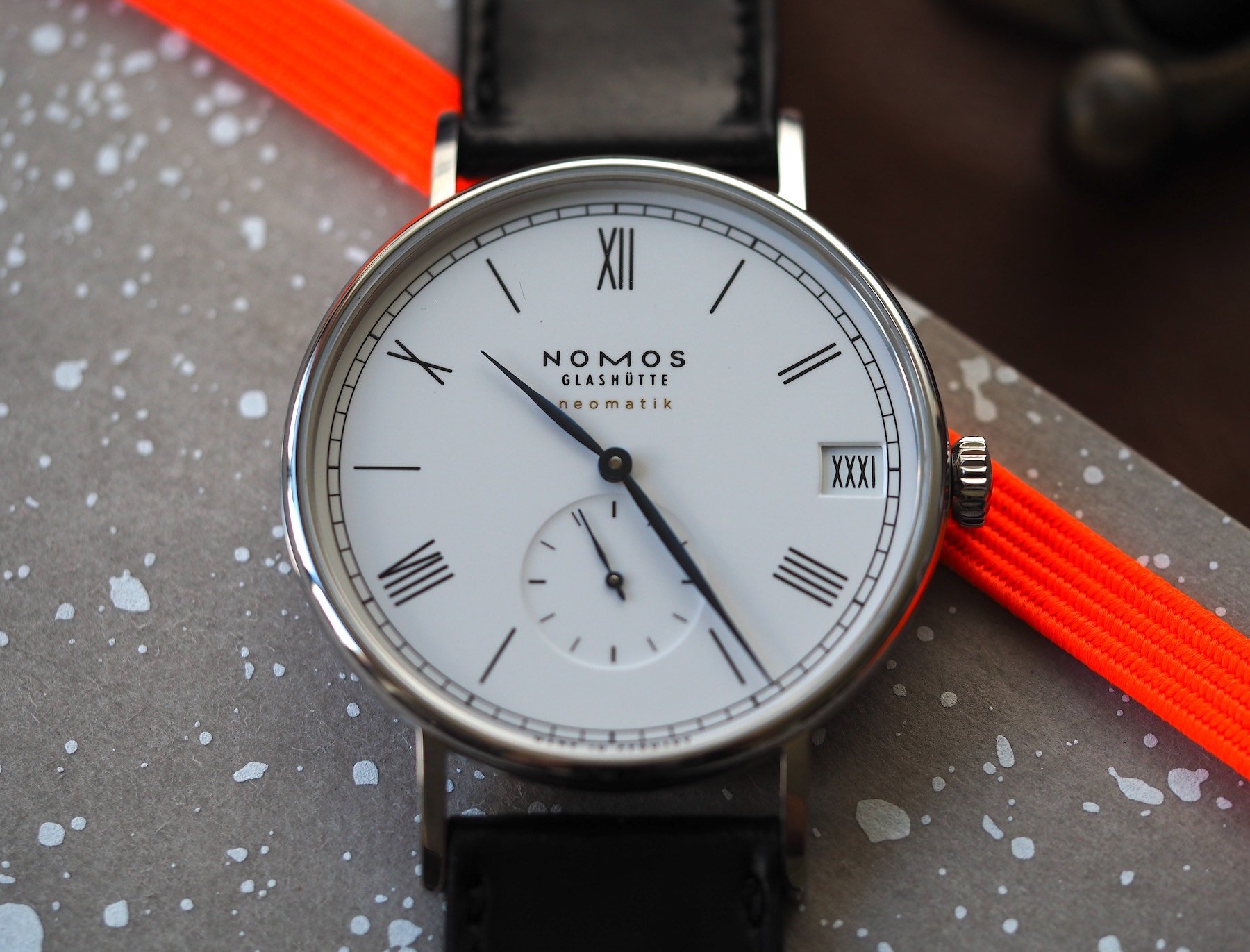 This pleasant balance remained for the best part of a decade. Prices had crept up but they were still affordable. Furthermore, the increasing presence of affordable in-house movements in the collection was a boon to the brand’s reputation. Whether the die-hard NOMOS fan from the ’90s cared about that, however, was less clear.

In 2015, NOMOS Glashütte released the DUW 3001 neomatik movement. The ultra-slim (3.2mm) automatic movement was conceived as the core caliber for an independent future. It was smartly designed so that its central architecture could be built around to add complications as and when it was necessary. 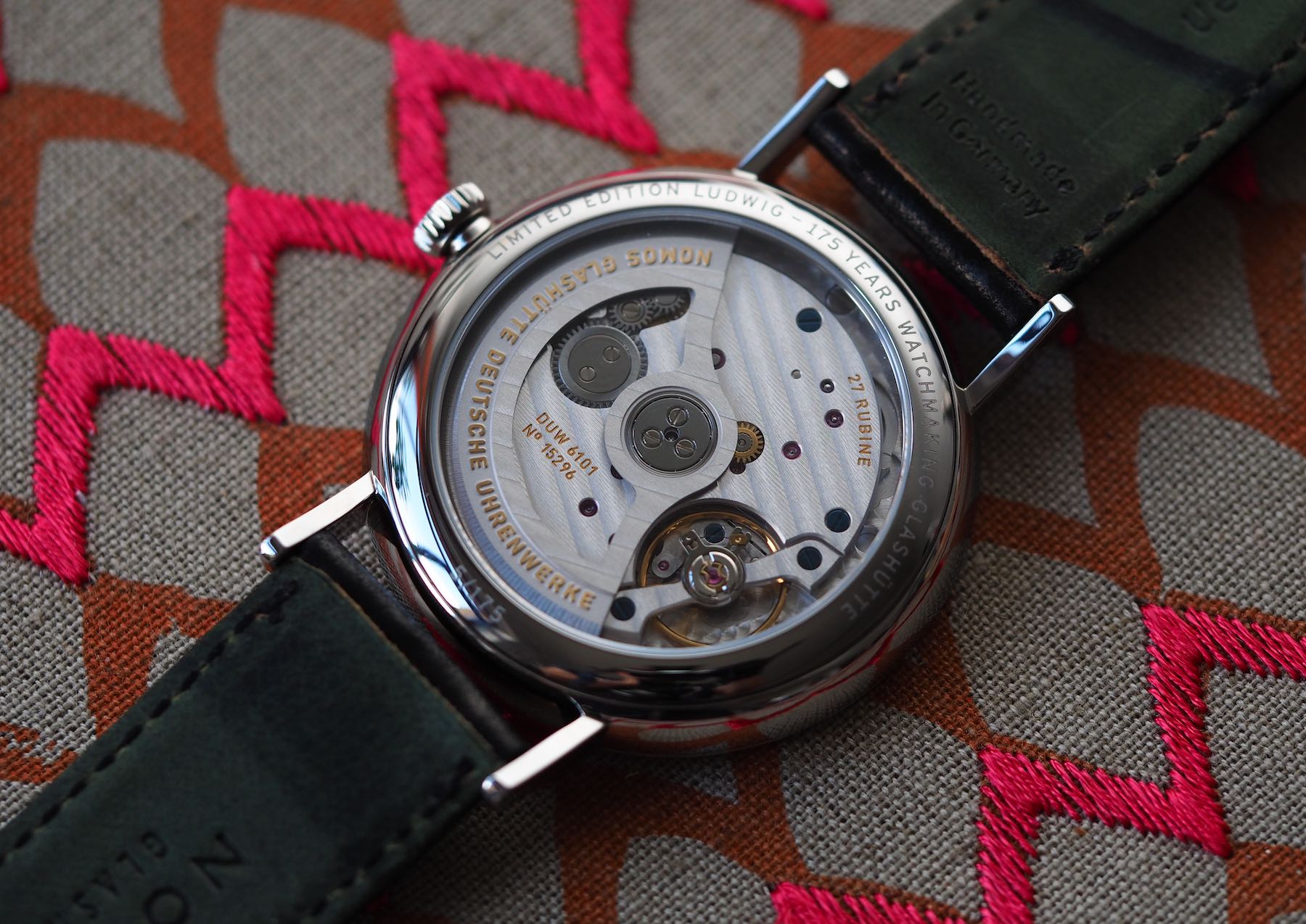 In 2018, an enormous, satellitic date complication was added to the neomatik family. The DUW 6101 movement was an instant success, offering NOMOS a larger movement to fill more “modern” sized watches that the market (seemed to be) calling for. And here we are.

2020 sees the 175th anniversary of watchmaking in Glashütte. To celebrate, NOMOS has produced three very special versions of its most classically styled model, the Ludwig. Here we have the largest of the bunch, which is powered by the DUW 6101. Say hello to the 41mm NOMOS Glashütte Ludwig Neomatik 41 Date. 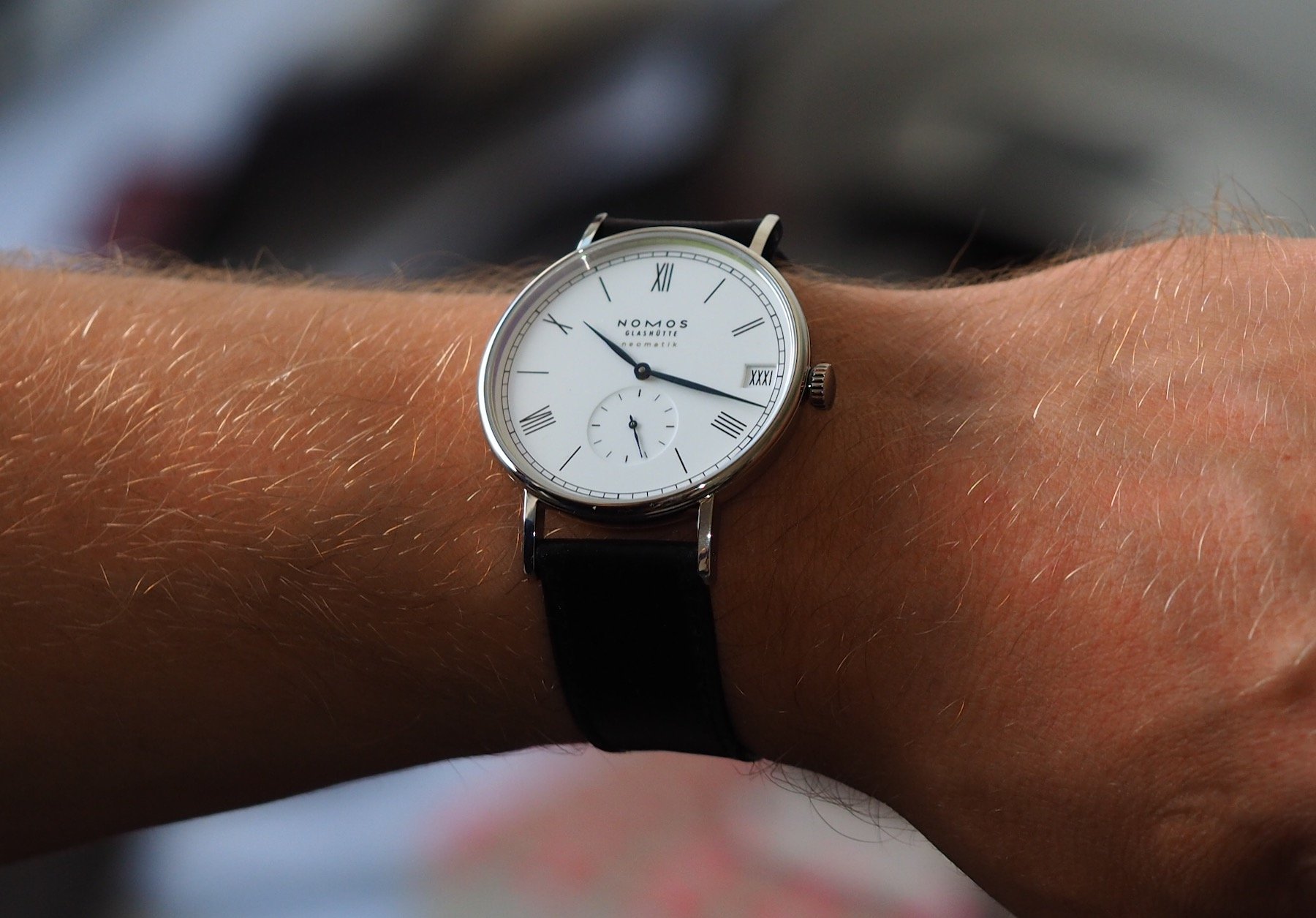 No longer a shrinking violet

The Ludwig family has been in the NOMOS catalog since 1992. Historically speaking, it lags behind the ever-present Tangente and deliciously curvaceous Orion families when it comes to popularity. The fourth original family — the Tetra — has always benefited from the low expectations one should naturally attach to square watches. As such, it seems a lot more popular than the Ludwig simply because it is awesome “for a square watch”.

Meanwhile, the affably anachronistic Ludwig is the Marmite sibling. If you love Roman numerals, the Ludwig is the only NOMOS for you. If you don’t? Well, grab the catalog and browse through all the other families the brand has created especially for you… 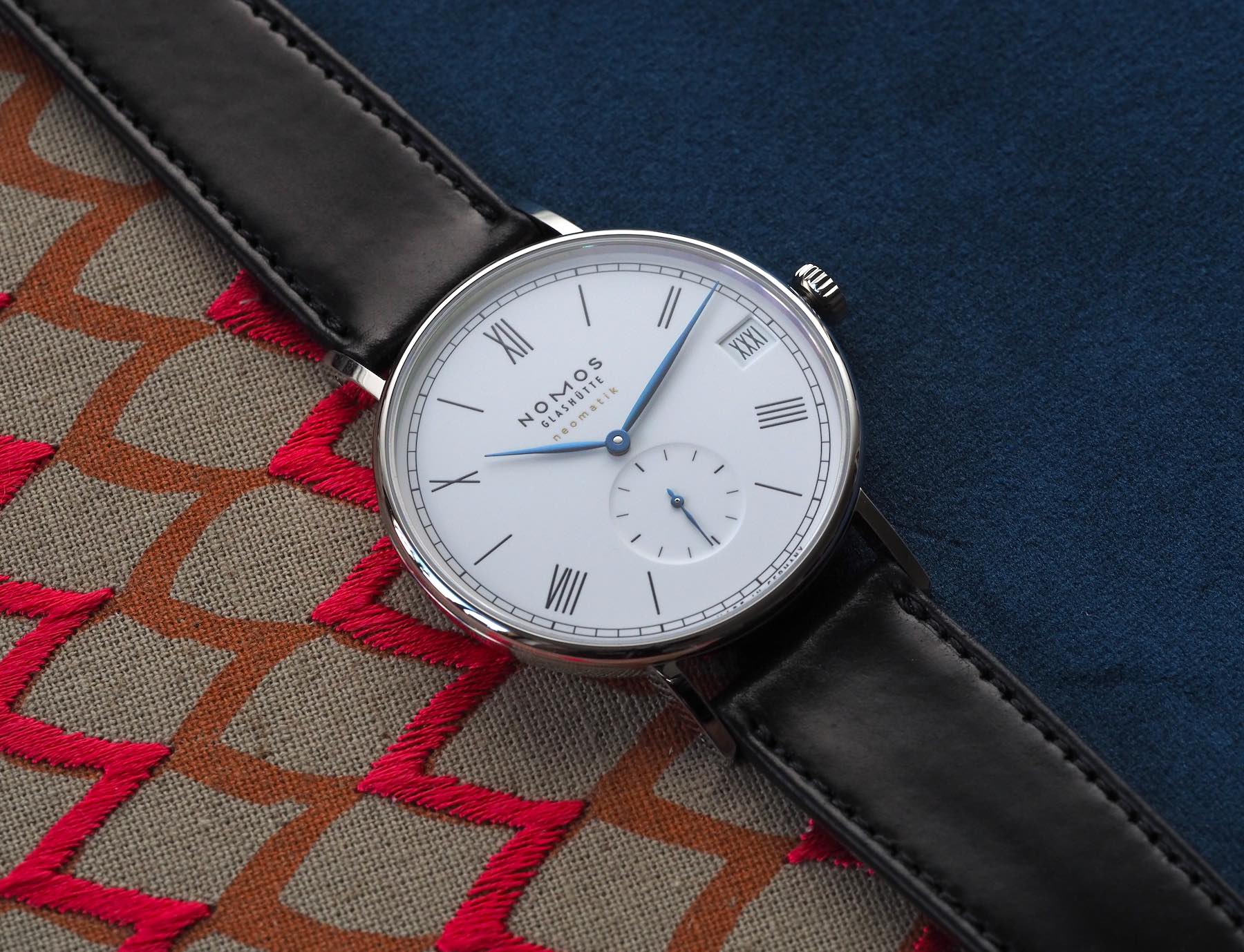 The stuffier reputation of the Ludwig is, however, no more. This new trio of models aims to simultaneously embrace and reject the past. The most obvious update to the design can be seen in the leaf-shaped hands. These replace the thin pencil hands of old. I personally preferred the thinner hands (and have secretly had a crush on the Ludwig 33mm for years) but the wider, more dominant presence of the leaf-shaped indicators certainly gives the dial a bit more “oomph”. More to the point, however, is the case diameter. The 41mm version (actually 40.5mm wide but only 7.7mm thick) is so massive on the wrist it is fair the say the Ludwig is no longer a shrinking violet. 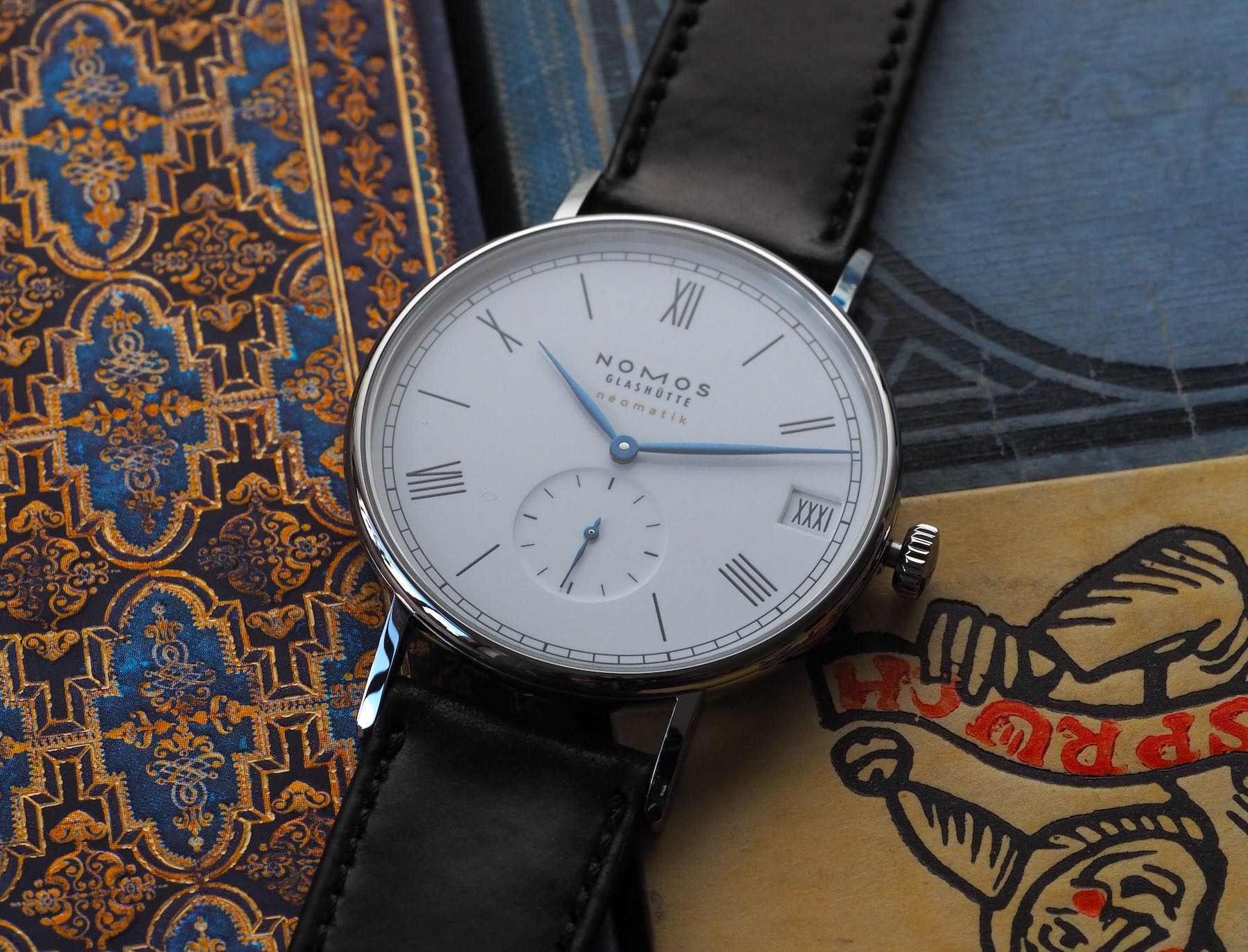 A few weeks back I debuted my Visual Impact Index. The whole exercise was partially inspired by my NOMOS Glashütte Orion 38 De Stijl limited, which I have forever been convinced looks a good few millimeters bigger than its measurement on paper. All NOMOS watches are like this. Wide, flat faces. Edge-to-edge sapphires. Slimline movements. We expect a NOMOS to start grabbing your attention from 35mm and up. How many other brands can you say that of? Not many I’ve seen, that’s for sure.

And so, as you probably guessed I would, I stuck the measurements of the NOMOS Glashütte Ludwig Neomatik 41 Date into my VII to see what it really looks like off the wrist. Unsurprisingly, it came in at a massive 45.78mm. And that’s no joke. It really does throttle your attention. 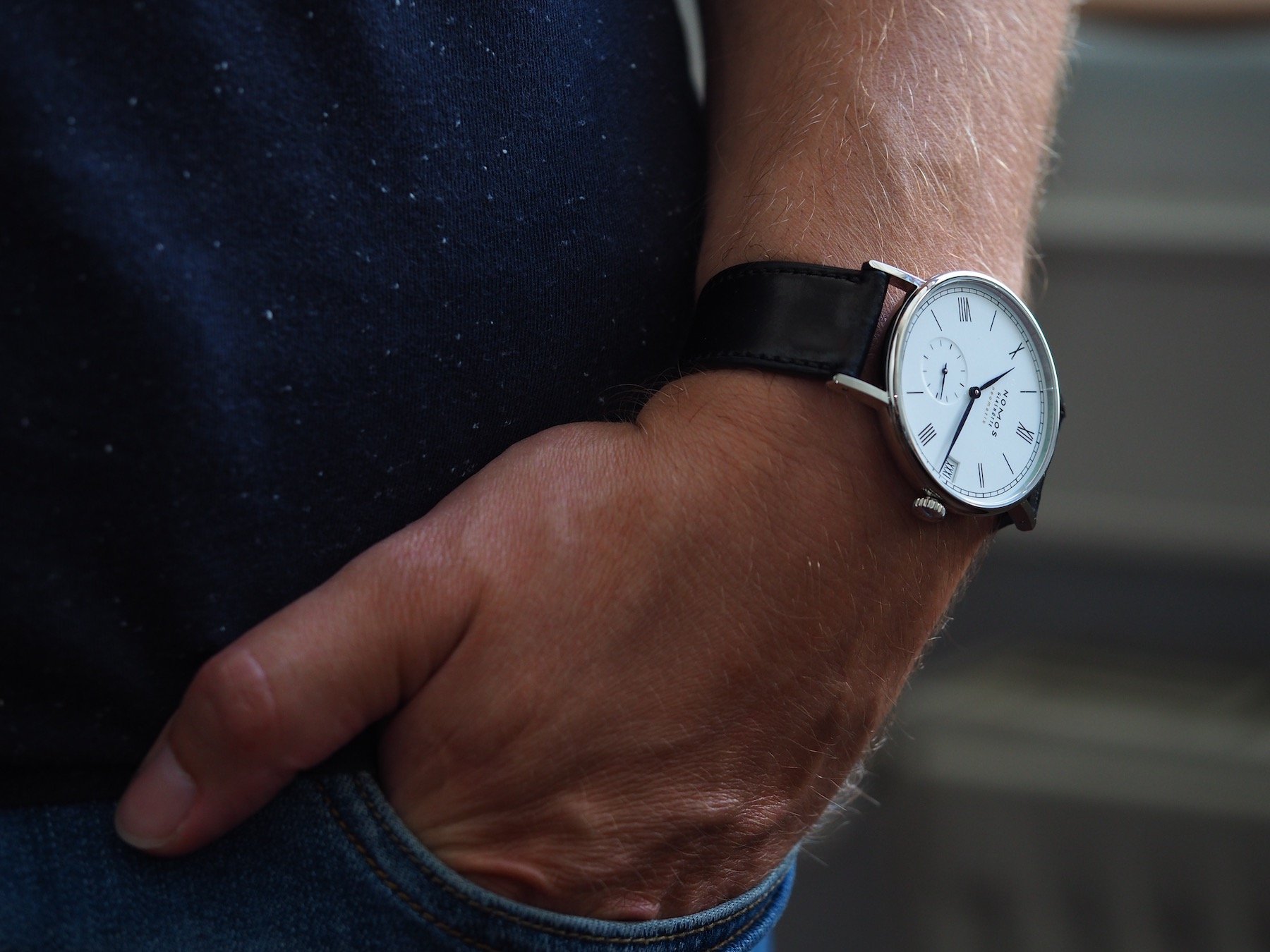 I got my friend to strap it on his small-to-average (17cm) wrist so I could shoot a few shots of it being worn. It is, as you can see, a bit of a wrist monster. The thin and politely sized lugs do make this watch far more wearable than it would have been had it been fitted with bulkier, more arresting lugs like the Zürich model, for example, but even so, the new Ludwig leaps out from the wrist like a bright light in the dark. That enormous expanse of dial (with an enamel finish as opposed to NOMOS’s traditional silvered style) is not for everyone. However, modern trends suggest it is a dial for the many, not for the few. 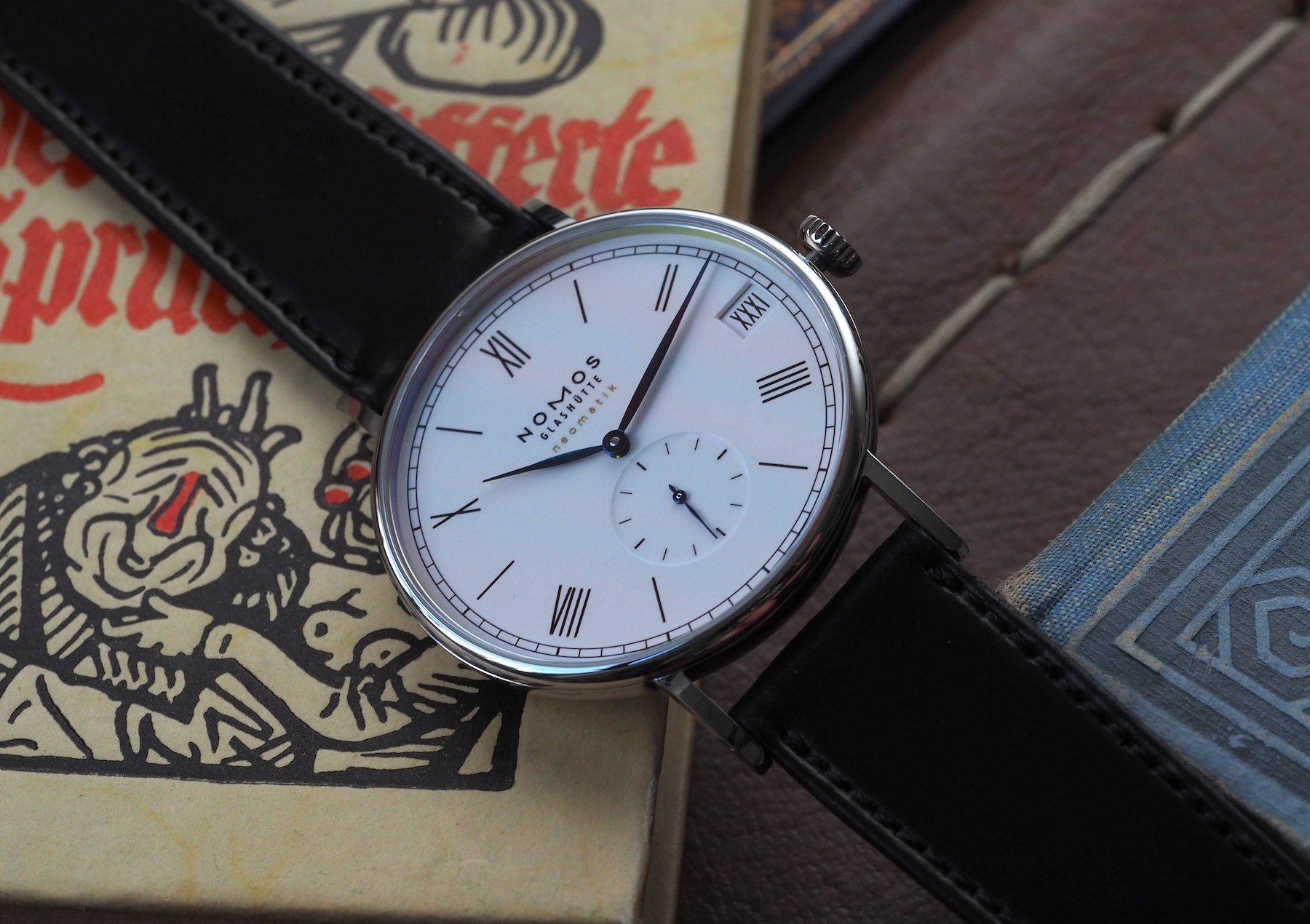 During my time working for NOMOS, I found myself gravitating more and more towards the smaller pieces. I think that is the area in which the brand truly excels. That said, I used to receive comments (daily) that customers were put off by the brand because the diameters were “too small”. Now, I am personally convinced that the majority of people complaining about the size of NOMOS watches had never even bothered to try one of their wrist (the long lugs of the Orion and the surprisingly high VII results of all families suggest there was probably something for everyone in the collection even if it hasn’t been immediately obvious from the catalog itself), but in some cases, it is simply true.

Some customers have enormous wrists. 35mm Bauhaus-inspired watches are easily lost on larger wearers. And so it was necessary for NOMOS to fill that gap in the market. With several 40mm+ options now available (and all of them appearing at least 3mm bigger than that in reality) there is now plenty to choose from. With the release of the NOMOS Glashütte Ludwig Neomatik 41 Date, there is now an intensely classical timepiece in that fold. 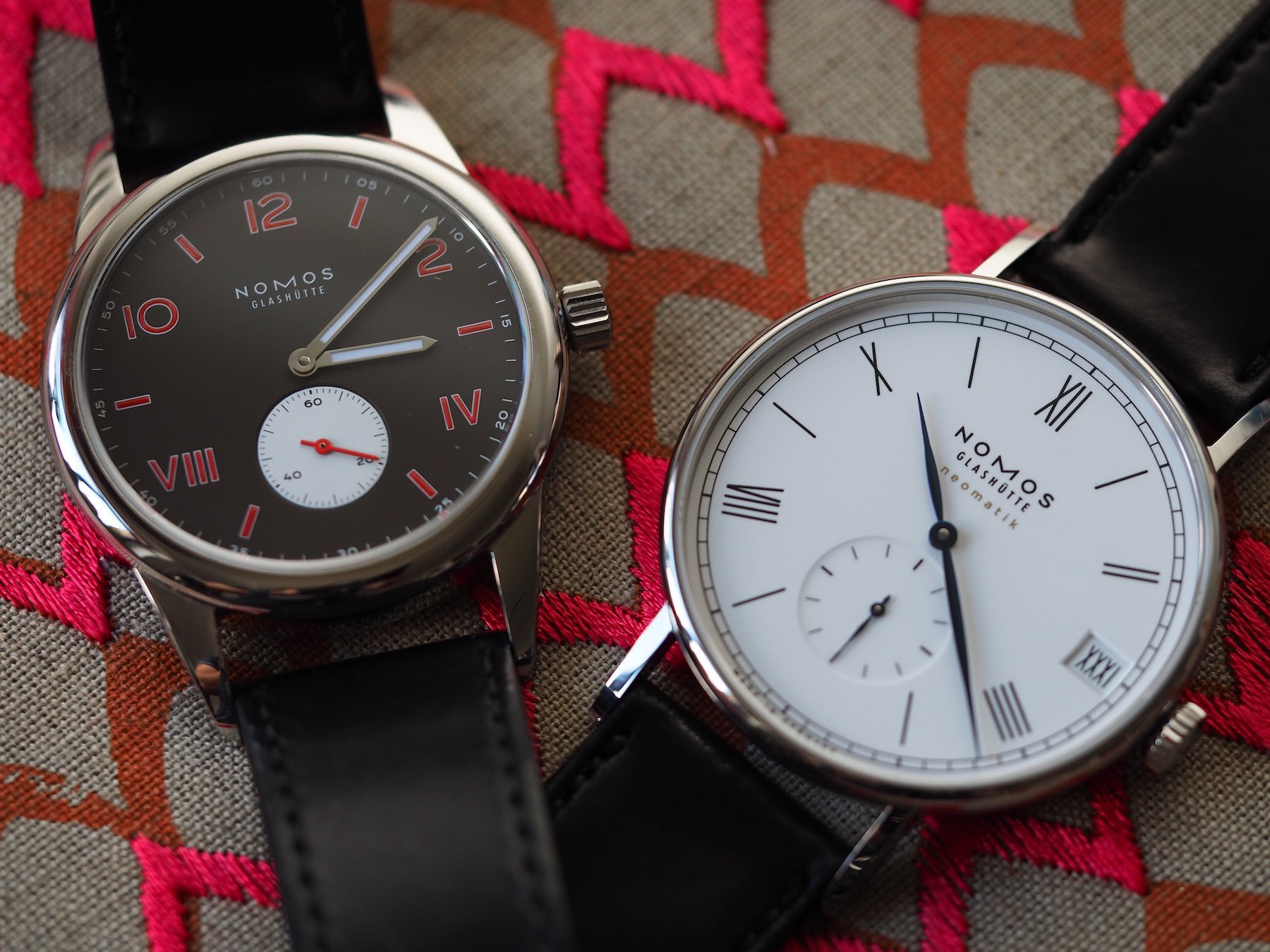 Aesthetically, the thing I find most interesting about this model is the Roman date. That is pretty rare. And while I can live without a date on most of my watches, it is becoming something I appreciate more and more. Normally, I want the date to be as obscure as possible. I don’t even want to see it. I want it to be there when I need it, but otherwise, it is at liberty to hide itself as effectively as it sees fit

Here, however, NOMOS embraces a different strategy entirely. The creation of the DUW 6101 meant NOMOS was finally able to locate a legible date at 3 o’clock. If form should follow function, then a date at 3 o’clock makes sense (for a righthanded user). That’s the part of the watch that protrudes first from the cuff and, therefore, is the first area of the dial that can be read.

In the early days, NOMOS’s movements were not large enough to make an aesthetically pleasing (or even particularly legible) date window at 3 o’clock, so the brand opted for symmetry instead. Incidentally, that also enabled designers to fill the gap between the sub-dial and the edge of the dial at 6 o’clock with something practical.

With the NOMOS Glashütte Ludwig Neomatik 41 Date, the large (frankly unmissable) date window is the star of the show. Its Roman numerals continue the dial theme and hammer home the fact that this is an unapologetically refined modern classic. Love it or hate it, it’s hard not to respect it… 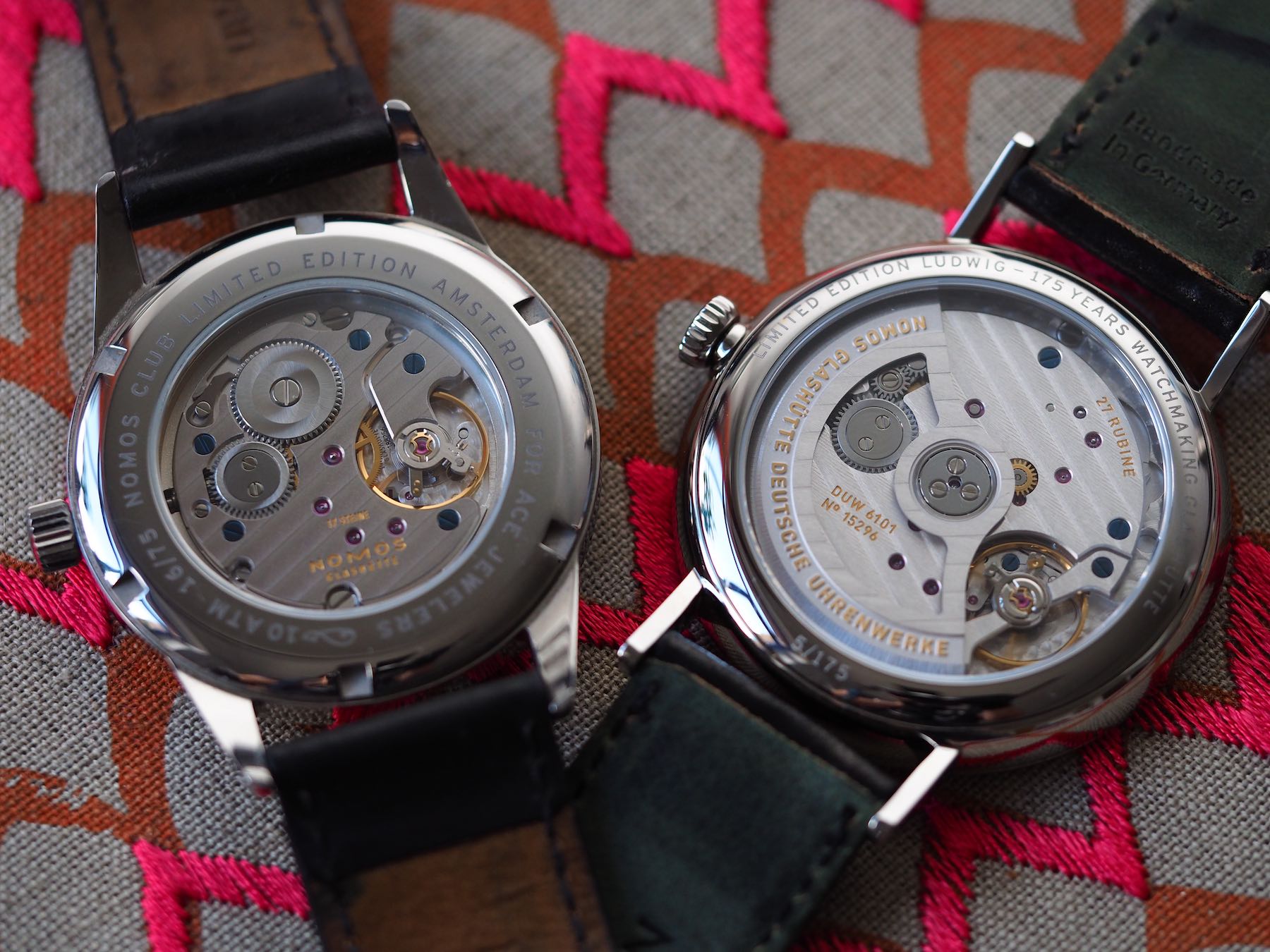 NOMOS Glashütte has matured into something a long way from the brand it set-out to be in the ’90s. It’s hard to believe that even Roland Schwertner — the visionary founder of the brand — could have expected such a development, but having worked in his presence for three years I cannot exclude the possibility entirely.

The NOMOS of today is not, nor can ever again be the NOMOS of yesterday. The company has invested heavily in independence. It has invested heavily in innovation. The brand’s future success is now tied to its existing clientele adapting to a new mission statement and a new (higher) price point, while simultaneously poaching new buyers away from other brands known for high-end watchmaking in this segment. Can the NOMOS Glashütte Ludwig neomatik 41 Date do that? At €3,216 it has its work cut out. But look for it to have some success in the DACH region among more conservative customers. The fact that this very special model will be limited to just 175 pieces will also surely result in a fast sell out. 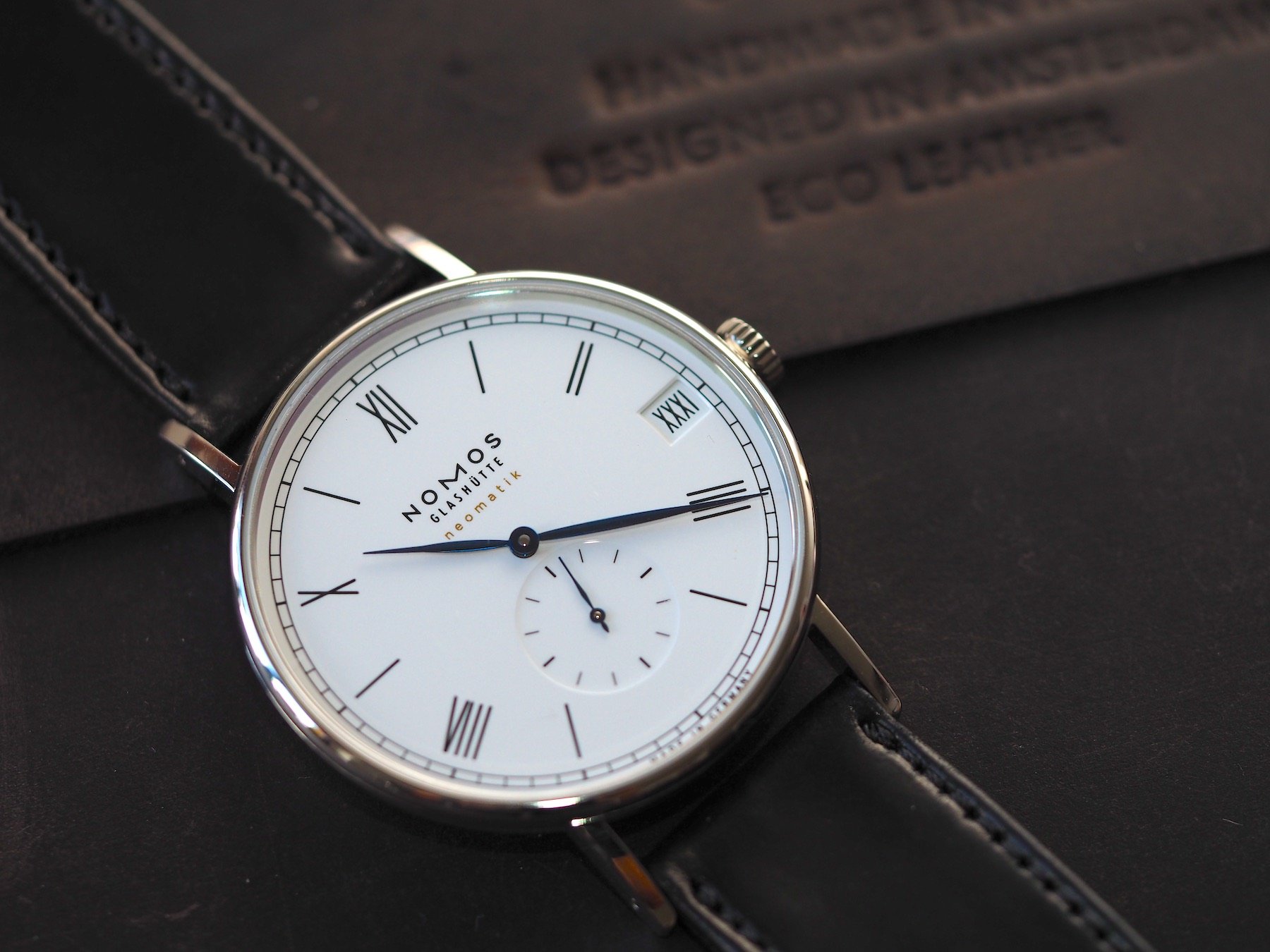 Alone in a crowd

But perhaps NOMOS Glashütte’s uniqueness is part of its problem. There are incredibly few brands doing what NOMOS is doing at this price point. Even fewer on what is still a relatively small scale. NOMOS Glashütte’s ambitions are expensive to meet. To create an almost-entirely in-house caliber without the volume-activated price breaks of six-figure production is hard. It requires excellent communication, time, and a willingness of the community to listen and learn. I think NOMOS can probably rely on the latter. And I’m hoping that the next decade sees the completion and full acceptance of one of the pluckiest metamorphoses the industry has ever seen. Learn more about the brand here.