It’s not exactly a secret that round watches are an easier sell than their square counterparts. If you ask around industry experts, you’ll often hear the “10%” rule thrown about, suggesting that nine out of every ten watches is round. But that doesn’t mean the remaining 10% comprises naught but squares! No, the humble square watch has all kinds of creative shapes to fight against for your attention. Tonneau cases, rectangular cases, ovals, rhomboids, shields, and all kinds of “gons”. When it comes to true square watches in the modern industry, however, there is one that always leaps to my mind first. I am (obviously) talking about the NOMOS Glashütte Tetra, one of the four models that have been ever-present in the brand’s catalog since its inaugural launch in 1992.

NOMOS presented its first range of watches in 1992, two years after the brand’s foundation in 1990. That first catalog contained just four model families. In the early years, the brand’s entire reputation rested on the fortunes of the Tangente, the Orion, the Ludwig, and the unapologetically angular Tetra. 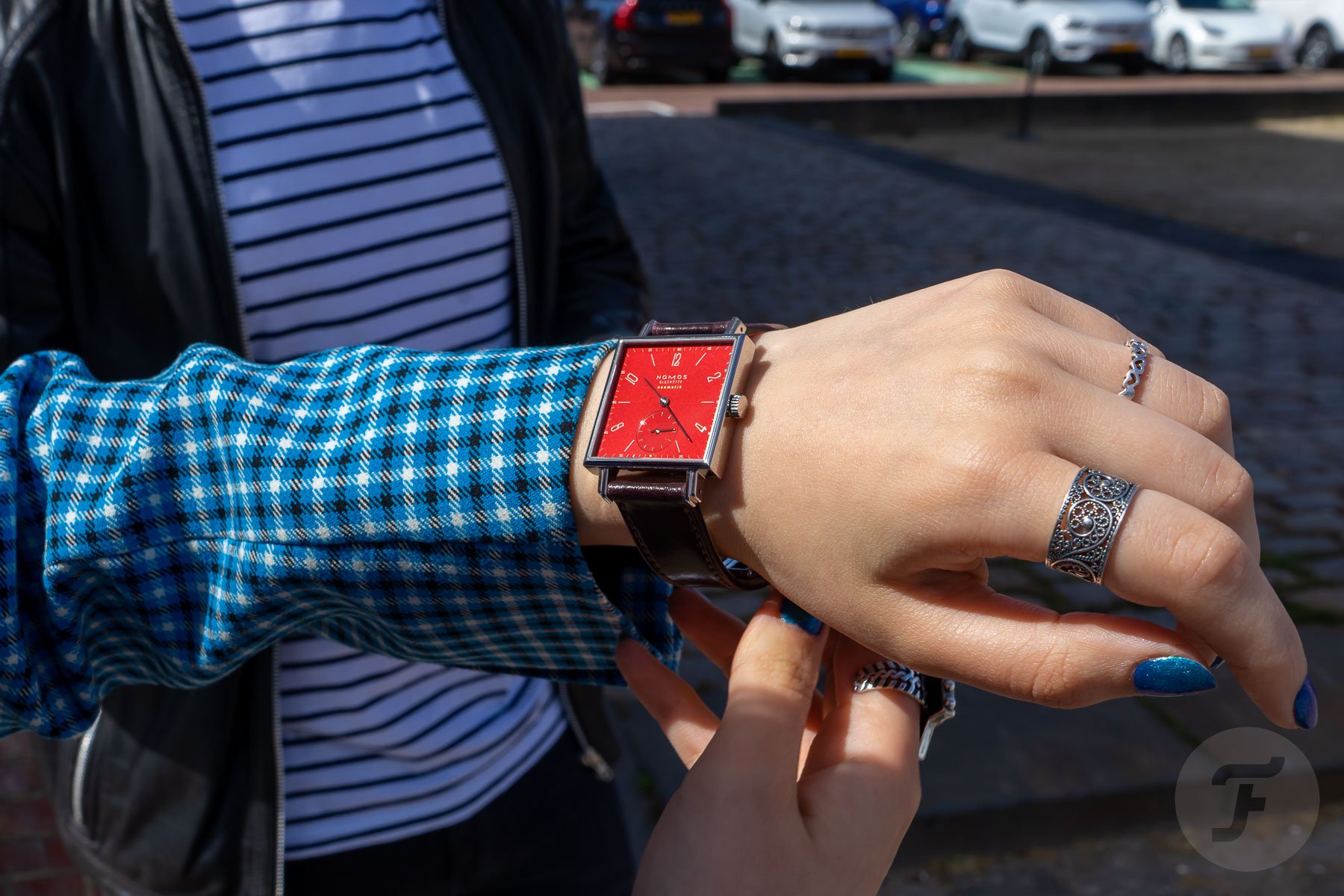 Everyone knows the Tetra is a controversial watch. NOMOS Glashütte knows that best of all. It is a perfect square, it’s generally pretty small, and it has “love them or hate them” deco-inspired lugs. It also usually comes on the suede straps that, rightly, exist in the long shadow of NOMOS Glashütte’s excellent shell cordovan leather. Finally, and perhaps most controversial of all, the Tetra often sees a range of thoroughly bonkers colorways. 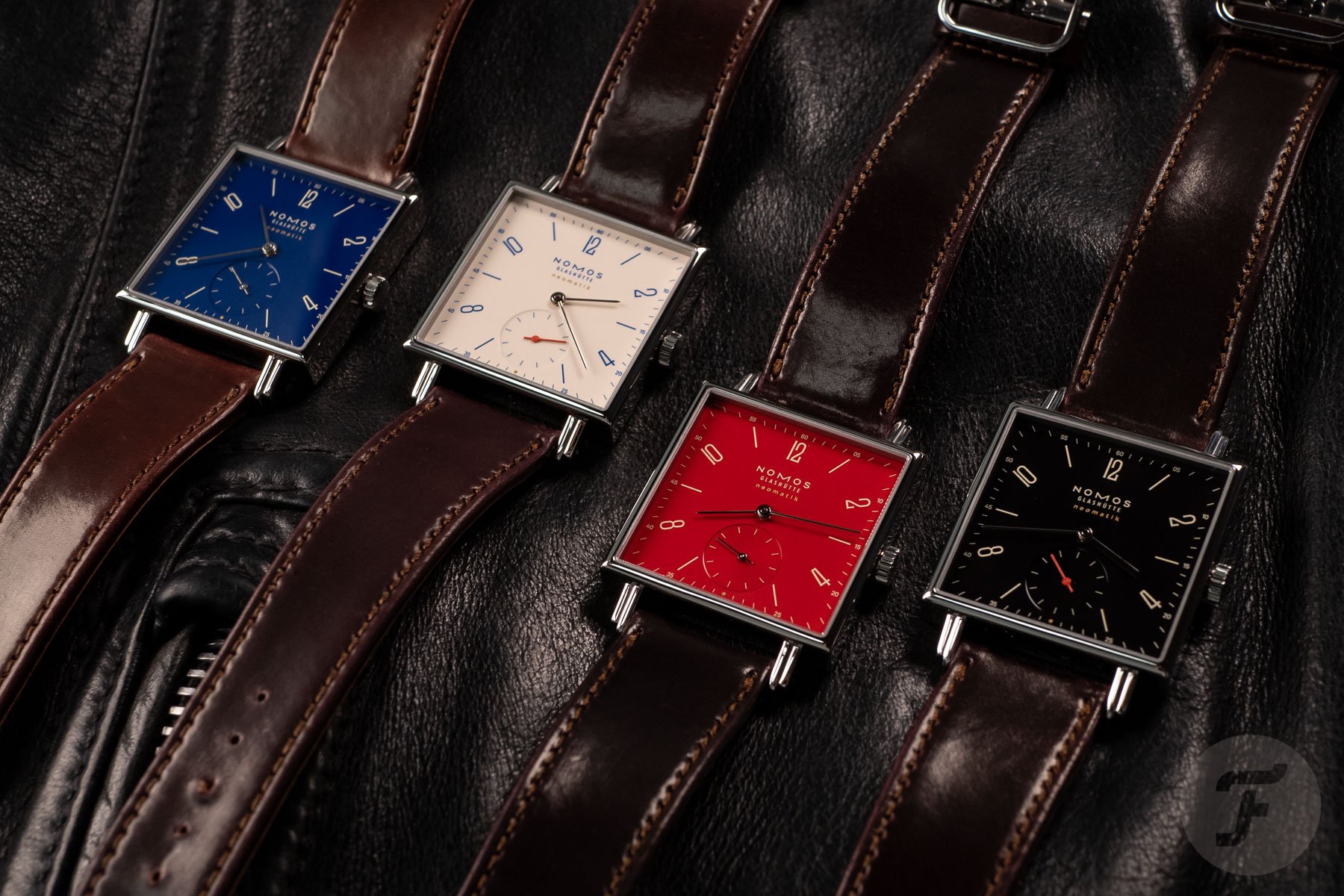 However, the secret to the range’s success and longevity no doubt has that last point of controversy to thank. NOMOS regularly updates the colors of the Tetra’s dials before brutally culling them after they’ve had as little as a year in the sun. 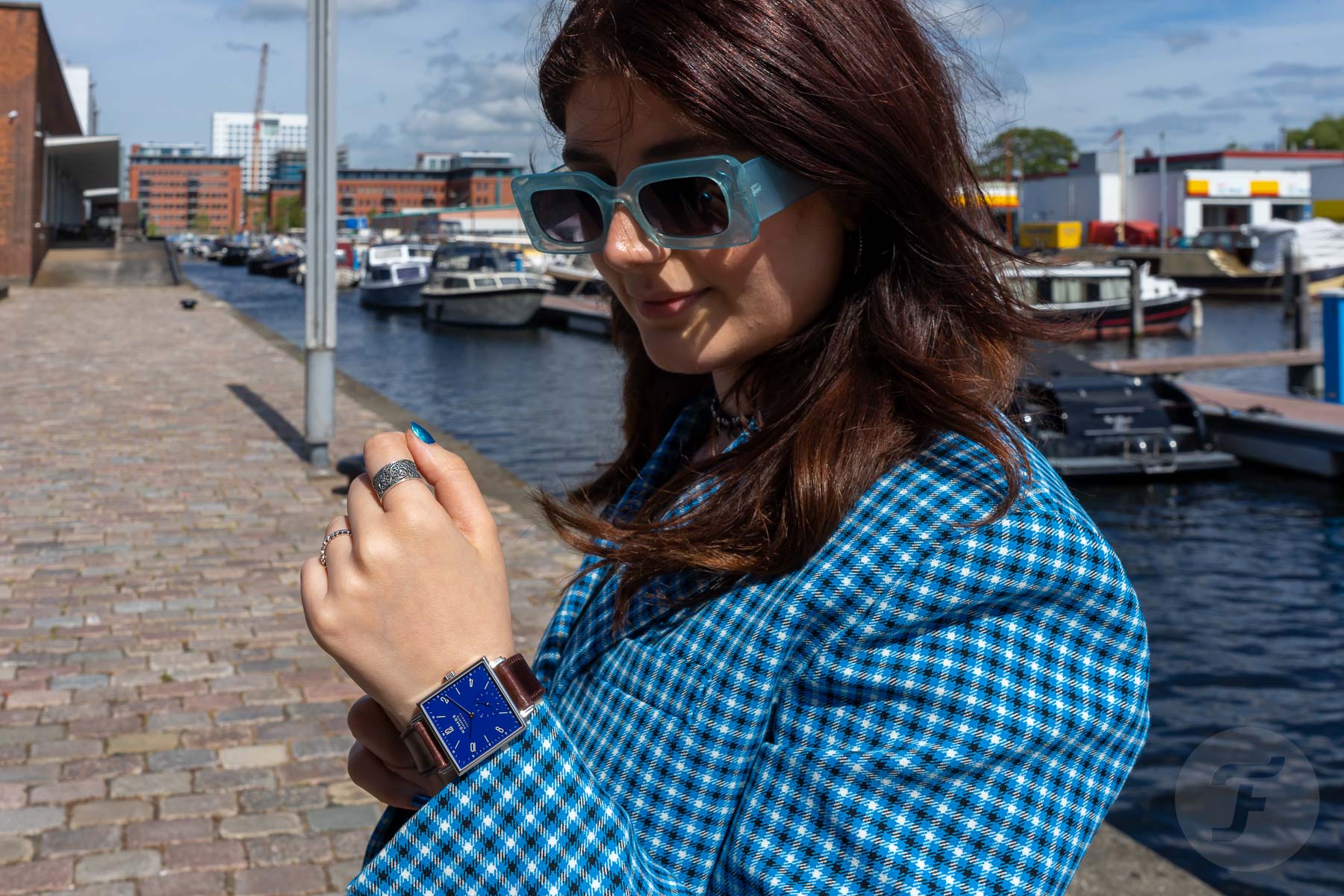 To some, this may smack of indecision. To me, it smacks of strategy, but then, I’m not exactly guessing… As you may know, I’m in an uncommonly informed position regarding NOMOS, having worked for the brand for three years. Consequently, I can say with absolute certainty that it is strategic. 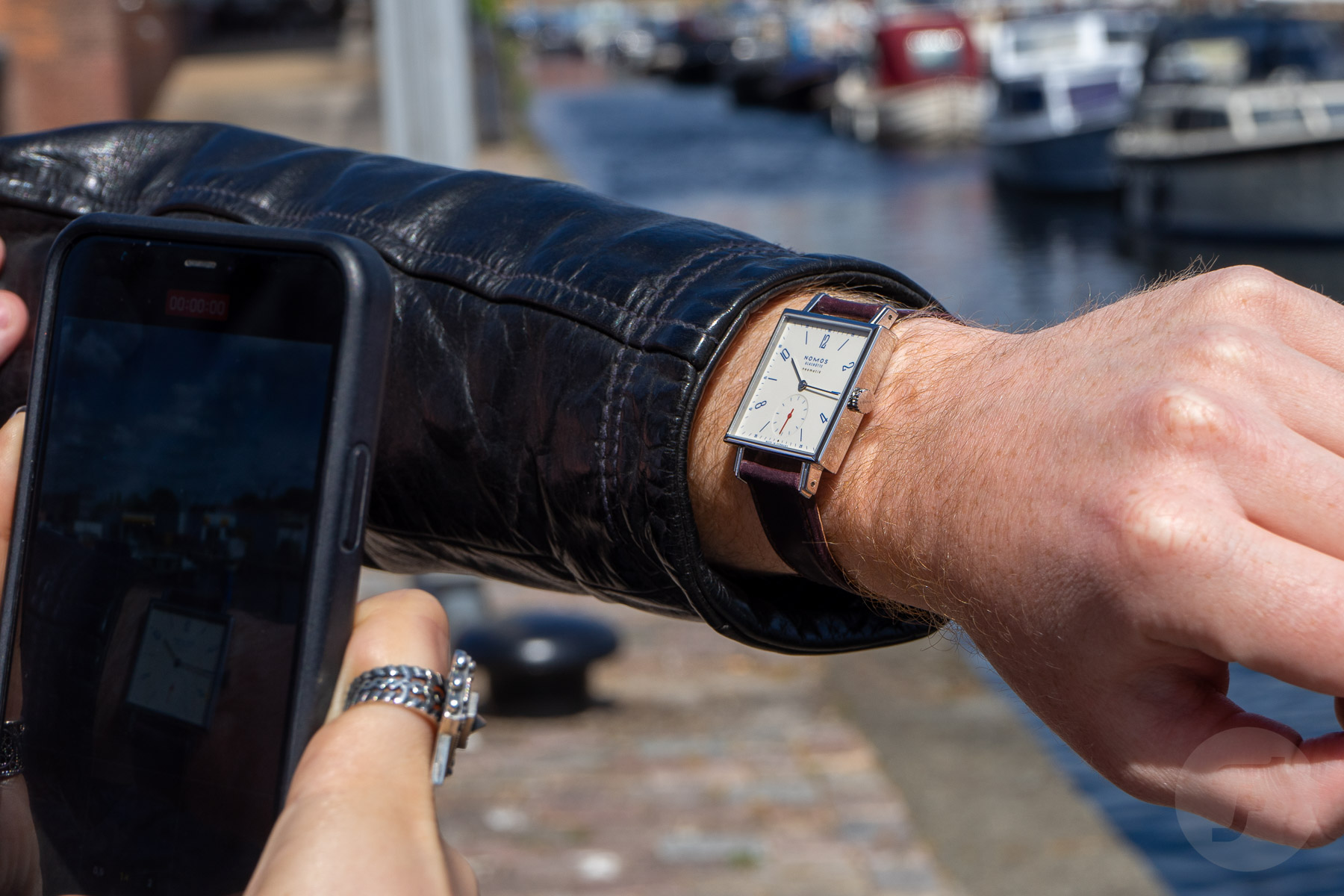 In its base form, the Tetra split opinion. Why not, then, make the splitting of opinions a central tenet of the family? It was never and never will be a market leader for the brand. It is, however, an essential component of the whole. Ironically, the inclusion of the square Tetra in the modern catalog rounds off the brand’s edges and makes it feel complete. 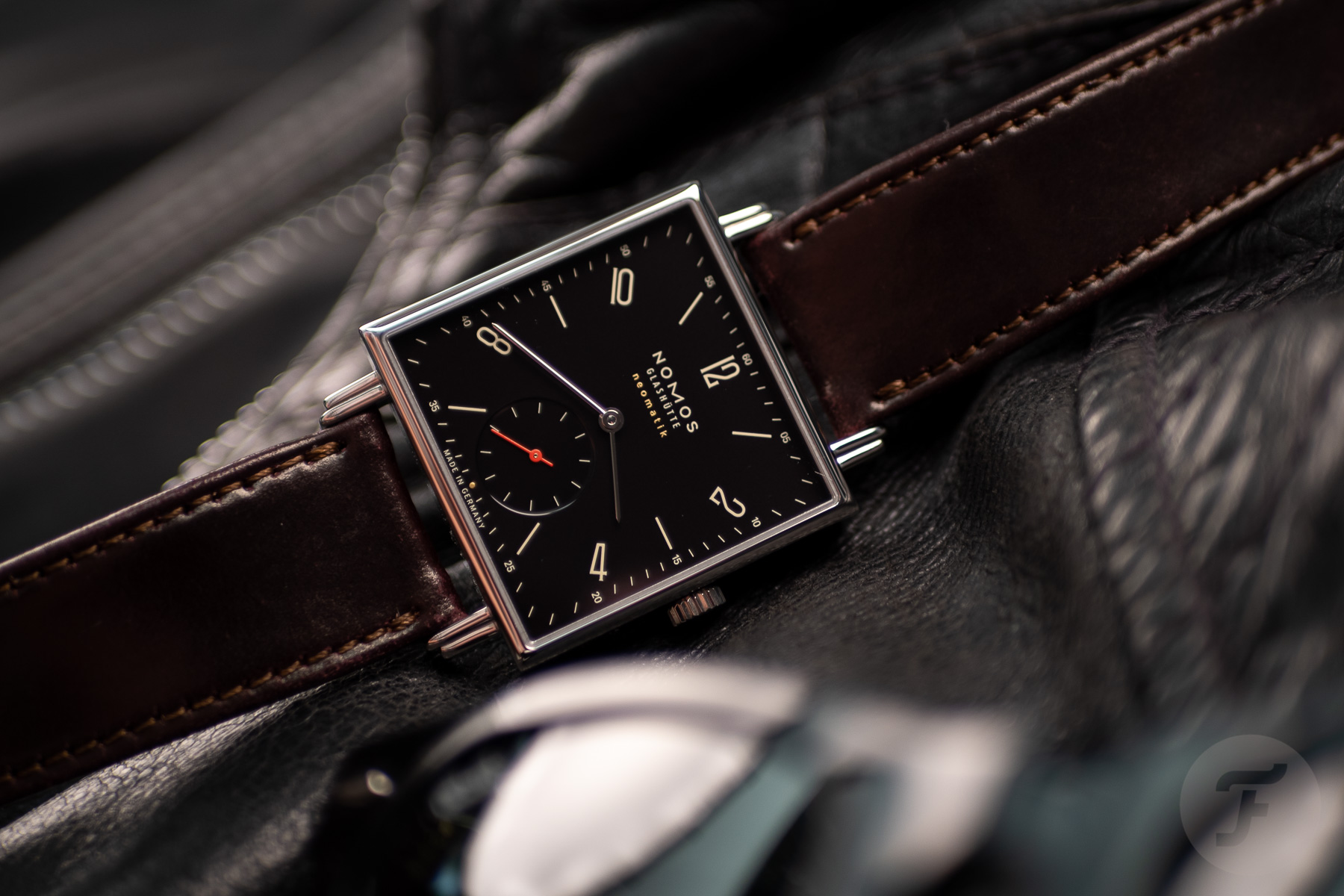 Certain releases carry a great deal of pressure. Certain models have high expectations. If targets are the be-all and end-all of your goal, it’s hard to be creative. NOMOS is comfortable with the edgy Tetra line being a place for expressive freedom. It can take risks other models simply cannot. 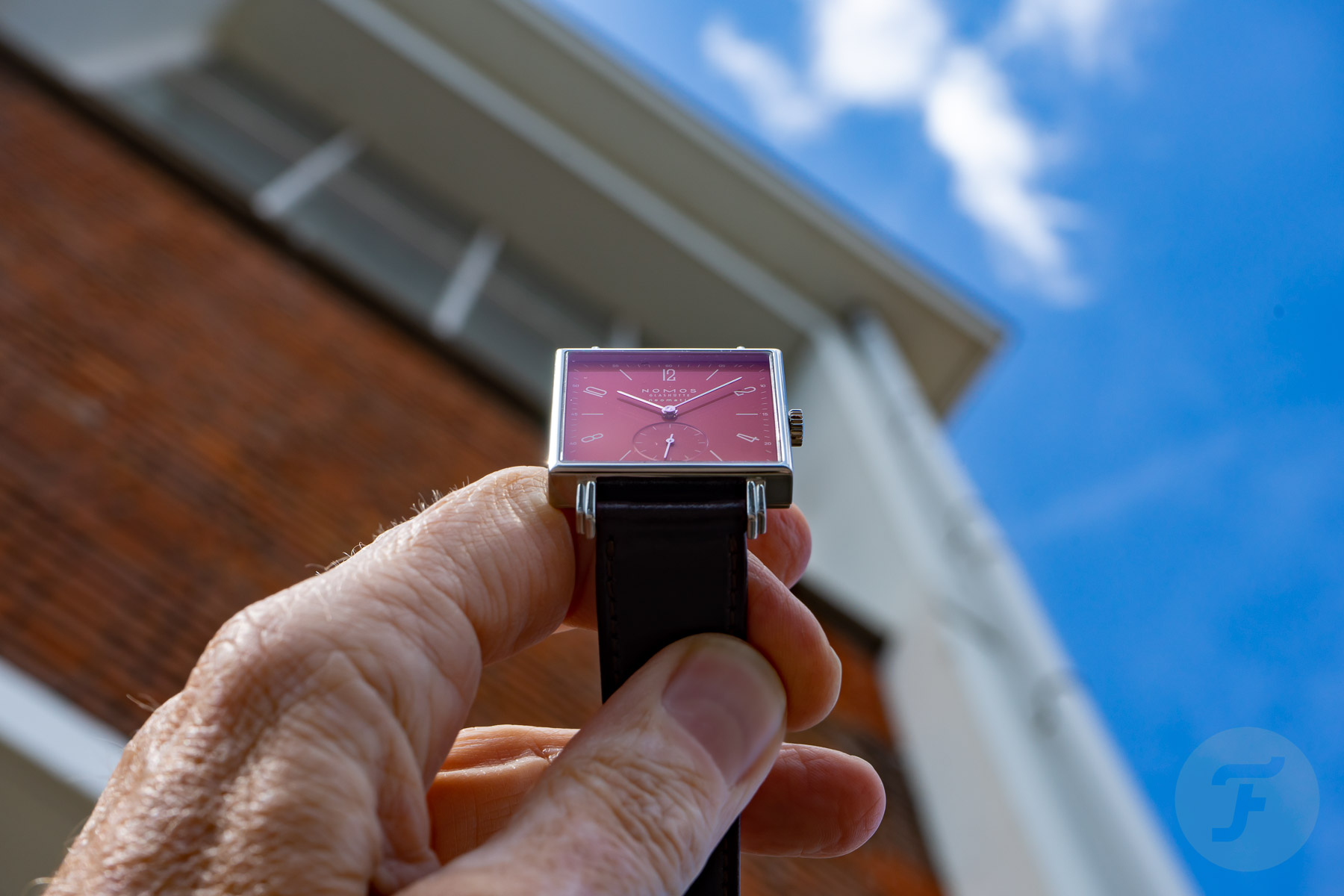 Can you imagine a Tangente released in a similar colorway? It would be deemed reckless and while it would no doubt thrill a few of the model’s more eccentric followers, it would raise eyebrows among the conservative core that keeps the 35mm Tangente right near the top of the brand’s best sellers year in, year out. 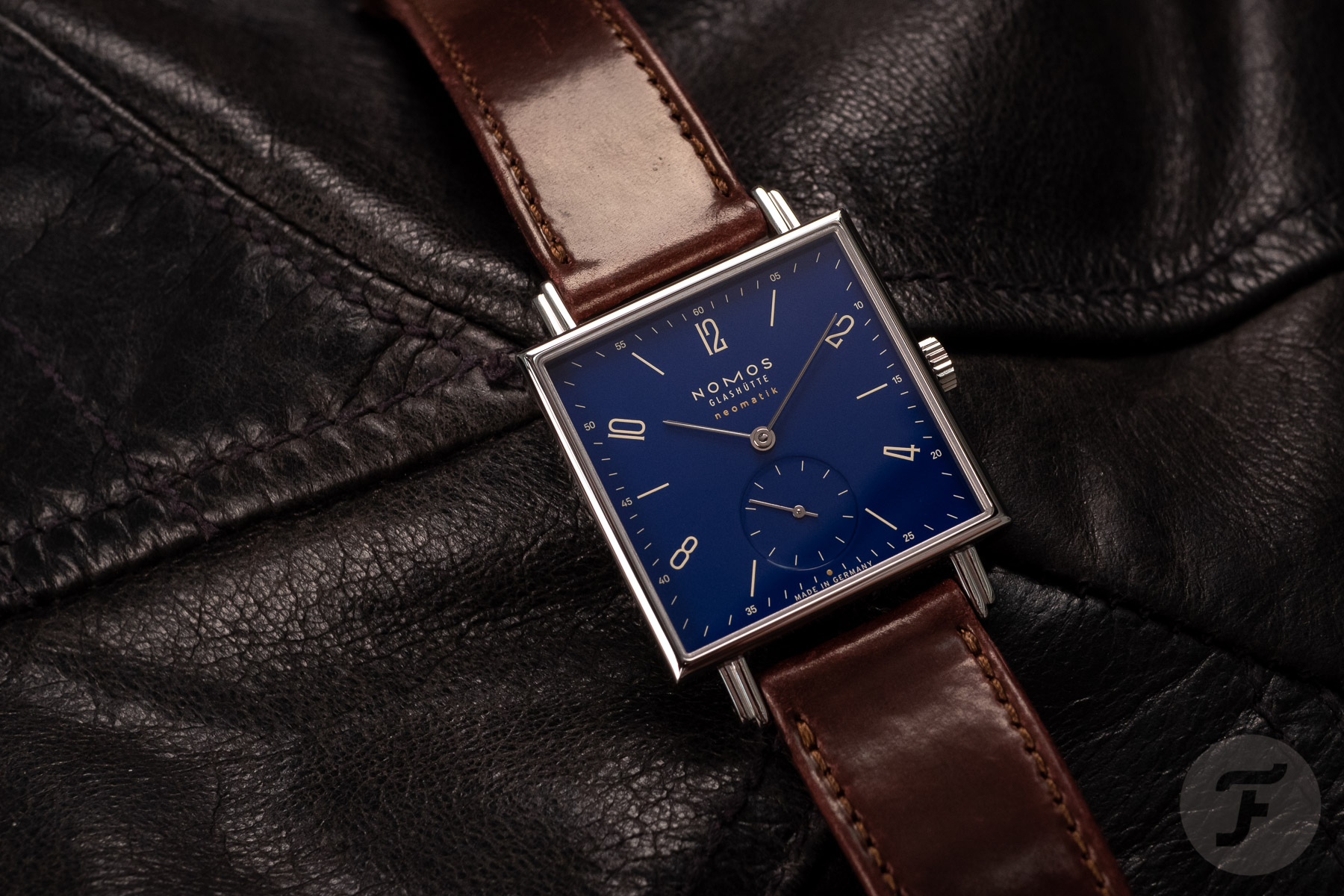 The Tetra is the brand’s wild card. Ironically, it is the catalog’s black sheep. These latest neomatik models may well follow the tried-and-tested pattern of releasing striking, challenging colors for the daring consumer. Here, however, for the first time, we see this strategy deployed on the largest model in the Tetra collection. 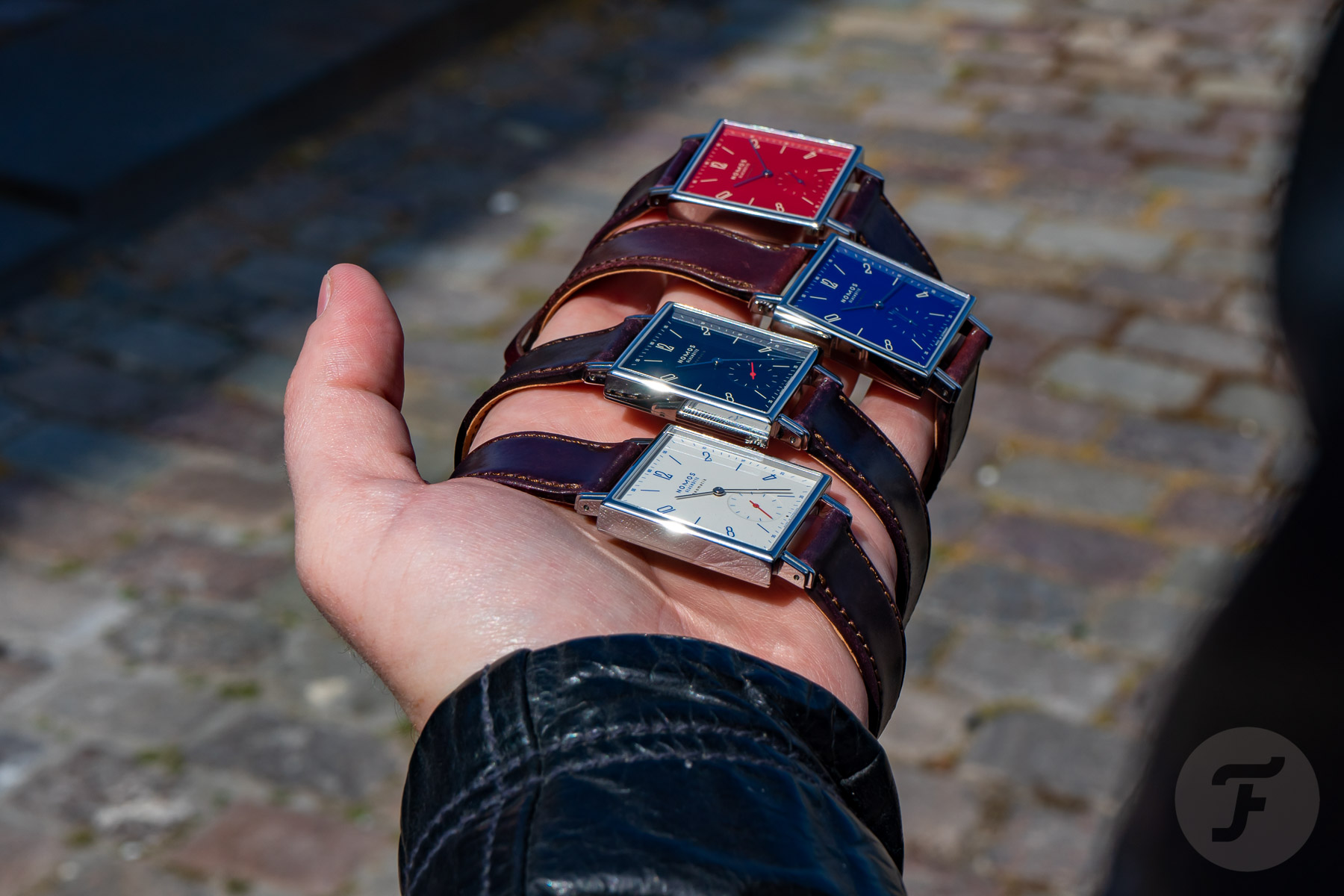 On paper, the Tetra neomatik’s 33 × 33mm measurements may not sound enormous. But due to its square shape, that means this watch comes in at 46.67mm from corner to corner. That’s a serious portion of real estate on the wrist. Better still, these watches are powered by the brand’s super-slim automatic DUW 3001 caliber, meaning that despite the joyful controversy, they could quite easily act as everyday watches for the edgier folk among you. 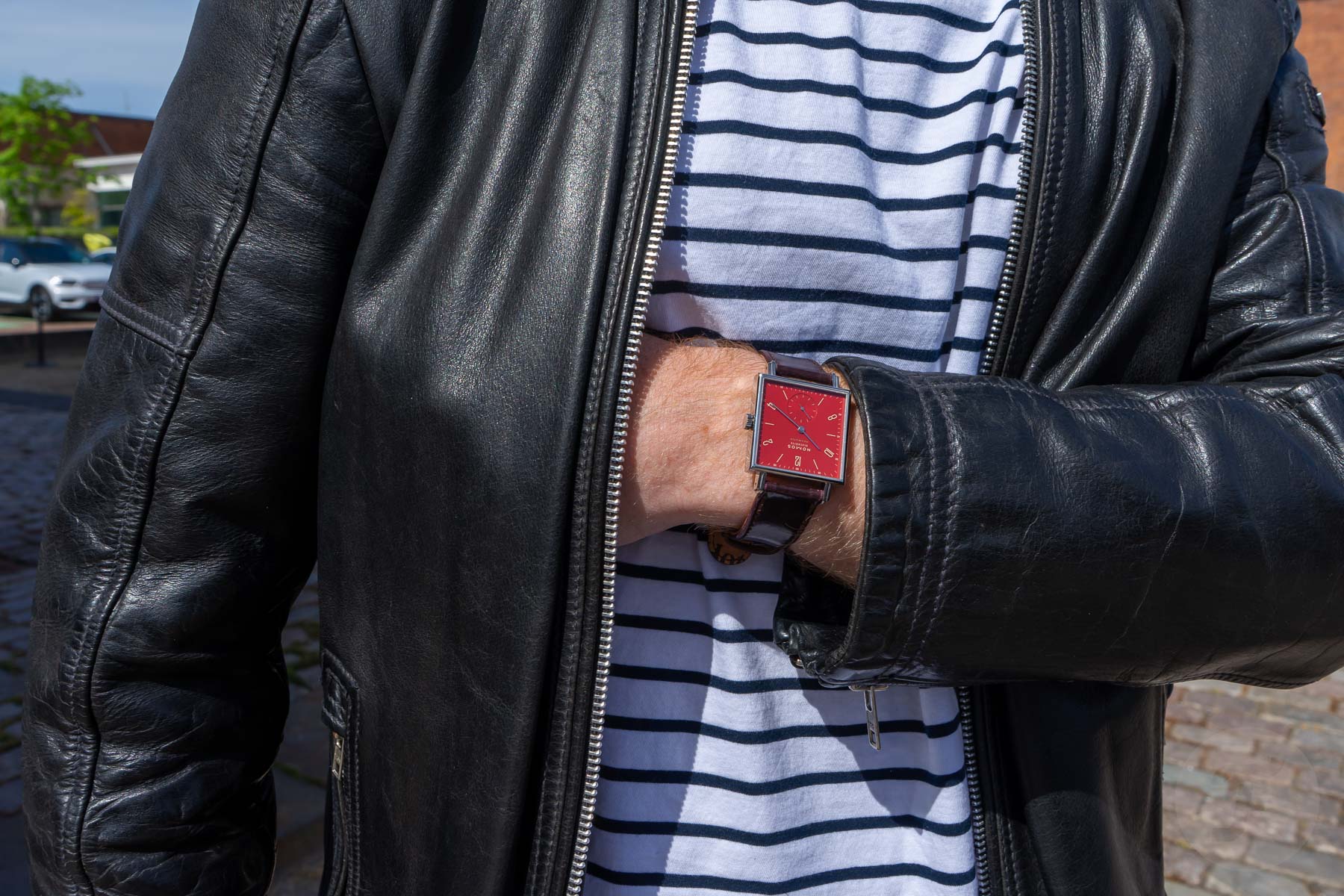 From the Berghain to the Boardroom

If you’re from Berlin, you will know what the Berghain is. Heck, if you live anywhere in Germany, you probably will. And though many well-traveled and highly-cultured Fratelli may know as well, for those who do not, let me explain. The Berghain is one of the German capital’s most exclusive and beguiling nightclubs. Its queues often stretch along entire streets, and would-be clubbers are turned away at the door for not having put enough effort into their outfits. 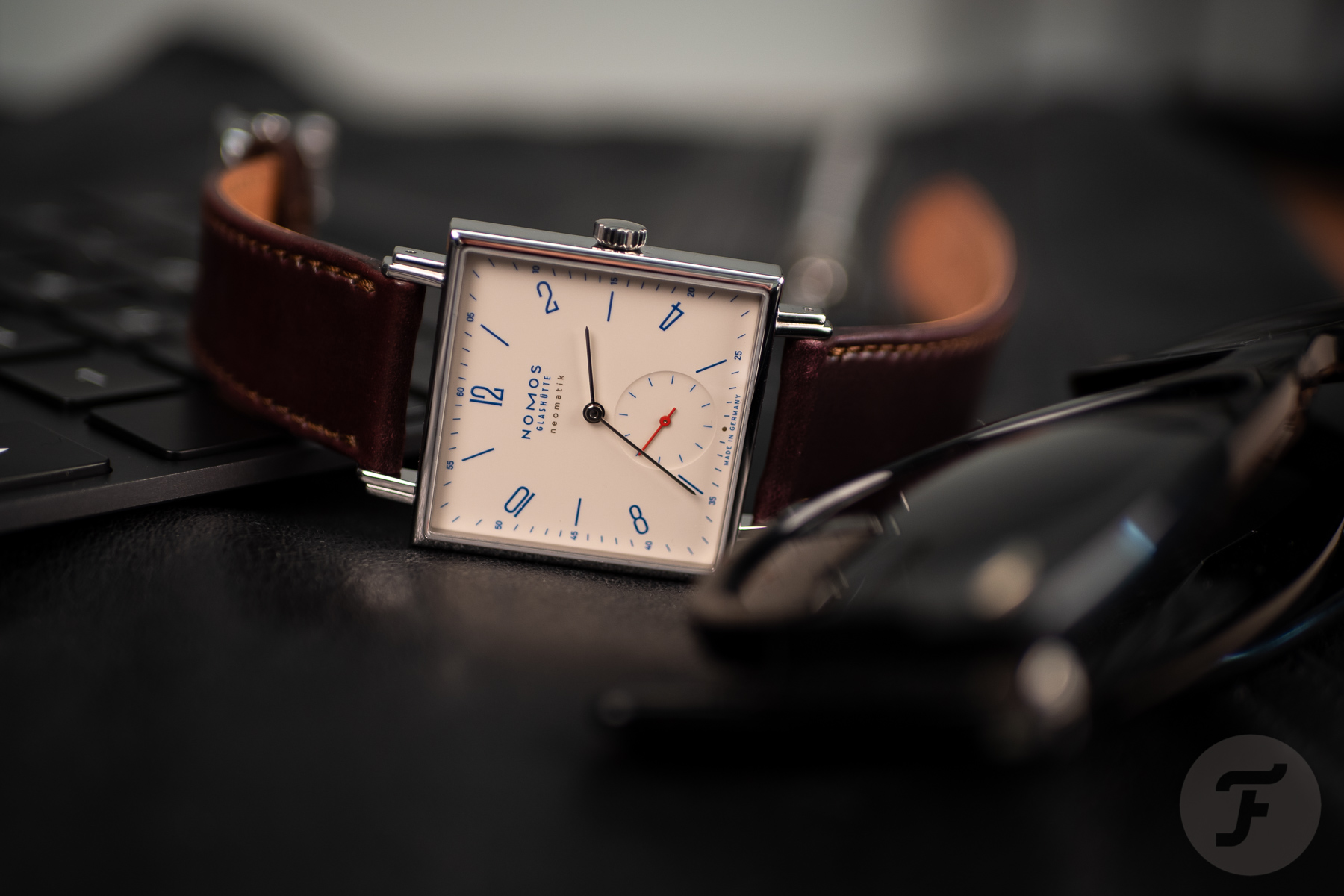 A night in the Berghain will surely be one to remember, and it, like the visual impression of these Tetras (envisaged by NOMOS as the perfect balance between fun and formality rather than specs and slickness) will most certainly leave its mark. 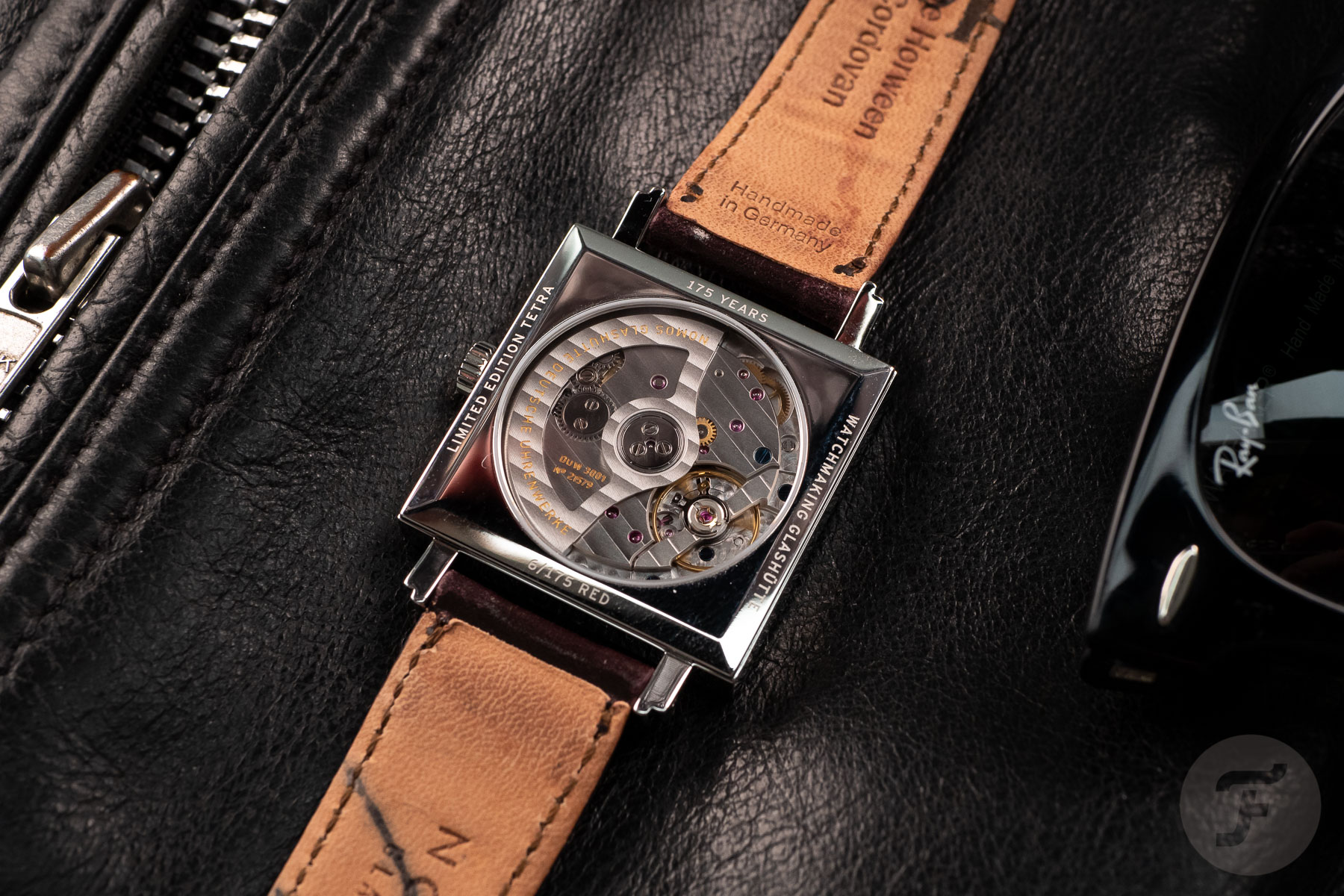 Unusually, these “33mm” Tetras are presented on a brown shell cordovan strap. This mixes things up in a way that I haven’t seen from the brand for quite some time. Truth be told, I’m struggling to remember a NOMOS Glashütte watch presented on a brown shell cordovan since the discontinuation of the original Club line (which was usurped by the even more affordable and playful Club Campus series). And even then, those brown leather straps had red stitching. Here we get the seldom seen and “beautifully bog-standard” shade, which is my favorite of all the shell cordovans that NOMOS has offered. 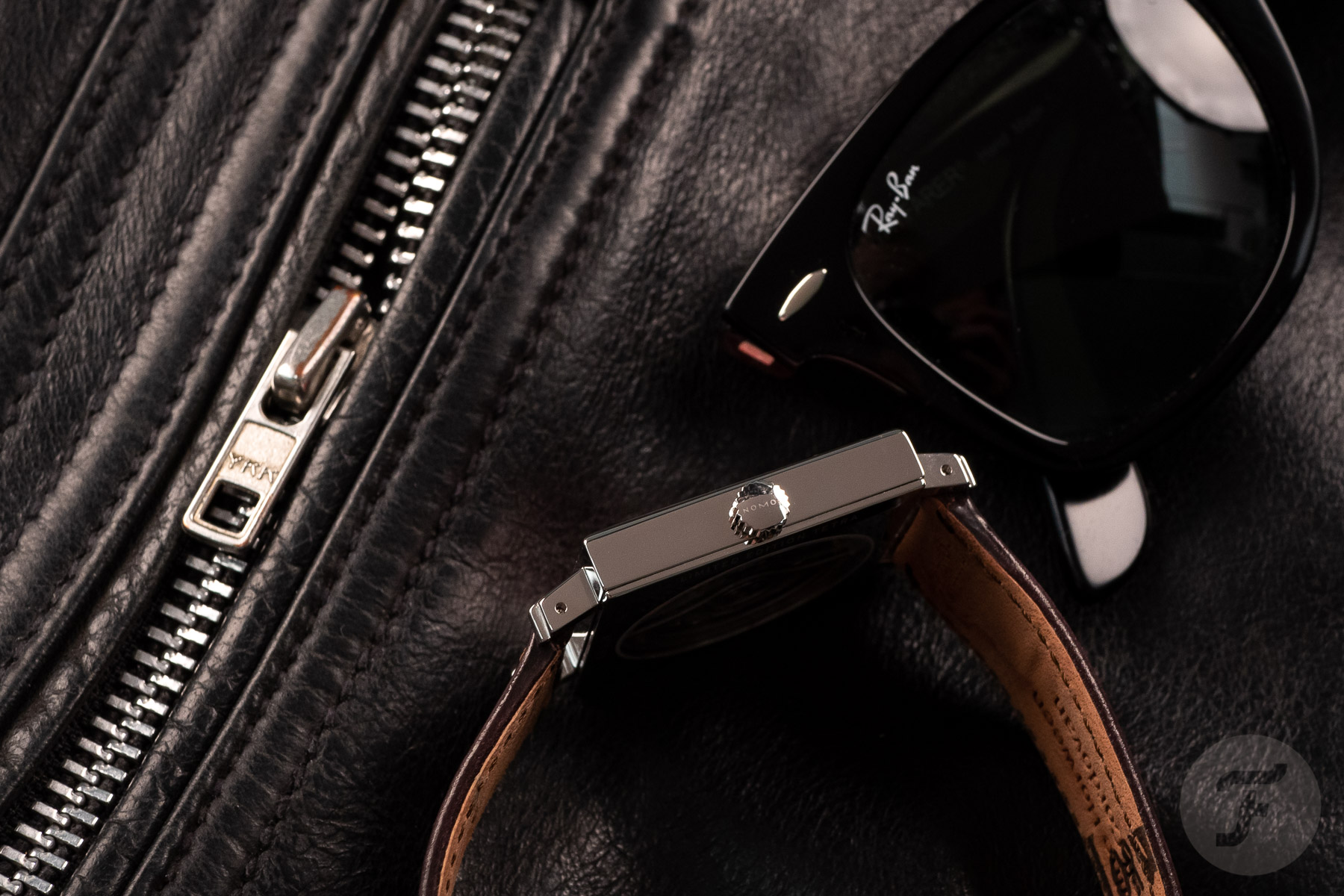 Seriously, the “all brown” shell cordovan strap is terribly underrated. With NOMOS’s famous “grainy” silver dials, the warm tones of the brown link up with the off-white visage, forming the kind of comfortable pairing that makes one think of reaching for a knitted hat and mittens. 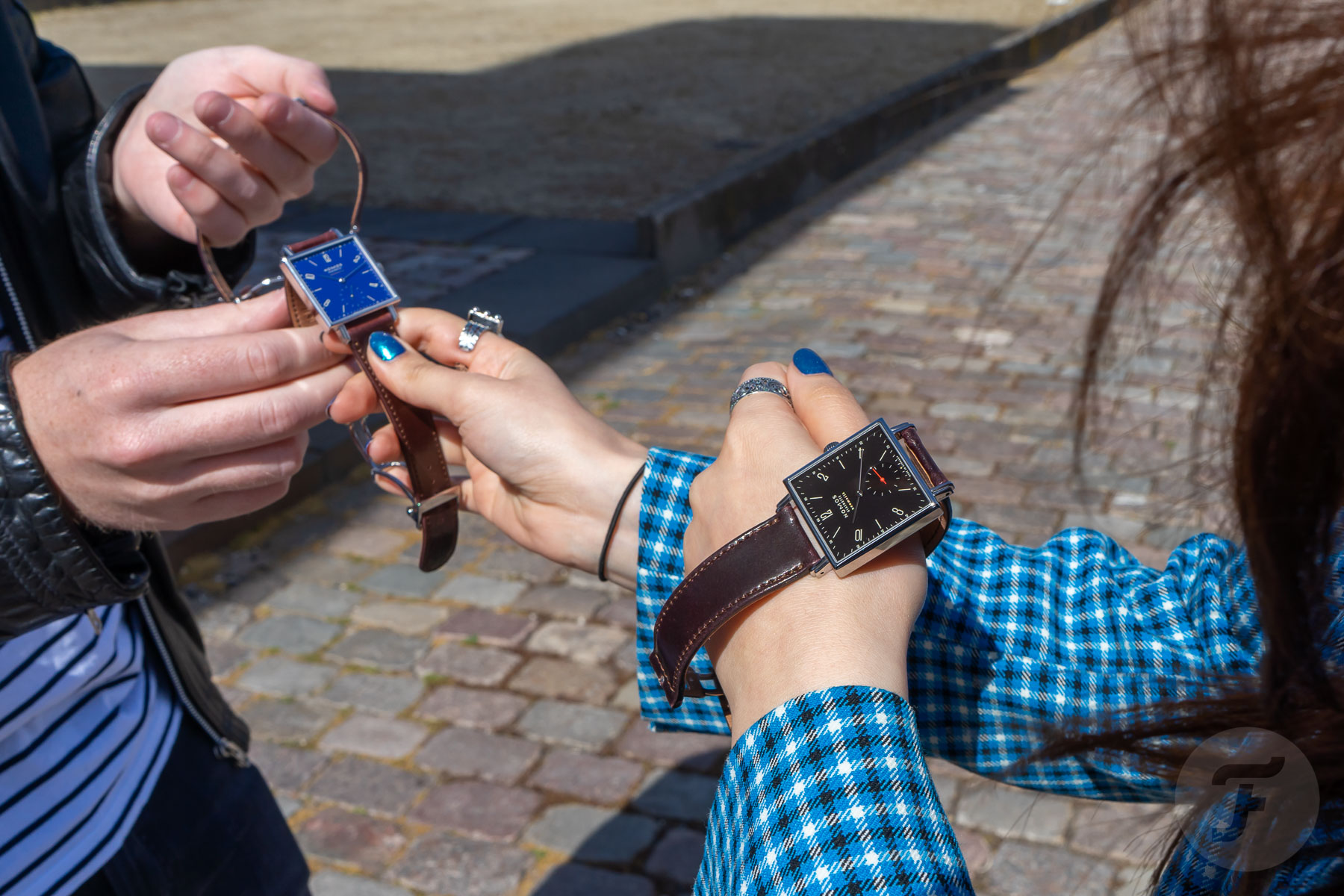 Speaking of autumnal clothing, these shades are especially appropriate for the year’s third quarter. My personal favorite is the red (I seem to be a sucker for red-toned Tetras). That said, I also love the subtle brilliance of the cream, which I think has all the makings of an endlessly intriguing daily wear. 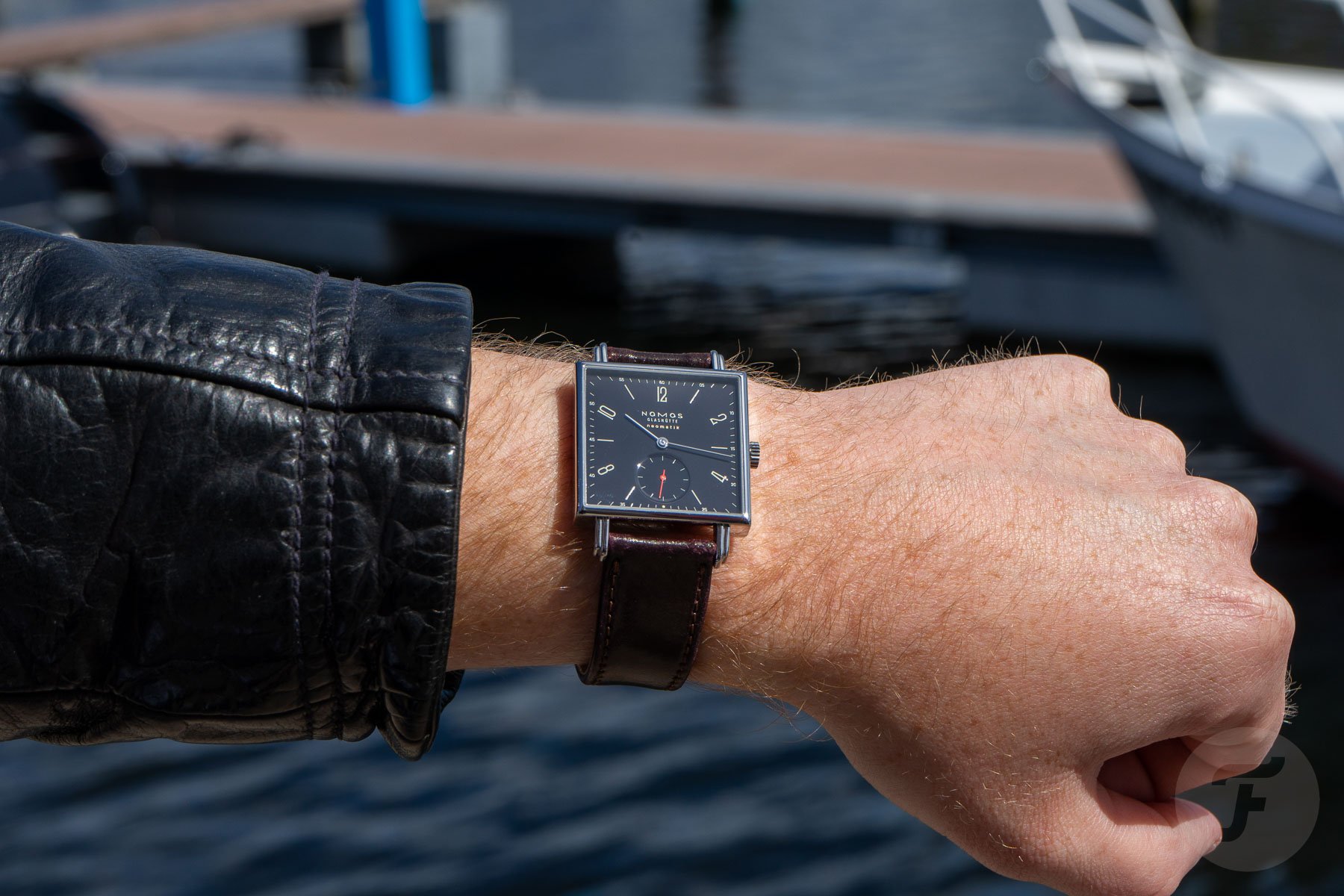 Oddly, the brighter blue than sported by the previous Tetra 33 is my least favorite here. When it comes to the Tetra, you might as well go loud or go home, and nothing screams quite as loudly as the red. 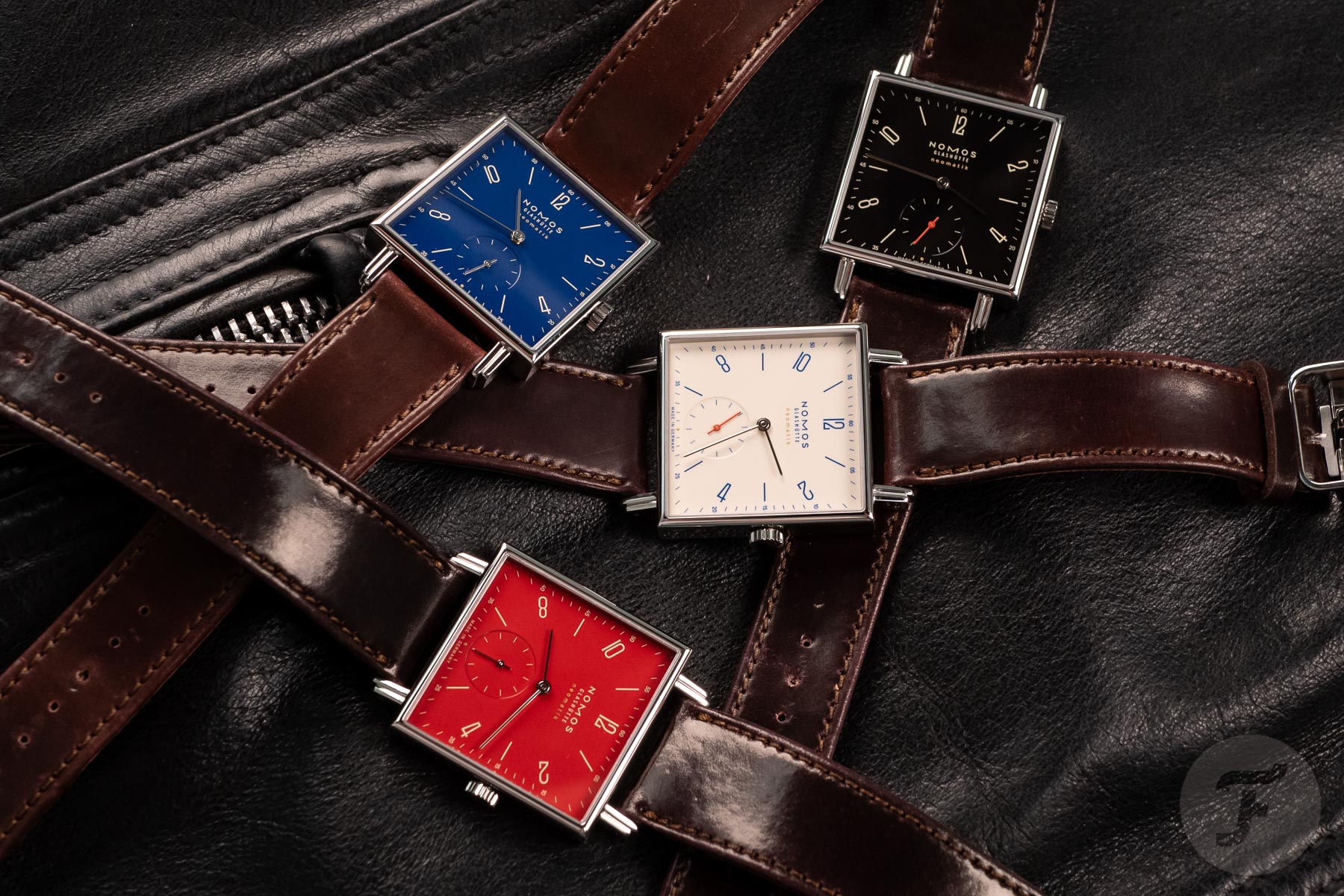 These Tetra neomatik models will retail for €3,060 each and are available now. Since they commemorate 175 years of watchmaking in Glashütte, each colorway is limited to 175 pieces and individually numbered. Granted, with their square shape and vivid dials, these watches will not be for everyone. But if NOMOS continues its practice of rapidly refreshing the Tetra line, it’s safe to assume these colors won’t stick around past this run. So, if you’d like to secure one of your very own, head on over to the official NOMOS Glashütte website to do so.