This isn’t the first time we’ve seen watch brands team-up with their very own dedicated community channel, but it’s certainly one of the first times we’ve seen a retailer broker the deal. We’ve all heard of the Paneristi. We at Fratello are intimately acquainted with the #SpeedyTuesday community supported by Omega. But now @NomiesForLife joins the fray. Thanks to NOMOS Glashütte’s faithful friends at Ace Jewelers we all have another limited edition to fawn over. And it does deserve some serious fawning…

This feels like a dream come true, even though it is not my dream. This collaboration marks a very special moment in the watch creation community. It is rare to see three-way collabs. It is rarer still that they result in such an awesome timepiece that few could have seen coming. Yes, the NOMOS Glashütte Club Campus 38 is a ripe canvas for expression. Ace and NOMOS have worked together before using this base model. That effort brought us the Club Campus 38 Amsterdam, a watch I own and love. This one, however, is quite different, and the brainchild of Michiel, @NomiesForLife founder, and the passionate community that supports his channel. 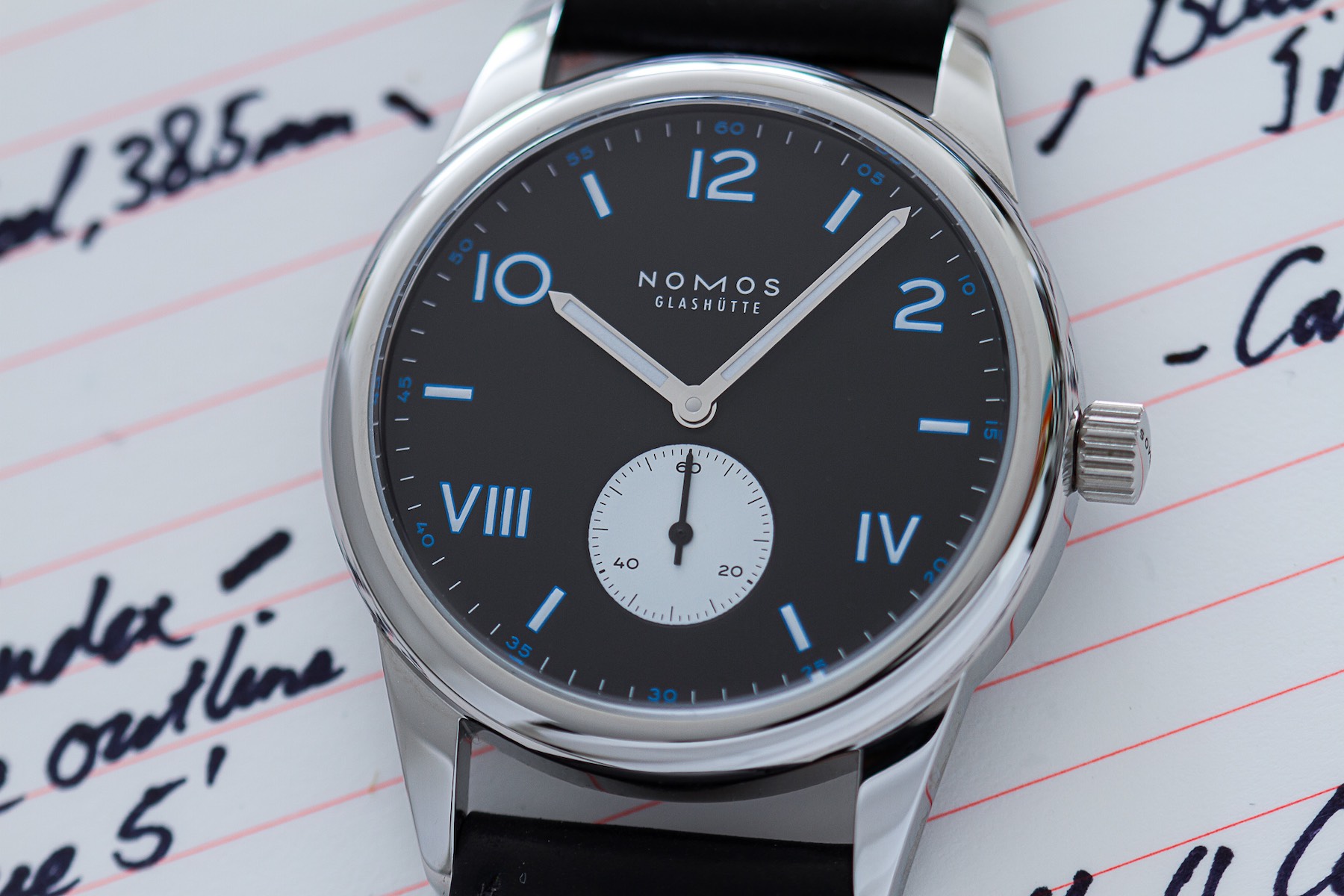 There are two reasons why this watch feels like a dream come true to me. Firstly, my mind shoots back to showing Dale and Jenna of Ace Jewelers around Glashütte on behalf of NOMOS during my time with the company. As is customary, we paid a visit to the NOMOS boutique on the “high street” of Glashütte. The boutique is a popular spot for NOMOS enthusiasts as it stocks a selection of rare, often discontinued pieces that aren’t available anywhere else. While we were there, Dale spotted an old, black-dialed Club that had left the collection sometime prior. 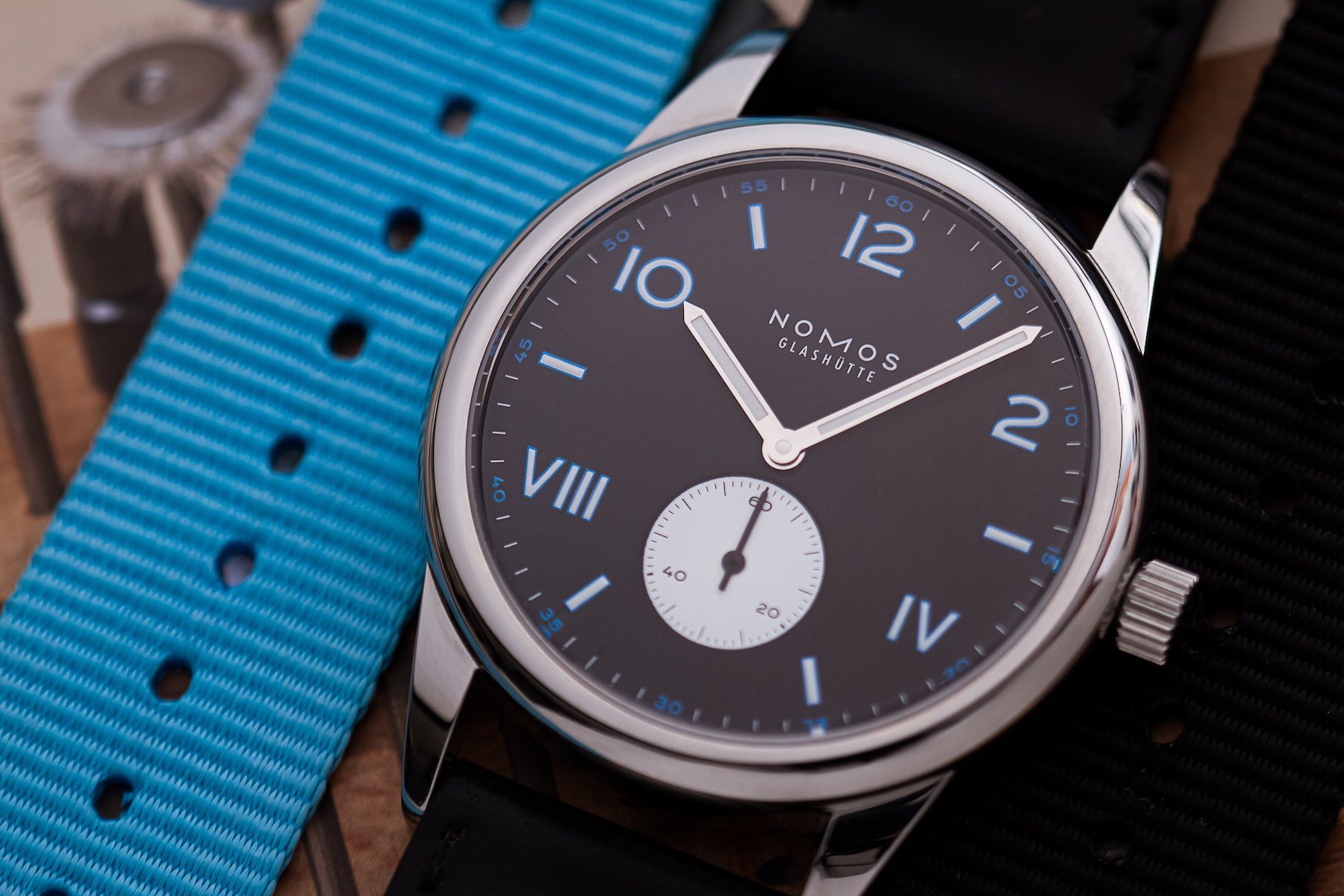 Immediately excited, he hammered out a text to Michiel, who has been a long-time fan of that particular reference. Enthused by the opportunity, Michiel took the watch. I think the memory stuck with me so vividly because it highlighted the important roles played by each of the three agents at work in that transaction. NOMOS Glashütte created a really nice watch. Michiel dreamed of owning that piece. And Dale, as diligent a retail servant as you can hope to find, not only banked that knowledge but acted immediately to bring joy to his friend and client. If ever people wonder what role traditional multi-brand retailers have yet to play in the luxury watch industry, that is exactly it. 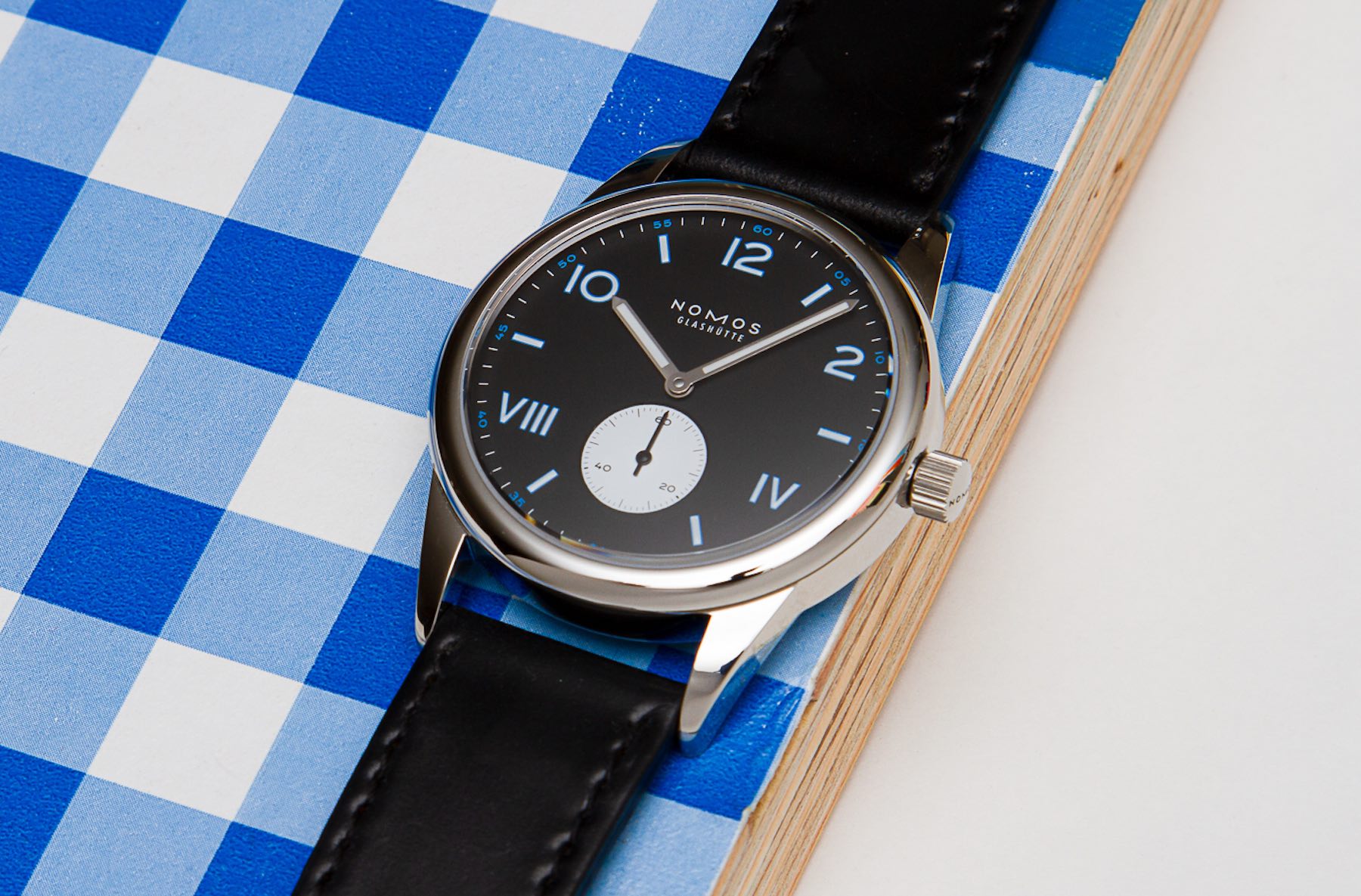 Secondly, during my travels around America training the various NOMOS retailers, I paid a visit to Evansville Indiana. There, I worked with Brinkers Jewelers — a fantastic store, staffed by a raft of passionate people also. There, I met Dean Powell. He too was a fervent fan of NOMOS and dreamed one day of creating his own limited edition for the folks of Indiana. He showed me the renders of his vision. It was the first time I had seen the Club brought to life with black and ice blue on the dial.

If memory serves, it did not have the white sub-dial, and the blue and white of the numerals we see here were flipped, but it switched me on to the potential of this colorway. That image has hung in the back of my mind ever since. Seeing something in that vein brought to life confirmed what a wonderful idea it was… 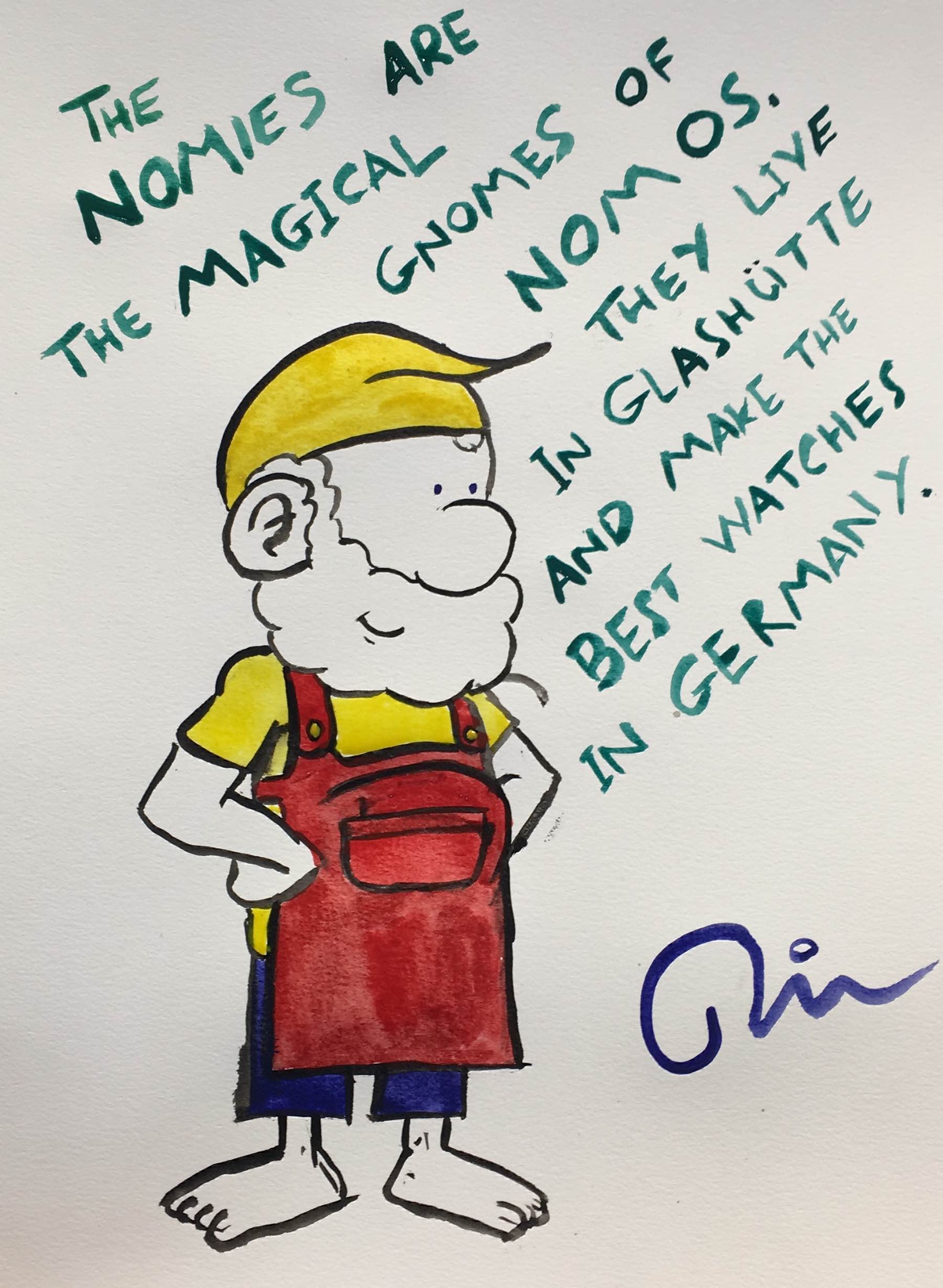 Alon and Dale teased me with a few bits of information prior to this @NomiesForLife model being released. Immediately, I thought of the sketches from Indiana (could be the title of my memoirs…) and I started to get excited. But with that excitement came a drop of trepidation. Would it look as good as I thought it might be able to? When Dale told me that the seconds hand on the sub-dial would be black and not blue as I’d assumed it might, I found myself concerned it would be too stark a visage. I was wrong. 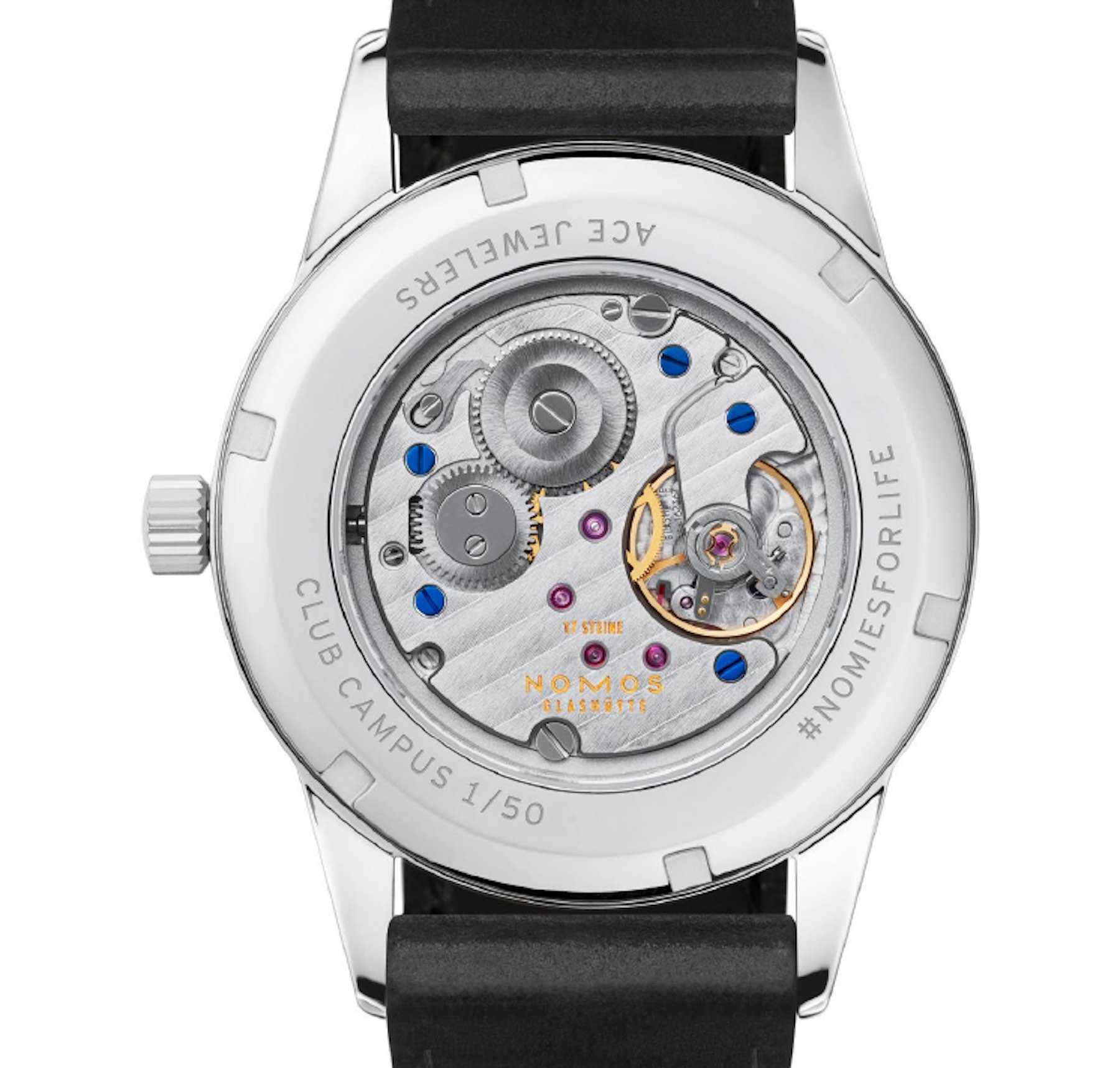 I’m getting pretty good at being wrong. It’s a better skill to master than being good at being right, though, so I’m thankful for the practice (Lord knows, I get enough of it these days). What we have here is a perfectly balanced dial. The colors are deployed with a deft and restrained touch that has the layout of the Club Campus 38 and the wisdom of the designers to thank. The blue is applied in just the right amount. That black hand sitting against the white sub-dial isn’t cold at all. It is smart. When I first saw this watch in real life it made me think of a tuxedo. I don’t know why (I’ve never paired baby blue with a tux), but the thought remains. This is a clean and professional design that has a shot of playfulness courtesy of the blue.

Blue is Michiel’s favorite color. That’s as good a reason as any (and a better one than many) for using it on his dream watch. The black used on this @NomiesForLife Club is a “true black”, as I would say. The previous Club created by NOMOS for Ace used an anthracite dial instead. I must admit, I’d have loved to have seen this flat black used on the Amsterdam model also. Seeing it here in this model only reaffirms that. It just looks so sharp, so crisp, so decisive. 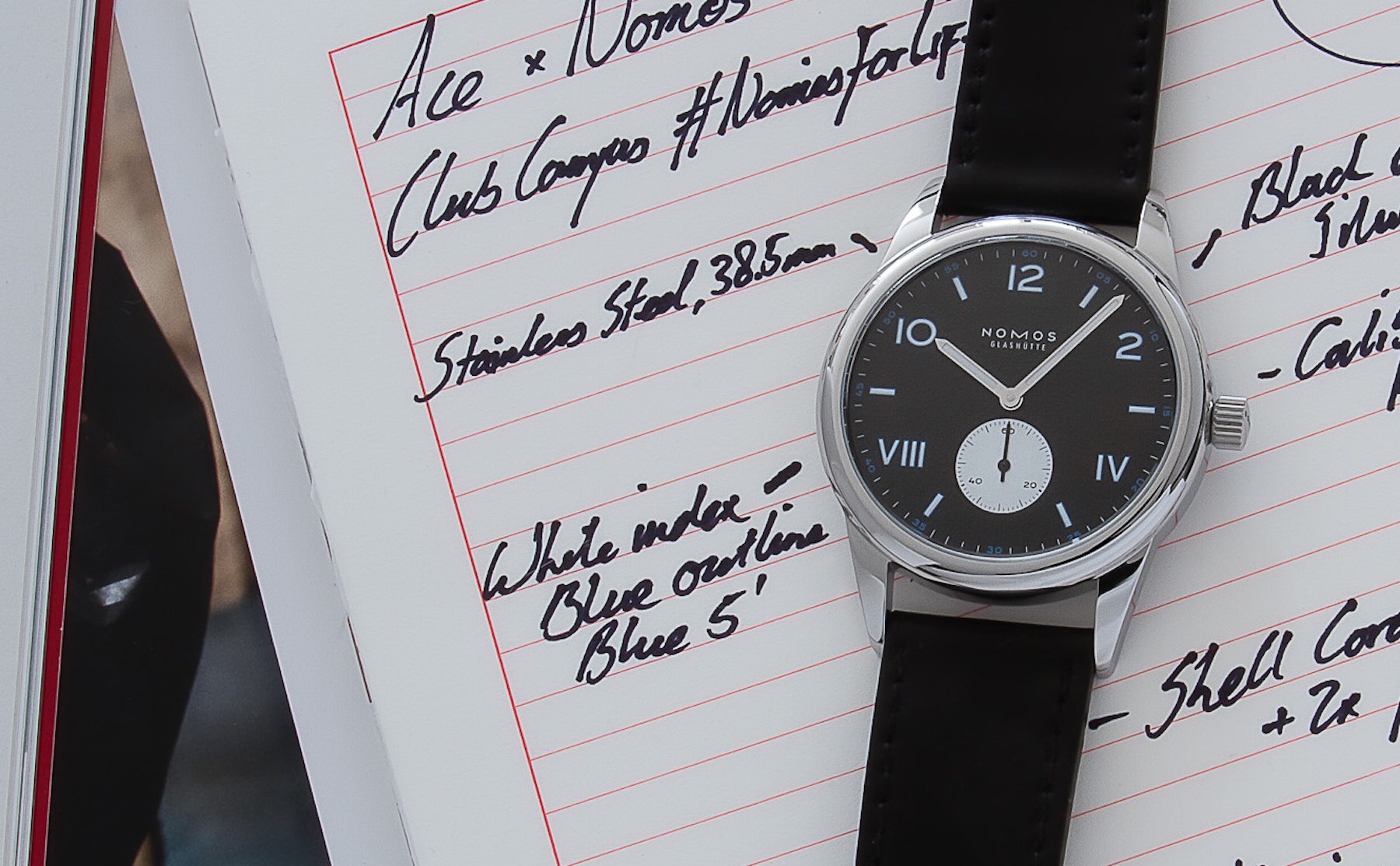 Get your skates on

The worst thing about this watch? It’s only being made 50 times. Several pieces have already been snapped-up by dedicated “Nomies” (a play on the word “Homies” for anyone that wondered what was going on with that handle), so move fast if you want one. As usual, the attractive pricing of the NOMOS Club Campus series makes it a perfect base model for fast-moving limiteds. At just €1,400 incl. VAT I get the feeling we’re going to see one heck of a rapid sell-out. The only question for me? Do I make the @NomiesForLife Limited Edition the third Club Campus in my collection or do I let someone else have some fun at my expense… Learn more about NOMOS Glashütte here. Buy the watch here.