The Fratello × REM Strap For The Speedmaster: The Lunar Lander

Together with the Swedish strap maker REM, led by Totte el Siddig and Roger Clementz, we’re very excited to introduce to you the first Fratello × REM collab for the Moonwatch. Every month in 2023, we will have a different themed strap for the Omega Speedmaster. We designed all of these straps together with REM, and each will be available in a limited run. The first strap for this year is suitable for any Moonwatch. In the following months, however, we will come up with some more specific themed Moonwatch straps. 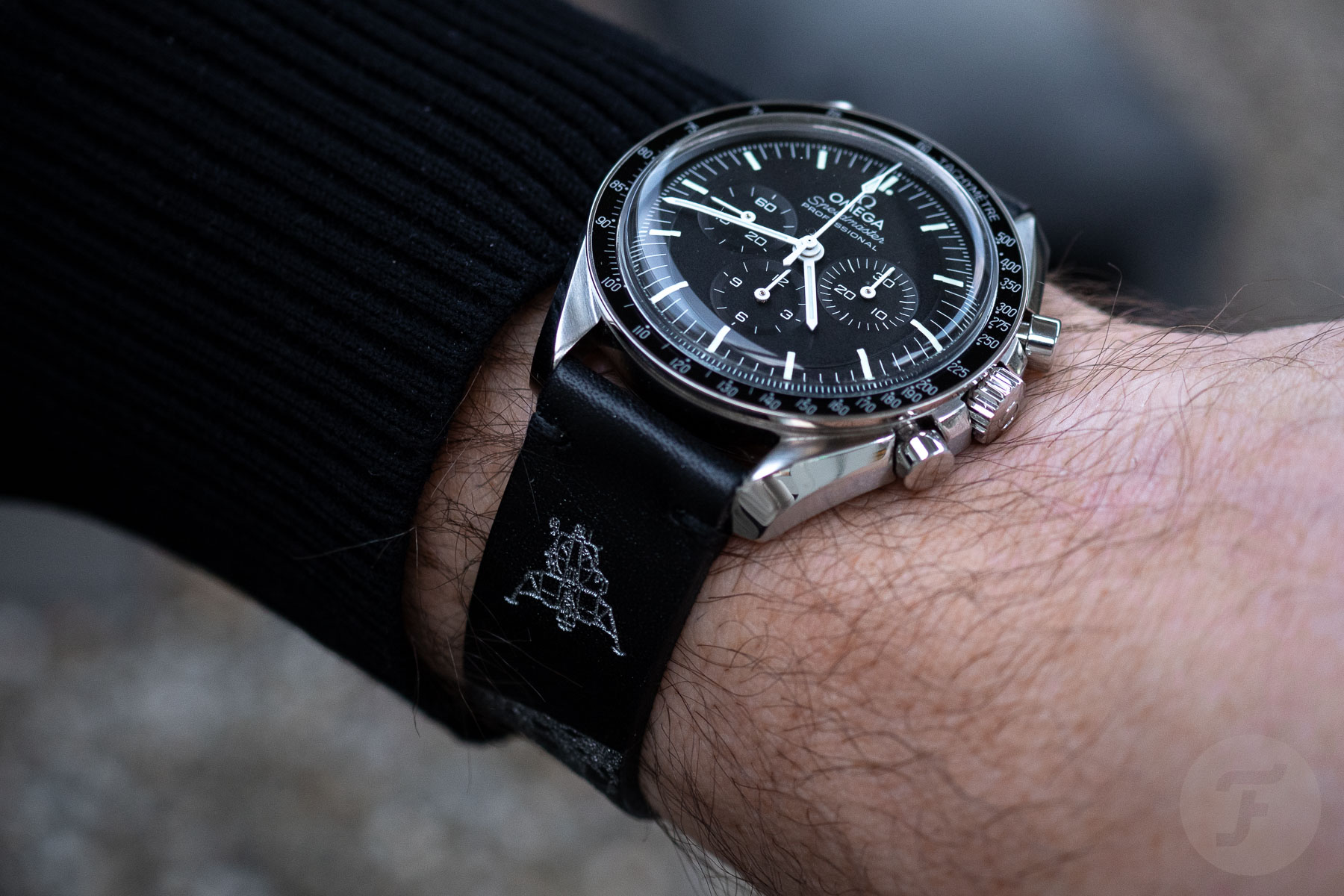 For this January 2023 edition, we thought it would be good to start with something that will suit all Omega Speedmaster Professional models. The black strap with black stitching has a laser-engraved, silver-filled lunar lander on the one side and Earth (as seen from the Moon) on the other side. The Apollo Lunar Module first touched the surface of the Moon on July 20th, 1969. It is also the only lunar lander that has been used for human space flights. Apollo’s lunar lander was used six times from 1969 (Apollo 11) to 1972 (Apollo 17), with the exception of the Apollo 13 mission, of course. 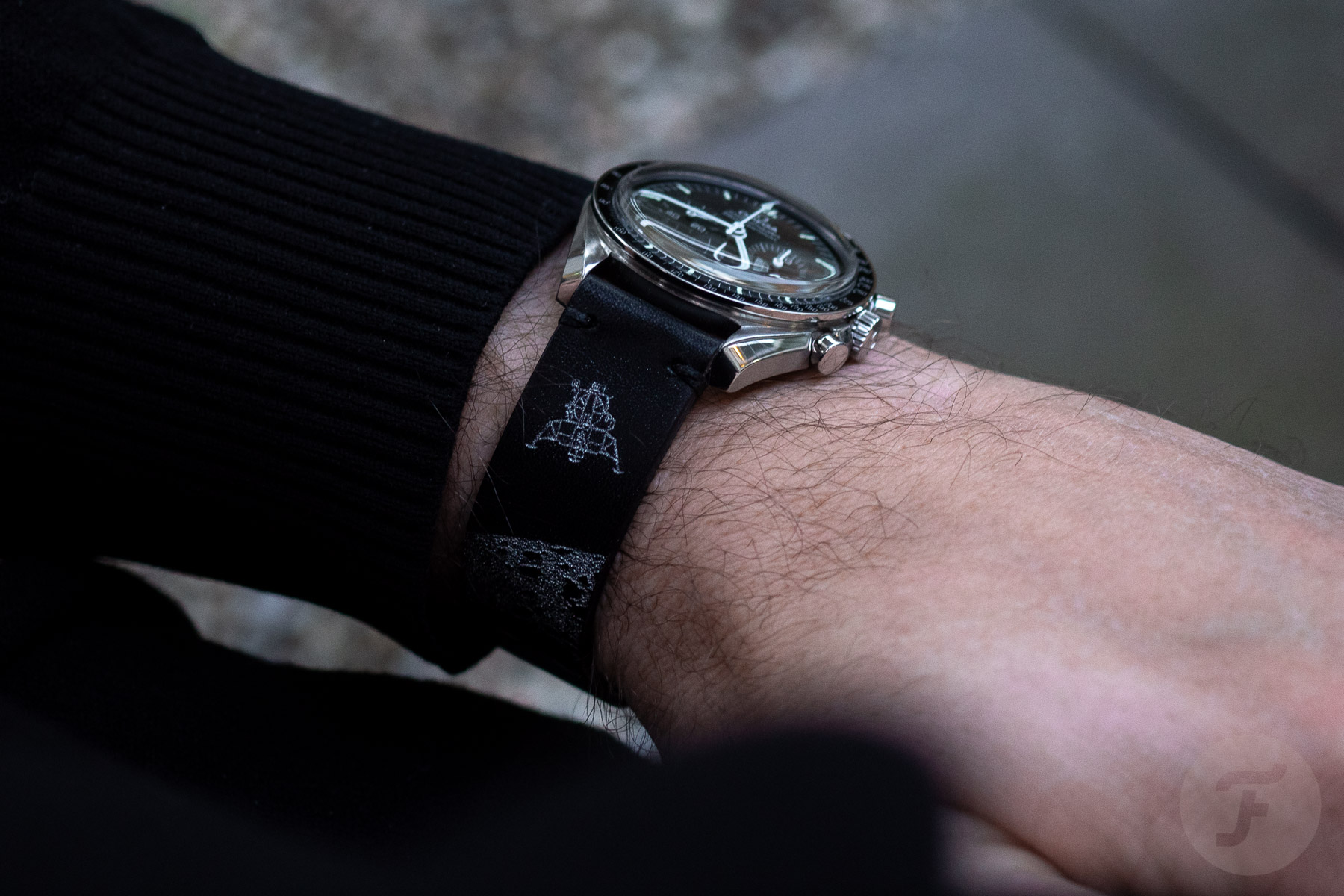 You can find this iconic spacecraft in many images but also as a model, toy, or LEGO set. In 2019, Omega released the Apollo 11 50th Anniversary edition that showed the ladder of the lunar lander with Buzz Aldrin stepping down. The watch holder inside the presentation box of that model also represented the lunar lander. Since the Speedmaster is so linked with the Moon landing and the Apollo program, we thought about designing a 20mm strap with the famous lunar lander on it that would fit every Speedmaster Professional. 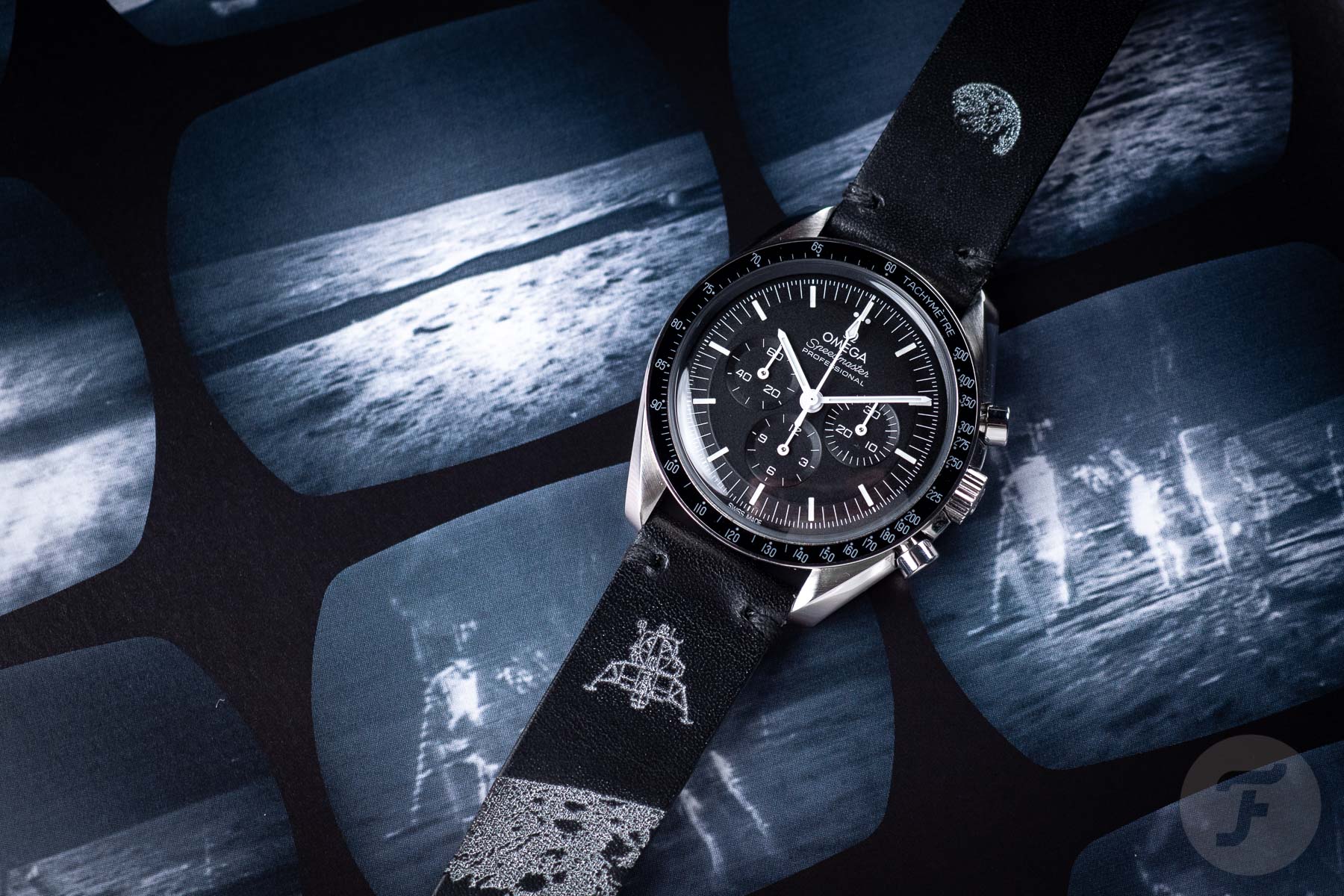 As you can see, the lunar lander is about to touch down on the surface of the Moon, which REM has also engraved on the strap. Not only does the leather come from Sweden, but the tanning, stitching, finishing, and laser engraving also take place there. The Earth, lunar surface, and spacecraft are all laser cut with high precision and then colored by hand. The long part of the strap measures 127mm long, while the short part measures 74mm, excluding the buckle. All straps come with a Fratello-signed pin buckle. 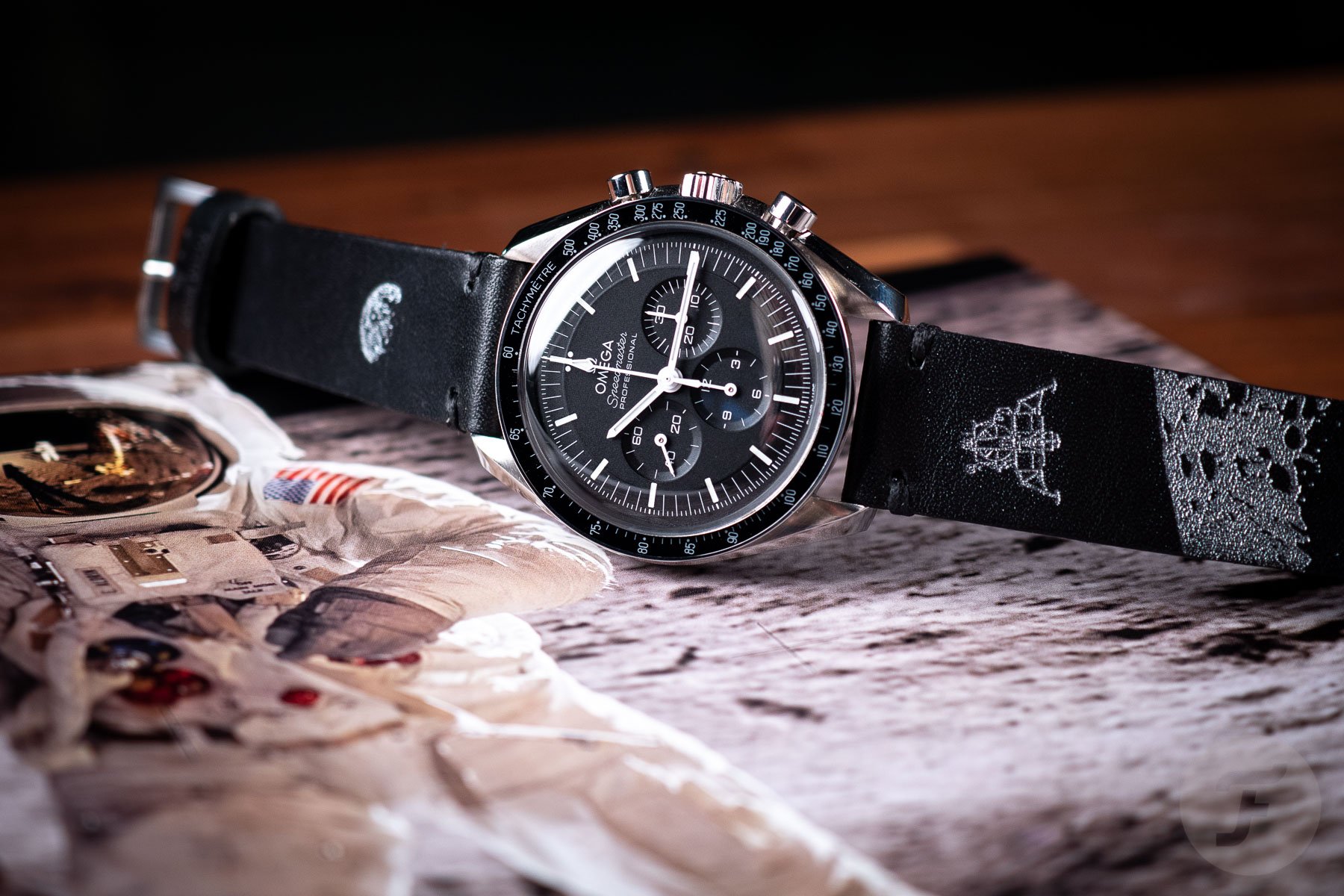 The organic leather strap wears comfortably on the wrist, and we think the black and silver colors suit the regular Omega Speedmaster Professional Moonwatch very well. We chose the black ton-sur-ton stitching to keep the focus on the watch but also on the beautiful laser-engraved Moon landing scene. 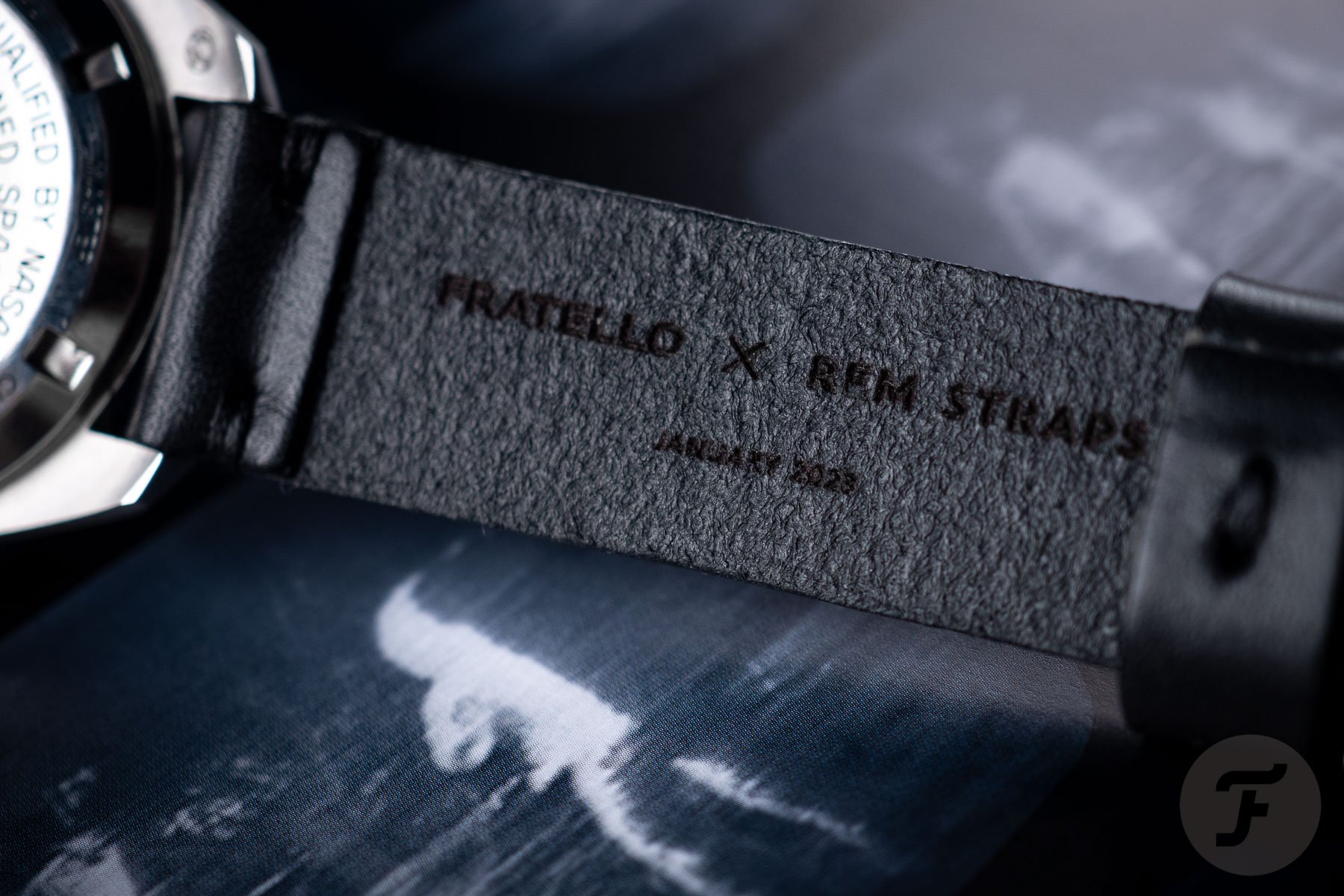 Every strap has “Fratello × REM Straps” and “January 2023” engraved in the lining. As mentioned, together with REM Straps, we will introduce a new leather strap for a Speedmaster every month this year. Therefore, you can expect to see a strap specifically made for the Snoopy, the Speedy Tuesday models, the FOiS, and so on. The January 2023 Lunar Lander strap is available in one length only and exclusively as a 20mm strap. For the smaller Speedmaster models, such as the FOis and Calibre 321, we will use a 19mm size. 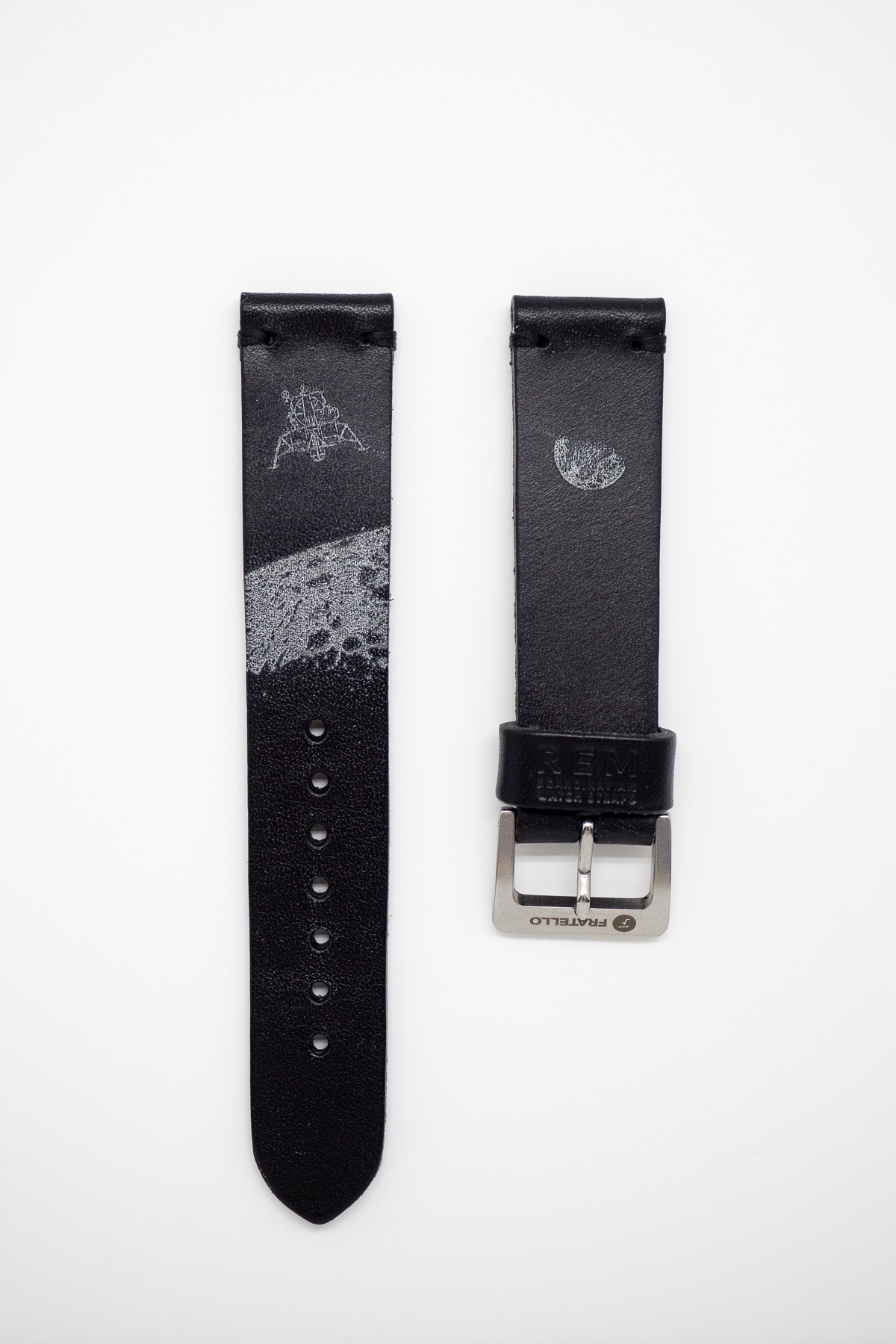 As you know, the Omega Speedmaster is a strap monster. You can easily change the appearance of the Moonwatch with a different strap, even just for some temporary fun. Each month, we will have a new design with new colors. Though we’ll design these with specific Speedmasters in mind, the straps might also work on other models as well. 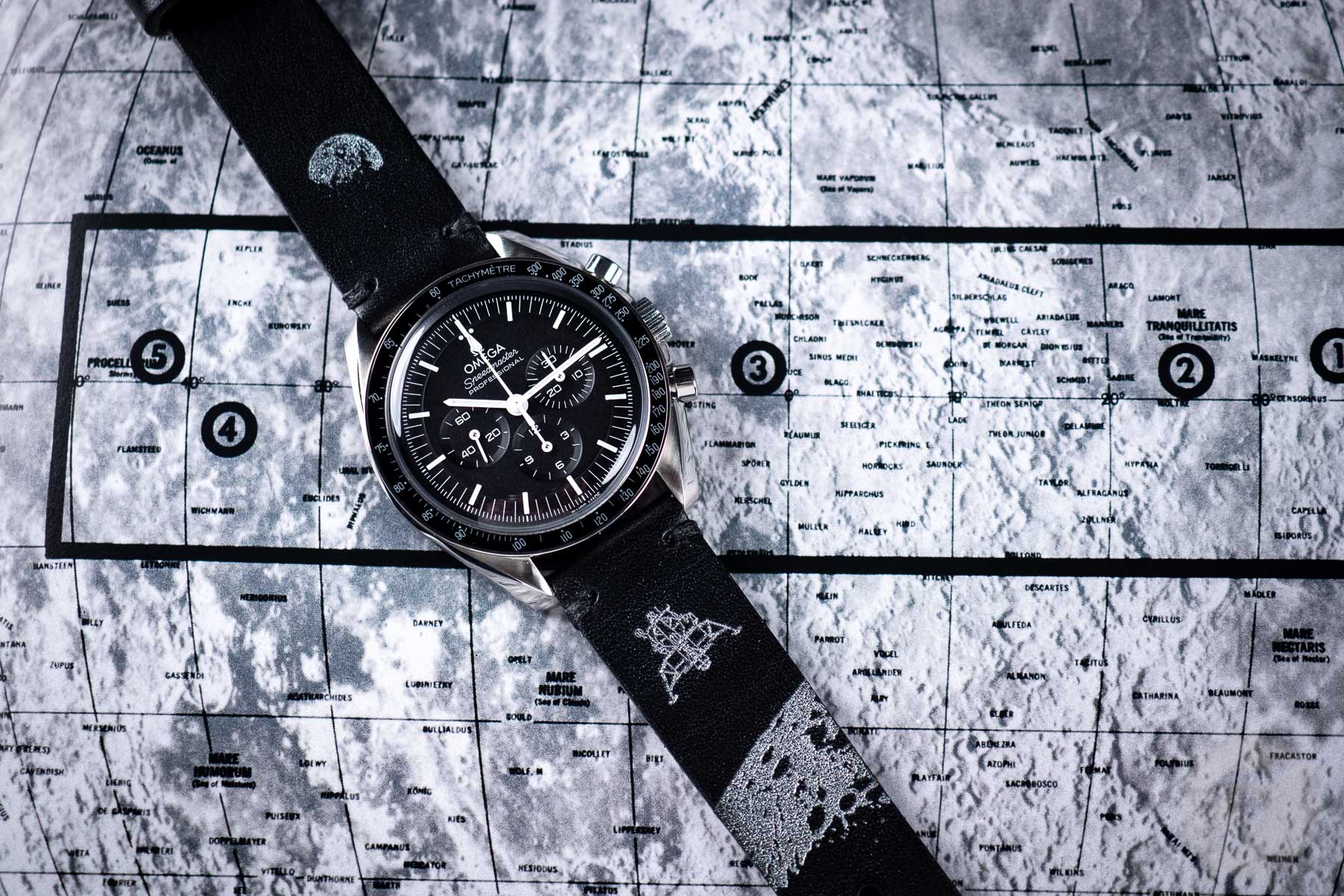 The Lunar Lander strap is now available for €129 (€106 excluding VAT) in the Fratello Shop. The strap qualifies for free worldwide shipping as well. Let us know what you think of this strap and our ongoing project with REM Straps in the comments below!