A Visit To The Officine Panerai Manufacture In Neuchâtel

A few weeks ago, we were invited to visit the Officine Panerai Manufacture in Neuchâtel. This manufacture was opened in 2014, but only few media have been invited to have a look in the actual production facility. Officine Panerai has a total of 600 employees world wide, of which 260 are located in this new manufacture in Neuchâtel. The Panerai Manufacture is a large building, offering 10.000 square meters for the production of a number of their in-house developed calibers. 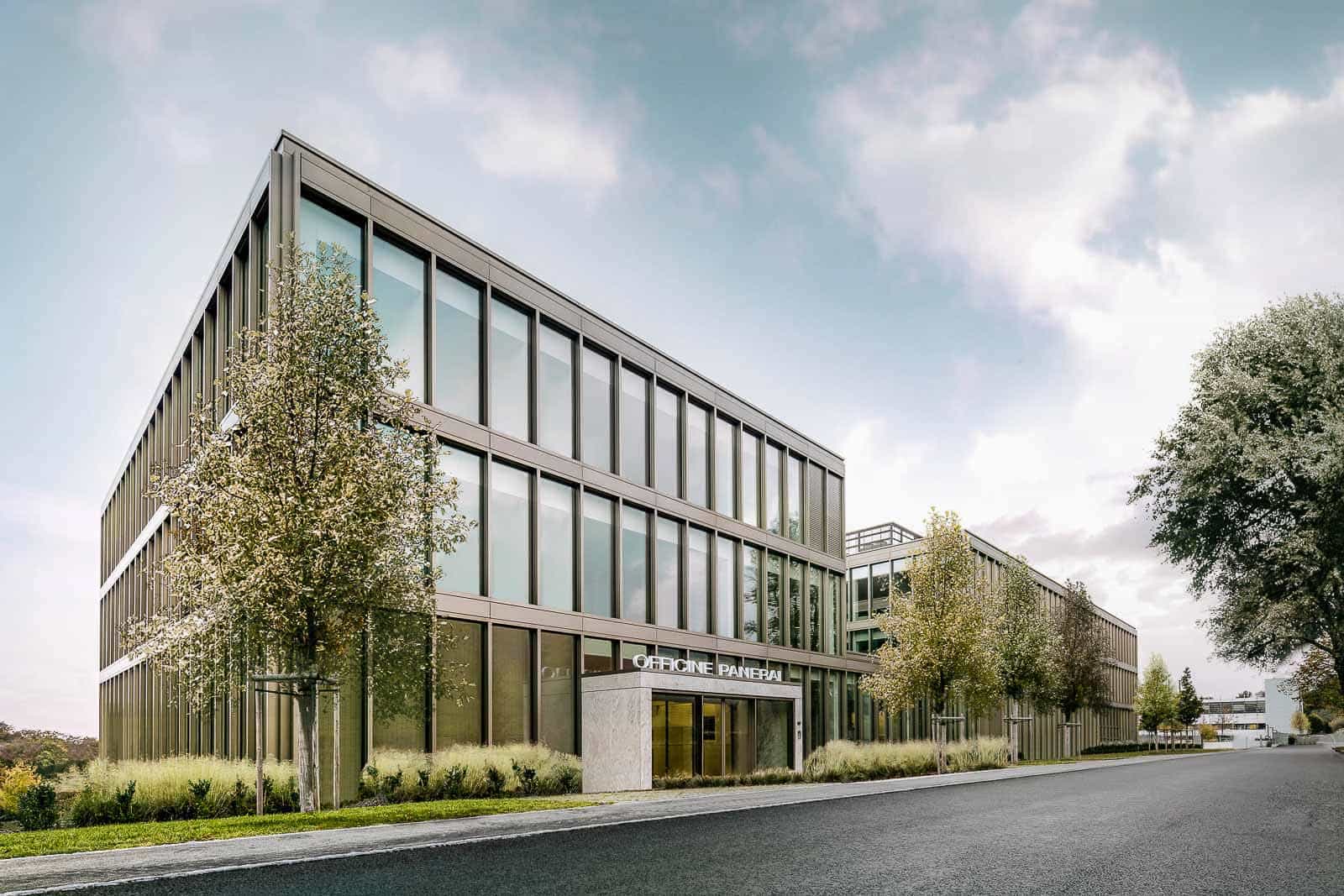 Before I continue my visitor’s report of the Panerai Manufacture, I have to admit that I was a bit sceptic at first. Sure, Officine Panerai has been making in-house movements since 2005. But to me, in my perception at least, a Panerai is mainly about aesthetics, which is not a bad thing per se. I had a couple of Panerai watches myself and loved them (but you know how it goes, sometimes you trade a couple of watches), also for their quality. I did not realize how much Panerai puts into testing their watches to the extreme, until I visited Neuchâtel recently.

Since Panerai started to develop their own in-house movements (since 2005), they created 25 different calibers. These caliber families (P100x, P200X, P300x, P400X, P500X, P9x0X) consist of hand-wound and self-winding movements, some with only a small change or different complication. However, still, it is quite impressive for them to have 25 in-house calibers, besides the movements they still use from third party suppliers (such as ETA/Unitas). Although being a sports watch at heart, their movements range from time-only to complications like a regatta timer or tourbillon. 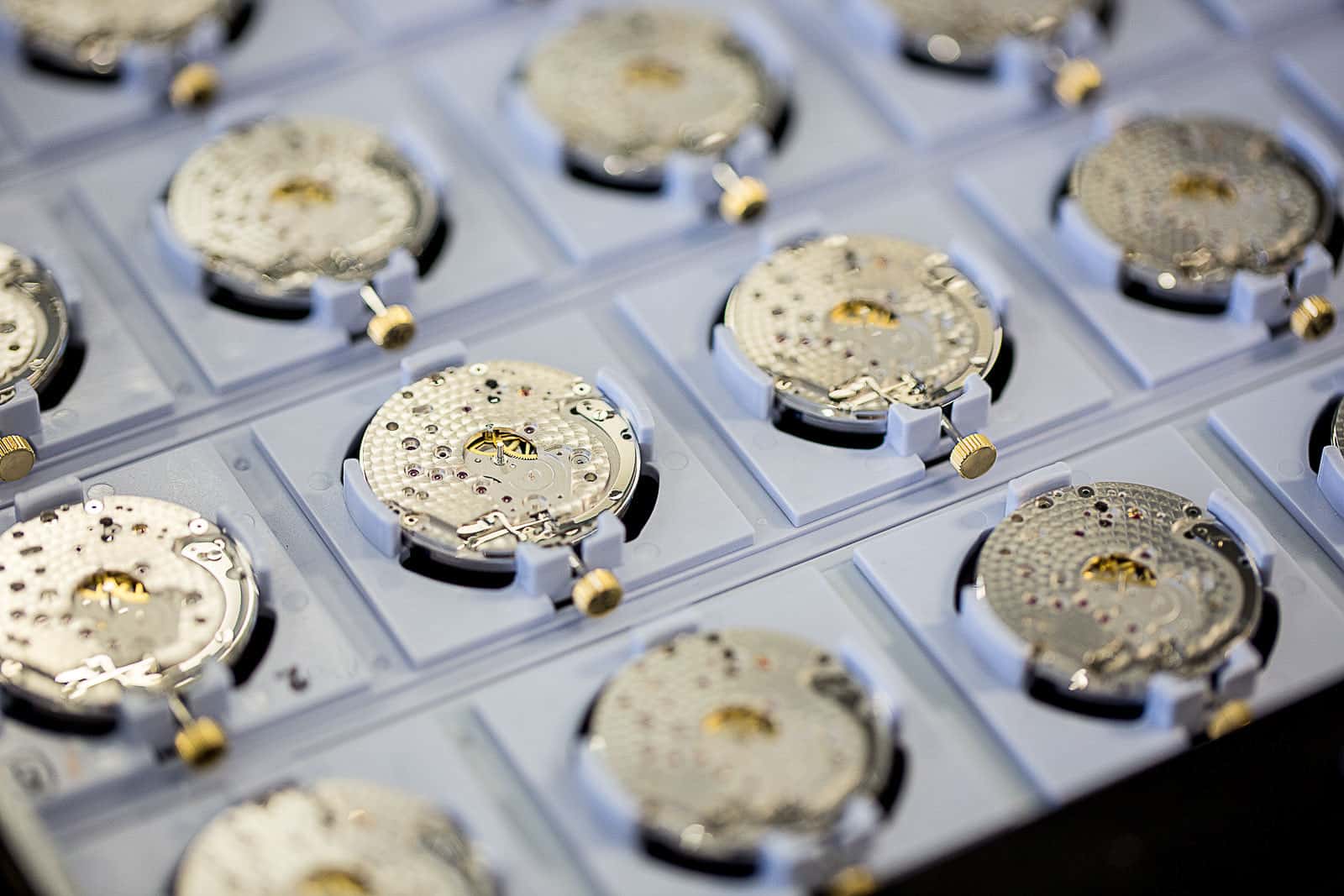 After receiving an overview of Officine Panerai’s history and a global introduction, we started our tour through the Panerai Manufacture. The first stop was the department where concepts are being created and turned into a prototype, the R&D department or Laboratorio di Idee (workshop of ideas).

With a team of approximately 45 persons, this department goes through the following steps:

Not all steps are being executed by this department, but are initiated from there. This is an interesting department, as it includes a lot of major steps in the creation of a watch. One of the coolest aspects – in my opinion – was the research for new materials, including experiments and running tests. Panerai showed us a couple of prototypes made of different materials, stuff that never went into production and things that were covered by a cloth that probably will see the stage at SIHH in 2017.

No Marketing On Performance And Quality

As I wrote above, the fact that Officine Panerai puts a lot of effort in putting their watches to the extreme with test activities surprised me. I wondered why they do not actively use this for their advertising / marketing campaigns. For instance, Panerai performs tests on shock resistance, drop test, anti-magnetism, water resistance, fogging and of course accuracy. Quite a bit of rugged tests (60-80!) which can not be disclosed here. After questioning why they don’t use this as ‘selling point’, they told me that reliability of their watches is certainly important, but it is something that customers should rely on. Not something to explain in advertisements. I am not sure whether I would agree to this, as I feel it is important to customers to actually show why your watches are quality timepieces. However, it was good to see that Panerai takes the reliability and accuracy of their watches dead serious. We were all quite surprised – in a good way – to see that they put so much effort into that.

The production facility of the movements happens on the ground floor of the Panerai Manufacture. About 800 square meters are reserved for high-tech machines that take raw materials and turn them into a movement plate, bridge and other components. The movement plates are made of a copper zinc alloy and take up to 1 hour per piece. No pictures were allowed, as some of these machines were especially developed for the Panerai Manufacture in Neuchâtel. A pity, but on the other hand, they did show everything to us to ensure how serious they take their manufacturing process. 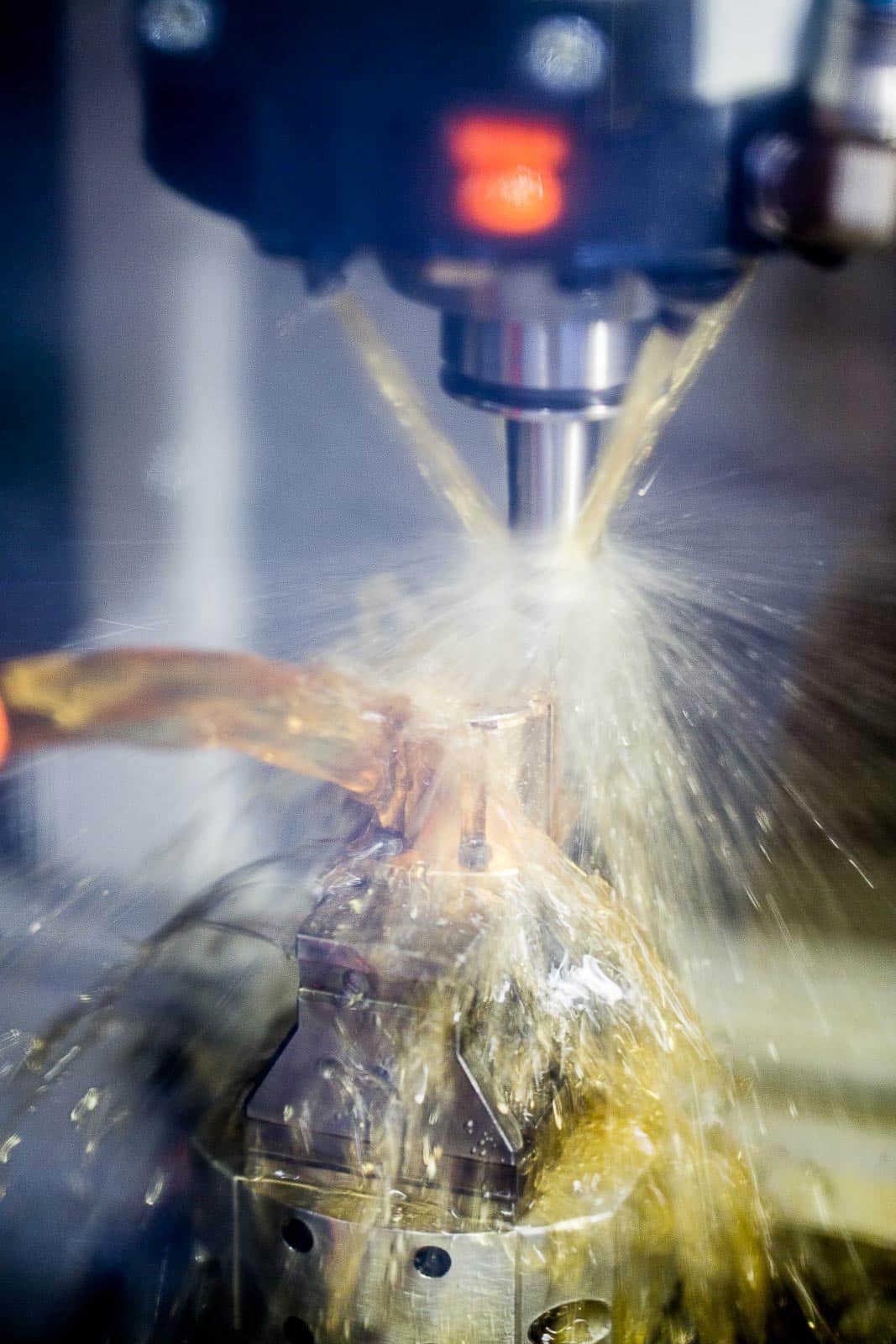 Another interesting activity we were shown in the Panerai Manufacture was the finishing of movements, done by machines. A machine, developed together with a university in the area, is able to apply satin finishing to the Panerai movements that are being manufactured on this location. A batch of movements is being moved over very fine ‘sand paper’ to apply the satin finish. Another machine took care of applying perlage finish to the movements. 24 movements at the time! Normally, from what I’ve seen at other manufactures, there is more manual work involved by staff. I am not entirely sure how I feel about this, as I like the fact that people actually work on the finishing of the movement, instead of machines. On the other hand, if Panerai is able to keep their prices reasonable for a nicely finished mechanical movement, it does make sense. 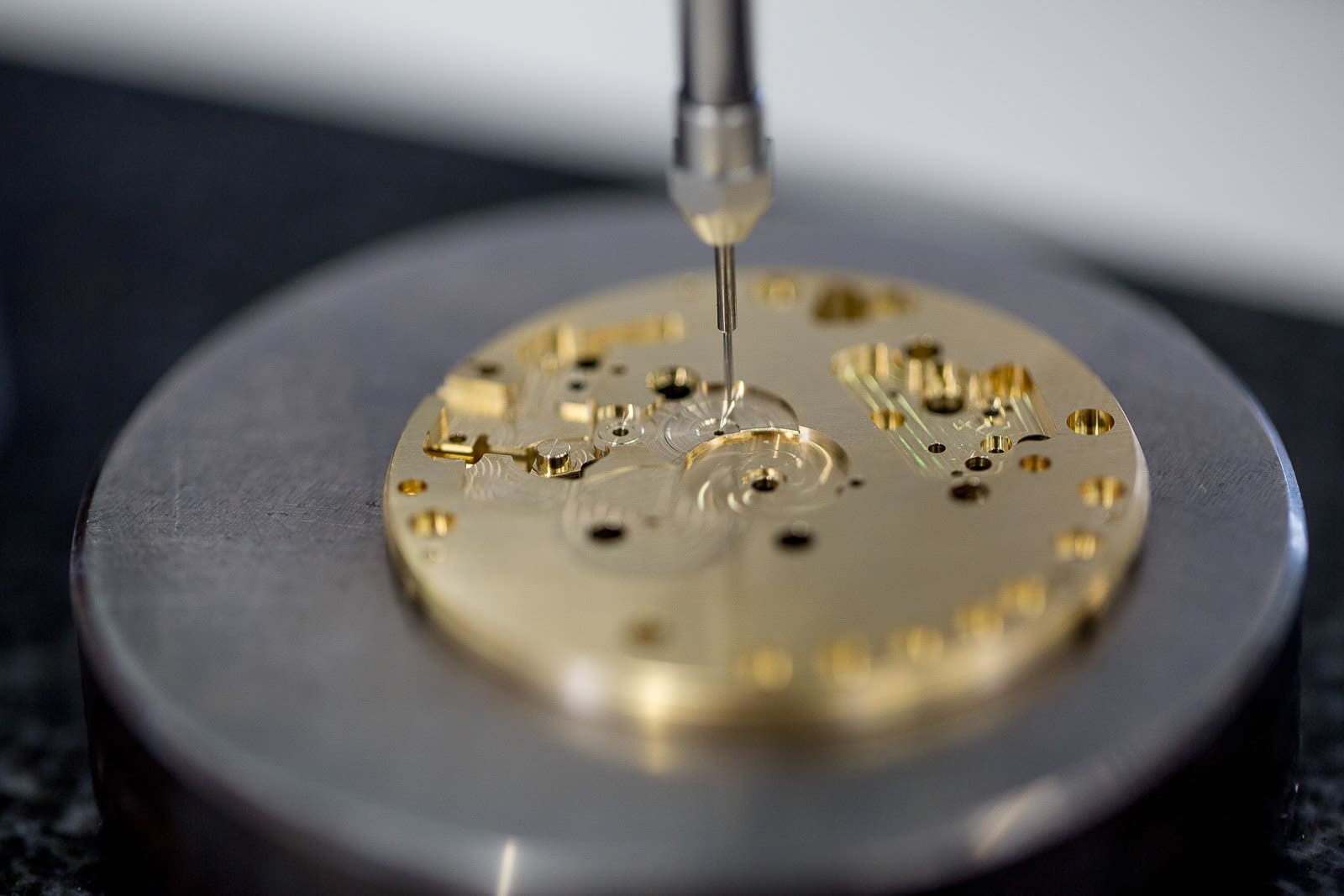 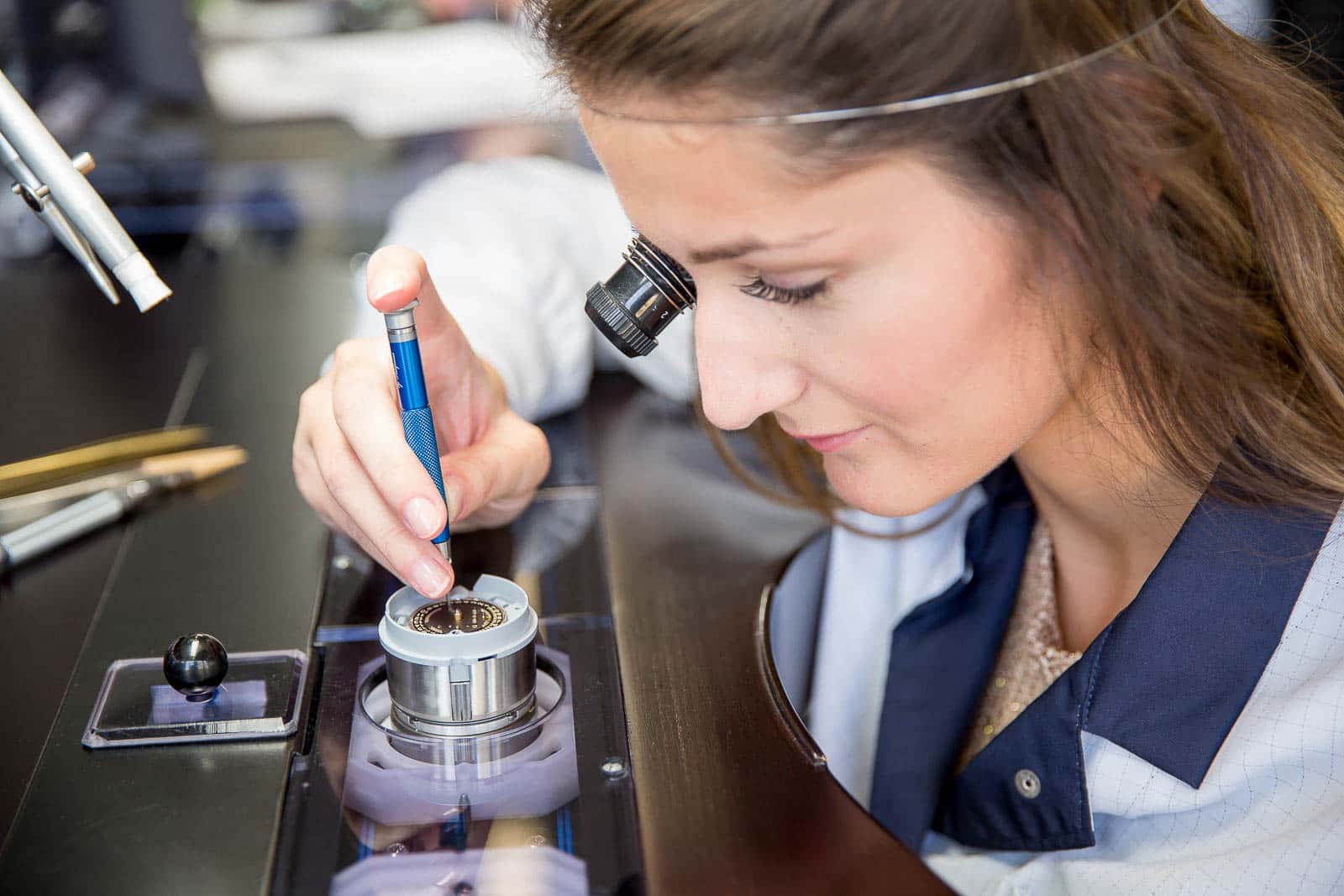 Another department, on a different floor, was that of the assembly of the watches and the quality control. Very impressive was the large juke-box like equipment that puts the movements to several different tests, to simulate actual wearing and to monitor the accuracy of them. 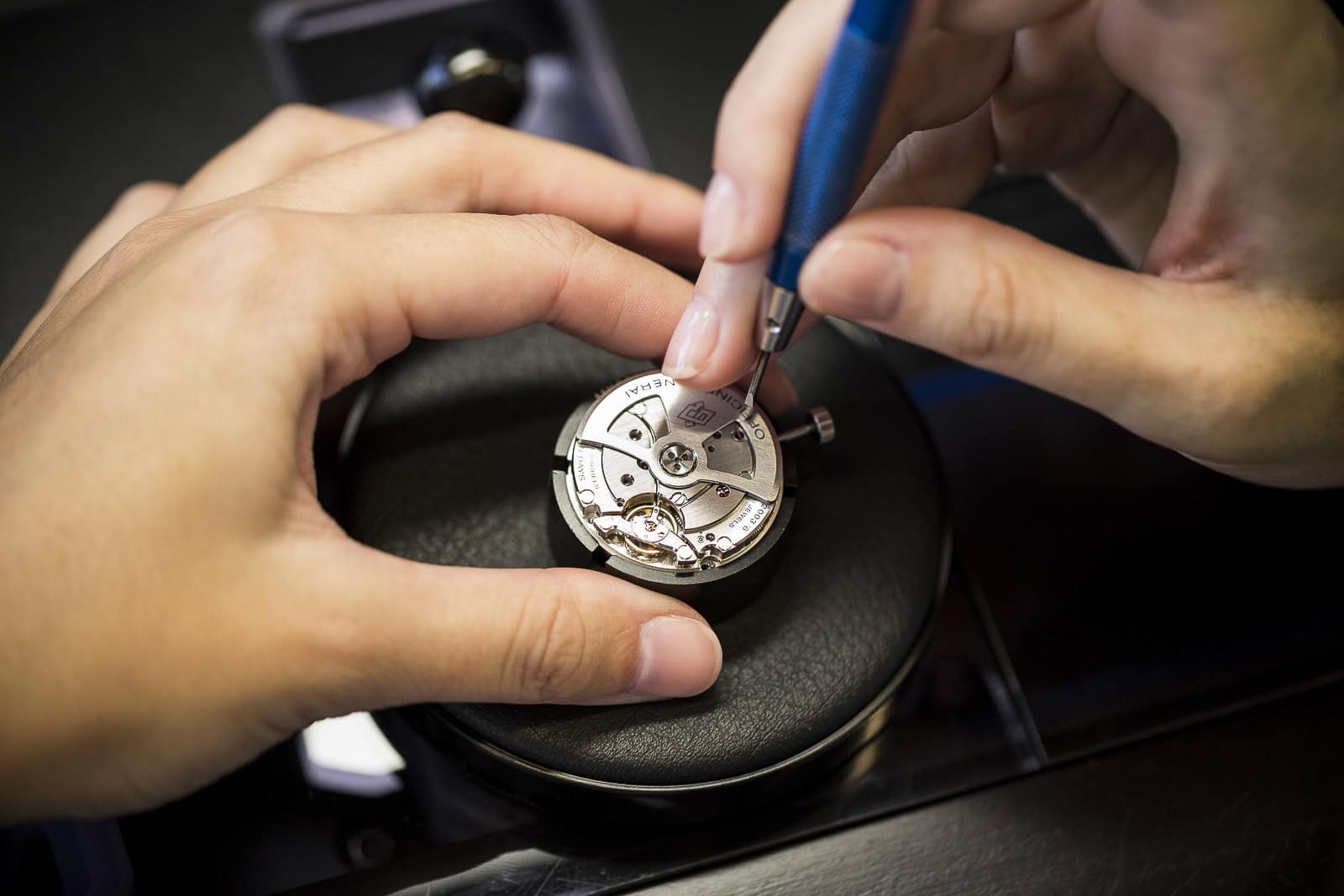 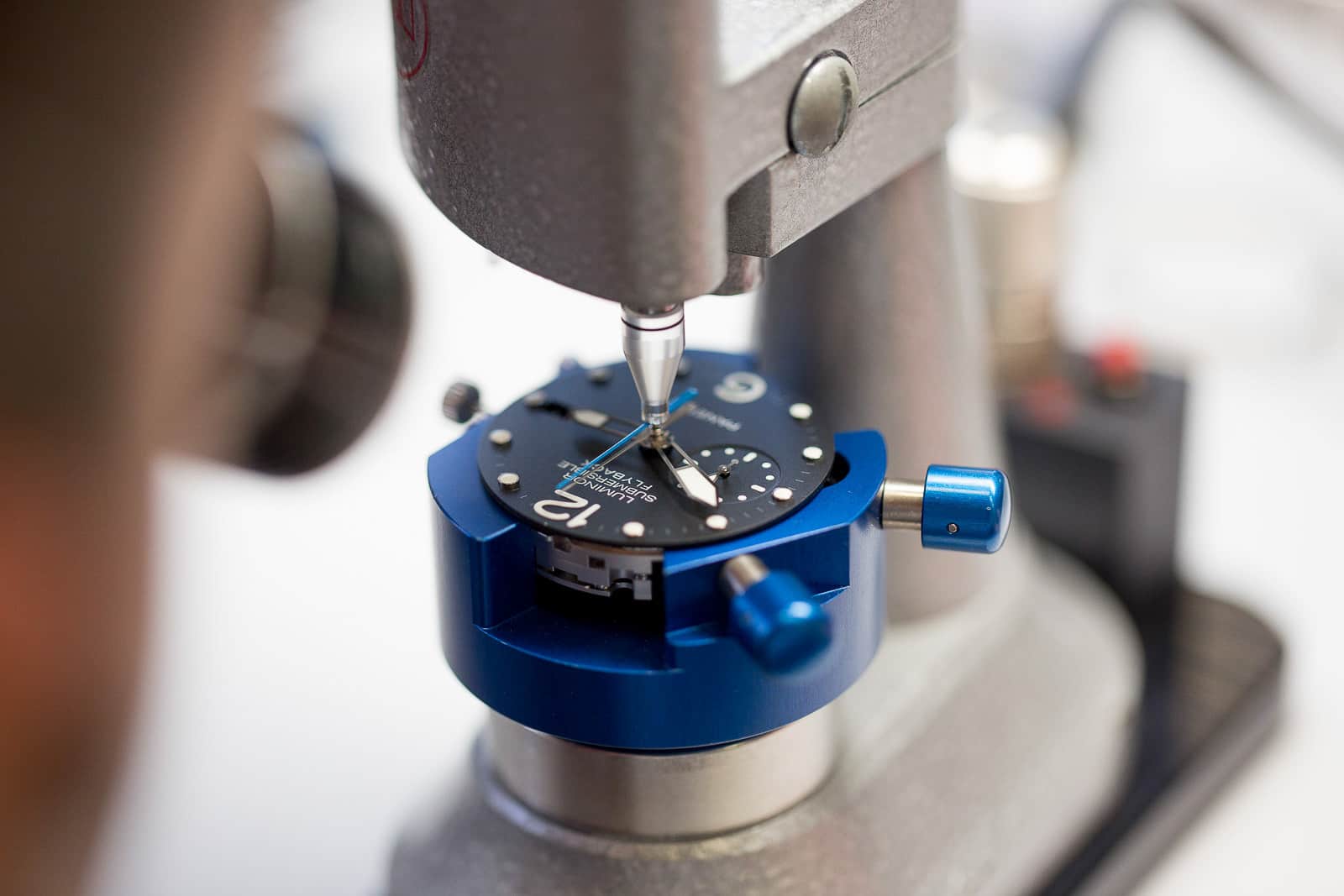 The assembly takes place by skilled staff, that takes care that every part is in perfect condition and working order. After movements are cased, dial and hands are added and so on, the watches are being checked once more for water resistance for example. All Panerai watches must have a water resistance 25% higher than the officially declared limits, from a minimum of 3 bar to a maximum of 250 bar in the case of certain Submersible models. 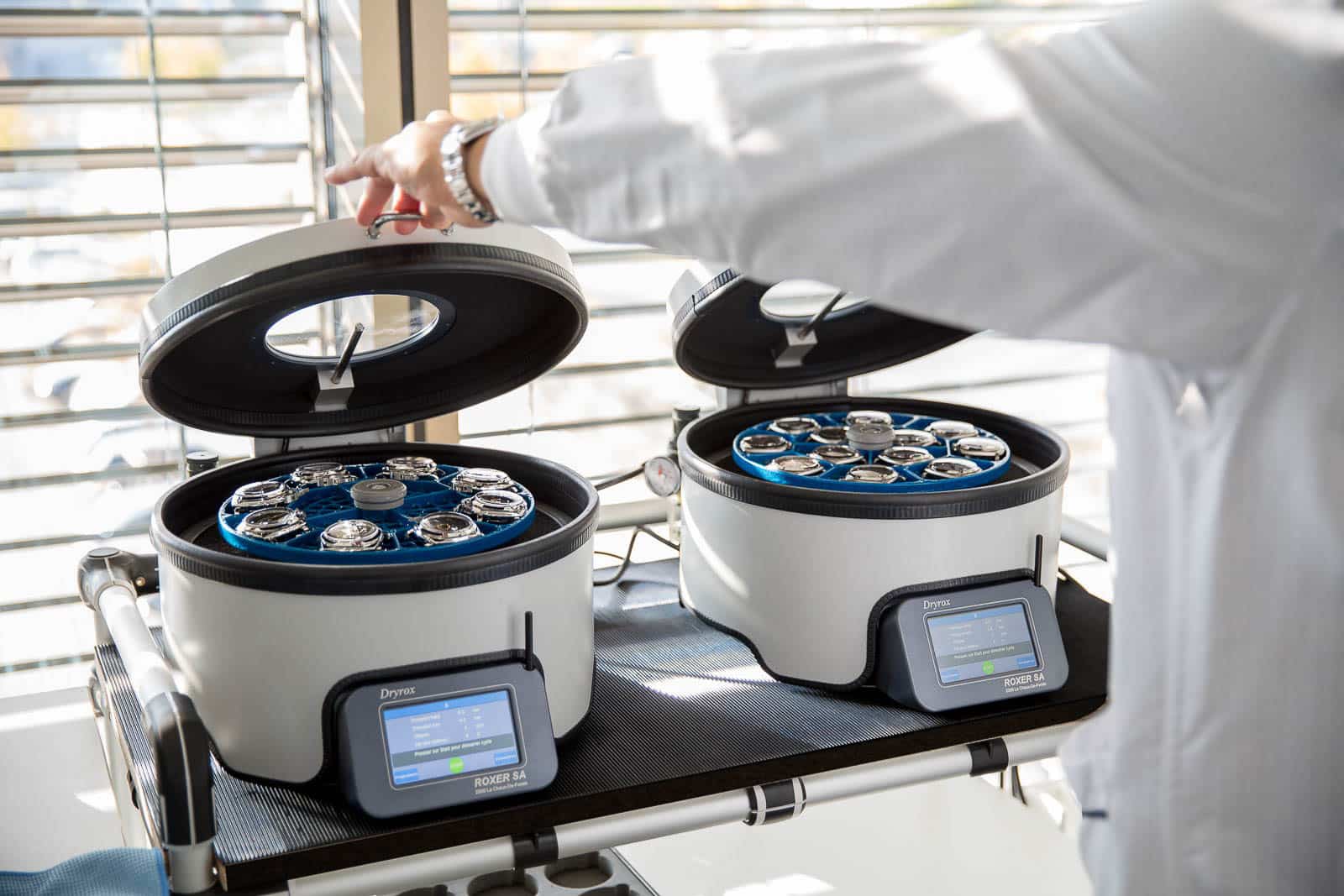 At later stage, the straps or bracelets are being attached to the Panerai watches and checked once more for imperfections. When an imperfection is encountered, watches are being send back into the production process.

We also paid a short visit to the after sales department. A group of watchmakers take care of the watches from clients. As these watches are not owned by Panerai, the security measurements regarding these watches was very high. Closed moveable cupboard with electronic locks are moved into a larger locked environment, safe guarded by other security measurements (like security staff doing the lock-ups every end of day). Just to be sure nothing happens to the watches of their clients. 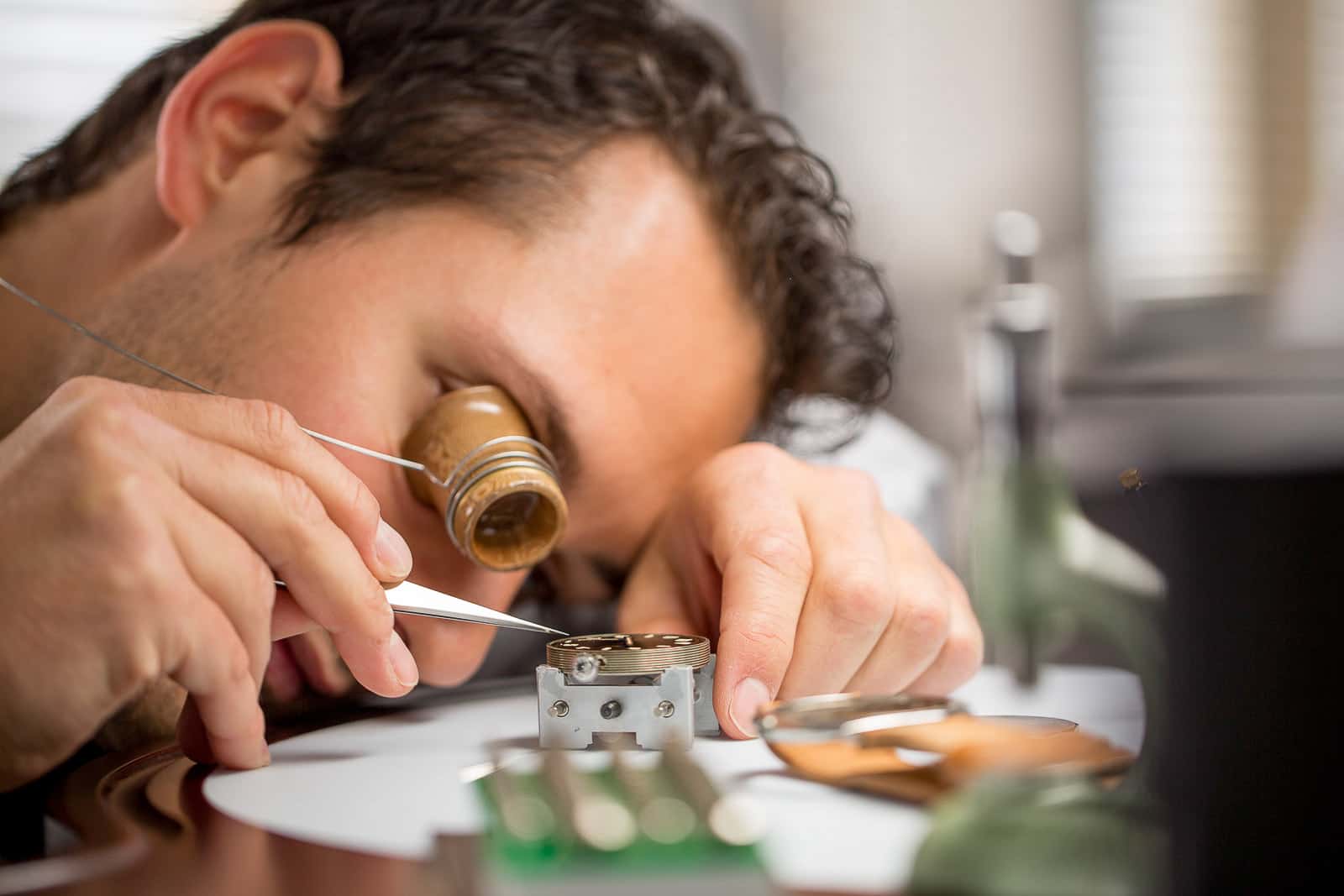 Vintage watches can also be serviced and restored in this department. Depending on the parts needed, it can take a while, but everything is being done to keep the watch authentic and original. It was an impressive short visit, especially to see how seriously they take their heritage pieces. 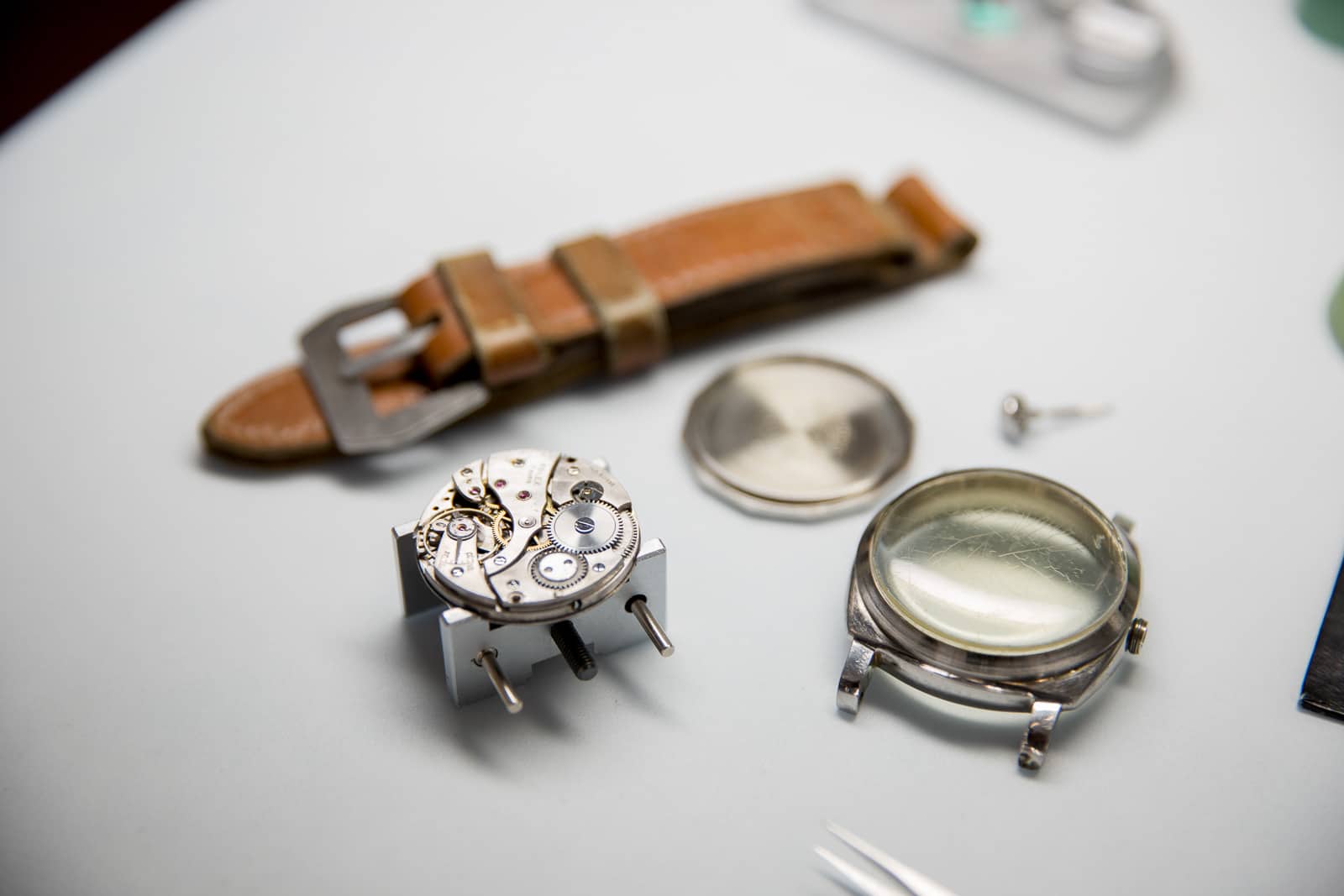 The last department we visited during our tour is the one that takes care of Panerai’s haute horlogerie pieces. As you know, Panerai also created watches with a tourbillon or minute repeater movement for example. Still in the style of the Panerai diving / military watch, but with an exceptional movement. 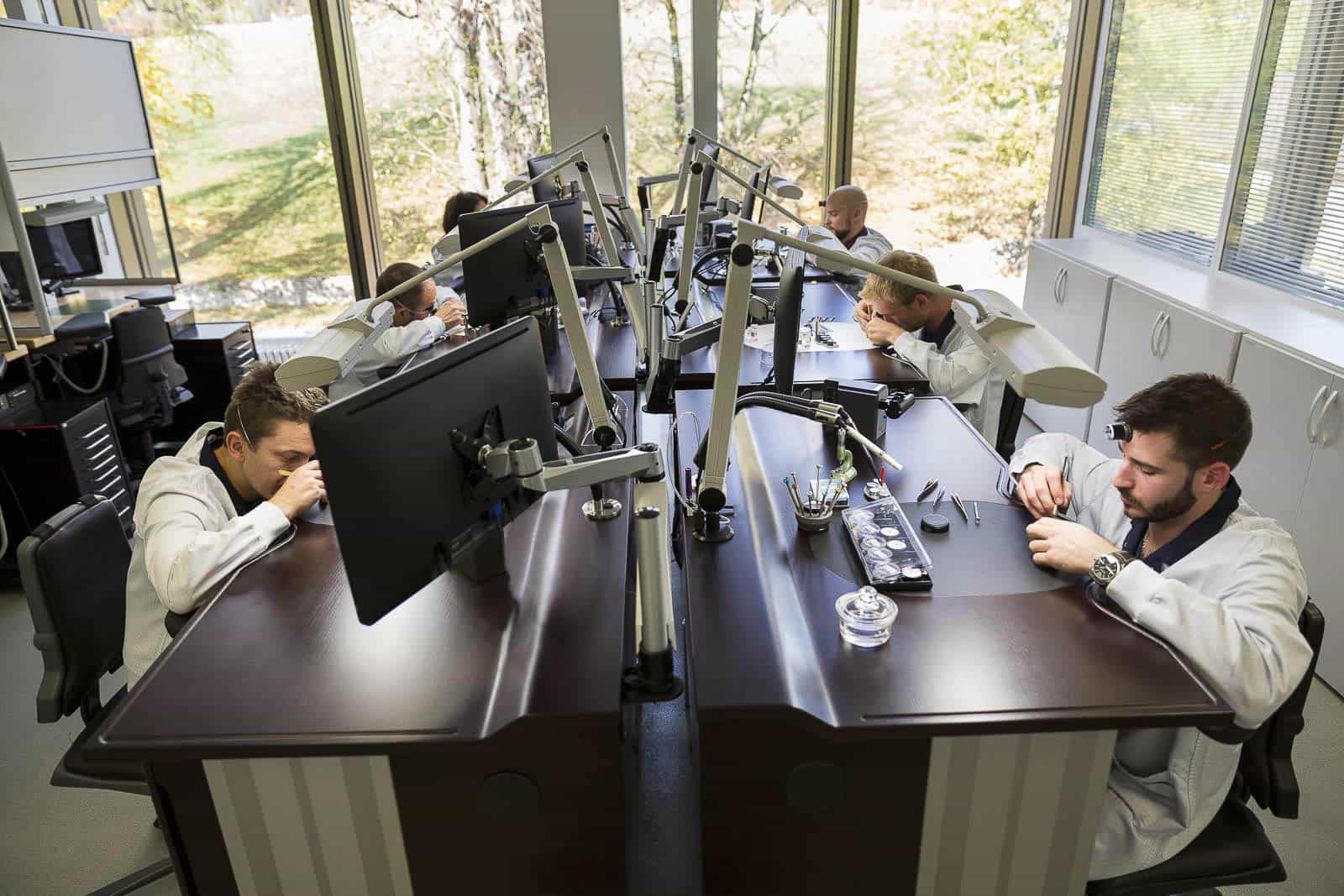 Again, no pictures could be taken, as some movements and watches were either not to be shown to the public (yet). However, the passion for high-end watchmaking was definitely something we could sense among these highly skilled and trained staff members. I asked about the ‘typical’ customer for these high-end pieces from Panerai, whether a buyer for their minute repeater is simply a fortunate Panerai collector or whether it is someone who collects minute repeaters or tourbillons from all sorts of brands. As far as our guide could tell us, it is a bit of both, but when it comes to the minute repeater it often seems to be a case of love for this specific complication. 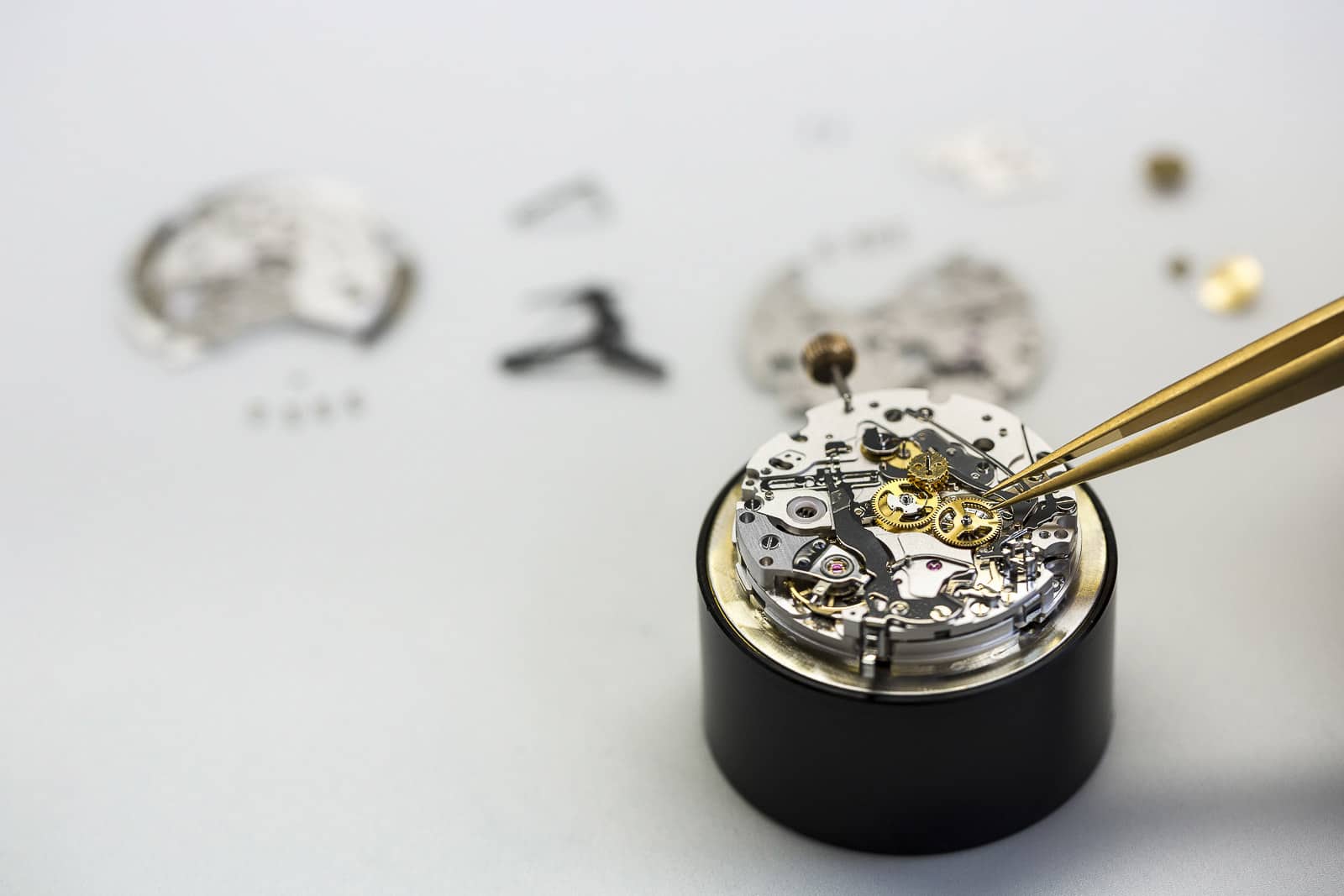 To me, Panerai is a brand that creates watches that need to be in a certain framework. There’s the Luminor, Radiomir and the Submersible. Today we also have the Due timepiece, which is a more dressy version of the Luminor. These are basically the models that Panerai has to work with. It is impressive how Panerai can still surprise us with new models that offer something unique and special, without losing touch with the design code and ‘core values’ of the brand. Having been to the manufacture in Neuchâtel, I have to say that my respect and interest for Panerai only further increased. The level of craftsmanship, engineering and eye for detail is amazing. Even though some of the typical watchmaking skills regarding finishing have been taken over by cleverly engineered machines, I can only applaud this for the sake of being cost effective and keeping quality standards high. The high-end movements are still finished by hand, of course. 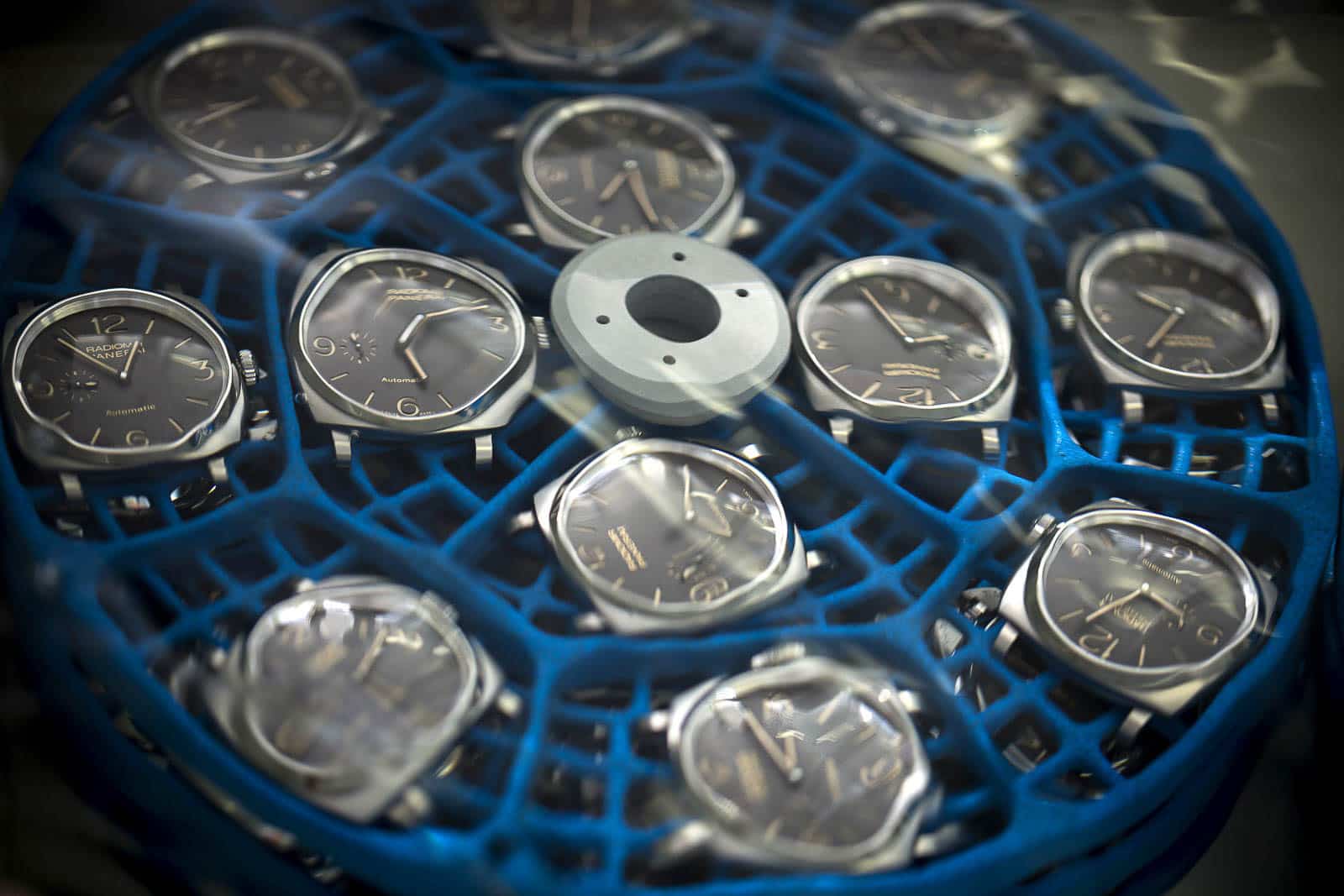 What leaves me a bit puzzled is why Panerai isn’t more open and clear about their (high) level of engineering, test work and quality controls. It would be such an interesting subject for their marketing and advertisement campaigns, yet they choose to focus more on their (navy) heritage. I am not a marketeer so what do I know, but for me personally a brand has an advantage when they can show me why their watches are supposed to be good. Perhaps that’s the German in me.