To our surprise, Jean Claude Monachon (Head of Product Development) of OMEGA showed us not only the new Speedmaster 9300 line-up (Dark Side of the Moon and ’57 editions) and Aqua Terra 15.000 Gauss, but also a new OMEGA Seamaster Bullhead. If you are following us on instagram, you probably have seen our quick snaps of these watches already. However, here are the pictures we took during the presentation with a decent camera.

OMEGA Speedmaster 9300 Dark Side Of The Moon

There was already some buzzin’ around just before Baselworld, perhaps OMEGA did that on purpose, perhaps not. The new caliber 9300 Speedmaster Dark Side of the Moon is made out of one block of ceramics. Actually, OMEGA considered the use of PVD and DLC techniques as well, but they didn’t accomplish it in such way, that it was up to their level of quality standards. In fact, Jean Claude Monachon has always been searching for a way to create a black Speedmaster since he joined OMEGA about 16 years ago. The use of ceramics was jack pot for them, after a special OMEGA task force was occupied by this project for quite a while. 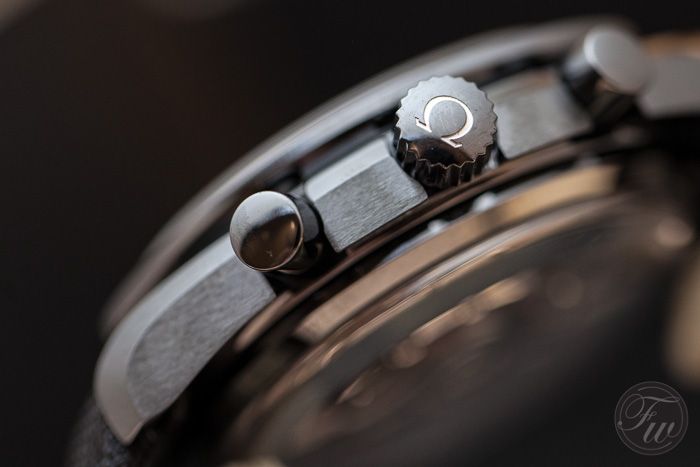 With the Speedmaster 9300 ’57 edition, OMEGA wanted to pay tribute to the original Speedmaster Broad Arrow model from 1957, the reference CK2915. This ’57 edition will become available in various versions; in stainless steel, titanium and in gold. The white dial version is the model that is being made out of titanium. This Ti model with leather strap will have a 8,900 Swiss Francs price tag (excluding VAT). Add 600 Swiss Francs for a titanium bracelet.

The model we love best is the stainless steel ’57 edition, with straight lugs (so the diameter is a tad bit smaller) and a beautiful black/grey-ish dial. The bracelet is quite flat with a polished center link, inspired by those original Speedmaster bracelets from the 1950s (ref.7077) and 1960s (ref.1039). Price for the stainless steel ’57 edition is 7500 Swiss Francs, excluding VAT.

We are a huge fan of the Speedmaster 9300, as you can read here and here. This year, OMEGA introduces this ‘standard’ Speedmaster 9300 in titanium with a blue dial and a blue ceramic bezel. Price will be 9,500 Swiss Francs excluding VAT.

A nice surprise this year for us is the revival of the famous Seamaster Bullhead. The vintage 1970s Seamaster Bullhead is fetching crazy prices in the collector’s market, but there’s now also one in the current collection. This Seamaster Bullhead is a two-register chrono with the pushers at 12 o’clock. The crown – with OMEGA logo – always locks in the same position. Something that watch enthusiasts have been longing for.

Hot Topics
Laventure Automobile Chronograph With A Proprietary Movement — Marking A Huge Leap Forward For One Of The Industry’s Most Promising Brands
155 comments
We Talk To Swatch Group CEO Nick Hayek About The MoonSwatch
93 comments
Fratello Exclusive: An Inside Look At The MoonSwatch Production Facilities
75 comments
Selling Your Watch To A Dealer Or Trading It In — Tips From A Former Watch Dealer
49 comments
Summer Splash — Round 2 : Jorg’s Tudor Pelagos FXD Vs. Lex’s Hublot Big Bang Integral Ceramic Sky Blue
48 comments
Popular
A Question From A Reader: “Which Modern Speedmaster Is Closest To The Original Moonwatch?”
Robert-Jan Broer
13
Rolex Submariner – Historical Overview Of A Diving Legend
Robert-Jan Broer
22
Grand Seiko SBGA211 ‘Snowflake’ And Why I Didn’t Buy It
Robert-Jan Broer
22