Back when Swatch Group, and, as such, Omega, was still participating in the now-defunct Baselworld, we always had our first appointment with them. On the first day, in the first time slot at 9 am, Fratello was there with the whole crew. Our friends at Omega knew what was interesting to us, but, even so, the trays of watches just kept coming and coming. This is why it could’ve happened that we overlooked this beauty — the Omega Seamaster 1948 Limited Edition.

Two years and some change later, I would like to amend this mistake. I remembered this watch from that last meeting. I even took a wrist shot of it back then. However, after that, perhaps because the 2nd Speedy Tuesday Speedmaster, the Ultraman was already in the pipeline, I forgot about it.

That was until our IG Live Session with Jorg a few months back. While preparing for that call, we talked about forgotten Omegas. We touched upon some watches that the public never showed much love toward. The result of that talk is this review. As a matter of fact, spoiler alert, this is not going to be the only “forgotten” Omega that we are going to talk about in the upcoming weeks and months. But, for now, let’s have a quick look at this mesmerizing timepiece — the Omega Seamaster 1948 Limited Edition.

As you might have guessed from its name, the Seamaster 1948 was an anniversary piece in 2018. It came out to commemorate the launch of Omega’s first model line, which is still in production to this day, the Seamaster. Sadly, another release during that show, the all-new Omega Seamaster 300M line overshadowed these beautiful timepieces and this significant anniversary. 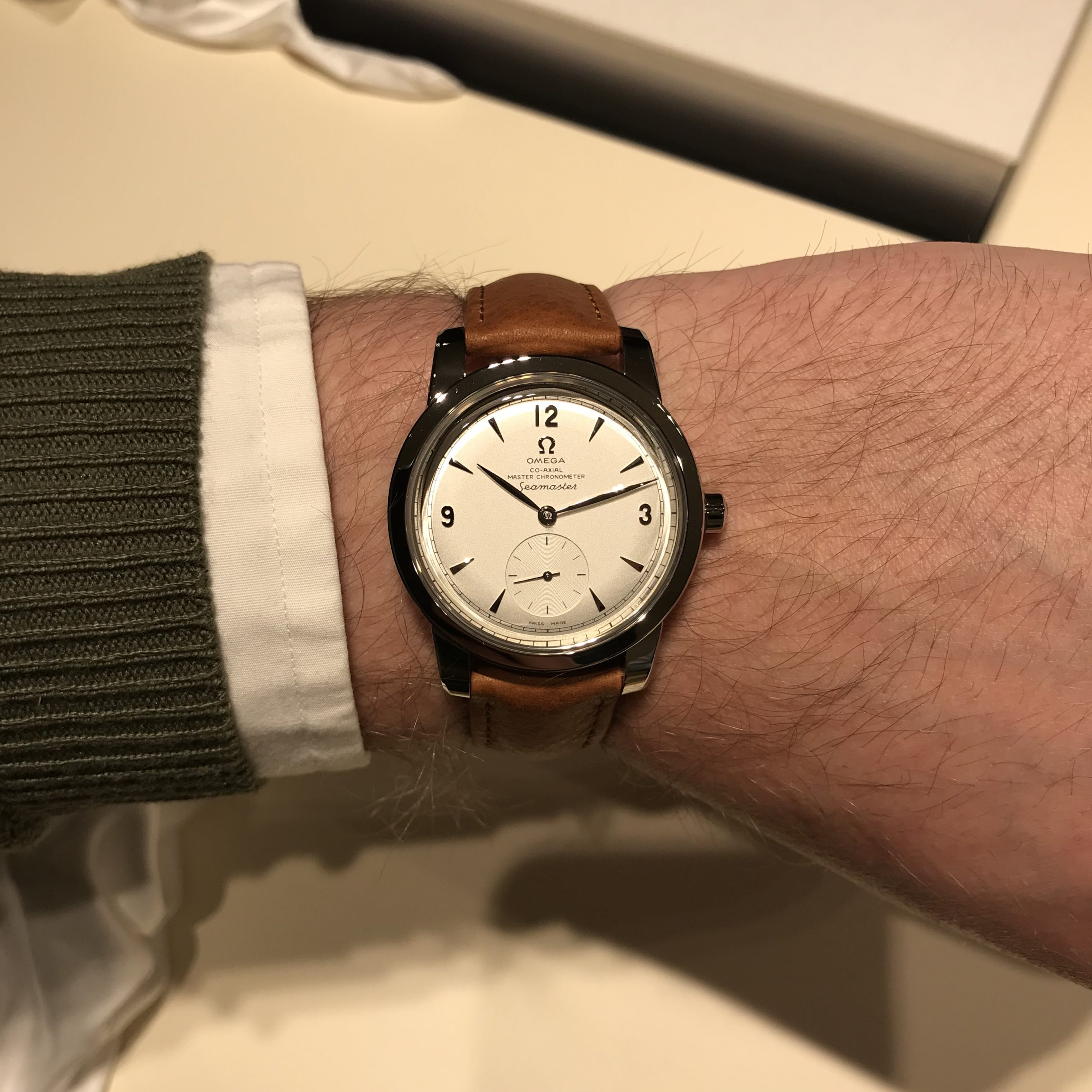 Omega supplied over 100,000 watches to the British Ministry of Defense (MoD) during World War 2. Service members mainly used these timepieces in the Royal Air Force and the British Navy. As such, the watches had to be extremely reliable and water-resistant. A few years after the war was over and the world was slowly getting back on its feet, the demand for robust timepieces appeared on the market.

Omega decided to use the technology to create a line of watches for the civilian market. Incorporating the know-how the brand gained with its MoD watches, Omega created the Seamaster line 1948. This was the Swiss brand’s very first model family. Full disclosure, this is not the first time that Omega resurrected this look. Some of you may remember that for the 2012 Summer Olympics in London, Omega already released a very similar Seamaster. This Seamaster 1948, however a bit different. Here’s how. 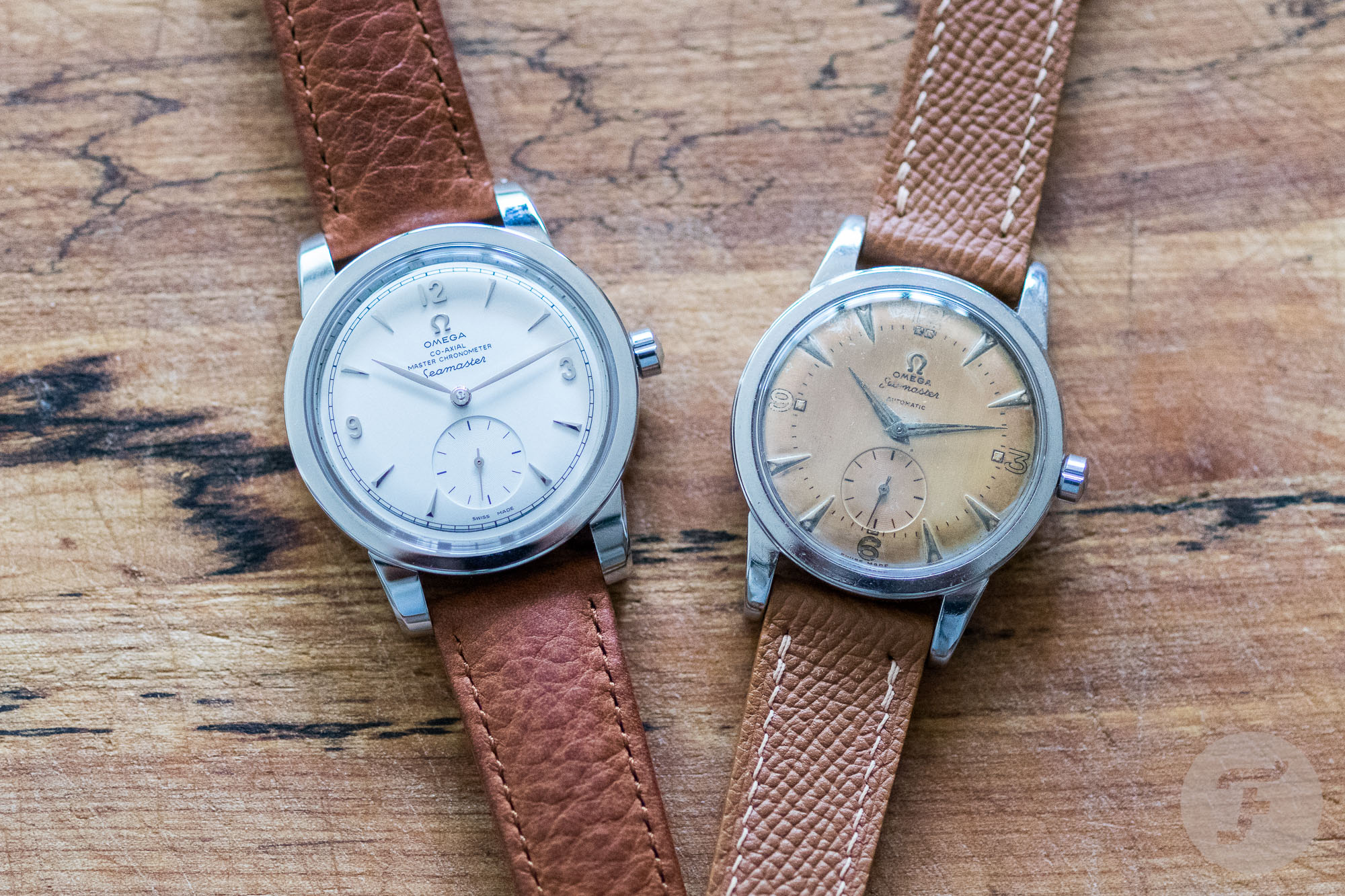 A few months ago, I wrote a 52Mondayz article about my vintage Omega Seamaster CK2657. That watch more or less possesses the same looks as the Seamaster 1948, so I thought it would be perfect for comparing them and seeing the “upgrades” Omega made with this timepiece. Now, the CK2657 is considered a Jumbo with its 36+mm case width. One of the things I love about this new Seamaster 1948 is its size. In favor of keeping the original look, Omega did not want to blow up the size too much. So, the case is “only” 38.4mm wide and 12.3mm thick. The lug-to-lug length is 46mm. Of course, the case is stainless steel with sapphire crystal on the front and back. The bezel, as well as the top of the lugs, are polished, the sides are mainly satin while the case back again has mostly polished finishing. 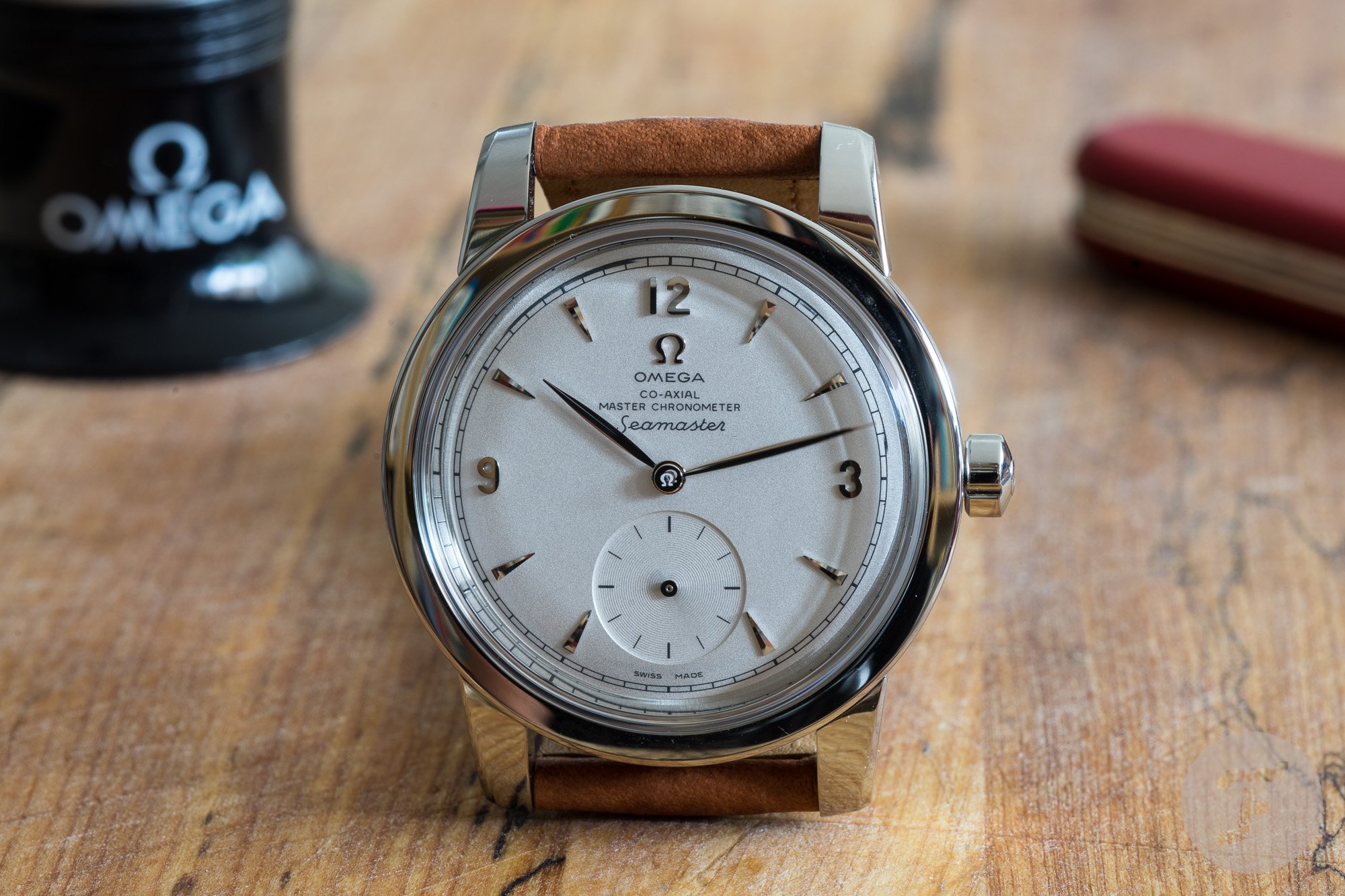 Due to its comfortable 38mm size, the Seamaster 1948 wears wonderfully. I have a large wrist, but even on me, the watch sits just perfectly. Guys with smaller wrists would surely appreciate the smaller size. To be entirely fair, while the watch is not large in diameter and not too thick, it still feels chunky and significant on the wrist. This is thanks to the wide bezel and the thick lugs. It’s not troubling at all but gives you a nice sturdy feel.

We have a 19mm caramel brown leather strap, padded towards the watch. Without knowing this, I paired my vintage Seamaster with a very similar strap. At least in color. Coincidence? A happy one, at that. Lastly, the buckle is also vintage-style with the large Omega logo and brushed/polished surfaces. Another nod to the vintage Seamaster is the vintage-shaped crown with the old-style Omega logo on it. 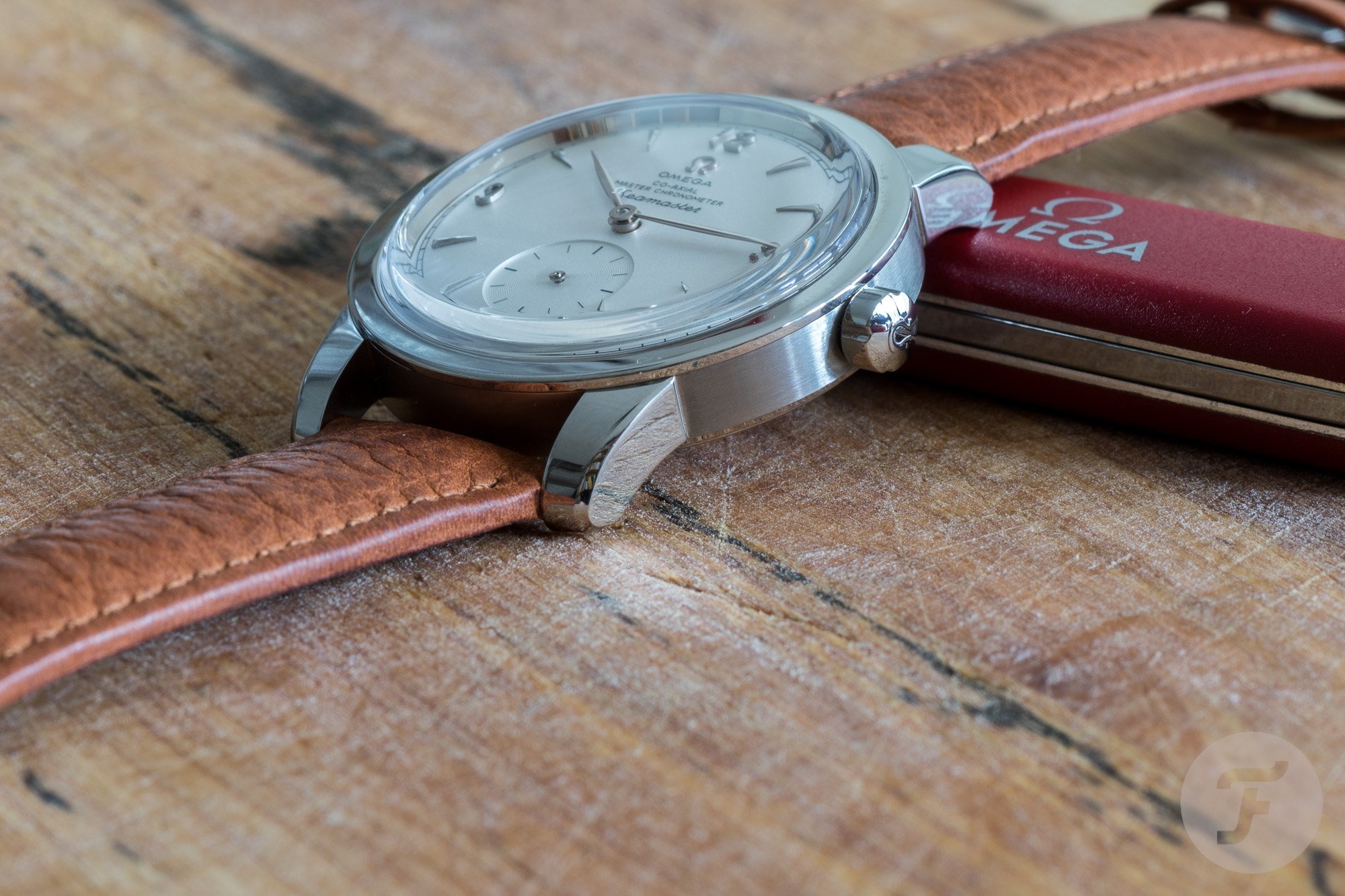 The watch face and the case are marvelous though this is not the only admirable external feature of the Seamaster 1948. Let’s flip the watch over and have a look at the case back in detail. Under the display sapphire crystal window is Omega’s 8804 caliber. On top of that, however, etched in the crystal by laser ablation is the 70th-anniversary commemorative design. We can see a Chris Craft boat and a Gloster Meteor aircraft. This plane was the very first jet plane used by the Royal Air Force. The two vehicles represent the servicemen who served in the air and on the sea while wearing an antecedent of this Omega Seamaster on their wrists. Around the window, you can find the limited edition number XXXX/1948, the model name, and the Naiad Lock system designation. By the way, the Seamaster 1948 is water-resistant to 60m or 200 feet. 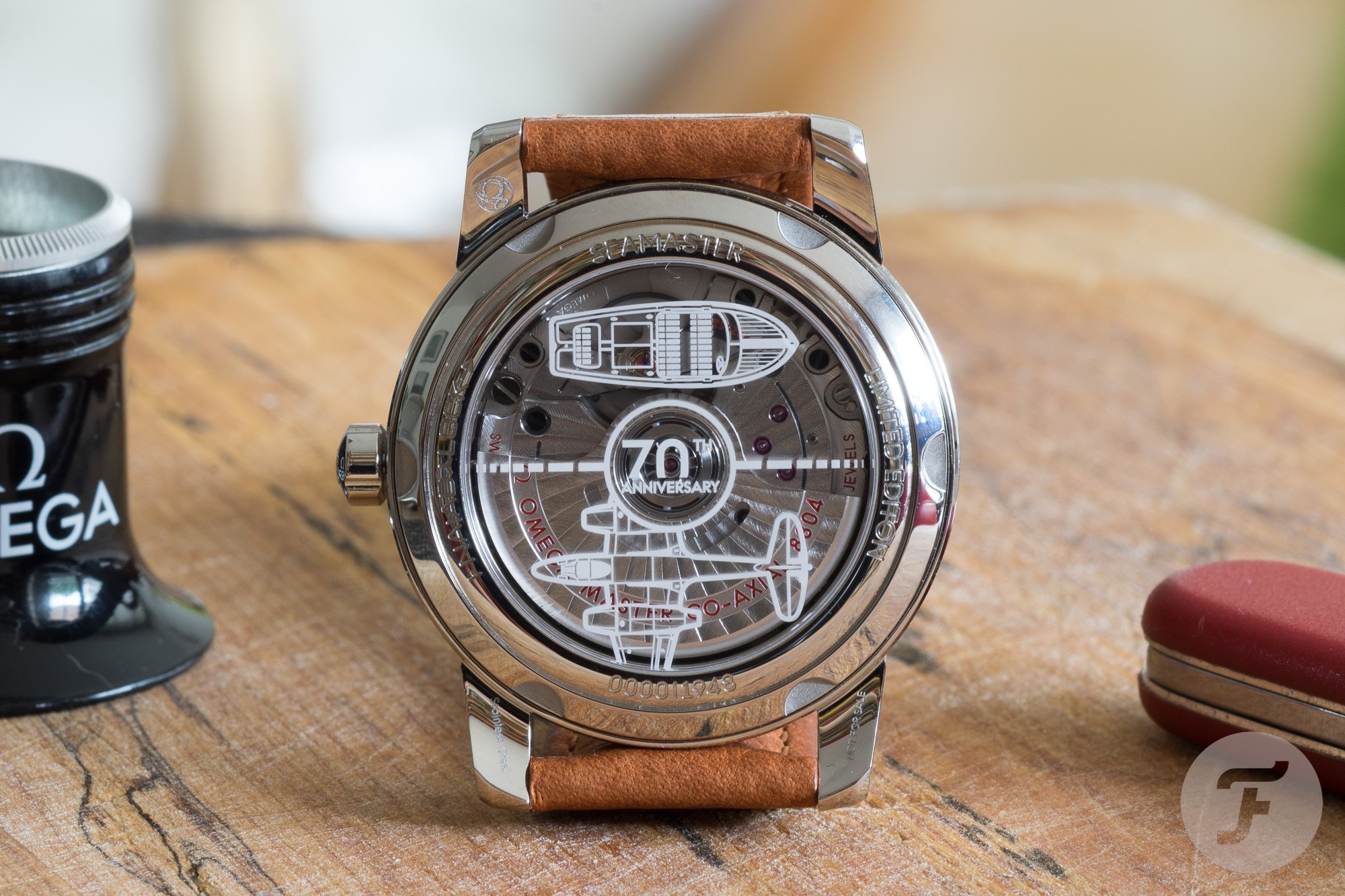 Moving on from the case, we now take a look at one of the essential parts of the watch; its dial. The opaline silvery domed dial is clean and elegant, yet it offers us a few exciting features. Omega created four versions of the Seamaster 1948. Two models in steel and two in platinum, with central or sub-seconds. My watch is the sub-seconds steel version with applied white gold indexes, numerals, and old-style Omega logo. You can find these vintage Omega Seamaster with a non-chronometer (like my vintage watch) or a chronometer movement.

This reedition is also a chronometer watch. Not just any chronometer, though. It is a Co-Axial Master Chronometer (by METAS), as you can see on the dial. The leaf style hour and minute hands are also white gold and diamond polished. Covering the dial is a domed sapphire crystal with anti-reflective coating on both sides. 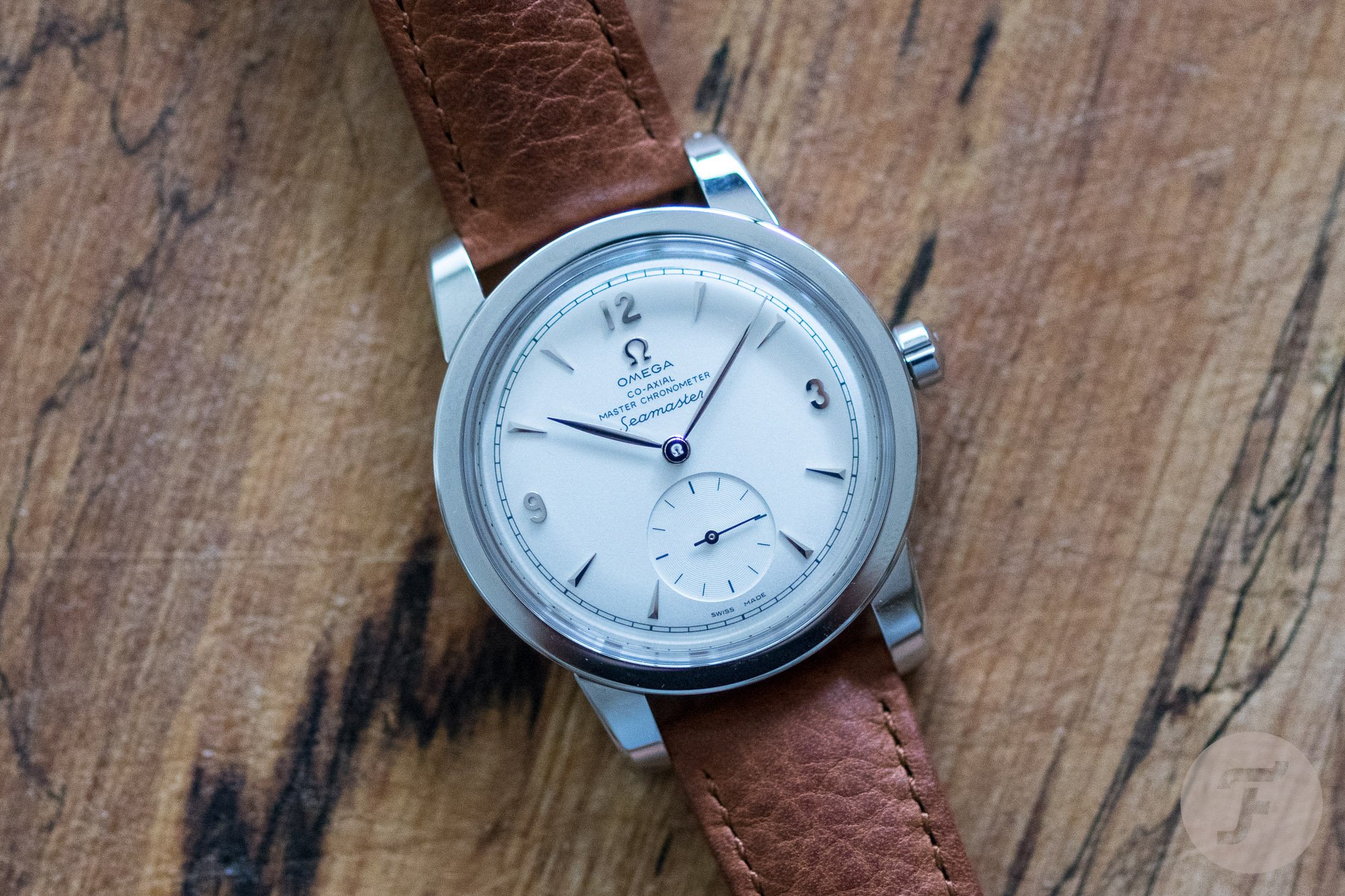 Finally, we arrive at the heart of this Seamaster 1948, the movement. Omega used its Co-Axial Master Chronometer Caliber 8804 this time. As stated above, the watch has a METAS certification and is self-winding in both directions. The movement has 35 jewels, a frequency of 25,200vph (3.5 Hz), and a power reserve for 60 hours. 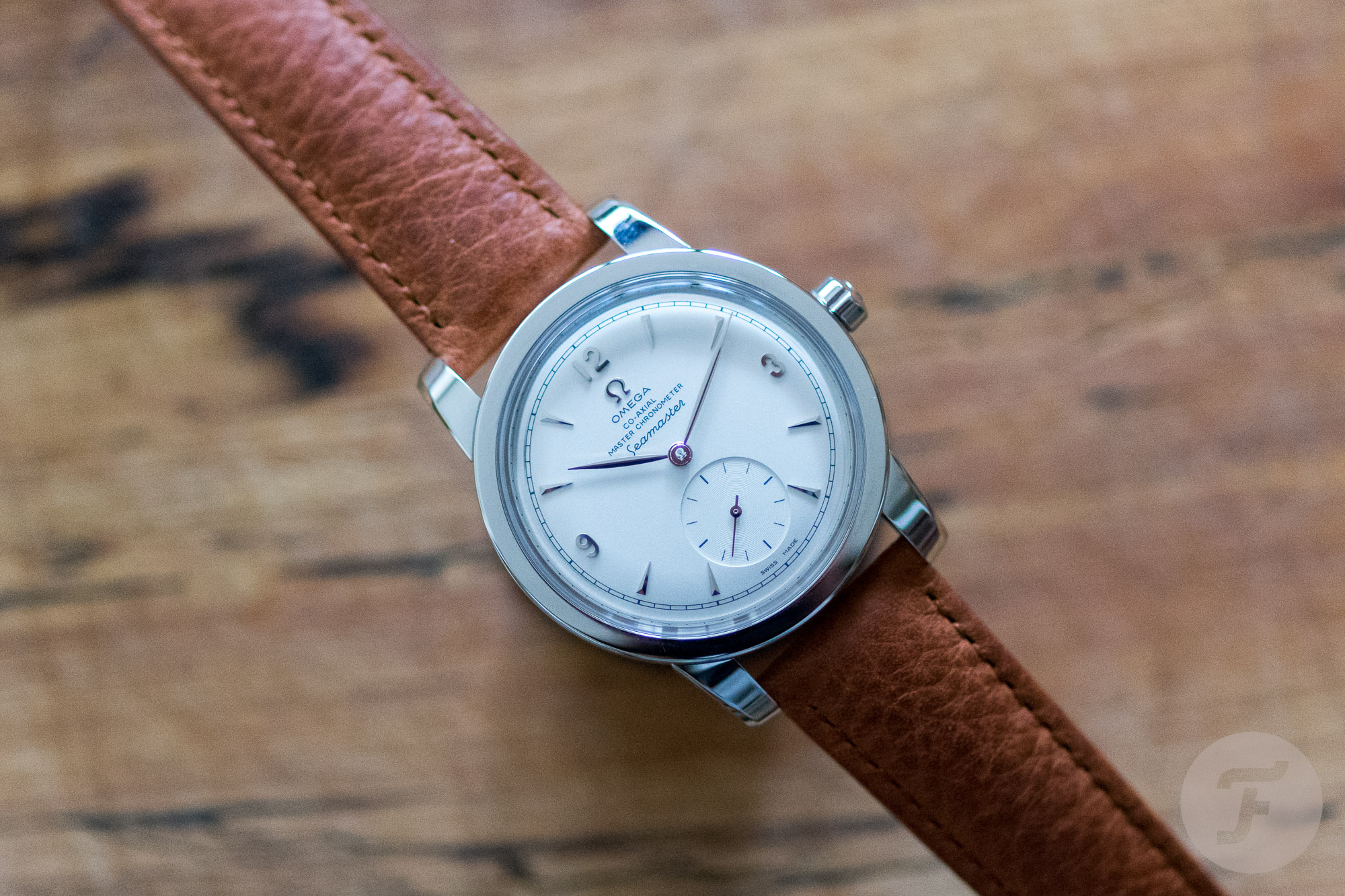 Furthermore, there are a bunch of exclusive features of caliber 8804 that we should mention. These include the high magnetic resistance, which protects the watch to at least 15,000 Gauss, and the silicon Si14 balance spring. As far as the decoration goes, the bridges and rotor are rhodium-plated and decorated with Geneva waves in arabesque. A pleasing contrast is created by the use of blackened screws, a blackened barrel, and a silicon balance wheel (also black). The 8804 is an intricately crafted movement but not an overcomplicated one. Just like the Seamaster 1948, which has many, classy, subtle details. Overall, however, it’s not a loud or flashy watch. 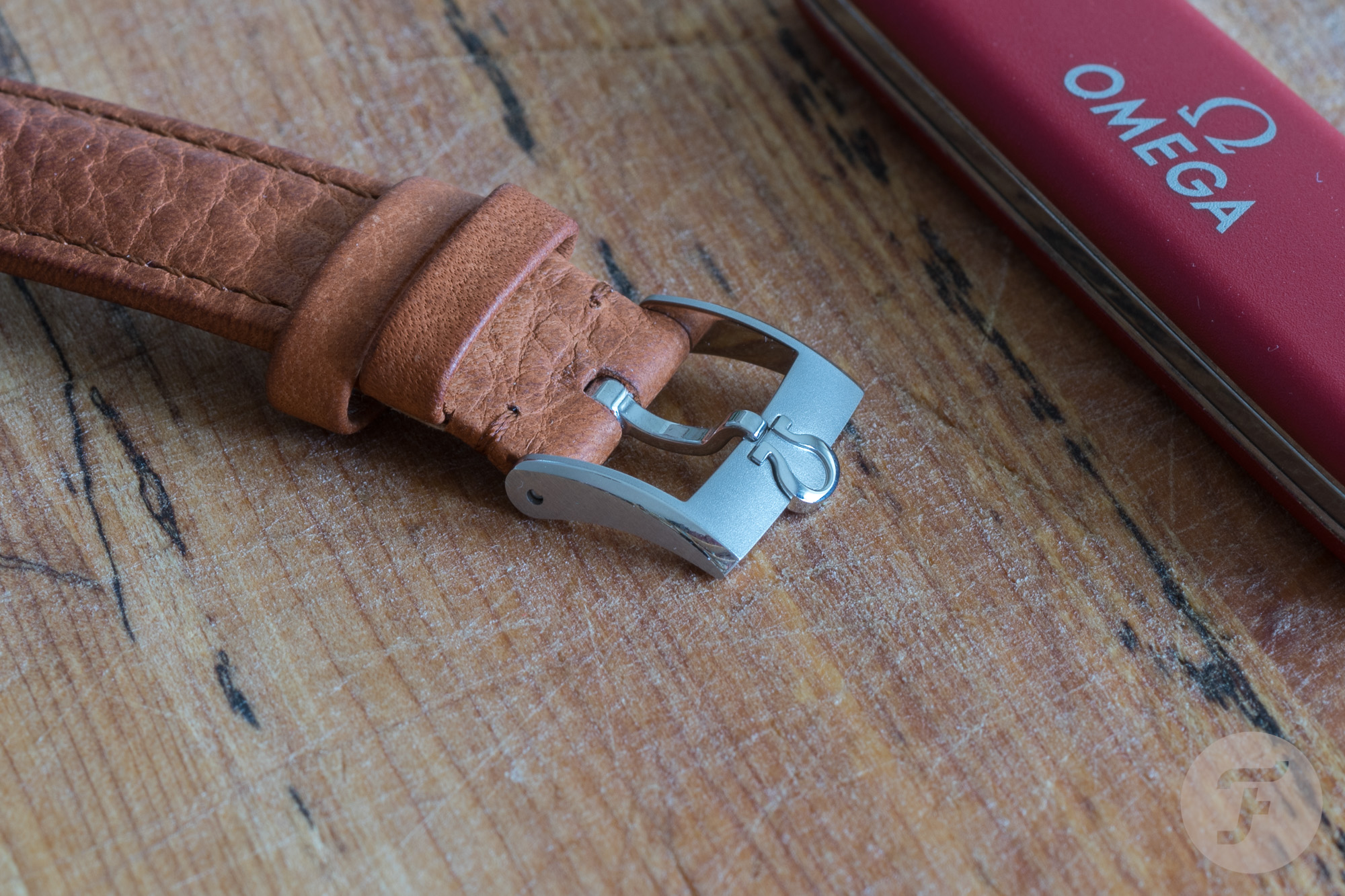 From the four Seamaster, 1948 watches Omega released for the 70th anniversary, this has to be my favorite. “Why not platinum?” you may ask. And that’s a valid question. Well, firstly the price of this one is €6,335 (the center seconds is €5,845). Meanwhile, the platinum versions are either €38,305 or €38,795 depending on your seconds hand preference. 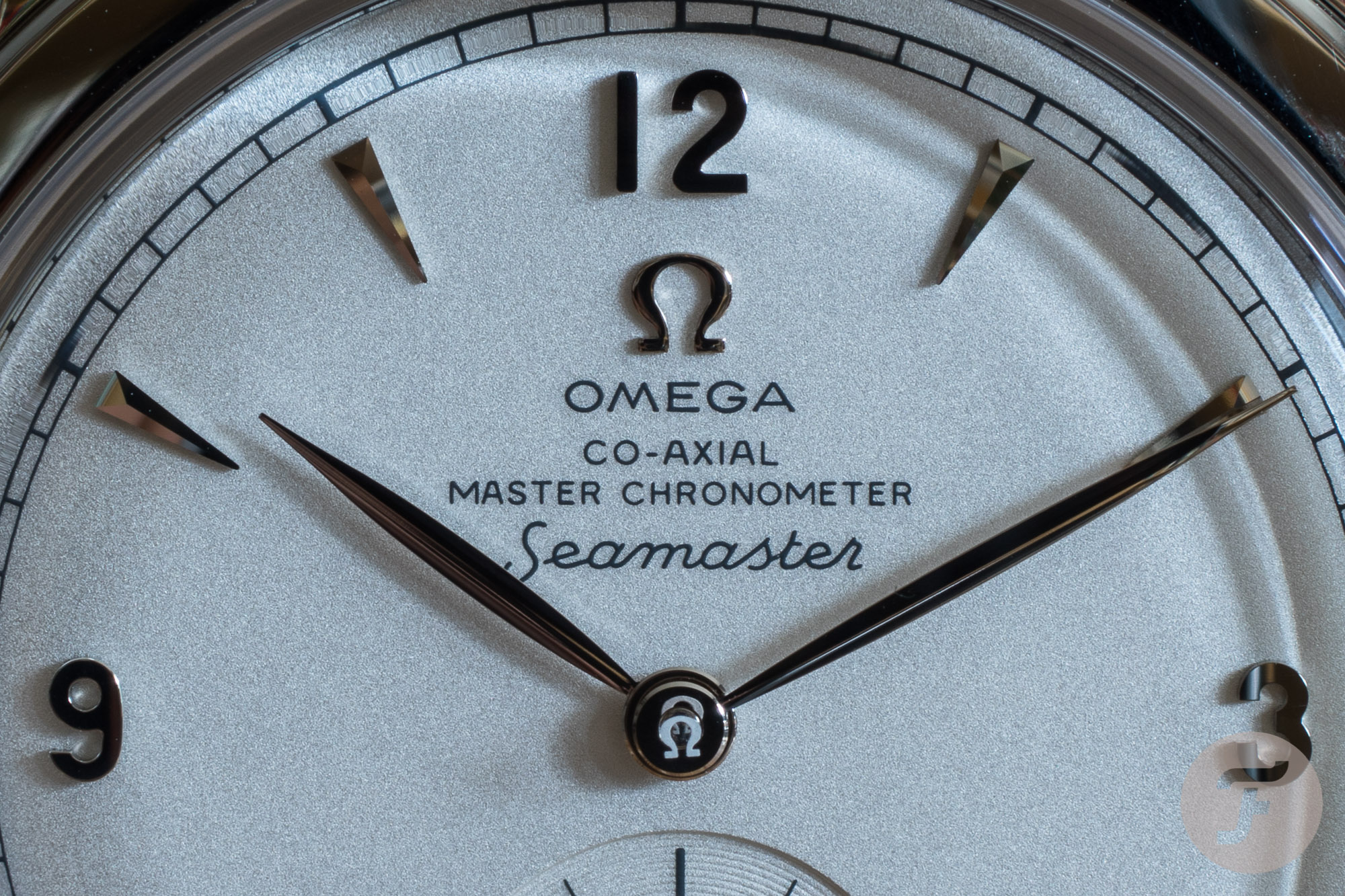 Money aside, though, I love the simplicity of the watch in terms of colors used. The steel case, the silver dial, and the white gold accents work well together. The sub-seconds give it a bit of twist, which is also lovely. The platinum models have yellow gold hands and indexes, which is not my favorite look with the silver-toned platinum case. Either way, the Omega Seamaster 1948 Limited Edition pieces are excellent watches and surely worth your attention. Ask to see them next time you are at an Omega Boutique. It’s best to see these beauties on the wrist. For Omega’s website, please follow this link.