Let me address the elephant in the room first. Did you also think, “hey, that new Aqua Terra in… (fill in your color of choice) looks like a great alternative to the Rolex Oyster Perpetual I can’t buy at my local dealer?” I know I did. The Omega Seamaster Aqua Terra 150M 38mm with five new colorful dials is a fantastic alternative to not just the 41mm “OP”, but also the 36mm version of that watch – I still have no clue why Rolex ever canceled the perfect 39mm OP. 38mm is the sweet spot for a luxury sports watch with a touch of color; it releases a perfect dose of color. Another important aspect of the watch’s power to impress is the structure of the dial. Gone is the nautical, horizontal “teak” pattern, and in is the more neutral, yet very fashionable and stylish sunray dial.

The blue is a grayish petrol blue kind of color that somehow reminisces the dial of the Nautilus 3700 that Omega calls Atlantic Blue. In other words, a blue that will sit well with a lot of people. When I say that the Bay Green dial looks a lot like the farewell Nautilus in green, you might want to call me lazy for that comparison. But what if I tell you that Omega uses the same dial maker as Patek Philippe does? Anyway, The blue, green, sandstone, and saffron brass dials received a PVD (Physical Vapor Deposition) treatment, a sun-brushed finish, and a coat of and lacquer. The terracotta (red) one, which is done using CVD – the “C” stands for  “Chemical”  way of adding color – doesn’t have a sun-brushed pattern. 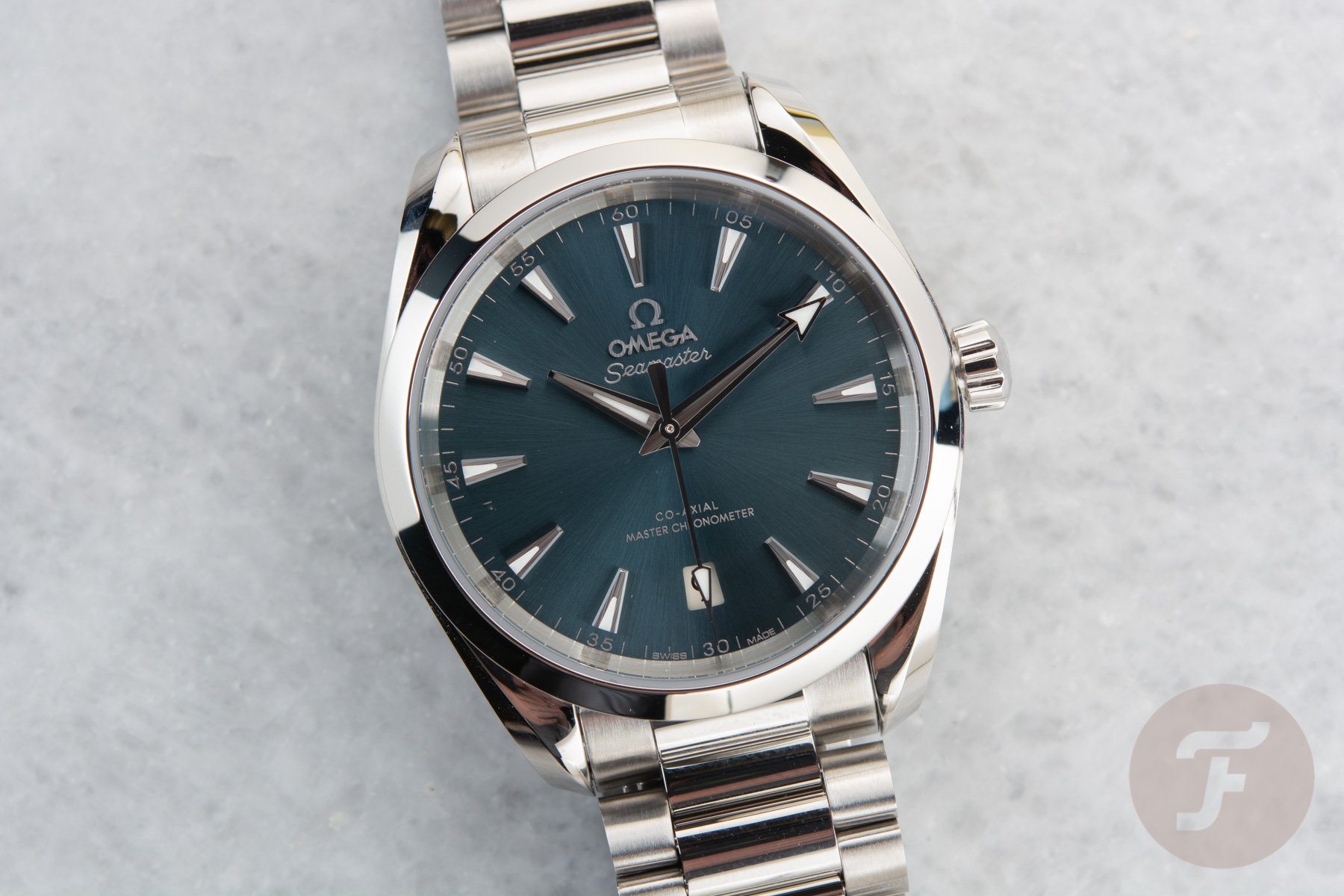 I will get to the new stuff, but first, the stuff you already know. The symmetrical shape of the case shape remained unchanged, and so is the domed scratch-resistant sapphire crystal with anti-reflective treatment on both sides. The same goes for the certified chronometer caliber 8800. 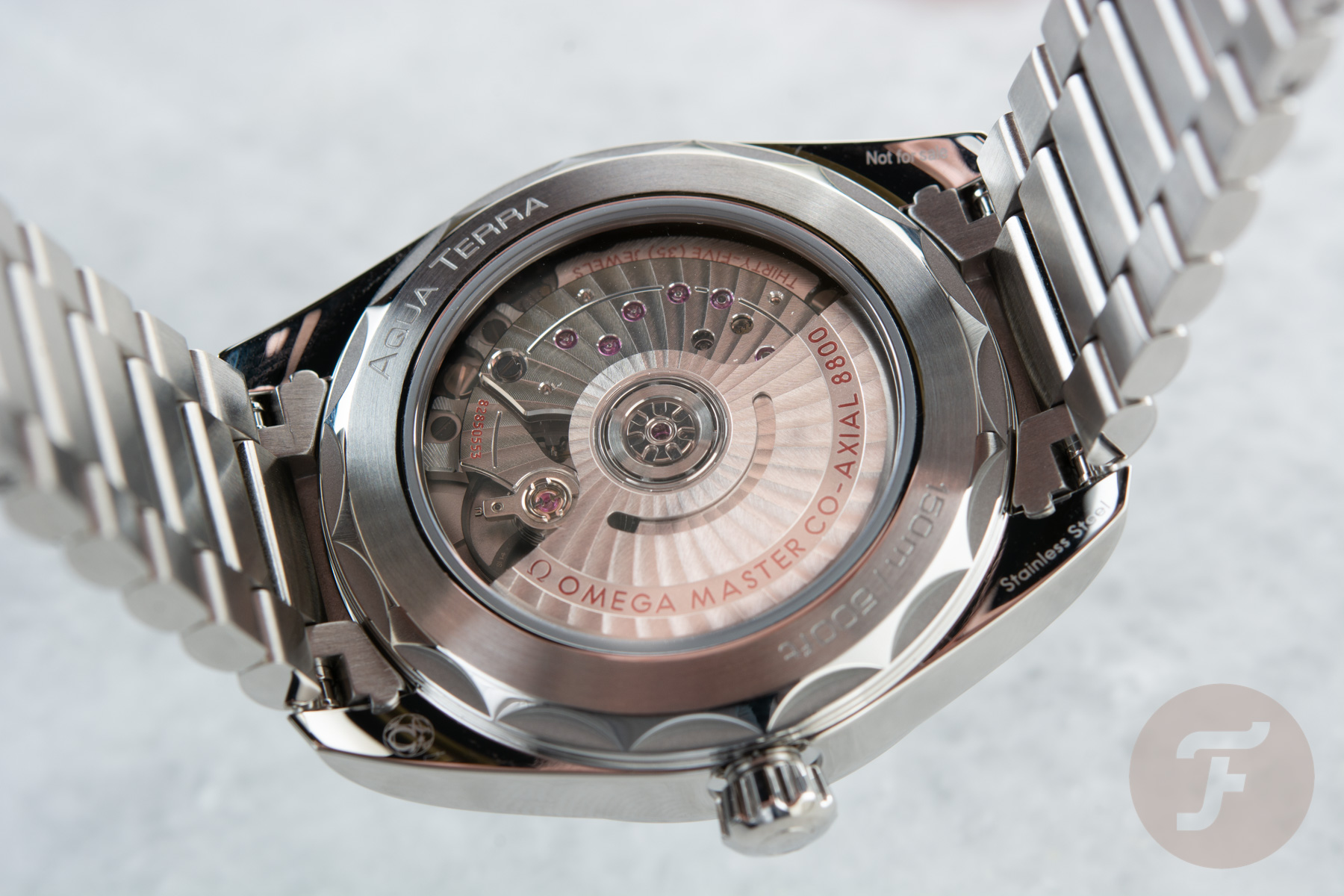 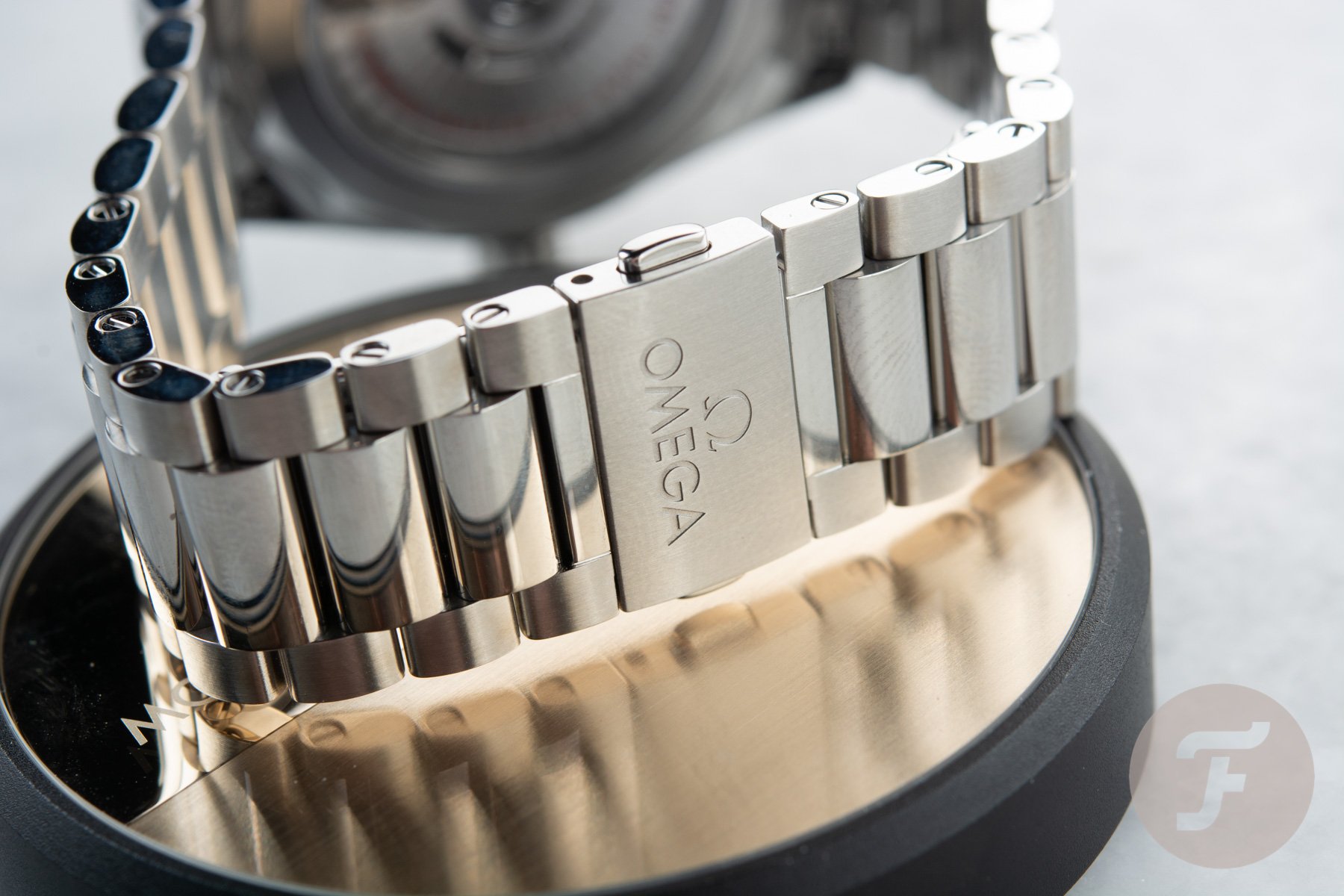 This automatic movement is a Master Chronometer certified by the Swiss Federal Institute of Metrology (METAS). The bracelet that is both brushed and polished is new, though. The design was only used once before on the gold Aqua Terra Small Seconds in gold. You will have to look closely, but it does taper. From 19mm to 17mm. 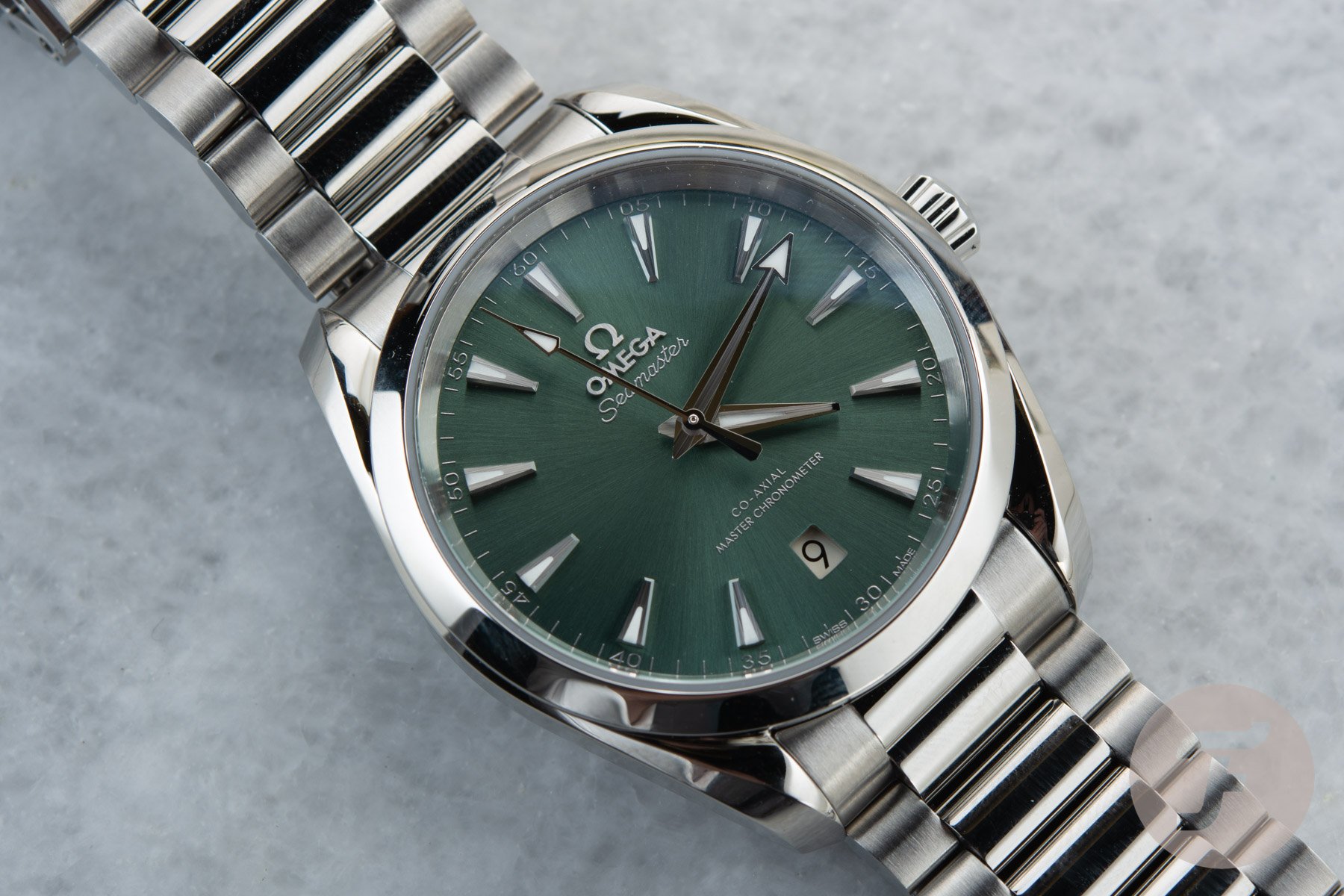 I do like the blue, green, and sandstone, but the real eye-catchers are the saffron and terracotta versions. These two colors are rich and deep. The saffron has hints of orange, salmon, and brown on top of a dark yellow foundation. Because of the many shades and the radiant effect of the sunray decoration, the PVD dial is vibrant and plays very nicely with natural light. 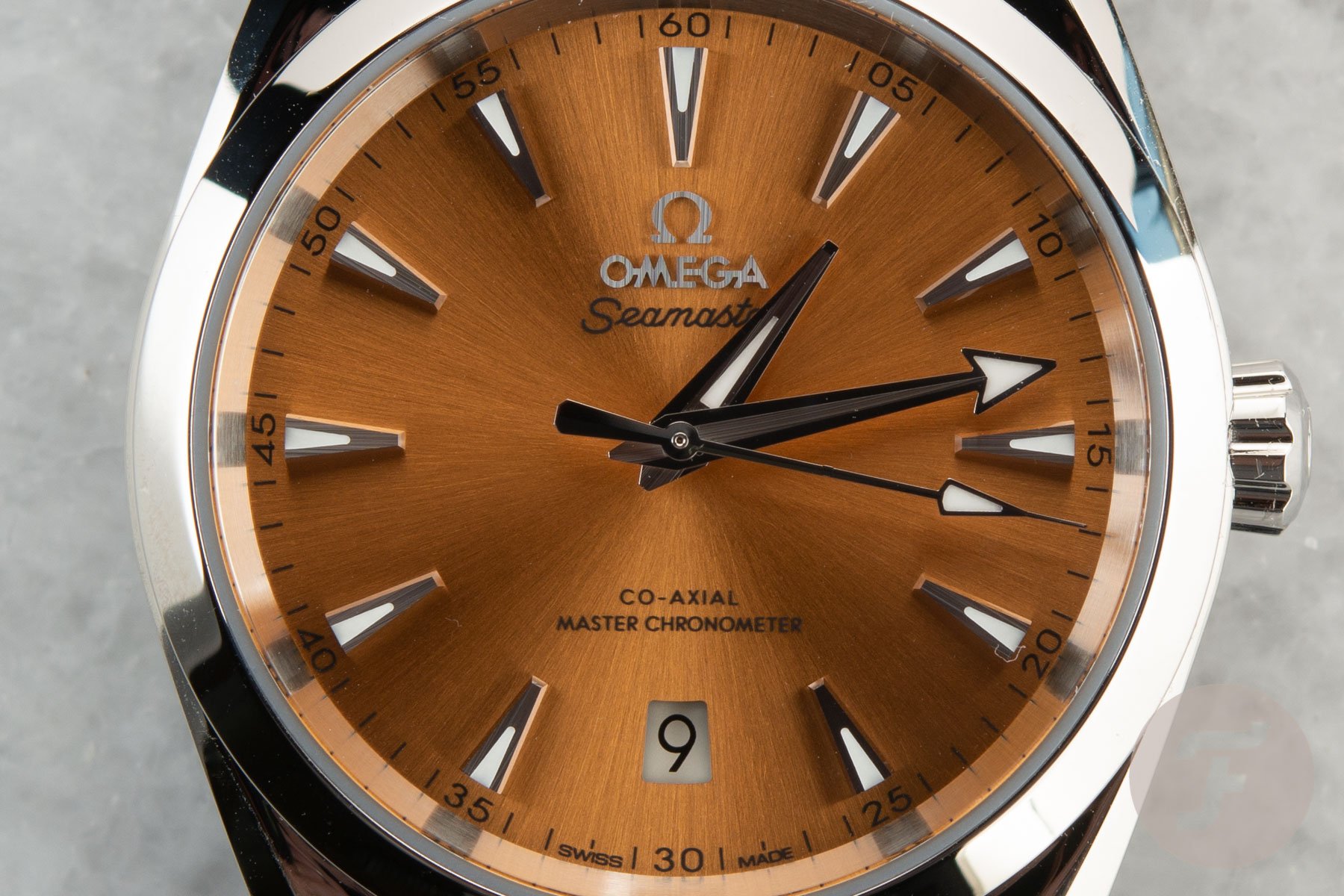 The terracotta-colored Aqua Terra – watch that of course has the same 38 x 12.26mm dimensions and lug-to-lug length of 45.1mm as all the other 38mm “AT”references – is quite different. The CVD dial lacks the sunray effect, but the deep red color is prominent enough to still make an impression. To make sure you won’t get tired soon of your red watch, Omega chose a warm and natural tone with hints of brick and stayed away from signal red. Yes, a bright red is cool and sporty, but after a while, it might become a bit gimmicky. And the Seamaster Aqua Terra 150M 38mm is a lot, but not that.

Now, what about that stamped out date window? The trapezoidal shape is nice. The fact that is doesn’t have a frame does take a little getting used to. I think I would have preferred an index at 6 o ‘clock. That would have required another movement, though. And the watch would be even more like an OP. At least now, the date is a plus when (functionally) compared with that fierce competitor. 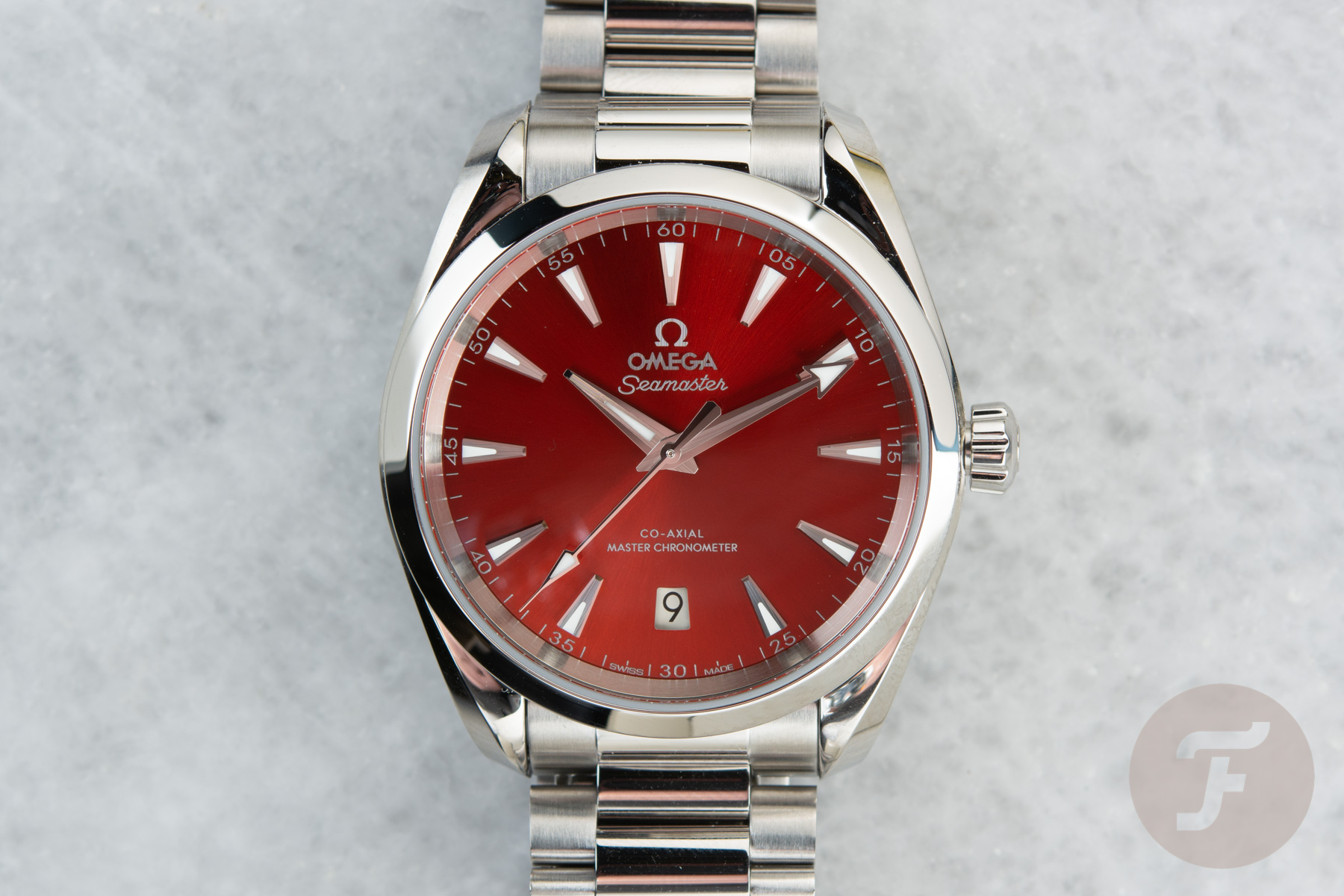 The price of the new, colorful five versions of the Aqua Terra 150M 38 is CHF 5,600 without tax. And you get five years of warranty. There are also new 34mm versions out with rounded indexes and date window — please visit the official Omega website for more information on those. Oh, and no news on the discontinuation or the introduction of a new Railmaster. Not yet, but the year is only a few months underway. We will, of course, keep you posted.