When RJ and I discussed the topic for this week’s Speedy Tuesday I had no idea how timely this is. See, for someone who loves vintage Omegas and especially chronographs (Seamasters and Speedmasters alike) the Speedmaster 125 is always in the back of their minds. It’s an odd-one-out in a good way for so many reasons. Reasons which we will talk about below. So after our discussion, I said to myself; We’ve covered this watch numerous times, not sure if there’s anything else left to say. Well, when I looked back in our archives I realized that the last article about the Omega Speedmaster 125 is from 2013. And that mainly concerns Adrian van Hooydonk BMW Group’s design director and his 125. One could argue that there isn’t much new to say about vintage watches, there are still some new discoveries we come across once every blue moon. 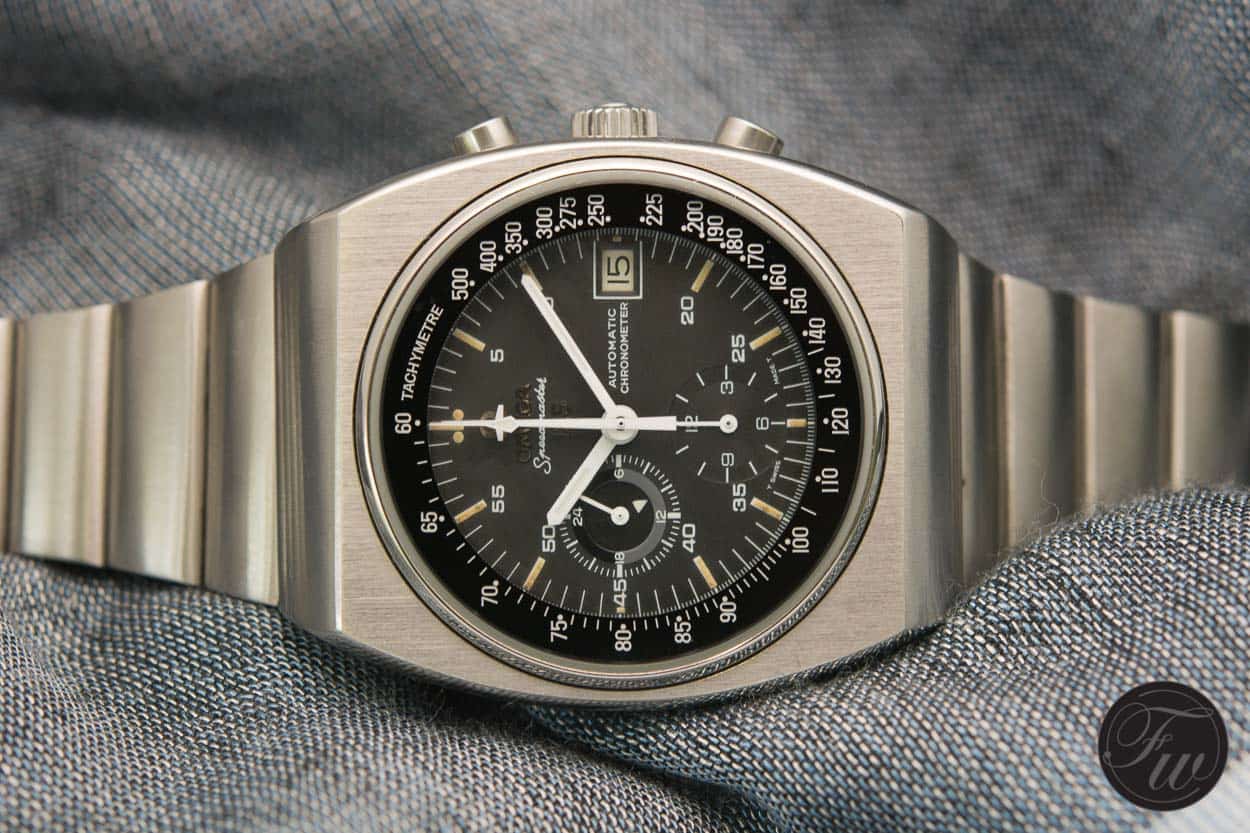 Just to bring everyone up to speed regarding the Omega Speedmaster 125 (178.002) here are the facts. The watch came out in 1973 marking the 125th anniversary of the brand – Then 23 years old Louis Brandt, the father of the brand, set up his workshop in June 1848. While it was not the only unique model that Omega released to commemorate this special occasion, it is the one most of us associate with the event. At the time the Speedmaster 125 was a very progressive watch both technically and design-wise. It incorporated many cutting-edge features. To start with, the case is thick, bulky and heavy even for the 70‘s. It features an integrated bracelet, something not too many Omega chronographs from that era had (like the Omega Lobster 188.001).  Staying with the case, the Speedmaster 125, just like the Mark IV, also has a two-piece case. 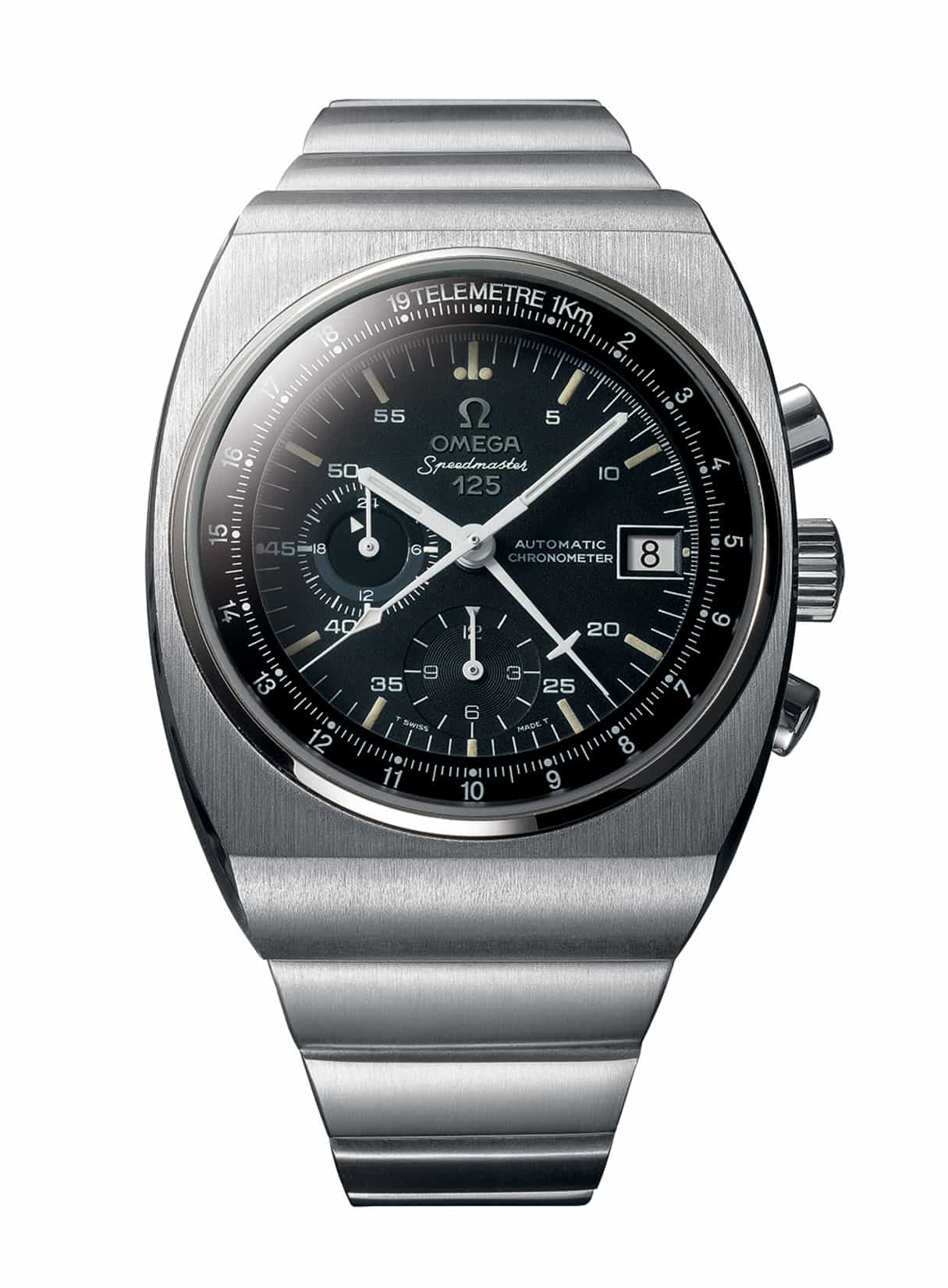 Does it look familiar? – The image Omega used on their Speedmaster 60th Anniversary poster

What it means is that the case consists of two parts; the outer frame which gives the Speedmaster 125 a square shape and holds the bracelet. It also has an inner round case, which houses the movement. This smaller round watch case can be pushed into the square case frame where an o ring/gasket holds the case in place. The dial layout is exactly the same as the Omega Speedmaster Mark IIIs. Obviously, the name is different. Here, the Omega logo and wording, as well as the “125”, are applied steel, while the “Speedmaster” is painted. The rest of the layout is the same: date at 3 o’clock and 2 subdials at 6 and 9. The 6 o’clock subdial has the 12-hour indicator. The sub at 9 has the 24-hours indicator disk and the continuous seconds hand. The hands are also identical to the Mark III. 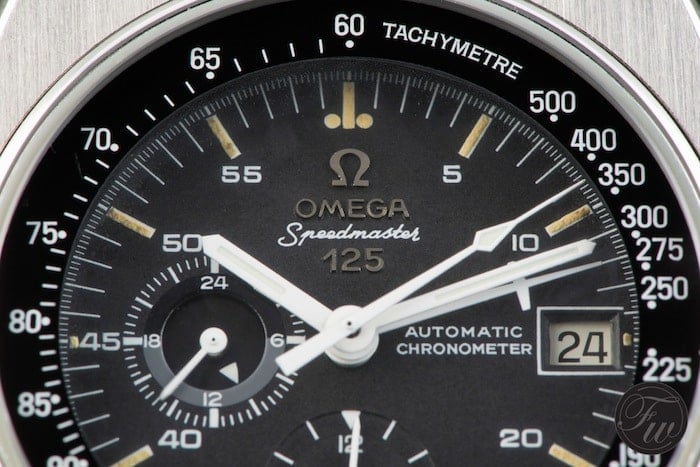 What most of us know about the Speedmaster 125, I presume, is it is a one of a kind movement. A 17-jewel caliber with 28800 A/h and 44 hours of power reserve. The Omega caliber 1041(ticking inside the Speedmaster 125) is basically an improved version of the Omega caliber 1040. That is a Lemania derivative since the base caliber is Lemania 1340 with some changes like the 24-hour indicator. Now the 1041’s base caliber is the Lemania 1341. What is interesting about this movement is that it is the World’s first chronometer certified, automatic, chronograph movement. There may have been chronometer certified chronograph movements before, but that was not automatic. There may have been automatic chronograph movements that were not chronometer certified. But 1041 is the first one where all of these attributes are present. Furthermore, Omega only used this caliber once, during the production of the Omega Speedmaster 125. 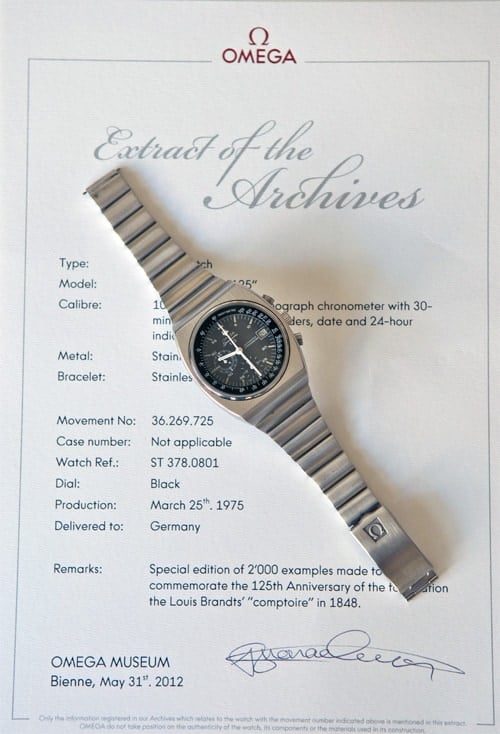 It is also worth mentioning that the caliber 1040, 1041. Furthermore, the 861 and even the 321 are all the derivatives of the same Lemania caliber. This 27mm chronograph movement became the legendary 27 CHRO C12 that many vintage Omega (and Tissot amongst others) watches used in the 1940’s onwards. Another watch public service announcement connected to this topic is the chronometer certification that people often call it COSC certification. The Swiss institution COSC (Contrôle Officiel Suisse des Chronomètres) was founded in 1973 the same year as the Speedy 125 came out. Which means that early Speedmaster 125s could not have had COSC certification. Later, however, COSC certified the 1041 movements inside the Speedmaster 125 watches. The long production span made this possible. More about the actual production dates I’ll discuss below.

Are There Really Only 2000 Pieces?

Seasoned vintage Omega fans will raise their eyebrows at this point. “What about the limitation of 2000 pieces? That is also a unique feature of the watch.” – Yes, this is how we thought of it as well. Until recently, that is. Let me explain. There’s always been a debate about the accuracy of this information. Way too many watches are for sale at any given time. Not to mention the number of parts, service cases and bracelets floating around the web. You can find many of the watches and/or parts on eBay, Chrono24 or your favorite watch forum. This suggests that either the watch was so unpopular that a lot of those 2000 pieces are still looking for new owners. Or, that many more than the above number saw the light of day in the mid-70’s in Biel. Andy K from caliber1040.com already speculated about this on this great site. 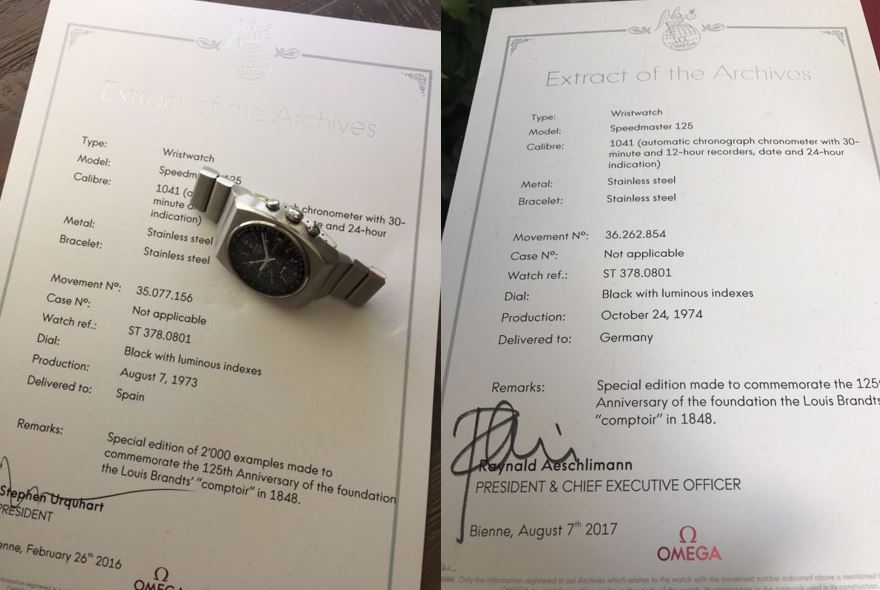 The official communication for many years was that only 2000 pieces were produced by Omega of the Speedmaster 125. It was also often said that while the watch is limited in numbers the pieces are not marked in any way. This means that the watches had not XXXX/2000 numbering or “Limited Edition” markings on them. The 2000 pieces limitation, however, was even communicated in early Extract of Archives that the Omega Museum provided to Omega Speedmaster 125 owners who requested these. It specifically said: Special Edition of 2,000 examples (see photo below). Note that if you see any recent extracts of the Speedmaster 125 model this part (at the bottom of the page) is missing. It only states that said watch is a special edition for the anniversary. This is so, because – allegedly – the number is much higher than 2000 pieces. 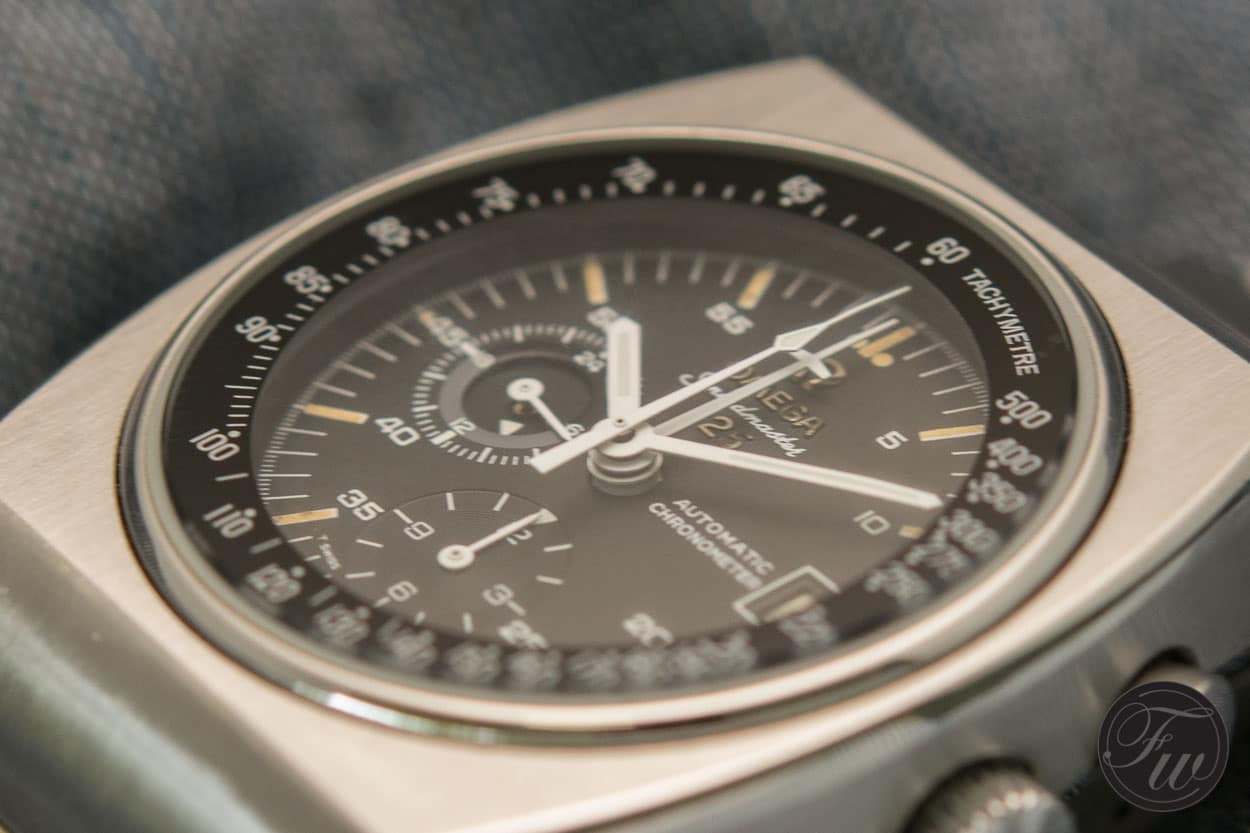 Information from the Museum

Contrary to popular belief the Omega Speedmaster 125 was produced much more than 2000 pieces only. We asked the Omega Museum for clarification and they were happy to shed some light on the case for us. While they cannot (yet) confirm the production number as they are still researching the matter they told us a few interesting things. According to the data gathered for producing the Extract of Archives, a service that clients can ask for, the first production date of the Speedmaster 125 is June 1973. The last date is as late as November 1977. This seems to point into the direction that indeed more than 2.000 pieces of this watch created. 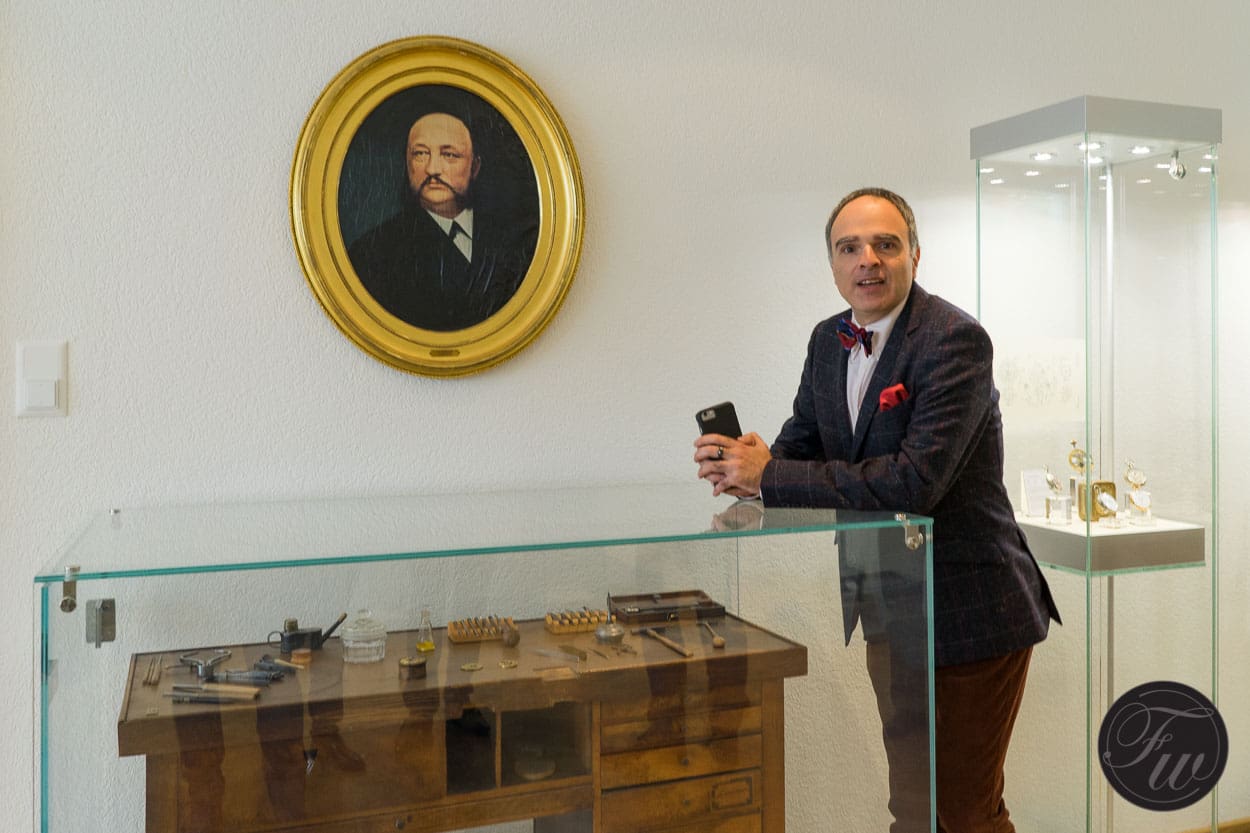 Museum Curator Petros Protopapas with the portrait of Louis Brandt

Another piece of trivia connected to the Speedmaster 125 is the event where Omega actually introduced the timepiece. Exactly 125 years after Louis Brandt opened his workshop, between the 17th and the 21st June 1973 Omega organized a World Congress in Montreaux, Switzerland. More than 1300 guest were invited from all over the world. Agents, dealers and other guests came from over 160 countries. Funnily enough among the invited visitors was one of the first Bond girls, Ursula Andress. The Swiss actress who played Honey Ryder along Sean Connery in the first ever James Bond movie Dr. No, in 1962. Later she appeared in a second – albeit unofficial – Bond movie, Casino Royale in 1967 portraying Vesper Lynd. This was the event where the brand officially announced the Omega Speedmaster 125. 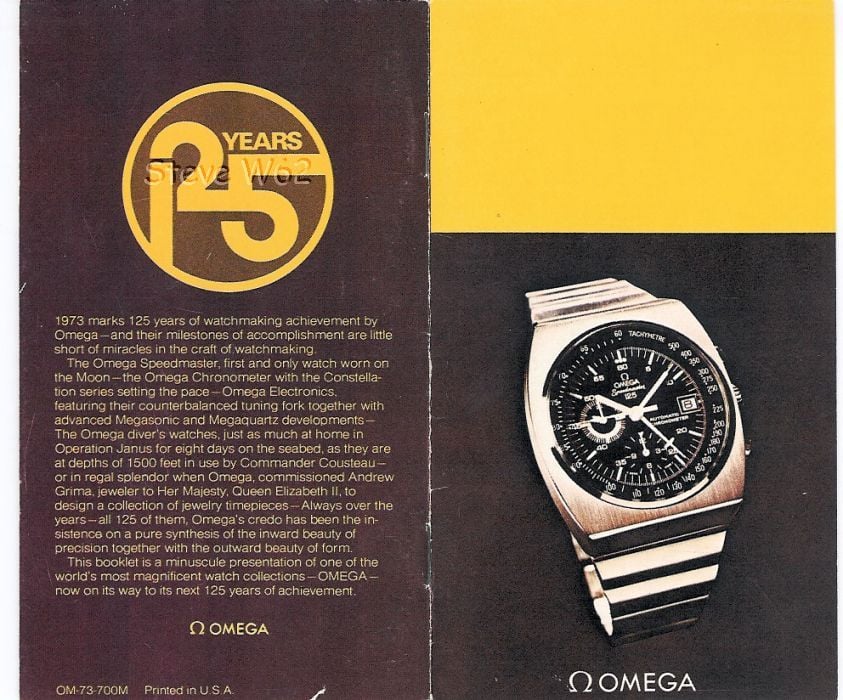 Regardless of the production number the Omega Speedmaster 125 is still one of the most interesting and loved watches from Omega’s crazy 1970’s line up. It is a huge timepiece and does not fit everyone’s wrist for sure, but it is also a significant model for Omega’s history and technical development. The clarification is also a sign that brands like Omega do care about their heritage and overall perception of their after sales. Surely, like many other companies, they take inspiration from bygone models. However, caring about vintage Omega watches spans over this. It is also crucial for Omega to see their past clearly. To understand where they are coming from to determine which way they want to move forward. With the help of the Omega Museum, we now started to unfold the story of the Omega Speedmaster 125. We solved another small piece of the vintage Omega mystery.

I would like to thank Omega Museum and Mr. Petros Protopapas for his help and support.