It was 1969 — the year of the Moon landing — when David Bowie released “Space Oddity”. The year would arguably be the most significant in the long history of Omega watches. But the true space oddity would come out a year later. A batch of Speedmasters left the factory with a tiny little fault. It was nothing mechanical, nothing problematic, but a fault nonetheless. Or, in more friendly wording, an oddity. Here we have the Omega Speedmaster 220 misprint bezel.

In a world obsessed with striving for perfection, it can be the rare faults that turn out most attractive. Today, I ask you to embrace the wabi-sabi, my dear watch geeks. 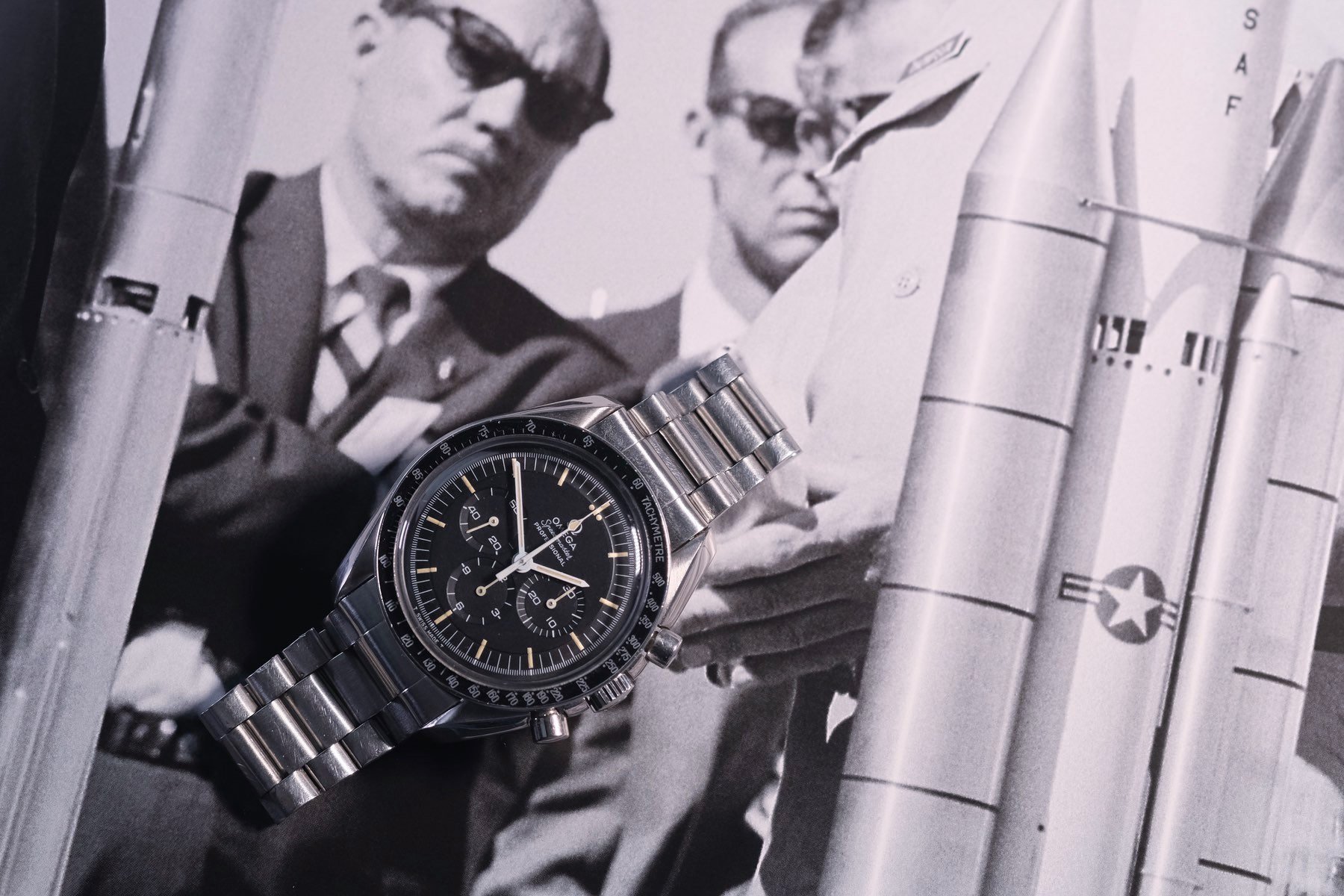 Watch aficionados are known to lose themselves in tiny details. Be warned: I am covering such a tiny detail today. It is perfectly reasonable for 99.99999% of people to not care one single bit about this. But if you are in for a little geeking out, join me!

The misprint was quickly discovered and corrected. It is believed that they slipped through for about seven weeks, although this is unconfirmed. What is certain is that they were delivered in the fall of 1970. Some sources claim they were all sold in Switzerland, while others mention Italy and even South Africa. 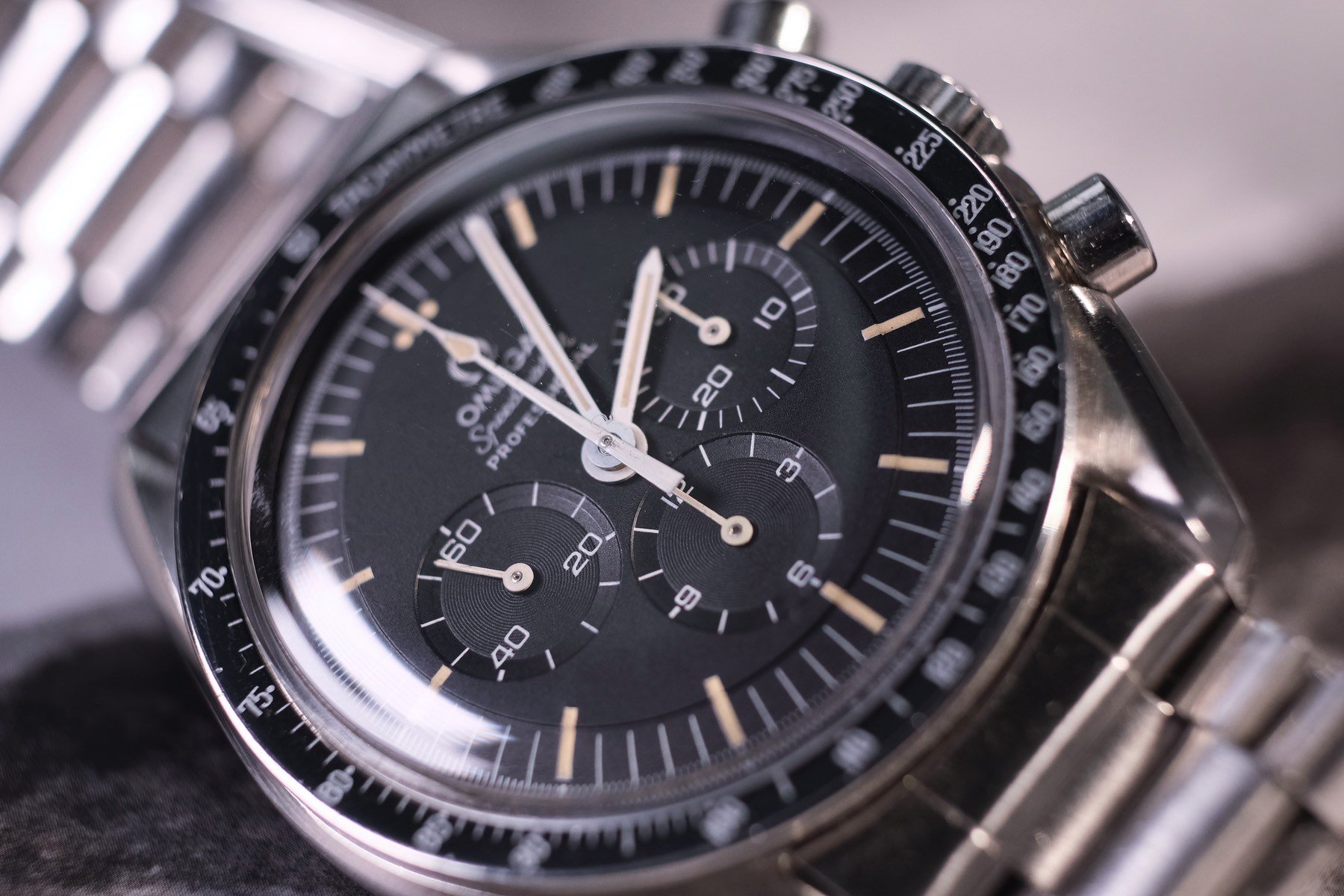 Before we continue, what was a tachymeter again?

I mentioned that the misprint bezel was “nothing problematic”. I took the liberty of assuming that you, like most of us, do not practically rely on your tachymeter. Technically, though, this misprint could lead to faulty conclusions about speed or other hour-based measurements. Let me digress for a super-short refresher on the tachymeter. You know, just to be sure we all know what we are talking about.

When combined with a chronograph complication, a tachymeter scale allows the user to compute a frequency per hour based on a seconds-defined event. Or in simpler language, when you measure the duration of an event in seconds, the tachymeter shows how many times that event would occur in an hour. Let’s say you engage the chronograph when you start a one-mile drag race. You disengage it when you cross the one-mile point. The seconds hand now points at a number on the tachymeter scale. That number is your average speed in miles per hour.

So if you traveled a mile in eighteen seconds, you will have done an average of 3600/18=200 miles per hour. The misprint bezel, however, displays 220 at that position. Now, that might be good for your ego, but it is not so good for accuracy. 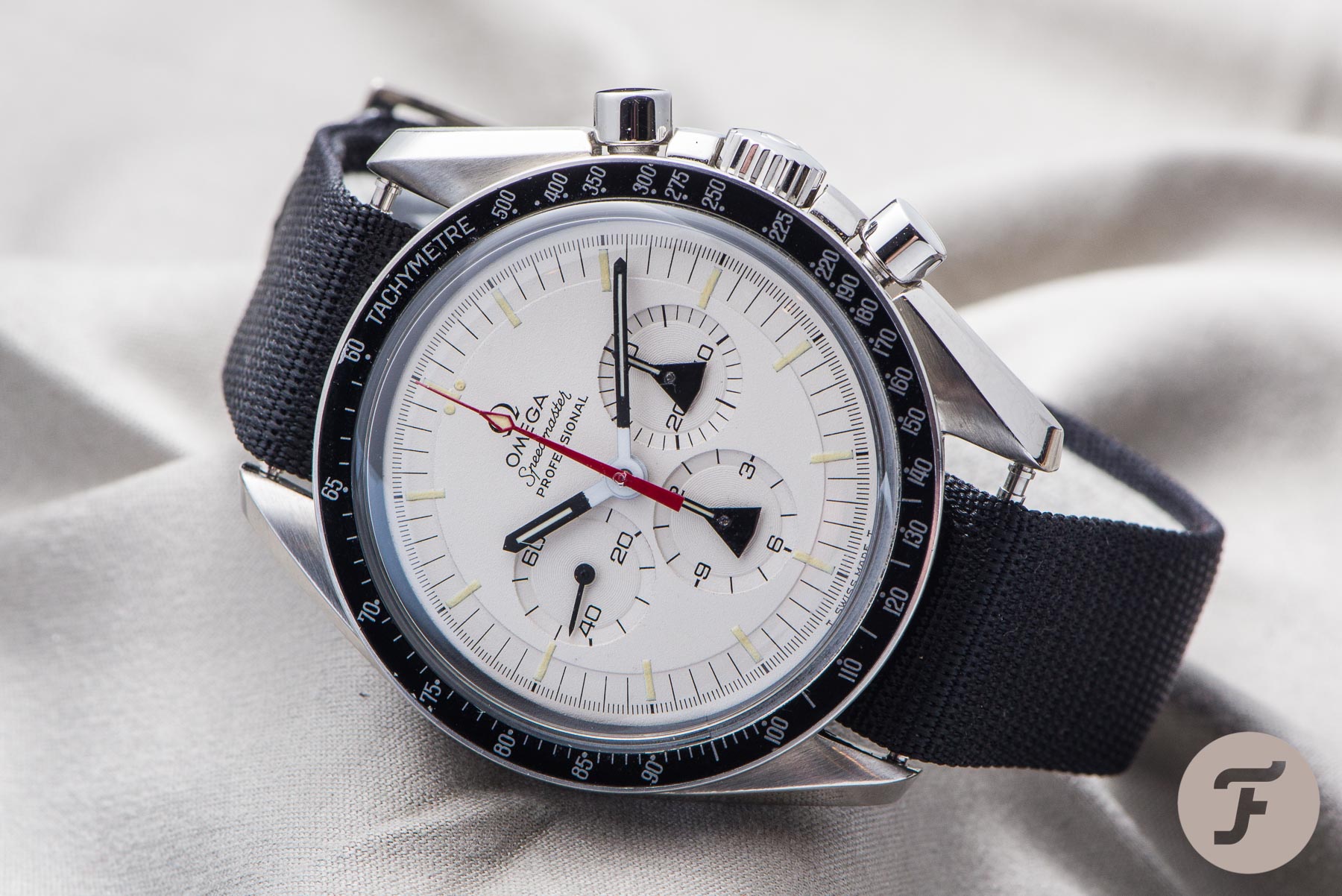 If you wanted to track down one of these misprint bezels, you would be limited to two Speedmaster models. One is an Alaska Project prototype. Unobtainium, in other words. The other is ref. 145.022-69 (which served as the basis for that Alaska prototype as well). This is considered a pre-Moon Speedy due to the lack of NASA or Moon-related inscriptions on the case back. It is, however, fitted with the caliber 861 and no longer comes with a dot-over-ninety/diagonal-seventy bezel and an applied logo on the dial.

The 145.022-69 still features a stepped dial, which would disappear on the later 145.022-74. Its case back is still distinctively pre-Moon. There is no medallion in the center, just a seahorse, “Speedmaster”, and an Omega logo inscription.

During production, a new post-Moon version emerges with “The first watch worn on the Moon” written straight across the case back. These are referred to as “Straight writing” Speedies, as later versions would get a central medallion and curved writing around it. The misprint bezel does not occur on “Straight writing” Speedmasters, only on pre-Moon 145.022-69 references. More specifically, they are only found within the 30,589,000–31,000,000 serial range. 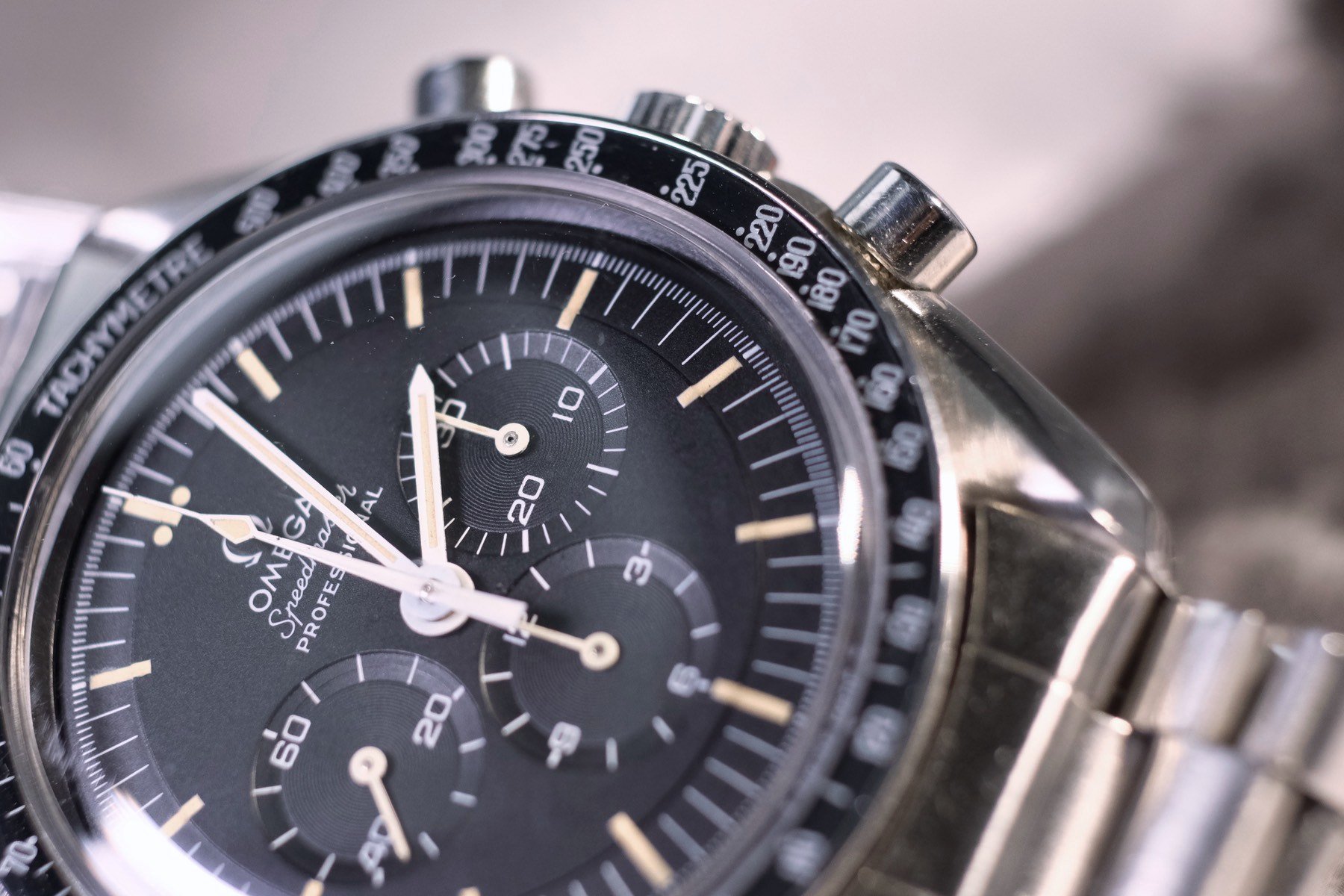 The 145.022-69 generation saw the introduction of a new bezel insert. It was the first to omit the grave accent in “Tachymètre”. Fromthen on, the bezel insert would feature the cleaner “Tachymetre”. Furthermore, the “dot over ninety” would now be positioned to the right of the ninety. The “diagonal seventy” — the dot diagonally positioned to the right of and below seventy — would become a dot “close to seventy”. It was now positioned just off the right side of the “0”.

It is reasonable to think that it was during this update that the mistake crept in. Early examples of the 145.022-69 with serials up to 30,588,000 were still fitted with dot-over-ninety/diagonal-seventy (DON) bezels. These still read “Tachymètre”. The misprint bezel is seen only in the serial range directly following. This means it is very likely that the very first bezels after the DON era were these misprinted bezels. 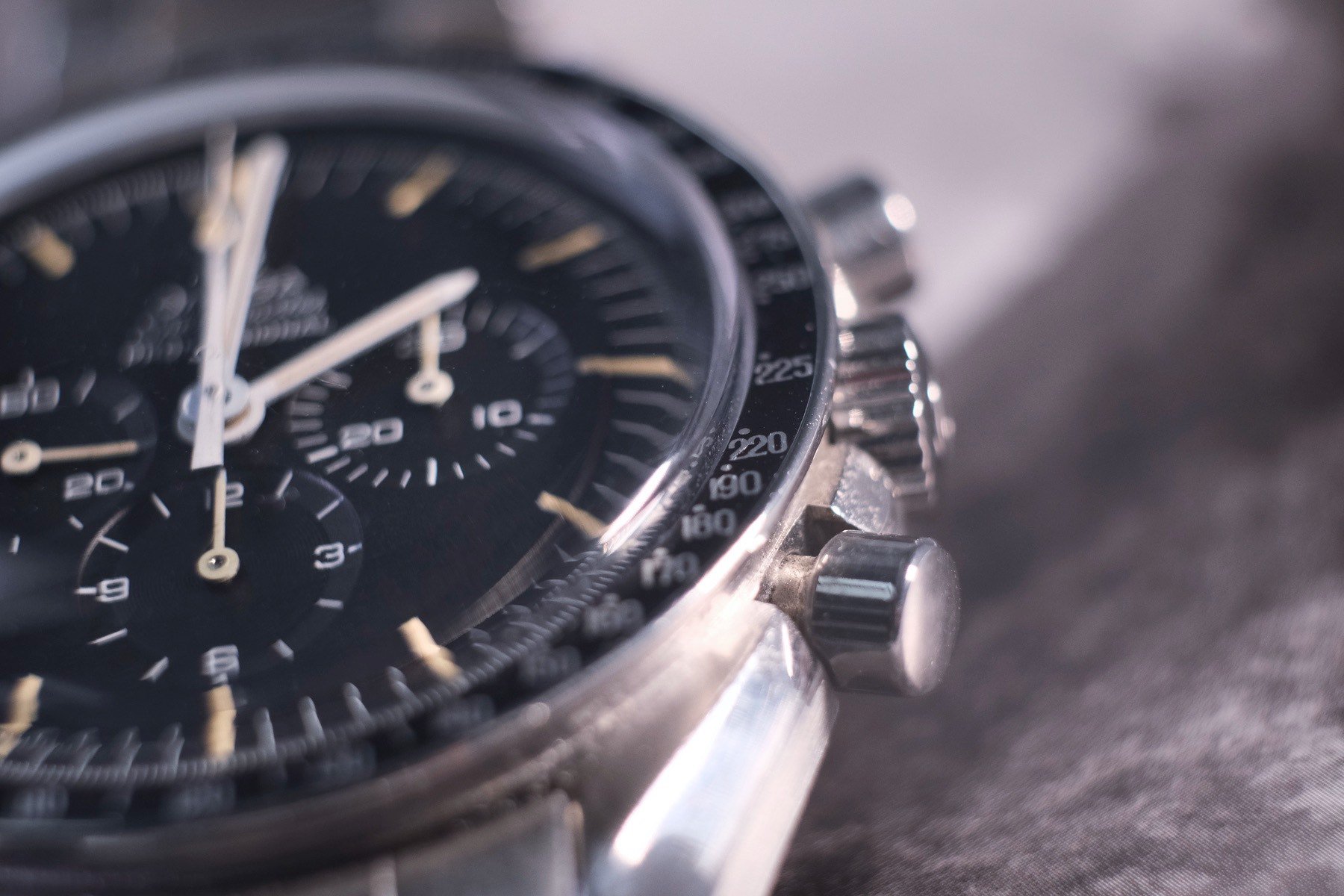 Collectability of the misprint bezel

The 220 misprint bezel is appreciated as an oddity. It is extremely rare for visible errors such as this to creep through the quality control of a major watch brand. Personally, I love it for the human touch it provides. It shows that these watches, in spite of all the R&D, are still made by normal people. Normal people with normal people flaws. I find that comforting.

When I bought mine a few years ago, there was a relatively small premium to be paid compared to the same reference with a normal bezel. I am curious to see how these will be regarded in the future. It really is quite fascinating that this could happen. And the misprint bezel marks an important point in Speedmaster history as the transition away from the DON bezel. It is a cool story at the very least. Add to that the rarity of these bezels, and you may have something very collectible on your hands.

The 220 misprint bezel — a space oddity if ever there was one.