The Omega Speedmaster Mk40 3820.53 is a bit of an oddball in the collection. Besides the Professional, Omega has always had a number of Speedmaster variations in the catalog since 1969. In the 1980s and 1990s, the Speedmaster Reduced was an alternative to the Moonwatch for those who wanted a smaller watch, one with an automatic movement, or simply a slightly more affordable choice.

Besides the Speedmaster Reduced, Omega also had the Speedmaster Racing series (with Schumacher and Andretti as ambassadors) and this Speedmaster Day-Date model. It’s a 39mm Speedmaster watch with the well-known lyre lugs and black tachymeter bezel. A self-winding movement (caliber 1151) provides the time, chronograph, and calendar functions. In those days, Omega wasn’t developing in-house movements and was using the ETA/Valjoux caliber 7751. It’s a full-calendar chronograph movement that ticks at 28,800vph and has a 42-hours of power reserve. These Speedmaster variations are 14mm thick. 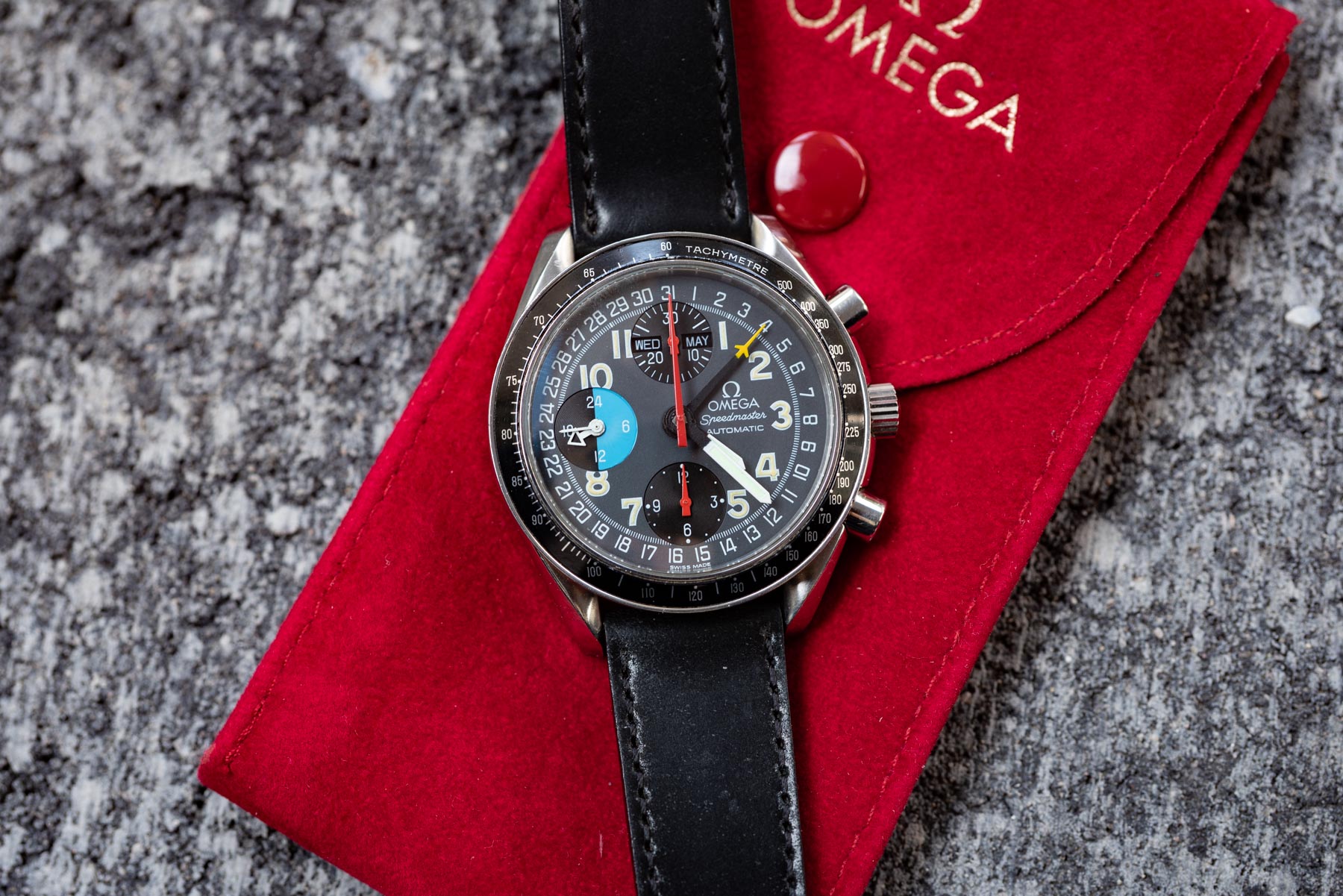 This Speedmaster came out around 1996 and was available with different dials. In 1997, Omega also introduced a version in rose gold with reference 3623.33. The most famous and popular execution is perhaps the Speedmaster Mk40 reference 3820.53 that we have here. On a steel bracelet, it’s the 3520.53. It’s an easily recognizable version thanks to its use of bright colors (red, yellow, white, and blue) for the hands and the sub-dial at 9 o’clock. The “Mk40” is a nod to the Mark series that Omega made from the late 1960s up till the mid-’80s. In the mid-’90s, Omega advertised this Speedmaster Mk40 3820.53 as “Michael Schumacher’s choice”, since the driver was an ambassador of the brand back then. 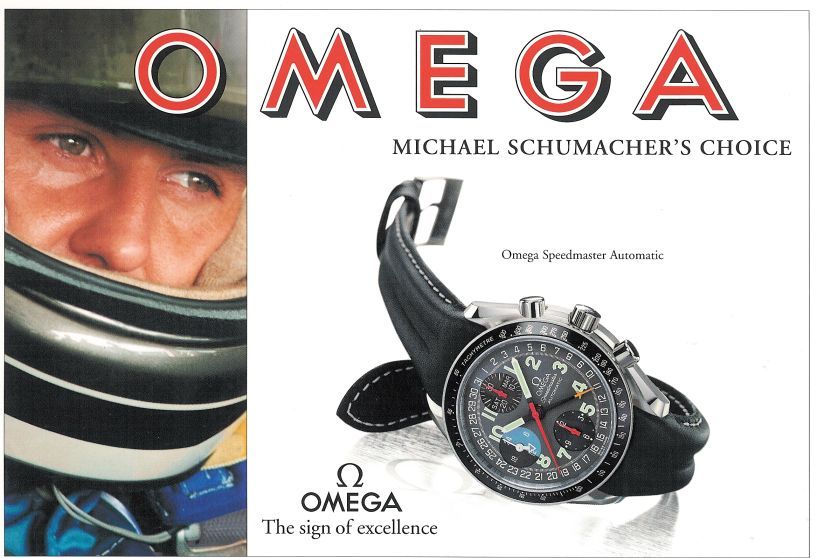 This particular watch belongs to my colleague Rob, who only recently added it to his Speedmaster collection. Now is a good moment to take an up-close look at the Speedmaster Mk40 3820.53. 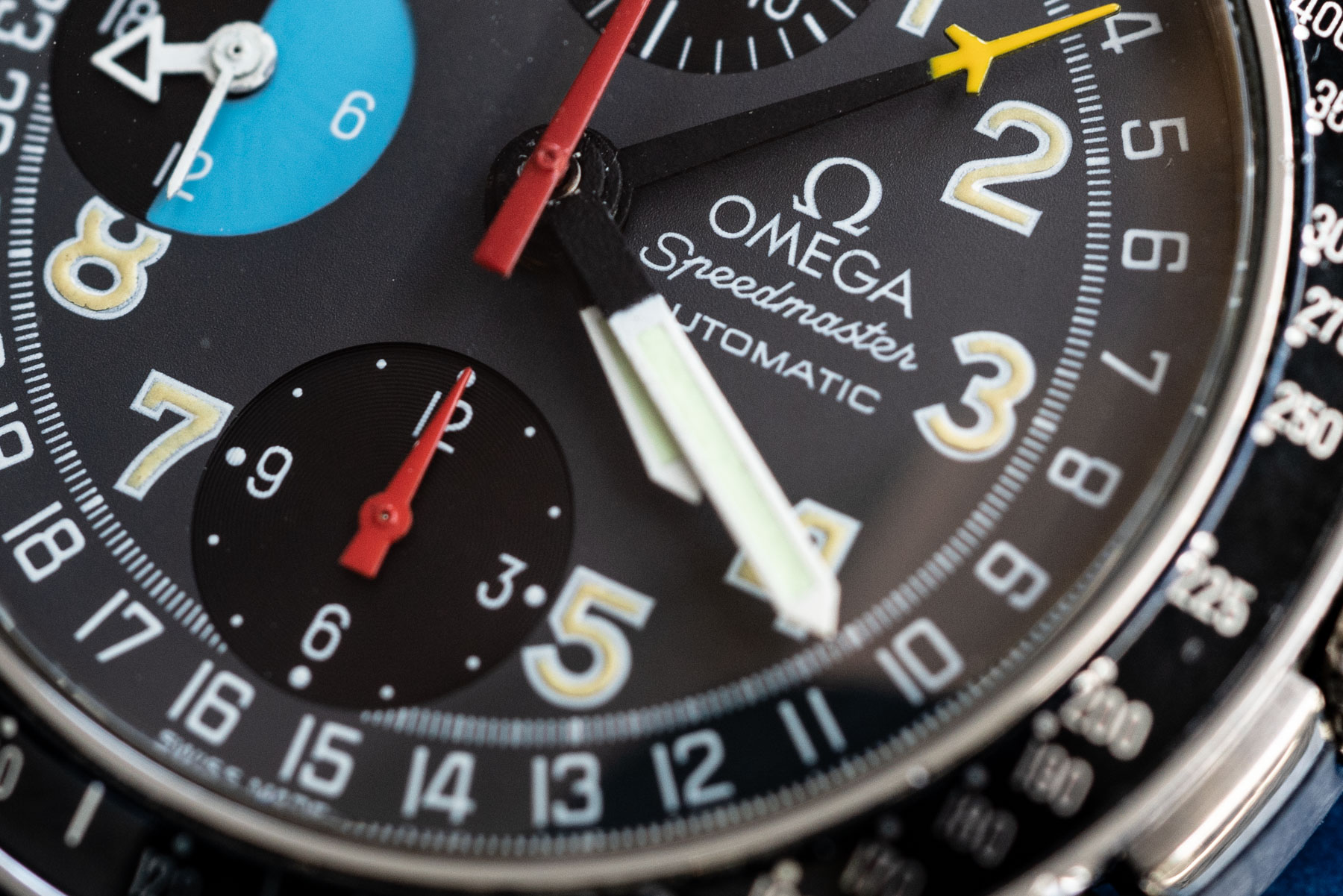 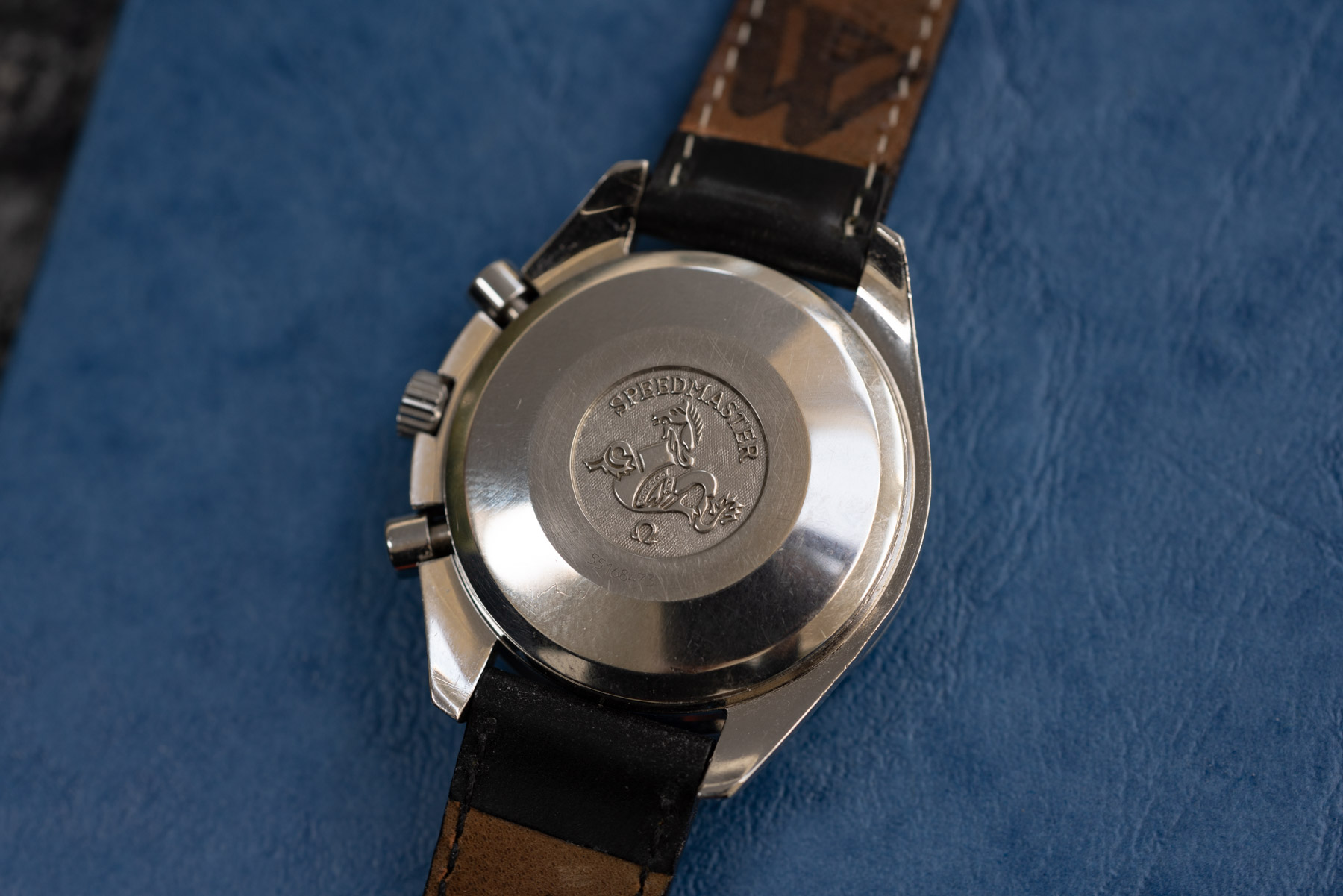 The case back of the Speedmaster Mk40

The Speedmaster Triple Date, or Speedmaster Day-Date, features the day, date, and month. The day and month are indicated via the apertures in the sub-dial at 12 o’clock, while the date is indicated by a central hand with a yellow “airplane” pointer. The chronograph seconds hand is red, and so is the hour-counter hand at 6 o’clock. And though the yellow airplane could make you think that it’s some kind of extra hour/GMT hand, it’s actually not. 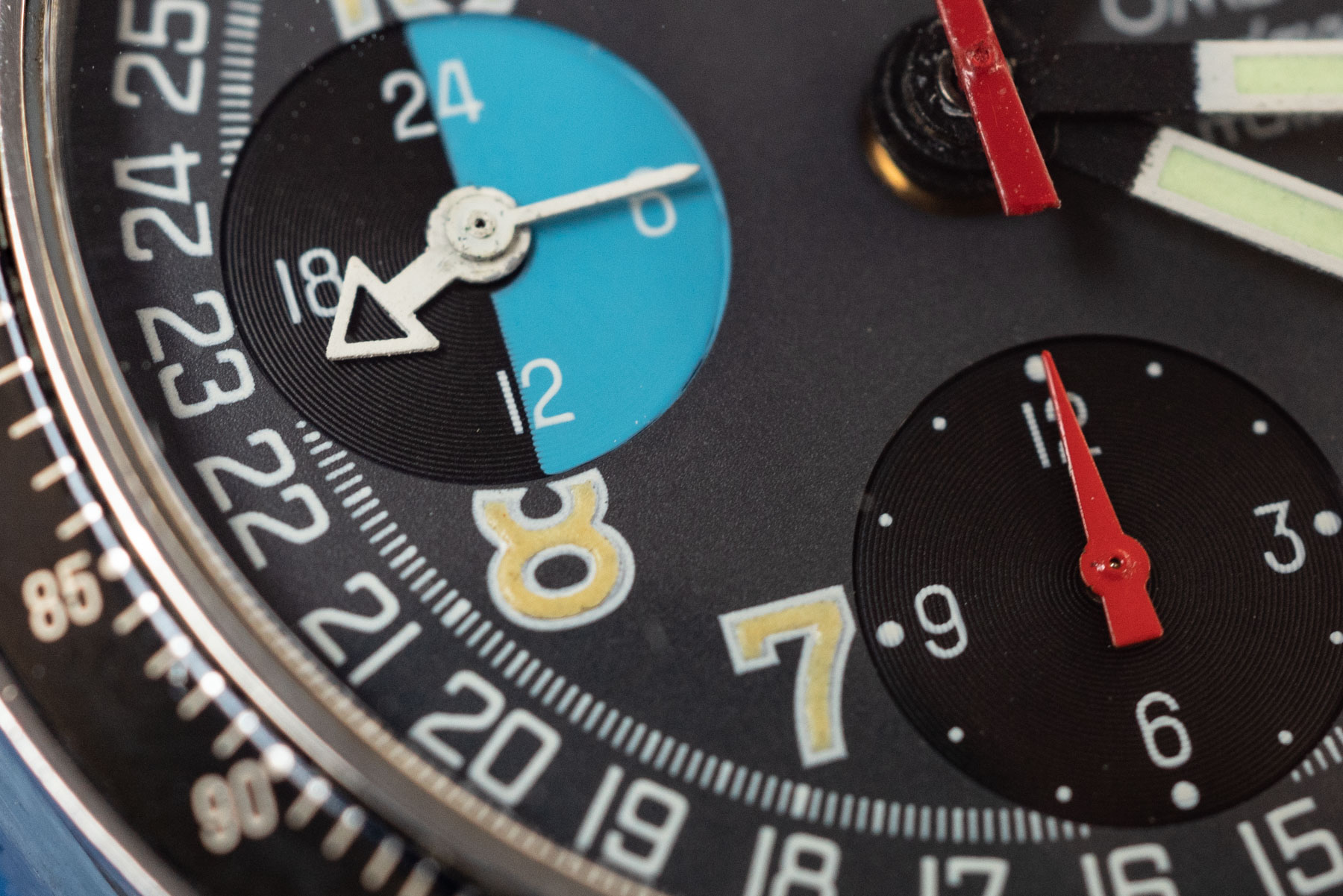 The interesting part, in my opinion, is the sub-dial at 9 o’clock. It shows the running seconds, as well as a day/night indicator with a 24-hour scale. A vertical line distinguishes A.M. and P.M., where blue is, of course, the former and black is the latter. It reminds me a bit of the Flightmaster with caliber 910, which has a similar 24-hour indicator but no running seconds. As I mentioned above, the Speedmaster Mk40 relies on the caliber 1151 for all of its functions. 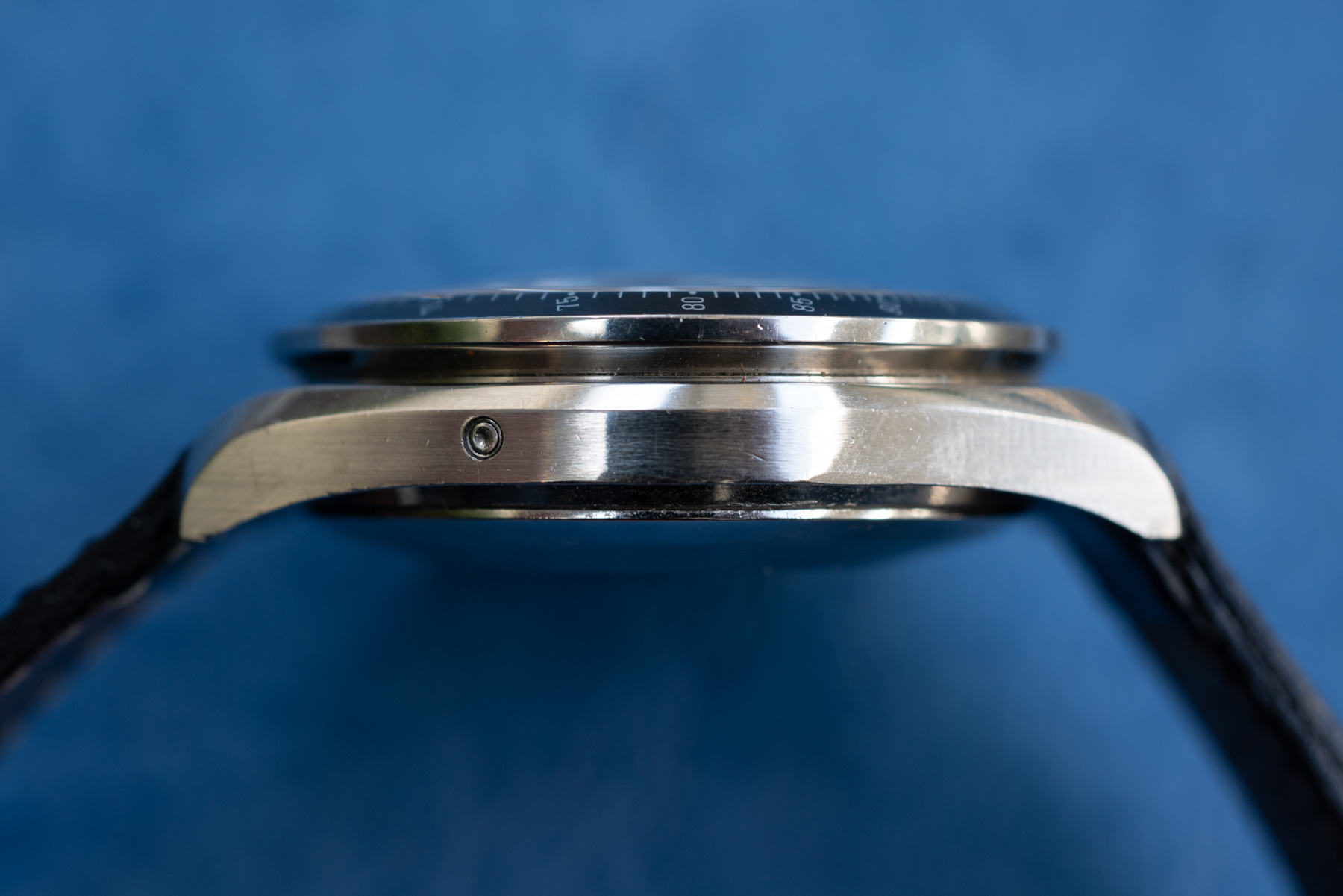 The corrector for the day indicator

Pushing the little corrector on the left side of the case advances the day. You can change the date by pulling the crown to position two and then turning it counterclockwise. The month will automatically advance each time the date hand passes 31. 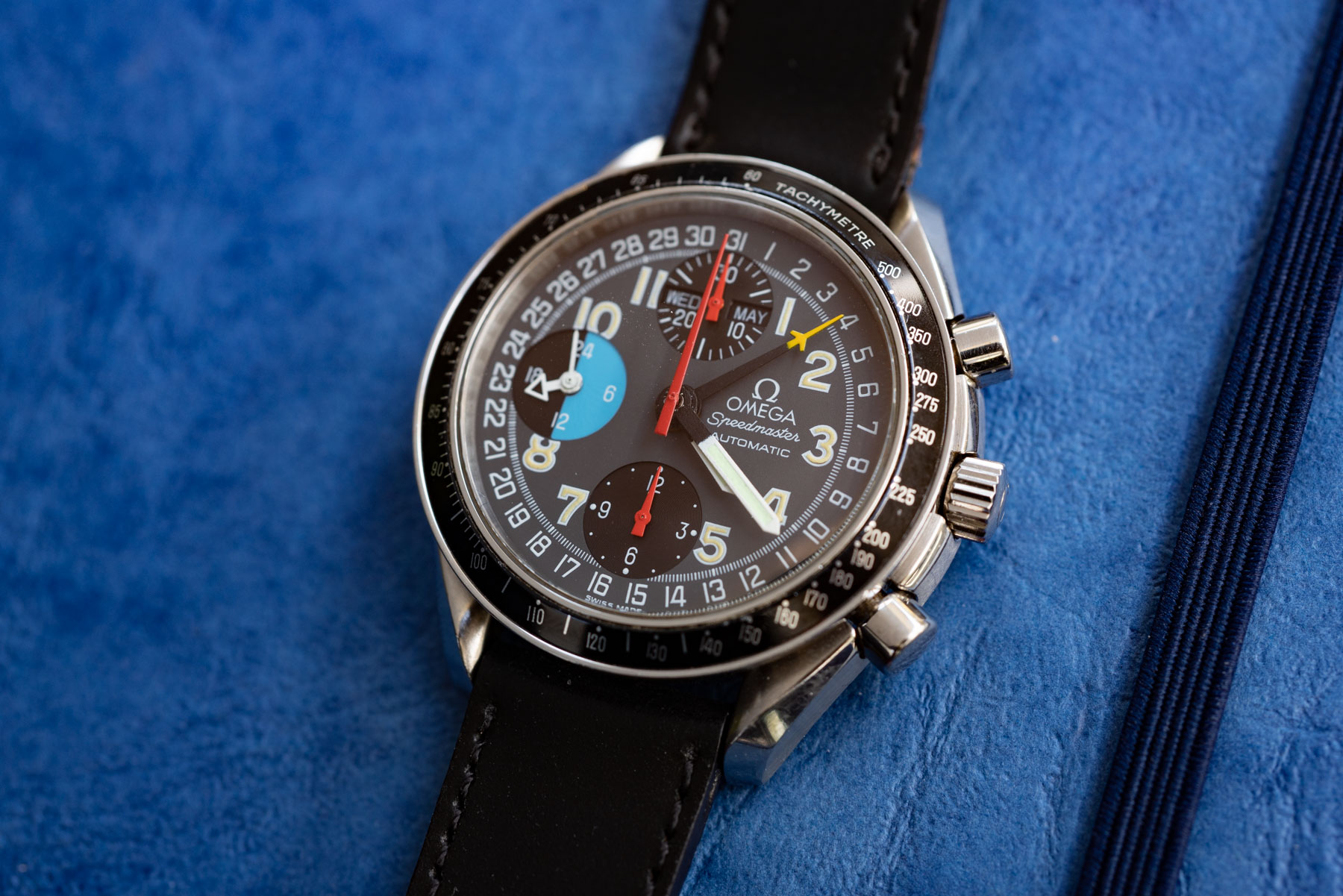 A few years after this model came out, Omega started using LumiNova for the hour markers and hands. Rob’s Speedmaster Mk40, however, is a tritium version. The tritium paint has turned this yellow-ish color, which matches nicely with the “airplane” date hand. Rob has his Speedmaster Mk40 on a leather strap, but they were also available on a stainless steel bracelet. 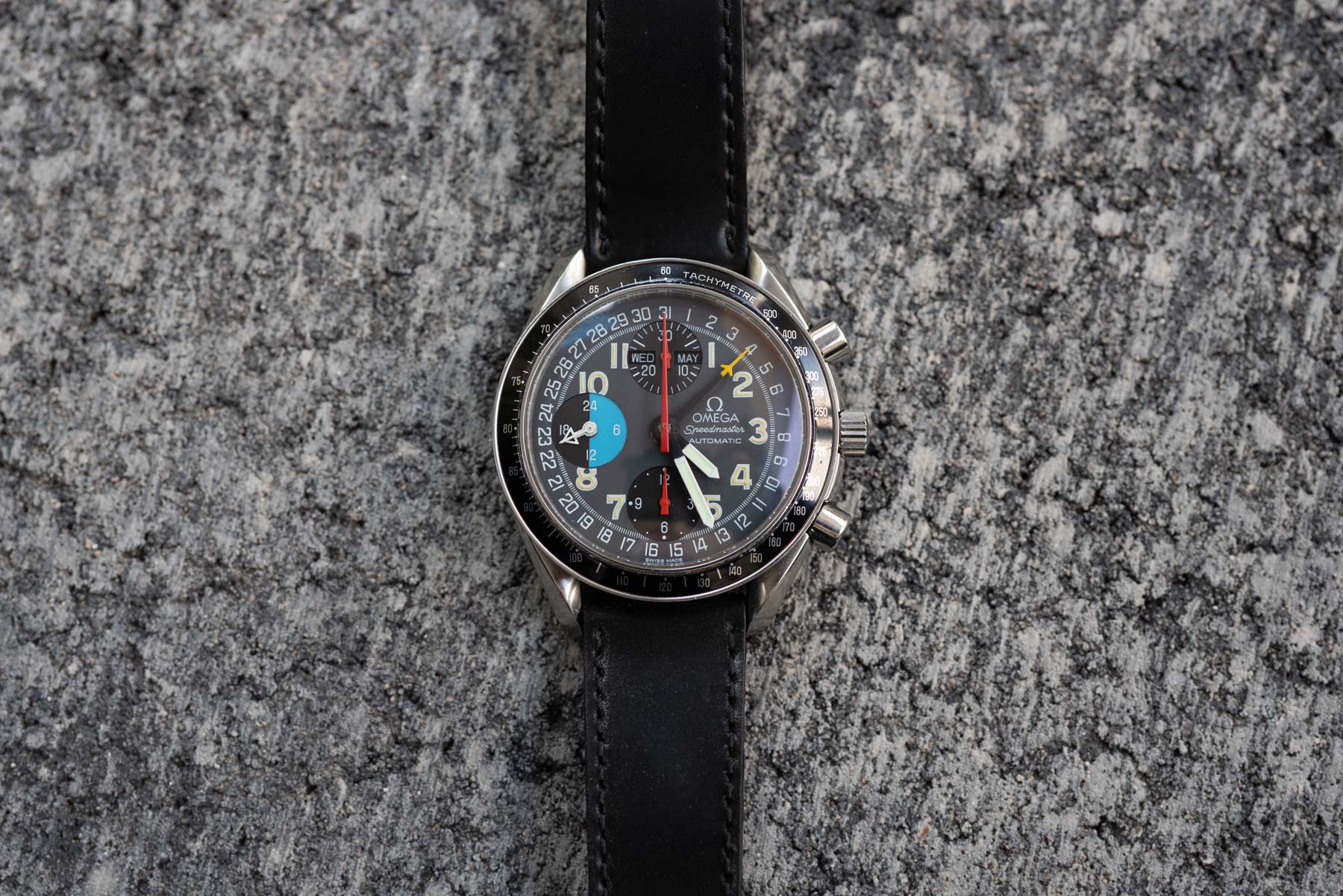 As you know, the prices on Omega Speedmaster watches have increased quite a bit in the past — let’s say — five years. These Speedmaster Mk40 watches used to be easily obtainable for under €2,000, but you can forget about that in today’s world. The average price on them now on Chrono24 is around €3,450. My tip would be to always source one with a stainless steel bracelet (3520.53). Then, you can always wear it on an 18mm strap if you prefer. This watch used to come in the (in)famous red leather Omega box, which was known for its ability to deteriorate after a few years. Only the later red leather boxes are better quality and actually stay in one piece. 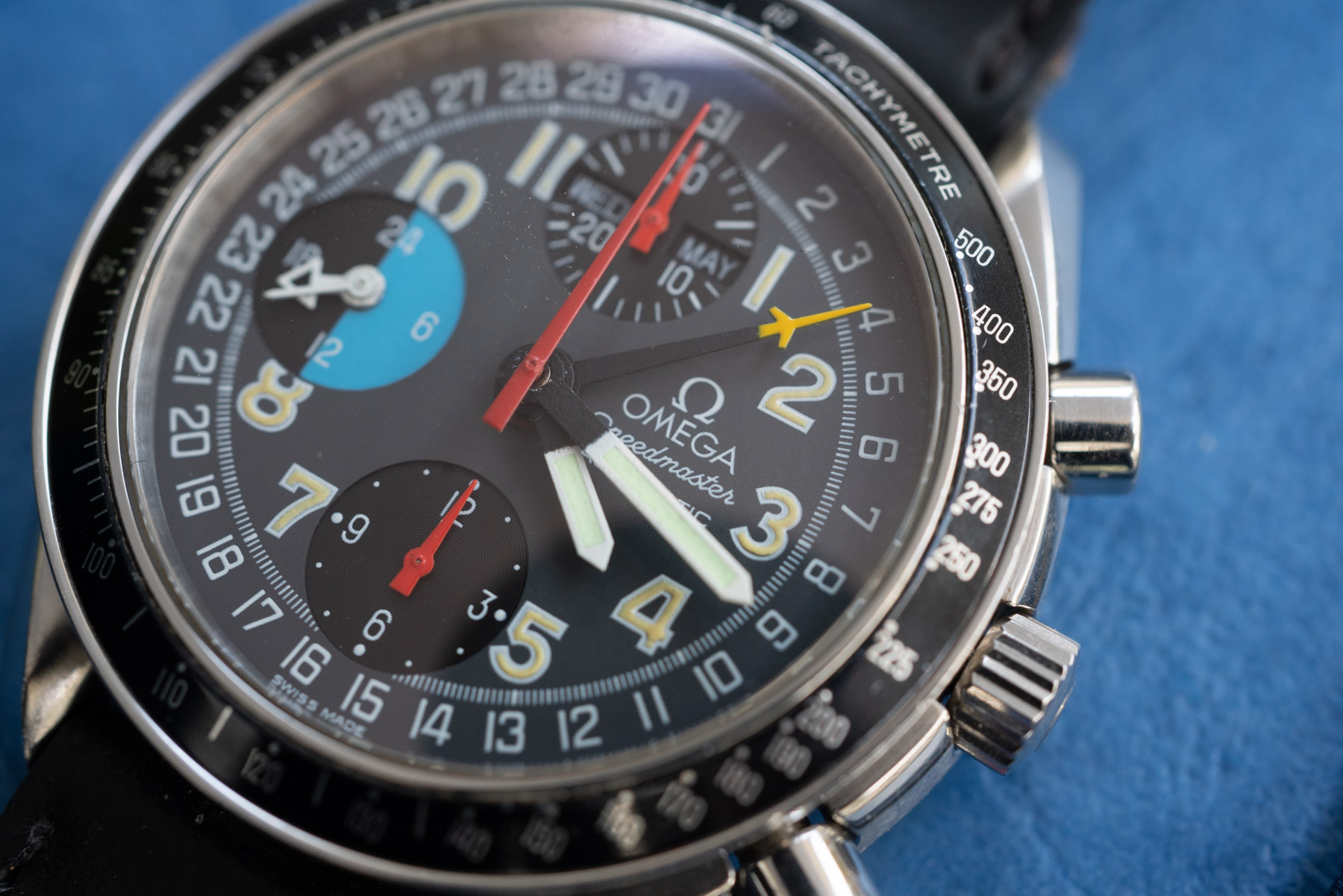 Despite the fact that this is not a Moonwatch and that it uses of an ETA/Valjoux 7751 movement, I don’t see the prices coming down on this model. On the contrary, if you fancy one of these, I would start looking for one as soon as possible. It’s good to keep in mind that Omega switched from tritium to LumiNova for this model in 1997 and 1998. Also, you might notice a difference in the minute markers on the dial. On the later dials, the minute markers are longer compared to the outer second’s track. This change most probably happened during the update to LumiNova. 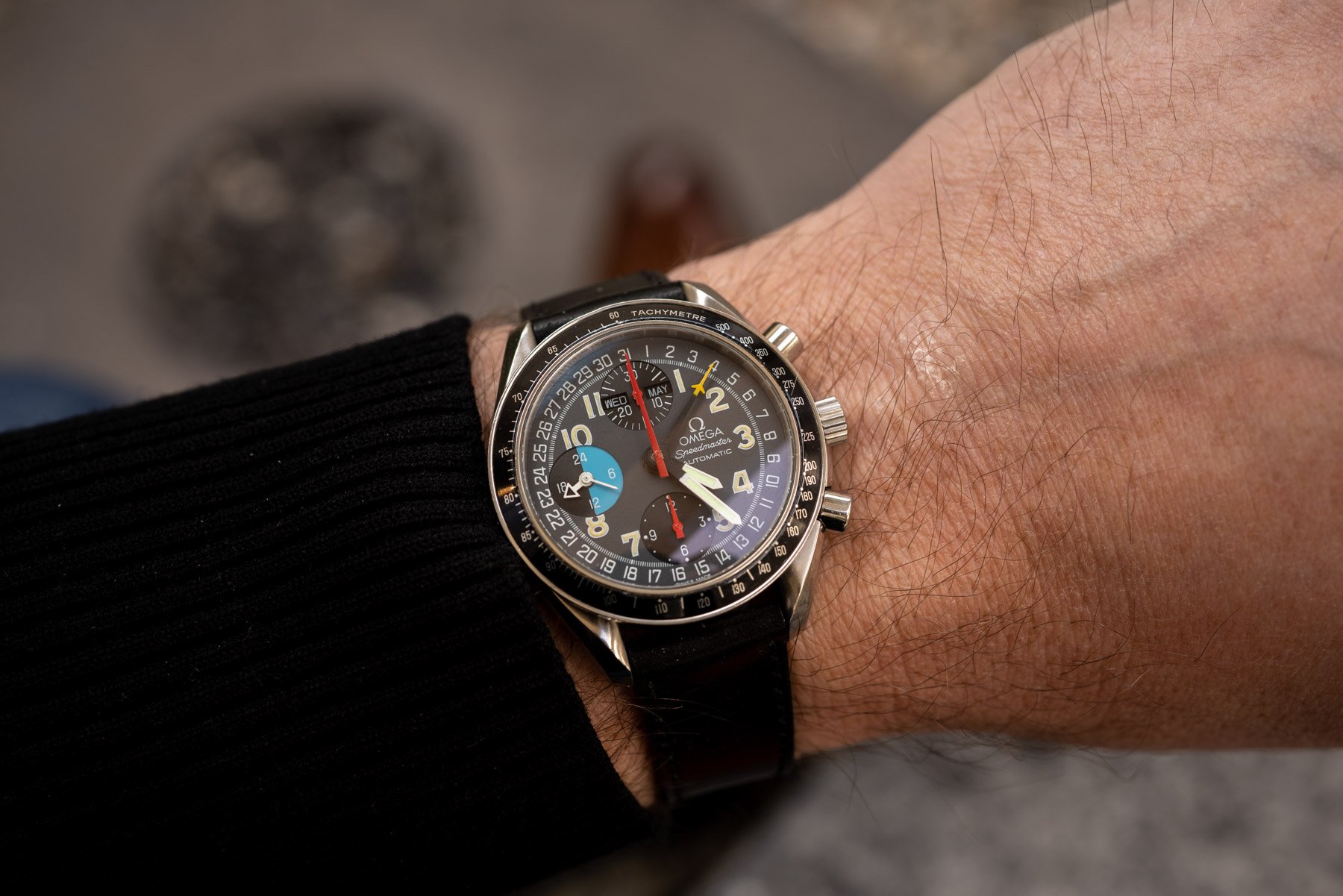 Getting yourself a colorful-dialed Speedmaster

Is the Omega Speedmaster Mk40 worth buying? As a Speedmaster collector, I would say yes. The 1990s are an interesting era for Speedmasters, both for the Moonwatch models with tritium dials (and display backs), as well for some of the variations that Omega produced. The Speedmaster Mk40 is definitely one of them. I have to admit that I ignored them for too long, but as of late, I’ve started to appreciate them more and more.

If you need to make a choice between this 3820.53/3520.53 or a Moonwatch reference 3590.50/3570.50, I’d still always go for the 42mm Moonwatch. However, if you already have your standard Moonwatch and are looking for some variation on the theme, this Mk40 might be a very good pick, especially if you like to have some colors on your dial. Compared to the (cheaper) Speedmaster Reduced, the Mk40 would be my pick for the color it brings to the dial and the extra complications.

Let us know what you think of the colorful Mk40 in the comments, and tell us what your favorite non-Moonwatch Speedmaster is too!