P1lot One Watch – A Forum Initiative

More than once, I’ve seen a watch that was specifically designed or made for members of a watch forum or community. Heck, we even did our own Fratello Watches timepiece together with Marvin a couple of years ago. This P1lot One watch is something special though, as it was also made by forum members.

Dutch watch forum horlogeforum.nl (with 4000 members) decided it was time for a special project. A watch for members only and also (partially) made by members. The design was done by member Teun van Heerebeek and his aim was to come up with a unique “Fliegeruhr”. The case and crown have been made by forum member Jan Binnendijk. The leather strap was crafted by another forum member, Remie Beijer and the watch roll is made by Rob Haaring. Hans de Ree was in charge of the project planning, communication and the funding process.

The movement used is a typical pilot’s watch movement, an ETA (Unitas) caliber 6498-1 with nice Côtes de Geneve finish on the bridges and perlage on the main plate. These movements are of course Swiss made, but at least supplied by Dutch watch manufacturer Pellikaan Timing. 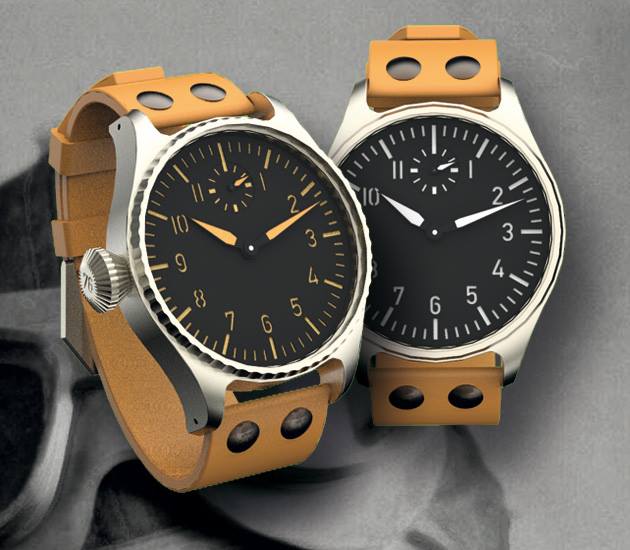 The P1liot One’s case measures 43 x 12 mm and is made of grade 5 titanium. Buyers could choose between a fluted bezel or a smooth bezel. The large (10mm) winding crown is also made of titanium in a diamond shape. One of the cool features is that it has the number of the watch engraved. Oh, and as you’ve probably seen already it is a “lefty”.

When I asked Teun van Heerebeek about the odd position of the seconds sub dial (placed at 12 o’clock) he responded:

“Besides the case, I also designed the dial of the watch. Normally, there is this triangle at 12 o’clock as an indicator. I decided to do it a bit different and used the seconds sub dial as a 12 o’clock indicator. This, of course, also allowed us to make it a lefty. An important feature, as the wearer – if he is wearing left – doesn’t have to deal with a big crown sticking into his hands anymore. These design elements are clearly part of the unique apparel of the P1lot One.”

Normally, projects like these cost a lot of money and we’ve shown you here on Fratello Watches a couple of micro brands in the last few months that used Kickstarter to do the funding. In the case of the P1lot One, the funding for the 52 watches only took a week’s time. It could be realized in such a short time because there was no commercial concern and of course because of the relatively low number of watches. Despite it is ‘only’ 52 watches for a forum with 4000 members (the number of active members is unknown at the time of writing), the project managers also had to say “no” to quite a high number of people who didn’t order during the time of funding. Teun explains: “I can understand that not everyone was willing to participate at first because there was no final product to show yet”. Compared to previous forum limited editions (by a.o. MeisterSinger), 52 is the highest number of watches ever sold (as a forum LE).

The P1lot One will be delivered in a beautiful watch roll and comes with a booklet that states the owner’s name, the number of the watch and specific edition that the owner received. Leather straps have also been engraved with the initials of the owner. The buyers could choose between four different versions, either one with a fluted or smooth bezel and then there was the choice between white or orange Super Luminova. The price of the watch was €499 Euro, including VAT.

On the 29th of March, the P1lot One will be officially released at Teuge Airport in The Netherlands.

Even though it is not possible to order this watch any longer, I thought it is quite an interesting project especially as the manufacturing process also heavily relied on some forum members. It might inspire other on-line communities to do the same perhaps.

Hot Topics
Introducing: The Omega Speedmaster Super Racing With Spirate System
165 comments
Design Vs. Specs — Which Is More Important To You When Buying A Watch?
87 comments
New Release: The Limited-Edition Seiko Prospex SLA067J1 Diver
62 comments
My Predictions For New Omega Speedmasters In 2023
57 comments
The Time To Buy Is Now: How The Current Economic Climate Influences Watch Buying And How You Should React
51 comments
Popular
(From The Archives) Shut Up & Read The Truth About Cartier Watches
George Cramer
21
Speedy Tuesday – The Original Omega Speedmaster Ultraman
Robert-Jan Broer
7
You Asked Us: Tissot Powermatic 80 Seastar 1000 or Longines HydroConquest
Robert-Jan Broer
20