Panerai has come a long way since its watches were first made available to the public in 1993. While the Italian powerhouse overawed the market with large, steel watches with hand-wound movements, Panerai has turned into a highly innovative Swiss manufacture.

Last year, Panerai was one of the few watch brands we were able to meet in person (during the Geneva Watch Days in August). And the staff of the brand’s Geneva boutique had a lot to show us, as Watches & Wonders (the successor of SIHH) was only done digitally. Now, I love a lot of things digital-only, but discovering new watches is something I would always rather do in the real world.

One of last year’s Panerai novelties is this Panerai Luminor Marina Carbotech in 44mm, reference PAM1661. Panerai sent us a PAM1661 to give it a try, and so I did. 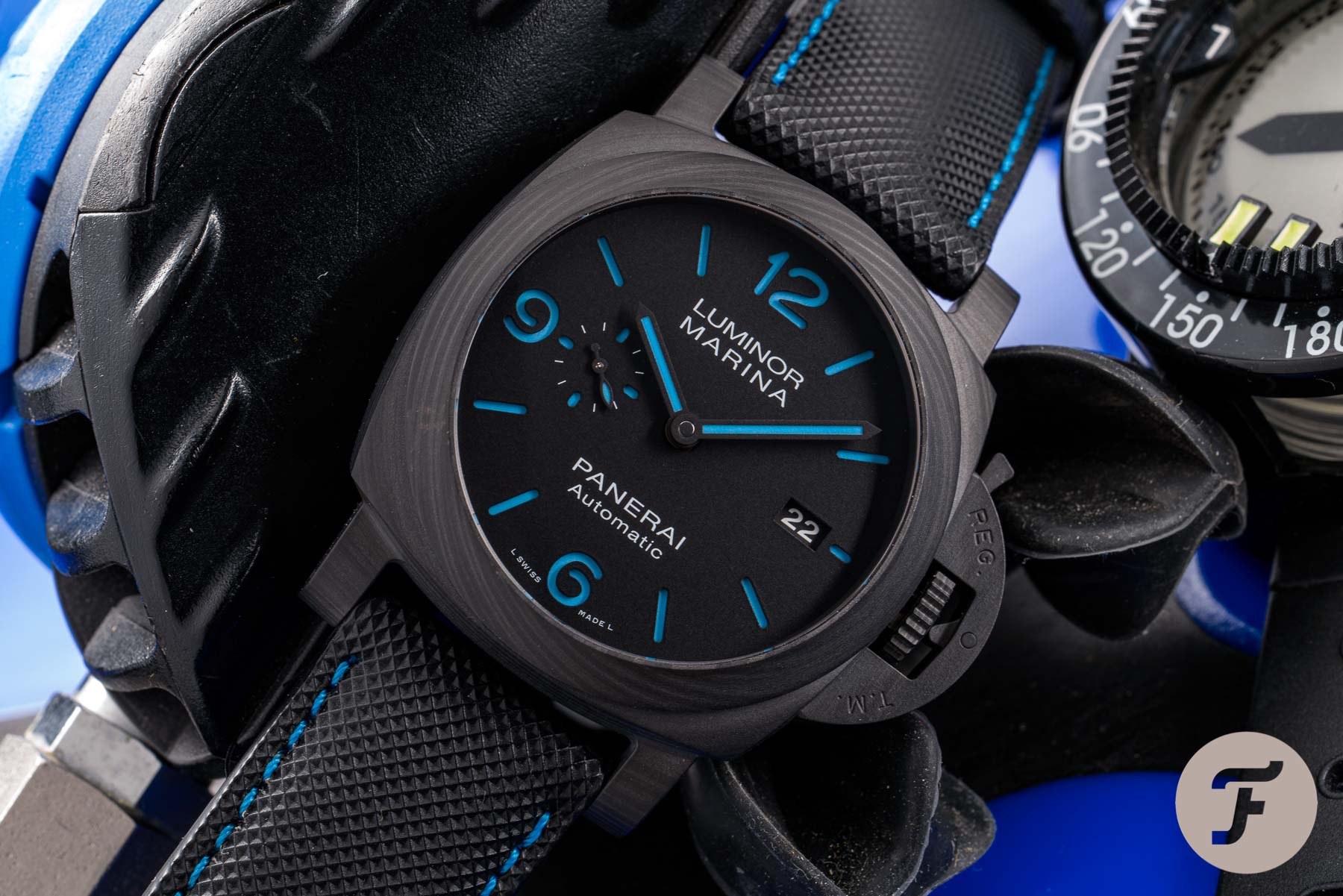 The PAM1661 might look familiar, and that’s because it is heavily inspired by the LAB-ID PAM700 introduced during SIHH2017. I remember being there during the press presentation and was amazed by the promise Panerai made: a 50-year warranty. It was carbon inside and out, there was almost no lubrication on the movement parts, and there were lots (lots) of silicon components. 50 pieces were to be made. Each would be priced at €50,000. It seemed unusual at the time, but how well has this concept aged? 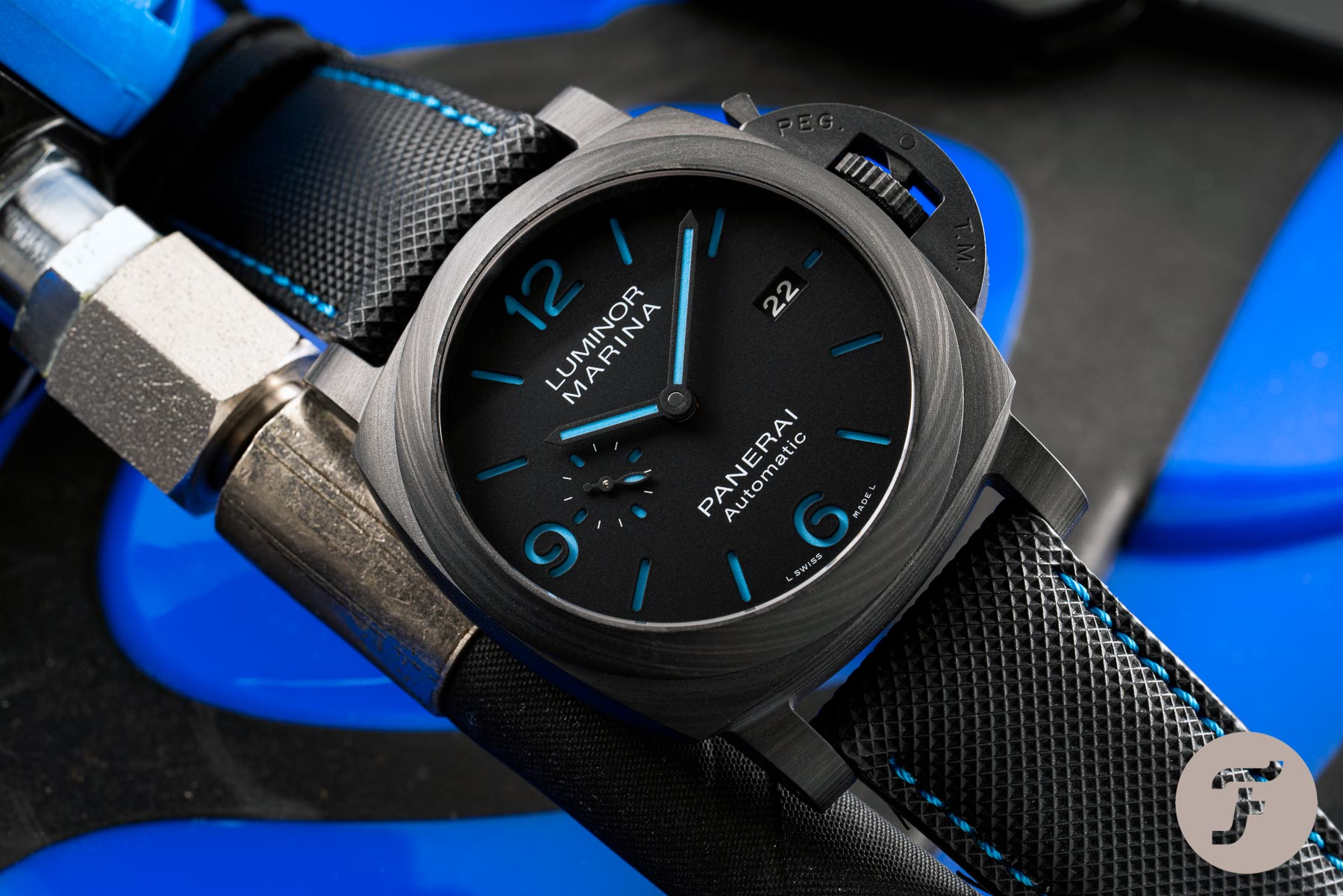 Every brand needs its show-off piece. It is necessary to show you what the brand can do, what it aspires to, where its limits lie. Think of Audemars Piguet’s concept watches, Piaget’s Altiplano Ultimate Concept, or Omega’s Seamaster Ultra Deep. Some of these models will see daylight, others won’t. Some will receive a spin-off that actually will go into production and hits the open market. The Panerai Luminor Marina Carbotech PAM1661 is a watch that can be seen as a spin-off of that PAM700.

The PAM1661 is a watch that has this small trace of “concept”, but it’s mainly just a very wearable watch for every day. It actually felt good to put a 44mm Panerai Luminor on my wrist. It has been too long. I’ve had two Panerai Luminor (Marina) watches in my own collection in the past, and every time I try a new Panerai watch, I kind of regret selling them. They were cool, versatile — despite the size — and fun to wear. I even attended a few Paneristi gatherings. They are always full of interesting, incredibly knowledgable brand fans. 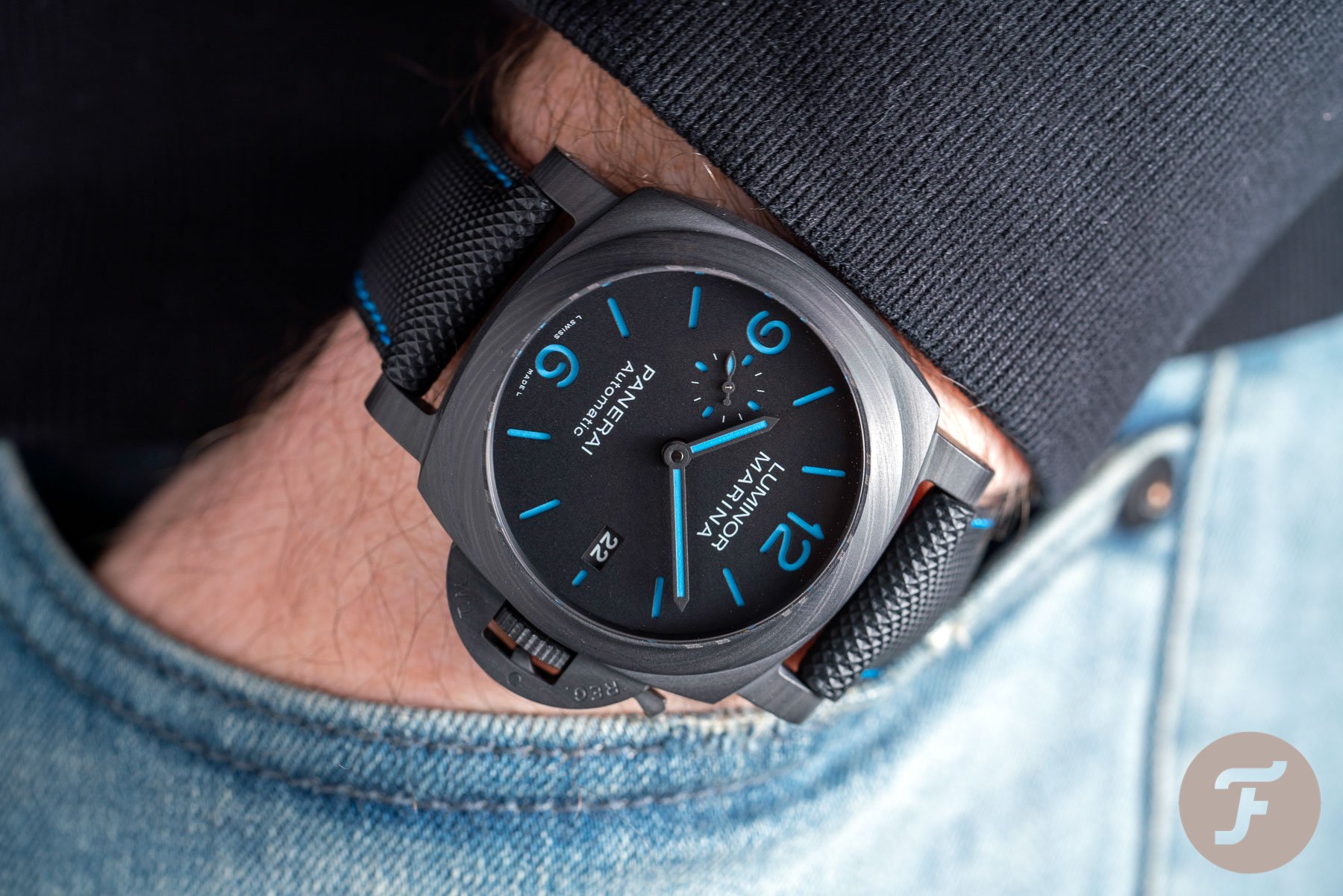 When the PAM1661 was introduced in early 2020, Rob did a rundown on all the technical innovations of this watch. You can read it here. In short, this watch has a Carbotech case. And yes, that’s a Panerai trademark. It is a composite material developed by Panerai’s Laboratorio di Idee and has technical and aesthetical advantages. With regards to the technical advantages, it’s lightweight, hypo-allergenic, and won’t corrode.

When I had a few Panerai watches in the past, 44mm was still considered big. Perhaps it still is considered big, but I wear it well on my 19cm wrist. Often, it has to do with the shape of the watch and — of course — the lug-to-lug size. I like how the PAM1661 wears, and perhaps it is due to the dark color of the case, but it doesn’t strike me as a large watch. 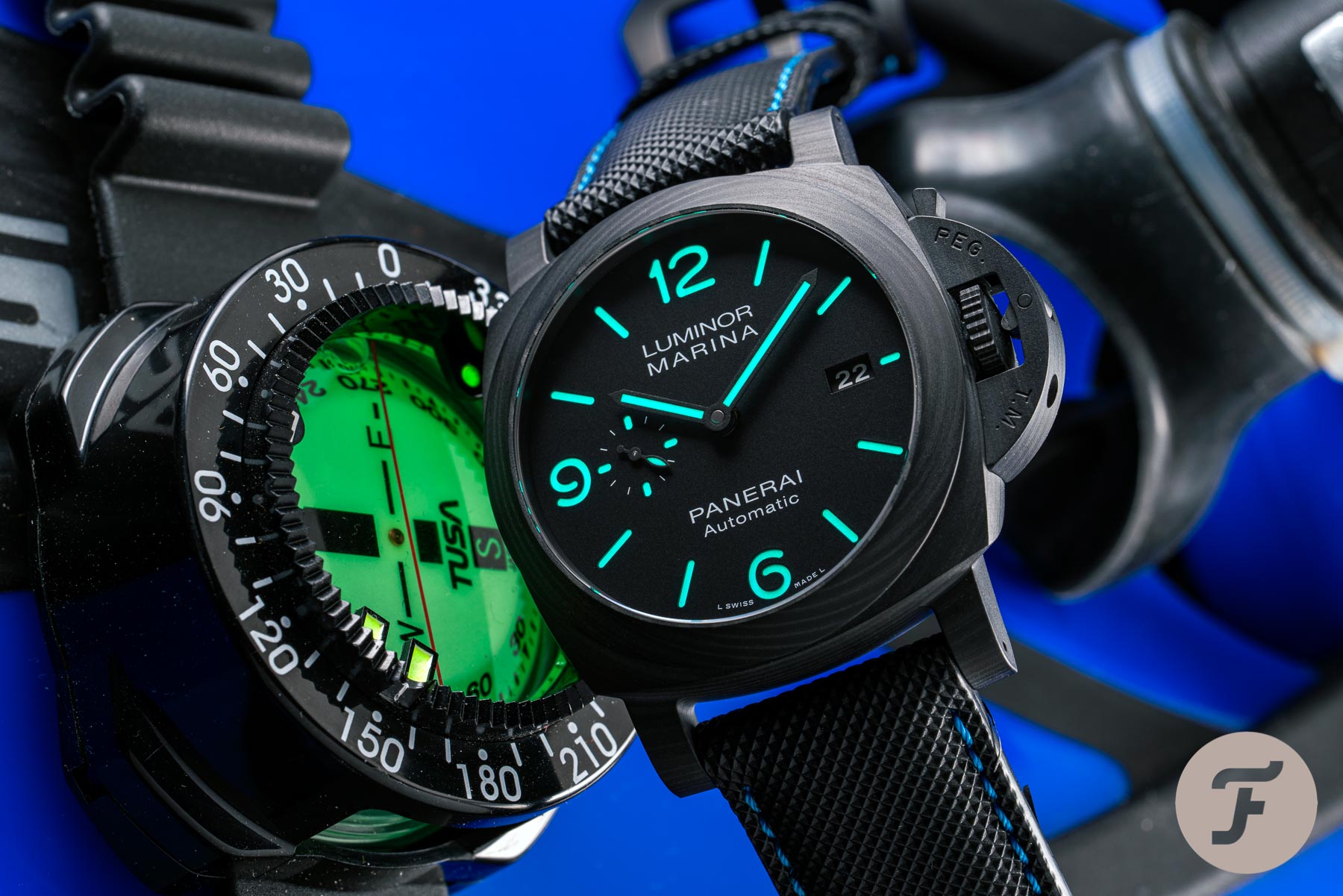 What I disliked about the LAB ID PAM700, has been fixed for the PAM1661. The hands. Where the PAM700 has oversized skeleton hands, the hands on the PAM1661 are straight lume filled hands, as we’d expect to find on the other Luminor models. What remains is the combination of black and blue. The writing on the dial is all in white, which gives a good contrast.

The PAM1661 has a sandwich dial, using a very neat blue color. The same color can be also found in the stitching of the black strap. I could have done without the relatively small date aperture. But that applies to almost any watch I get to try these days, I just don’t fancy them. I have been thinking if it were better to have blue printing on the date disc, but I realized that it will probably have a very negative effect on its readability. 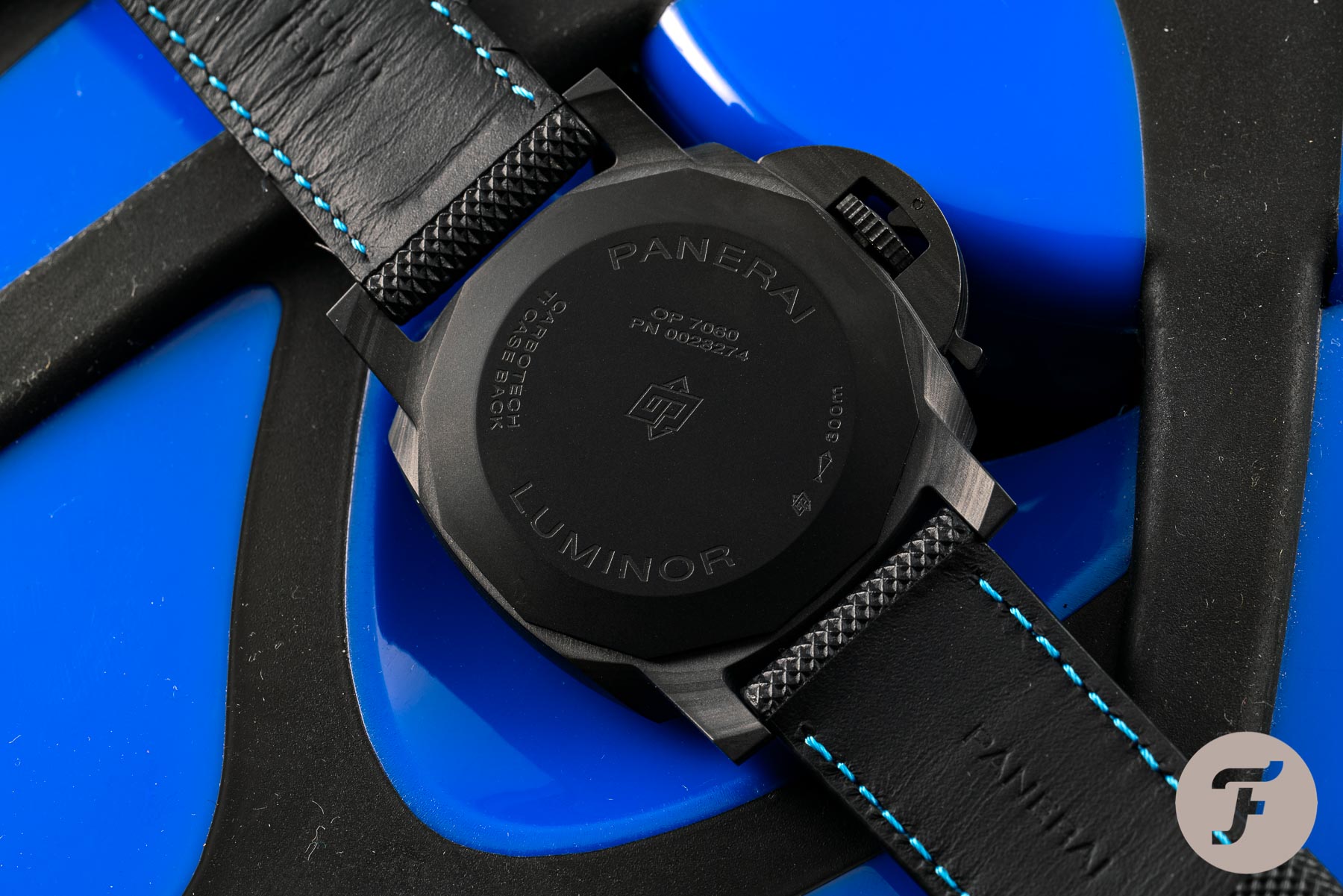 Inside the Luminor Marina Carbotech PAM1661, there’s the automatic caliber P.9010 movement. It is an in-house developed movement that consists of 200 components (including 31 jewels) and offers a power reserve of 72 hours. When I visited the Panerai manufacture in Neuchatel a few years ago, I was quite surprised to see how much effort and energy the brand invests in testing its movements.

Especially at the time, this was not really advertised. Rather, the brand focused on communicating its history. But in the manufacture, it was clear that the R&D team does more than they tell. On the one hand, it is a pity their movements don’t receive more attention. But, on the other hand, it seems that Panerai isn’t bothered by it and rather demonstrates its use of innovative materials. Unfortunately, the caliber P.9010 is not visible, as the DLC-coated titanium case back remains closed. 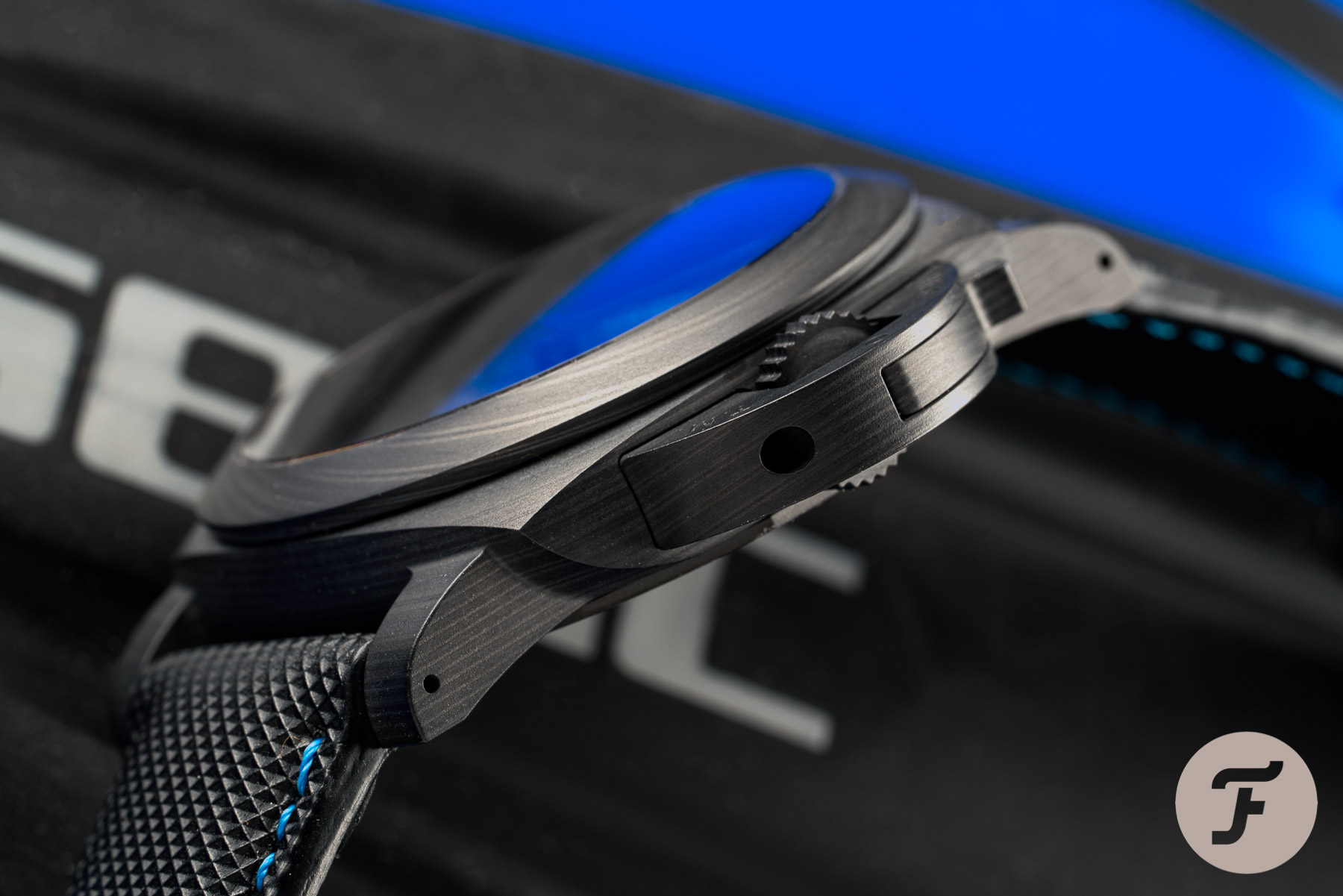 You can set the time (and date) with the crown. As you know by now, Panerai uses this special crown mechanism. You have to pull the lever first, then pull the crown and set the time and date.

Black watches and I aren’t the biggest friends. I’ve tried in the past, like a Sinn 142St.S for example, but it is not for me. It is also what makes me reluctant to add a Speedmaster Dark Side of the Moon to my Speedmaster collection, for example. But, I have to say, just like the Dark Side of the Moon, the Luminor Marina actually does look really good in black. When wearing this Panerai for a week or so, the color of the case actually didn’t disturb me as much as I thought it would do. A Panerai is also one of the few brands that my wife can get really enthusiastic about (she’s not into watches). 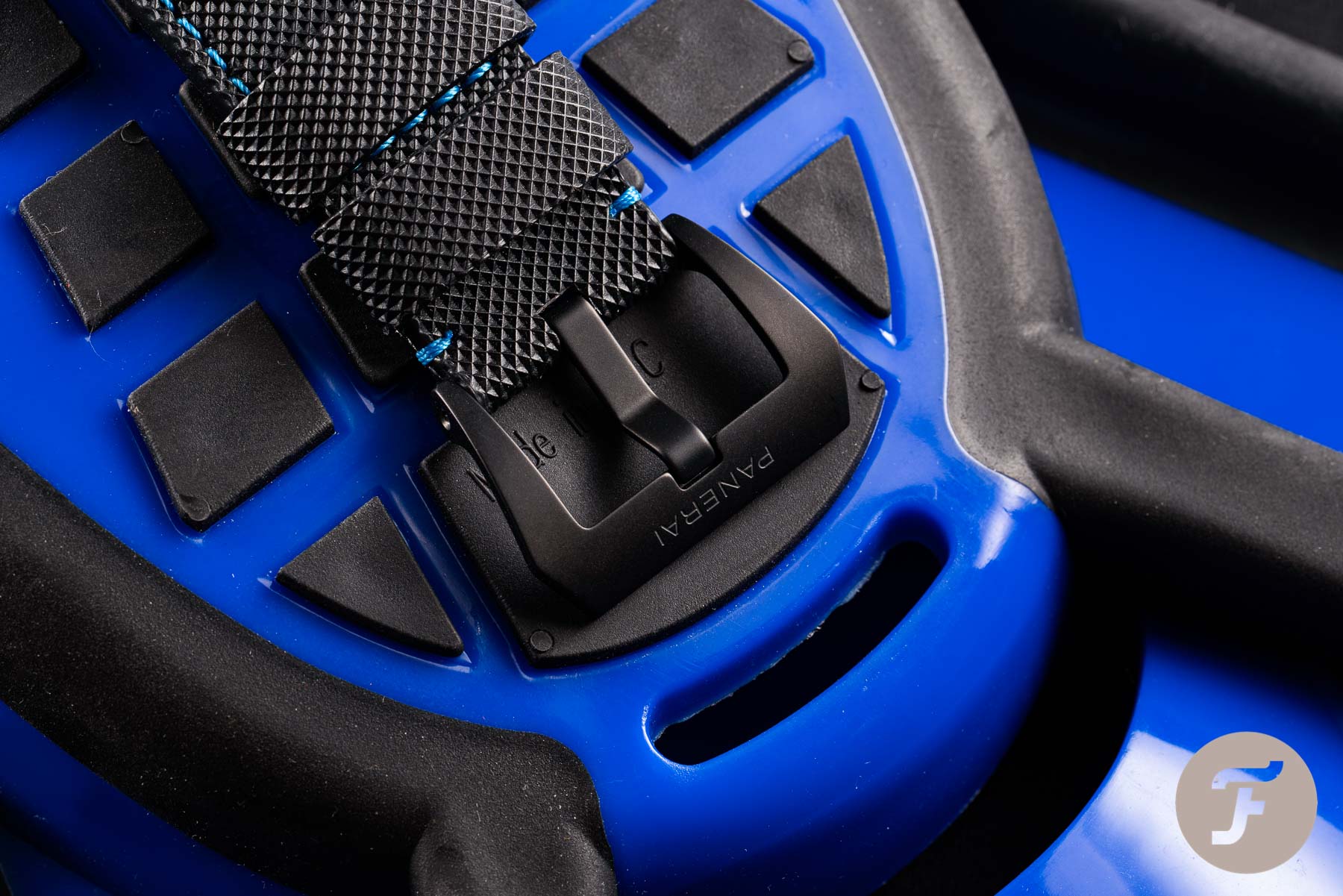 The Panerai PAM1661 comes on this Sportech (rubber-like) strap. As written above, it is black with blue stitching and has a leather lining. It is a very comfortable strap and comes with a big Panerai buckle in DLC-coated titanium.

Weighing in at just 92 grams in total, the watch is very light. Sure, there are watches that are lighter than the PAM1661, but 92 grams for such a large watch is definitely impressive. Personally, I keep coming back to the most basic Luminor models, like the PAM00774. Give me a steel, two-handed watch with a hand-wound movement any day — that’s my preference. But it isn’t the same for everyone… 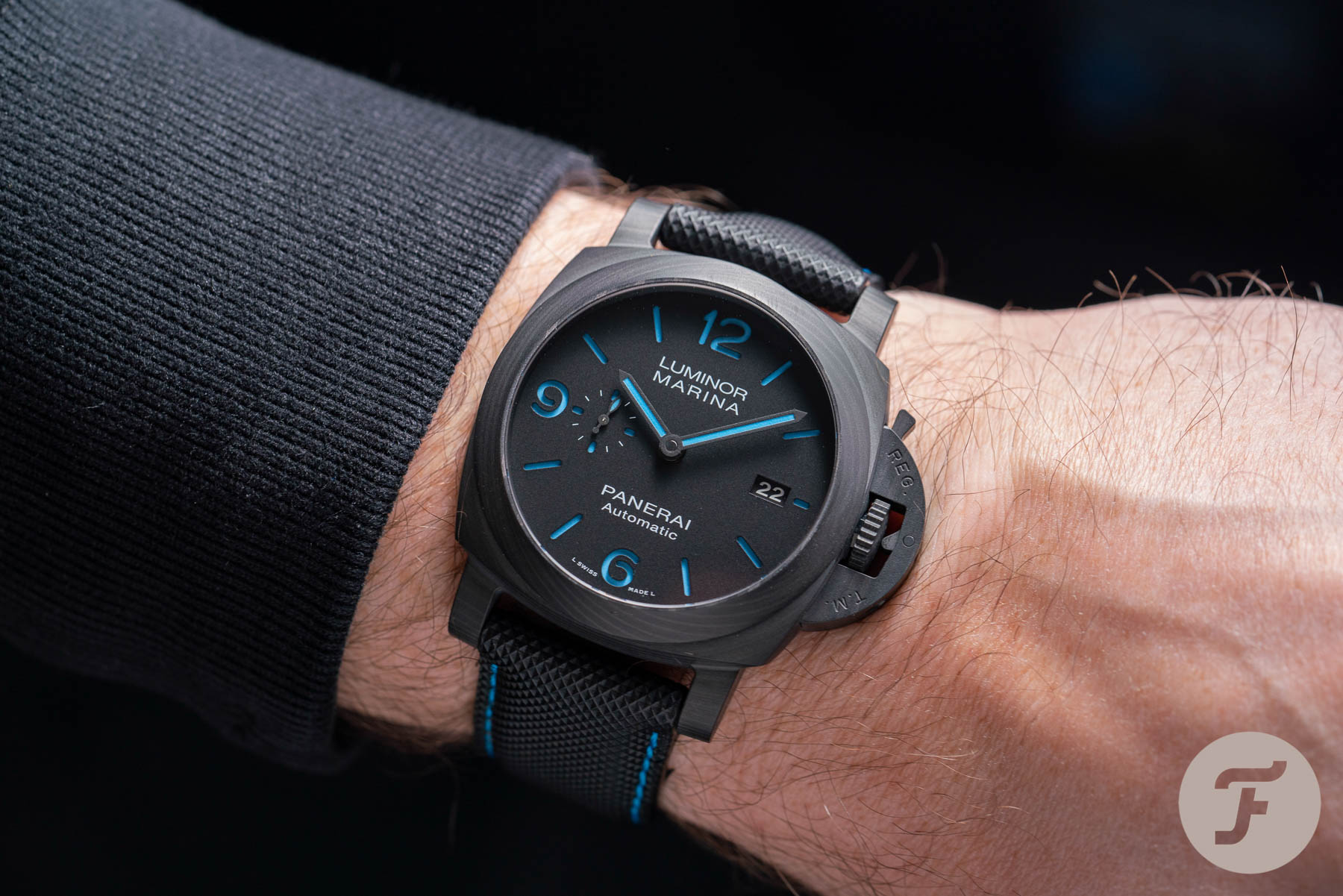 But, if you’re into really technical watches when it comes to materials, the Panerai Luminor Marina Carbotech PAM1661 might tick a lot of boxes. And let’s not forget about it’s powered by an in-house manufactured movement with a 3-day power reserve.

The price of the Panerai PAM1661 is €12,500 including taxes. It is interesting to note is that Panerai offers 8 years of warranty, after registration.