It's a sexy watch, but should you buy it?
Rob Nudds
comments 13
Share

Are you tired of ambassador-led special editions? Well, it sure seems as if the watch industry isn’t done with them quite yet. And while this practice may elicit (in some) a weary roll of the eyes, it is fair to say there are good and bad examples of ambassador-inspired watches. The partnership twixt Panerai and Mike Horn has always felt like one of the more natural ones. Perhaps that has something to do with its duration, Horn’s earnestness, or the fact there aren’t so many Panerai ambassadors to dilute the attention afforded the increasingly renowned explorer.

Whatever it is, whenever Panerai releases a new “Mike Horn” watch, I find myself liking it. It’s totally possible it’s just a coincidence. After all, there haven’t been thousands of variations. But the more shots the brand takes, the higher the chances are of missing on a few. Thankfully, it seems here that Horn and Panerai’s design team have kept their powder pleasingly dry. They’ve pulled the trigger on just one or two flashes of interest that bring the new PAM01291 to life without muddling the message. 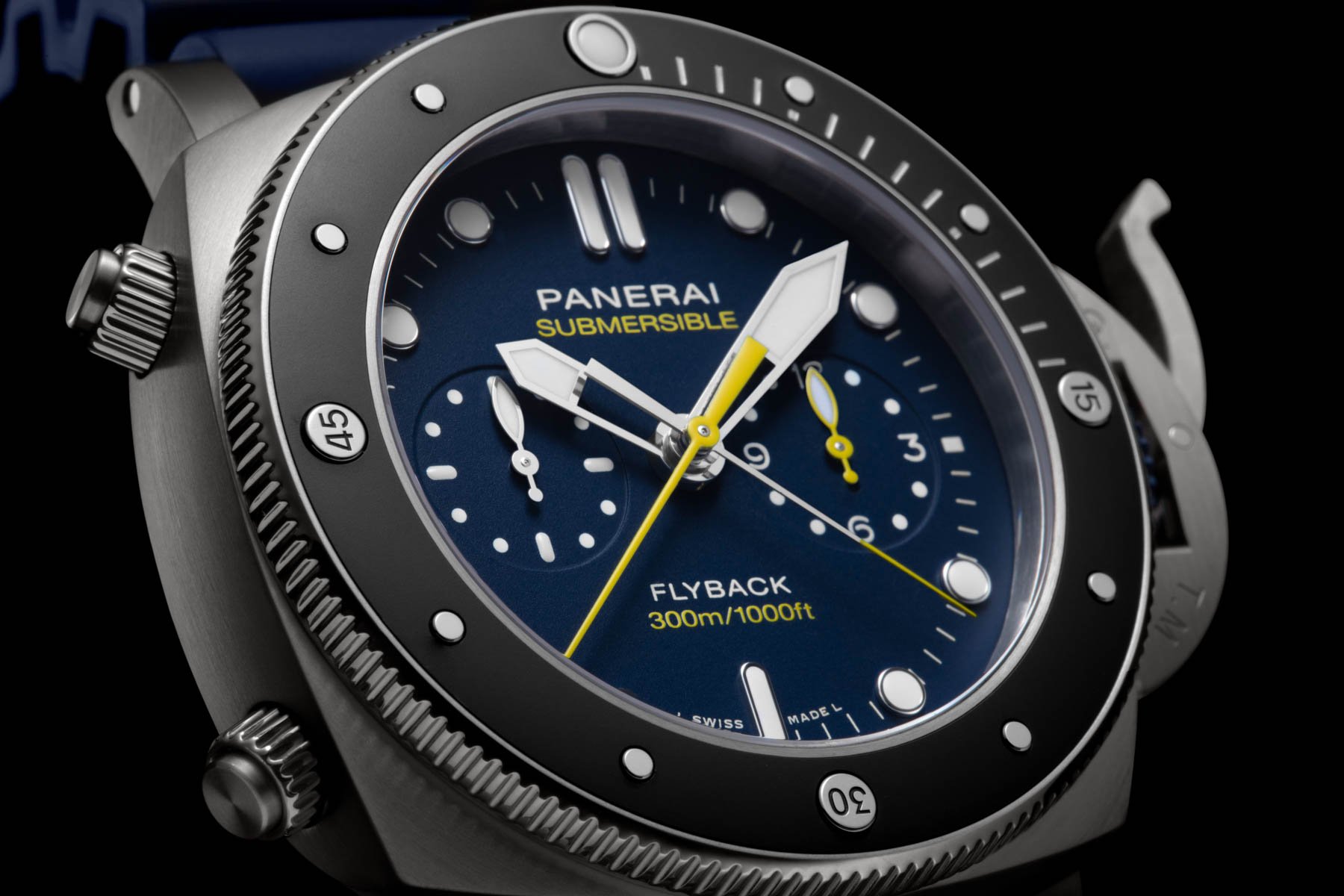 Simply put, this is a very handsome, dark blue-dialed watch with sporty yellow accents. This is a colorway that seems to be getting a fair bit of love right now (I’m thinking, of course, of the IWC we reviewed here). As a member of the Submersible family, this watch packs a serious punch in the technical department. The PAM01291 is a 47mm wide behemoth, which wears every inch of its hulking diameter due to the iconic cushion-shaped case of Panerai taking no prisoners. While you might be surprised at the wearability of the seldom-seen 42mm Luminor Submersibles, don’t go into this pairing blind. If you’re not ready for it, this titanium beast will consume your wrist. 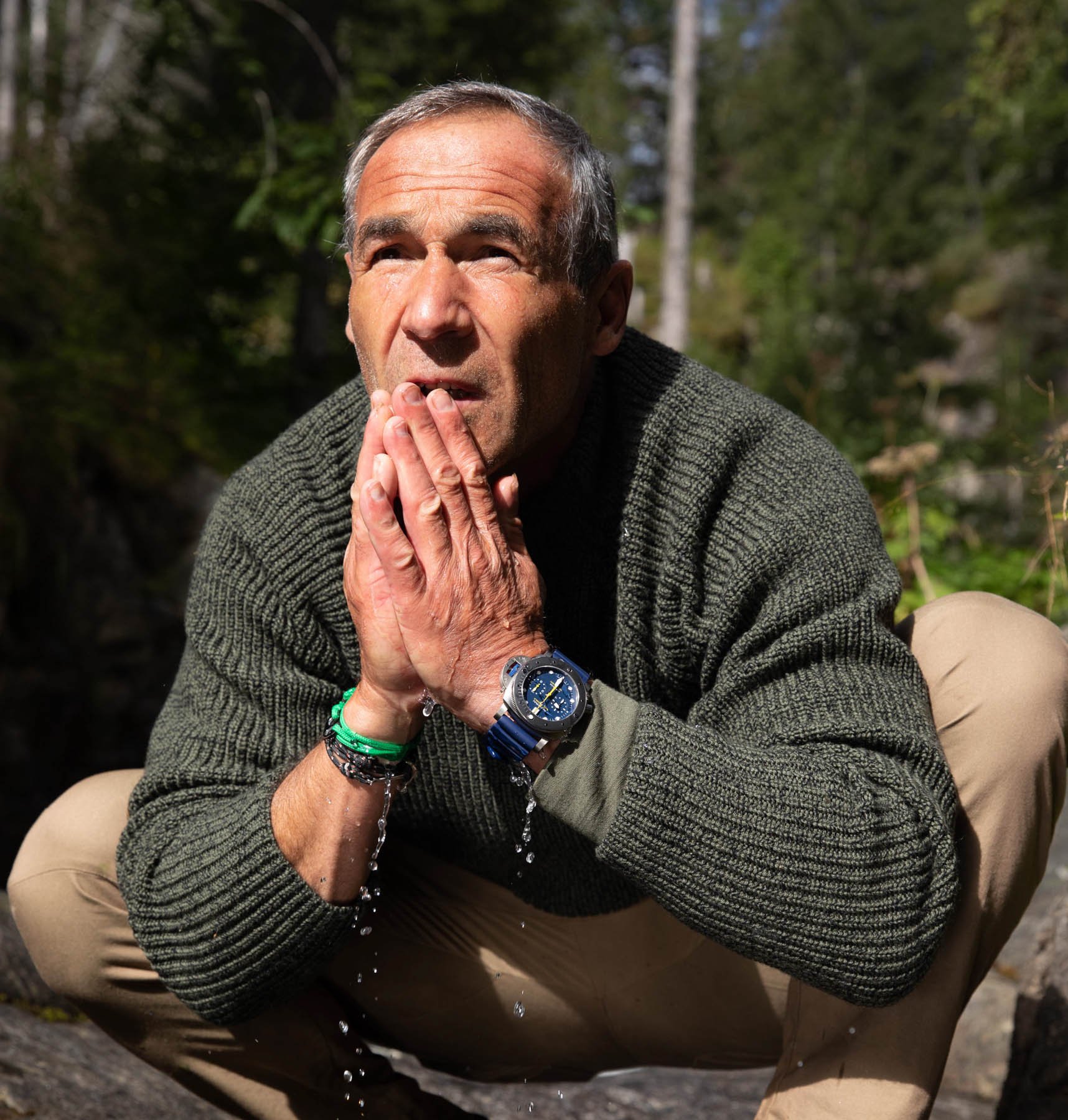 Beyond the proportions, however, this watch will also attack your wallet in a big way. Although the close-to-€20K price tag is nothing out of the ordinary for a non-steel Panerai these days, €19,900 is a lot of cheddar for a watch that doesn’t do much beyond looking cool.

…it damn well better be for this kind of money.

Technically speaking, the automatic P.9100 caliber (executed entirely by Panerai), is solid but unremarkable. I mean, we’re only talking a 4Hz uni-compax flyback chronograph here. The power reserve is three days, which it damn well better be for this kind of money. Yes, it’s a nice looking thing (in my opinion), but unless you have a penchant for cracking open your extremely expensive treasure (unadvised), you won’t actually be able to see it through the closed case back, which, itself, is decorated with Horn’s signature. 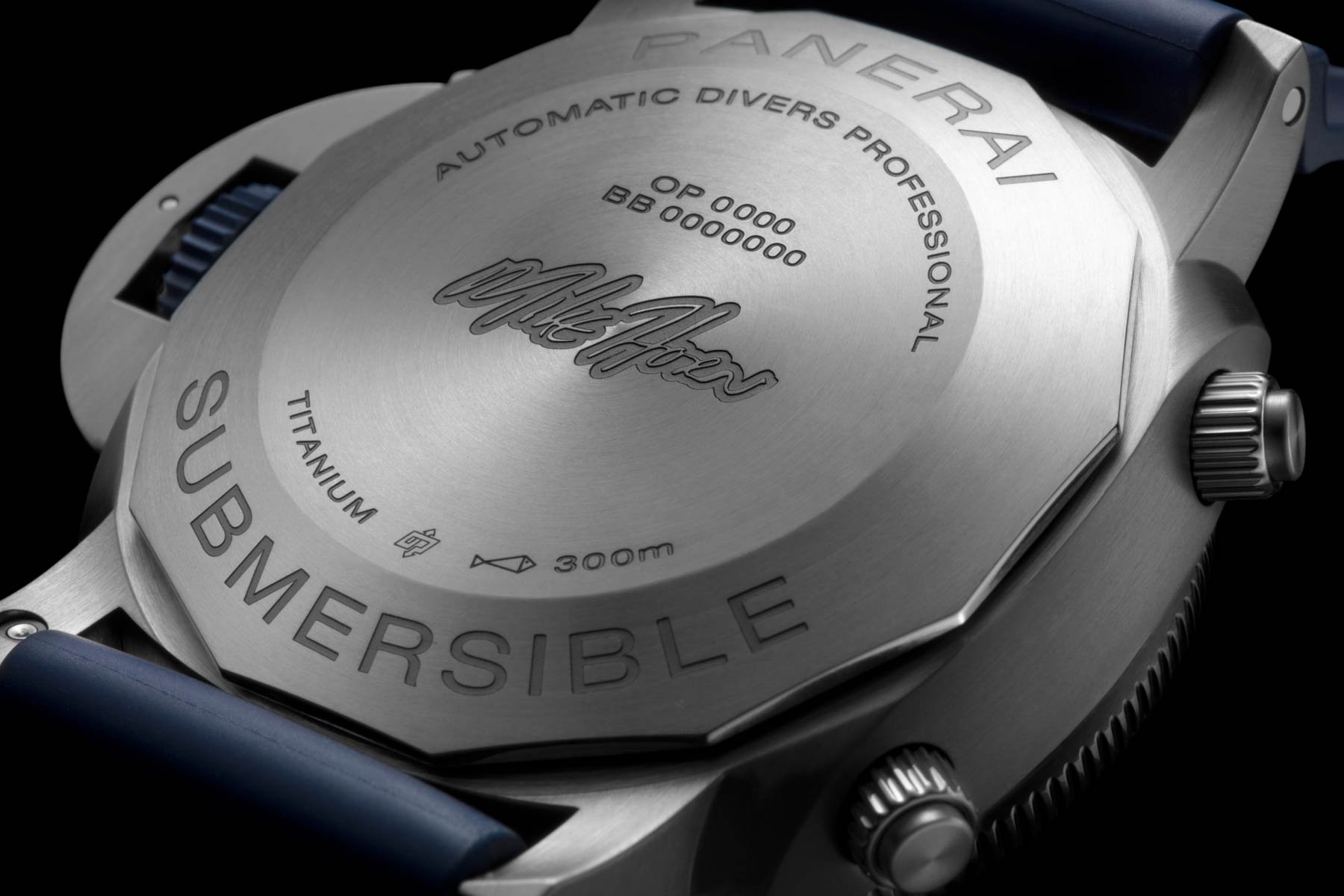 Yes, I do think it is a pretty natty signature. That much is true. But, really, we could’ve expected a bit more decoration for such a healthy chunk of change. From the renders, it appears Panerai has mastered the “aligning threaded case back” conundrum solved by Omega’s Naiad lock system on its deep-sea Seamasters. So at least that is a nice touch. 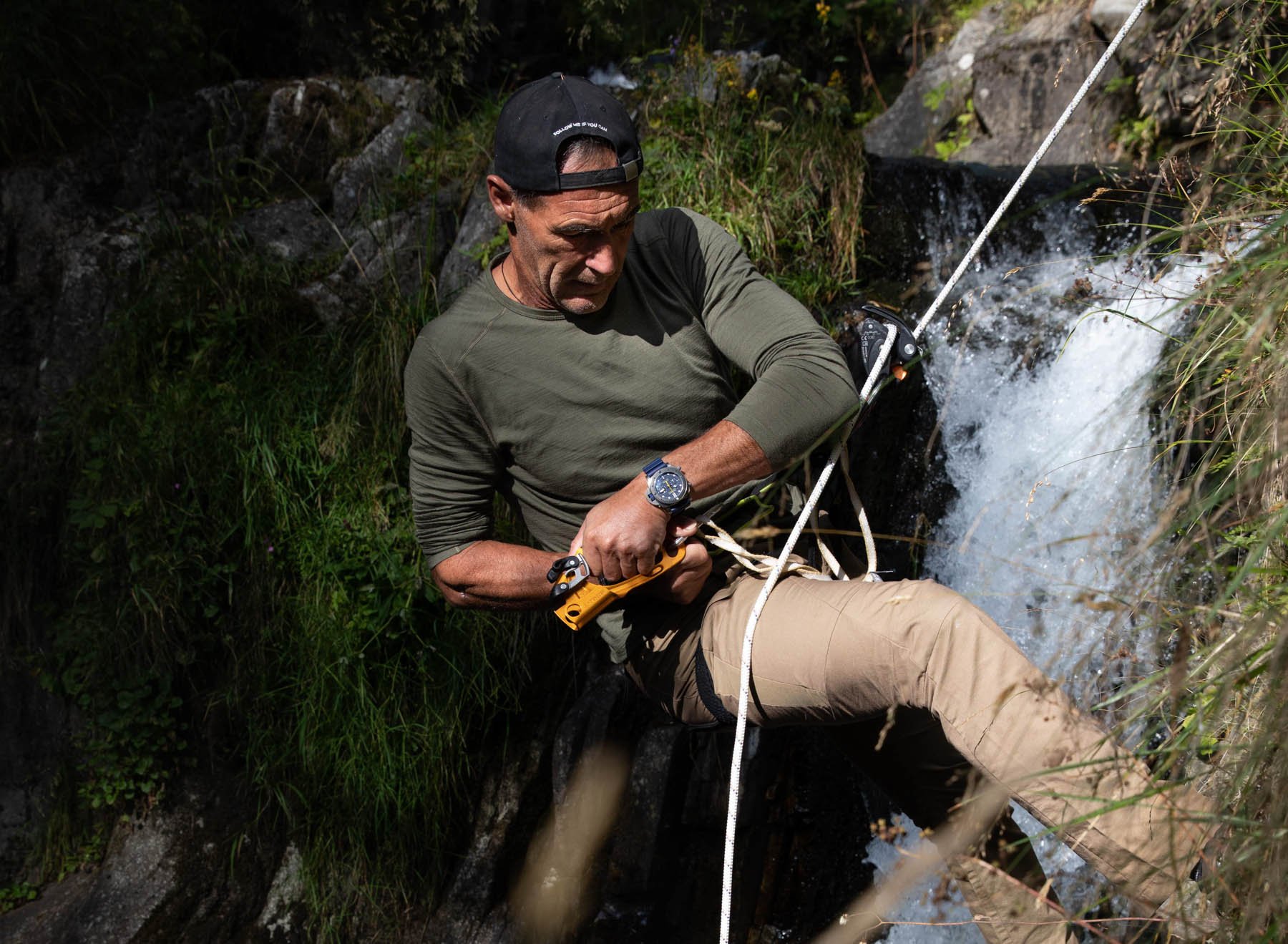 It’s all in the details

A nicer detail still, in my rubbery opinion at least, is the blue crown. I really do buzz off this colorway and think that, even at a preposterous 47mm, the titanium case would make this watch very handsome on the wrist. 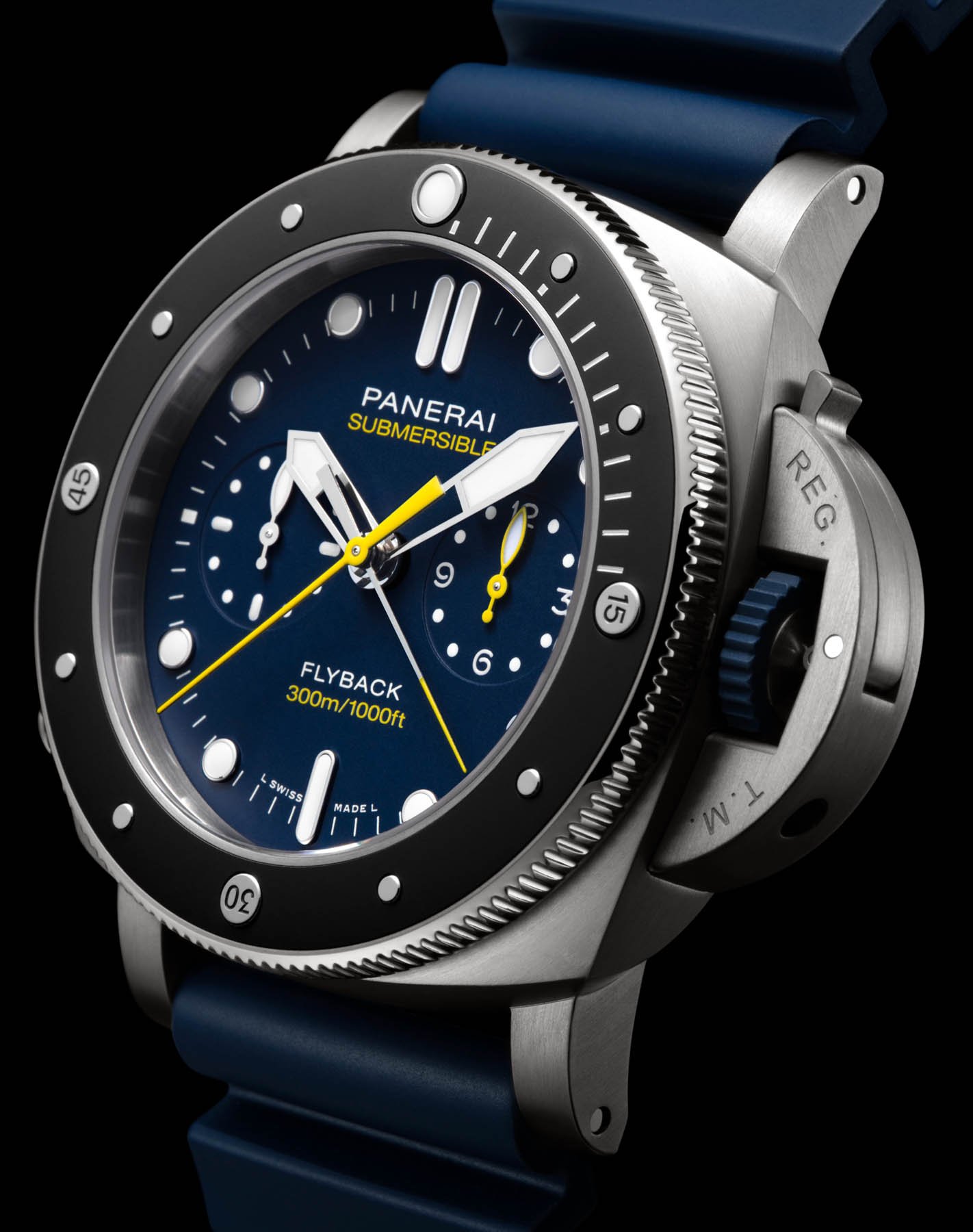 The left-hand chronograph pushers are cool. I like the compur layout. The flashes of yellow really work. But, man, I just can’t get away from the price. I want a Panerai. Really, I do. The brand, which has kind of fallen off a cliff in terms of “coolness” in the past five years, is actually growing in my estimation as more time passes. Perhaps not having the brand shoved down my throat constantly by insufferable watch snobs means it’s had a chance to come up for a bit of air. The result is that I’ve felt more comfortable getting acquainted with its products. 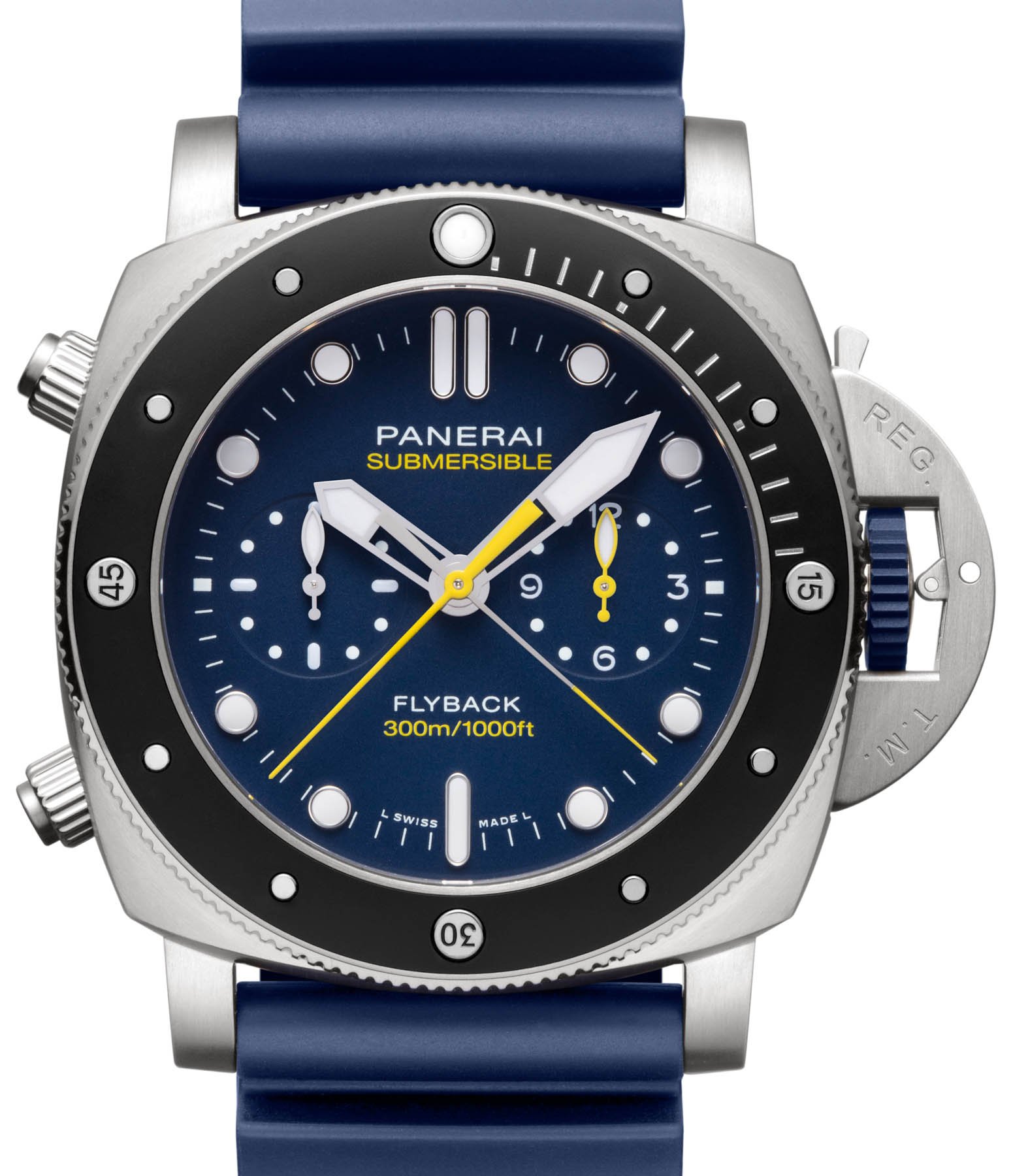 The best Panerai in the world

This is not the best Panerai in the world, despite being priced like a watch that thinks it is. Personally, I love the Radiomir. Genuinely, I think the one for me is the entry-level PAM00753, which can still be had for a surprisingly friendly €4,400. That’s right: you can still buy a Panerai for under €5K. And you know what? It’s almost the only Panerai I want. Yes, I do have an unhealthy attraction to the Panerai Luminor Submersible 1950 3 Days Automatic Oro Rosso PAM01164. But hey, I’m only human. 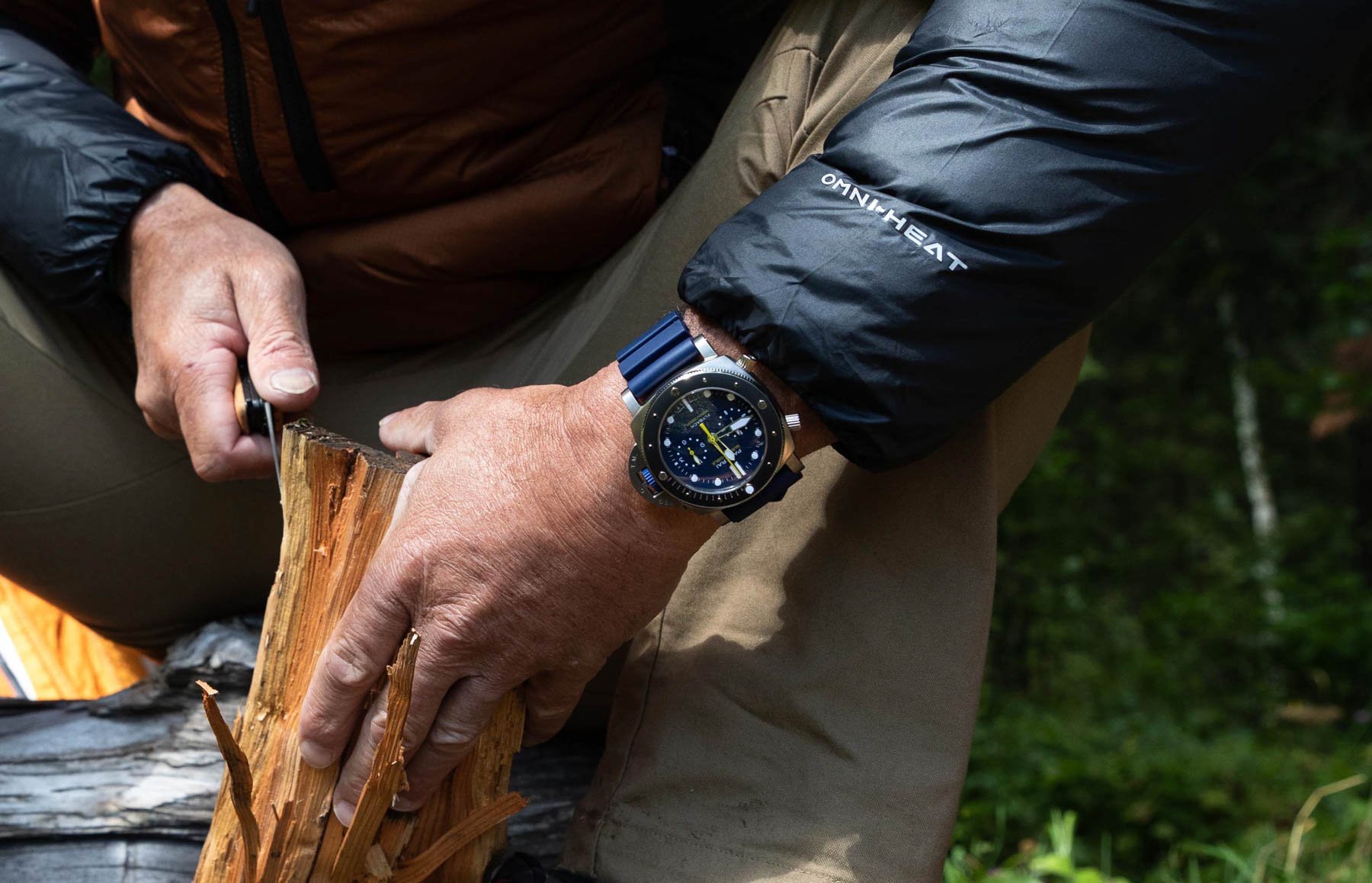 The thing with the PAM00753 is that it is the brand. To heck with all the crazy materials, partnerships, and marketing bumf. You can even chuck the delicious, sumptuous, alluring, captivating, stimulating oro rosso (red gold) of the PAM01164 out of the window if you must. The PAM00753 is (or at least probably should be) why you like Panerai.

…it won’t be selling to any of the men or women that might become the next generation of the Paneristi.

I’d like to see more models at that sub-€5K price point, to be honest. While this Mike Horn limited edition will no doubt sell out in a heartbeat, it won’t be selling to any of the men or women that might become the next generation of the Paneristi. And, from the sounds of it, the brand could do with that generation maturing anytime now. Learn more about Panerai here.