Parmigiani Fleurier, according to reports, has massively outsold its production capacity for the year. So while we thought the esteemed independent brand wouldn’t have more novelties this year, along came a little summer surprise. Watch media-commerce site Revolution and its sister style outlet The Rake have launched their first collaboration watch with Parmigiani Fleurier. This Tonda PF Micro-Rotor “Serenissima” is a salmon-dial limited edition of only 25 pieces.

The news comes not from the Swiss Jura. No, no. The folks there take summer closure very seriously. In fact, it originates from Singapore, where the equatorial sun shines all year round. Thus, it seems that now is as good a time as any to announce a new collaborative watch. To be fair, it may even be a clever move to capture your attention as industry news gets thinner while Europe is on leave (and battling a historic heatwave). 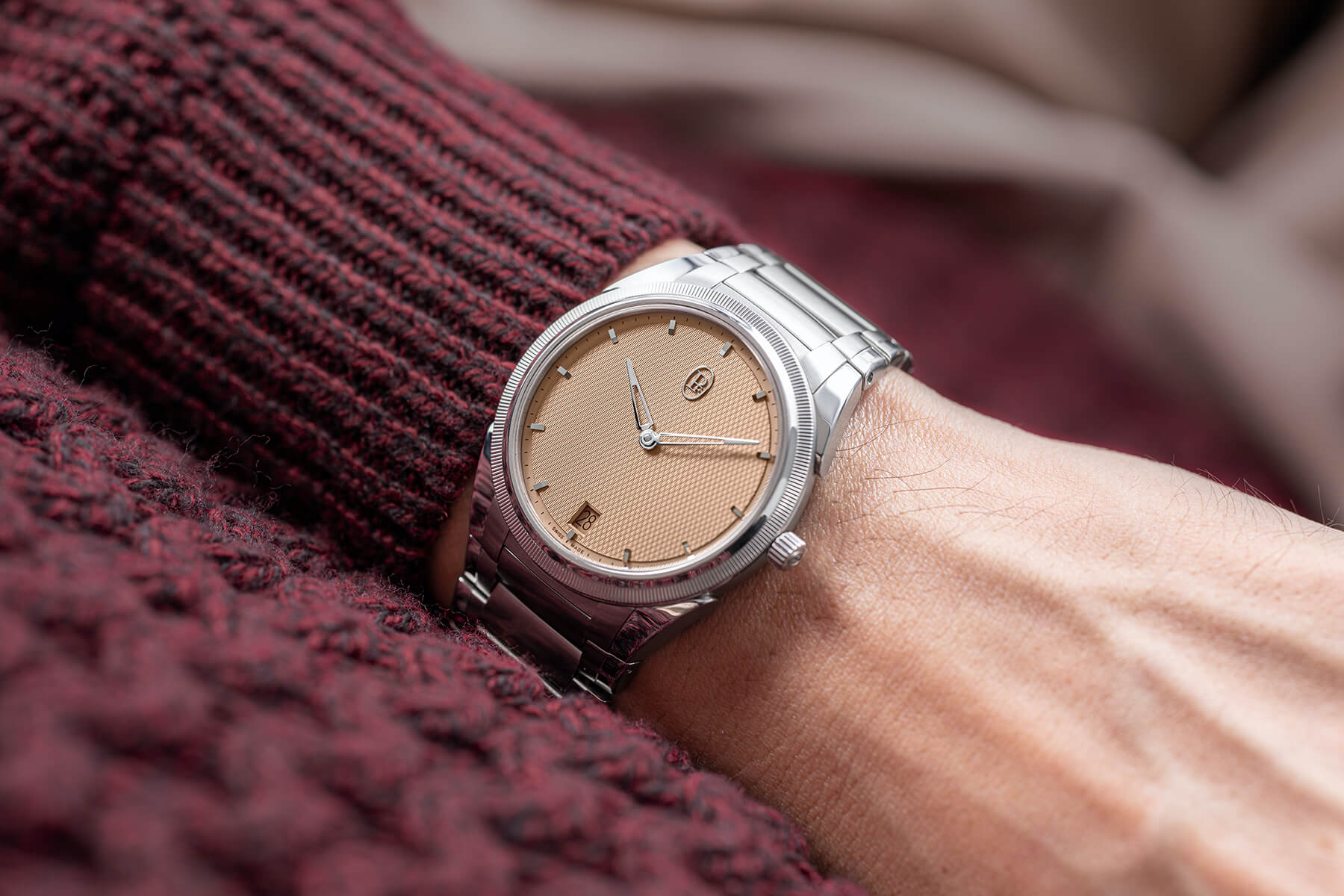 The idea behind the Tonda PF Micro-Rotor “Serenissima”

According to Wei Koh, founder of Revolution and The Rake, the timing of this collaboration is of “divine providence”. Around a year ago during Geneva Watch Days, Koh enjoyed his pre-launch press access to sneak peeks of the novelties. That was when he experienced a lightning strike of coup de foudre as he saw the Parmigiani Fleurier Tonda PF Micro-Rotor. For the veteran media boss and lifelong collector who has seen it all, it was an unusual and unexpected moment. So much so that he decided to arrange a purchase of the model the very next day. Koh then made a subsequent visit to Parmigiani Fleurier, where he asked company CEO Guido Terreni to collaborate on a limited edition. 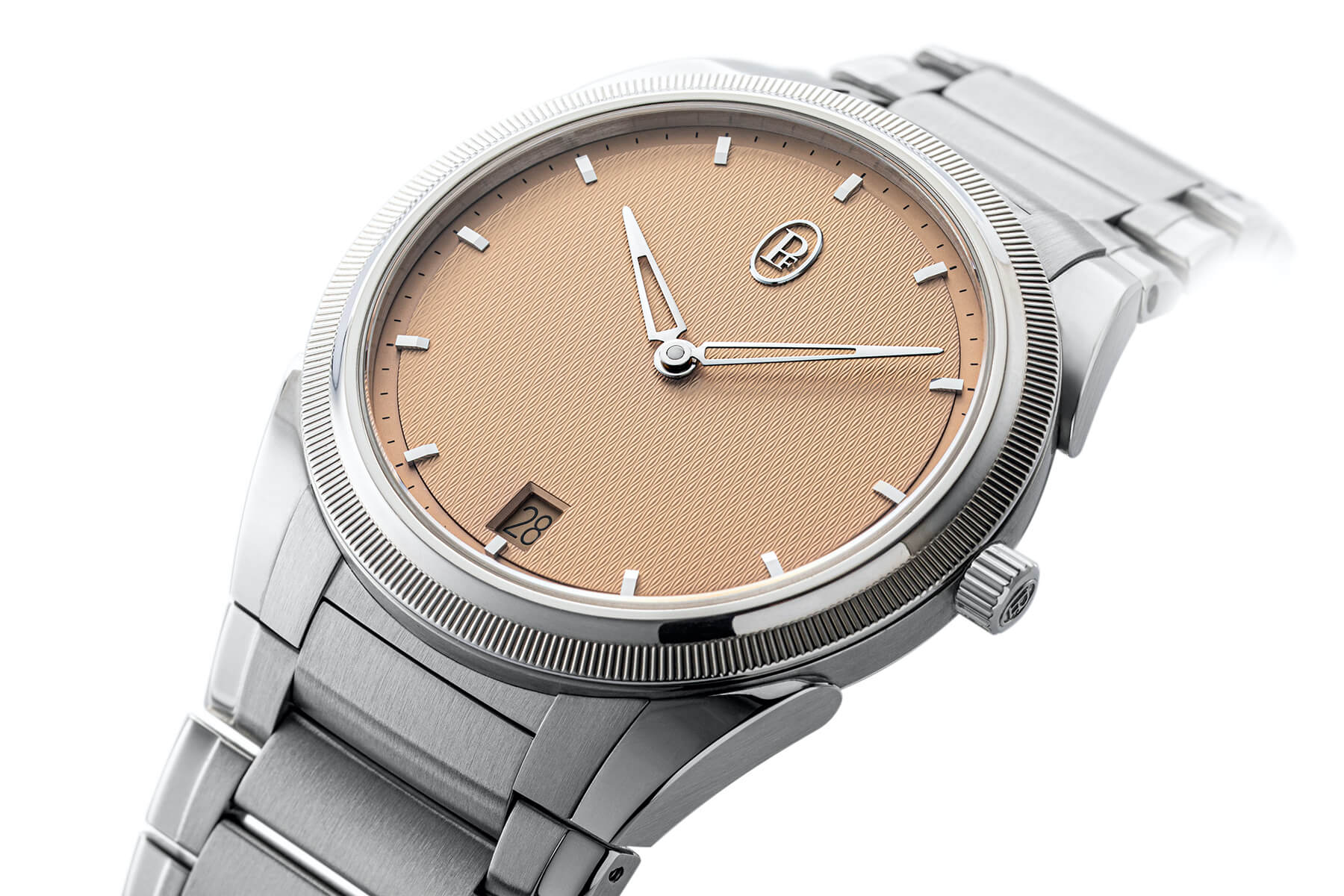 And Koh’s lightning moment with the Tonda PF couldn’t have been timed any better. You could either call it a stroke of luck or a stroke of genius, but as soon as the PF collection was unveiled to the public, the demand went through the roof. Since then, overwhelming requests for any new model added to the PF lineup have continued unabated. If this collaboration had not gotten the green light from Terreni when it did, Koh does not doubt that the surging demand would have killed it in its tracks.

I make no bones about how much I adore the no-longer-hidden gem Parmigiani Fleurier (and shared that in my last review here). Under Terreni’s new stewardship, the Swiss brand has consolidated and refined its aesthetic codes. You can listen to Terreni elaborating on his clear and elevated vision for the brand to Rob in this Fratello On Air episode here. As a result, the PF collection has symbolized a renewed direction for the brand. It is a line engineered for the connoisseur who has matured through the collecting lifecycle. After the obvious watches, some tend to develop an understated taste for the less recognizable, off-the-beaten-path pieces. 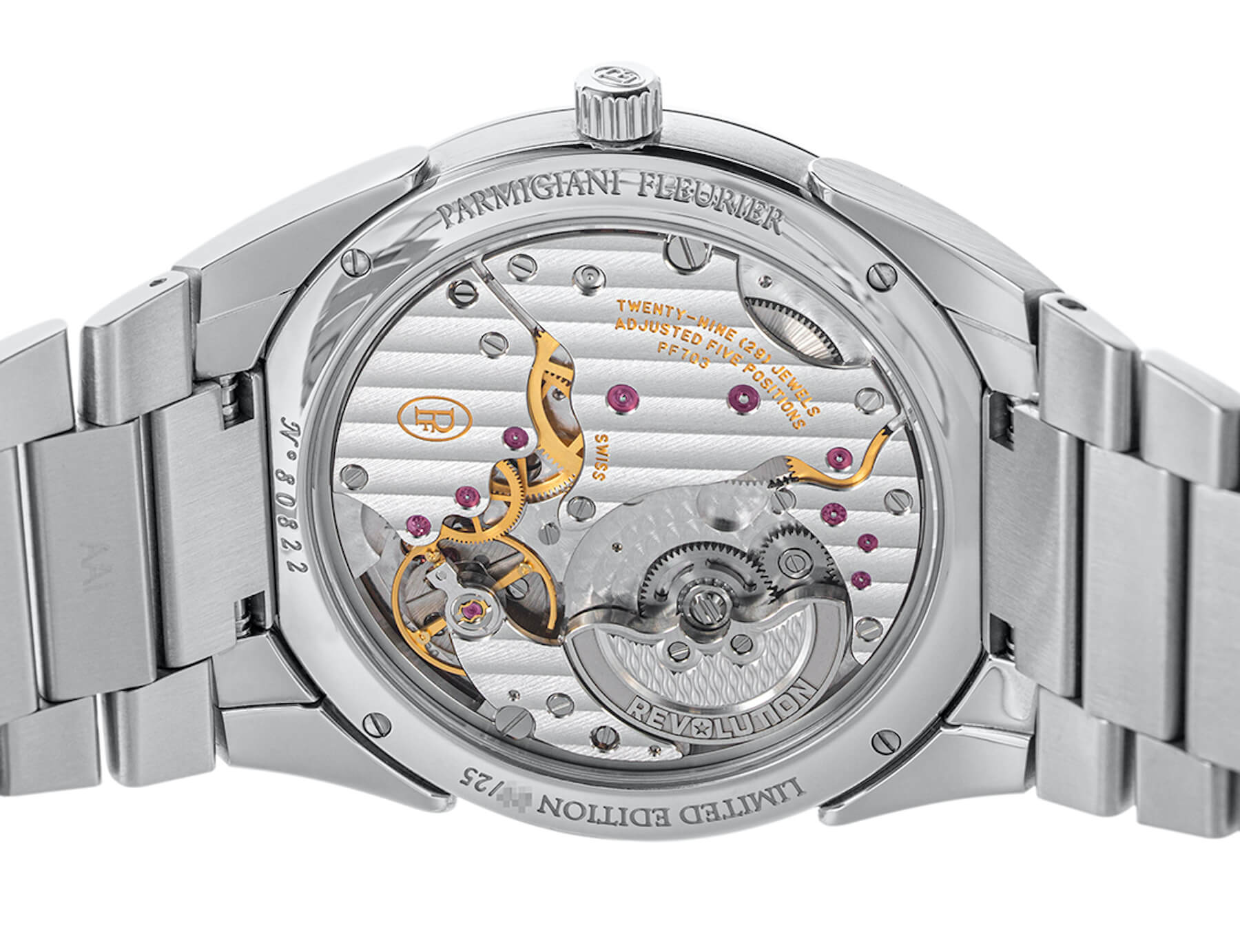 Clearly, the Tonda PF has struck a chord with Koh and the watch community at large. Why? According to Koh, “Because the PF [is] such a brilliant design — dynamically charged with enthralling minute nuances from the miniature guilloché pattern on the dial, to the micro-fluting on the platinum bezel, the hand polishing on the interior edges of the lugs that face the case, and the contrast between the tapering polished sections that flow into the sublimely brushed bracelet.” Even one of our own Fratelli, Andreas Ahrens, has become a besotted owner of the Tonda PF Micro-Rotor.

For the Revolution & The Rake limited edition, Koh proposed a salmon dial for the Tonda PF Micro-Rotor. As a fan of Le Corbusier (the world-renowned Swiss-French architect born in Neuchâtel), Terreni consulted the late artist’s famous color keyboards. This may sound a little tarot-esque, but apparently, as per the keyboards, this salmon hue denotes “joy, energy, and triumph”. Koh believes that Terreni was happy to go along because they could “make this a watch of hope, positivity, and renewal” after the two-year pandemic. 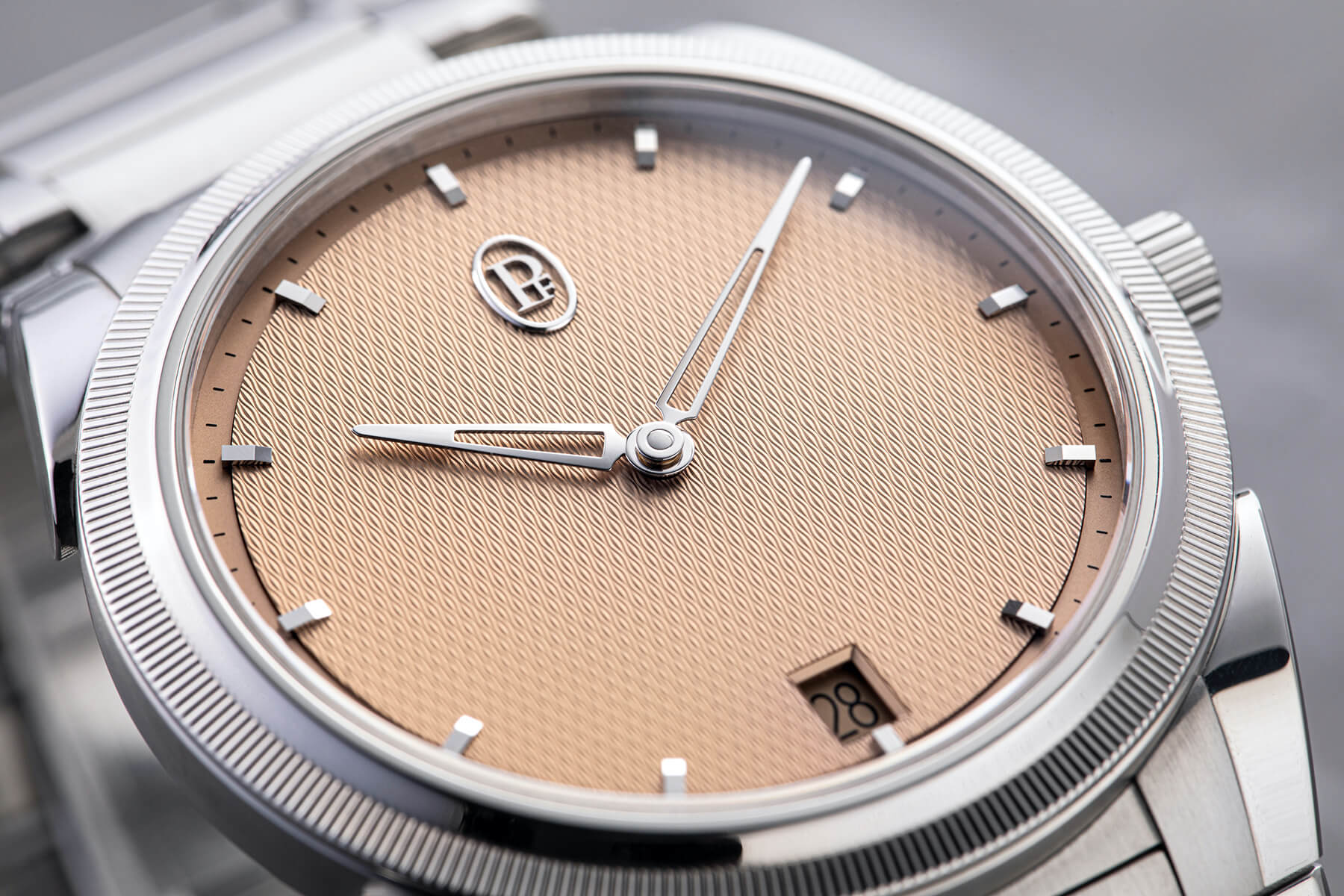 It’s hard to say which shade Parmigiani took from Le Corbusier’s palette for the dial of this collaborative variant. There is quite a spectrum of rose and rouge in the 1931 color keyboards that we could consider to be “salmon” pink. From the press photos, however, it looks rather like a nude or beige color. It could be a visual discrepancy due to our different screen settings. Koh describes the actual shade as a golden rose hue which reminds him of the rising sunlight at daybreak over the Gulf of Venice. As the magical city is also known as La Serenissima (“the most serene”), it lends its name to the Tonda PF Micro-Rotor “Serenissima” edition. 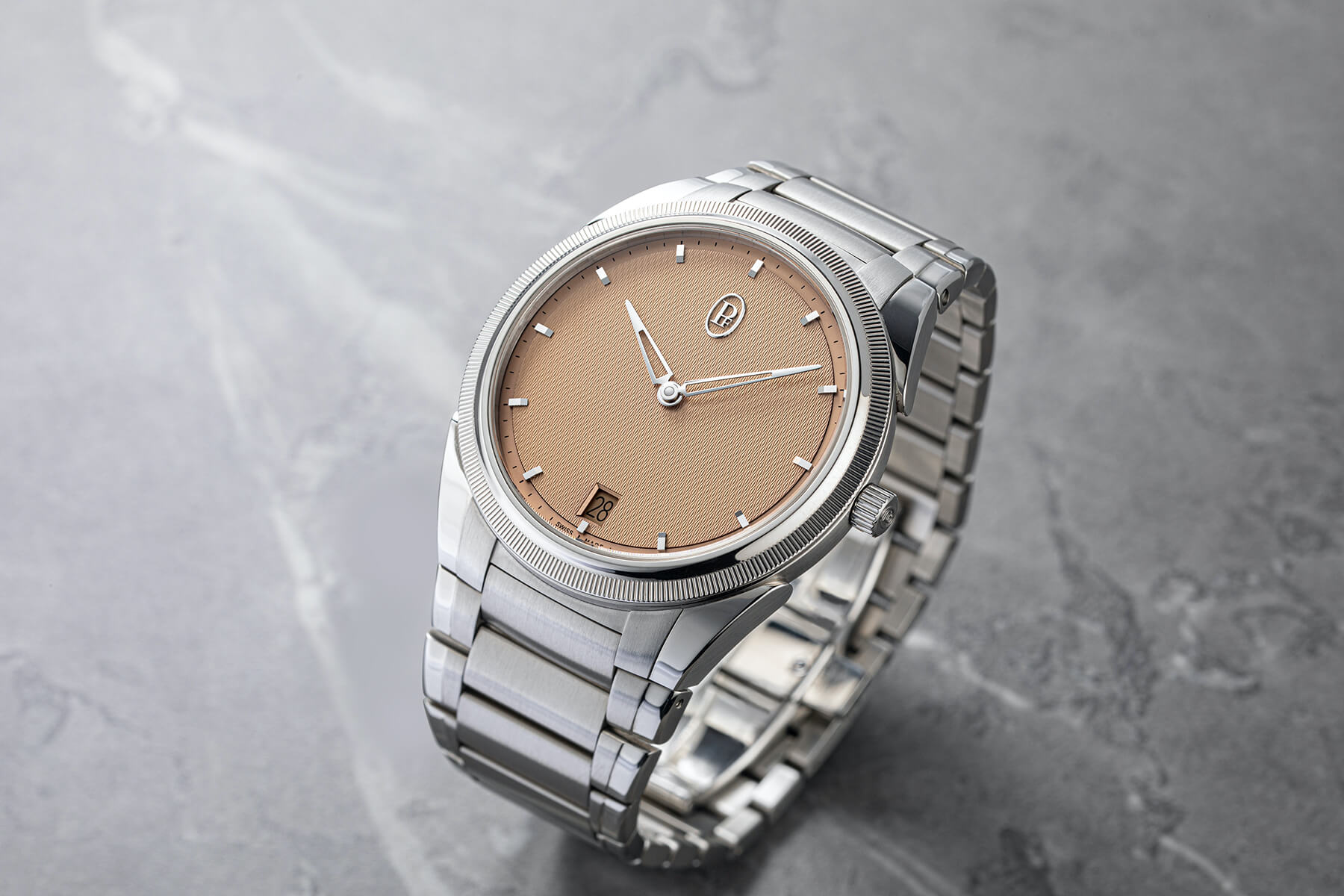 The “Serenissima”, of course, wears just like the Tonda PF Micro-Rotor in a svelte casing with a masterfully integrated bracelet. The finishing is an exemplary display of Parmigiani’s upscale standards. I would encourage you to read Andreas’s review of the black-dialed model, detailing the full specs, wrist experience, and an owner’s perspective in this article. 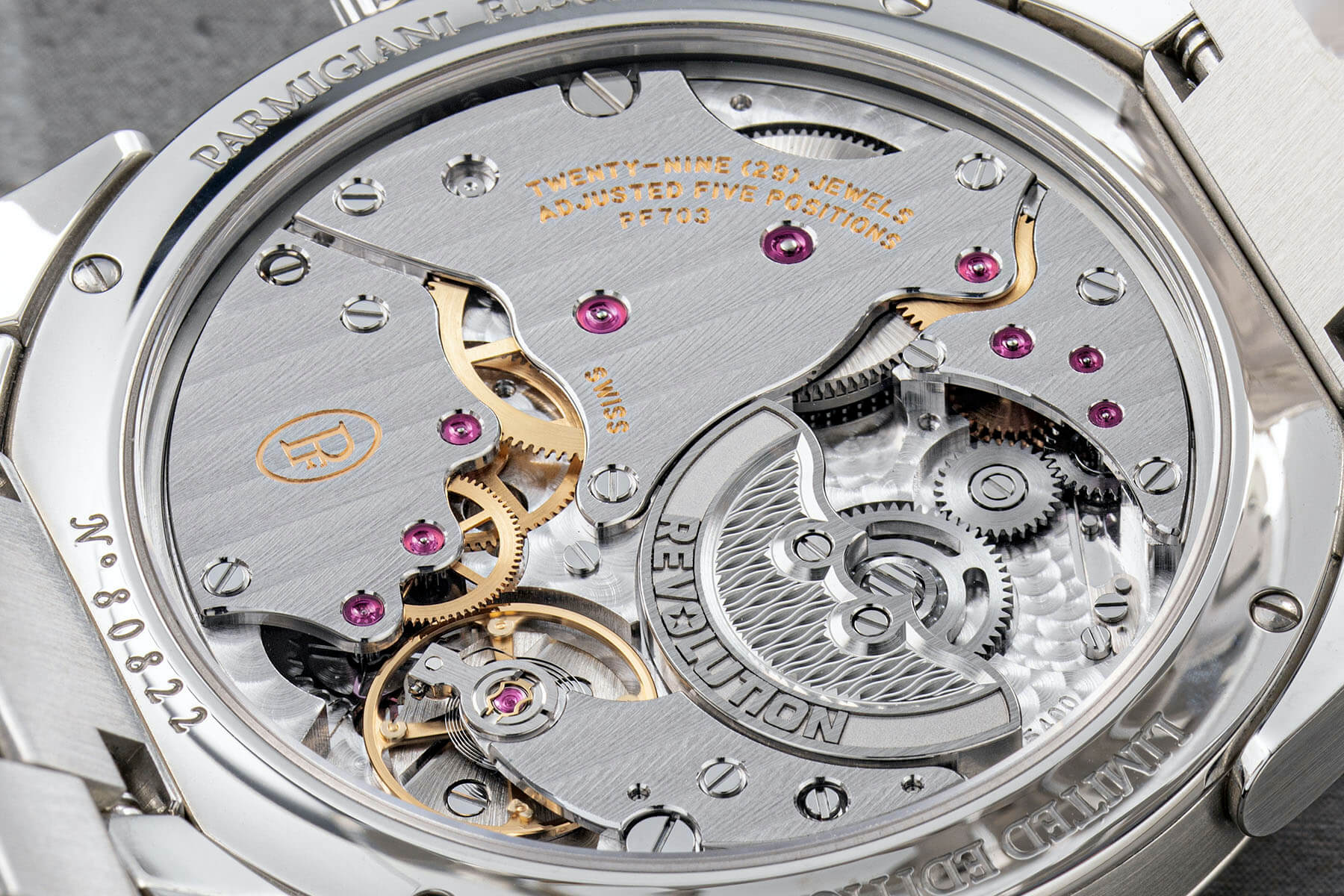 Measuring 40mm in diameter and 7.8mm in height, the “Serenissima” features a golden rose “Grain d’orge” guilloché dial. The date wheel and minute track match the main dial color, emphasizing the minimalistic theme. Atop the case sits an ARunic sapphire crystal, which harnesses the most advanced technology to offer colorless double-sided anti-reflection.

Powering the “Serenissima” is the ultra-thin automatic caliber PF703. Produced by Parmigiani’s sister company Vaucher, this movement features a free-sprung balance with a flat hairspring. It beats at 21,600vph (3Hz) and provides a 48-hour power reserve. The highlight of this lavishly decorated movement is, of course, the eponymous micro-rotor. For this limited edition, it is a custom rotor exclusively crafted and engraved with the Revolution logo. 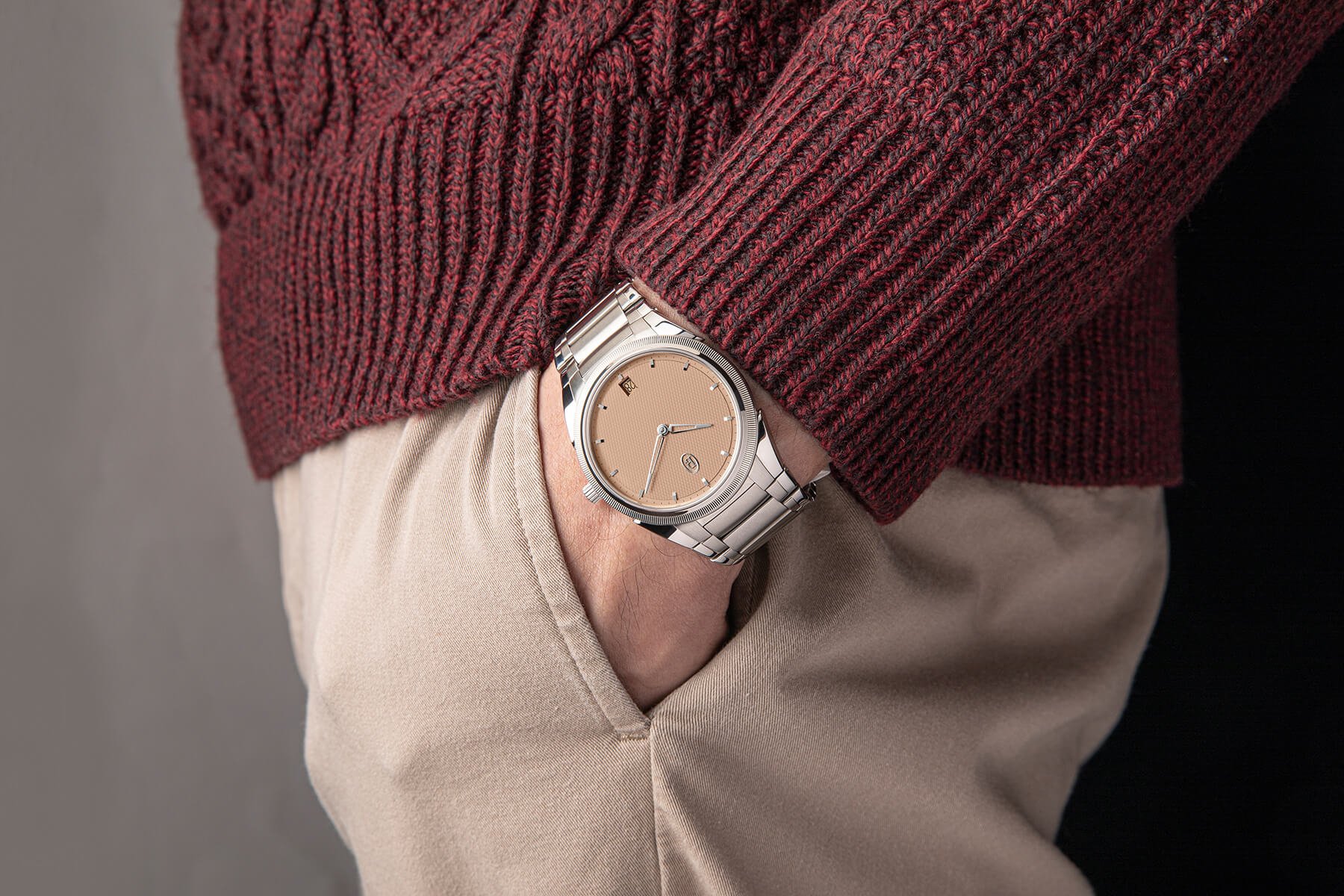 The Tonda PF Micro-Rotor “Serenissima” exudes alluring elegance with its sensual curves and minimalist aesthetics. A run of 25 pieces priced at CHF 21,450 debuted yesterday, July 21st, on RevolutionWatch.com. However, in the wake of Parmigiani’s rising popularity, the “Serenissima” has already sold out. While we cannot (unfortunately) wish you luck in buying one, we would still like to know what you think of this salmon-dial edition. Does the color suit the Tonda PF Micro-Rotor? What kind of dials would you like to see from Parmigiani in the future? And are there any other changes you would make to this model? Let us know your thoughts in the comments below.