Shape up – The past, present and future of Cartier’s case designs

However you look at it, Cartier has always been the creator of shaped watches and the brand never renounced their past. Their creations from the twenties and thirties are still a returning theme in the collection, as they often have obtained an iconic status. Stunning examples of Cartier’s shaped watches are the curved cases of the Tank Americain and the Tank Cintrée and Tonneau pictured here.

These are watches that fit like a glove on the wrist and look so handsome halfway under the cuff. This is what most of us probably see as shaped cases.  But there are less well-known examples, produced in very small quantities, that are even more extreme when it comes to case design. 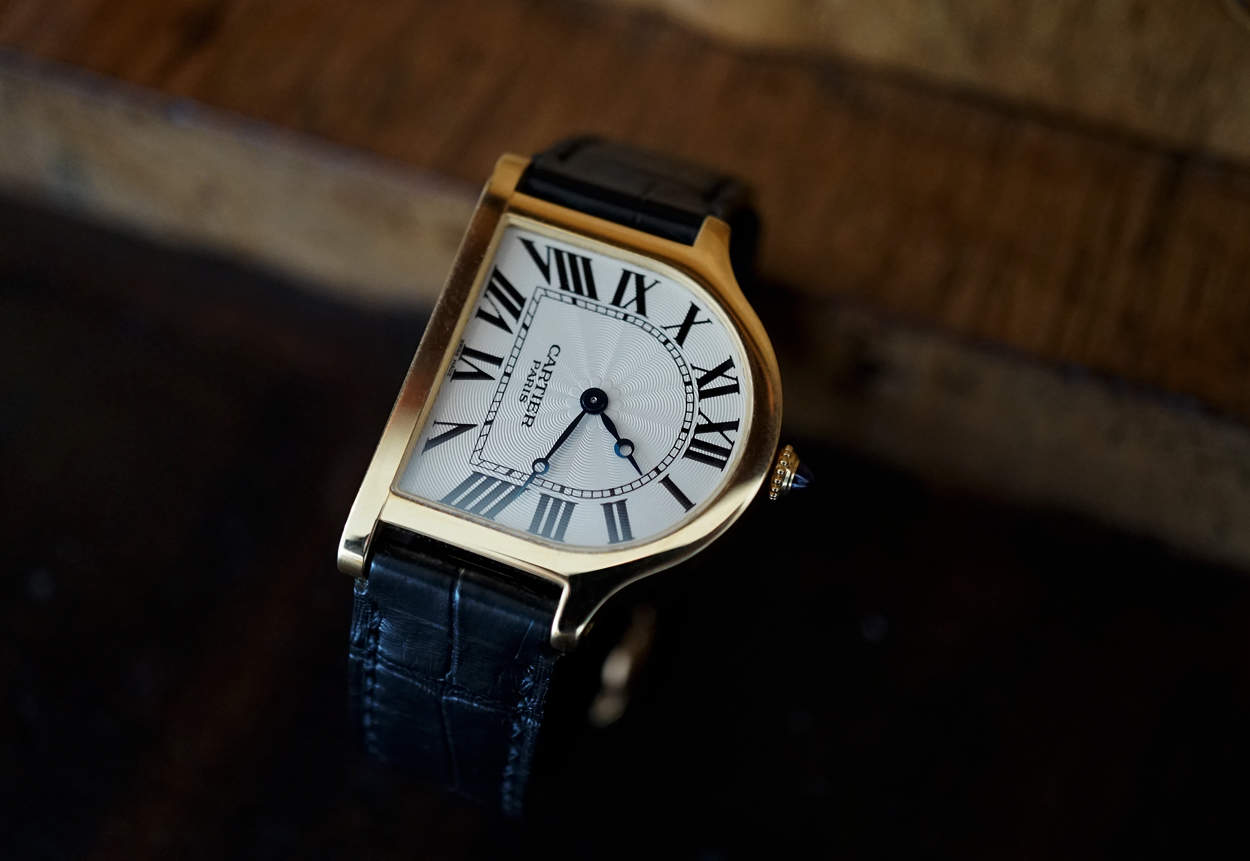 1923 For instance, was the year of the Cloche. At first, the watch may look a bit odd and out of balance, but on the wrist that idea fades quickly. Since the dial is turned one-quarter, reading the time is almost more logic. But the fun starts at the end of the day, when the watch is put on your bedside table and it suddenly works like a little clock. 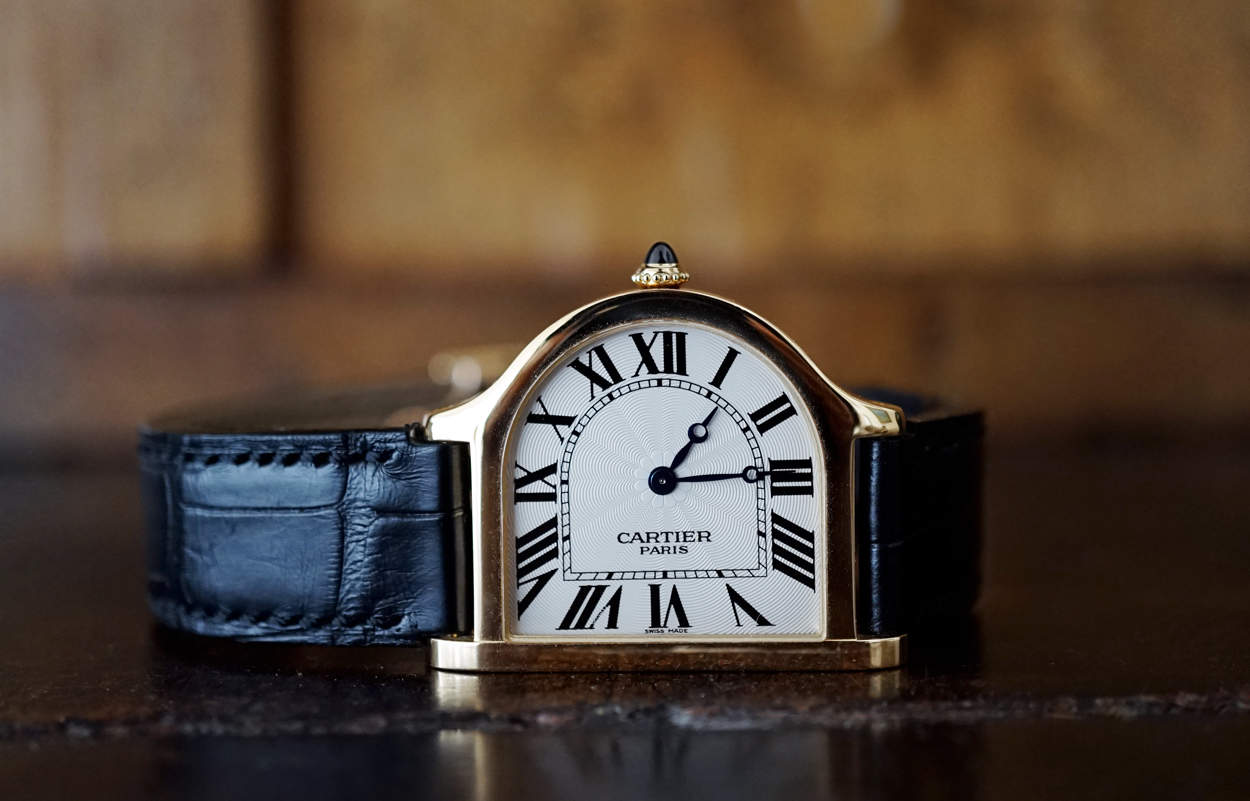 Over the years Cartier made several versions in different sizes and also with Arabic numerals, but the one we have here is the largest version and was the last one seen in the collection. To me this is a very attractive watch, but I realise  that it’s not everyone’s cup of tea. This version of the Cloche is fitted with a hand wound and reworked caliber by JLC and produced in 2006, for Collection Privée Cartier Paris, in a limited edition of 100 pieces in yellow gold only. 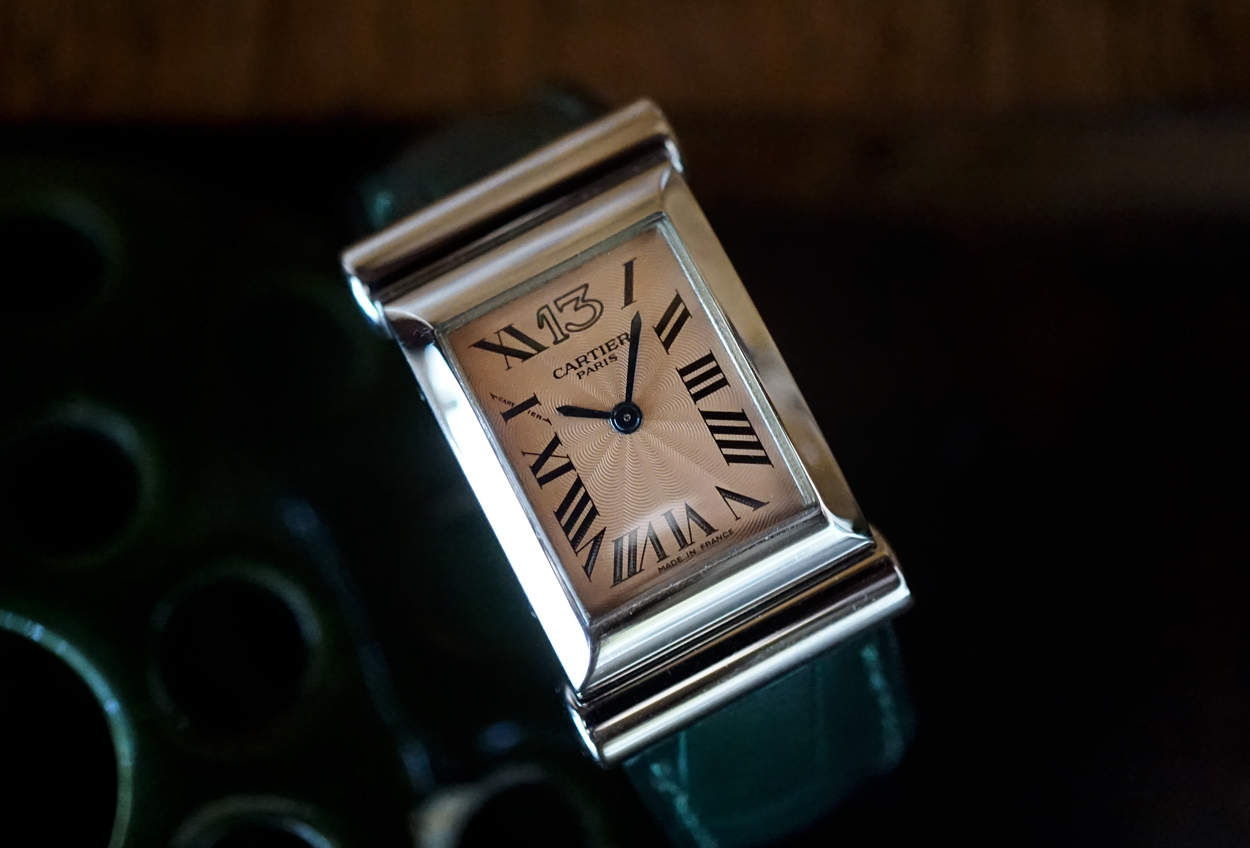 Cute, different and fairly unknown is the little Driver that was originally launched in 1936 and was meant to be worn on the side of the wrist. The model presents a few very special characteristics adapted to make reading the time while driving as easy as possible. Its case is obviously the most striking feature, and how you get to wear the Driver; this timepiece is designed so that it sits inside the curvature of the wrist, and not on the wrist, as any other watch would do. 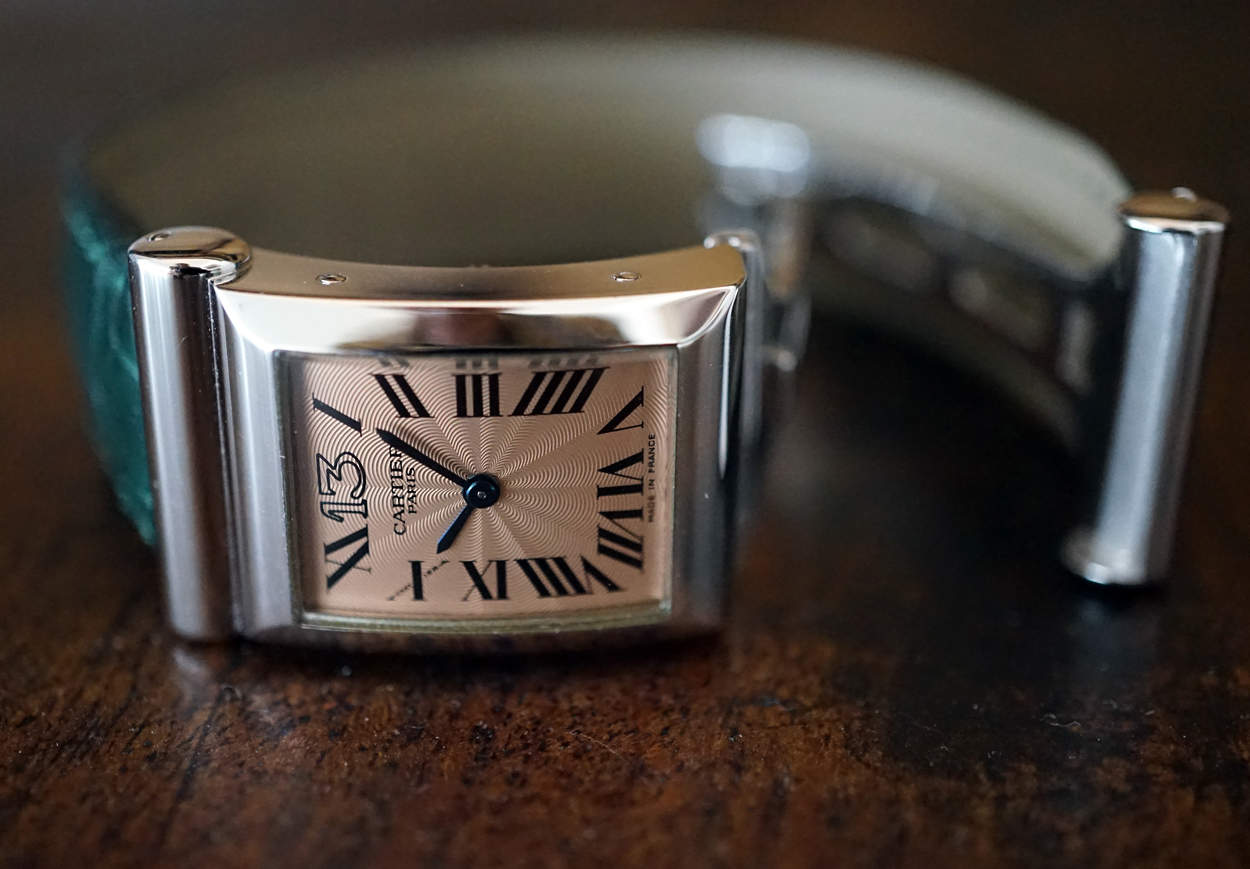 This way, when you are behind the steering wheel, the dial will always be in front of your eyes. The deployant buckle plays a very important role in the way the watch sits on the wrist since the deployant is directly attached to the case. So it would be positioned underneath the wrist, like any other watch and keeps the watch on the side of the wrist. 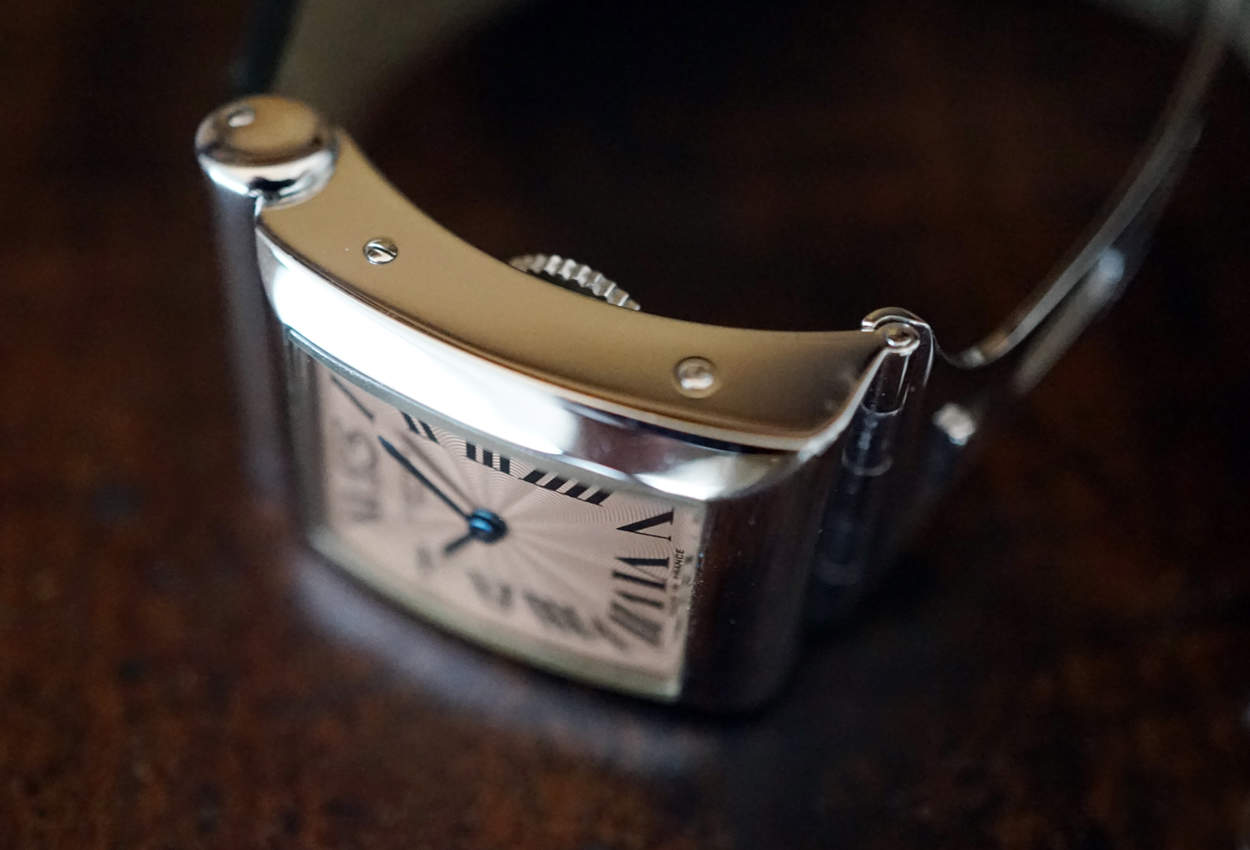 Cartier invented the back wind mechanism around 1940 and this is what made the Driver so special. This version with the salmon dial, was created for the re-opening of the 13 Rue de la Paix,  Flagshipstore in Paris and was launched in an edition of just 13 pieces in white gold.

At first glance, the Tank Asymétrique (1936) appears distorted and crooked. Once on the wrist, the model offers a comfortable angle for viewing the time. 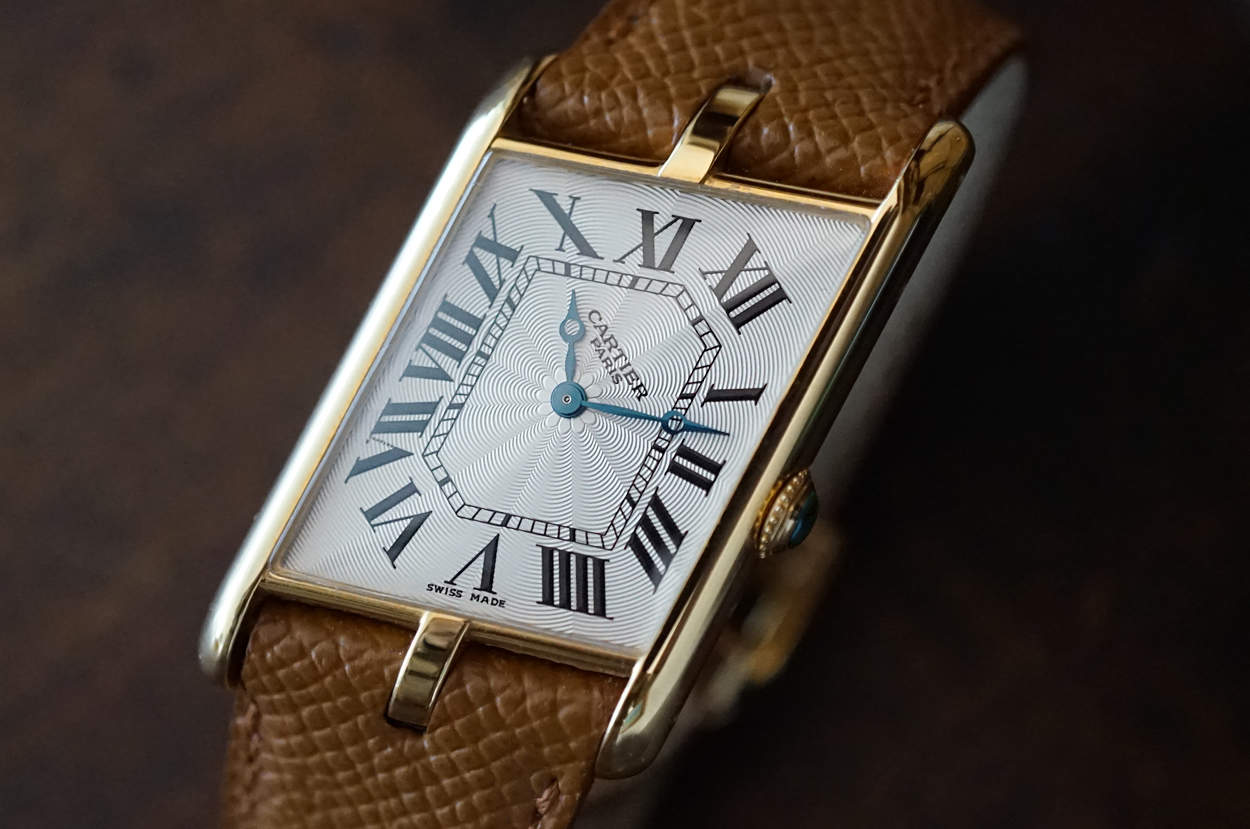 Also known as the Tank Oblique, the Tank Asymétrique was produced in different sizes and with different lug constructions.  What they all have in common is that slightly turned dial, making it unnecessary to bend the forearm in order to read the time. 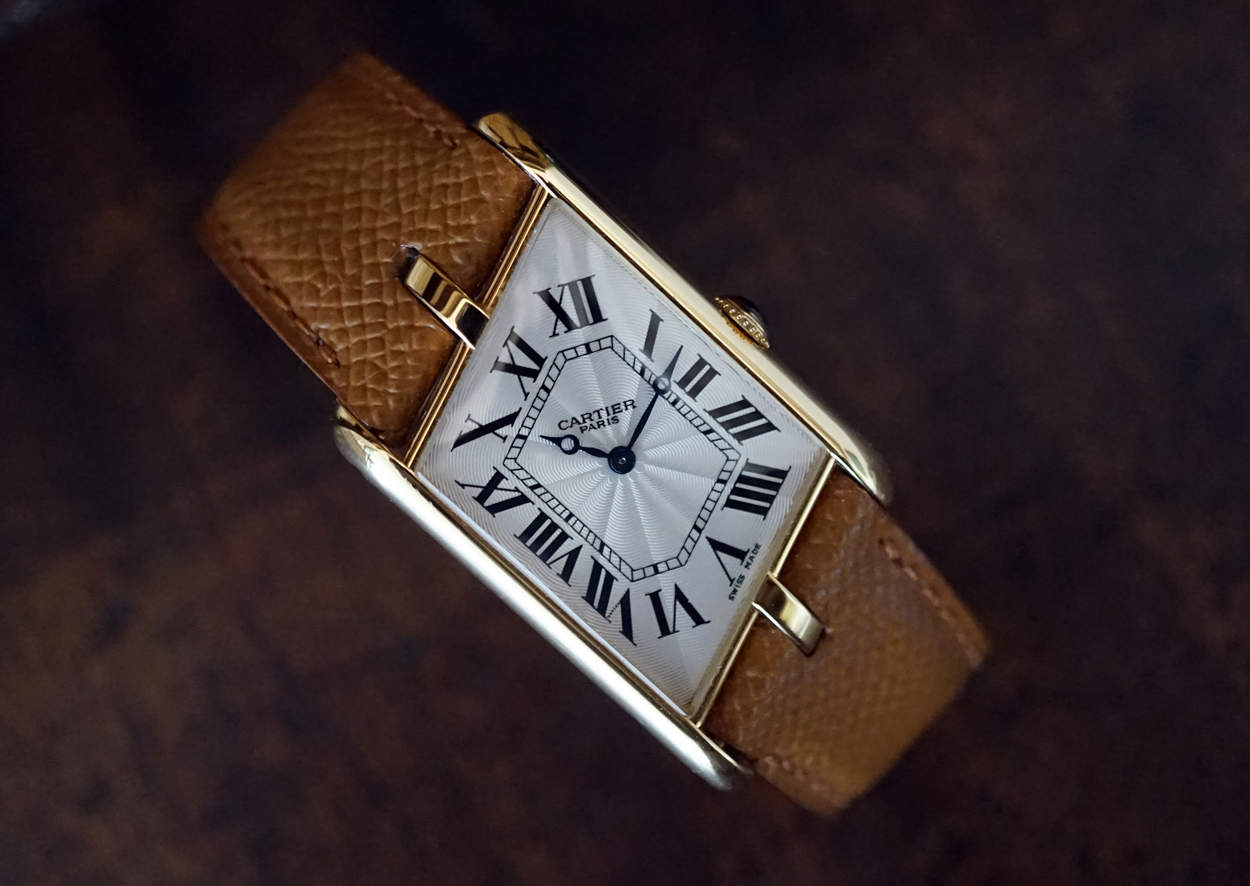 Pictured above is a re-issue from 2008, with a flat sapphire set into the winding crown. 100 pieces were produced in yellow gold only.

The in 1967 created Crash watch was the last extreme creation and this model is very popular among collectors, especially in the slightly larger and impossible to find  London version. Cartier went a huge step forward by creating a new larger version in 2015.  It not only featured a larger curved case, it is also skeletonized. Cartier released this version, as a completely new designed watch and made it large enough to be worn by men. The team of engineers, watchmakers and designers that came up with this entirely new case, created also the new skeleton caliber 9618MC especially for the new Crash. 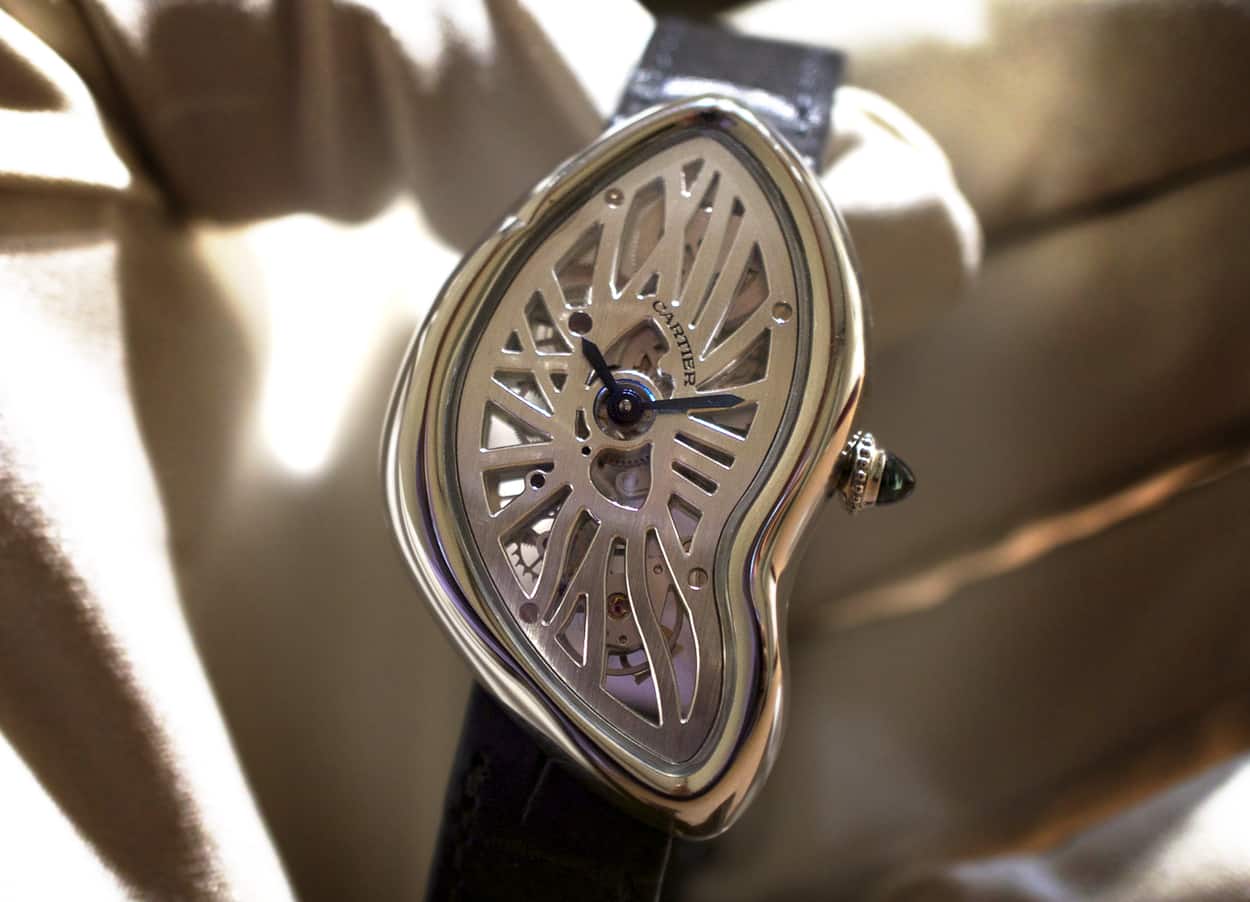 This caliber may be based on the existing skeleton movements, used for the Santos Dumont skeleton,  it had to be heavily redesigned to fit in the unusual shape of the case of the Crash. So the barrels and gear train had to be relocated. Like all previous Crash models the Skeleton 2015 version, is also produced in a limited and numbered edition. This time 67 pieces in platinum were launched, an amount that refers to the year, the Crash was created. The Crash skeleton sold out during the first months after the release.

Since 2008 Cartier has shown, year after year, that there are no complications that they can’t produce. From flying tourbillons to minute repeaters or even a combination of the two, nothing is too complex to create for the watchmakers at ‘La Maison’. During those last eight years the focus of the collection was more on technique and less on design, with the exception of the Crash Skeleton.

I think that Cartier has come to the point where the balance has been reached and I expect in the years to come to a more equal division between high-end watches and shaped stylish creations with a link to the famous Louis Cartier designs of before – Time will tell!