Patek Philippe And All That Jazz — Watches Connect The Biggest Stars

It was when I heard the 1936 song “Caravan” in the car on my way back home from Fratello HQ that I thought of Duke Ellington’s Patek Philippe watch. I saw it in the Patek Philippe Museum in Geneva a long time ago. And while Duke Ellington and his band played the exotic and mysterious-sounding American jazz standard, other famous jazz musicians who wore Patek Philippe watches also came to mind — other jazz royalty like Count Basie, “Maharajah” Oscar Peterson, and “Lady” Ella Fitzgerald, for instance. And then more thoughts and memories started rolling through my brain. I thought it was best to set up an appointment with Dr. Peter Friess, curator of the Patek Philippe Museum, to show me the watch and tell me a bit more about it. It turned out to be quite a surprising, even sobering talk.

Let me warn you upfront: there will be very few photos of watches in this article. Yes, there’s the extremely rare yellow gold Ref. 1563 split-seconds chronograph. There’s also a shot of the movement that beats inside a Ref. 1563, a young Edward Kennedy “Duke” Ellington (1899-1974) visibly wearing a Tank à Guichets — a quirky jumping-hour Tank from 1928 — and a shot of him with the strap of a watch visible. Could it have been the strap of the Ref. 1563? Alas, there are no shots of watches on the jazz legends connected to Duke Ellington. Still, bear with me if you’re into jazz and watch anecdotes and you don’t mind me reminiscing a little bit. 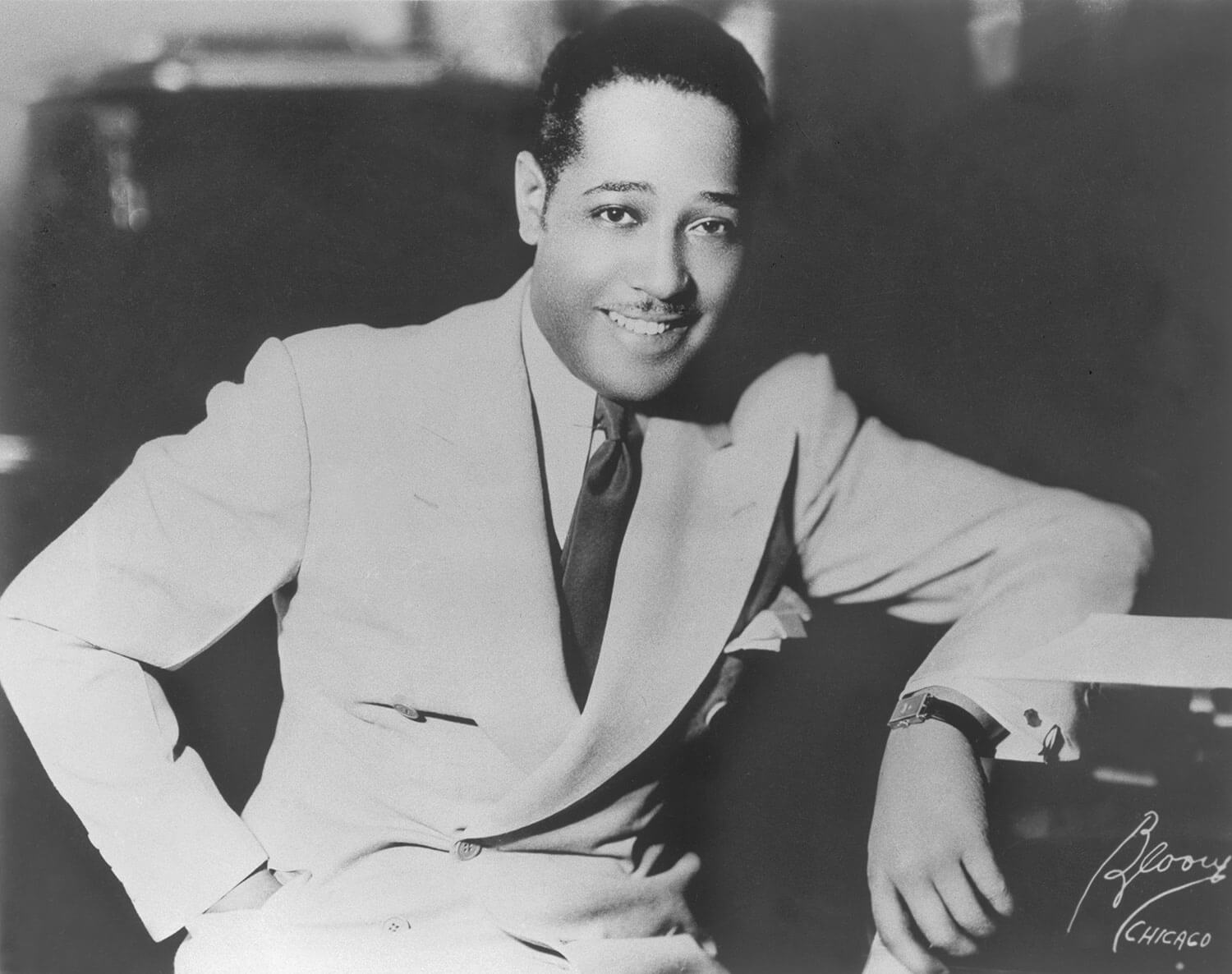 A young Duke Ellington with his 1928 Cartier Tank à Guichets

Patek Philippe and all the jazz — Inventory number P 1247

For those who think that just one picture of an ultra-rare Ref. 1563 split-seconds chronograph is just not nearly enough, I can only try to ease the pain by telling you exactly where you can find one. Duke Ellington’s watch, which Patek Philippe gave the inventory number P 1247, is located on the first floor of the Patek Philippe Museum in showcase 89. The address of the museum? Rue des Vieux-Grenadiers 7, 1205 Geneva; most definitely worth a visit because of the vast collection — around 3,000 pieces — of not just Patek Philippe clocks, pocket watches, and wristwatches, but also because of the presence of important and rare timepieces from different watchmakers that shaped and define the world of horology.

The Patek Philippe Ref. 1563 is the rare and more complicated variant of the Ref. 1463 chronographs. There are a lot of similarities between the two watches — for instance, the same water-resistant, screwed-in case back, the same 13-ligne base caliber, and similar round pushers to operate the chronograph. But the 1563 is twice the chronograph: it’s a rattrapante. And the 1563 is also much rarer than the 1463. There are just three known examples of the 1563, of which two were owned by famous people — the jazz legend Duke Ellington and the living watch legend Jean-Claude Biver.

The former Biver watch differs from the Ellington one in the museum because it has a pulsometer scale instead of a tachymeter scale. Both watches are extremely valuable, as you would imagine. The Patek Philippe Museum bought Duke Ellington’s Ref. 1563 at a 2013 Christie’s auction for US$1,593,396 after “fierce bidding” according to the records of the auction house. And in 2014, auction house Christie’s sold Biver’s Ref. 1563 (with movement number 862’420 and case number 630’552) for CHF 965,000. If both watches were to come up for auction now, in today’s heated auction climate, double those prices are low and risk-free estimates. 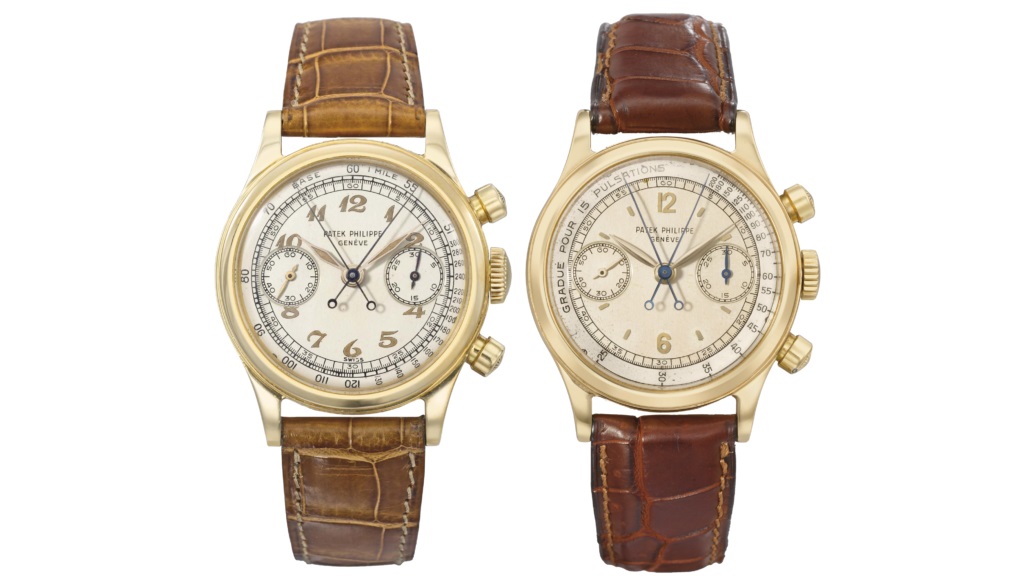 The third known Ref. 1563 on the left and Jean-Claude Biver’s watch with pulsometer on the right

I came to see the Ref. 1563 and talk about the watch with Dr. Peter Friess, the curator of the Patek Philippe Museum. And we did, but not in the way I expected. “The watches are the real stars, you know?” Dr. Friess said very early into the interview after just one sip of my coffee. It came as a bit of a surprise, but luckily, Dr. Friess elaborated both on the brand’s philosophy and the origin of the Ref. 1563 on the first floor.

“Duke Ellington bought the watch at the salon here in Geneva on July 28, 1948. Normally, Patek Philippe would direct an American client to a dealer in the USA because we don’t have a subsidiary there for nothing. But the great bandleader had developed a relationship with the salon here because of his travels. He bought the watch — quite an expensive watch — because he wanted the best possible watch. You could say it was the best of the best, for the best of the best. The philosophy of Patek Philippe is simply to create the best possible watch. And we sell them to people who can afford and appreciate them. The watches are our stars, not the people who wear them.”

The movement side of Jean-Claude Biver’s Ref. 1563 — Image courtesy of Christie’s

Not even John Lennon

A resolute philosophy leads to a firm statement that needs a bit of time to sink in, especially in a horological reality where brand ambassadors have such a prominent place. The Ref. 1563 is in the museum because it’s such a rare and important watch, not because it was owned by a famous person. Dr. Friess used another example of how the watch shines brighter than the person who wore it.

“We could have bought a watch that was once owned by John Lennon, but we didn’t. If we buy a watch at an auction or from a private person, it always depends on the watch, never on the owner.” 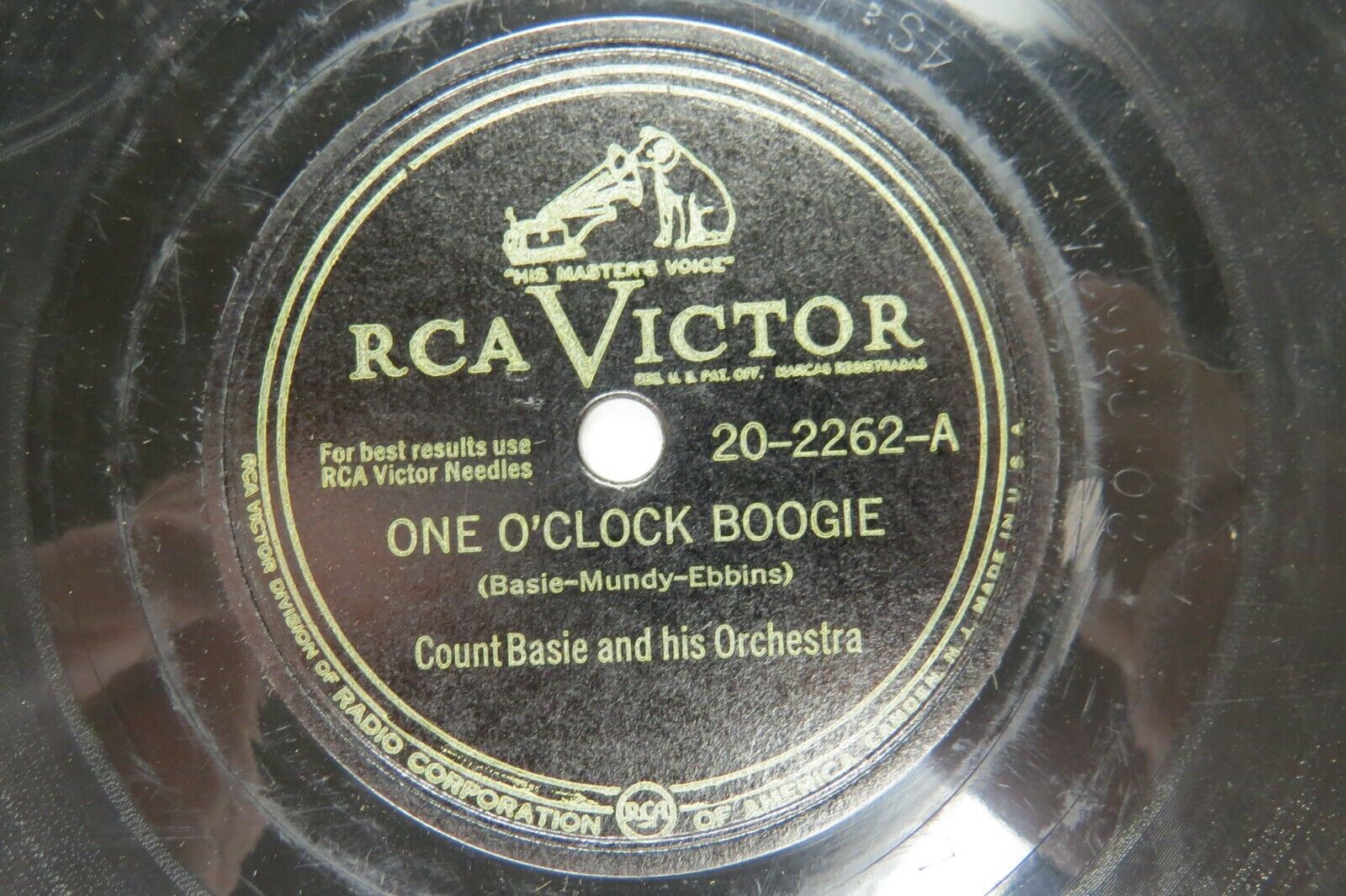 It explains why Duke Ellington, one of the most influential figures in the history of jazz music, is in the museum and fellow Patek wearers and piano giants Count Basie and Oscar Peterson are not. Still, as much as I understand the philosophy of the brand, since I wanted to write this story after listening to jazz, I need to get back on that track. And what track is better suited for this than “One O’Clock Boogie” by William James “Count” Basie (1904-1984), another Patek Philippe wearer? Did I find a picture? I already warned you that photos of watches are unfortunately scarce in this article, so no, I didn’t. 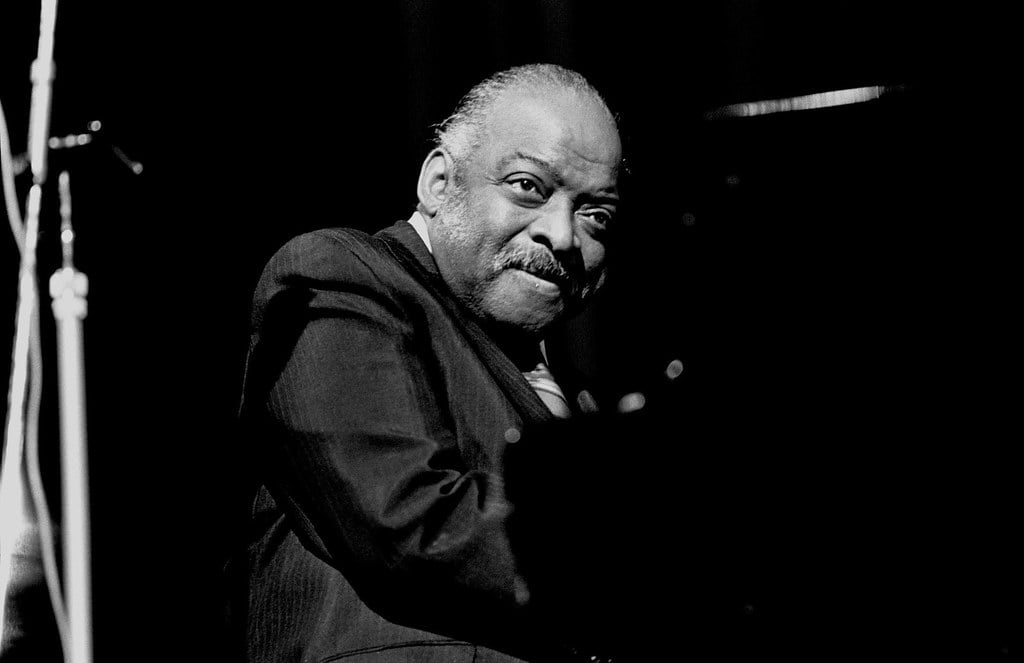 But I did find something else — something that fits this article incredibly well. I found the album cover of the record The Timekeepers, a collaboration between Count Basie and Oscar Peterson — aka “the Maharaja of the Keyboard”. In my imagination, the magical combination of the minimalist yet incredibly groovy lines played by Basie and the lyrical, virtuoso touch of Peterson is created with both cats wearing their Patek Philippe timekeepers.

Gifts from the manager

Interestingly, both pianists got their Patek Philippe watches from the same man, Norman Granz (1918–2001). The American Granz was an impresario, jazz record producer, concert promoter, and manager of, among others, Oscar Peterson. Granz was a guy of extreme opposites. He was once a member of the communist party and fought for equal rights, but he also enjoyed luxury cars, Saville Row tailoring, and high-end timepieces, and he even collected Picasso paintings. The man that founded the celebrated Jazz at Philharmonic concert series and the legendary jazz label Verve Records was also extremely generous. He gifted Count Basie the Calatrava. And Granz also gifted Oscar Peterson a rose gold Patek Philippe. I’d like to believe both the Calatrava and the chronograph were on the wrists of both pianists while recording The Timekeepers. 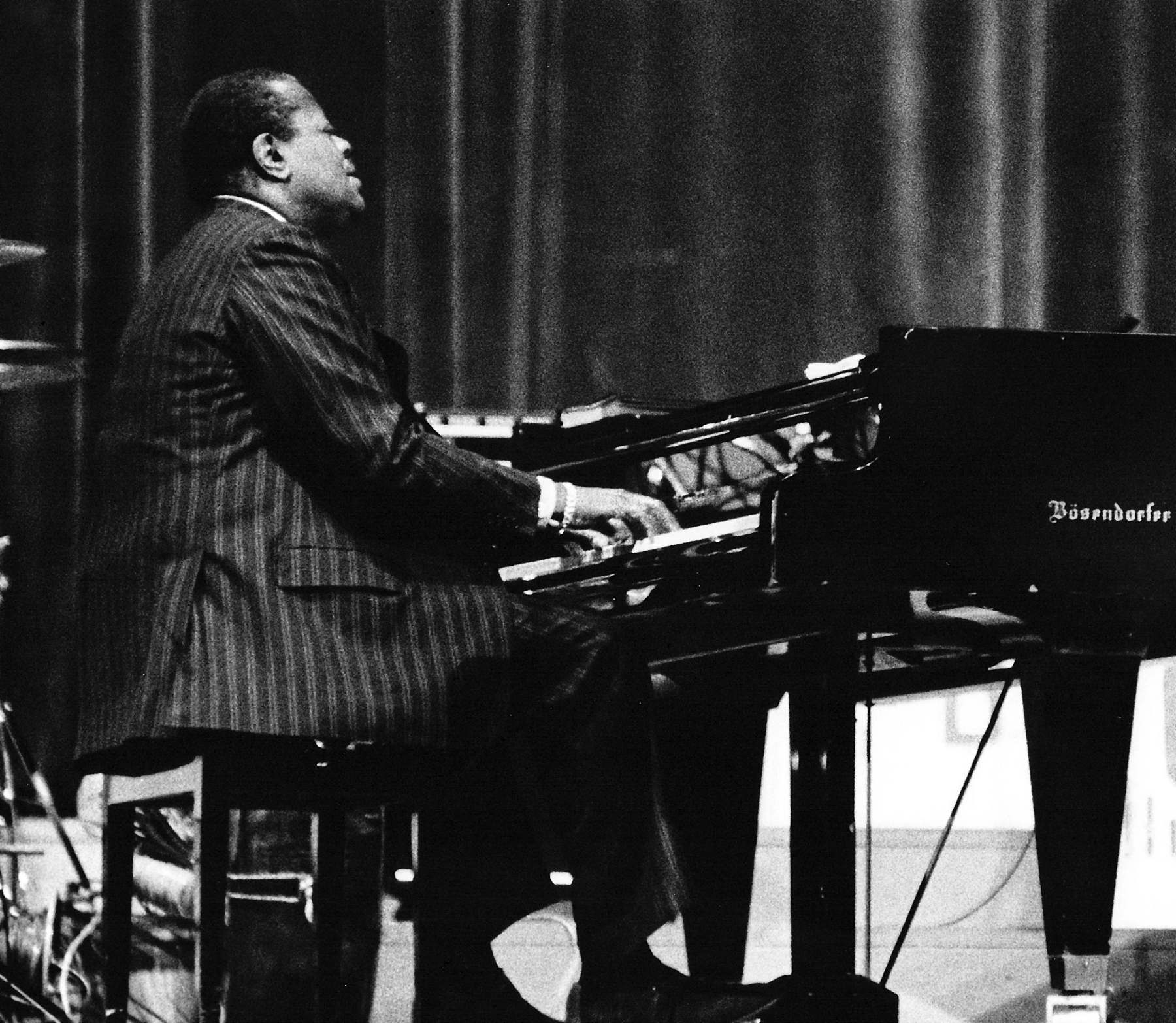 Oscar Peterson in Munich in 1977

The watch that Peterson got from Granz was bought in the 1950s at Chronometrie Beyer in Zürich. It was not just the two guys in the famed watch store, though. Granz and Peterson were in the company of Ella Fitzgerald (1917–1996), “Lady Ella”, the “First Lady of Song”. Granz bought both of them Patek Philippe watches. Fitzgerald, probably the greatest jazz singer who ever lived – that’s not just my opinion, but also lyric writer Ira Gershwin’s, singer Bing Crosby’s, and singer/bandleader Mel Torme’s — got a platinum and diamond wristwatch with a white gold bracelet. The watch disappeared after Fitzgerald died, but it could well have looked a lot like the platinum, diamond-set manually wound cocktail bracelet watch you see in the picture below.

Ella Fitzgerald and Oscar Peterson in 1959 at Amsterdam Schiphol Airport

Important watches getting lost is always a sad thing for horology fans with an interest in history. But it doesn’t always have to end this way. When Count Basie died, his Calatrava, with the inscription “To the Count, from Norman” on the case back, was offered for sale from his estate. It was Norman Granz, the man who gifted Basie the watch, who bought it, but not to keep for himself. Rather, he gifted it to Oscar Peterson — a man with a great passion for watches and an immense and diverse collection to show for it — who treasured that Calatrava for the rest of his life.

Count Basie’s Calatrava is most likely still in the possession of the Peterson family today and therefore not on public display, unfortunately. But Duke Ellington’s watch is. And although the watch is considered the star by Patek Philippe, in this final paragraph, I dare to argue. Sure, there are only three known Ref. 1563 split-second chronographs in existence, but there was just one Duke Ellington. Nobody can argue with that.