Perrelet Cannonballs Into Summer With Its Latest Release, The Turbine Yacht

Man, what a watch world we live in these days. Instagram. Hype. Waitlists. Premiums. Whether we like it or not, these are factors that have largely come to define the most popular segments of the collecting scene. As a watch brand, it can be a tricky landscape to navigate. What, exactly, do you do to survive? Do you humble yourself, observe the trends, and allow the desires of the market to dictate your offerings? Or, do you double down on what you do best and resolutely forge ahead?

Good question, especially since both options may lead to absolute doom. Give the people too much of what they “want”? You run the risk of becoming yet another chided bandwagon jumper. Let your hubris get the best of you? You could face rejection more soul-crushing than that last time I tried to get a girlfriend in university (yeah, let’s not talk about that…). As is probably painfully obvious from that last comparison, I’m no genius when it comes to these decisions. But, let’s face it; it never did anyone any good to dither on forever. In the end, you might just have to pick a strategy and go balls to the wall. Perrelet, with its latest additions to the Turbine Yacht line, has done just this. Taking an uncompromising stance in its design language and execution, the brand has doubled down on its vision of what a summer maritime watch should be. 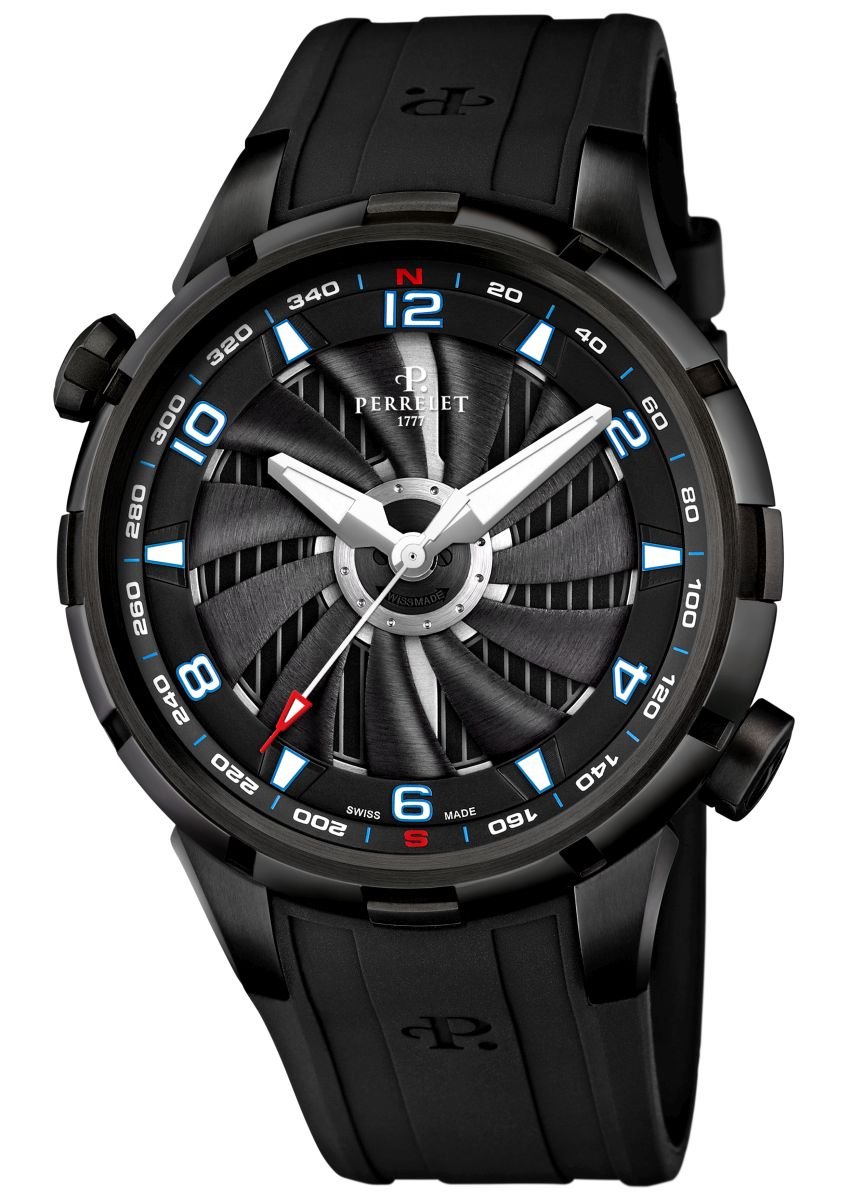 A leviathan of style

Let’s just get one thing out of the way: the Turbine Yacht is unapologetically large. Measuring 47.5mm wide and 15.45mm thick, it would certainly be more appropriate for the manly-wristed among us. Deeply machined rectangular channels on the bezel carry down through the sides of the case and onto the case back. This vertical sectoring technique is one the brand has implemented in many of its cases through the years. The watch has two large crowns, with one for time setting and the other for operating the inner compass bezel. Their size is appropriate, and their opposite positions at 10 and four o’clock give the piece a nice sense of balance.

While quite large, the entire case and both crowns feature a brushed finish. This choice does, at least to me, indicate some level of restraint, and makes the watch appear less flashy than a mirror polish would. With these latest additions to the line, Perrelet offers both a stainless steel case with a blue dial and a black PVD case with a black dial. Inboard of the color-matched compass bezel, we see a raised chapter ring. On it lie luminescent Arabic numerals for even hours and nautical pennant flag-shaped indices for odd ones. Their shape is reminiscent of the indices on the Corum Admiral’s Cup, and it is a fitting touch for a yachting-themed watch. Large luminescent hands in a contrasting bronze or silver finish assure that the watch remains quite legible. 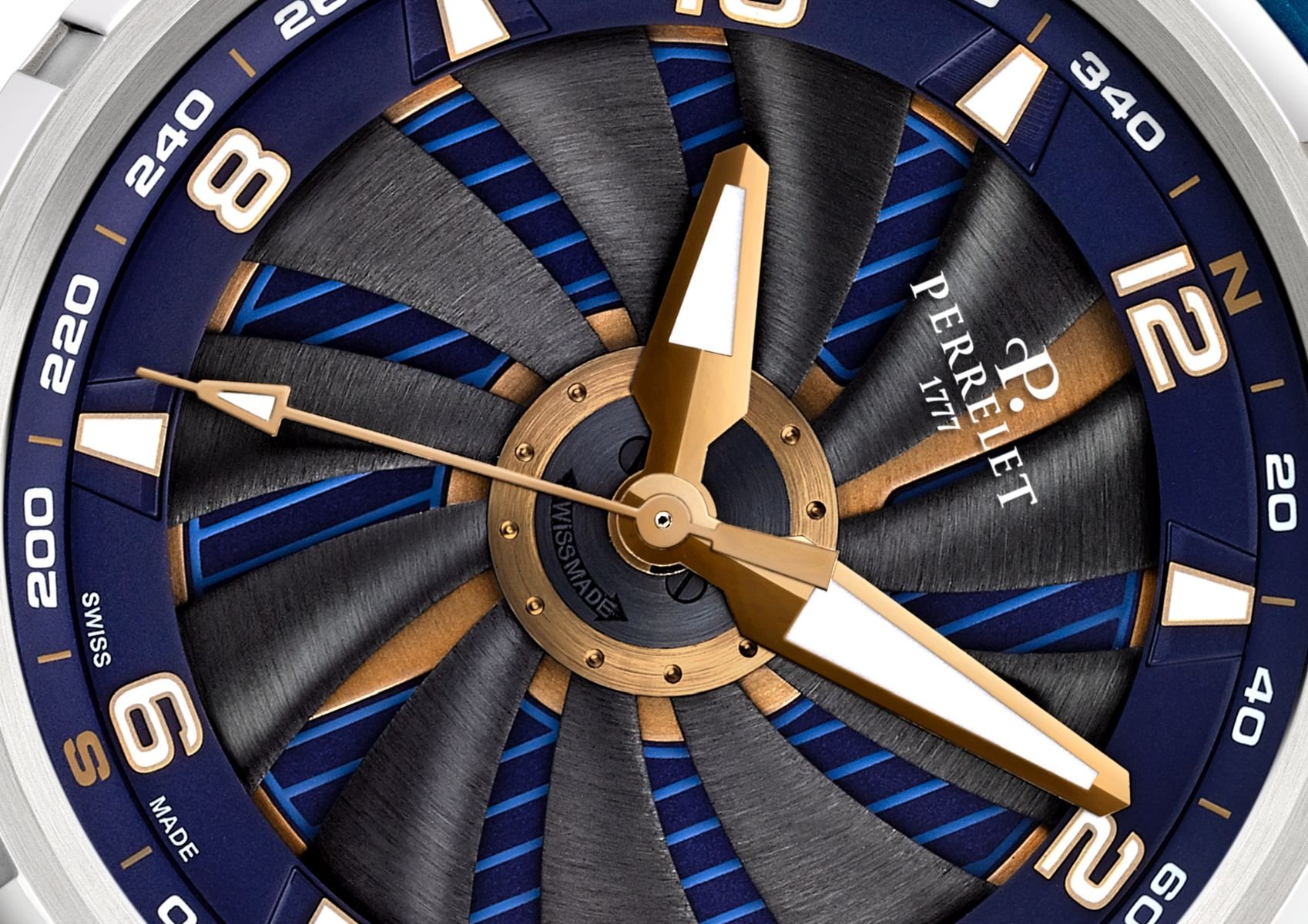 Other than its sheer size, arguably the most visually intriguing element of the watch is its namesake turbine. Finished in black PVD on both versions, the 11-blade turbine spins in both directions with the movement of the wearer’s wrist. If that sounds familiar, that’s because it is purposely intended to celebrate the automatic winding rotor. Since 1995, dual rotors on the front and back of its watches have been a stylistic calling card of the brand. Perrelet is so fond of this mechanism because its figurehead, Abraham-Louis Perrelet, is widely credited with the invention of the first automatic rotor in 1777. In an attempt to maintain as much journalistic integrity as possible, I must say that for me, the jury is still out on that claim. It is one, however, that Perrelet is nevertheless proud to stand behind.

I intend to explore the rotor’s attribution to Abraham-Louis Perrelet further in an upcoming installment of our How Watches Work series. For now, however, suffice it to say that the front rotor, or turbine, has certainly become the most recognizable symbol of the Perrelet brand. In the Turbine Yacht, the mechanism rotates above a vertically striped dial, the design of which mimics the teakwood decks of the seafaring vessels. I must say that on the steel-cased version, the contrast between the royal blue dial and the bronze hands is an aesthetic that I find very appealing. 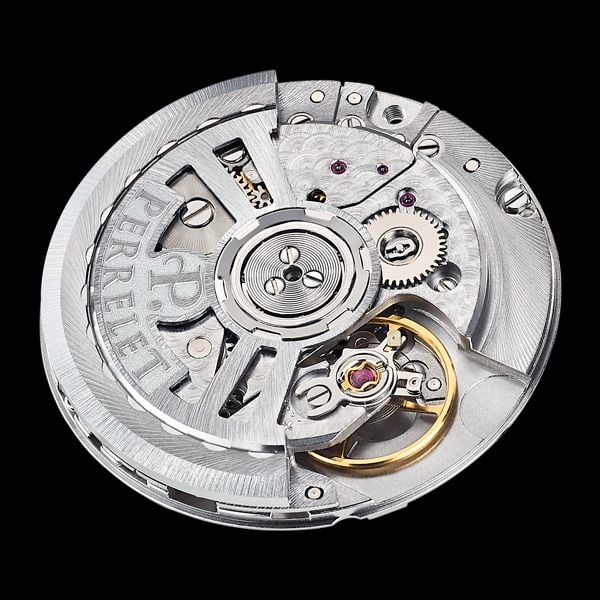 Inside, the watch features the P-331 movement. This Perrelet-exclusive caliber is produced by Soprod, Perrelet’s sister company within the Festina group. Because the subsidiaries within the group work so closely together, Perrelet refers to the P-331 as an in-house caliber. It beats at 28,800 vibrations per hour, has a 42-hour power reserve, and features perlage and sandblasted finishing and a semi-skeletonized Perrelet rotor.

The Turbine Yacht comes on a rubber strap with ends curved to match the case and lug tips. In addition to fitting the water-going theme, the strap gives the whole watch a nice integrated look and saves it from potentially appearing too top-heavy. Not only does the watch look the part, but it is indeed water-resistant to a respectable 300m. While some yacht-themed watches are content to provide 100m of water resistance (you’re supposed to stay on the yacht, not in the ocean), the Turbine Yacht provides a more-than-adequate depth rating for any type of water activity, including scuba diving. 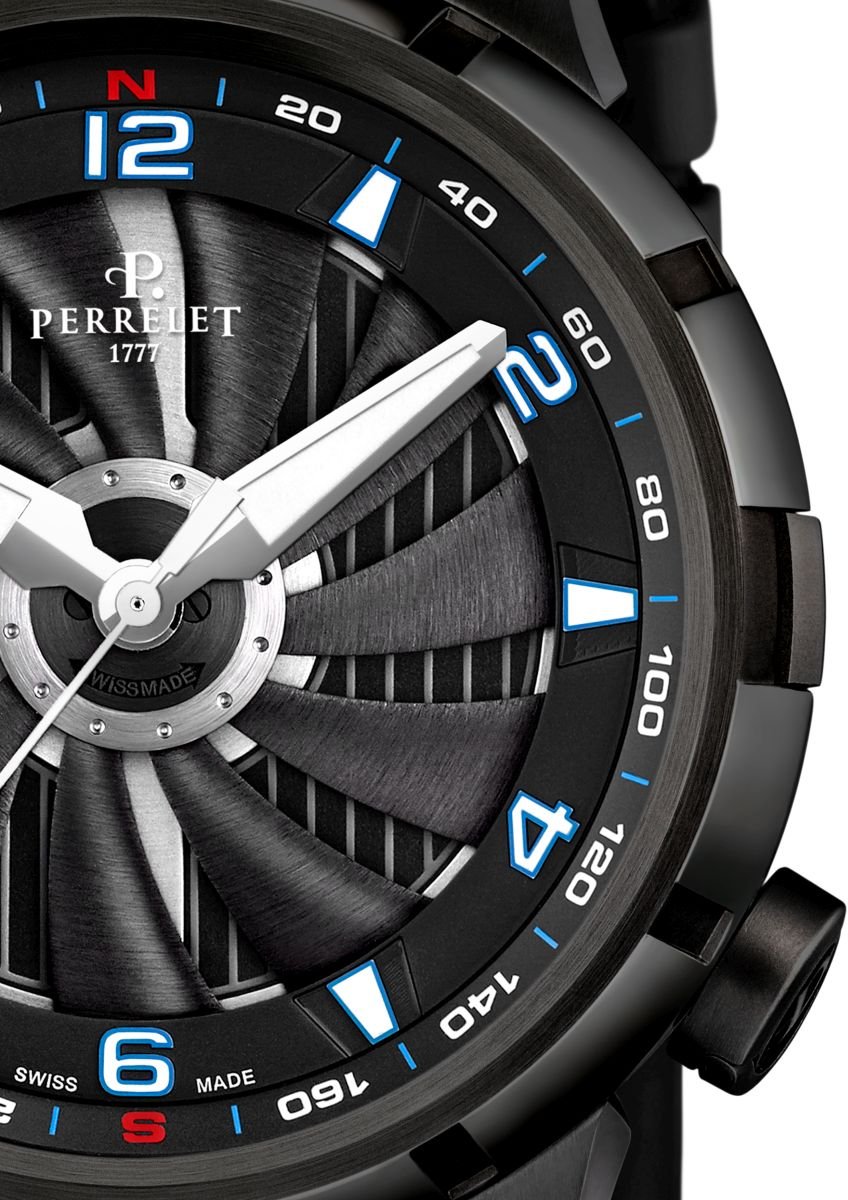 The retail price of the Perrelet Turbine Yacht is 5,580 EUR, and it is available at Perrelet boutiques worldwide. Unlimited in production, it should not be too difficult to find one if you feel like the Turbine Yacht is the right watch for you.

Ultimately, though, that’s the question it all boils down to: is the Turbine Yacht the right watch for you? For better or worse, Perrelet has chosen its artistic direction with conviction. In a world where tastes are ever-shifting toward more traditional case sizes, a 47.5mm watch could face an uphill battle. The price point is one rife with competition in the dive watch genre as well. Names like Breitling, Omega, and Tudor all bring offerings to the table at or around the 5,000 EUR mark. Arguably, though, none of them are quite as unique as the Perrelet Turbine Yacht. 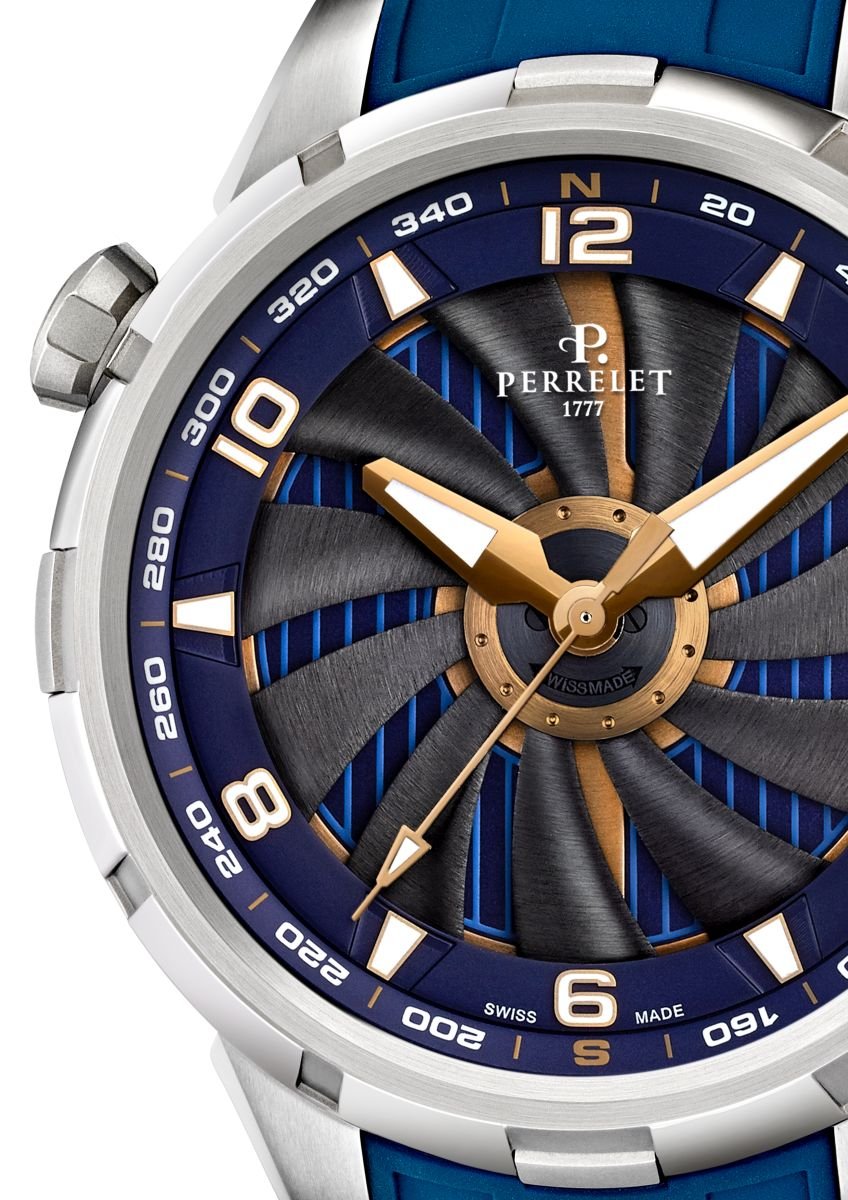 From its spinning turbine in front to its dauntless dimensions, the Turbine Yacht no doubt screams personality. As the brand only makes around 10,000 watches per year, it’s pretty evident that Perrelet is not in business to appeal to everyone. But, for the collector blessed with he-man wrists, an independent spirit, and a taste for the eclectic, the Perrelet Turbine Yacht could indeed be the next brilliant water-going wrist companion.

Let us know what you think of the Turbine Yacht in the comments below. For more information on this watch and its other offerings, check out Perrelet’s website here.