The question is, could I pull it off?
Thor Svaboe
comments 2
Share

When Piaget created the Polo in 1979, the aim was everyday sophistication. But the new Piaget Polo Skeleton Diamond Paved is anything but an everyday watch. Could I wear this delectable Piaget? That is the question of the day. I am a 6’2 Norwegian with a beard, just back from hacking big lumps of ice and snow from my car (feel free to stereotype me). I’m not a big fan of the term “metrosexual”, which is what came to mind when I saw the first images of this new Piaget in white gold. Could I pull it off?

While writing this, I am wearing a Seiko Marinemaster 300, one of only two 44mm+ watches left in my collection. Did I put it on today to saw a hole in the ice and go diving with my speargun? No, I put it on because I love it despite its massive size, and it matches my blue shirt rather well. On my right wrist, I have a matching beaded bracelet (well, two), so yes, I am very vain. And to be honest, I do tend to gravitate towards the slimmer 38-40mm watches in my collection. Does that make me a prospective customer, or are diamonds just a step too far? 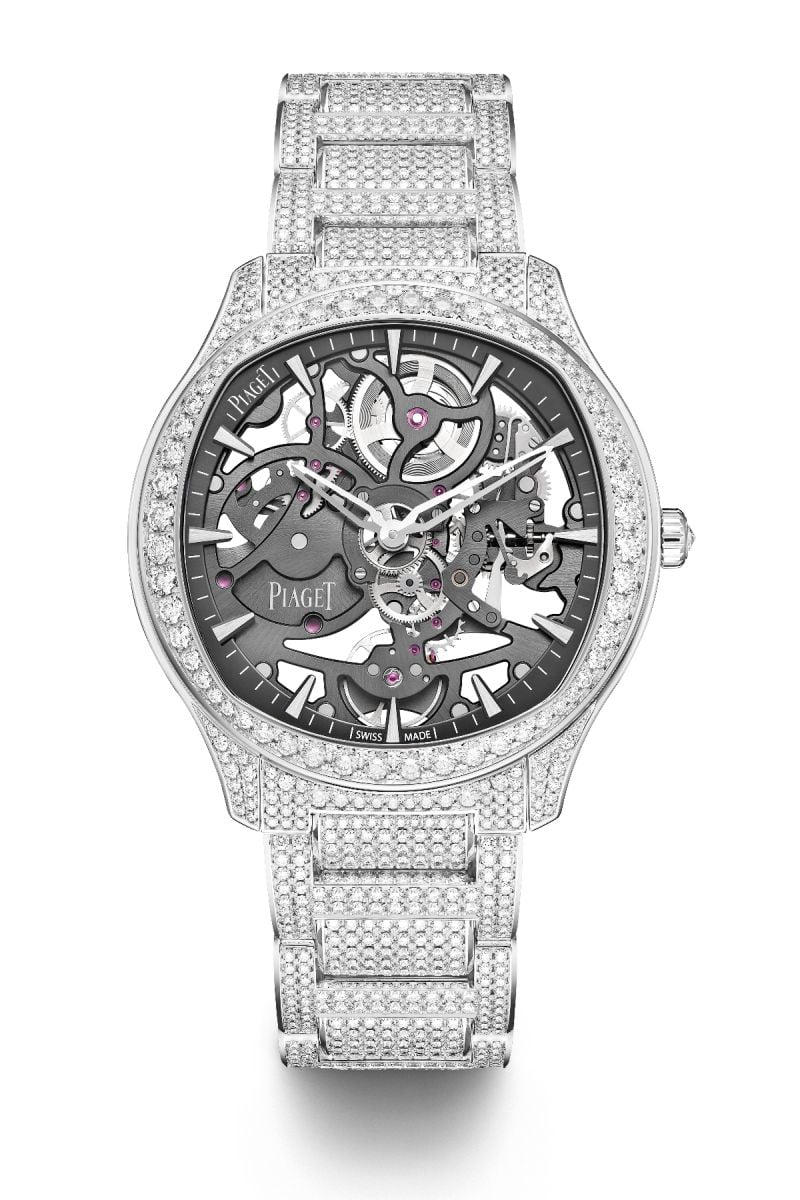 Diamonds are a girl’s best friend, or so the very politically incorrect saying goes. So what about us men? After this b*stard pandemic, I long for dressing up again and attending a meeting with a nice dress shirt and a slim suit jacket on. And under those slim cuffs, maybe there could actually be a twinkle of diamonds… What do you think? I do think so, but the thing is, the new Piaget Polo Skeleton is a lot more than a mere twinkle. This wafer-thin 42mm case has a mind-bending total of 1,746 brilliant-cut diamonds. This light show does its best to distract us from what is an equally stunning movement. The suave gray tone of the 1200S1 caliber is a stark monochrome contrast to the blinding light of nearly 2,000 diamonds. 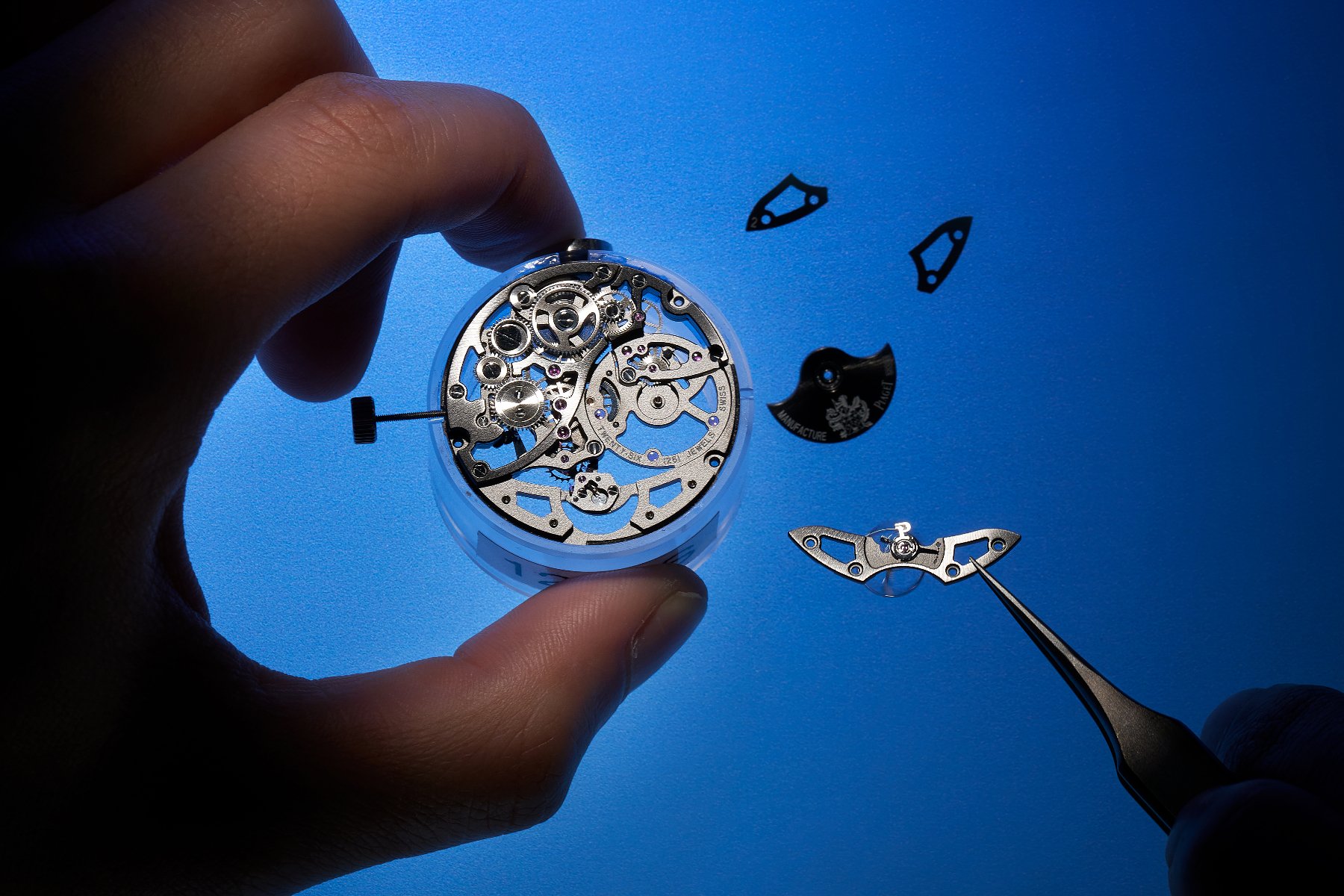 Am I man enough for a gem-set watch?

This watch begs for this kind of question, but seriously, consider it. From a craftsmanship perspective, the new Piaget Polo Skeleton is a tour de force. No matter whether I think I can pull it off or not, there is no denying its value as a halo watch for Piaget. Some of you will find the glitz overpowering, and the emphasis too far into the world of jewelry — so be it. It only takes one look at the movement within the recognizable cushion-like case and you’ll respect it. Add the 7.35mm slimness to that, and you might even find yourself desiring this piece. Is the new Piaget Polo Skeleton the ultimate guilty-pleasure watch? 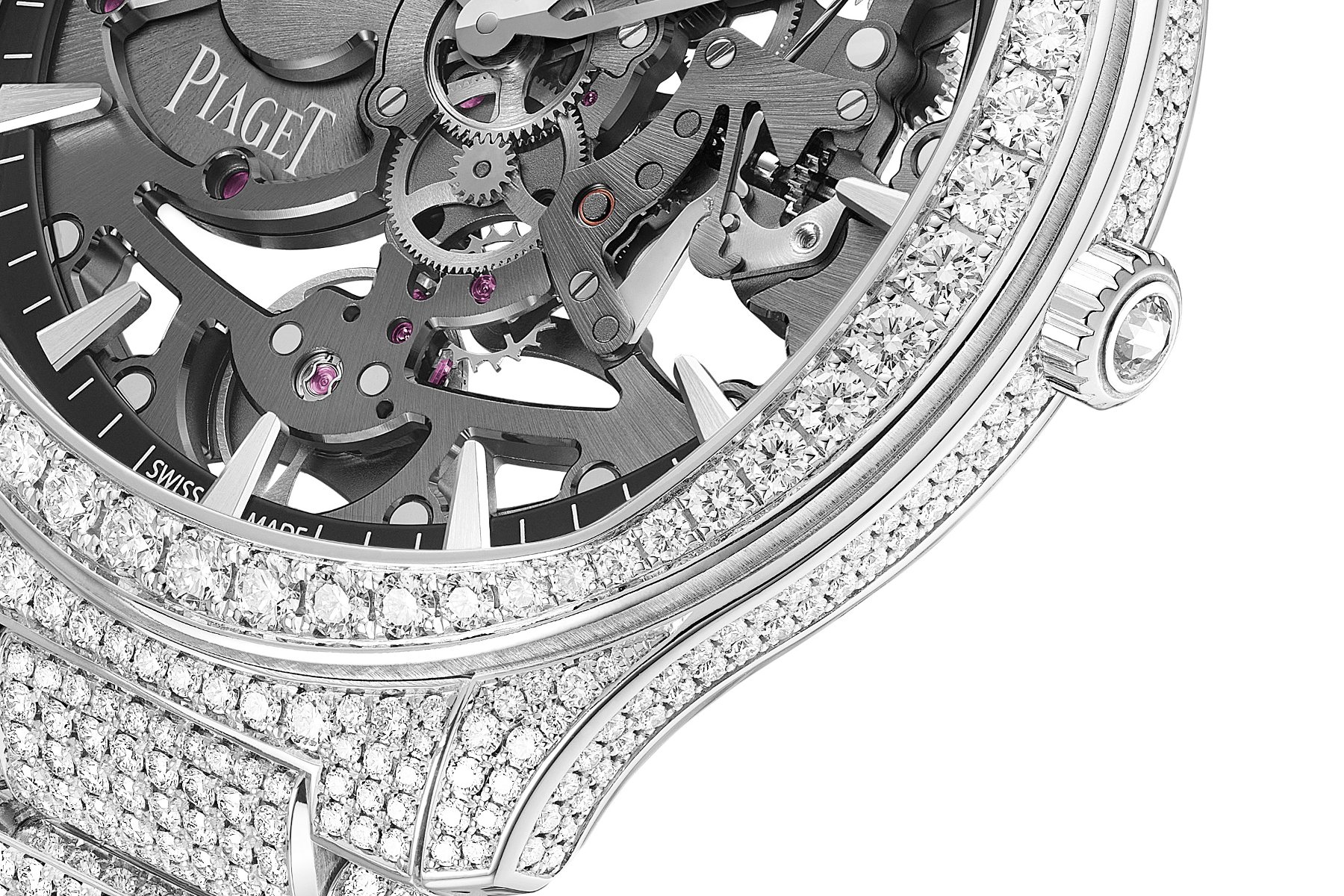 Dress up and feel the vibe

The best designs in the world would be nothing without contrasts. An Eames chair set within the frame of a New York loft apartment’s rough brick walls, or a bearded Viking with a gem-set Piaget… Just imagine a client meeting I’ll attend at my day job, wearing a dark blue linen-mix shirt and a wool blazer with some Neuw jeans. Out of my cuff slides the Piaget Polo Skeleton, glinting like mad in the showroom lighting. I would actually enjoy that a lot, but there’s a flip side to the coin. How can I deny my dealer the extra discount on a big project when the watch says I make too much off their sales? Diamonds can send the wrong signals, but not at a cocktail party in the right setting. Wearing this watch with a toned-down suit and a beard would be absolutely priceless. And that is the customer Piaget wants — the one who simply appreciates the oft-misused term “art for the wrist” and doesn’t care about the connotations or signals it may send. Perhaps this laissez-faire attitude is what we need more of in a post-pandemic 2022. 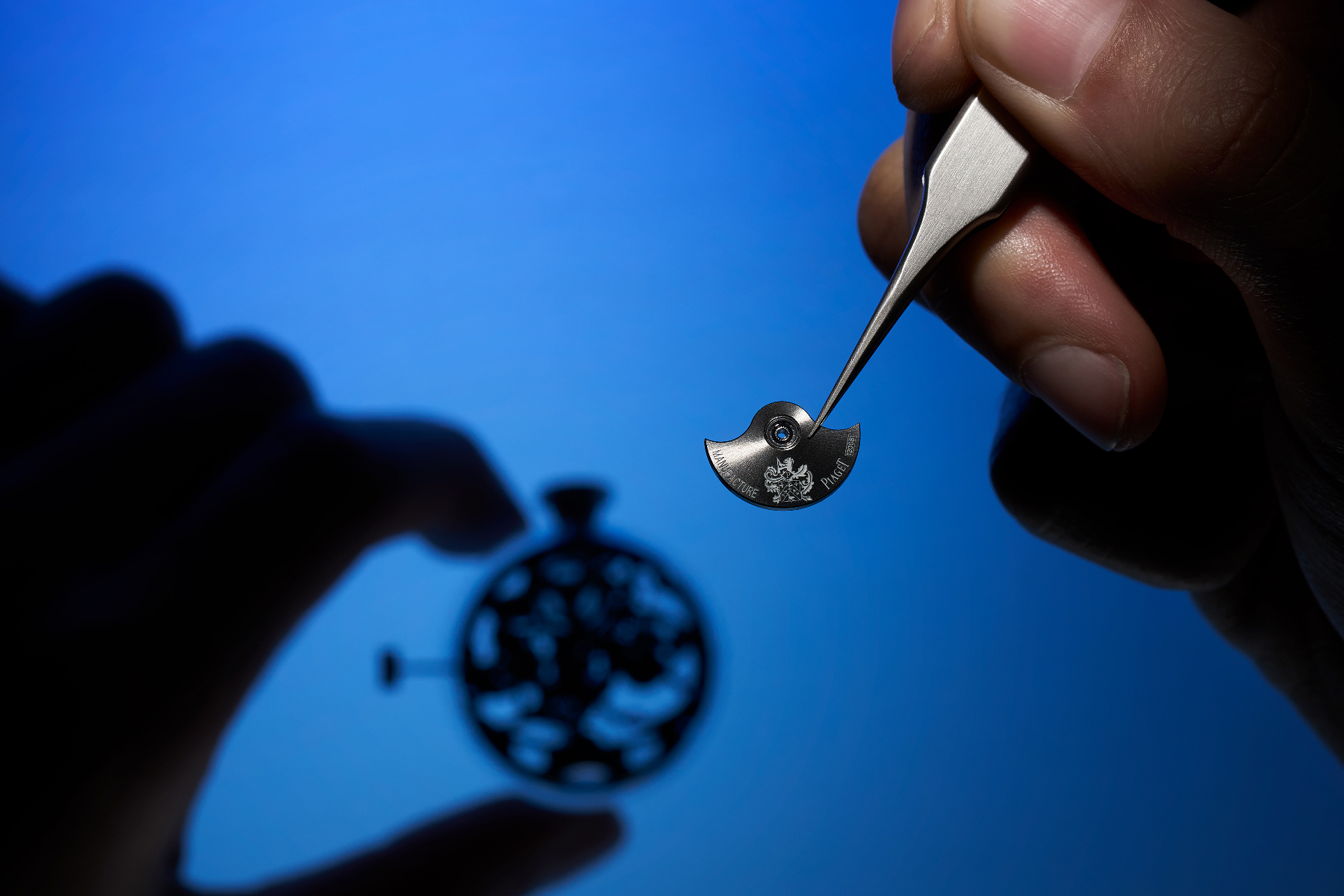 A caliber worth a glimmering introduction

Yes, the Piaget Polo Skeleton might blind you with its reflections, but this is equally about the new 1200S1 caliber, a reworked version of the 1200S. Inside this 30m depth-rated case, the impossibly thin micro-rotor movement has a 44-hour power reserve. The off-center oscillating rotor at 8 o’clock sits within an intricate web of gray bridgework. The visible purple of the caliber’s jewels cheers up a monochrome-cool scene of constant movement. A black rehaut brings a sporty focus to the life within, with slanted spearhead indices overhanging the open-worked heart. Even the recognizable Piaget Polo form of the broad sword hands are cut-out, accentuating an airy look of mechanical prowess. 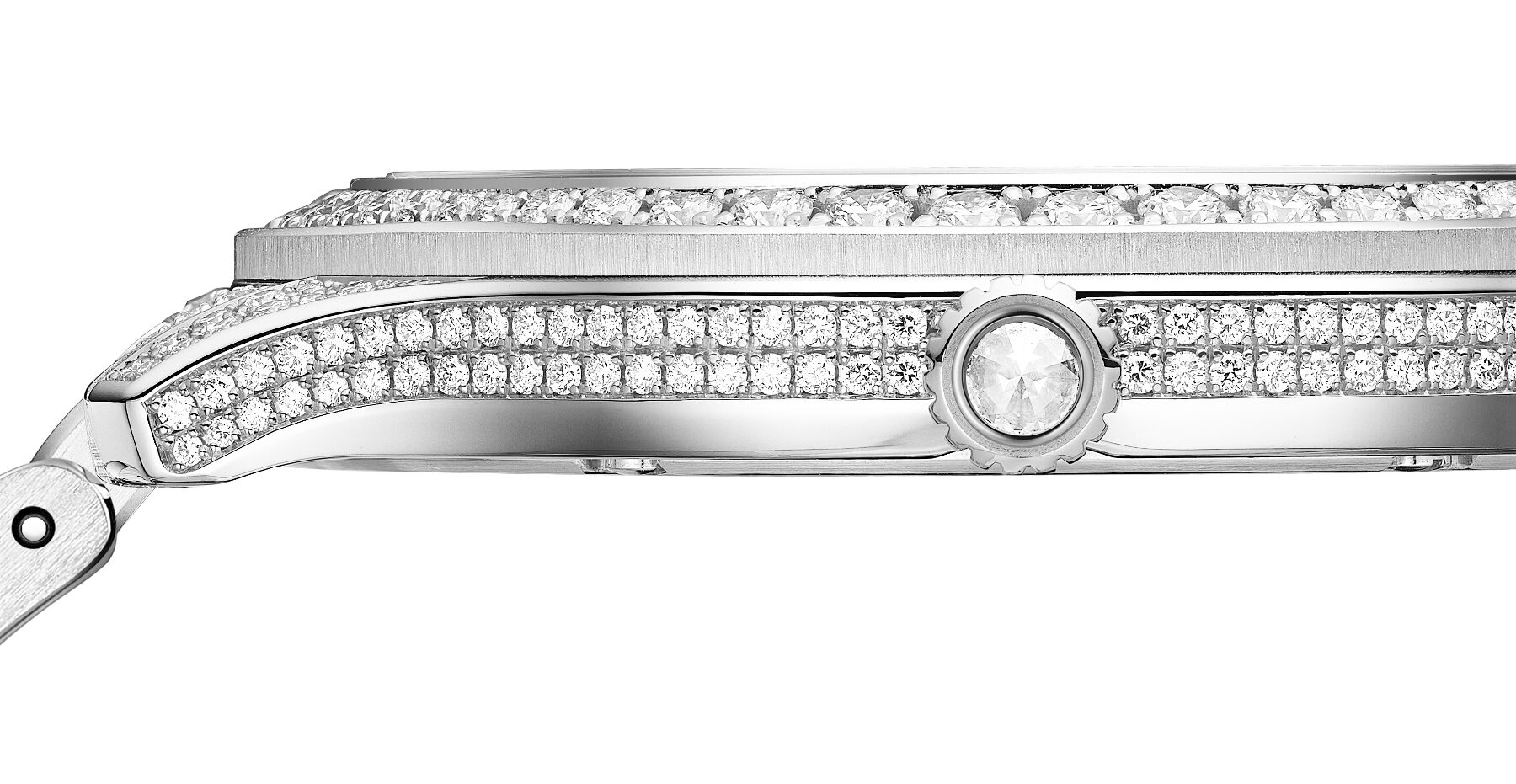 Thin and rather brilliant

The magic trick will become most apparent should you look at the watch head-on, trying to avoid the glittery distraction of 1746 gem-cut stones. Turning the 42mm case around will repeatedly make you respect the research that went into reducing this to less than 8mm. I know, by actually admitting to a touch of diamond desire, you might think me a fool. Me, I simply see past the shallow connotations of the world of light refractions and see the work within. I will never possess this watch, but that is not the point.

The 61 hours it takes the “Atelier Extraordinaire” to complete the gem-setting of each case and bracelet inspires deep respect. The final touch of a reversed diamond in the crown of the Piaget Polo Skeleton says it all. Yes, I’ll happily do a “Week On The Wrist” and suit up every damn day. This Piaget Polo Skeleton, my friends, is worth it, if only for the sliver-thin feel of opulence. The price? Well, that’s to be determined, but I think you can guess that it won’t come cheap.

Could you pull it off?

So, did the new Piaget Polo Skeleton Diamond Paved give you a taste for glimmering gems? If it did, just admit it, or tell us that it awakened your lust for ultra-thin, even if manifested in a more toned-down fashion.