Today, at the SalonQP event in London, Pinion introduces their Pinion Revival 1969 watch. A handsome looking stainless steel chronograph with a new old stock Valjoux 7734 movement. It is the first chronograph in the Pinion collection, and they surely did it in the right way we think.

The name of the Pinion Revival 1969 refers to the year that this hand-wound Valjoux 7734 movement was produced. More on that later on. Let’s have a look at their watch first. 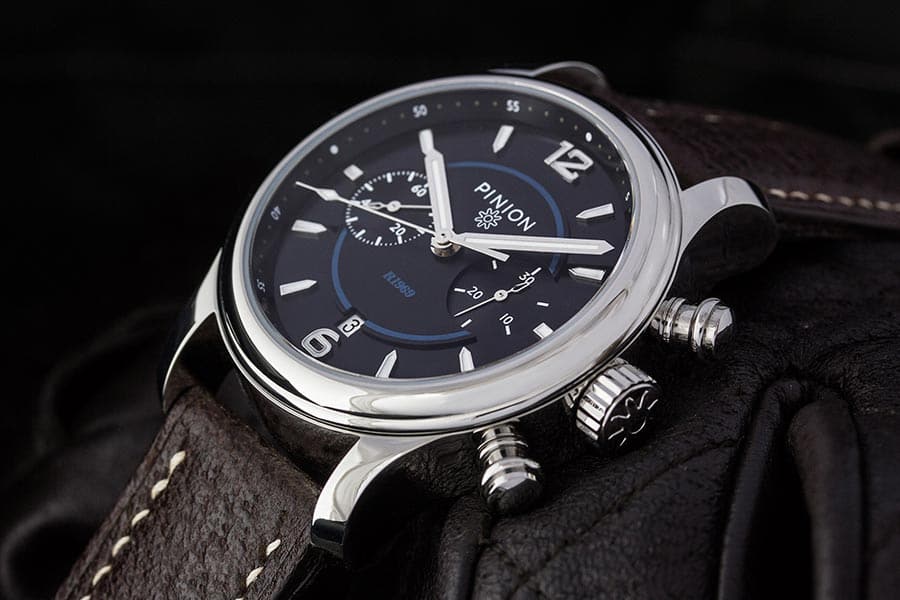 Pinion is a relatively young brand, founded in 2013 by Piers Berry. Their goal is to create limited numbers of watches for those who have an eye for detail but also for those who want to have a watch that they can wear on a daily basis. The eye for detail that has been used and the high level of quality that Pinion puts in every aspect of the watch (from the hands and dial of the watch to the hand-made strap) is sometimes difficult to explain to people who have never seen their watches in the flesh or just look at the specifications of a watch and the price tag. Pinion watches need a bit more attention from watch enthusiasts to acknowledge the high quality of basically everything they do.

With this Pinion Revival 1969 watch (that we already introduced to you in September, but without photos of the final product), we admit that it has become a bit easier to see the level of detail – based on photos – they’ve put into it then with their Axis collection for example. The 43mm stainless steel (316L) case for example, has a high polished finish and fitted with an exhibition case back. As Piers Berry explains, “a hand-wound chronograph invites and requires a high degree of human interaction. So the ‘contact points’ become important from an ergonomic and operational point of view. That’s why we paid special attention to designing and making our own bespoke pushers and crown to provide a positive action and wearer feedback.”. As you can see on the photos, the pushers have an interesting design and the crown carries the Pinion logo.

Not only the hand-wound movement should make you think of the watches from 45 years ago, also the design of the case with its double bezel should bring back the thought of those vintage chronographs.

The dial of the Pinion Revival 1969 is an interesting piece of work as well. A dial needs to be as clean as possible in our opinion, especially when it is a chronograph. That’s why we like the dial of a Speedmaster, Daytona and Flieger Chronograph so much. The Pinion Revival 1969 has an all black dial with three different levels to create an interesting depth or  – as you wish – 3D view. It is super legible due to the different sections and multiple levels for reading normal time and the recorded time. At 6 o’clock you will find the date aperture. You could say that the date disc should be black and have a white numeral printed on there, but the white date disc is not disturbing at all since it matches the white printing on the dial and white luminous material. 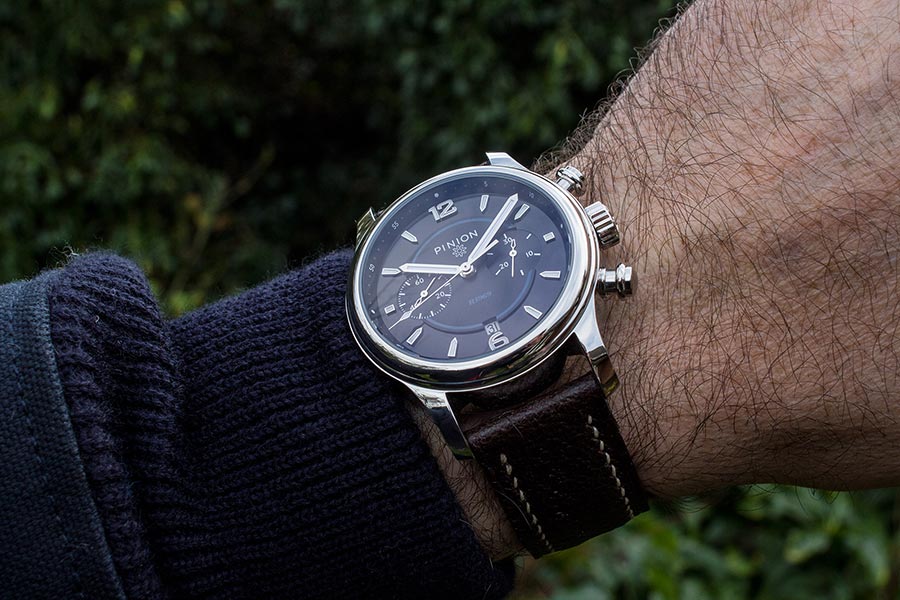 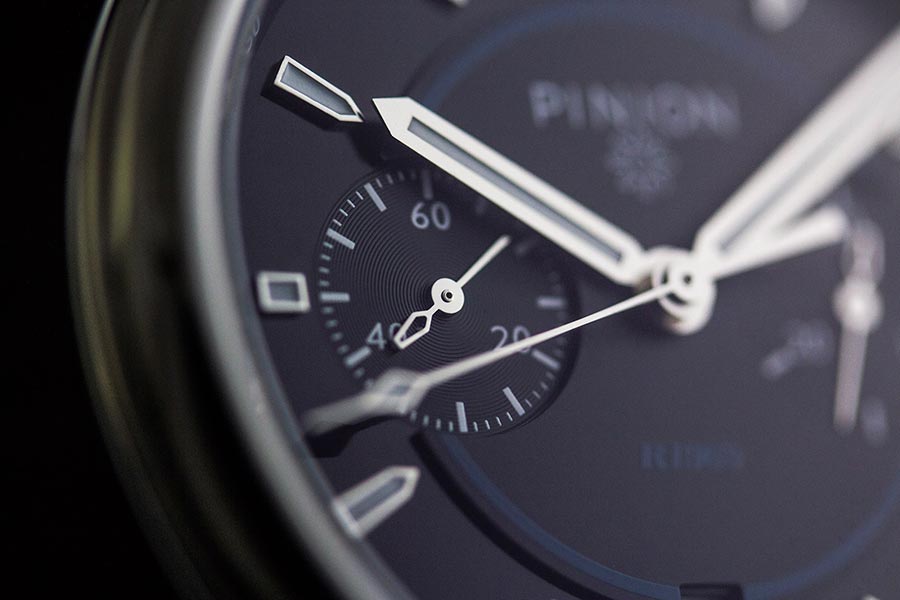 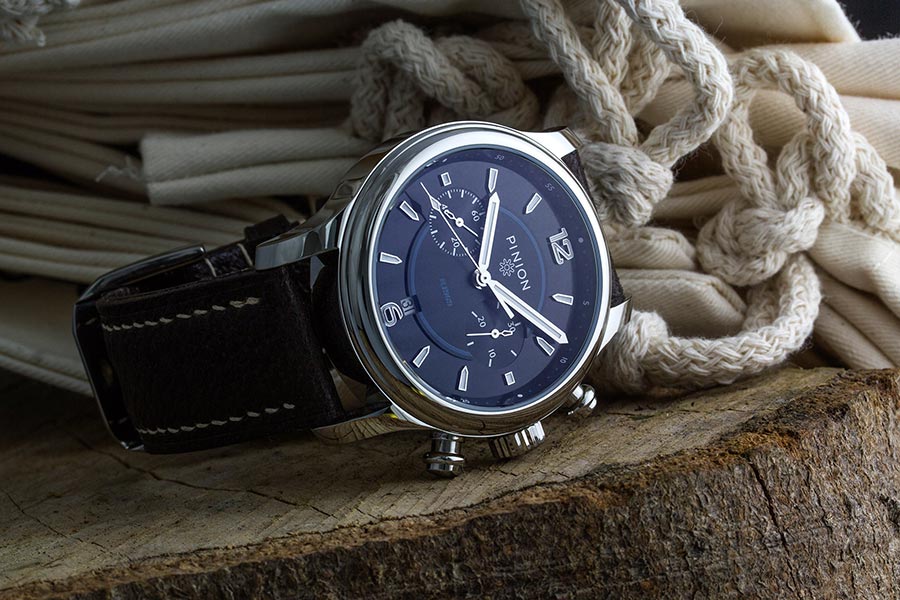 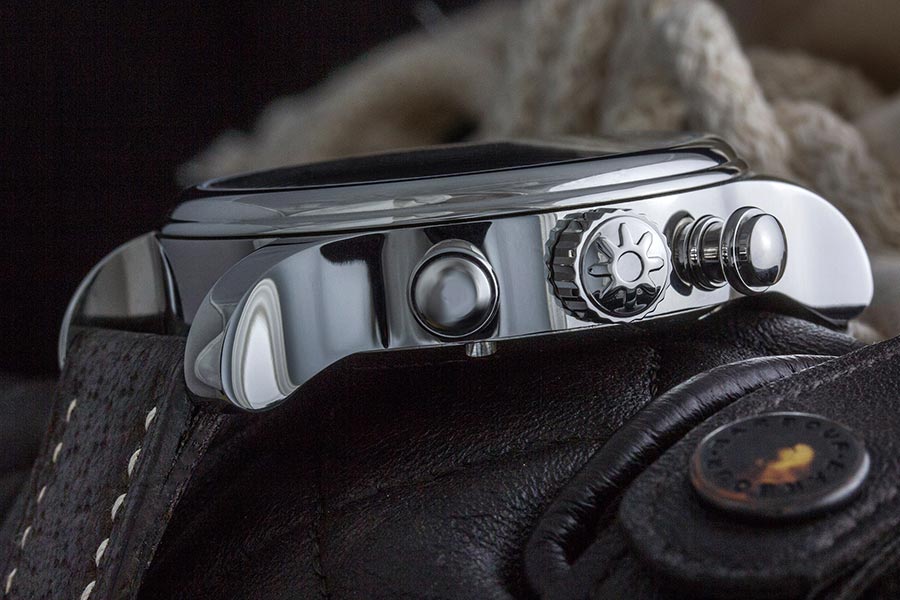 For those who are more interested in the technical aspect (movement) of watches, the Pinion Revival 1969 has enough to offer. Pinion was able to secure a stock of Valjoux 7734 in unused and unassembled (Ebauché) condition. A rarity on its own, but you must know that the people behind Pinion are watch enthusiasts for a long time and have their connections in Switzerland since a long time (and not only since 2013).

These vintage Valjoux 7734 movements were packed and shipped to the United Kingdom where the entire assembly and testing procedures took place. The grey smoked sapphire crystal of the exhibition back of the watch will enable the owner of the Pinion Revival 1969 a look at this 45 year old movement.

As a reminder, we show you the overview of 10 interesting facts of the Valjoux 7734 movement again that we also published in the official press release of two months ago.

Ten Facts about the Valjoux 7734

With the Pinion Revival 1969 you will wear a piece of history on your wrist, while brand new. Another thing to consider is the servicing of this movement. Probably till the end of days, movement parts and qualified watch makers will be able to service this Valjoux movement – despite being 45 years old. You can ask yourself whether this would be the case with a watch of a young brand with an in-house developed and produced movement. Just food for thought. 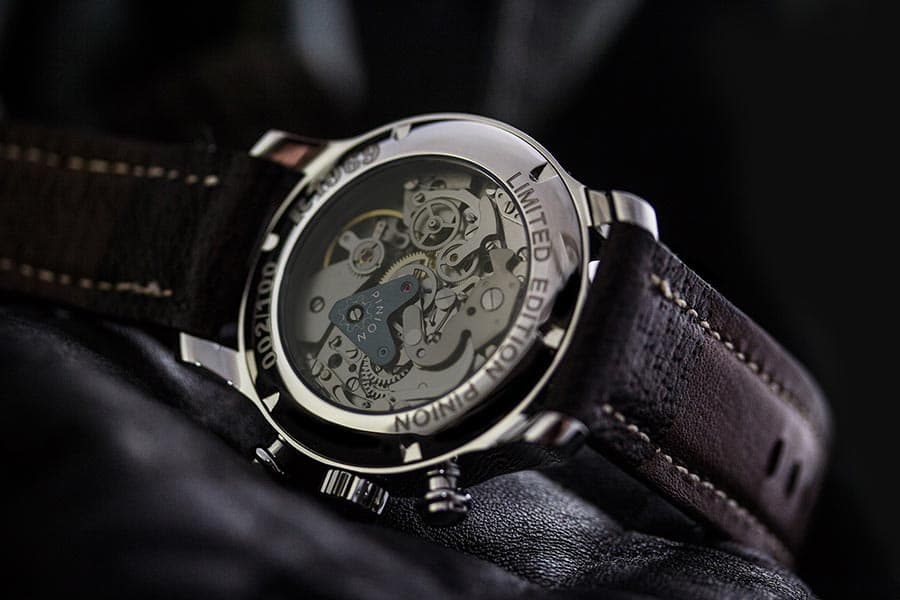 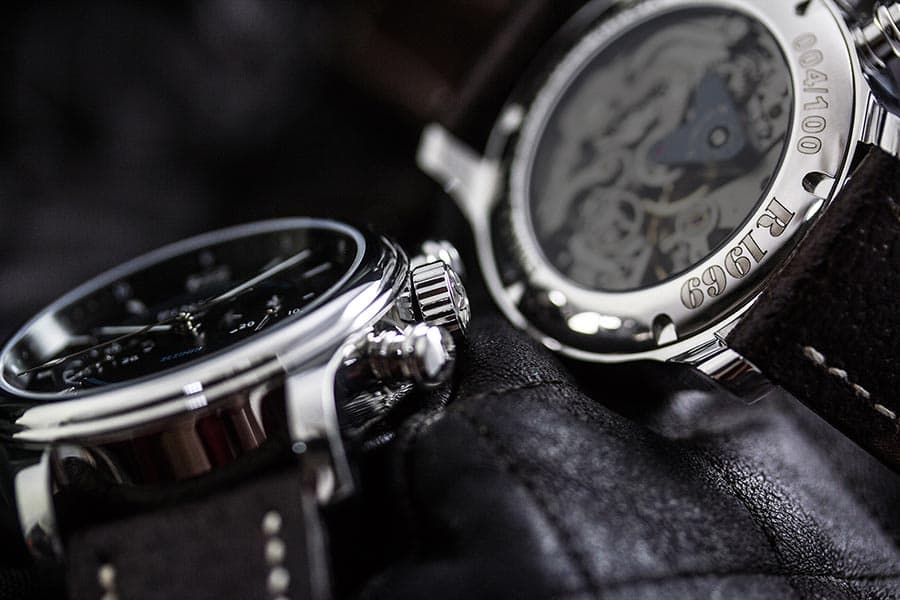 The Pinion Revival 1969 (or Pinion R1969) can be ordered right-away and first orders are expected January 2015. The Pinion Revival 1969 will be limited to 100 pieces only. All watches are delivered with a (UK) hand-made leather strap and come in a large handcrafted solid wooden box finished in high gloss piano black with polished chrome-plated hardware and soft blue inner lining.

The watch comes with a two year warranty. More information can be found on www.pinionwatches.com

Prices are as follows:

All photos can be clicked for larger views. See the gallery below.