SEE TIME FROM BOTH SIDES 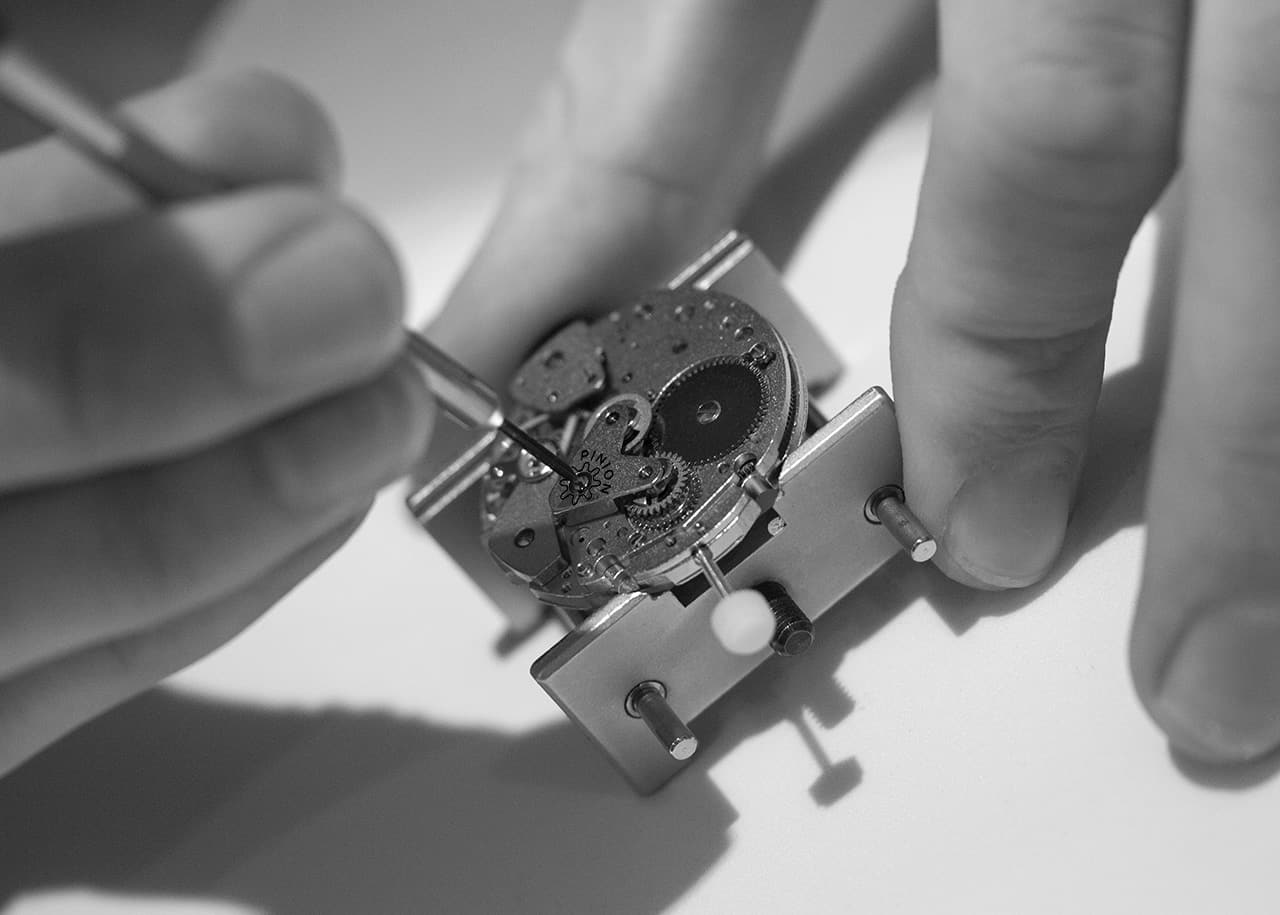 Pinion is pleased to announce its first chronograph wristwatch. A contemporary re- imagining of the possibilities for the iconic Valjoux 7734 handwound movement, the Pinion Revival 1969 (R1969) allows the wearer to see time on both sides of the watch.

On the front, present time. Hours, minutes, seconds and date display – along with classic chronograph stopwatch registers – appear against a multi-layer, contrast finished black dial with milled, polished and applied indexes and numerals.

On the reverse of the watch and visible in full through the grey smoked glass exhibition caseback, we see time as it was measured in the past, in the form of a beautiful NOS Valjoux 7734 hand-wound movement from 1969. 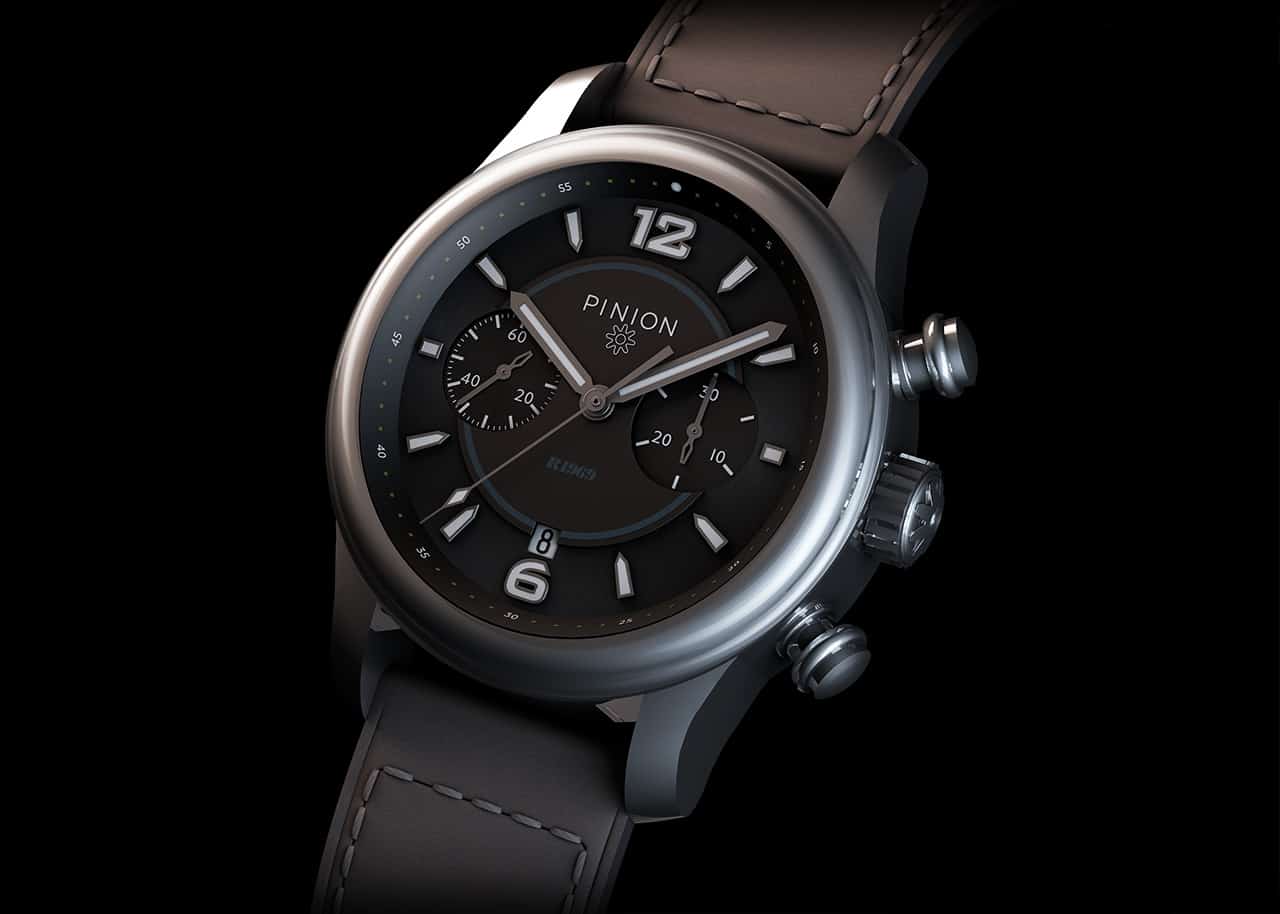 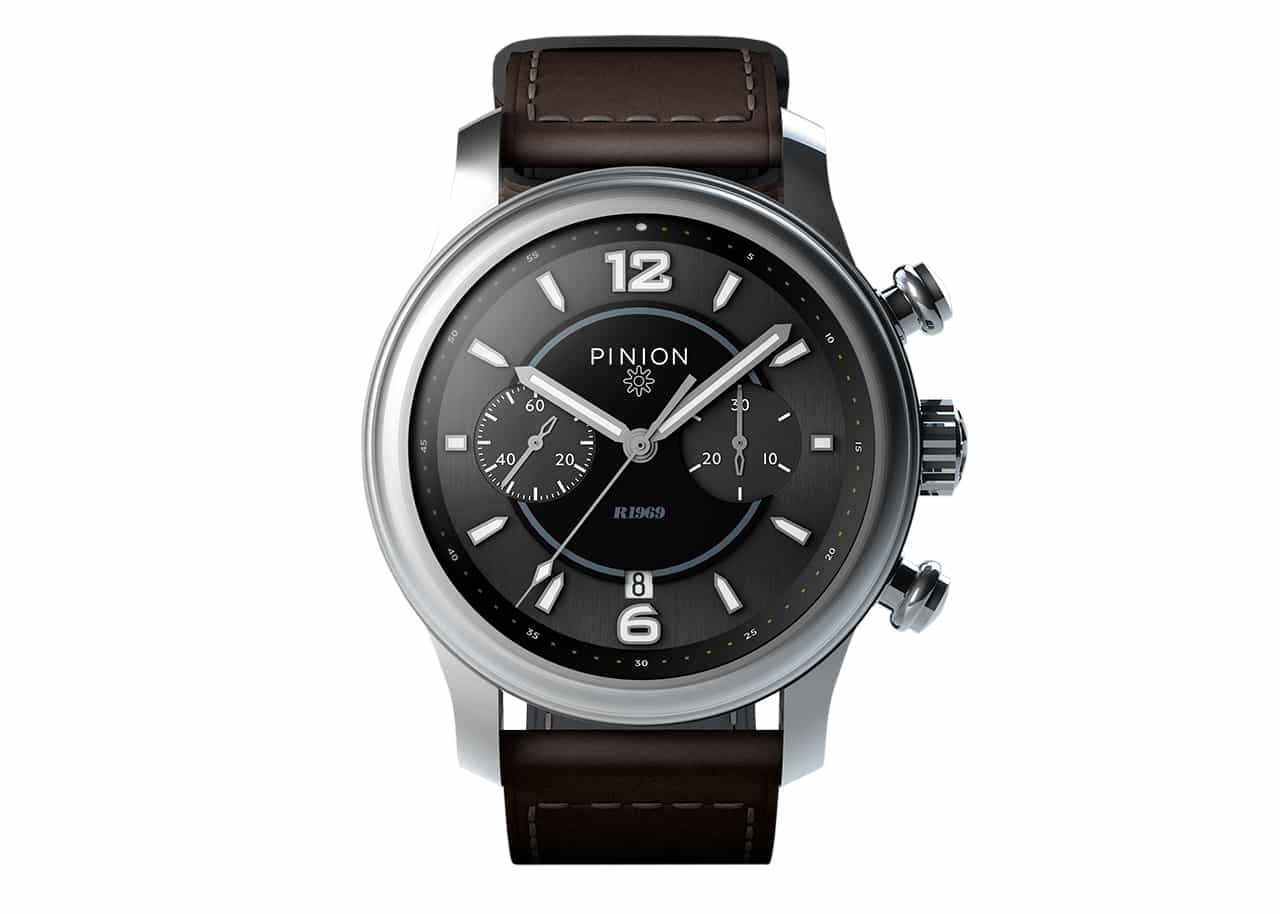 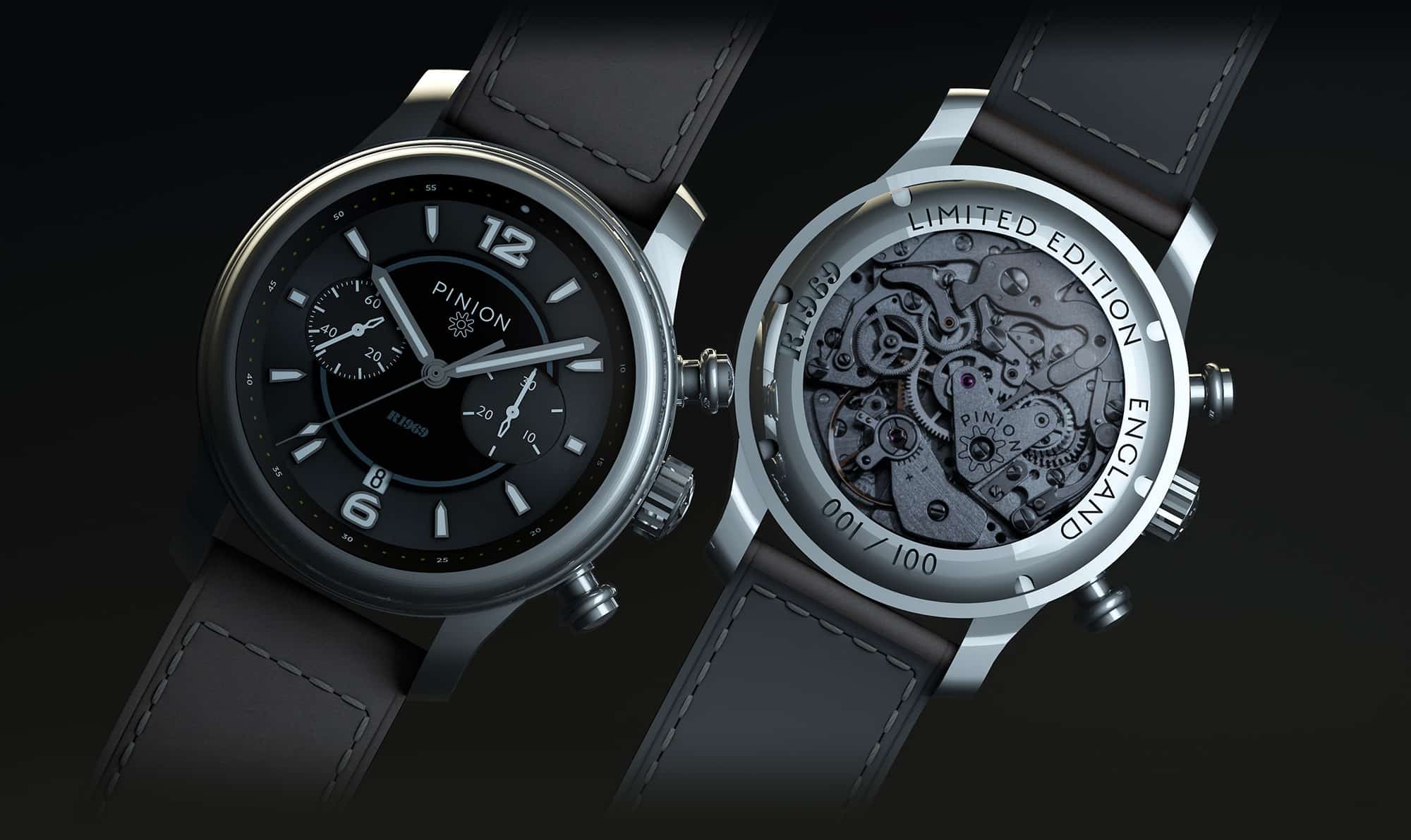 BORN IN SWITZERLAND. RAISED IN ENGLAND.

Revered for its ruggedness and reliability the handwound Valjoux 7734 movement was (and still is) one of the most dependable watch engines of its era. The movements used in the Pinion R1969 production were all made in 1969 but never assembled or put into a watch. That is, until now.

Piers Berry, Founder of Pinion watches, takes up the story.

“How do you bring something from 1969 up to date without changing anything? That was the challenge we set ourselves. We’re a modern English watch company that has secured a very rare stock of these 7734 movements still in their unused and unassembled (Ebauché) condition. So we started with what we had and built out from there.

With the dependability of this movement comes the practicality to wear this watch every day. So for the case we chose 316L stainless steel. It’s hard, strong, highly resistant to corrosion and has excellent hypoallergenic properties. As an added bonus it also polishes up to a stunning reflective finish.

A handwound chronograph invites and requires a high degree of human interaction. So the ‘contact points’ become important from an ergonomic and operational point of view. That’s why we paid special attention to designing and making our own bespoke pushers and crown to provide a positive action and wearer feedback.

Of course, in a chronograph watch the dial needs to be clear and simple to read. At Pinion we strive for simplicity and subtlety over complication and confusion; We engineered our own bespoke applied typeface for the main makers and so even though the dial is all black there are multiple levels and variations in the finish on its different sections to create contrasts that help with legibility and we’ve engineered this to a 100th of a millimetre of precision to ensure it’s accurate.

In terms of the aesthetics we wanted the Revival 1969 to reference 20th century vintage chronographs, but with a 21st century twist. Hence the ‘Superdome’ double bezel and convex anti-reflective crystal combination and a very wearable, modern yet modest 43mm size.

For all these reasons the Revival’s form follows its function, and that for me is what makes this a thoroughly modern watch – with heritage at its heart. You can see its modernity and ‘feel’ its history… the ticka-ticka sound from the handwound Valjoux movement is wonderfully satisfying and just a bit different from higher beat modern automatic movements”.

The R1969, like all Pinion watches, is assembled, finished and tested in England, this also includes the entire assembly and testing of the vintage 7734 movements from our Ebauché stock. Each watch will be engraved with its unique serial number and presented on a leather strap handmade in England by our artisan strapmakers.

As a finishing touch, The Revival 1969 will be presented in a large handcrafted solid wooden box finished in a beautiful high gloss piano black with polished chrome-plated hardware and soft blue inner lining.

The Revival 1969 will be officially launched to the public at renowned fine watch exhibition, SalonQP, London, November 6-8 2014.

Ten Facts about the Valjoux 7734

02. The name ‘Valjoux’ comes from the mountainous region in Switzerland called ‘Valley de Joux’ made famous for stopwatch and chronograph movements.

03. Watchmaking began in the Valley, when farmers would make clocks and watches on their farm tables in the bleak winters (When it was too cold to venture outside!).

04. The origins of the 7734 come from another chronograph manufacturer, Venus who made the ‘Venus 188’ but stopped operating in 1966. Valjoux took the designs for the 188 and adapted it into the Valjoux 7730.

05. The Valjoux 7734 is part of the series in the 7730 family. These come in different configurations, such as the 7736 with an extra hour counter.

06. Watch companies such as Breitling, Tudor and Heuer used the Valjoux 7734 during the 60s and 70s.

07. Production of the 7734 stopped after nine years in 1978 but was still continued to be used in mechanical watches into the 1980s.

09. Being a handwound movement, once fully wound the 7734 will retain power for 45 hours. As it’s not automatic, there’s no rotor, so the full movement can be viewed at all times through an exhibition (glass) caseback.

10. The Valjoux 7734 operates at a slightly slower VBH (Vibrations per hour) than modern automatic movements. This means the ‘ticka ticka’ sound is pleasing and reminiscent with vintage watches and past times. 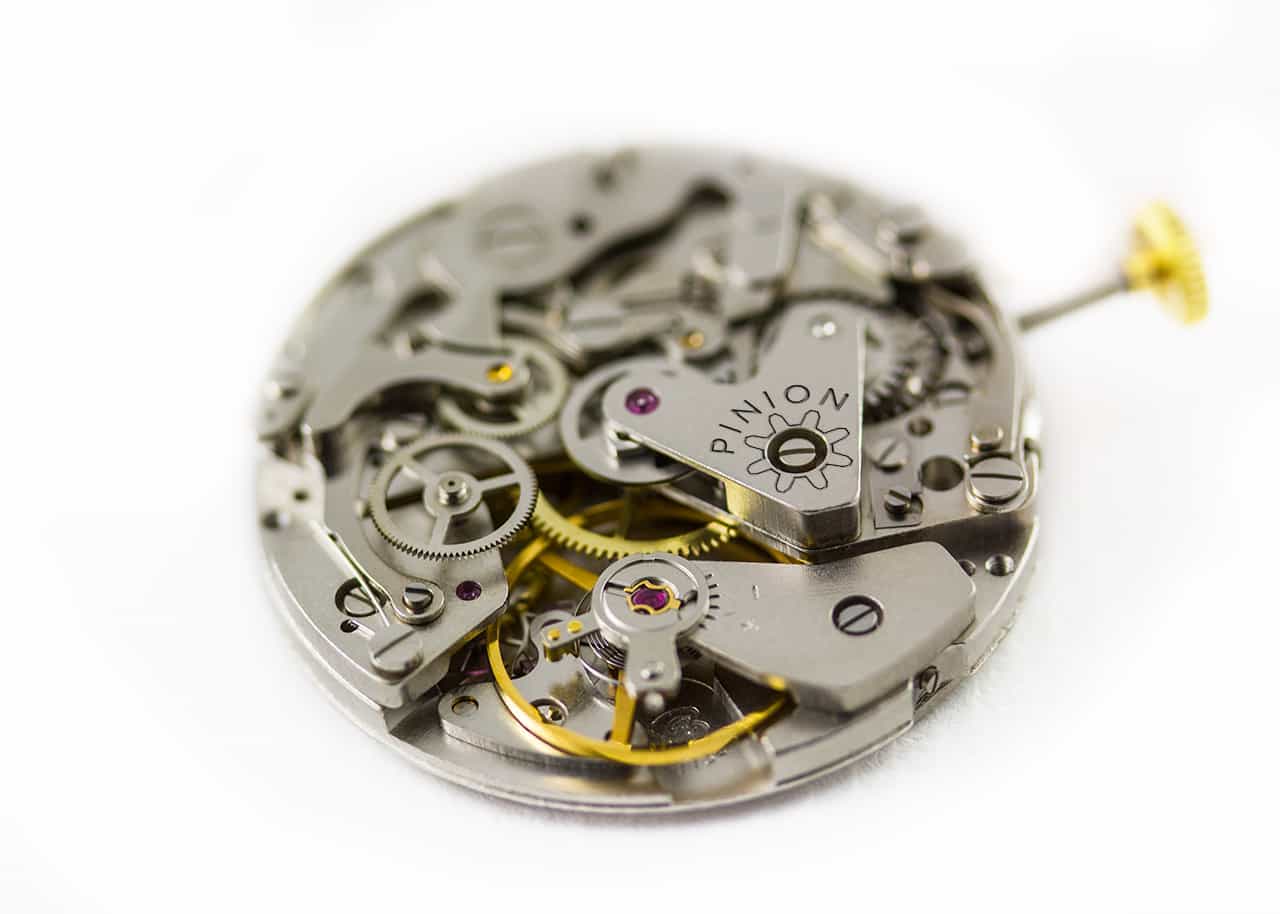 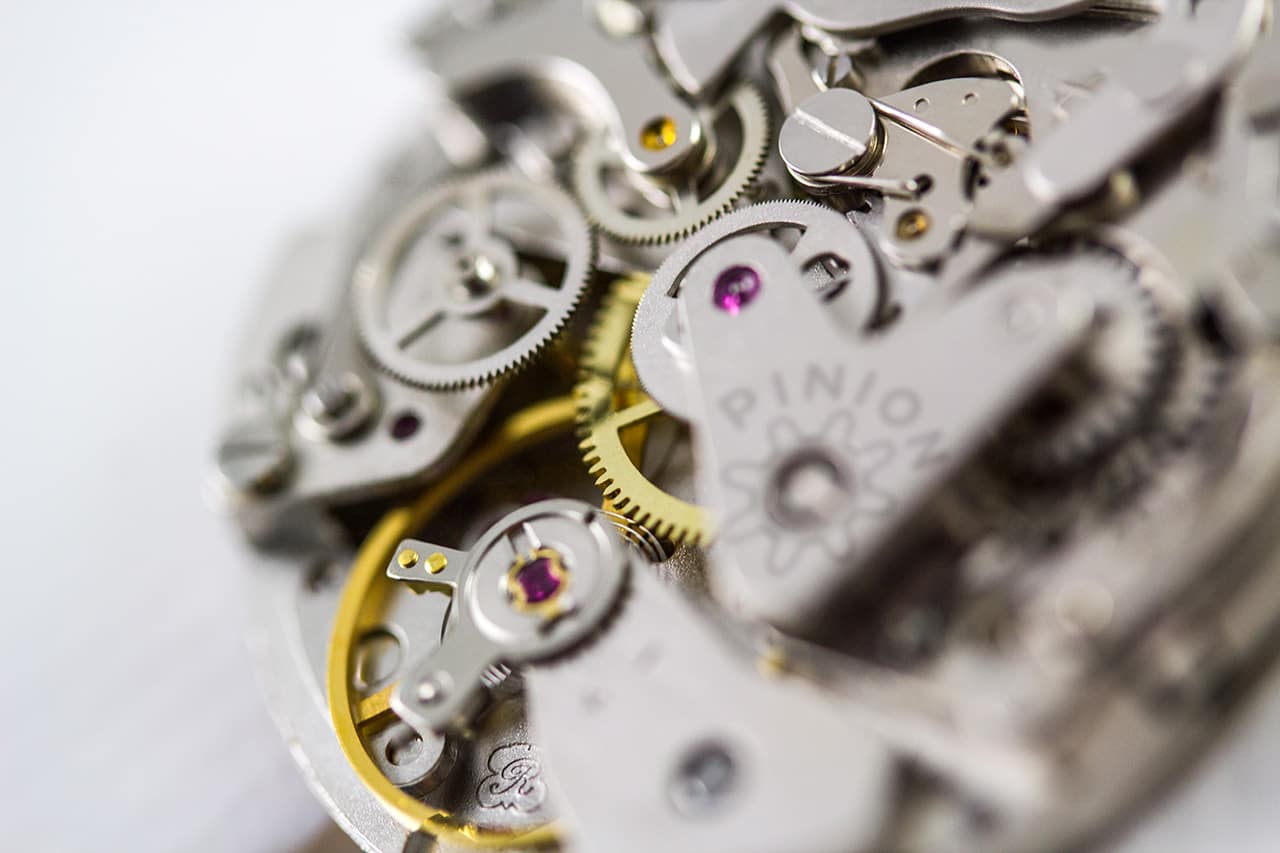 The Revival will be available to buy exclusively from pinionwatches.com
Reservations can be made from September 2014 onwards, with initial orders shipping late 2014 and early 2015. Anyone wishing to reserve one of the 100 watches should contact Pinion at: [email protected]

The following prices are correct at time of going to press. Euro and US Dollar prices may be subject to change based on exchange rates.

Every PINION watch is covered by an international two year warranty.

Pinion was founded in 2013 in South Oxfordshire, England. We produce fine watches based around Swiss movements, engineering and parts manufacture which are designed, finished and then assembled in the UK, and tested to the highest standards.

All of our watches are designed for daily and exceptional uses.

Our ethos is grounded in producing small quantities of unique and individual timepieces. Wherever possible we use skilled craftspeople based in the UK to help create our products. From the watch finishing and assembly to the making of our fine leather straps and accessories everything we do is done with the greatest of care and attention to detail.

The name ‘Pinion’ originates from the small but significant gear wheels that sit at the very heart of every mechanical timepiece and are often used to drive the more visible parts like the hands in a watch.