We have been following the English watch manufacture Pinion from the very start (in 2013), reviewed their Axis, R1969, Iron Heart colab and Pure (Bronze). Almost a year ago, we briefed you already on the Pinion Atom release (here). Learning about its price point made us enthusiastic, as we have been fans from the start and owning one of their watches for under €900 would be a steal.

But wait a minute! Where the other collections rely on movements like the Valjoux 7734 (R1969) and Unitas 6498, the Pinion Atom has been equipped with a Japanese movement. The Miyota caliber 9015 movement. A movement we often find in microbrands, and owned by the Citizen watch corp. As the movement represents a significant part of the costs of a watch, we now understand that the Pinion Atom can be offered for a lot less than the other Pinion watches. Hmm. We can find microbrand watches for 1/3rd of the price of this Pinion Atom with the same movement. So why  look any further?

Well, you and I both know that there’s more to a watch than ‘just’ the movement. There’s the dial, hands, case, crown, strap, buckle and the level of quality and finish in each of these individual components. Besides that, the Miyota 9015 is a bit rough but certainly not a bad movement. It is easy to service and tries to compete with the ETA2824. It is not an ETA2824 though, which is being reflected in the price. An ETA movement in the Pinion Atom would have made it a watch much more expensive, and the objective was to offer a watch for under €1000.

Is it a deal breaker? Well, to some it perhaps it, they might compare the 790GBP (~€895) to a microbrand that offers a watch with the same movement for €400 or perhaps even less. But you then have to compare everything, as written above: dial, hands, case, crown, strap, buckle etc.

So let’s park the discussion of the movement for a while and finally have a look at the Pinion Atom watch. 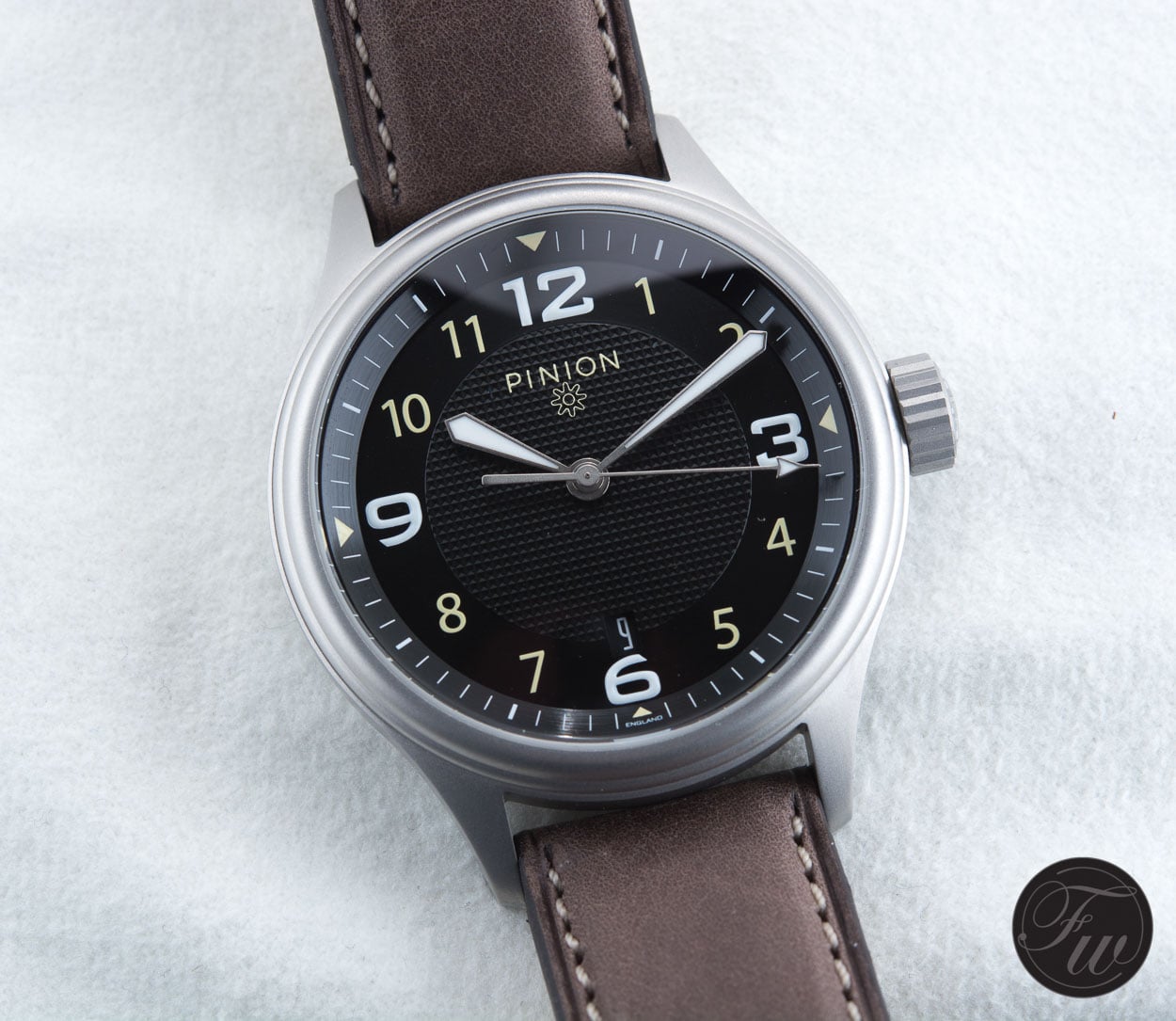 Pinion owner and founder Piers Berry has a design background and started to develop an interest in watches about a decade ago. Then, in 2013, he founded Pinion and his first watch was the Axis. A watch that we reviewed in the past and made quite an impression on us because of the high level of finish on the dial and hands for example. Something you need to witness yourself, and is hard to convince others about by just showing specifications. With the Pinion Atom, we see that that the style changed a bit of the watch. It has thinner lugs and looks a bit less rugged. When unpacking the Pinion Atom, somehow the first thing that comes to mind is the ‘Rolex Explorer’, or at least its style. No only because the Arabic numerals on 12, 3, 6 and 9 o’clock,  but also because of the sleek looking lugs. 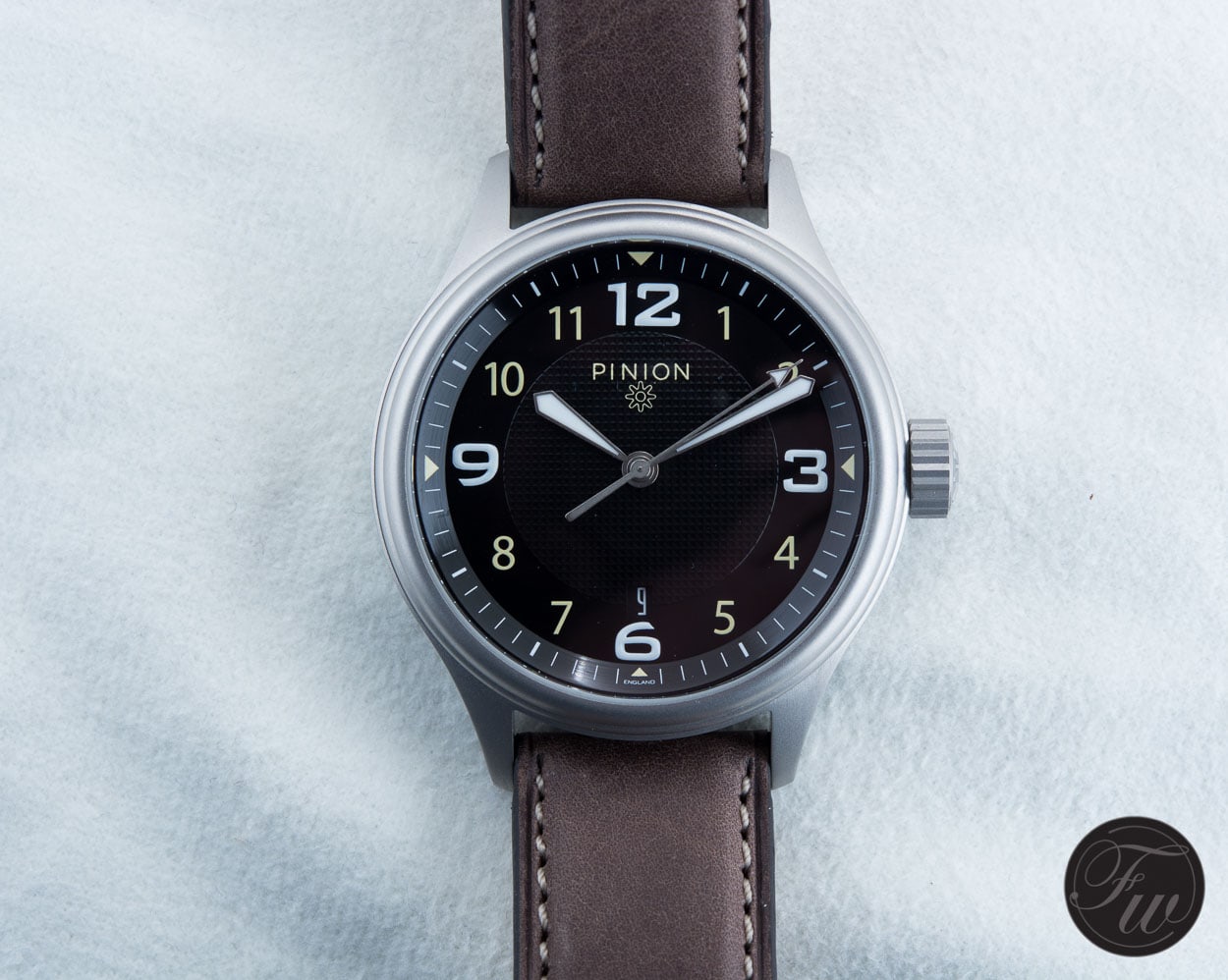 Anyhow, the style of the Pinion Atom is definitely one of a tool watch. Large Arabic numerals, brushed case (reminding me somehow of these brushed Sinn cases) and a brown leather calf strap with pin buckle. Although it has an automatic movement inside, Piers decided to go for quite large crown. The crown is signed with the Pinion logo. On the wrist, the 41mm case with bead-blast finish is very comfortable to handle, but always make sure if such a watch is fit for you as well. However, with 41mm little can go wrong for most men (and women).

The large white Arabic numerals on 12, 3, 6 and 9 o’clock are luminous (Super-LumiNova) and white. The other numerals have this yellow-ish color, inspired by the color of radium. Radium is the material that was used in the past to make indexes, numerals and hands glow. Did you know that if you send an original radium dial to Switzerland, chances are big you won’t get it back? Legislation doesn’t allow dials and parts with radium material to leave the country. Anyway, it looks nice on the Pinion Atom and gives it even more of a tool watch appearance. Besides ‘Pinion’ and the Pinion logo, there not much more information on the dial. No ‘Automatic’ or any mention of the 100M water resistance. Perfect. At 6 o’clock, just above the hour marker, there’s a date aperture. It is 50% on the center dial part with motif and 50% on the outer part of the dial, which is flat. The date disc is black and has white printing. From an aesthetic viewpoint, a good choice, but for older eyes I really dislike date discs in the same color as the dial. A convex sapphire crystal covers the dial and an anti-reflective coating has been applied on the inside. 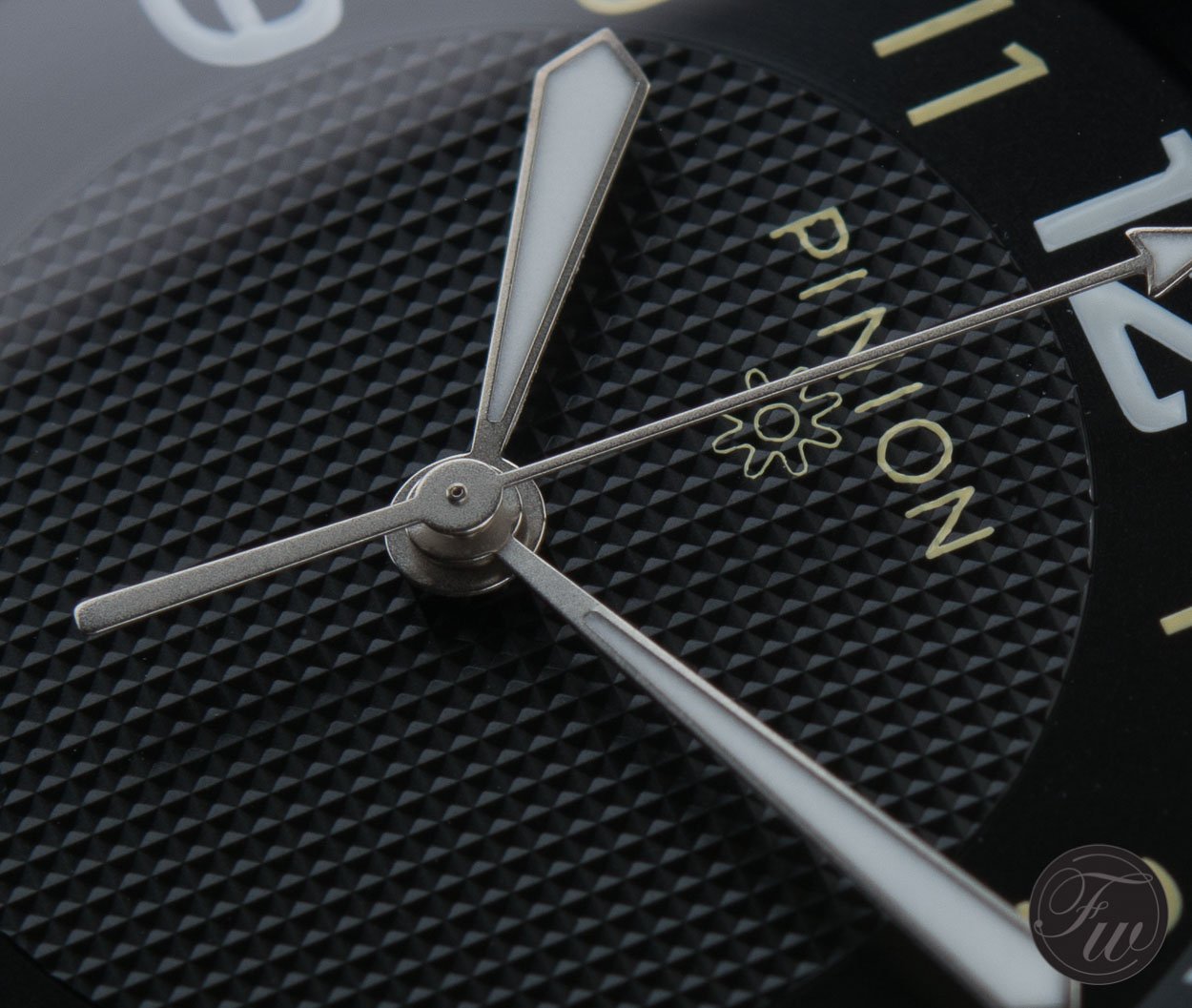 I love the texture on the dial, in the center part. It is really done nicely and add some flavor to the watch. The printing of the Pinion name and logo is done very nicely, even considered it is done on this texture dial. I had to get used to the shape of the hands, but they are sleek and match the style of the watch in my opinion. The other Pinion watches have different hands, all the same. I would personally not have mind to go with those instead, as it somehow also defines the Pinion ‘style’. Although it is difficult to compare without having an Axis or Pure watch to hold next to the Pinion Atom, I remember that I was amazed by the high level of quality of the hands on the Axis and Pure. The hands on the Pinion Atom are nice looking, but I have the feeling that these do not have the same level of finish as the other models. This could also be an issue of determining a lower price point, but still. However, to be really factual here I would need another Pinion model to do a proper comparison.

Pinion Atom On The Wrist

Sometimes I envy people who have just one watch. An everyday piece that will accompany you for years, decades perhaps. That could be a Rolex Submariner, GMT-Master II or an Omega Speedmaster or Seamaster for example, but what if you don’t want to (or cannot) spend this kind of money on a watch. For 790GBP, there’s the Pinion Atom that can fulfill this task for sure. In this price range there’s a lot you can buy. Both from established brands, like Seiko, Hamilton, Tissot and perhaps, an Oris (Aquis) in the pre-owned market. But what if you just like this Pinion Atom for what it is? 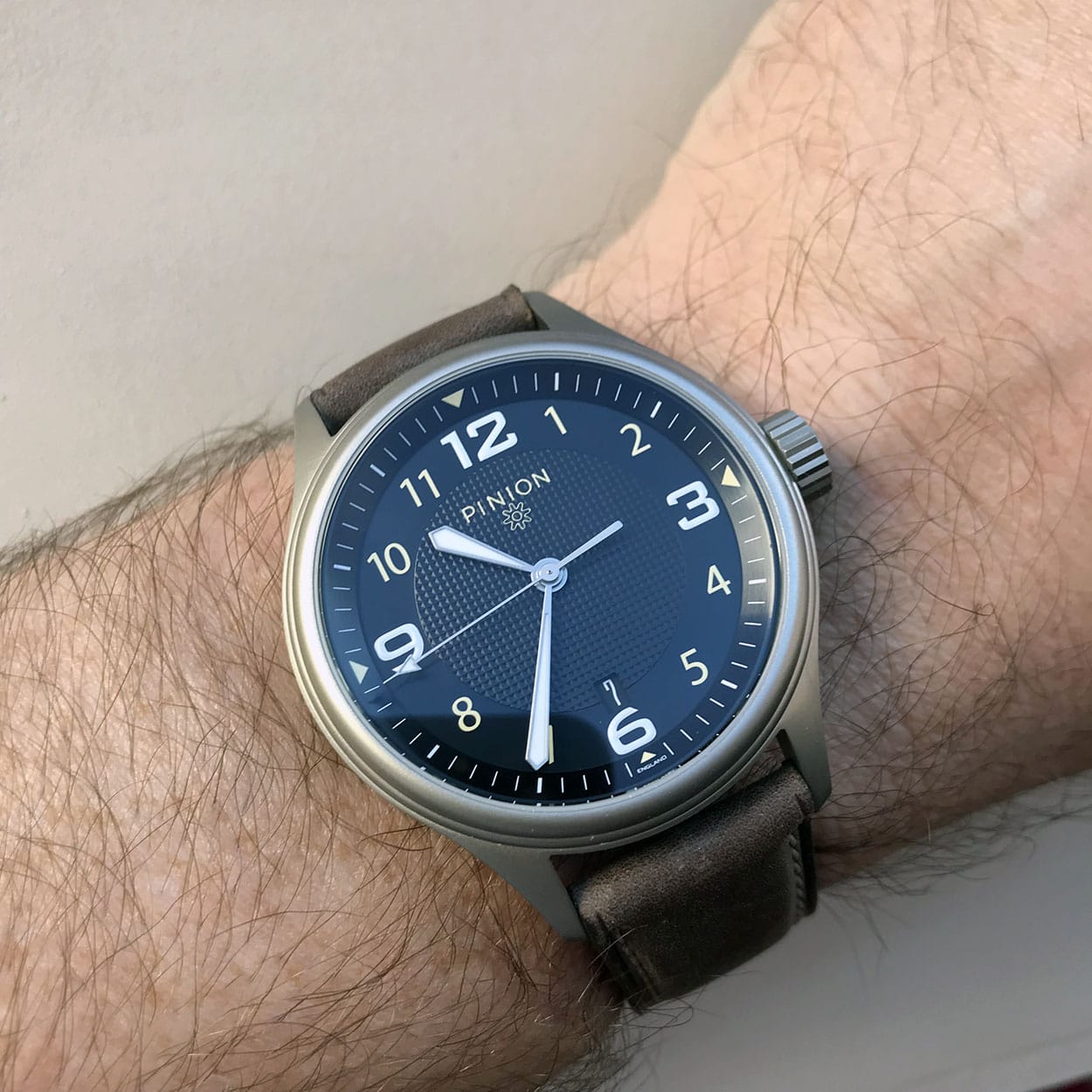 The comfortable strap is a perfect match to the watch and is made of supple calf leather. A pin buckle, signed Pinion, is there to keep it secured on the wrist. I prefer a pin buckle over a folding clasp myself, especially with this type of watch. As written above, the crown is quite large and easy to grasp. However, I always recommend you to take off the watch when setting the time or date. 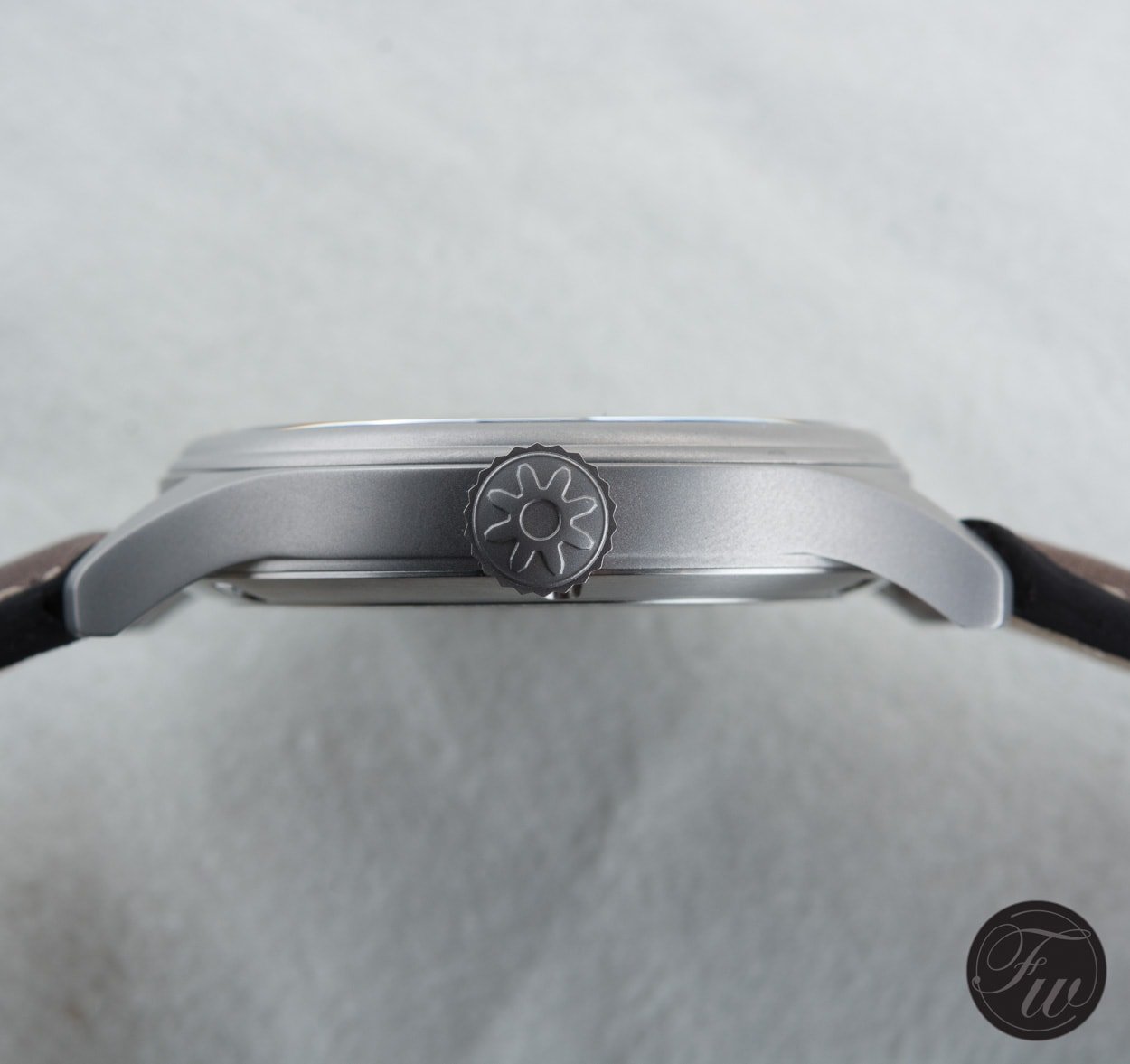 The caseback of the watch is also solid stainless steel (316L grade) and shows all the necessary information that is not on the dial. No duplicates here. The Pinion Atom has a water resistance of 100 meters, which means you could swim with it, if it weren’t for the calf leather strap. However, on a rubber or NATO strap (lug width is 20 mm) it should not be an issue. As you can see below, the caseback is a screw-down type. It covers the earlier discussed Miyota 9105 movement, that does its job perfectly. A 42 hour power reserve, ticking at 28,800vph, has 24 jewels and offers a date function, as shown on the images above. With this movement, Citizen offers an alternative to the more expensive ETA2824 and Sellita’s SW200. 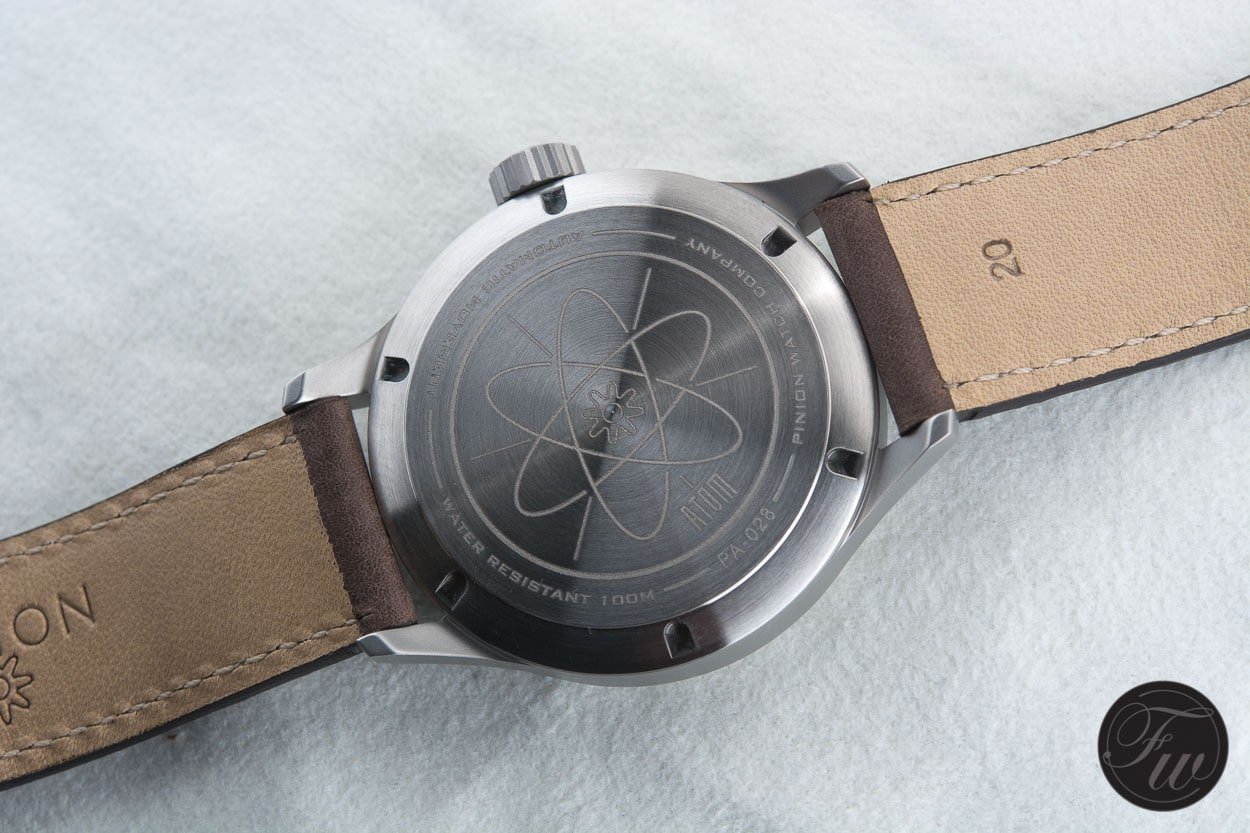 Verdict on the Pinion Atom

Piers Berry is doing a great job on Pinion watches, here at Fratello we have had a couple of his watches to try and test. However, the Pinion Atom is quite different from what we’ve seen before. Not only because of the Miyota movement, but also in terms of design and finishing. The price is accordingly, and for 790GBP it is the entry-level Pinion watch in their collection. For that amount of money, you get a watch that will serve you for many years for sure. The Miyota movement isn’t a difficult movement to service and the case and dial are very attractive. At least to me. Can you get more bang for the buck? Perhaps, if you are willing to dive into the world of microbrands. At least then you buy a watch with the same movement for an even more attractive price point. But as I wrote at the start, there’s more to it than just the movement and the low price has to come from somewhere. Pinion is not a microbrand and one of the questions that I always have in mind when looking at one, is how will this work in the future? When there’s something wrong with it, needs repair, needs service etc. Will the service machine of a microbrand work? Is the microbrand still around, after a couple of years? Pinion is a professional watch company, it is no side project from someone. That is also reflected in the price, of course. 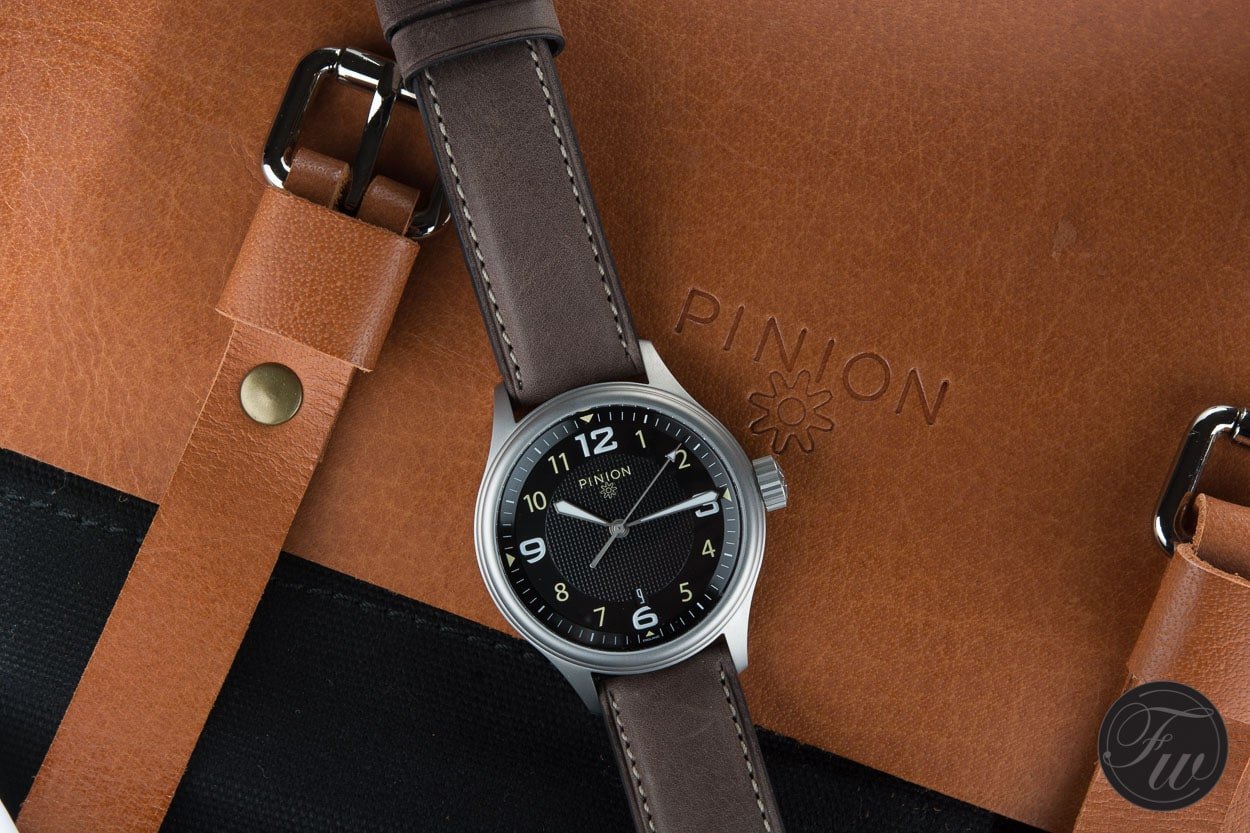 A comparison between a Sinn 104 and the Pinion Atom would be more fair in my opinion. Where the Sinn 104 is almost 1100 Euro and powered by a Sellita SW-220-1. This is about 200 Euro more than the Pinion Atom. It is up to you, whether you feel it is worth it of having a Swiss movement instead of a Japanese movement. All this, of course, is regardless whether you prefer the style of the Pinion Atom over the Sinn 104. Although I am a fan of Sinn watches, I lean a bit more towards the style and design of the Atom.

In the end, buy what you like (and not what others want you to like). The Pinion Atom has been a great companion on my wrist and I really like it for what it is: a no-nonsense tool watch in an affordable segment. I have a number of watches to choose from, in various price ranges, but I found myself wearing the Pinion Atom quite often as it is a nice and cool looking watch, comfortable on the wrist and easy to read. For me, the only thing that wouldn’t have been necessary is the date.

The Pinion Atom comes with a leather strap (you can choose between black and brown) and a cool watch roll as packaging. It also comes with a two-year warranty.