Pinion is one of those names that instantly spring to mind when industry folks talk about British watch companies. The reason? The build quality and wrist experience. I have always somewhat missed out on the latter due to the sizing. Today, though, my ill fate is about to change. Pinion is launching its smallest watch to date, the Neutron model, sized at 38mm in three color schemes.

Pinion has remained in my peripheral since its glorious debut back in 2013. The independent brand has also earned serious fans among the Fratello ring leaders. Little did I know, Pinion watches were even adorning some famous wrists, according to the company. They were featured in several leading films and TV productions, such as Fast and Furious 9 (John Cena), Doctor Who (Chris Noth), and Guy Ritchie’s The Gentlemen (Hugh Grant). It really is a case of “if you know, you know”. 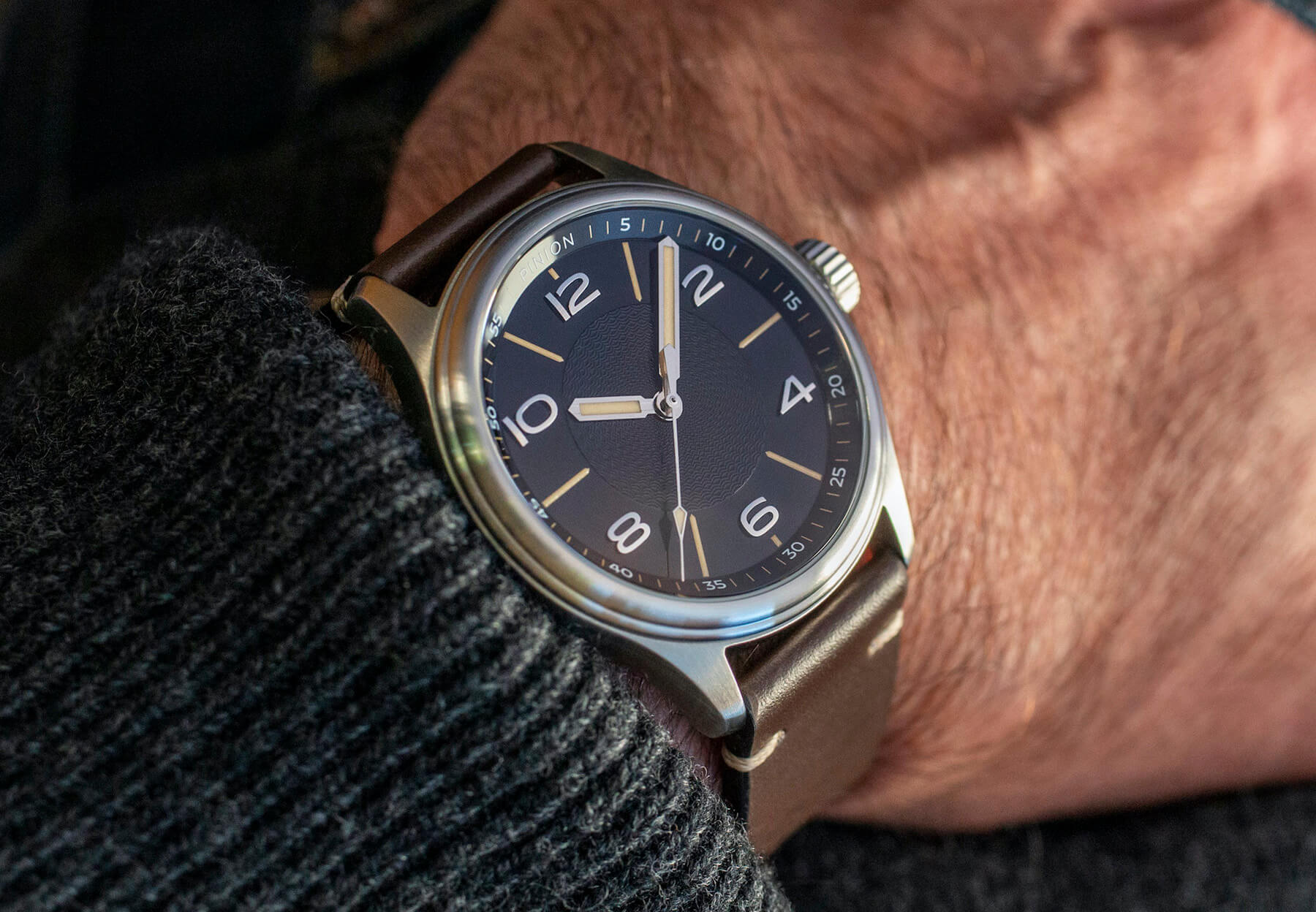 Strong in the style game, Pinion has always received praise for its design and detail. That is little surprise considering founder Piers Berry’s background in digital design. After nine years of evolution, the Neutron is undoubtedly demonstrating a rising level of maturity in the Pinion design language. It may be a direct descendent of the Atom watches (you can reference RJ’s on-the-wrist review here), but the Neutron is ever more refined in a quiet, confident way. 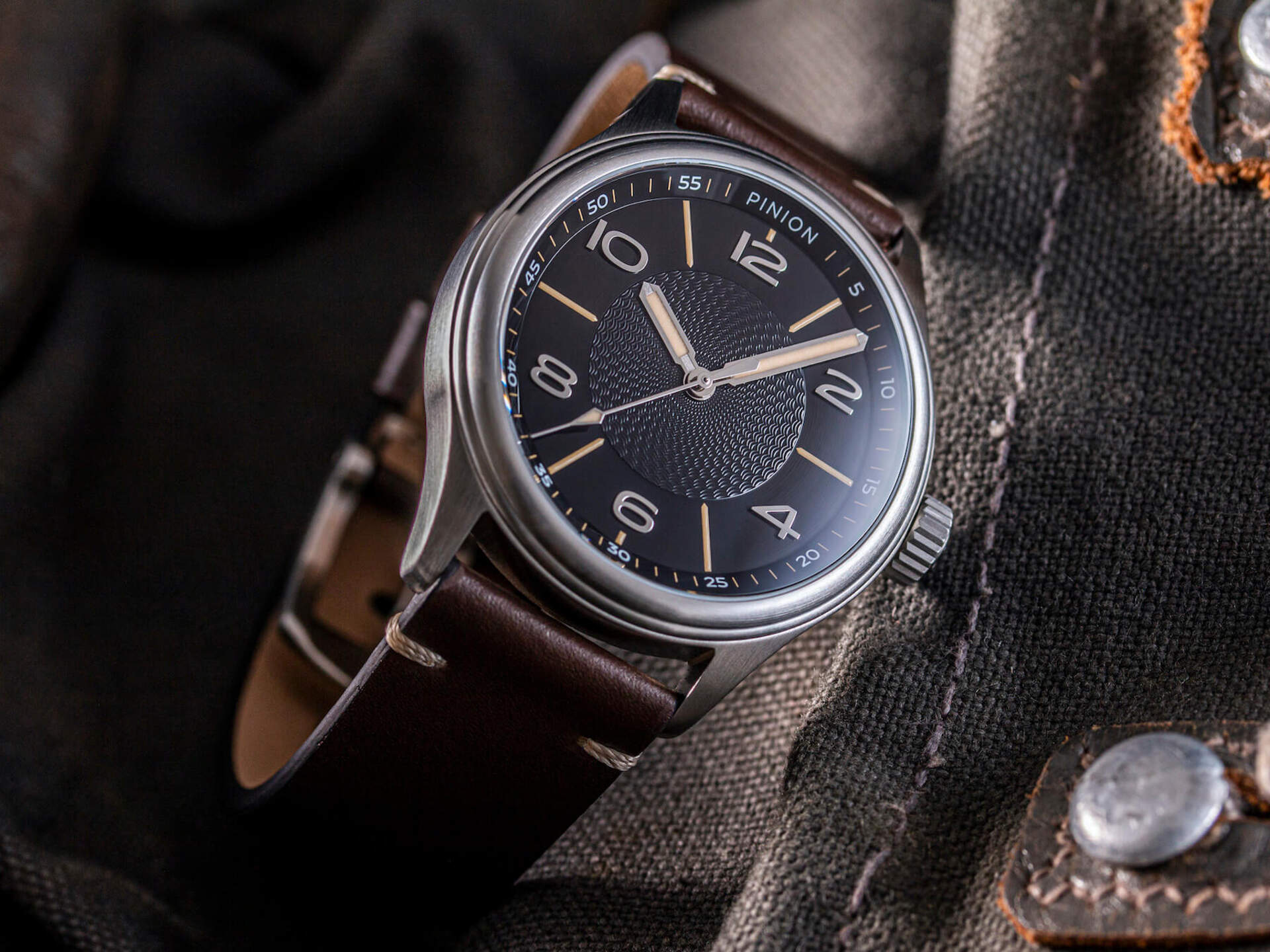 Sized at 38mm in diameter and 11mm in height, the Neutron comes in a stainless steel case with a brushed finish. It delivers a wholesome package in Pinion’s most compact case so far. The new case has a smaller dial window to allow for better proportions with the bezel. The visual balance is further enhanced by the design of the dial with a circular-brushed outer sector and a central guilloché pattern. An electroplating process gives the dial its color, with a choice of black, blue, or “Dusty Pink”. The dial is then topped with a domed sapphire crystal with an anti-reflective coating on the underside. 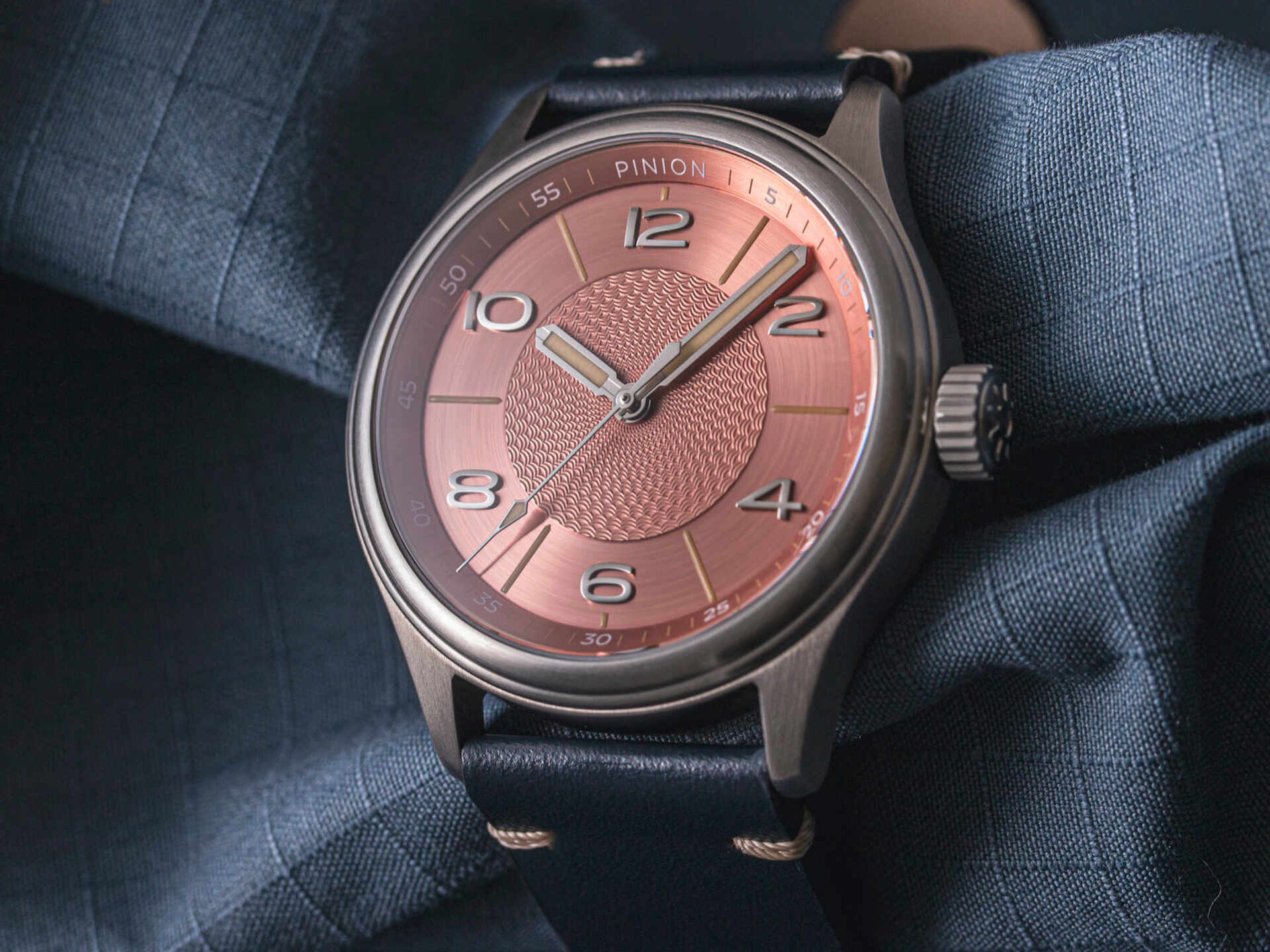 Pinion has deliberately left its logo off the dial, moving its wordmark to the rehaut in order to let the beauty of the guilloché take center stage. This pure elegance calls for a clean, new typographic style for the numerals and slender lines for the indexes. Raised numerals for the “even hours” are machined in brass, polished, then electroplated with nickel silver before being hand-applied to the dial. Batons indices at the “odd hours” are printed in a contrasting radium hue and filled with Super-LumiNova. The hands are made of diamond-cut brass and given a polished finish, then nickel-plated and treated with Super-LumiNova. The etched groove running down the center of the hour and minute hands gives a nice bit of contrast with its matte finish. 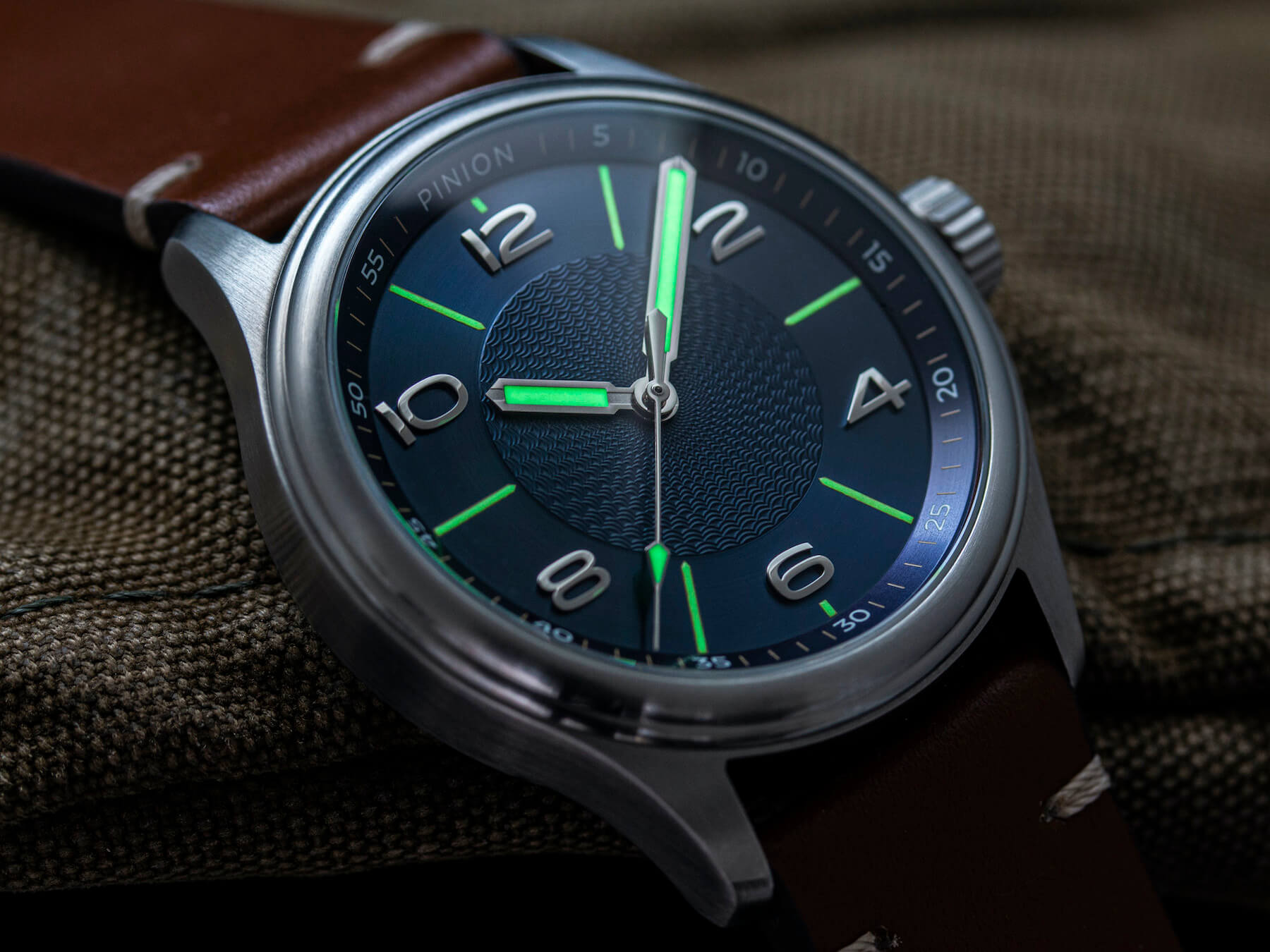 At the heart of the Neutron is the perfectly respectable ETA 2824-2 automatic movement. Pinion has been using this caliber since 2013 and supporting it with parts and its own servicing. Each movement is regulated by Pinion’s watchmaking team in England over five days in five positions to a minimum of ±5 seconds variation per day. On the rear side of the Neutron, you’ll find a screw-down case back with a circular-brushed finish and Pinion engravings. The brand performs all engraving in-house and allows personalized engraving options at no extra charge. 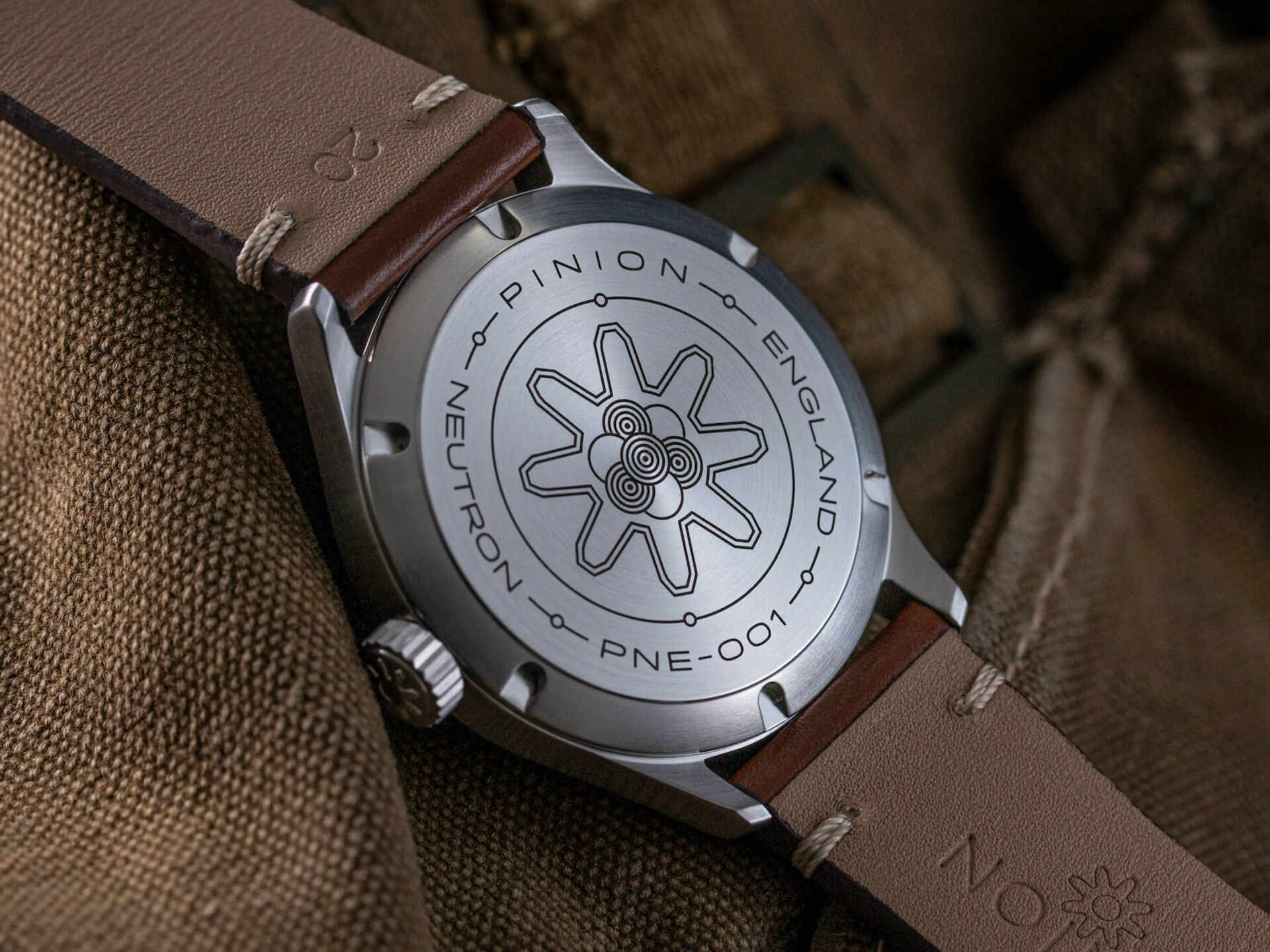 As with all Pinion watches, the Neutron is designed and built in England with components manufactured in small batches. Pinion works with several small independent specialist makers in Switzerland and Germany to produce the watch parts. The brand then conducts assembly, regulation, and testing in England, along with the final engraving of the case back. The Neutron has four color options for its 20mm leather strap and five options for the included nylon one-piece strap. Each watch also comes with a two-year warranty as standard.

Of course, we are eager to see the new Neutron model in the flesh. Based on our previous experiences, there is a consistency in Pinion’s high level of detail and quality given to the dial, hands, and casing. And with such a friendly price tag, the Pinion Neutron may even make a case against MING’s guilloché watch. The 38mm Pinion Neutron in black, blue, and Dusky Pink is available exclusively from Pinion. The three color variants retail for £1,200 including UK VAT, or £1,000 excluding VAT for delivery outside the UK.

For more information or to order directly, visit the Pinion website. As always, let us know your thoughts in the comments below!