Today, we’ll take a look at the Prometheus Zenobia, the latest watch made for the ever-growing Divers Watches Facebook Group.

We’ve now reviewed roughly a handful of limited edition dive watches made by various micro brands in collaboration with the Divers Watches Facebook Group (DWFG).  The group, headed largely by Andreas Gregoriades of Cyprus, continues to expand its membership as the largest watch group on the powerful social media network.  In fact, at time of writing, there are nearly 48,000 members!  With most of the members sharing a real enthusiasm for ocean-able timepieces, it’s enabled Andreas to work with smaller brands in order to create customized watches that members should enjoy.  The pieces, no matter the manufacturer, all contain the DWFG logo somewhere on the dial, and most have sold out quickly.  So let’s look at the newest DWFG piece and decide whether it will please members of the group: the Prometheus Zenobia. 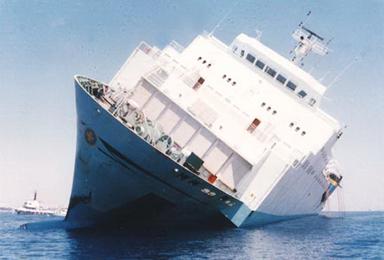 Info: Prometheus and the MS Zenobia

Before diving into the details of the Prometheus Zenobia, let’s clarify a couple things.  First, who is Prometheus and second, what’s a “Zenobia”.  If you’re confused, don’t worry as I had to look up both as well!  Prometheus is a micro brand out of Portugal (similar to Borealis – another collaborator with the DWFG) that was founded in 2008.  They specialize in dive watches that often bring in design traits from 60’s and 70’s models, they offer watches with over 300M of water resistance, and aim to do so at an affordable price.  While the watches contain parts from all over, it’s no surprise that China is a big supporter in order to help keep costs in line.  Regarding Zenobia, this is an entirely different subject.  The MS Zenobia was a large Swedish-built “roll on roll off” (short for – cars and trucks could be driven on and off the ferry) ferry that was launched in May, 1980 in the Mediterranean. 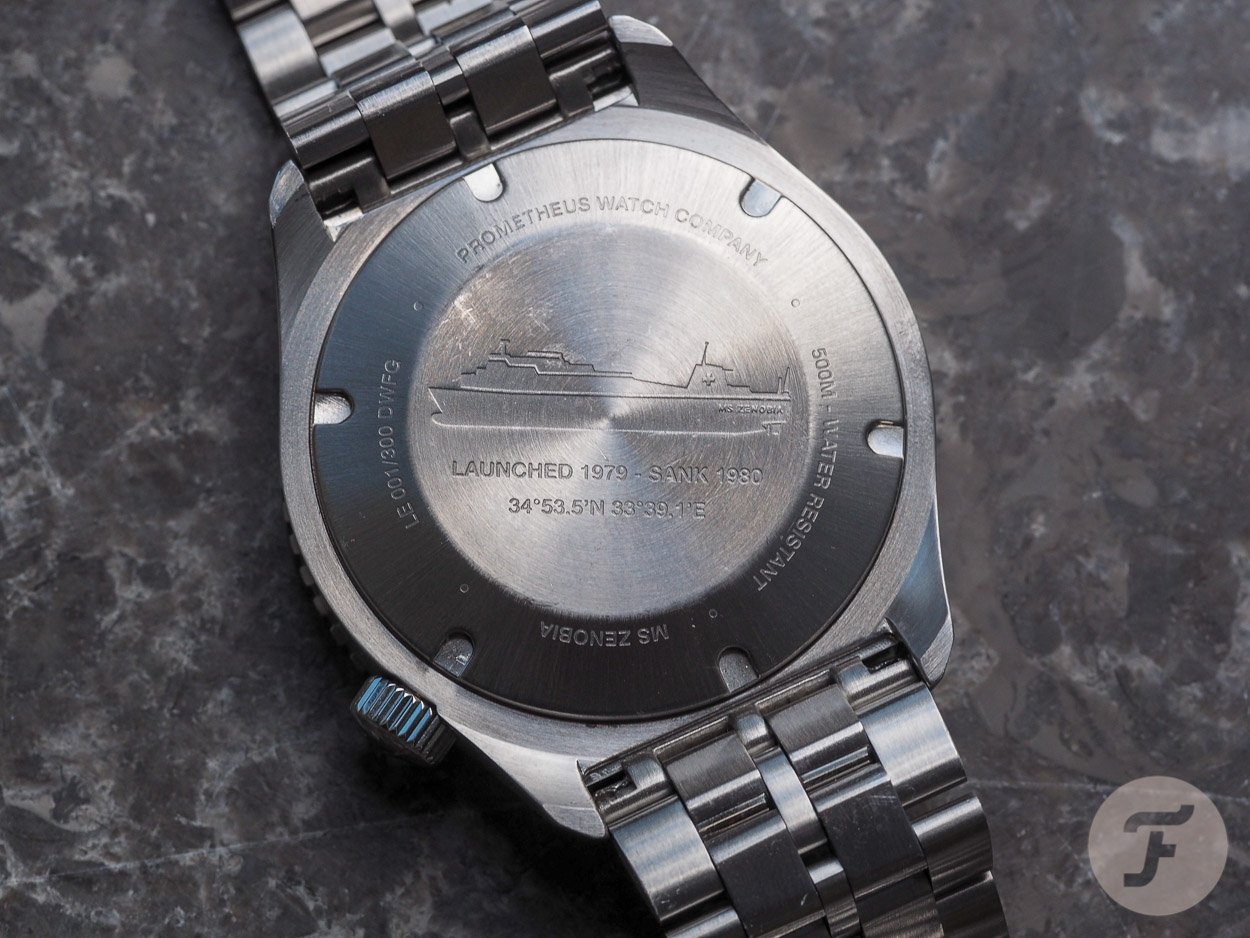 Notoriously, it sank barely a month later off the coast of Cyprus (Larnaca to be exact) due to software errors that repeatedly flooded its ballast tanks (oops!).  On the positive front, no one was seemingly hurt, but a reported 200M GBP of cargo was lost!  The MS Zenobia sank 1,500 meters from the coast in a shallow 42 meters of water.  And now we come back around to the dive watch at hand because this wreck is consistently voted as one of the top 10 dive sites in the world due to its accessibility, varying levels of difficulty, and large amount of sea life that makes its home on the sunken vessel.  You can see a simple side view of the ship on the case back along with information about its sinking. 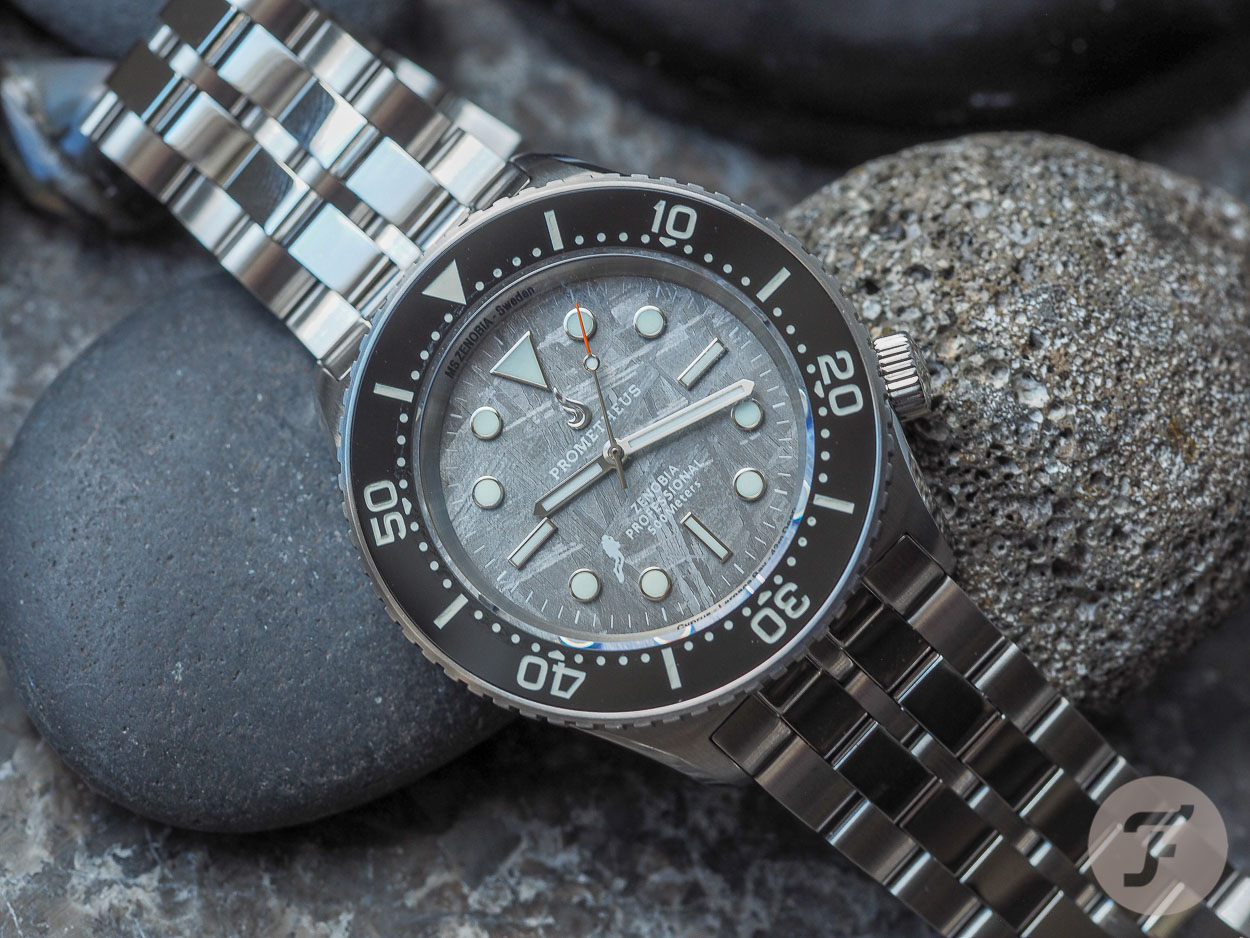 The Prometheus Zenobia is a 500M dive watch in stainless steel that will be available in a run of 300 total watches.  With 6(!!) different dial colors, 5 of which can be specified with or without date function, they’ll be made to order and, therefore, the allocation is TBD.  In order to cover the bases for both the flag colors of Cyprus and Sweden, we have dial choices of black, green, orange, blue and yellow.  These, as mentioned, can be ordered with or without date.  All watches will use the workhorse automatic ETA 2824-2.  We’re also offered a version (no date only) with a meteorite dial and because I’ve not had much experience with the material, I opted to try one of these. 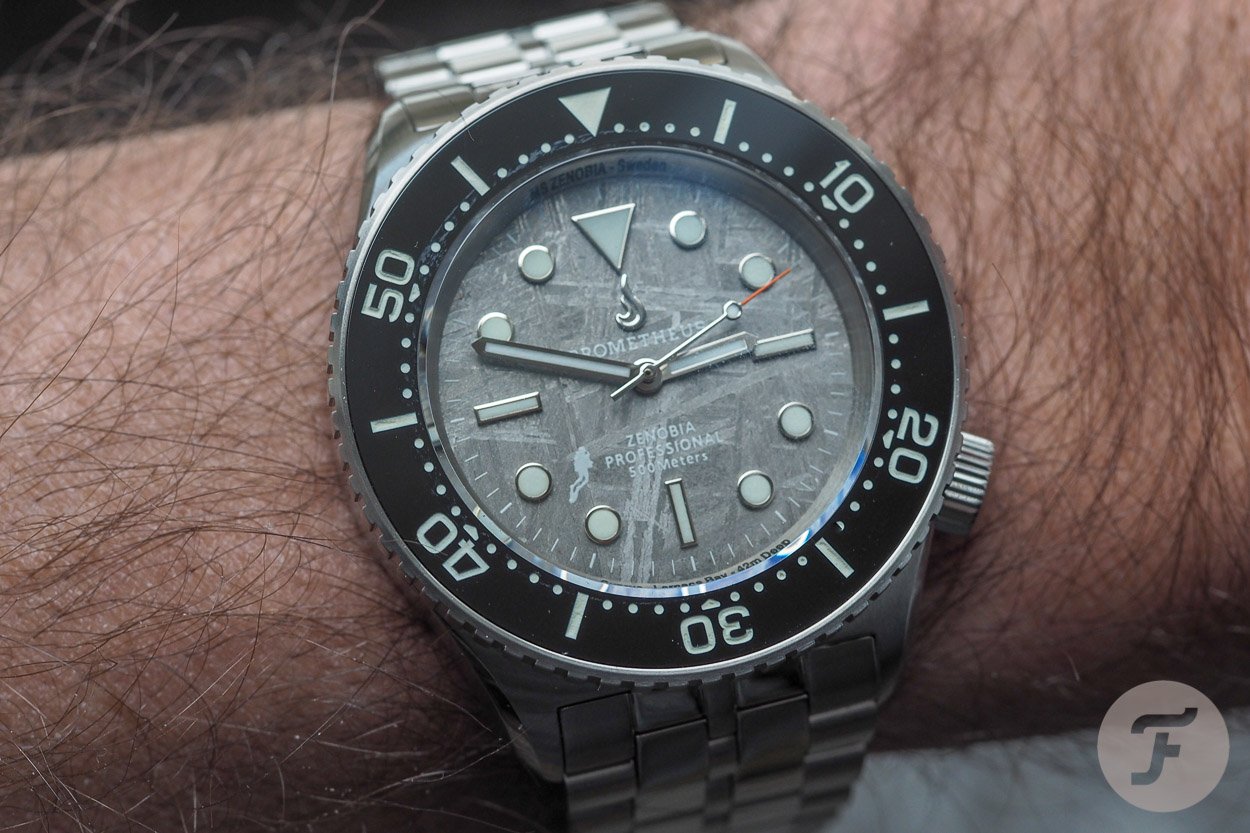 At 43mm x 49mm, the Prometheus Zenobia is a relatively squat dive watch and that makes it quite wearable for my slim wrists.  Compared to some of the other watches that the DWFG has released, this is amongst the most comfortable. 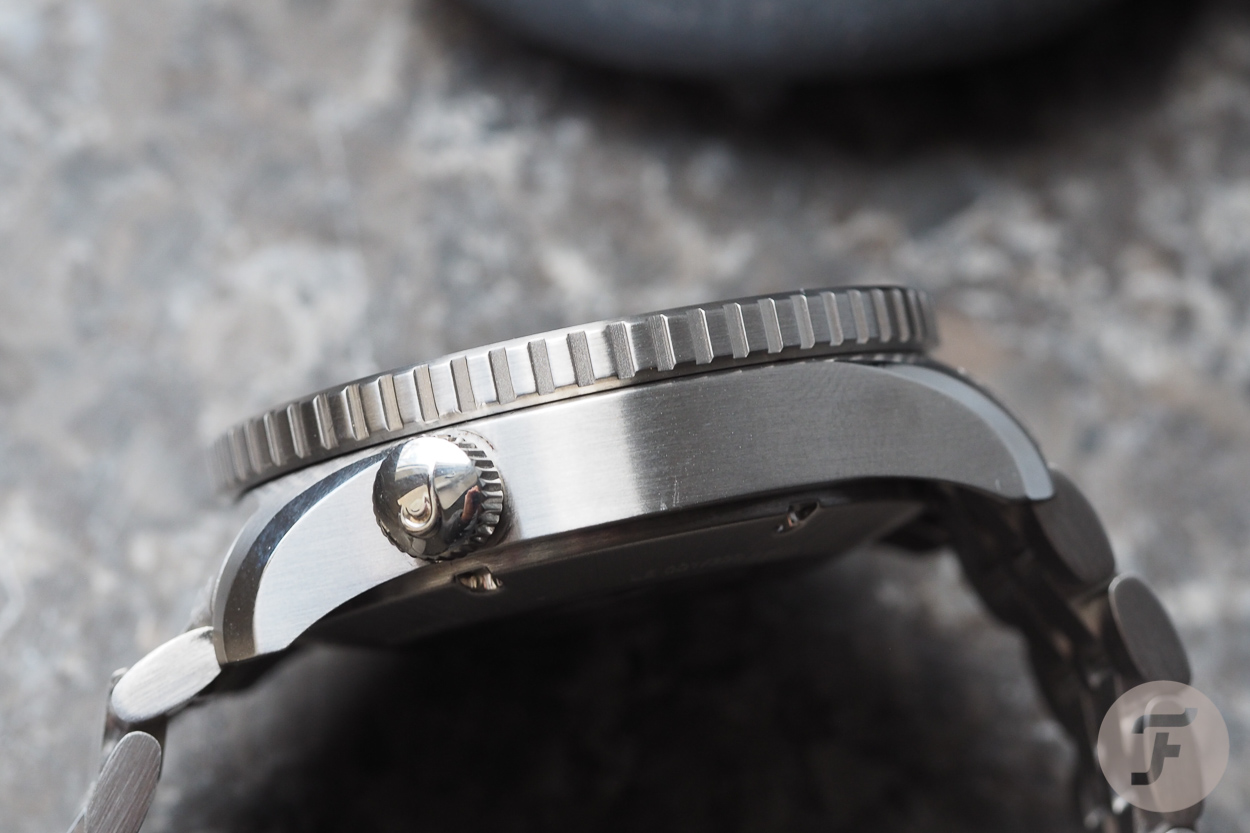 At first glance, with its 4:00 screw down crown and flat ceramic lumed 120 click uni-directional bezel, it seems to share a lot of its design language with the green Seiko SLA019 that was released last year.  That’s not a bad thing and I’d even say that this watch, with a total thickness of 13.6mm, is a bit easier to wear.  And while I did not photograph the Zenobia in low light, it blazes with its light blue Superluminova BGW9.  That lume is found in ample quantities on the dial, hands, and bezel. 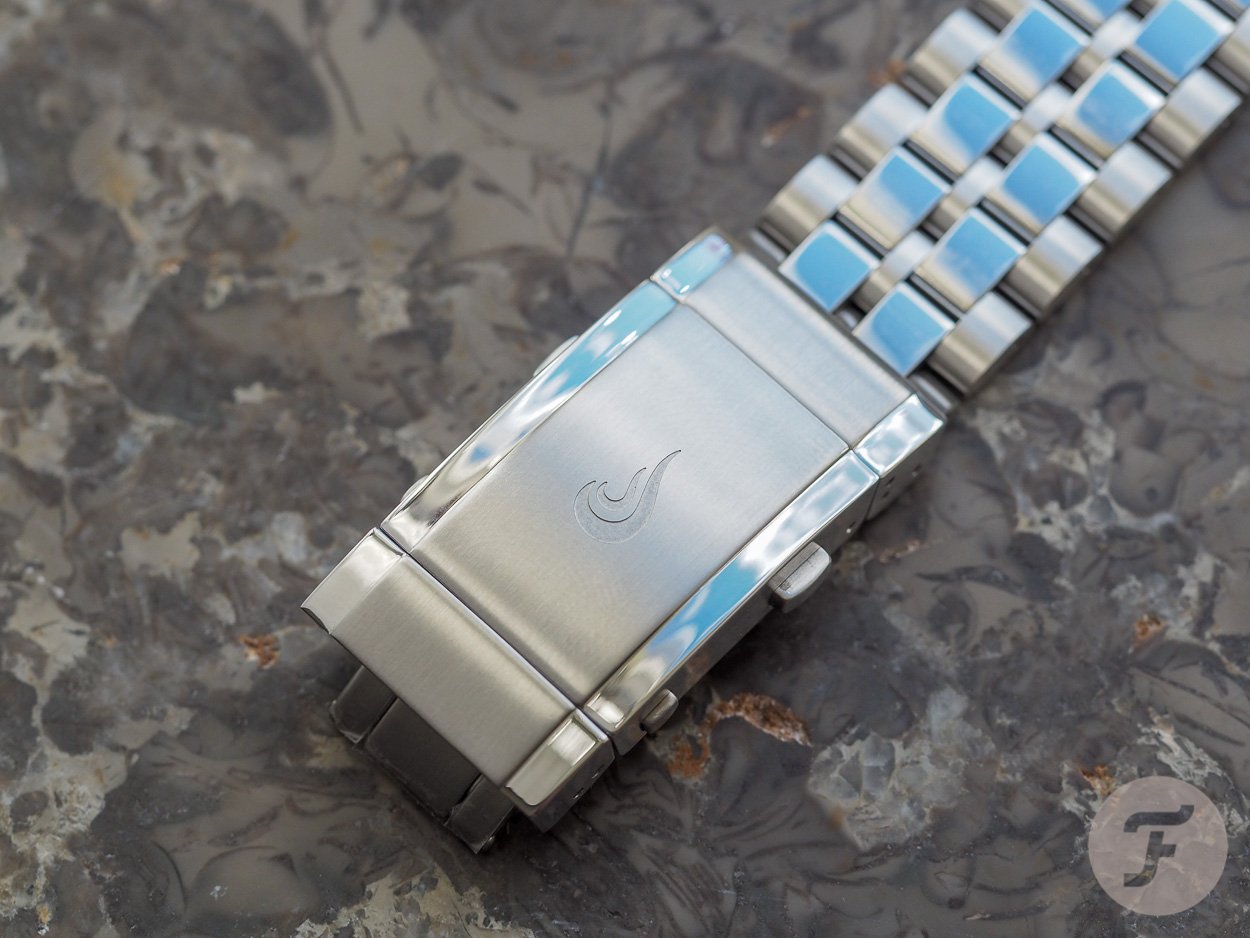 A Different Bracelet for a Micro Brand Diver

Now, I definitely have a prototype version of the Prometheus Zenobia (it was explained that the thickness of the meteorite dial will necessitate some adjustment to the crown position and that the test watch has an STP movement instead of an ETA), but it was still an enjoyable watch to wear over a couple of days.  The slender lugs and one of the better integrations of a bracelet onto a case by a micro brand only served to enhance the experience.  What I mean about that last point relates to the end links.  I’ve tested plenty of micro and macro branded watches where these appear as incredibly cheap, but these look quite good.  With the bracelet, I have a few reservations.  First, the 22mm bracelet does not taper at all as it heads toward the clasp and while that doesn’t affect its performance, it looks a bit bulky and can feel that way in the heat.  Second, I admire the design of the links and the feel while on the arm, but the bracelet did actually “kink” sometimes when adjacent links were bent backwards by 180 degrees.  And finally, I really find no fault with the clasp because it’s functionally great with its push button opening and push button wet suit adjustment.  Even the logo and alternating brushed/polished surfaces look great.  It’s simply that this clasp has become the “go to” for most micro brand dive watch brands, so a slimmer, different take would be nice.  But again, everything regarding the bracelet and clasp worked well and the surfaces were nicely finished. 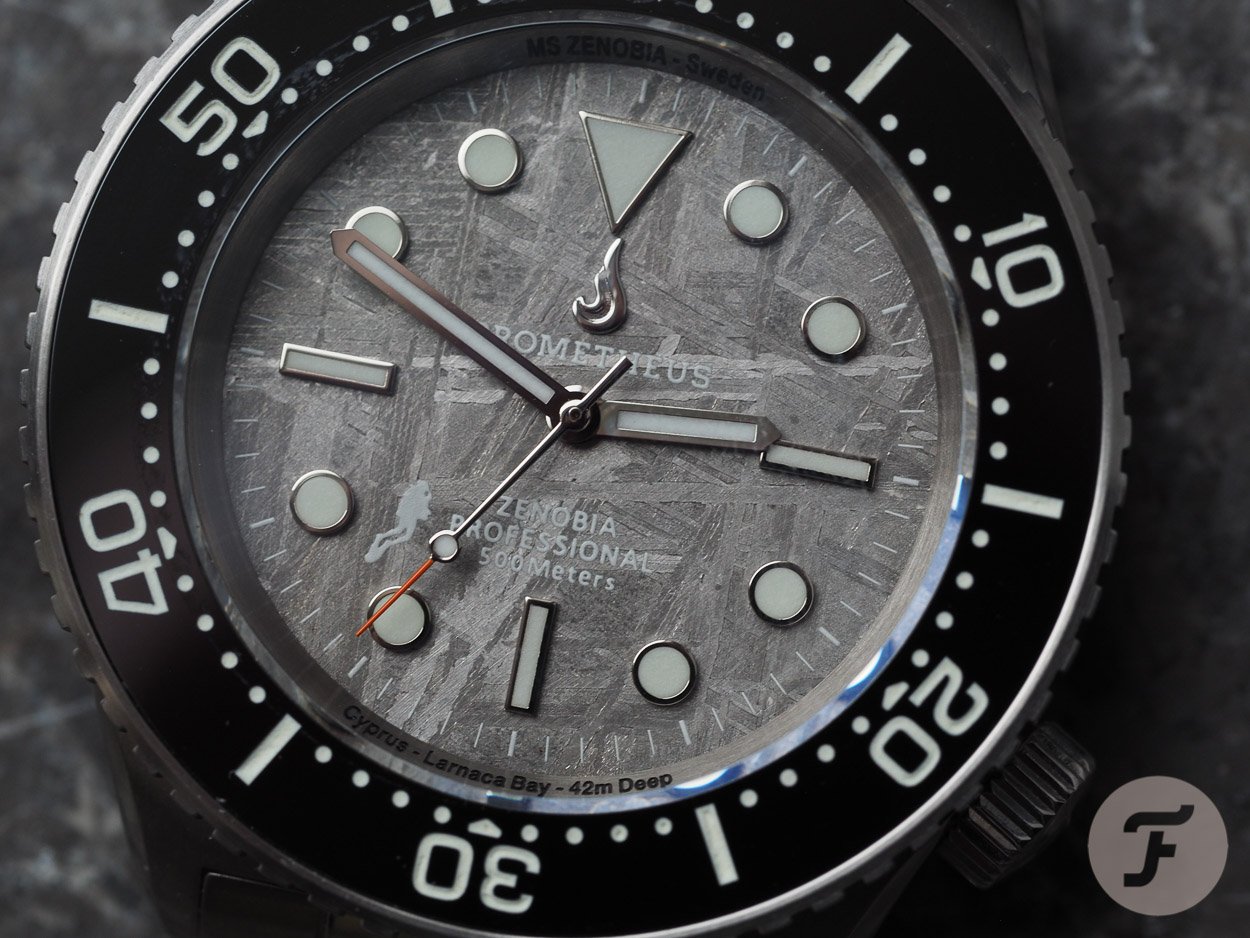 And so now we come to the dial of the Prometheus Zenobia and to be frank, this is just as much an opinion piece on meteorite as a medium as it is a discussion about the watch’s dial design.  I’ve long admired the look of meteorite on watch dials such as those on various Speedmasters, but they’re expensive and I found them to be a bit too ornate.  Still, it’s hard not to admire the idea of having something on your wrist that originated in outer space, later blew through the earth’s atmosphere, only to ram into its surface. 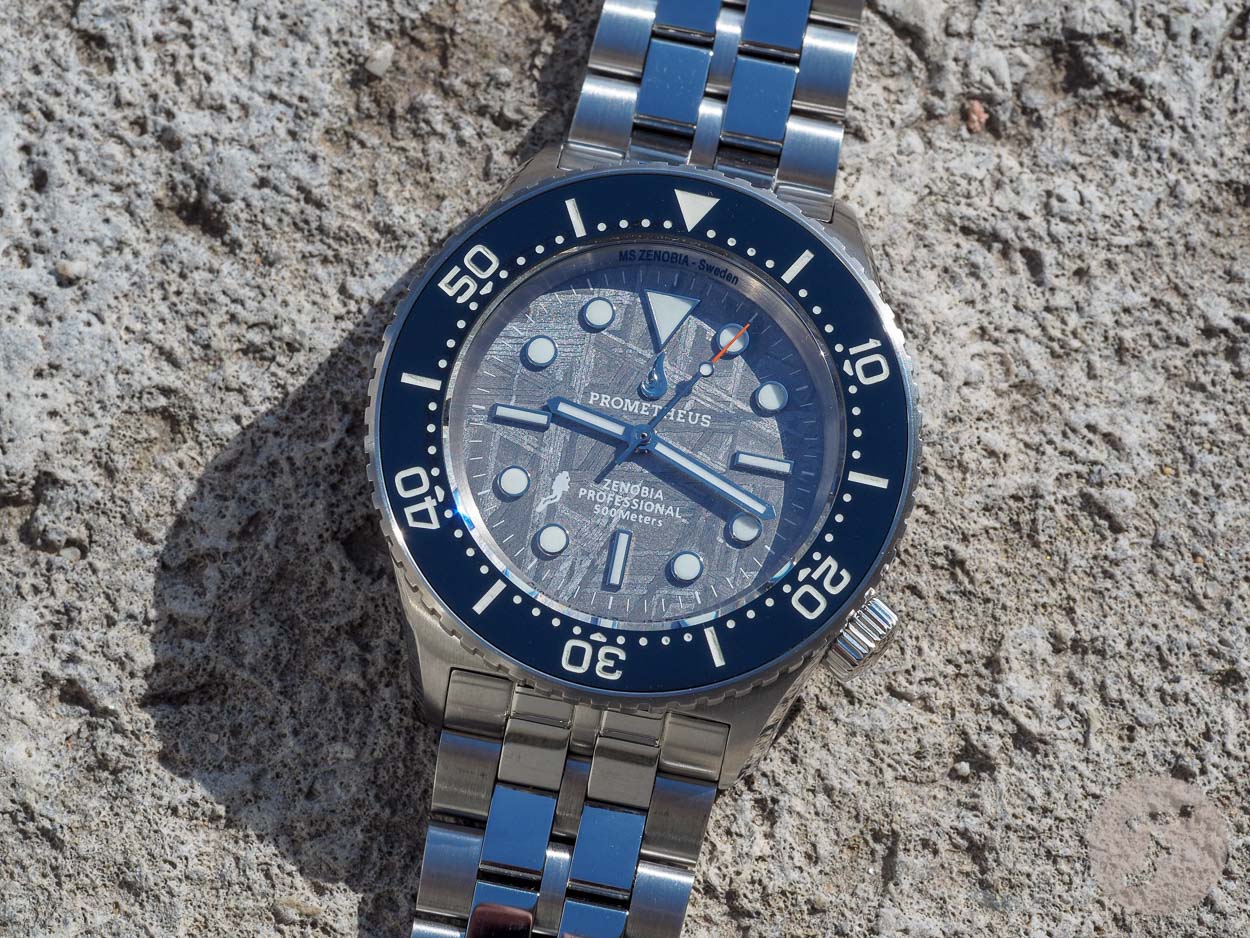 So why would the Zenobia have a meteorite dial as an option.  Well, this meteorite is from the Muonionlasta, which is a meteorite that impacted modern day Sweden (there’s the connection with the watch) and Finland hundreds of millions of years ago.  Composition wise, it’s highest in iron and nickel and it contains those lovely striations known as Widmanstätten patterns. 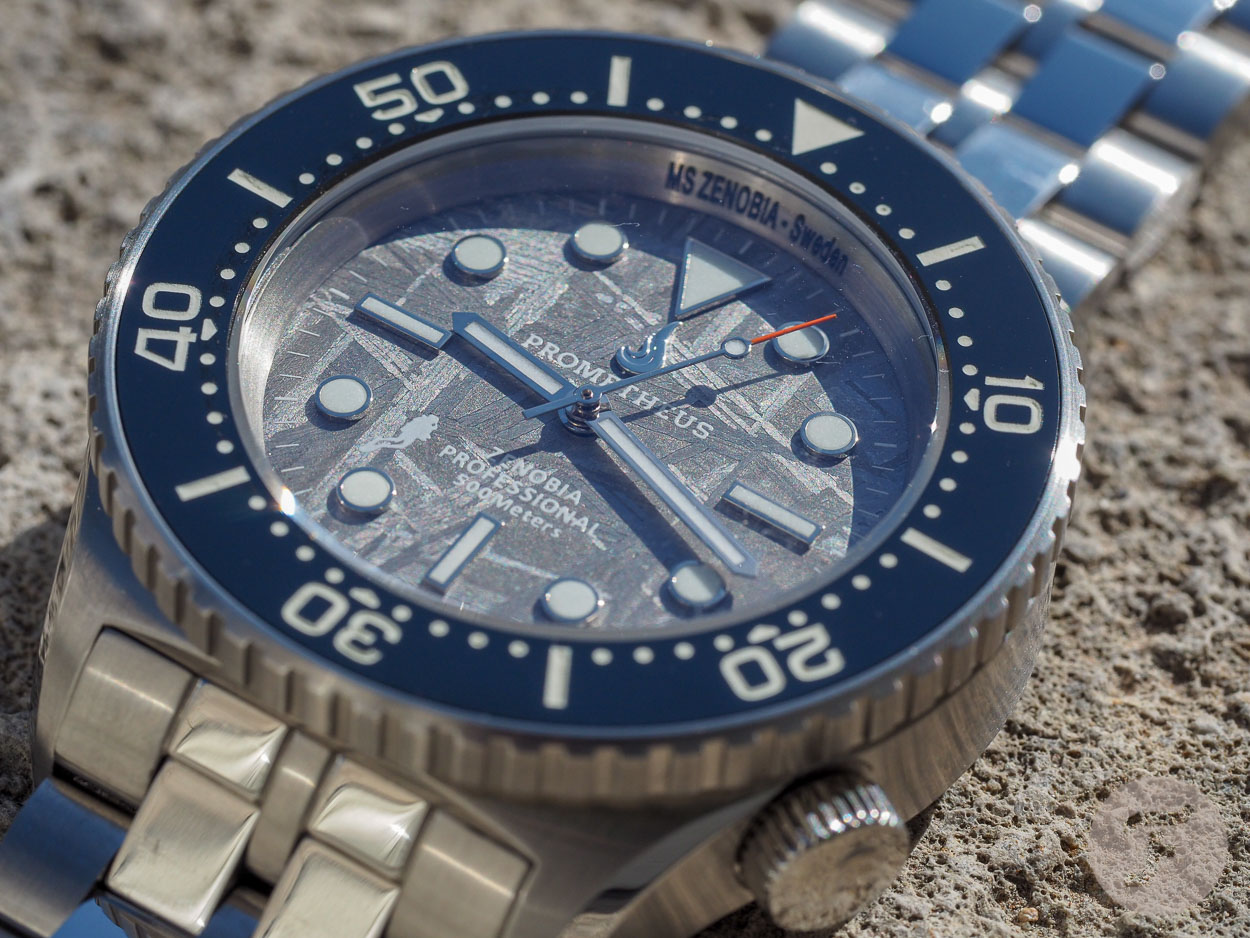 With a meteorite dial, every one is different.  Some probably show as more silver while some may be darker grey.  What I found on my Prometheus Zenobia is that the white writing on the dial blended in quite a bit and the same can be said for the silver applied brand logo and index surrounds.  I actually wonder what black would look like, but it might blend into the darker parts.  The bottom line is that meteorite, due to its variability across even one dial, makes things difficult.  On the other hand, that’s part of the fun and I certainly had no issue of reading the time during the daylight.  One other tidbit worth noting is the chapter ring inscription.  On an otherwise plane stainless chapter ring, there is a black inscription at 12:00 stating “MS Zenobia – Sweden” and another at 6:00 stating “Cyprus – Larnaca Bay – 42m Deep”. 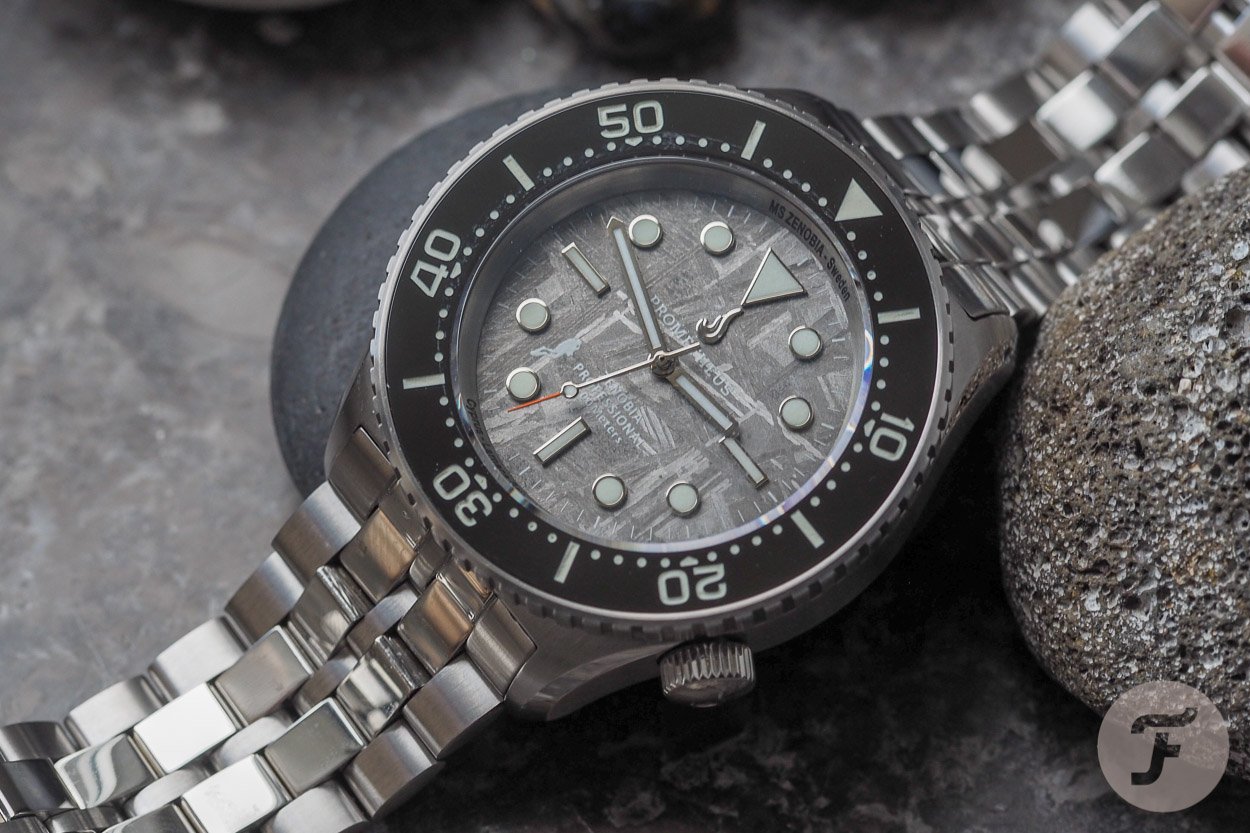 Reasonable and Limited to 300 Pieces

This brings me to the points of pricing, availability, and perhaps the ones that truly count; is this watch worthwhile and who should be interested.  If you choose a colored dial, $550 is the final price ($100 due now and $450 when the watches are ready in mid-August).  The meteorite dial comes in at $750.  All watches will come numbered, with a two year warranty and a travel case.  Regarding my final thoughts about the Prometheus Zenobia, I think it’s a really nice diver and the pricing certainly isn’t offensive.  There are plenty of color options and I really like the meteorite offering even though it does seem that there are more and more watches being released with such dials.  Regarding who would and should be interested in this watch – aside from 300 dive watch addicted members of the DWFG – well, that’s easy!  Anyone who dove the wreck of the MS Zenobia (or plans to do so) and came away with great memories may see this as a relevant keepsake.  Once again, a job well done to Andreas and Prometheus on this small run limited edition dive watch. 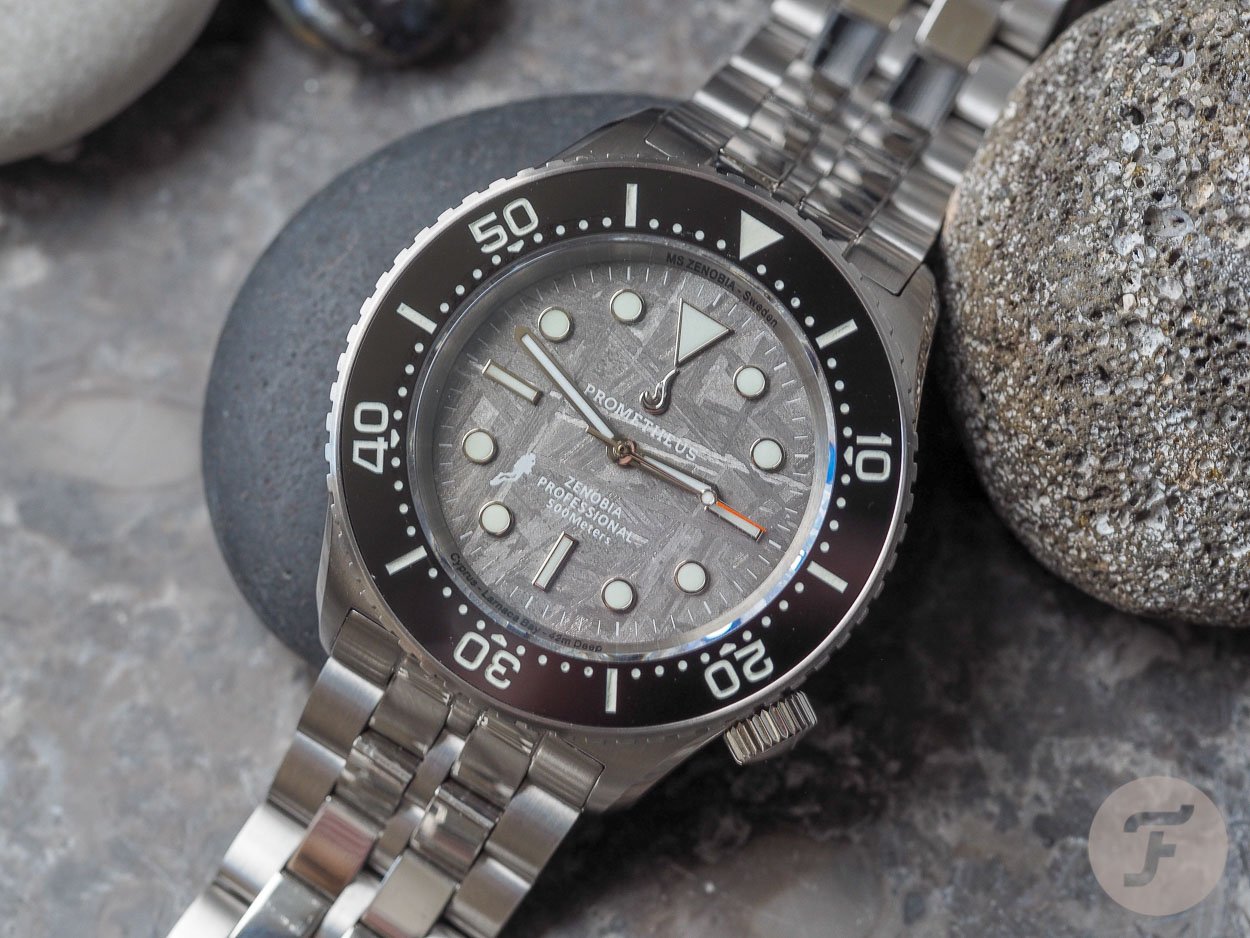 For more information on the Prometheus Zenobia and to see the various dial colors, head to the brand’s official site.