I’m not gonna lie; Reservoir was not on my radar too much before its GT Tour Blue Edition landed on my table. Actually, it landed in front of my door for six hours before I could arrive home to pick it up (thank you, DHL), but that’s another story. Not checking this brand out sooner was a grave mistake because this watch is nice. Like, very nice.

But of course, as you would have it, having a great watch on the wrist is only one piece of the pie. We need to look at other attributes like the movement, finishing, accessories, and the price. So why don’t we jump right in?

If you’re not familiar with the brand, here are some interesting facts about Reservoir. Firstly, while the watches are Swiss Made, the company is led by a handful of French businessmen. So, the watches come from La Chaux-de-Fonds, Switzerland. Meaning, you don’t have to worry about your timepiece not reaching swiss quality standards. Meanwhile, the design and philosophy have French origin. “The Swiss watch industry the French way,” as Reservoir puts it.

Secondly, Reservoir takes inspiration from various areas of life. The brand’s odd, square-shaped logo is inspired by the sides of jerrycans. You know the ones you can see on World War II Jeeps? The dials resemble dashboard speedometers and industrial gauges. For this, the brand found a perfect way to display the time. This is also our final point. Lastly, the watches in Reservoir’s collection all have a retrograde time display. It makes for quite an exciting way of telling the time. 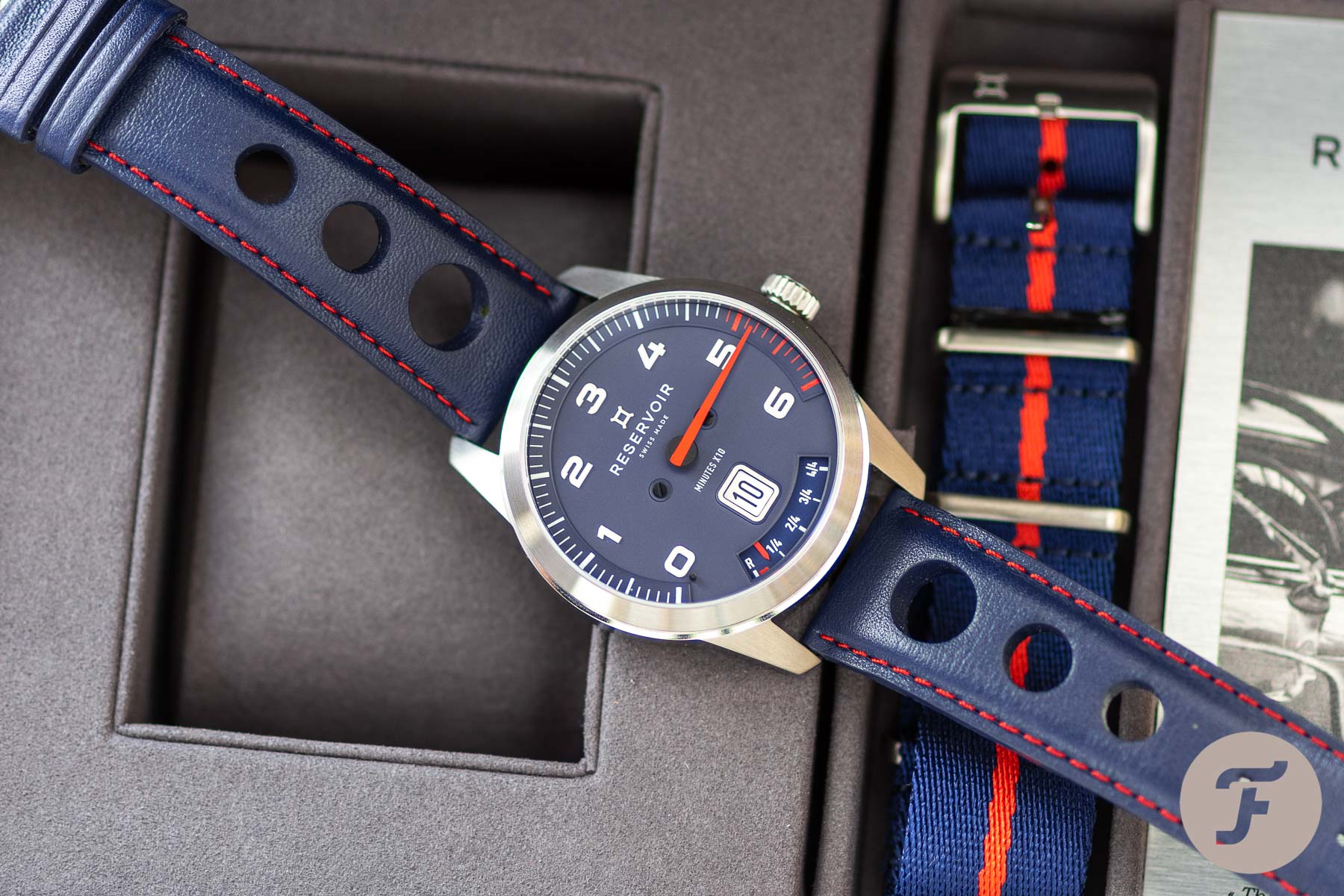 I received the Reservoir GT Tour Blue Edition, which takes inspiration from racecars, as you can tell by its name. As such, the case itself is not where the magic happens. On the contrary, we have a somewhat ordinary steel housing. As far as measurements go, the case is 43mm with a thickness of 13.3mm. The GT Tour Blue Edition takes a 22mm strap.

80% of the case is brushed with only a minimal number of polished elements, like the case back. As you can tell by the width and the thickness, we have a rather large watch here, clearly not for guys with a smaller wrist. Still, due to the 22mm strap, the GT Tour Blue Edition looks balanced. I felt uncomfortable with the large screw-down crown, but I wear my watches close to my hand. 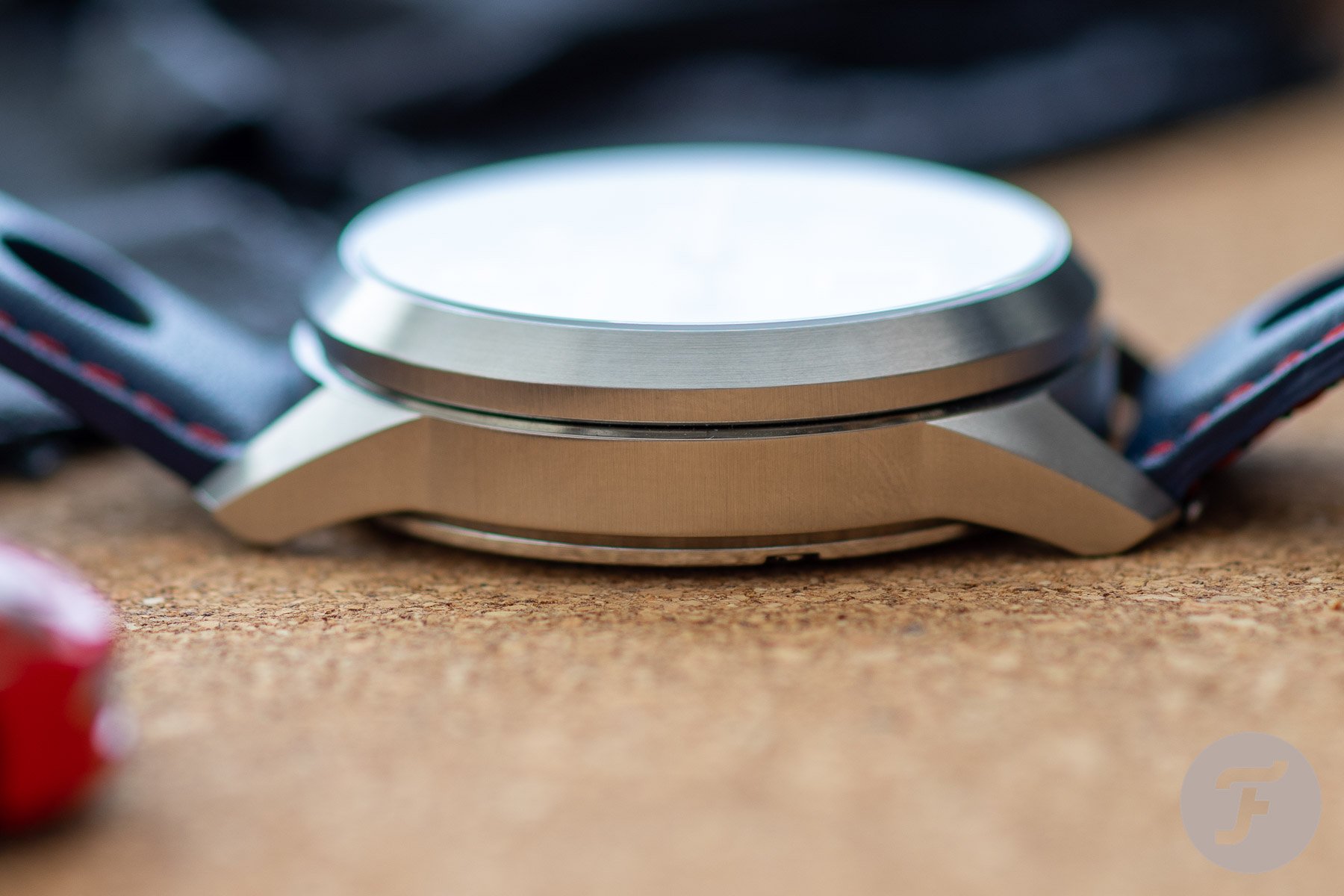 Once we turn the watch over, we immediately see that the case back does not have your average display window. The aperture has the same silhouette as the number scale on the dial, mimicking the dashboard of a car. Like I said, the back is mostly polished with 5 crews holding it to the case middle. Subsequently, the water resistance is not the craziest at 50m.

Since there is quite a lot of space on the back, there’s a lot of information visible about the GT Tour Blue Edition. So much so that I can’t remember seeing this much text on a watch’s case back. Finally, we need to mention the obvious that we can admire the heart and soul of this awesome timepiece through the display back. 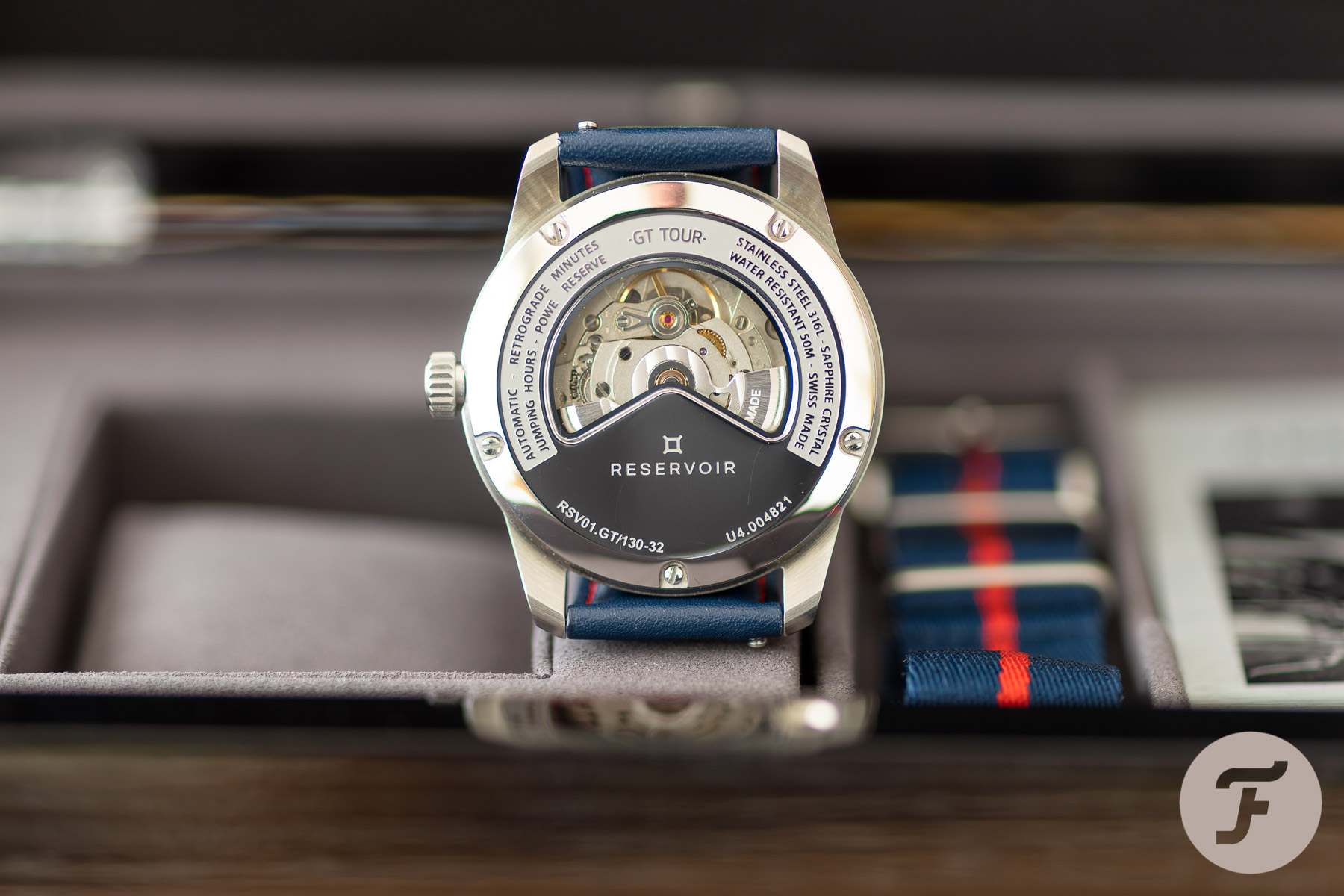 Obviously, the most intriguing part of the Reservoir GT Tour Blue Edition is its dial. These so-called retrograde displays are fun but adjusting to them takes a bit of time. I saw people referring to retrogrades as regulator dials. Well, it is not really the case. There’s a difference between the two, and it’s pretty apparent. Both styles display the minutes and the hours separately, but a regulator uses two separate dials, both indicated by hands. Meanwhile, the GT Tour Blue Edition displays the minutes with a centrally-mounted retrograde hand, with the jump-hours indicated via an aperture between six and center. 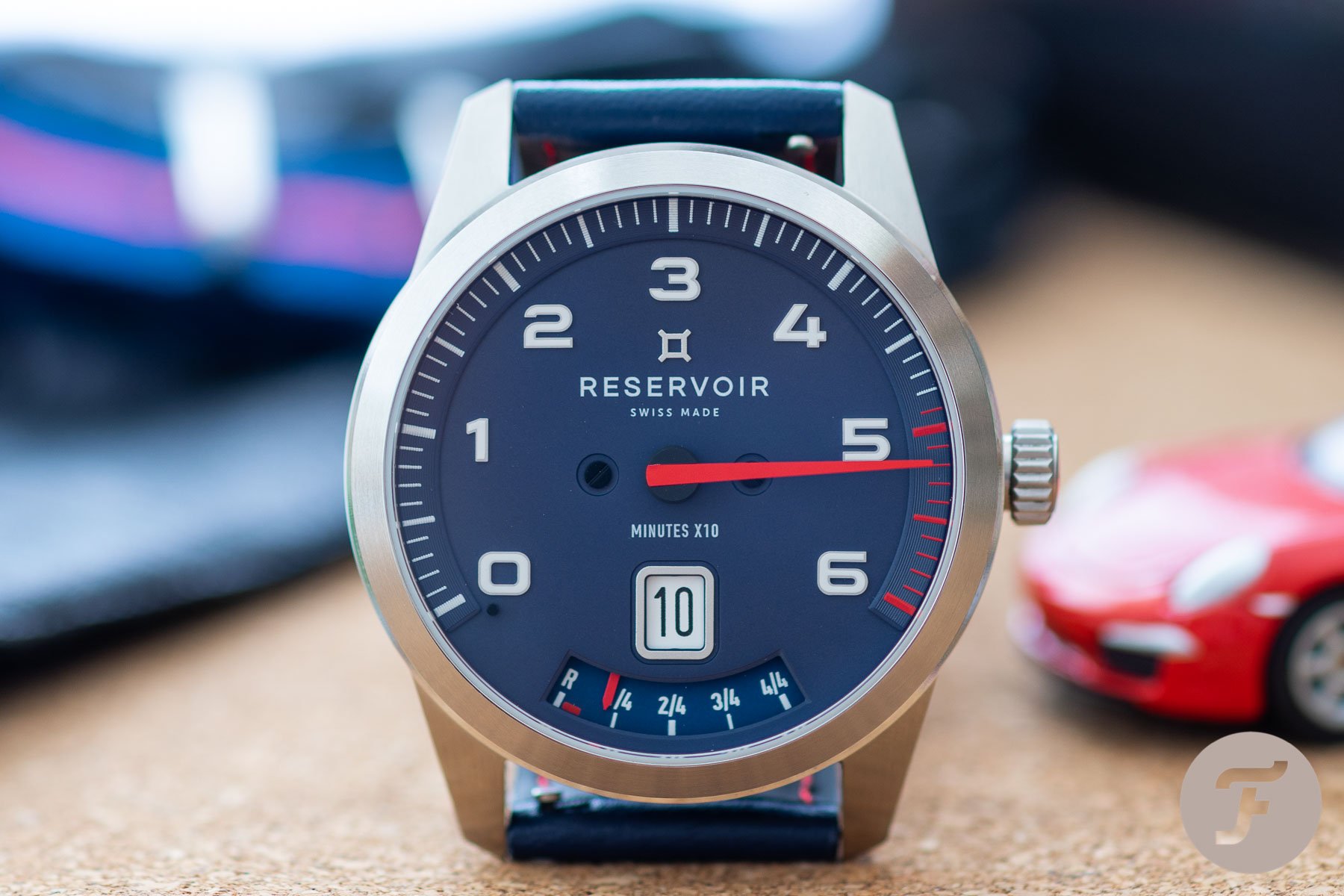 The large aperture at 6 o’clock displays the hours. Additionally, the red had in the middle with the white scale that runs from around 8 to 4 o’clock is for the minutes. Once the time reaches 60 minutes, the red hand jumps back to 0, and the hour wheel in the window below flips to the next digit. At the bottom of the dial, you see the third element. This looks like a fuel indicator, and as a matter of fact, it’s not far from the truth. That would be the power reserve display, which tells us how much juice is left in the automatic movement before it stops. Due to the large numbers and the dial tone (which appears grayer in natural light), the GT Tour Blue Edition is easy to read. 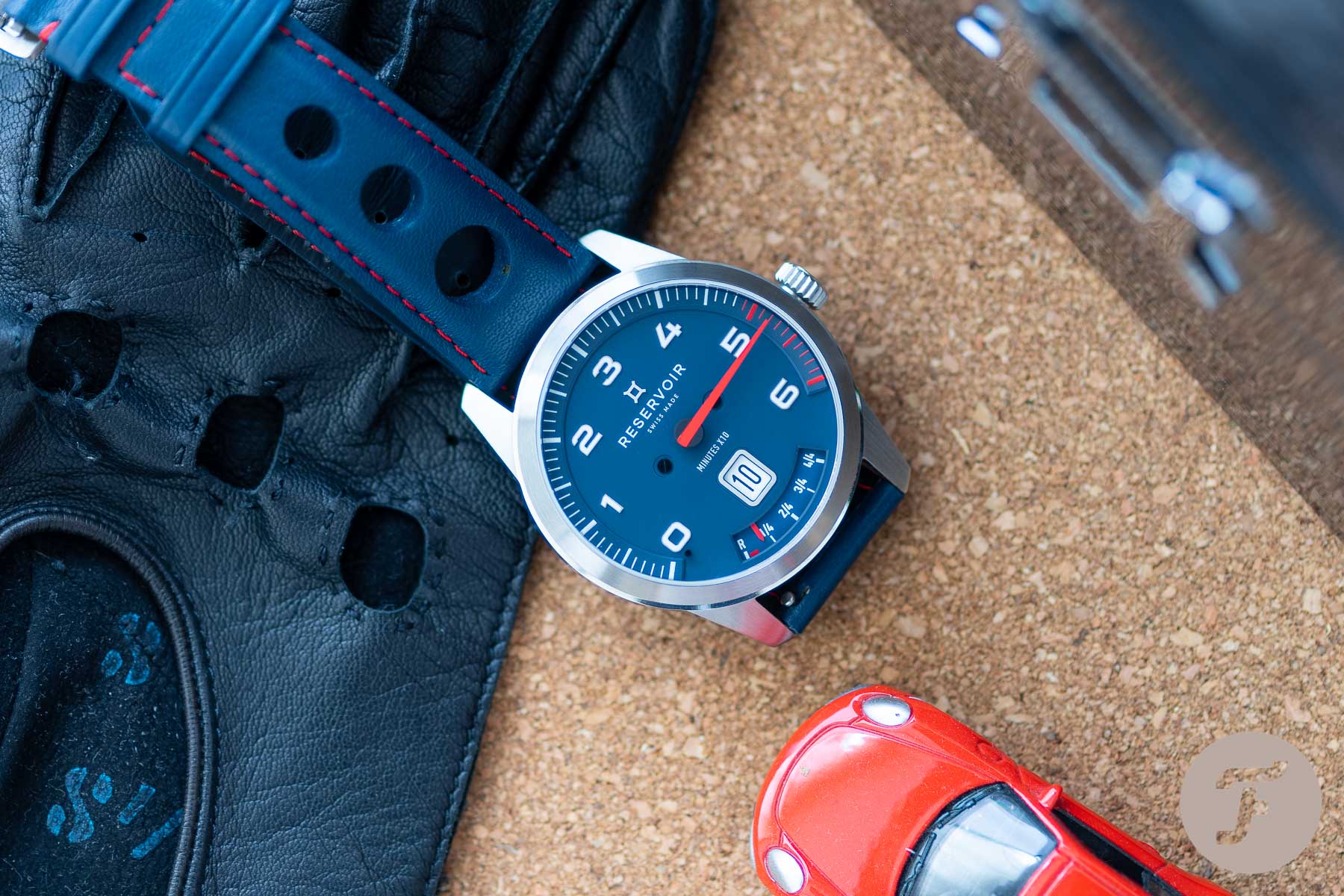 A beautiful car means nothing without a strong engine. Equally, the Reservoir GT Tour Blue Edition needs a great and accurate movement. Hence the company needed to find a caliber that is durable and sturdy with a great timekeeping ability. The brand chose the ETA 2824-2 to serve as the base for the movement. I’m sure most of you have heard about this movement as it is used in a large variety of watches.

The 2824-2 offers roughly 38 hours of power reserve and boasts an operating frequency of 28,800vph. Moreover, it has a hacking system and an accuracy of around +/- 4 seconds per day when top-adjusted. Nonetheless, in itself, the 2824-2 would not have been good enough for the GT Tour Blue Edition. So Reservoir developed their own patented proprietary module to change this movement into a retrograde caliber with a power reserve indicator. 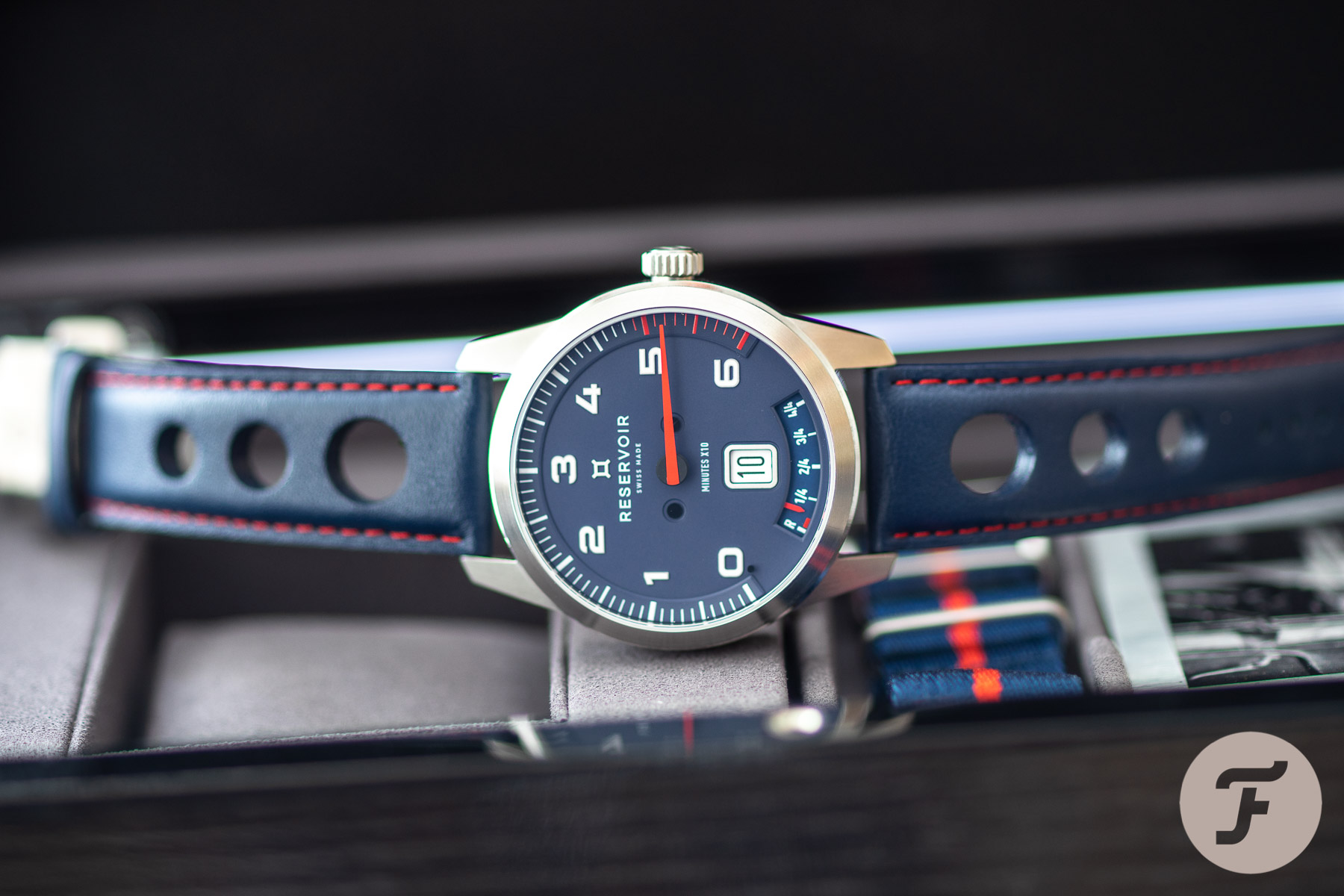 The Reservoir GT Tour Blue Edition comes on a perforated leather rally-style strap with quick release spring bars and a double deployant clasp. It took me a while to get used to the strap as the clasp’s push-button sticks out quite a bit, oftentimes poking into my wrist.

If you are not a fan of leather straps, however, there is an extra Nato strap in the box. For all of this, you would have to pay €3,850, which in my book is a tad too much. Even with the added complication, almost €4,000 for a time/PR watch from a relatively new brand with a niche albeit exciting and refreshing look is hard to comprehend. Aside from that, I loved the watch, enjoyed wearing it, and would be happy to check out the brand’s other models at a later stage.

But I’m curious to read what you guys think of this Reservoir GT Toru Blue Edition, so share your thoughts with us in the comments below. And if you would like to visit Reservoir’s website, don’t forget to click here.