Back in 2017, Porsche claimed its 19th overall victory at the 85th running of the 24 Hours of Le Mans. The endurance race featured an epic comeback for the #2 Porsche 919 driven by Timo Bernhard, Brendon Hartley, and Earl Bamber. Only a few weeks before this win, Singer Reimagined unveiled its first-ever wristwatch. Singer is a Los Angeles-based car tuning house specializing in restoring and upgrading the iconic Porsche 911 Carrera. Specifically, the air-cooled Carreras (964 chassis for car nerds out there) phased out in the ’90s. The Singer Track1 Chronograph also draws from the past to revitalize the classic racing chronograph in an entirely new dial layout. Since the launch in 2017, there have been four further variations on this pioneering design. Yet, I still favor the original Launch Edition ― here’s why.

Born out of obsession, LA-based Brit, Rob Dickinson, founded Singer Vehicle Design to celebrate the classic Porsche 911. Singer carefully modifies and modernizes all components of a 911 with an attention to detail enough to bankrupt Porsche in the 964-era. Some view Singer as “Frankensteining” valuable vintage vehicles. In contrast, many appreciate this approach of harmoniously assembling various parts and design cues into a single concise package. Whatever your view, the results are in high demand. If you like the classic 911 body but wish it had Fuchs alloys, wide wheel arches, a luxurious cabin, and a beefier engine, Singer Vehicle Design has your back. Although, for your own bespoke Singer, you have to have the means. A Singer 911 can start around $300k and quickly escalate beyond $500k once your dreams become a reality. Even so, Singer has built quite the clientele Rolodex with a strong focus on loyalty. 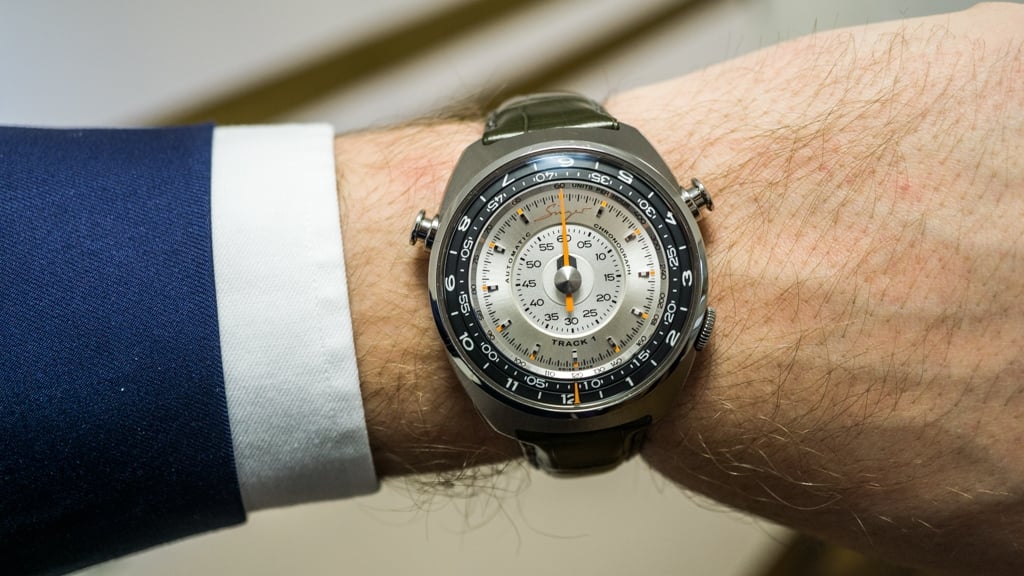 With customers able to provide hands-on input and deep levels of customization, Singer can center around its client’s wants and needs. In doing so, Singer Reimagined was born to broaden its product offerings and expand its branding. The Track1 Chronograph was Singer’s first ever wristwatch and showcased its first original product. A racing-inspired chronograph was a natural place to start, but how the Track1 came to be was more a series of sweeping corners than a straight line.

Marco Borraccino and Jean-Marc Wiederrecht from Agenhor, and Rob Dickinson of Singer share a love of classic racing chronographs.

The Track1 uses the AgenGraphe caliber 6361 developed by Agenhor. By making the chronograph seconds, minutes, and hours the focal point of the mechanism, the real-time display pushes to the periphery. The AgenGraphe was utilized in Fabergé’s Visionnaire watch, but this was a very futuristic timepiece. Conversely, Marco Borraccino and Jean-Marc Wiederrecht from Agenhor share a love of  ’60s style. We featured Borraccino on Fratello on Air, in which he spoke about his vision of reimagining the classic chronograph. By sheer luck, Rob Dickinson of Singer shared this philosophy for reinterpreting the past. The Swiss designers now had a brand name related to sports cars that would complement their vision. 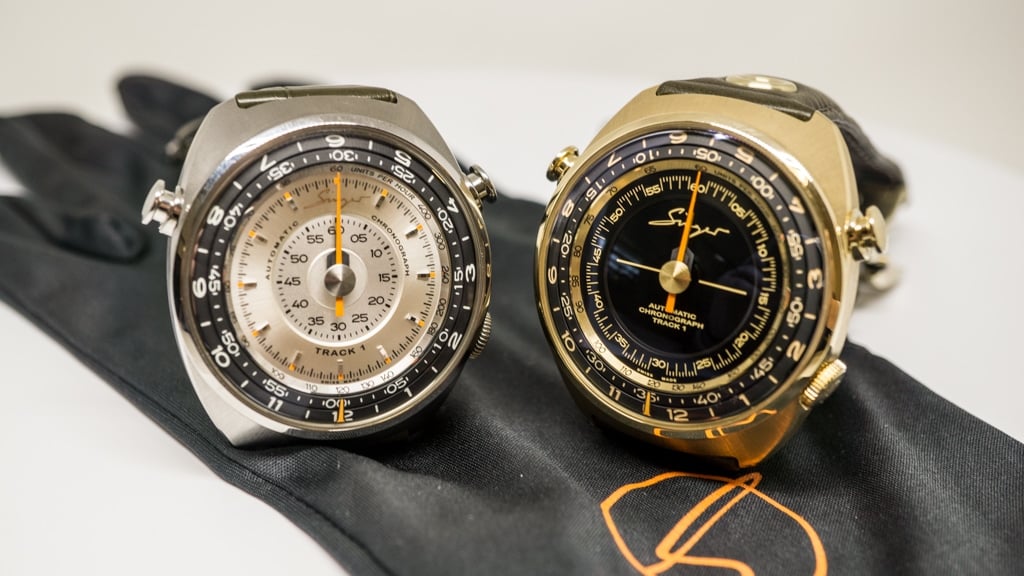 The Singer differs from Fabergé because the Visionnaire had a static dial for time-telling with traditional, albeit floating, hands. Instead, Singer’s Track1 rotates the hours and minutes on independent discs allowing you to read time at the fixed 6 o’clock position. With the luminous numeral time rings on the outside, the chronograph hands can truly shine bright ― orange in this case ― to offer unimpeded legibility while timing laps. The stark contrast of black and white on the dial also references the panda dials of the ’60s. You can certainly spot the lineage from chronographs such as the Rolex Daytona and Heuer Carrera. Carrying this mantra through to the Track1 highlights Singer’s source of inspiration. Also, having contrasting ceramic sectors of black and white with staggered steps adds depth, drawing your eye to that polished central pinion.

The chronograph pushers flank the case at 10 o’clock and 2 o’clock like traditional “bullhead” stopwatches.

But the reason I am revisiting this watch is that I still believe the Track1’s case is the most compelling and beautiful case since its inception. I think this is the most original and stunning watch case since the Bvlgari Octo Finnisimo. The tonneau-shaped case harks back to another era of classic chronographs — namely the ’70s with models such as the Omega Mark II Speedmaster and Heuer Viceroy Autavia. With lugs that extend ever so slightly, the racing-style leather strap almost seems integrated. The chronograph pushers flank the case at 10 o’clock and 2 o’clock like traditional “bullhead” stopwatches with the svelte crown for time setting at 4 o’clock. The symmetry of this design combines with the finely polished bevels that break up the brushed Grade 5 titanium. The steep case sides also create a fluid layout that contours to the wrist. 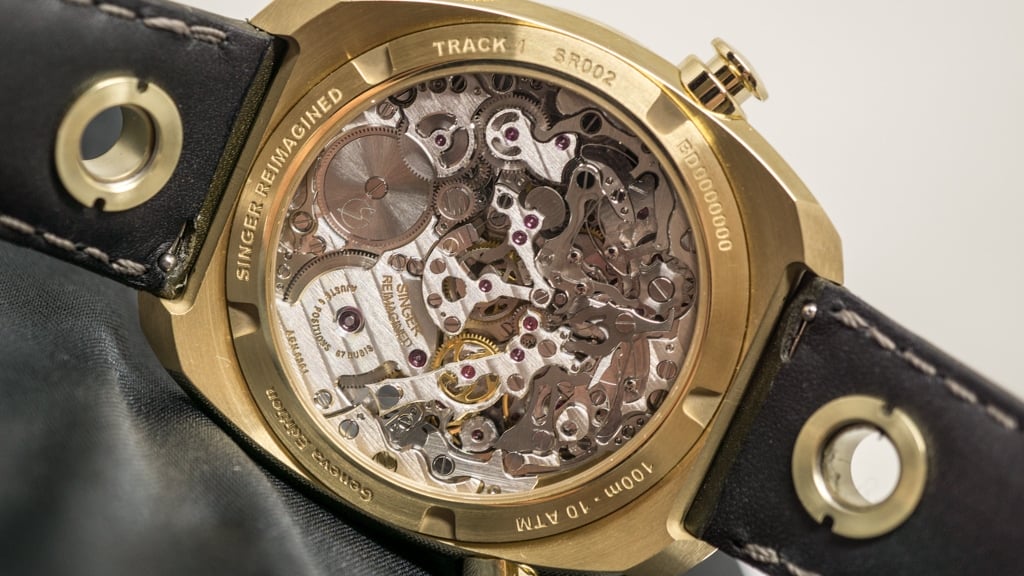 A pioneering movement in an equally exciting watch

You may be forgiven for thinking that this watch is manually wound with the above case-back view. I assure you the Track1 has automatic winding; the case just hides it. The benefit of a peripheral rotor is that it allows the movement to be uninhibited by the self-winding mechanism. The AgenGraphe caliber also quite a sight to behold with gentle sunburst, beveling, and ribbing polishing techniques. And it’s not just a pretty caliber. With 477 components and twin barrels for 55-hours of power reserve, the AgenGraphe is also technically impressive.

I think Singer should sell a dashboard dock for the Track1 for in-car lap timing.

Despite having pump pushers, the watch still provides an impressive 100 meters of water resistance, and the domed sapphire flows effortlessly into the 43mm×15mm titanium case. The original Launch Edition was limited to 50-pieces and came with a $40,000 price tag. At the time, pre-existing Singer owners received preferential treatment on the order list. I first got the chance to go hands-on with this piece during the annual Goodwood Festival of Speed event back in 2017. I found myself in the paddock amongst sumptuous Singer Porsche 911s. Previously, I said that the case shape is the most beautiful I’ve seen since the Octo Finissimo. But as an add-on, I think Singer should sell a dashboard dock for in-car lap timing. The bullhead pusher layout and centerfold chronograph legibility of the Track1 certainly lend themselves to this sporting application ― especially if the car is also a Singer 911. 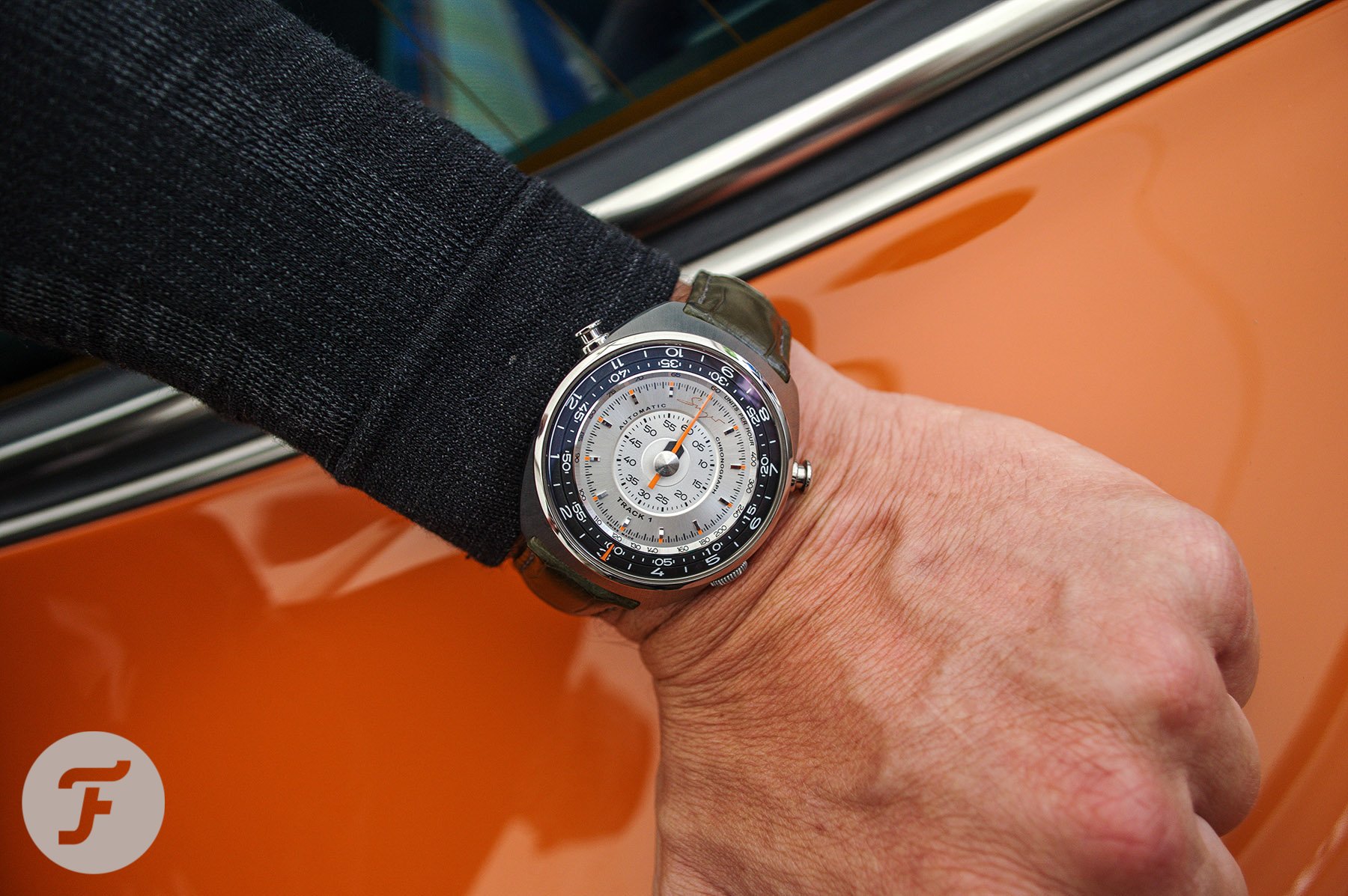 Best Chronograph at the GPHG

At the GPHG awards in 2017, the Singer Track1 Launch Edition was nominated for Best Chronograph. The following year, the Track1 model took the prize home with the Hong Kong Edition. The Hong Kong Edition took the more avant-garde theme with an inky black dial and black ceramic aluminum case. Pushing the chronograph registers outwards from the center cleans up space and allows the orange hands to shine even brighter. Orientating the dial text horizontally also balances the more prominent Singer logo. But to me, the Track1 Launch Edition in titanium is still Singer’s grand entrance into the watch world. Particular attention was paid to the finishing of all elements of the beautiful watch case. And to me, the Track1 still impresses to this day.