Richard Mille must have thought that a watch for polo players doesn’t need a reverse function. Instead, he made sure that the sapphire crystal is simply unbreakable. Six years ago, Richard Mille created their first timepiece for this elegant but hard-handed sport.

Pablo Mac Donough (born in 1982) is an Argentinian polo player who won his first tournament age 14 ( Potrillos Cup). Since 2011 he is one of the elite members of the Richard Mille team and in 2012 the first watch for polo was born: the RM053. Limited to 15 pieces only, created after Mac Donough explained the Richard Mille engineers his world of shocks, blows and forces polo players face in a game that sees solid balls launched through the air at 200 km per hour.

Now, in 2018, they introduce the Richard Mille RM 53-01 Tourbillon Pablo Mac Donough. A Carbon TPT case with a laminated sapphire crystal are there to protect the watch from the rough shocks and hits a polo player has to deal with. Not only that protects the tourbillon movement, also inside there are some precautions taken by the watchmakers at Richard Mille. The movement has been suspended by braided cables basically. Cables which are just 0.27 mm in diameter. ‘The 10 pulleys at the heart of the movement guarantee an even distribution of tension and perfect balance of the whole, what’s more, they provide optimal shock absorption to more than 5,000 g’s.’, says Salvador Arbona, Technical Director for Movements at Richard Mille. 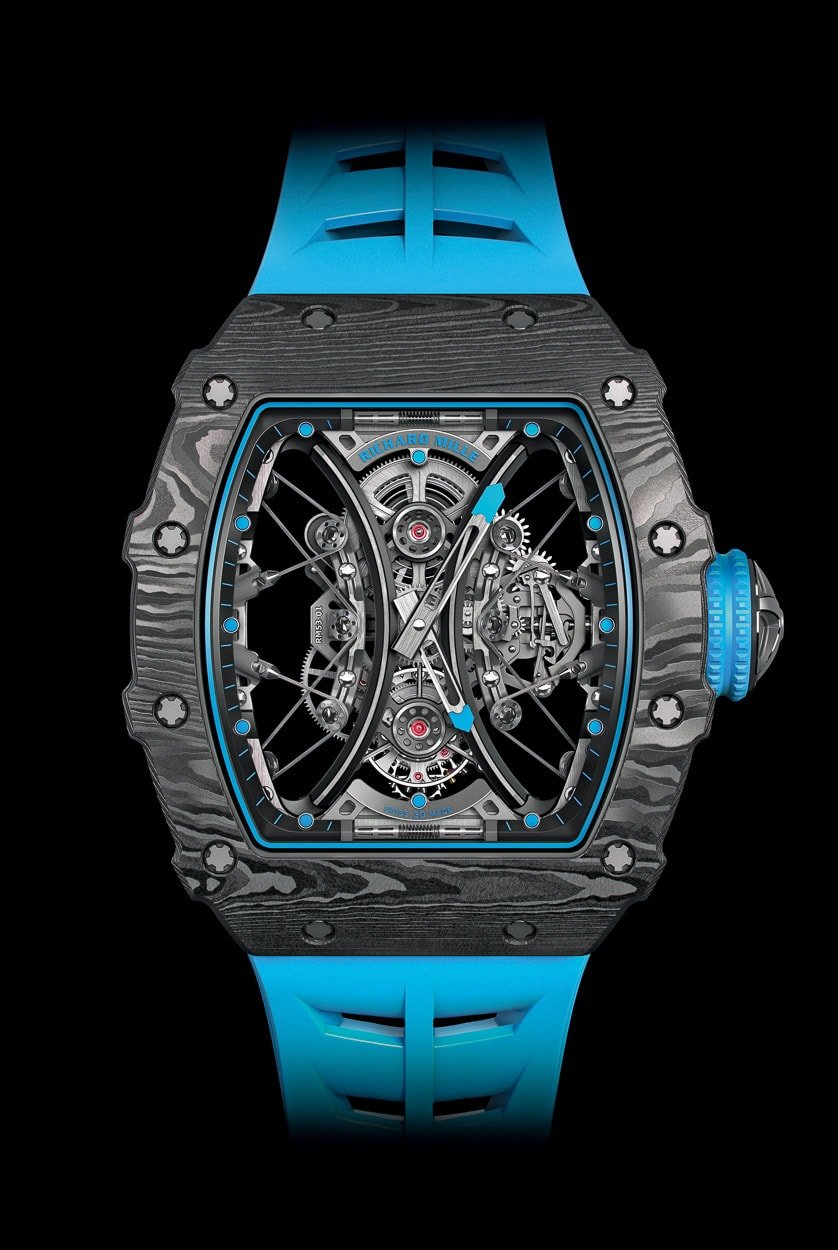 The RM 53-01 Tourbillon is packed with technical high-lights basically, here’s a run-down of the most important aspects:

The main baseplate is attached to the case by 2 braided steel cables, each with a diameter of just 0.27 mm.

These cables are held taut by an ingenious mechanism consisting of tensioners located at 3 and 9 o’clock and 10 pulleys.

A world premiere in the realm of watchmaking, the RM 53-01 is equipped with a crystal of laminated sapphire glass. In case of impact, this glass may crack, but under no circumstances shatter, thereby protecting the movement, as verified during impact pendulum testing, when a metal spike was added to the 4.5 kg weight.

This mechanism guarantees greater reliability when subjected to shock, and hence better chronometric results over time. A more accurate and repeatable calibration is possible thanks to 4 small adjustable weights. 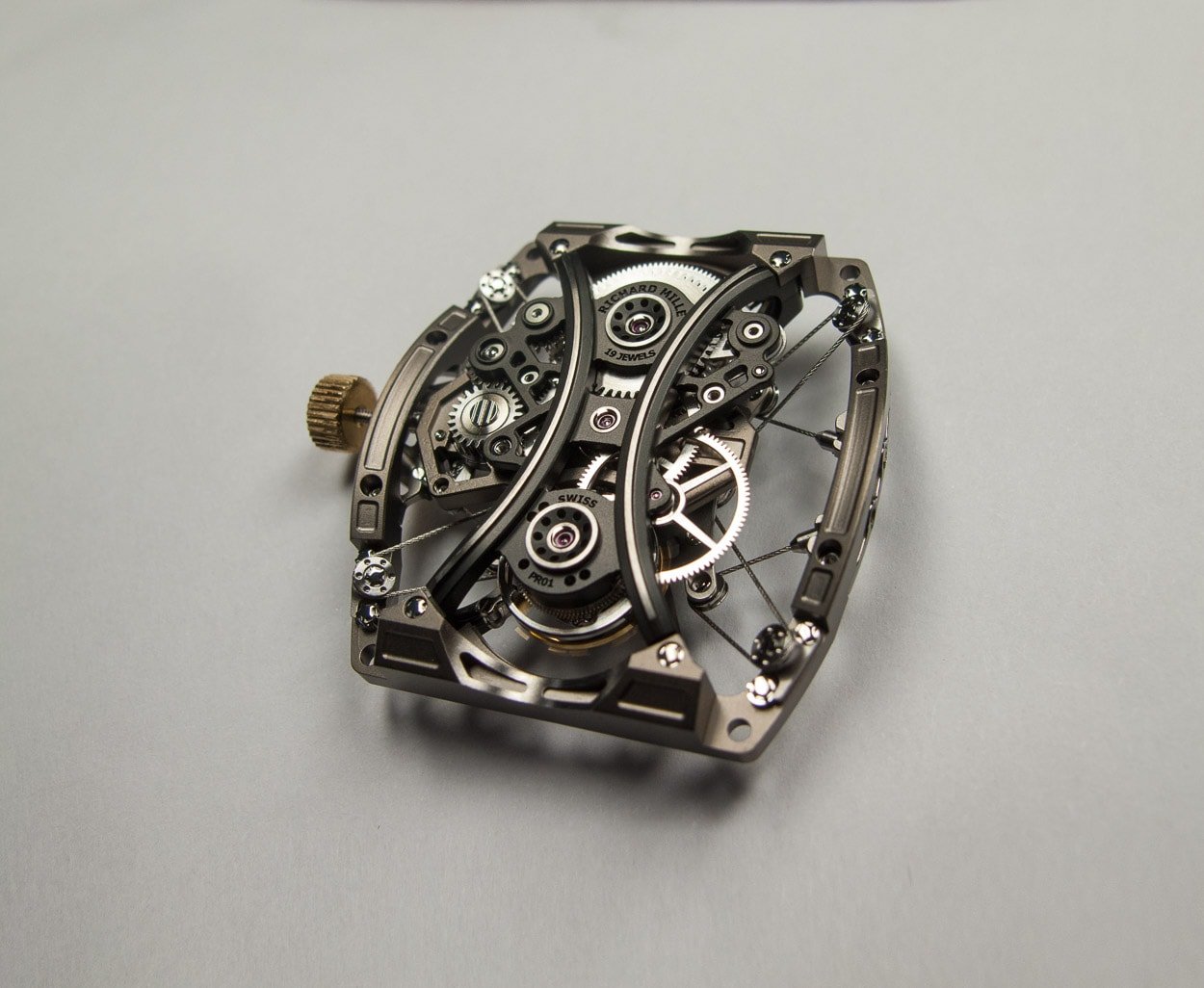 That’s it for now, as soon as we receive more information, we will do a more in-depth write-up. Price at this point is unknown yet.

Hot Topics
Introducing: The Omega Speedmaster Super Racing With Spirate System
162 comments
Design Vs. Specs — Which Is More Important To You When Buying A Watch?
86 comments
The Time To Buy Is Now: How The Current Economic Climate Influences Watch Buying And How You Should React
51 comments
My Predictions For New Omega Speedmasters In 2023
48 comments
A Regret-Free Guide To Buying Your First Luxury Watch — Part Three: Higher-End Options From Omega, Rolex, Grand Seiko, And More
48 comments
Popular
(From The Archives) Shut Up & Read The Truth About Cartier Watches
George Cramer
21
Hands-On With The Seiko Prospex Dawn Grey Series
Robert-Jan Broer
12
Rolex Submariner Hulk versus Seiko SLA019 : Shades of Green
Michael Stockton
29