Last Friday, I took part in a podcast recording for the Dutch newspaper Parool. I spoke with crime reporter and author Wouter Laumans. The topic? Watch robbers.

By coincidence, right after I got home from the interview in Amsterdam, I received this video of a guy getting robbed of his Rolex Daytona in a city north of there called Purmerend.

But let’s go back in time a bit. It was July 5th, and I was in Milan for the Speedy Tuesday event when my phone rang. It was Wouter Laumans, a crime reporter for the Dutch newspaper Parool. He asked me if I had heard about the watch robbery that took place the weekend before on a full terrace in Amsterdam. I had indeed, as it had been in all the newspapers a few days prior. A man was sitting on a terrace in the city center of Amsterdam when, suddenly, a person came up behind him and held a gun to his head.

Screenshot of the CCTV of the terrace — Image (c) Algemeen Dagblad

He wanted his watch, a Rolex Day-Date. The Rolex wearer refused, and it turned into a tussle. As the hooded criminal gave up and fled the terrace, the victim grabbed his chair and threw it at him. Unfortunately, the chair missed its target and smashed into the face of an innocent woman nearby. She suffered two broken teeth as a result. The terrace then turned into complete chaos. 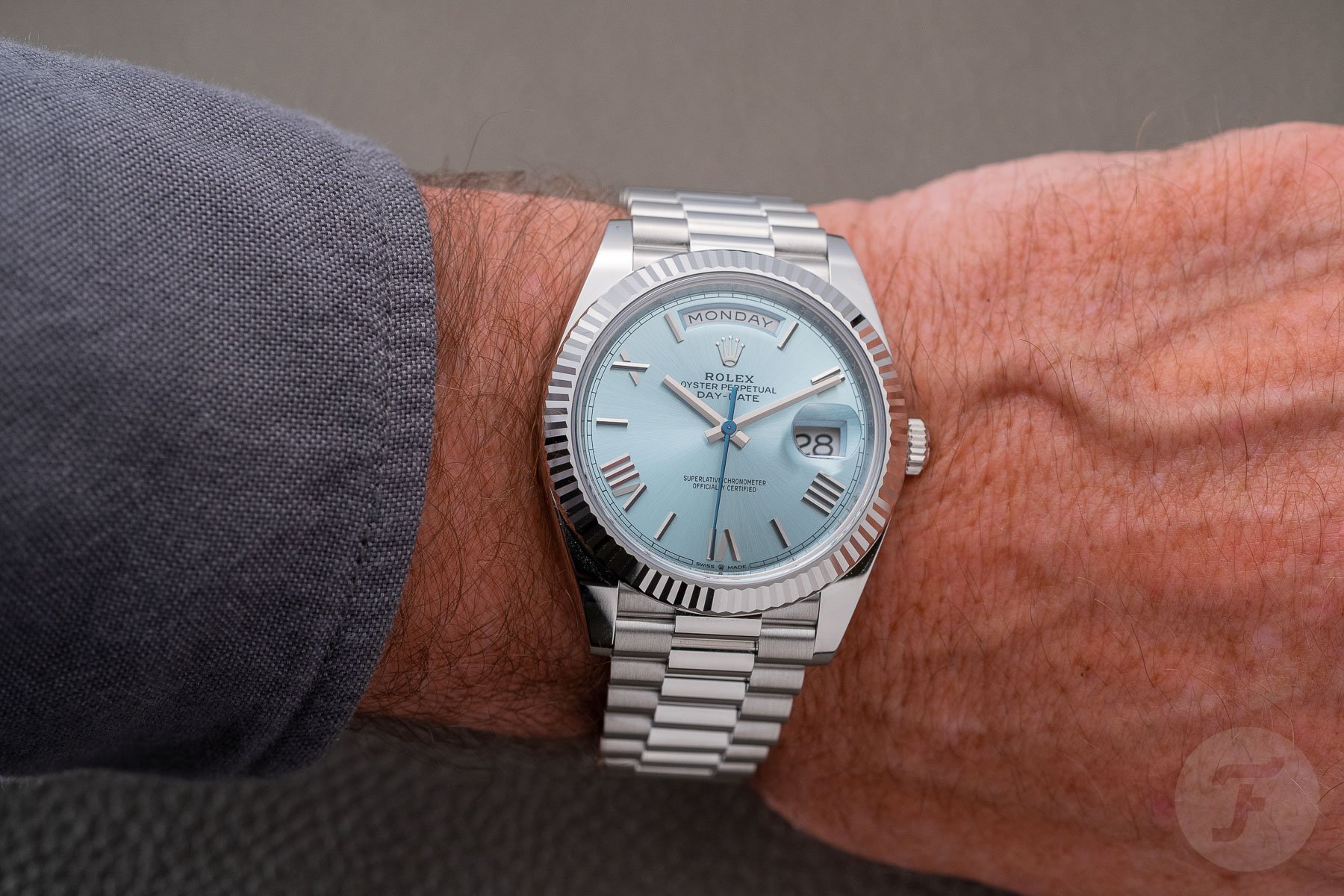 I’ve touched upon this topic in the past, the ultimate low being the murder of a young man, Bas van Wijk, who refused to give up his watch. Afterward, it even turned out to be a fake Rolex. The killer got caught and was sentenced to nine years in prison plus detention under a hospital order. Laumans, an avid reader of Fratello, got in touch with me in July and asked if I would be interested in giving some quotes for an article on the (then) most recent robbery on the terrace and doing a podcast recording with him on the subject. I briefly hesitated, as I try to stay under the radar (relatively speaking, of course) to prevent exactly that from happening to me.

Although I leave my Instagram account public and use my real name when publishing about watches, I keep my home address as secret as possible. I secure all my watches in an external safe, and I make sure not to tag any location on social media that could hint at my residential address. Still, I decided to do the podcast. But it was not so that I could get my 15 minutes of fame in a large Dutch newspaper; I don’t want to sound arrogant or snobbish, but Dutch readers only constitute a small portion of our audience. Rather, I did it to raise awareness. 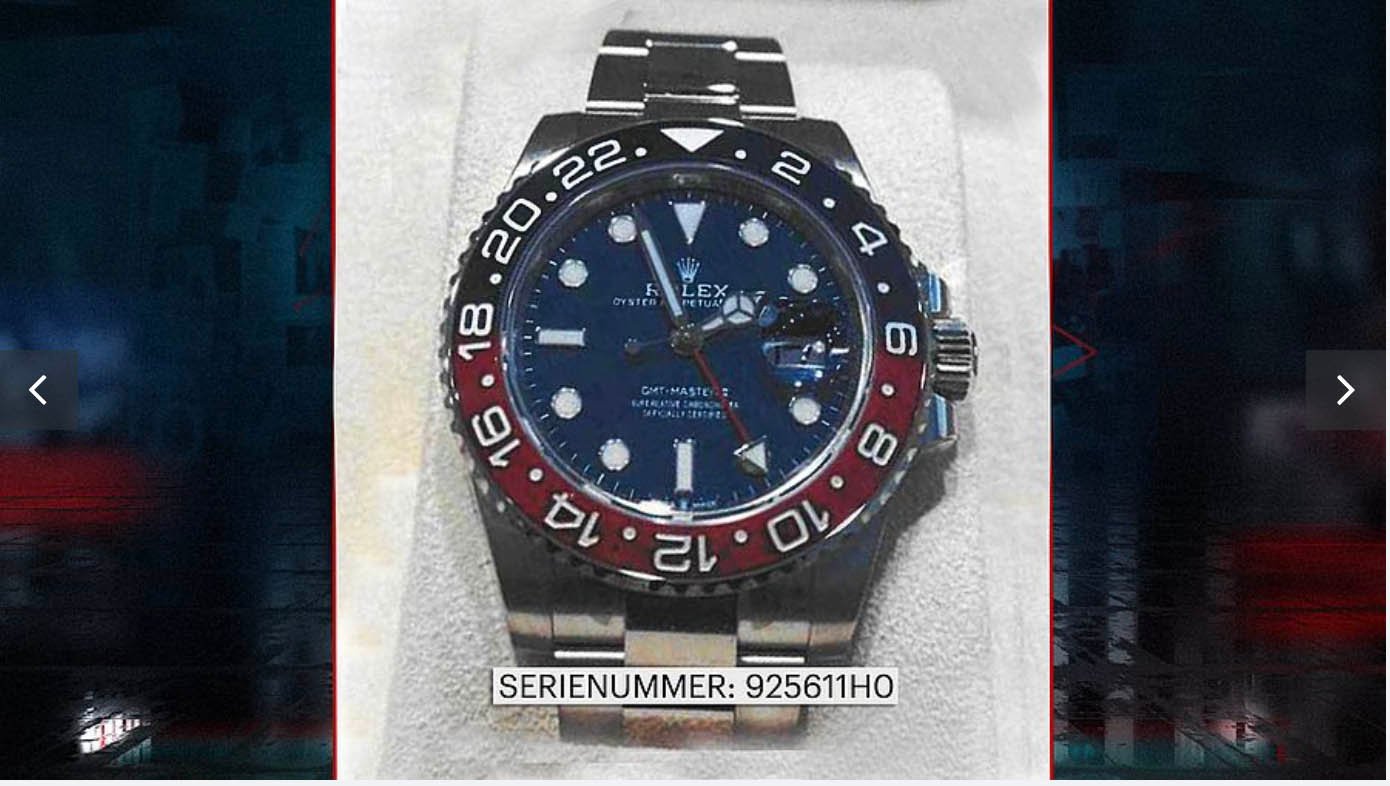 Robbery in a parking lot

After mainly robbing famous people of their watches because they flaunted them on social media and were easy to track (also using social media), we now see that robbers are going after fairly anonymous people. For example, last June a husband and wife were targeted and violently attacked in a parking lot for their watches. The couples’ Rolex GMT-Master II and Datejust were the only things the robbers cared about. 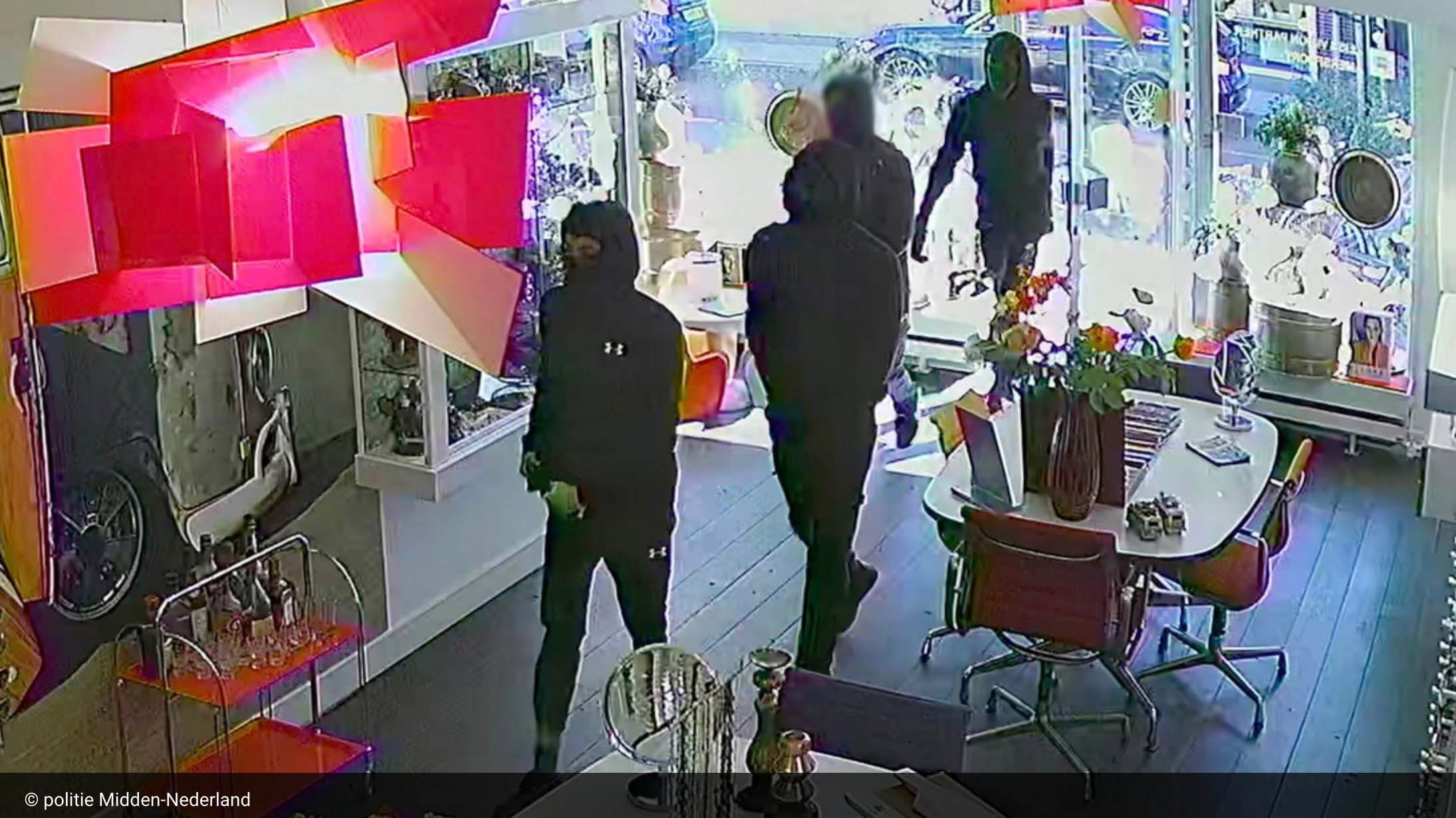 German shepherd to the rescue

And then, also in June, there was an optician who was just letting out some clients when four men suddenly came in, fully dressed in black and armed. They weren’t interested in the glasses or the register. No, they wanted the owner’s Rolex. His wife had given him the watch 25 years ago after saving up for it for quite a long time. But after the robbers got his Rolex, they also wanted his wife’s. They started to go up the stairs (where the couple lives), but their German shepherd came down the stairs, ready to attack. The four men fled, having left not a trace. 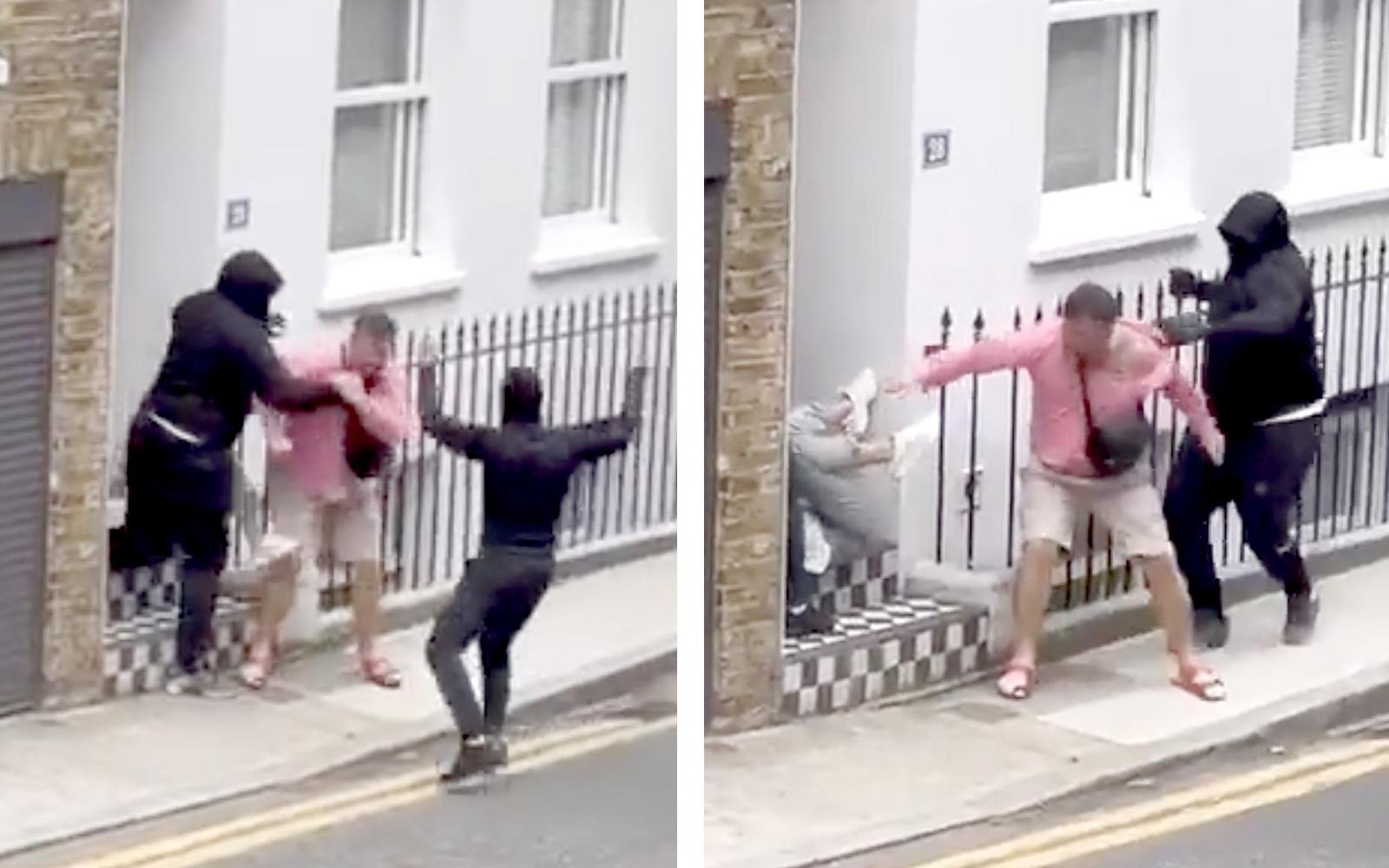 London, the watch-robbery capital of Europe

These are just a few examples that made the headlines in newspapers, but there are many more. And it’s not only in The Netherlands. We’re still somewhat OK compared to a city like London, where the police have registered no less than 621 robberies of luxury watches this year alone. By now, I’m guessing you’ve all seen the videos on social media. 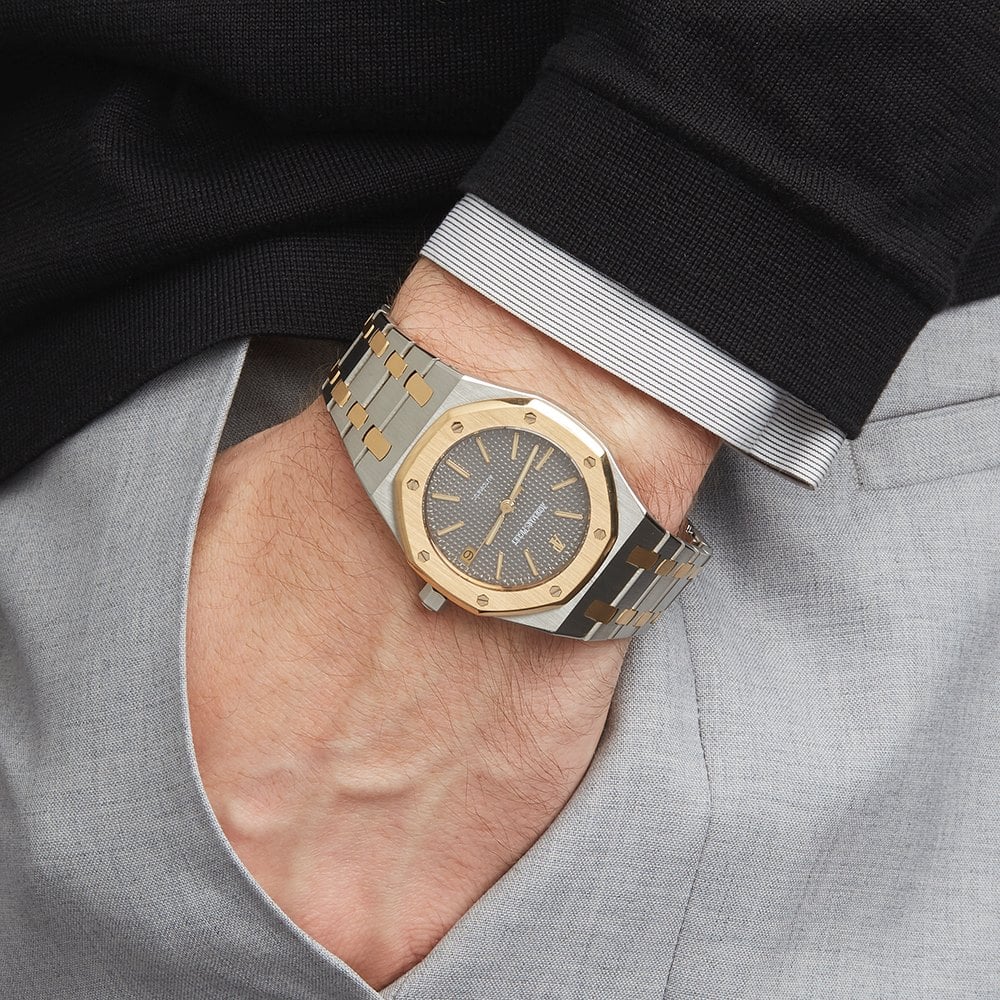 Image by Xupes, but the same watch as in the anecdote below.

The time they left a Royal Oak untouched on the nightstand

In the podcast, Wouter Laumans, Lorianne van Gelder (the host), and I talked for around half an hour about watch robberies and tried to explain to non-watch-enthusiasts what’s happening here. At one point, I told an anecdote about a friend who experienced a home burglary. It was probably in the mid-’00s, and when the family wasn’t home, someone broke into their house and shed. The burglar(s) stole a television, a frying pan (I kid you not), and a bicycle. They went through the entire house, including the bedroom, and left his Audemars Piguet Royal Oak alone on the nightstand. They can’t have missed it, but at the time, it was a watch for the enthusiast, incredibly niche. Things have changed drastically since then. 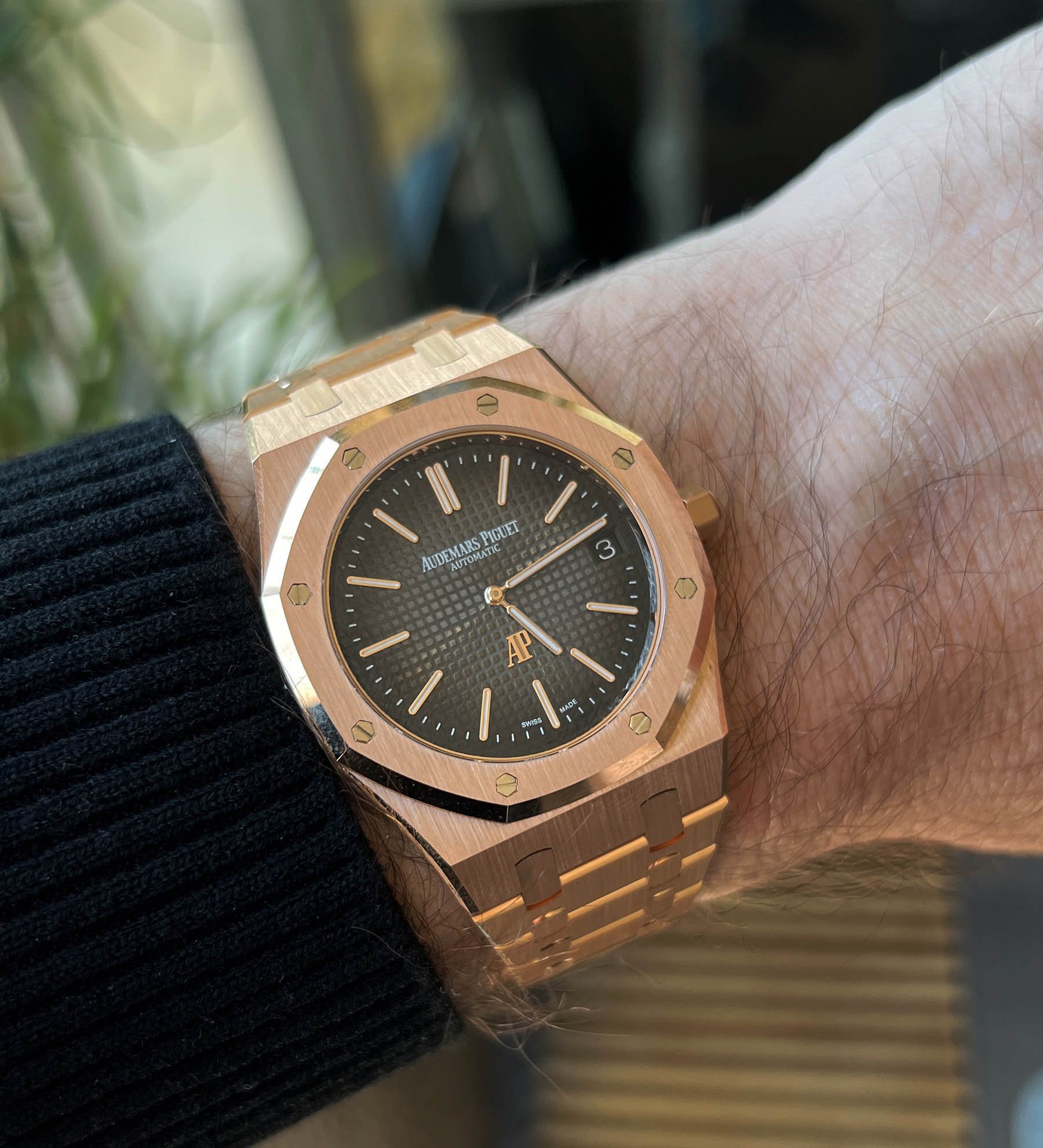 You can still wear your prized possessions in Switzerland

I found myself in Crans Montana, Switzerland only a few weeks ago. Omega invited me to come over for the European Masters during the weekend. Walking around in this beautiful little mountain town, I was surrounded by people wearing the most beautiful watches (I spotted Rolex, Audemars Piguet, Patek Philippe, Cartier, A. Lange & Söhne, Parmigiani, and of course, watches from the game sponsor, Omega). At some point, a guy passed me on his bicycle, casually wearing his full-gold Royal Oak. Nobody seems to be occupied with potential danger.

I was in Geneva for Geneva Watch Days a few days later. There, when walking from one hotel to the other, I bumped into more people I knew than if I’d been in my hometown for 20 years and walked to the grocery store. When I sat on the terrace with my colleagues Ignacio and Sinara, enjoying a €50 hamburger (no kidding), I saw several people at tables around us wearing expensive luxury watches. No one seemed worried in the slightest. 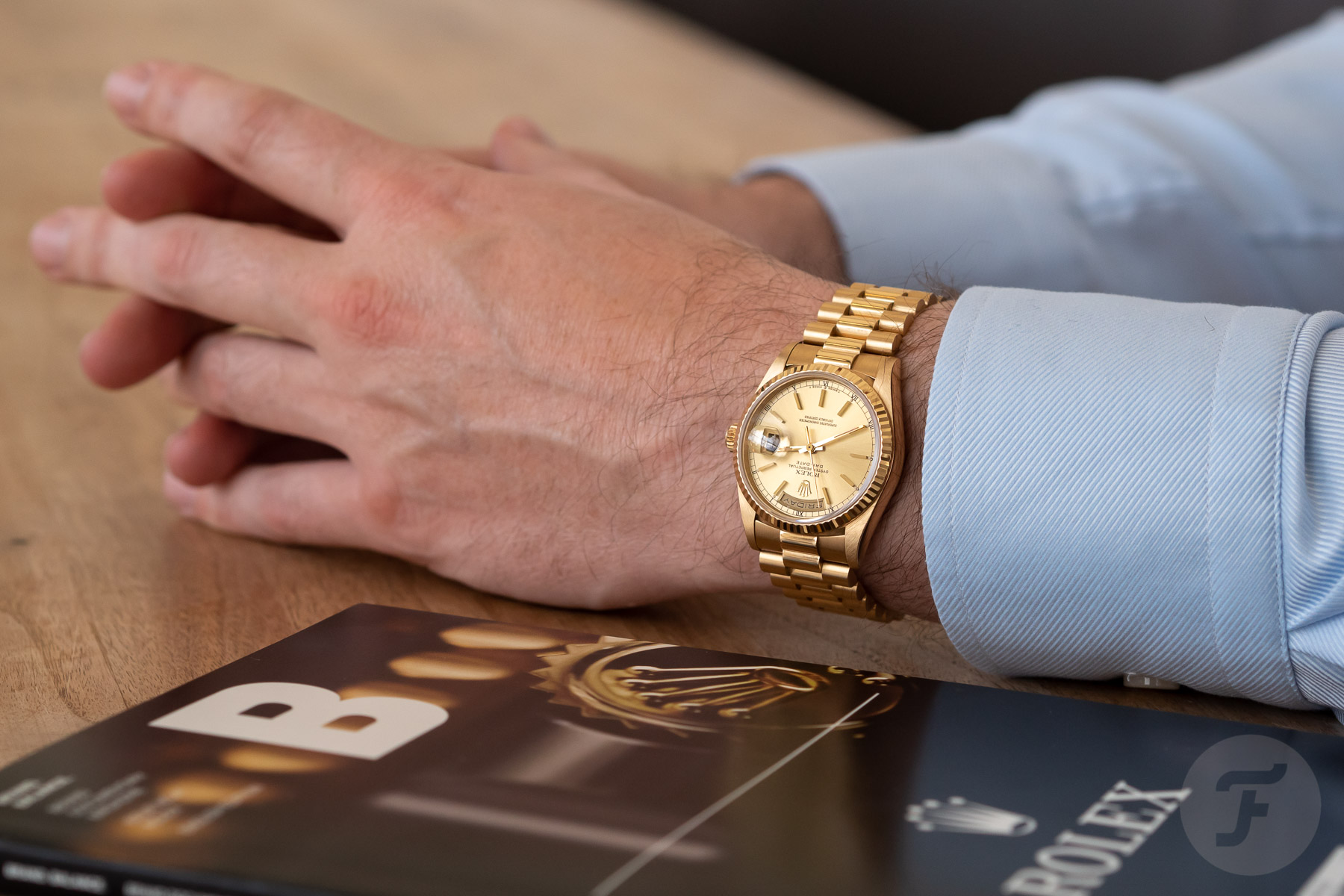 I don’t wear them to the city anymore

But whenever I’m at home, I carefully think about where I am going and if an expensive watch is suitable. The other week, I watched my daughter’s field hockey game wearing my Day-Date, and that worked out fine. But when I realize I have to go to the city to run a few errands, I quickly switch my watch for something less noticeable. It’s a pity, really, but I know that it’s necessary.

Until five years ago, I had only been approached by random strangers twice. One guy, who was wearing a Submariner, asked about my Sea-Dweller as he didn’t recognize what it was. The other time, I was in a bar when a group of guys came up to me to ask if my watch was real. After a quick analysis of the group, I happily confirmed it was a “fake”. 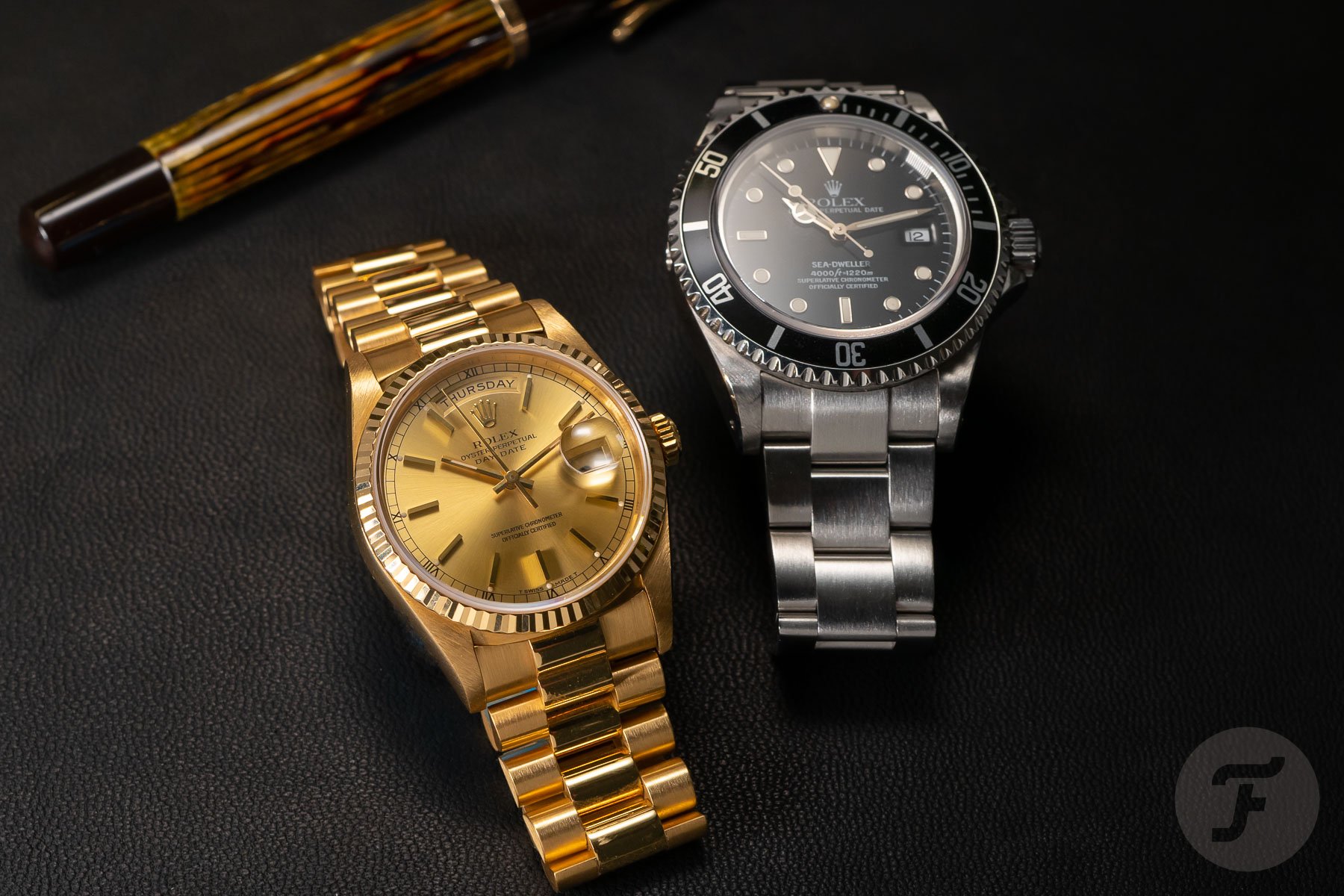 In recent years, though, whenever I wear a Rolex, total strangers come up to me and ask about it or comment on it. But the situations that I don’t like at all are when a person is looking at my watch for too long, doesn’t say anything, and gives a nod to his companion(s). I’ve encountered it several times and often make sure to get out of there. So far, it has only happened when wearing a Rolex. Nothing ever happens when I wear my Omega Speedmaster, Grand Seiko, or something else. Well, except when I’m wearing the Ploprof. That watch is the main attraction it seems, but always in a much friendlier way than with one of my Rolex watches.

In short, wearing a Rolex has made me aware more than once that it attracts (negative) attention. It makes me sad because Rolex makes very good watches, as Thomas explained recently. Additionally, you could debate whether ADs are contributing to the problem by asking prices higher than the official MRSP or trying to make you purchase other things as well (at full retail) in order to buy the Rolex model you want. This is called tying, and it’s often illegal. 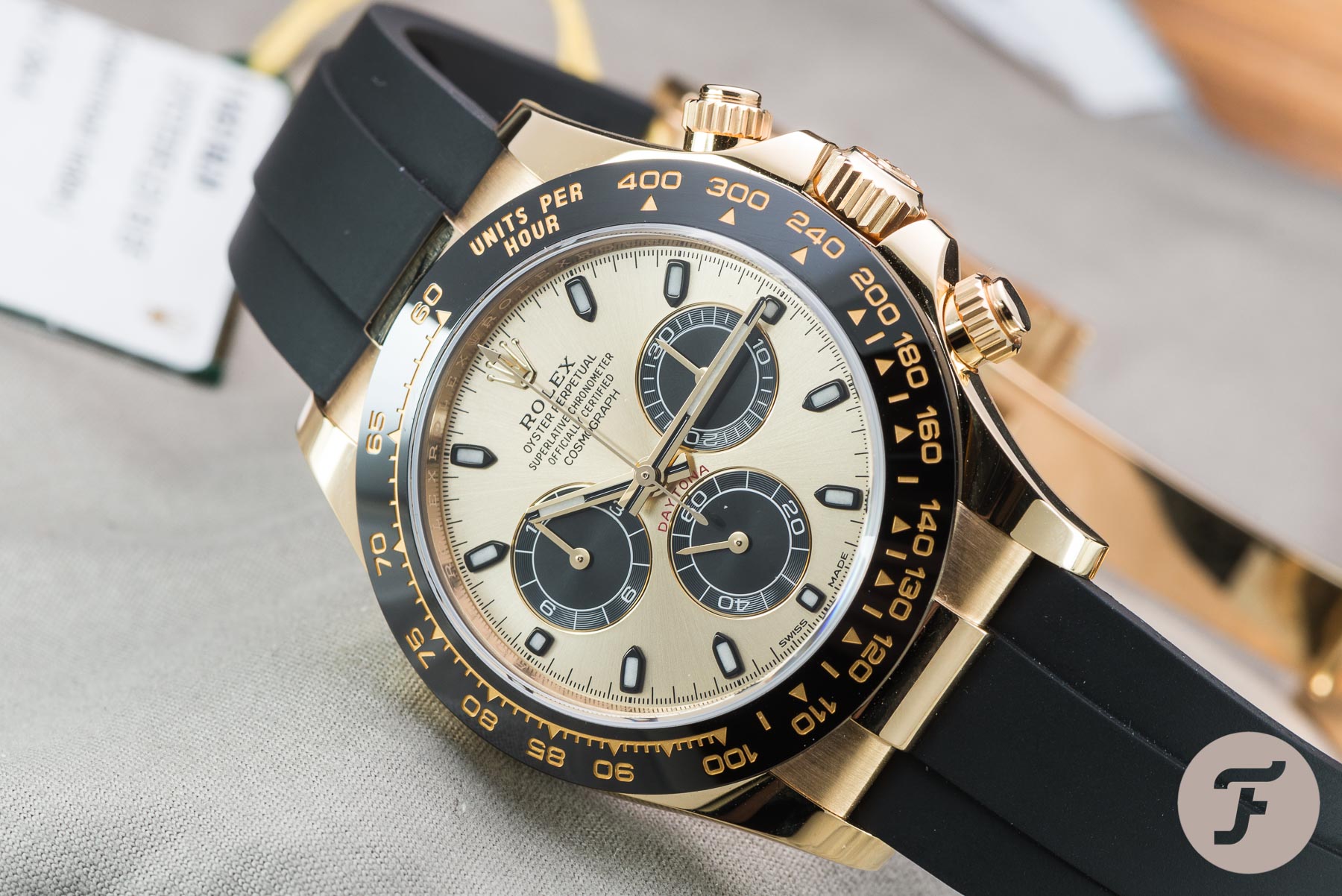 Making people aware of these risks when wearing their Rolex

Most likely, none of this is news to you. The podcast, however, is aimed at a broader audience, and I felt it might be a good way to make them aware. Rolex is mentioned often in this podcast because these watches have become a “currency.” In the past, if you had stolen goods, as Wouter Laumans explained, you’d get 25% of the value. That was a rule of thumb amongst thieves and fences. With a Rolex, however, that is not the case. You will get the market value or perhaps slightly below it. The brand also makes so many of these watches that they easily disappear into the masses. It’s very different from when you try to sell a stolen limited-edition watch, for example. These will often surface, as I experienced with two stolen Speedmaster “Speedy Tuesday” models.

Perhaps some podcast listeners have already owned their Rolex watches for decades and don’t give it much thought. We don’t want them or anyone else to end up in a parking lot, tied up in the stairwell, and wounded because of their watches. So please, before you go somewhere, consider whether it is an environment in which you can wear your watch safely. But also, dear Fratello reader, make sure not to become a target because of your watch. It’s not worth it. Be careful.

The podcast with Wouter Laumans (in Dutch) can be found here.

What kind of precautions do you take? Have you ever experienced a watch robbery? Please share with us in the comments.