The Royal Oak Offshore has been incredibly popular since its introduction in 1993. At some point — seems like ages ago — almost everyone neglected the regular Royal Oak, including the 15202, and went completely mad on all the Offshore variation. The Safari themed Offshore was everywhere, for example. Today, I’ll take a look at the Royal Oak Offshore 44mm chronographs.

For a long time, I neglected the Royal Oak Offshore. Too loud, too flashy, too much everything, basically. That changed when we visited one of the biggest Royal Oak Offshore collectors in The Netherlands in 2018 and did this long report on the original Royal Oak Offshore, also known as ‘The Beast’. If you haven’t read it, you should. 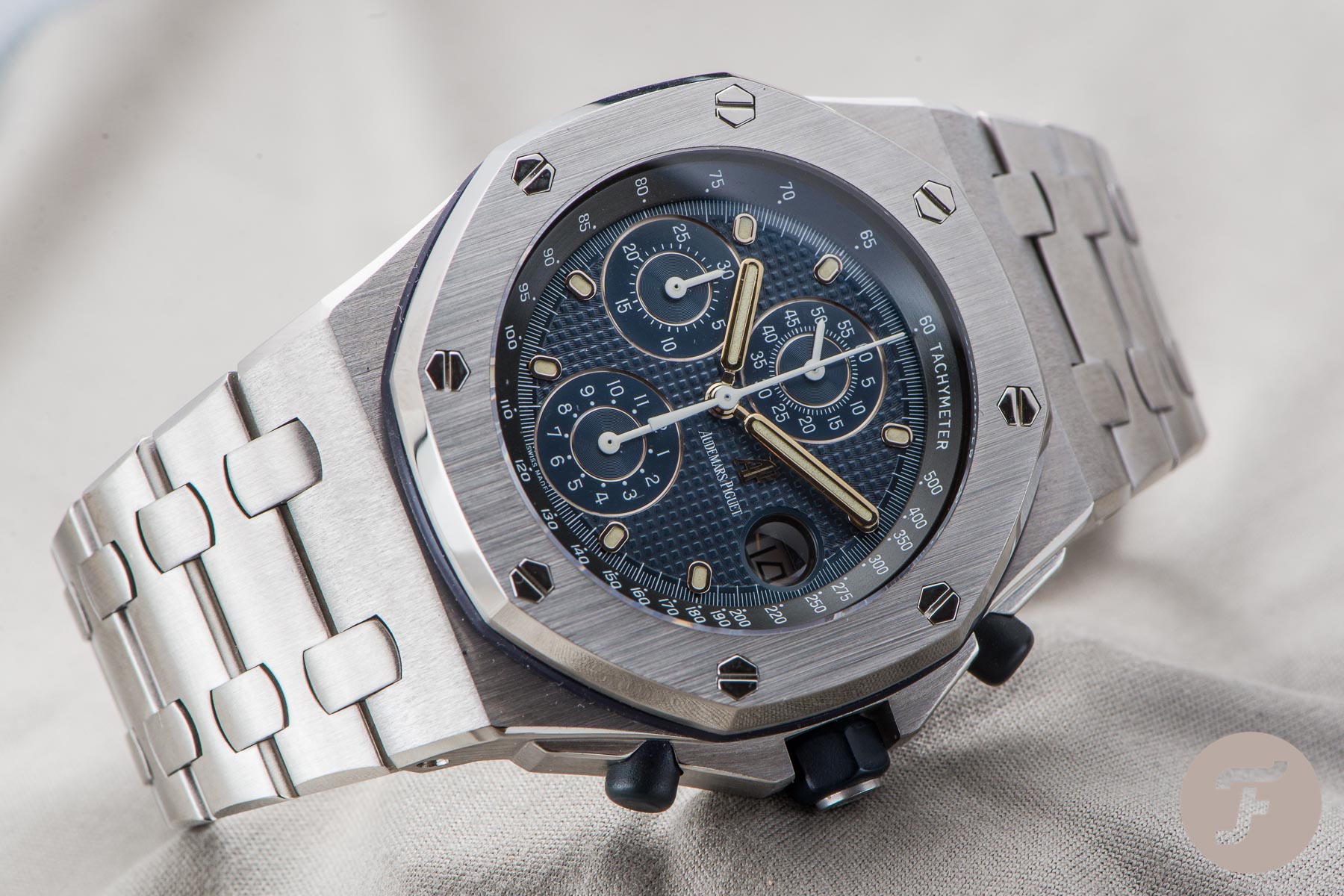 Playing around with those Royal Oak Offshore watches, I realized this watch is a classic too. And that they actually still look good, even those very first 1993 models. When Audemars Piguet gave us a call that they had some new Royal Oak Offshore models in, we didn’t have to think long. Let’s have a look at them. 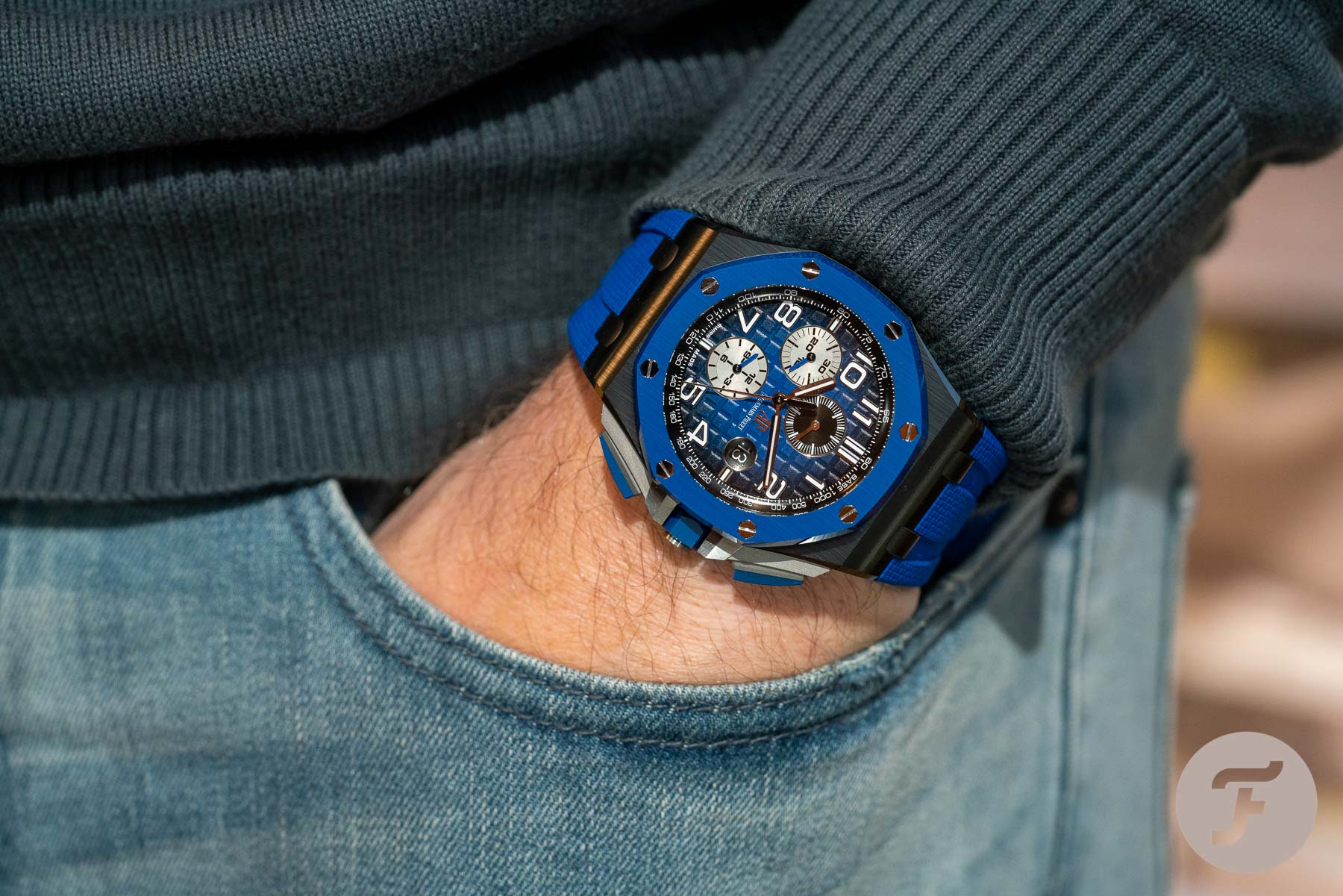 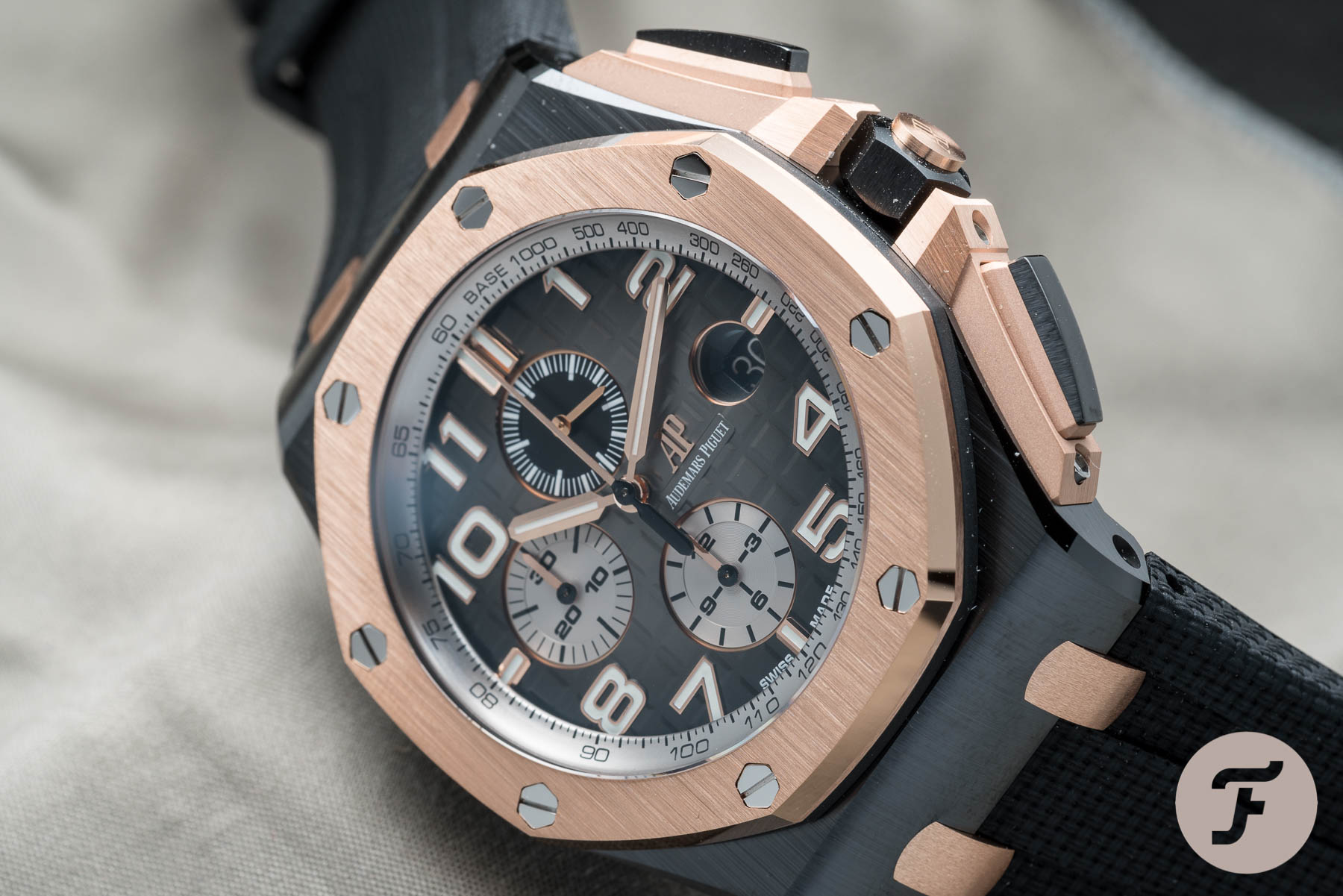 It basically boils down to a preference for colors, and use of materials. When gold is not for you, Audemars Piguet offers a plethora of variations of the Royal Oak Offshore 44mm. Some models in the catalog even include a colorful rubber camouflage strap. As for materials, besides gold, there are variations in steel and ceramic. We have three black ceramic versions for our hands-on review. One in green, one in blue, and one with 18ct pink gold. All have the same 44mm diameter case, which measures 14.4mm in height. 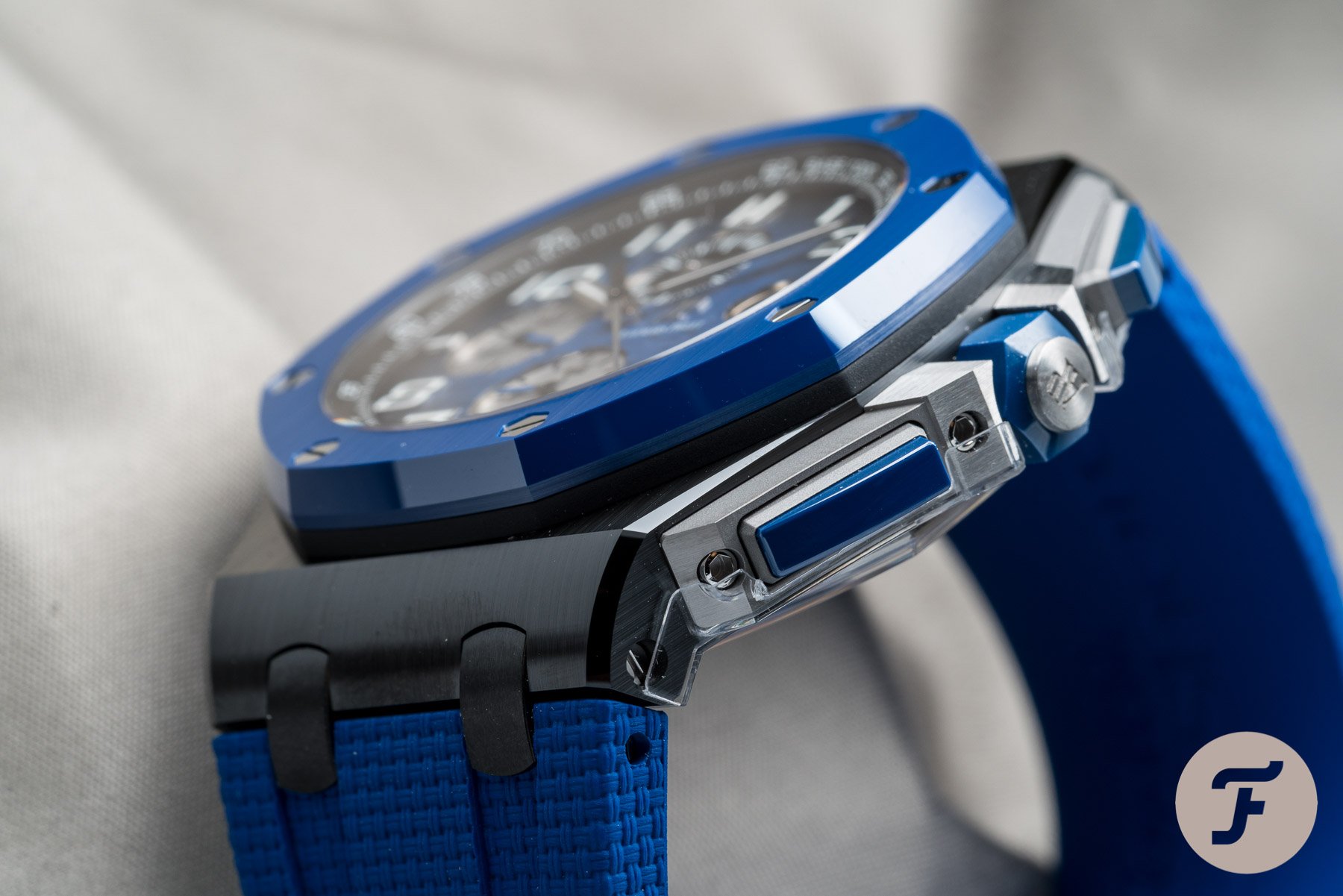 As you can see in the picture above, the Royal Oak Offshore 44mm is quite different from the monobloc case the Royal Oak once was. It consists of multiple layers. A ceramic bezel, rubber seal, ceramic mid-case, titanium push-piece guards, and a titanium case back. And two sapphire crystals, of course. The Royal Oak Offshore 44mm 26405NR has a pink gold case back, with sapphire. All versions have a rubber strap with the textile motif. A stiff looking but rather comfortable strap. 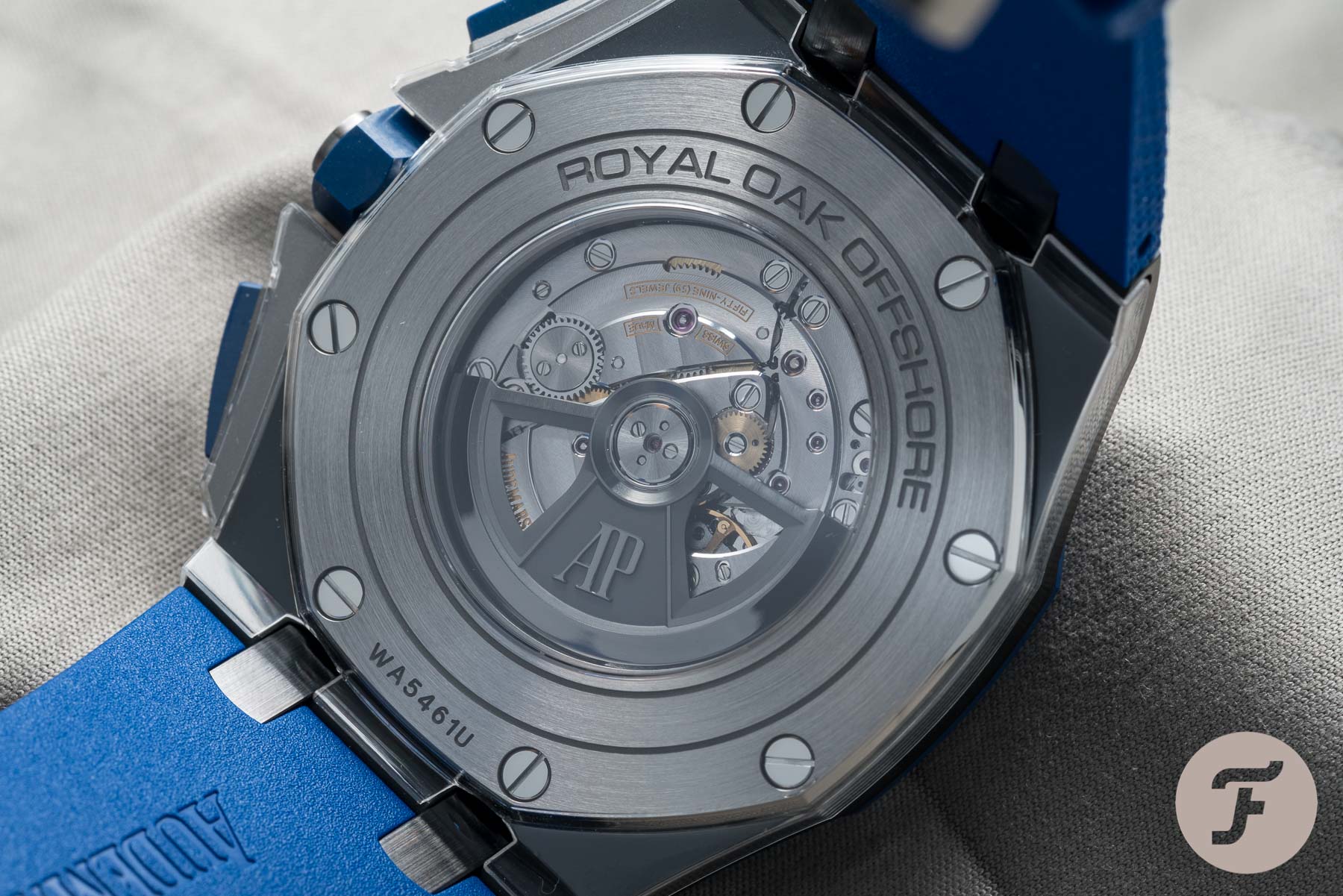 There are two notes I’d like to make. I sound like Captain Obvious here, but AP should really stop using chronograph modules in this price category. I am not sure what is against using their chronograph caliber 4401 movement (also used in the Code 11:59), as it has more power reserve and a higher frequency. And a fly-back function, but that can be taken our (or left in). 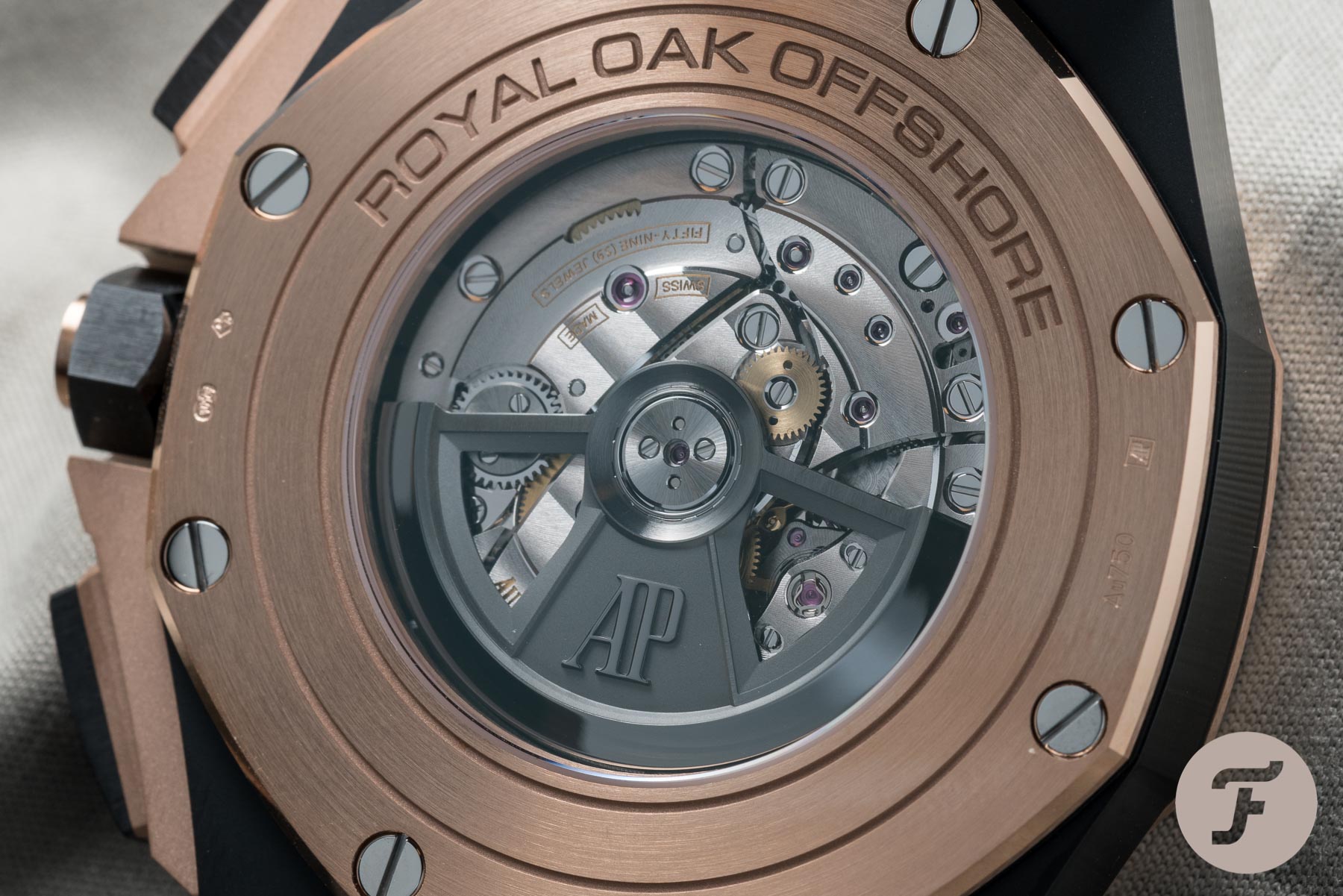 Aesthetically speaking, there are also advantages of caliber 4401. It doesn’t have the date disc in the “basement”, so no need for a cyclops on the date. Also, the 4401 movement has a diameter of 32mm versus 29.92mm of the piggyback movement. A larger movement diameter is more pleasing when looking at the transparent case back of the Royal Oak Offshore 44mm. 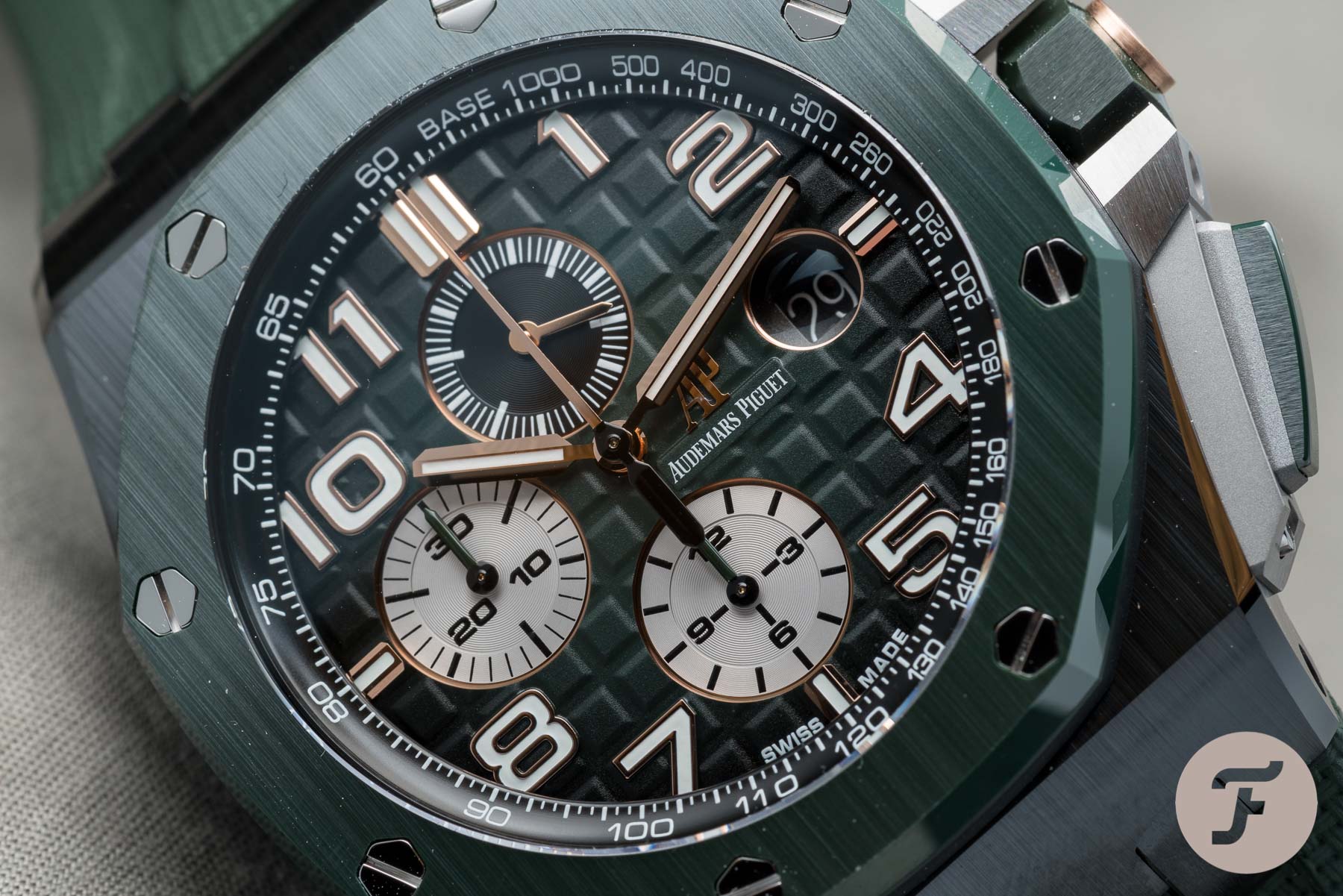 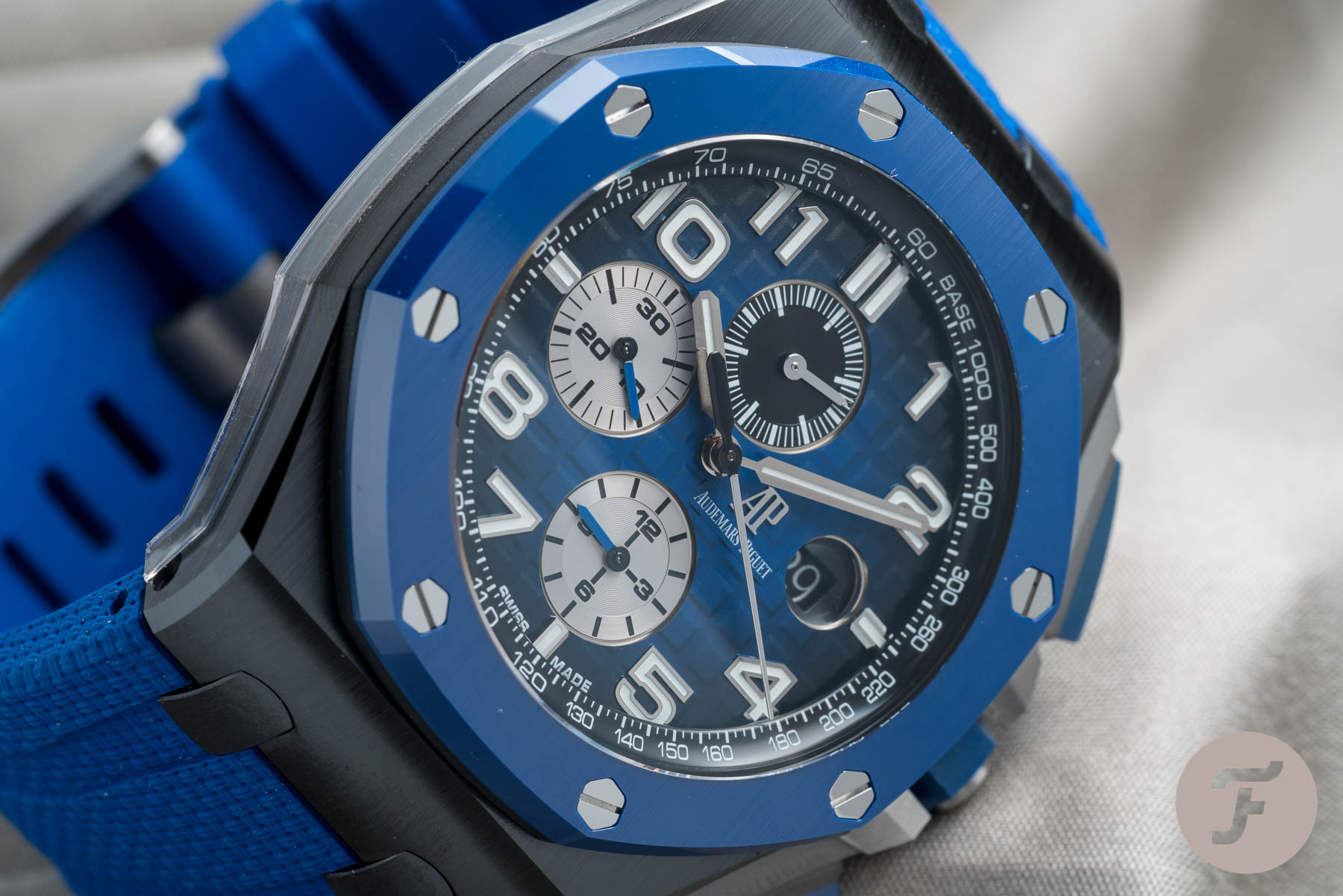 Audemars Piguet refers to the dials as “smokey”. So above, you will see the smokey blue, the others being smokey green and smokey grey. It provides even more depth to the dial, on top of the “mega tapisserie” motif. I am a massive fan of the color blue, but the green and bicolor are my favorite AP Royal Oak Offshore 44mm chronographs. 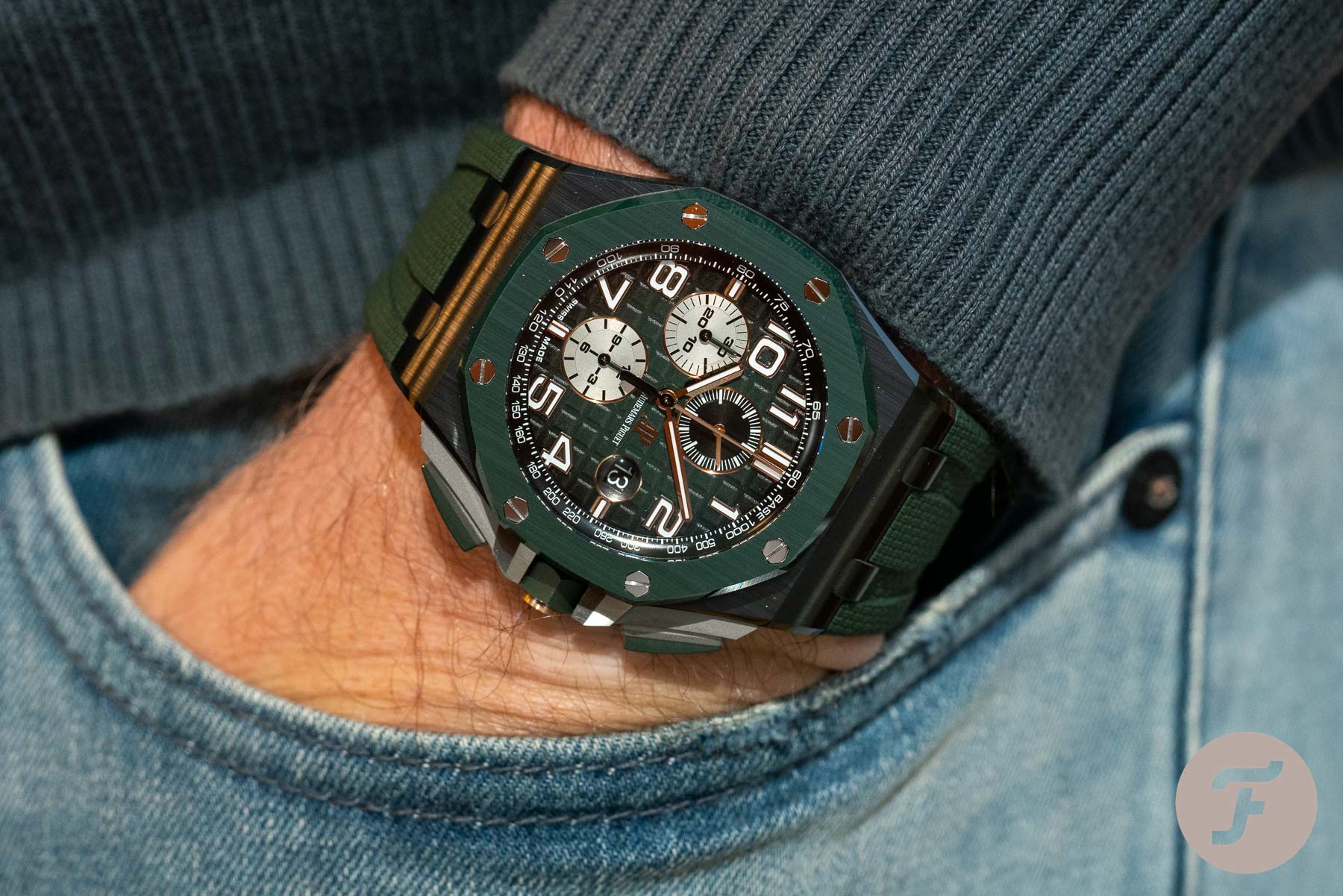 I have 19cm wrists, which I wouldn’t call either small or very large, but 42mm seems to be my sweet spot. That said, I can get away with 44mm as well as you can see. More important though, is whether you feel comfortable wearing a large watch. Even with smaller wrists than mine, I think 44mm can work very well. In the end, it’s about personal preference. In any case, I found myself leaning towards the green watch a lot. I love the color on the ceramic bezel, crown, and pushers combined with the black ceramic case. 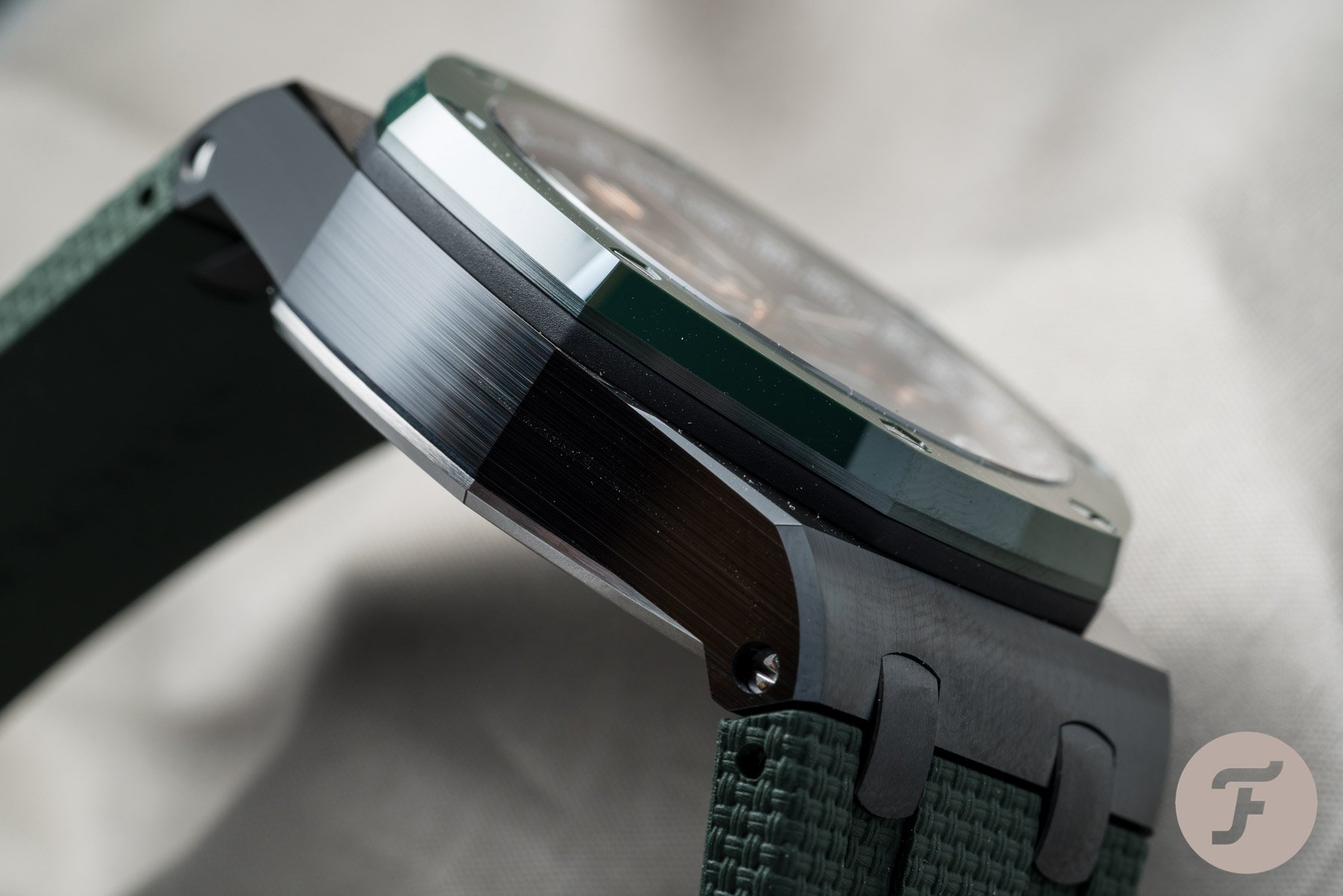 My comment on the piggyback movement is just that, a comment, and wouldn’t be a dealbreaker for me when I’d be in the market for this watch. In my previous professional life (in IT) I would call a dedicated chronograph movement a “nice to have”, and not a “must-have”. This watch is much more about aesthetics and materials than it is about the movement. And that said, the movement does look nice and despite the module not being developed in-house (but by Dubois Depraz), the base caliber is an AP manufacture movement. 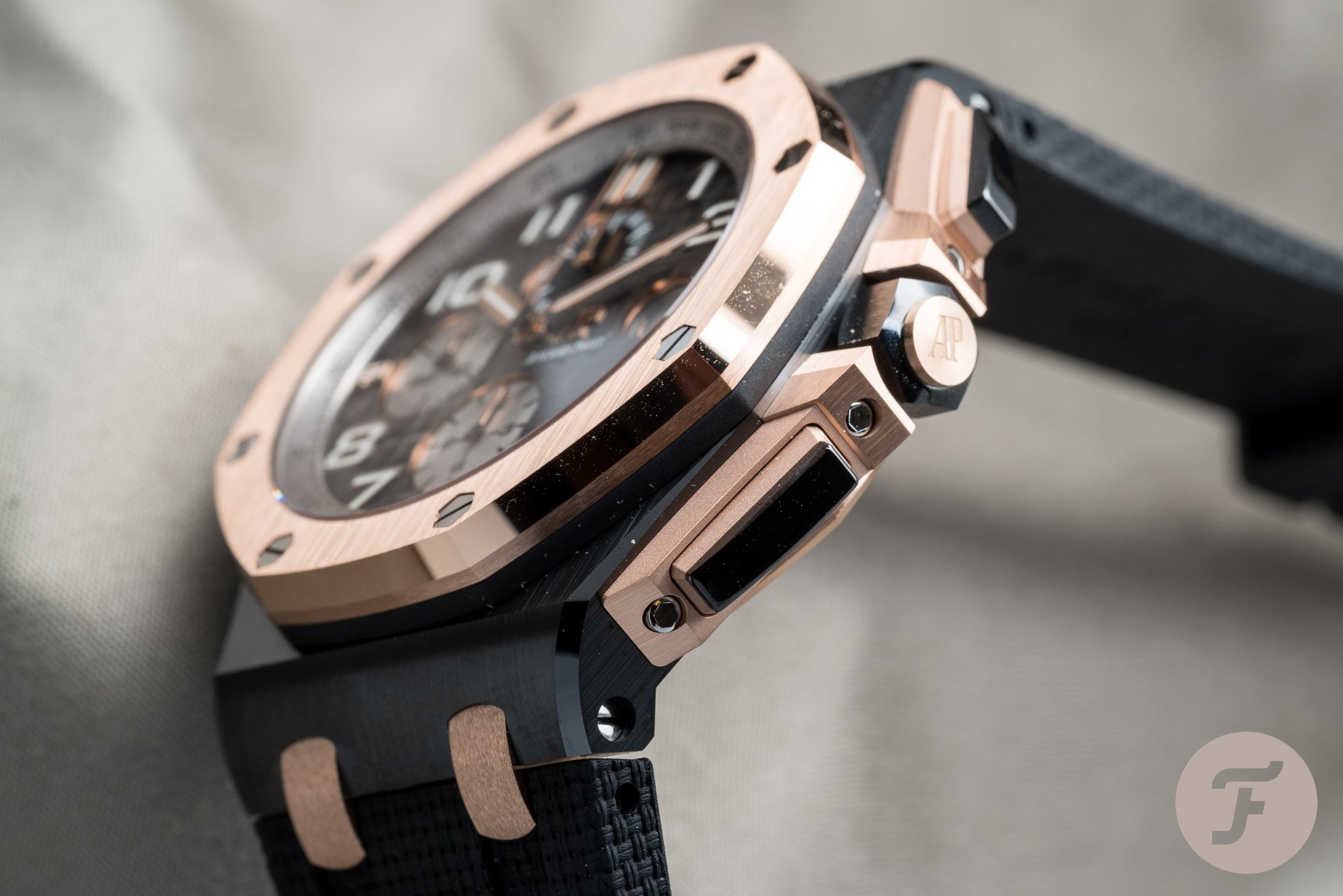 The prices of these Audemars Piguet Royal Oak Offshore 44mm chronographs can be found on the official website. On there, the price are in Swiss Francs though (at least for us). The prices in Euro (including 21% VAT) are:

AP watches come with a five-year international warranty and all specifications can be found below.