In a year where prices finally seem to be stabilizing, I think there will be a ton of attention on the May auctions in Geneva and those that will take place in April in Monaco and Hong Kong as well (after this article is being written). The pandemic resulted in a massive price hike among newer watches, but specifically with some of the smaller independent brands and then the bigger icons like Rolex sports models, Patek Philippe Nautilus, and AP Royal Oak. We’ve also seen Cartier make a big leap in the past years. Meanwhile, in the vintage watch market prices have remained somewhat the same and now appear to again offer better value than their modern counterparts.

For example, when a recently discontinued AP Royal Oak jumbo 15202 in steel trades at similar prices to a far rarer vintage 5402, it makes us question if the market is due for another correction. There is a ton of buzz around the 50th anniversary of the Royal Oak this year, both from the brand, which replaced the 15202 with the 16202 that has an upgraded caliber (finally), and the market as well because so many Royal Oak watches are coming up for auction among almost every auction house, which is either great for the market or, perhaps, not. Phillips has dedicated a thematic auction to the 50th anniversary of the Royal Oak with some of the rarest and most incredible examples we could imagine. It will be yet another fascinating year and we are looking forward to seeing what surprises the market has in store for us.

This Antiquorum watch auction, which takes place over two days, will be held on Saturday, May 7th, and Sunday the 8th in Geneva. It is comprised of 534 lots and has a total estimated value of well over 11 million Swiss Francs at the low estimate. This is the highest value catalog I’ve seen from the auction house in many years. It would be reasonable to assume they will have their highest result of the past year just with the value of the catalog as it stands. It has many highlights and several interesting big-caliber pieces from AP, Rolex, Patek, and Omega. There are also interesting budget watches for all styles and tastes.

For the full catalog of the upcoming Antiquorum Geneva auction, you can click directly here.

I tried to choose some watches that I personally find interesting and not just hype watches, so this will include two pocket watches and is a bit of me just talking about what I find special. 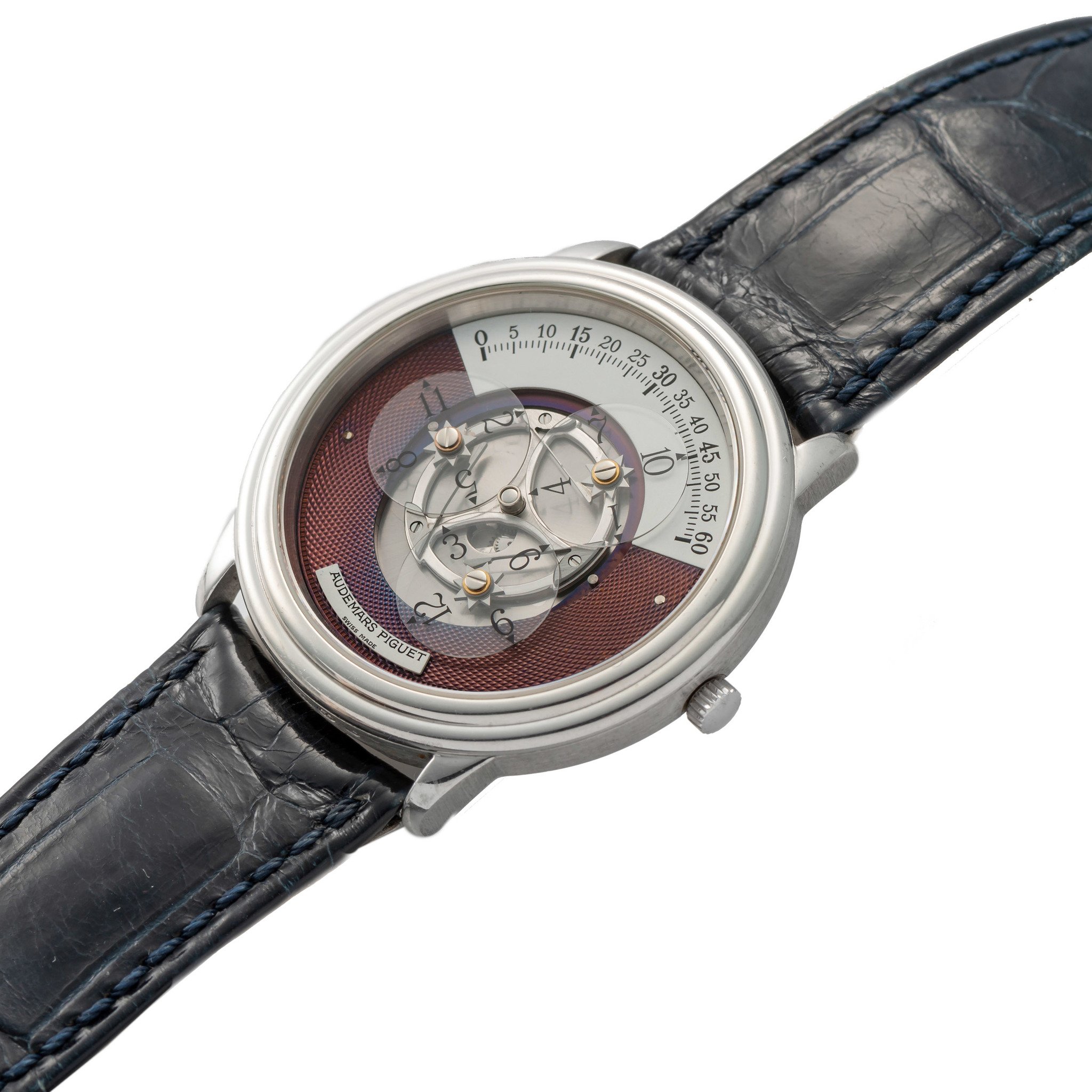 Yes, I chose an AP, but not a Royal Oak. The Star Wheel is an invention that is comprised of 3 transparent hour discs that rotate and use the printed hours to indicate the minutes underneath the clear disc. Those 60 minutes are displayed on a 120-degree white arc at the top and once the hour has passed the 60 minutes, the following hour follows at the beginning. According to Antiquorum lot notes in the previous sale of 1800s Breguet ‘Wandering Hours’ pocket watches by Aimé Janneret- Dubois in the context of Breguet “Etablissement Mixte”, watches with a wandering hour dial first appeared in the 17th century. For more information about these pocket watches with wandering hours see the past Antiquorum sale here. 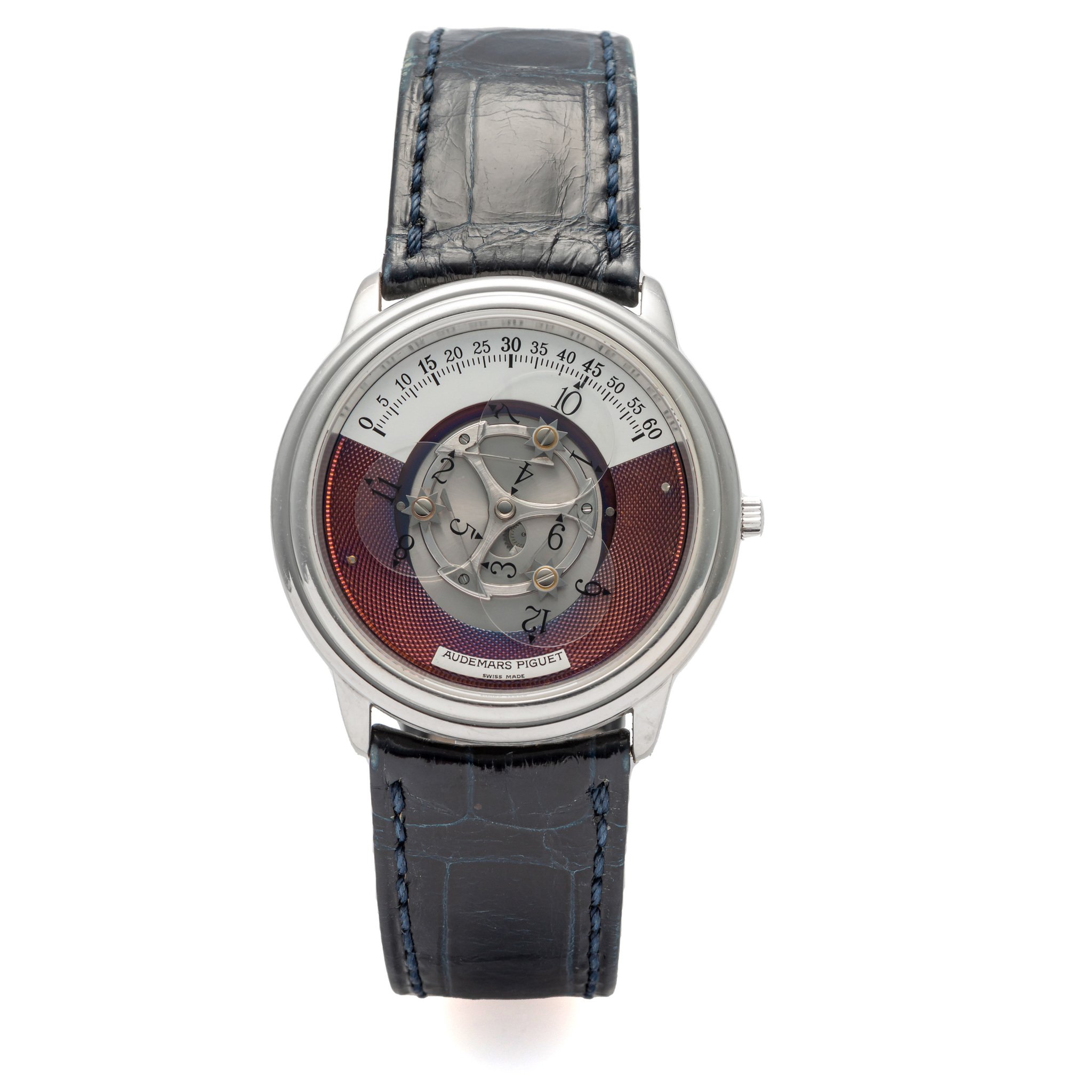 In the past 30 years, the idea has enjoyed a revival, being reduced in size, and introduced into the wristwatch with the use of transparent discs with printed numerals. This invention has also been seen on the FP Journe Vagabondage as well as the basis for the Urwerk brand at its genesis. The Audemars Piguet Star Wheel from the 1990s has been underrated for decades in my opinion and is only now finding its place in the market of passionate collectors of independent watchmakers as a niche collection within the Audemars Piguet collections. This example has a color change to the decorated plate that has changed the hue to a very attractive aubergine color. In addition, this watch is cased in Platinum and less than a handful of these versions have ever surfaced at auction. The estimate is on par with what I would expect its market value is today. 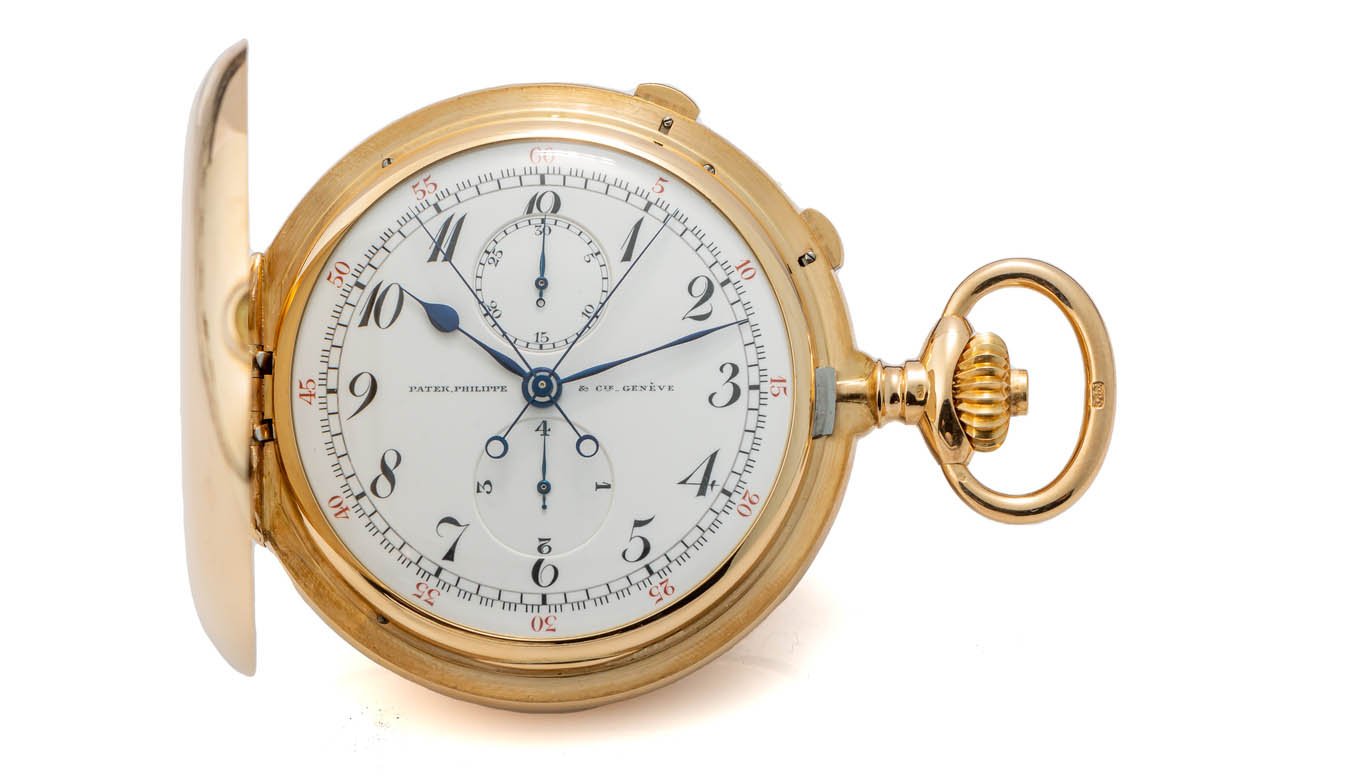 Although I have personally never been a pocket watch collector, I can’t deny that some are just incredible. As beautiful objects or as testaments of complicated watchmaking feats of the past. This piece is from the late 1800s and is estimated to have been crafted between 1892 and 1895. It was made by Patek Philippe according to the invention of William-Alfred Piguet from Le Sentier in the Valée de Joux. Yes, that Piguet and whose brother Victorin founded Victorin Piguet et Freres with him in 1880. It was at a time when Patek Philippe called upon the experts of the valley for their complicated mechanisms to collaborate on extraordinary timepieces. This split foudroyante pocket watch is much earlier and simpler but attests to the successful collaboration. 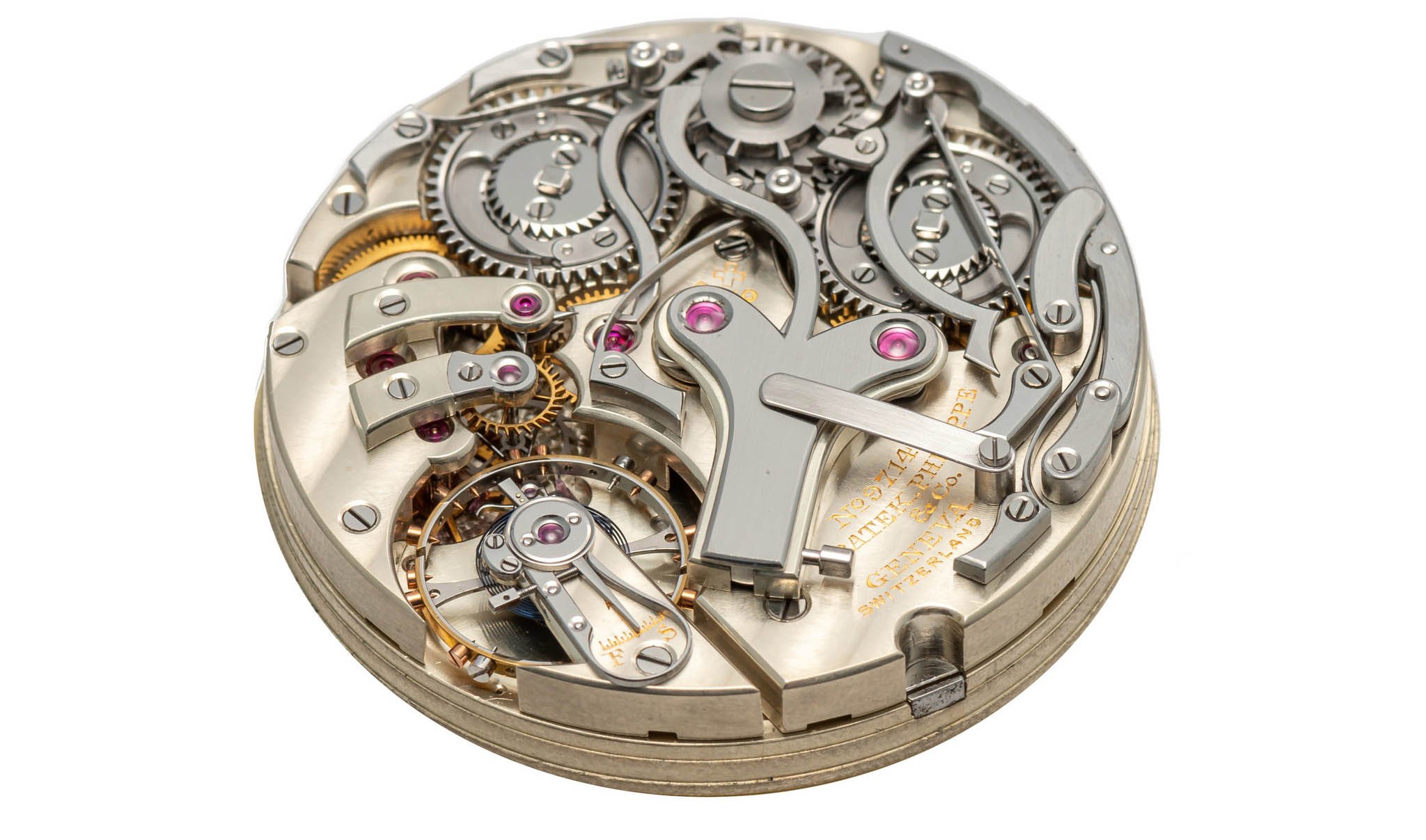 The two barrels with differential gears and bidirectional-winding system were inspired by other inventions as well. The split-seconds mechanism is found on the dial side of the movement and was photographed as well as on the rear. Both sides are equally awe-inspiring. The foudroyante, meaning ¼ of a second, is indicated by the register at 6 o’clock on the dial with numbers 1 through 4 displayed. The split-seconds chronograph is already a work of art but combined with these other features, it’s simply breathtaking. The Antiquorum catalog article is comprehensive and worth a read. A few decades later, Victorin Piguet was the project manager with a team of watchmakers from the Valée de Joux that created the Patek Philippe Henry Graves super complication in the early 1930s. 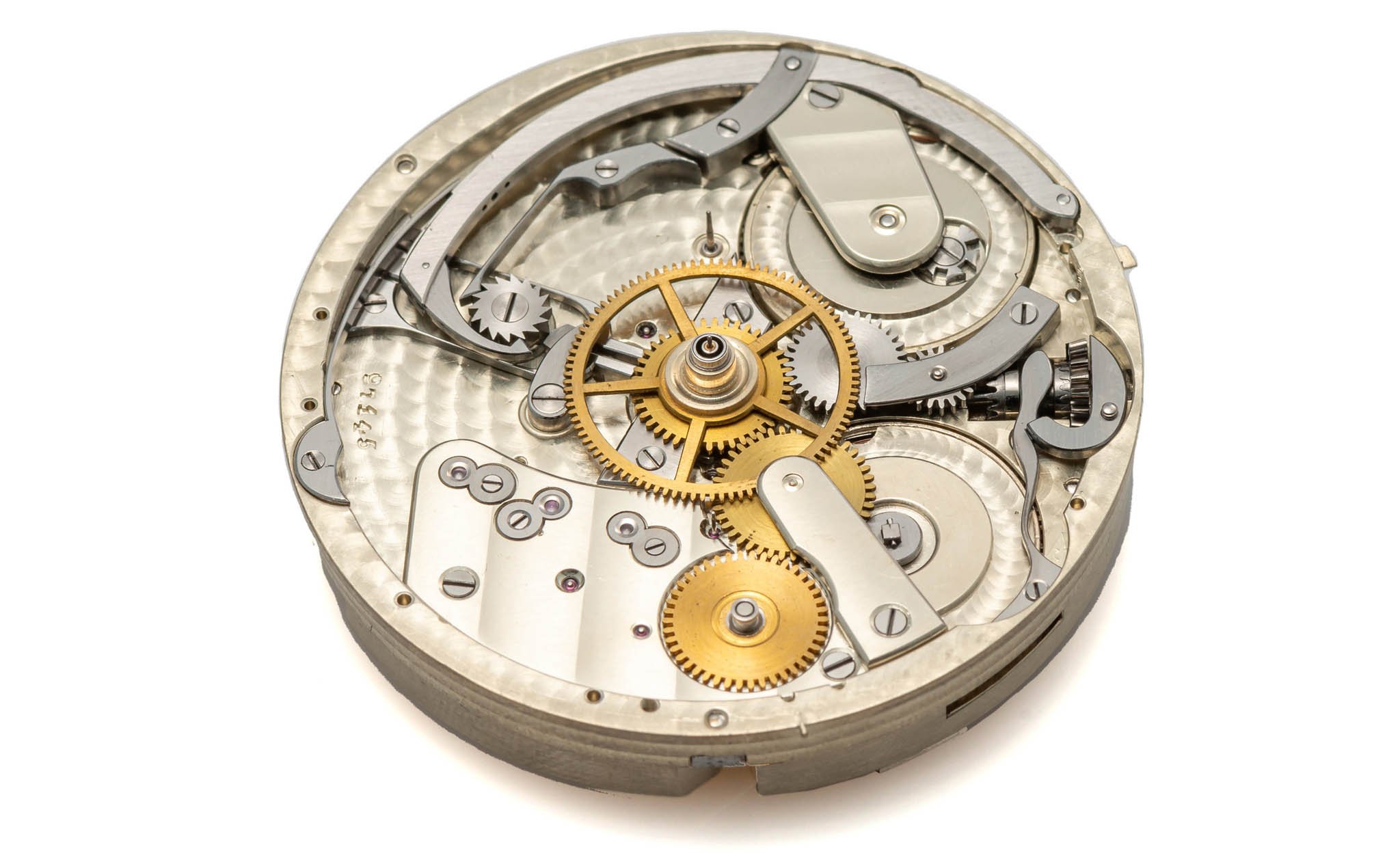 There are only two other examples of this type of Patek Philippe pocket watch known. Both with the same ebauche as this one, both were previously sold by Antiquorum, and both now reside at the Patek Philippe Museum. I think that simple fact should tell you that this is something incredibly special. The first sold in 1987 for about CHF 40,000 and the other in 1999 for about CHF 78,000 and the estimate for this example is very conservative in comparison. 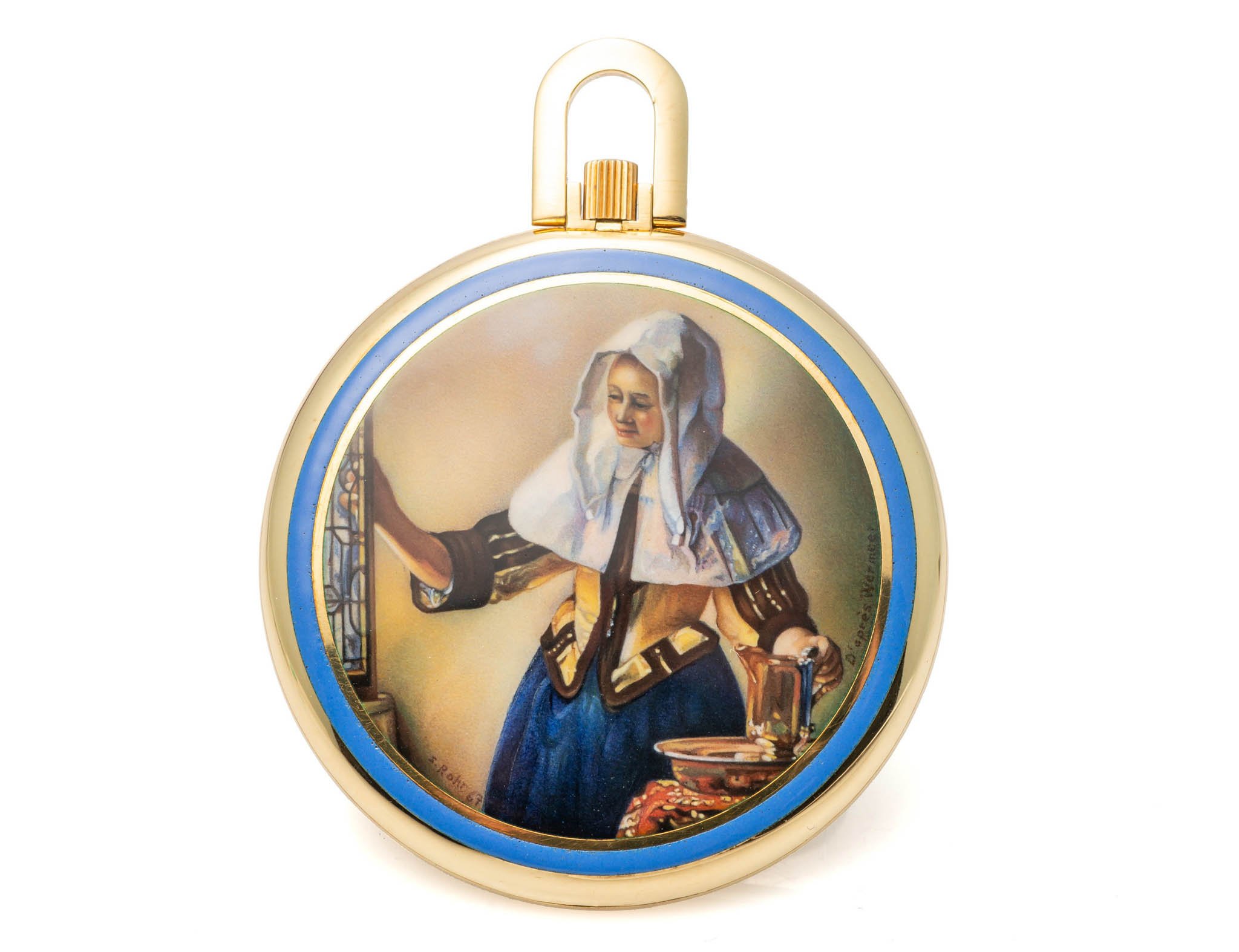 Few rare crafts stand out in Swiss watchmaking history as miniature enamel paintings. Having visited the workshops of several enamellers and seen them apply each brushstroke with a single strand for hours while looking through their microscopes, I have immense respect for their talent. Patek Philippe has always supported the rare handcrafts and worked with some of the best artists and artisans in the industry. Suzanne Rohr is among the most celebrated enamellers and her works are some of the most sought after. She was born in Geneva in 1939 and studied decorative arts until receiving her diploma in 1959. She was independent from 1960 to 1968 and began her collaboration with Patek Philippe in 1967. Most recently, she was awarded the Gaïa award in 2019 for craftsmanship-creation. A fruitful collaboration that lasted close to 50 years and the training of other artists like Anita Porchet, her former protégée also known for working closely with Patek. 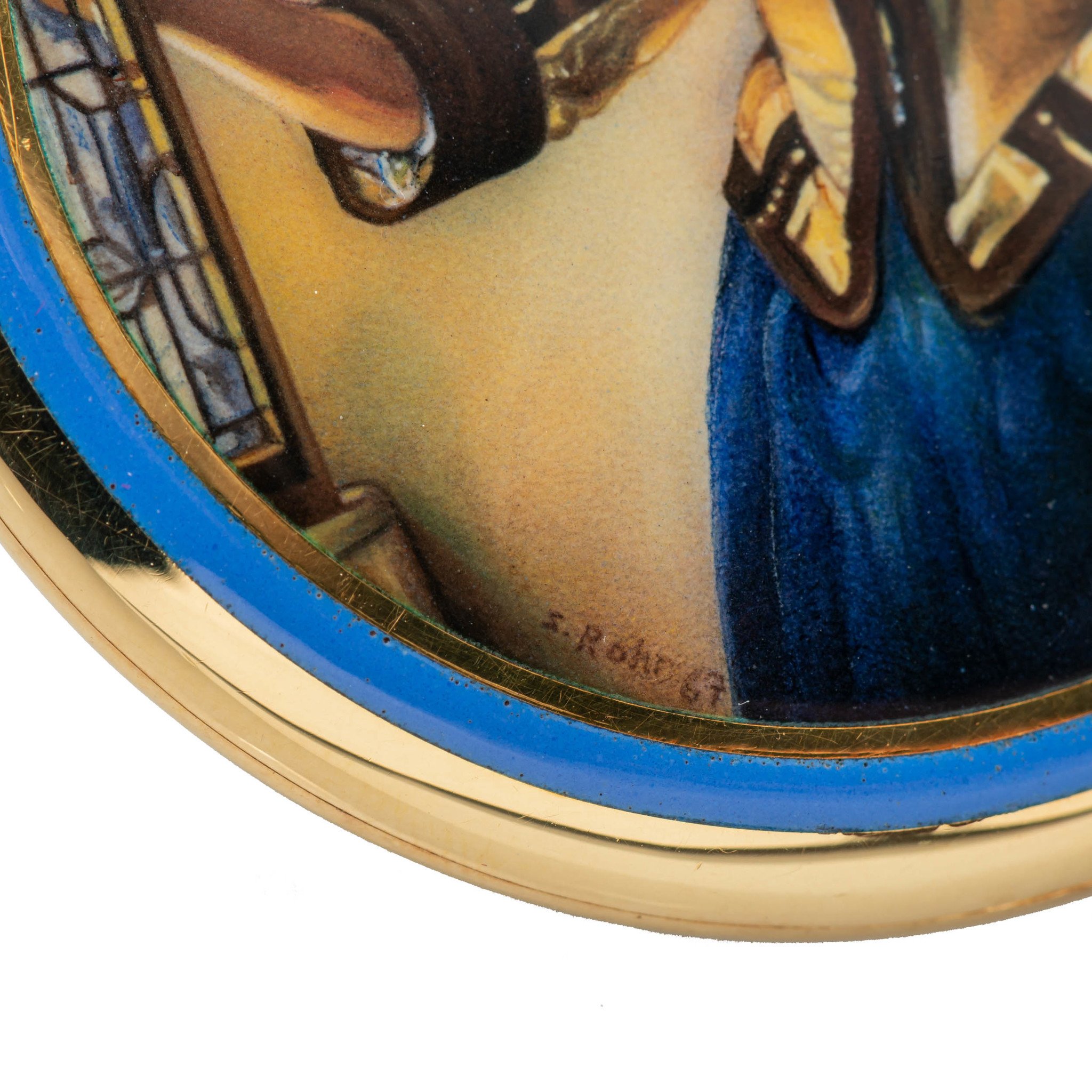 This unique pocket watch was sold in 1989 by Antiquorum in the Art of Patek Philippe sale and has remained in the same collection since. It is Porchet’s recreation of “Woman with a Water Jug” by Vermeer and one of her earliest works for the company. It is signed ‘Rohr 67’ indicating the painting was done in 1967 and according to the information from the 1989 sale, the finished pocket watch was delivered in 1971. There is a blue enamel ring around the painting on this pocket watch, something we did not see again in her later work making this piece furthermore interesting and unique. The condition of this enamel remains one of the best I’ve ever seen and look forward to seeing the result of this one 33 years later. 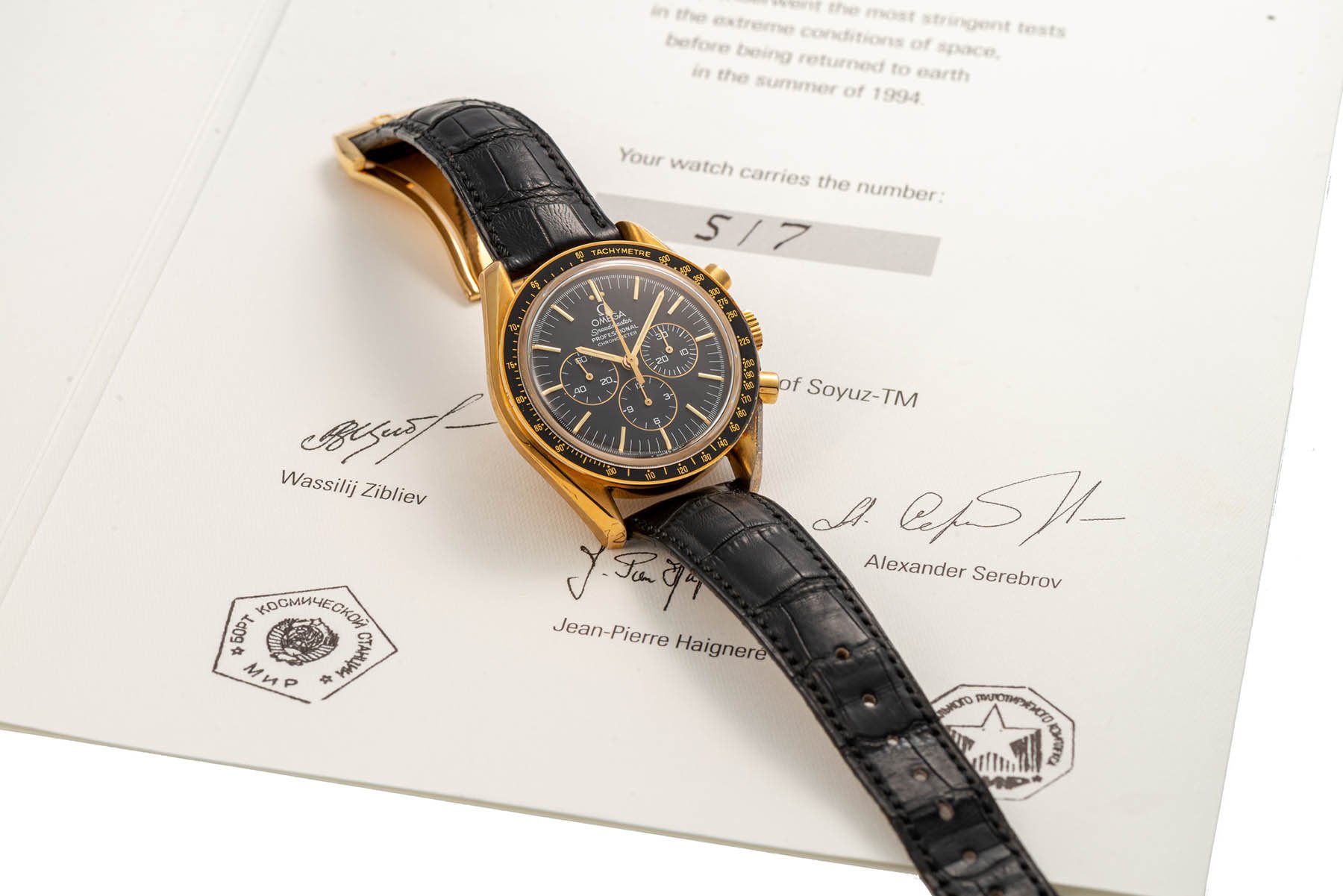 A small batch of 35 Omega Speedmasters (28 in steel and 7 in yellow gold) was flown to space and stayed aboard the MIR space station for 365 days from July 1993 to July 1994. These watches were commercialized in 1995 and sold only to VIPs of Omega at the time. With only 7 examples in yellow gold, 5 on leather (like this one), and 2 on gold bracelets, saying that these seldom come up for sale is an understatement. In addition, the watch was bought new by the owner and kept in a safe until today. The presence of patina on the gold case attests to the unworn condition of the watch on top of the already rare, numbered edition 5/7 and the flown provenance. This watch is also fitted with the special jubilee caliber 864, COSC-rated movement, which is why the dial has an extra line of text mentioning ‘chronometer’ and was reserved for a small batch of gold Speedmasters produced in the early to mid-1990s.

I believe this is one of the most collectible Speedmasters ever made. As far as I could research only 2 have ever appeared at auction and both were sold by Antiquorum. Number 4/7 in 1999 and the number 3/7 at the Omegamania sale in 2007. I have not seen one since then. After 15 years of not seeing one of these on the market, to find one in this condition and complete with the original metal briefcase, warranty, limited certificate, booklet, Moon booklet, VHS tape (don’t know where to play this), and Space Center pen, borders on miraculous. 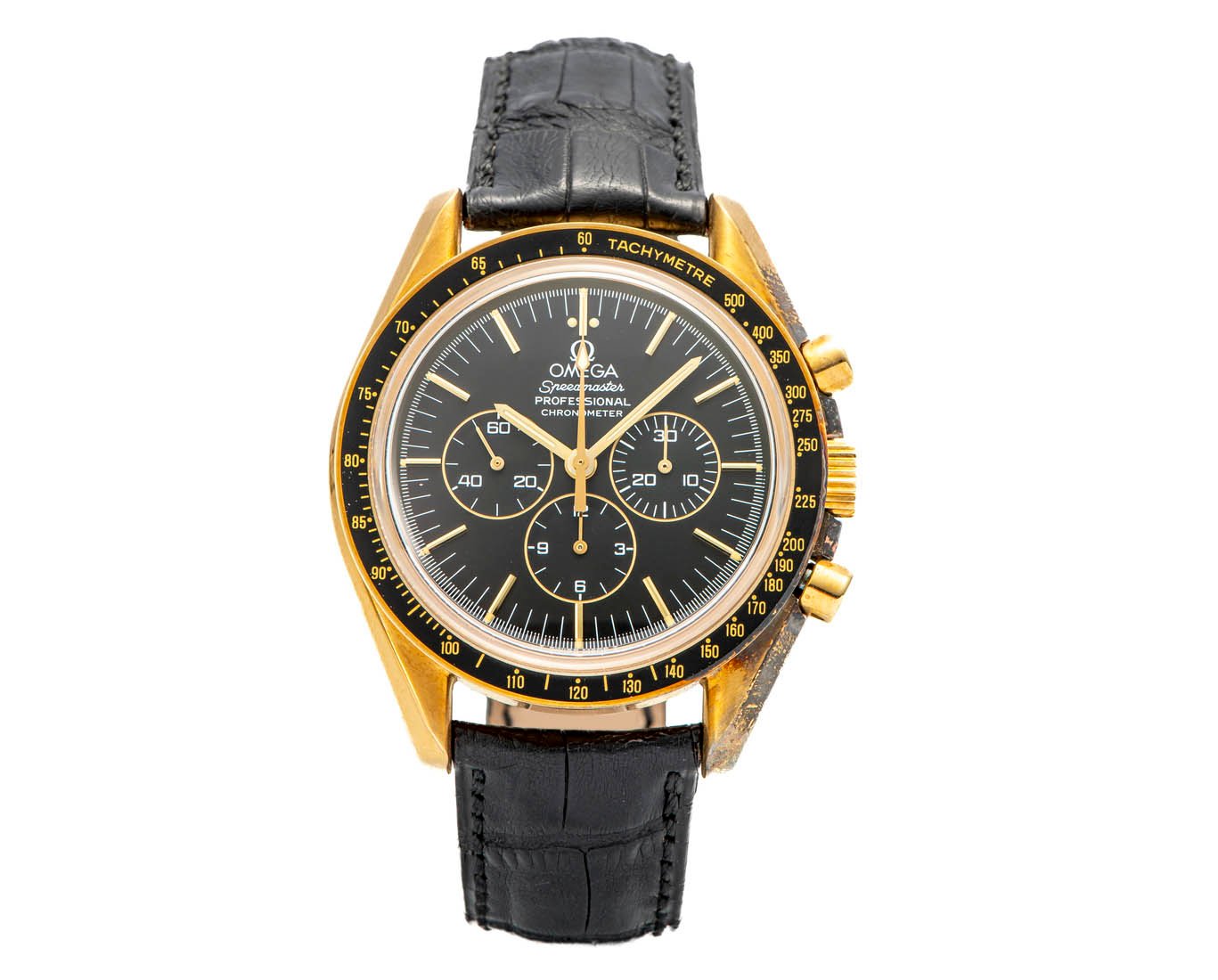 The same collector consigned several new old stock Omegas from the same era and looks forward to strong results across the board. This is a unique opportunity and although I generally feel like I am shooting myself in the foot by talking about watches I would love to own; I don’t think my couch cushions are full enough for me to find the coins to win this one. I have a strong feeling this may end up being the most expensive gold Speedmaster ever to be auctioned. The record for a steel Speedmaster (or any Omega for that matter) stands at CHF3,115,500 (Phillips, Nov 2021, CK 2915-1)… so it may be a while before that record is broken.

NOTE: This article was written in my spare time, and I do not have a vested interest in any of the lots mentioned above. I am not paid by Antiquorum or Fratello Watches. I enjoy writing and am thankful for the opportunity to share my thoughts with those of you who appreciate my articles. That being said, Julien, you owe me a nice lunch.