We travel back to the 1970s and take a look at the wild-looking Seiko 7015-6010 Time Sonar Chronograph. Buckle up and enjoy the ride!

When it comes to vintage Seiko chronographs, most collectors focus heavily on either the 6138 or 6139 pieces. These were the big runners that kicked off everything for Seiko. After all, it was the 6139 that arrived on the scene in 1969 alongside the other automatic chronograph pioneers. However, there’s more to life than these fantastic pieces. Similar to the three-handed watches, it turns out that Seiko’s Daini (second) factory was up to its usual antics. This meant that they were competing with the Suwa factory (the home of those 6138 and 6139 pieces) and creating some highly creative watches. I just so happen to think that the Seiko 7015-6010 Time Sonar happens to be one of the best. 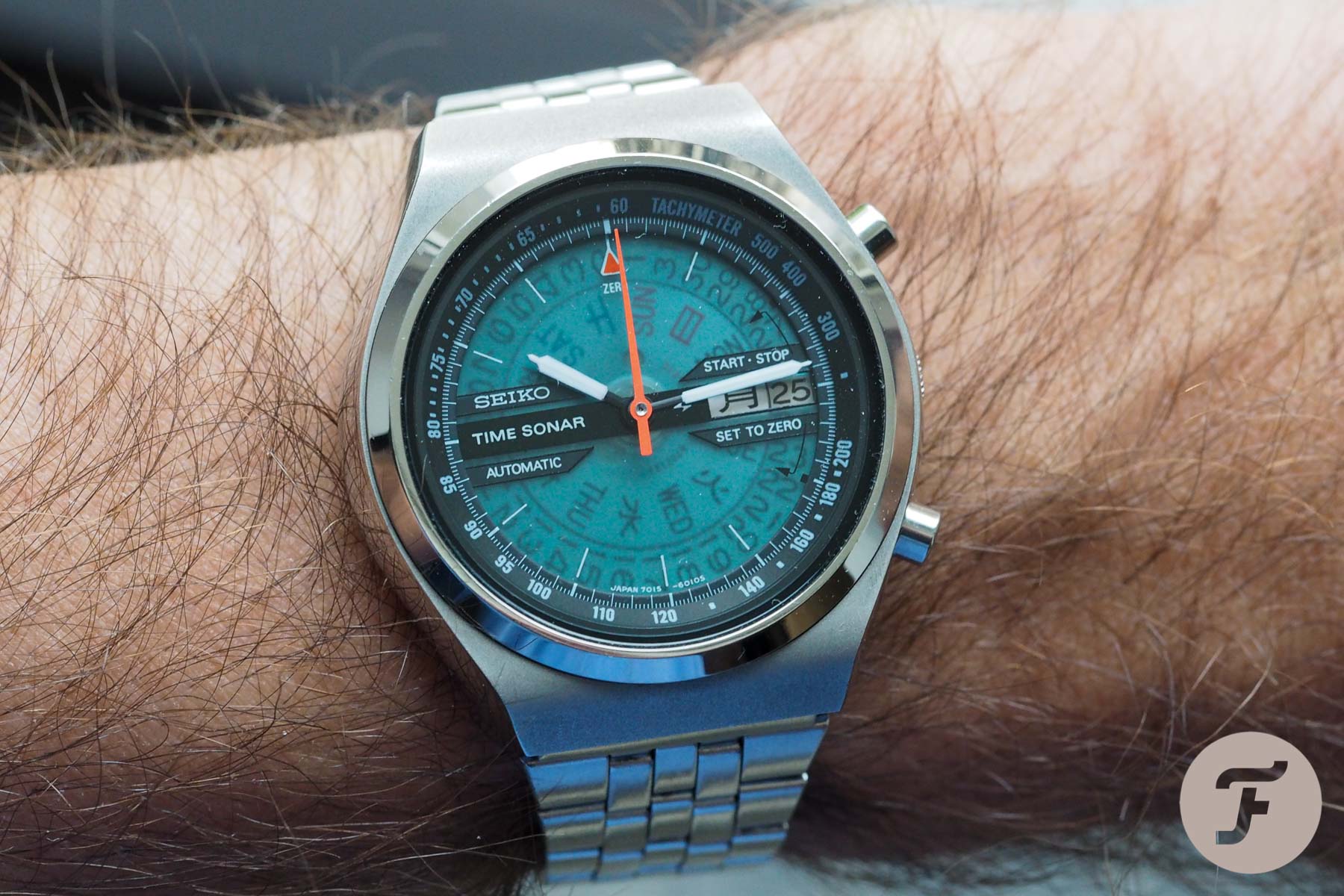 What you see before you today is one of the funkiest looking watches I own. This is the Seiko 7015-6010 Time Sonar Chronograph and it begs conversation. Unlike the many relatively traditional chronographs that poured from the Seiko factories, the Time Sonar feels like a ’70s style acid trip into a space aged future — Japanese style. What you notice first is a relatively busy greenish dial with loads of faint writing that looks a bit “digital”. Upon closer inspection, though, you’re actually viewing both the day and date wheels underneath the dial. What makes it all the more engaging is the fact that there are Japanese kanji alternating with English days of the week. It’s this semi transparent round look that reminds one of a sonar screen, hence the name. 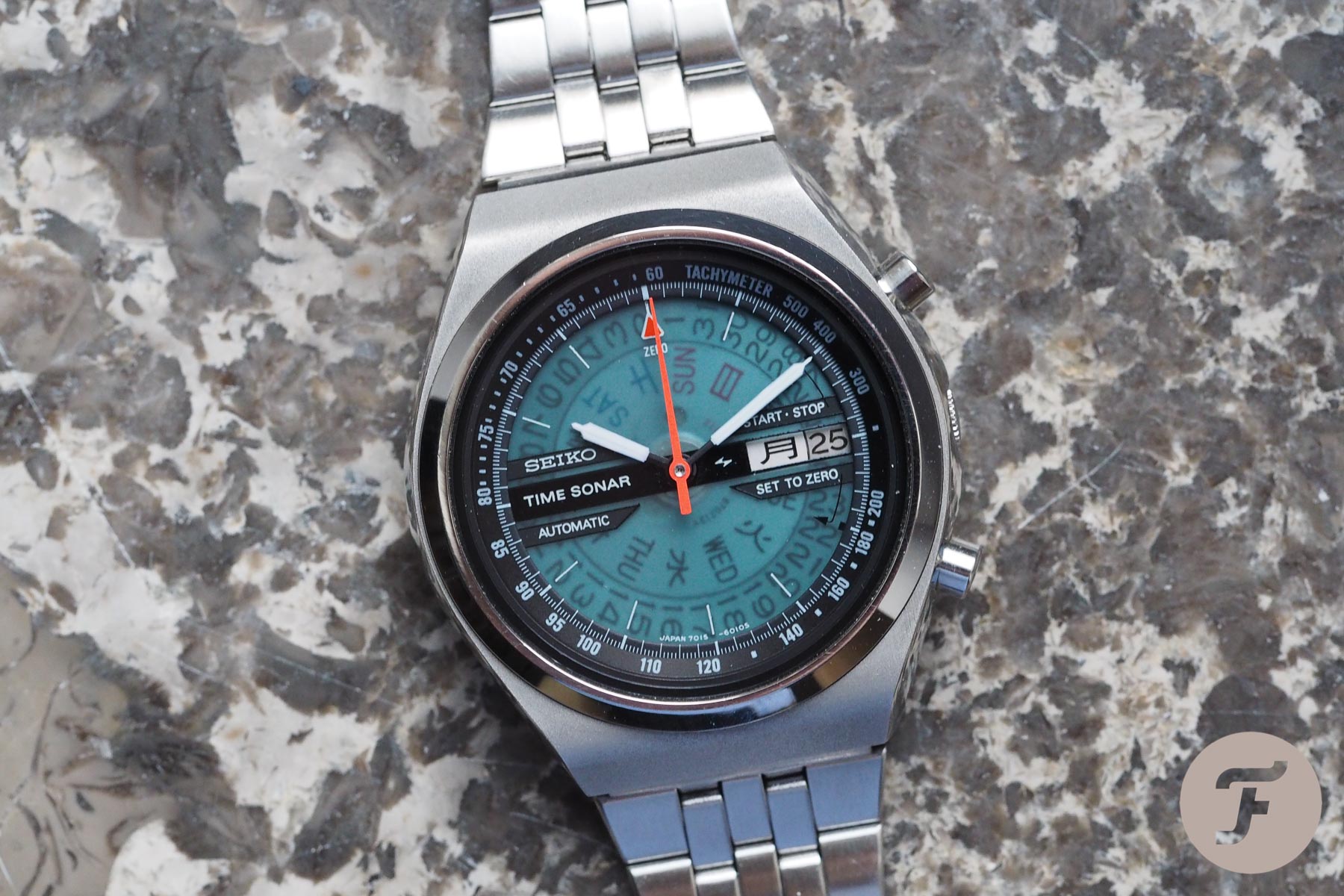 One of the most incredible dials I’ve seen

There’s a lot more to the Time Sonar dial aside from its unique see-through properties. Seiko adeptly practiced restraint here with some delicate white hour slashes that don’t take away from the green section. Ditto on the black outer minute ring with white segments and the black upward sloping tachymeter scale that acts as a tensioner ring. The design work continues at both 3 and 9 o’clock where black segments run the diameter of the dial. It’s here that we see branding, the model name, day/date window, and some pusher instructions much like a modern G-Shock. White hands with “floating” black centers and a bright orange chronograph hand matches a corresponding triangle at 12:00. Just take this watch in for a moment, think about all the details, and ask yourself if you could do a better job of composing such an epic final product. 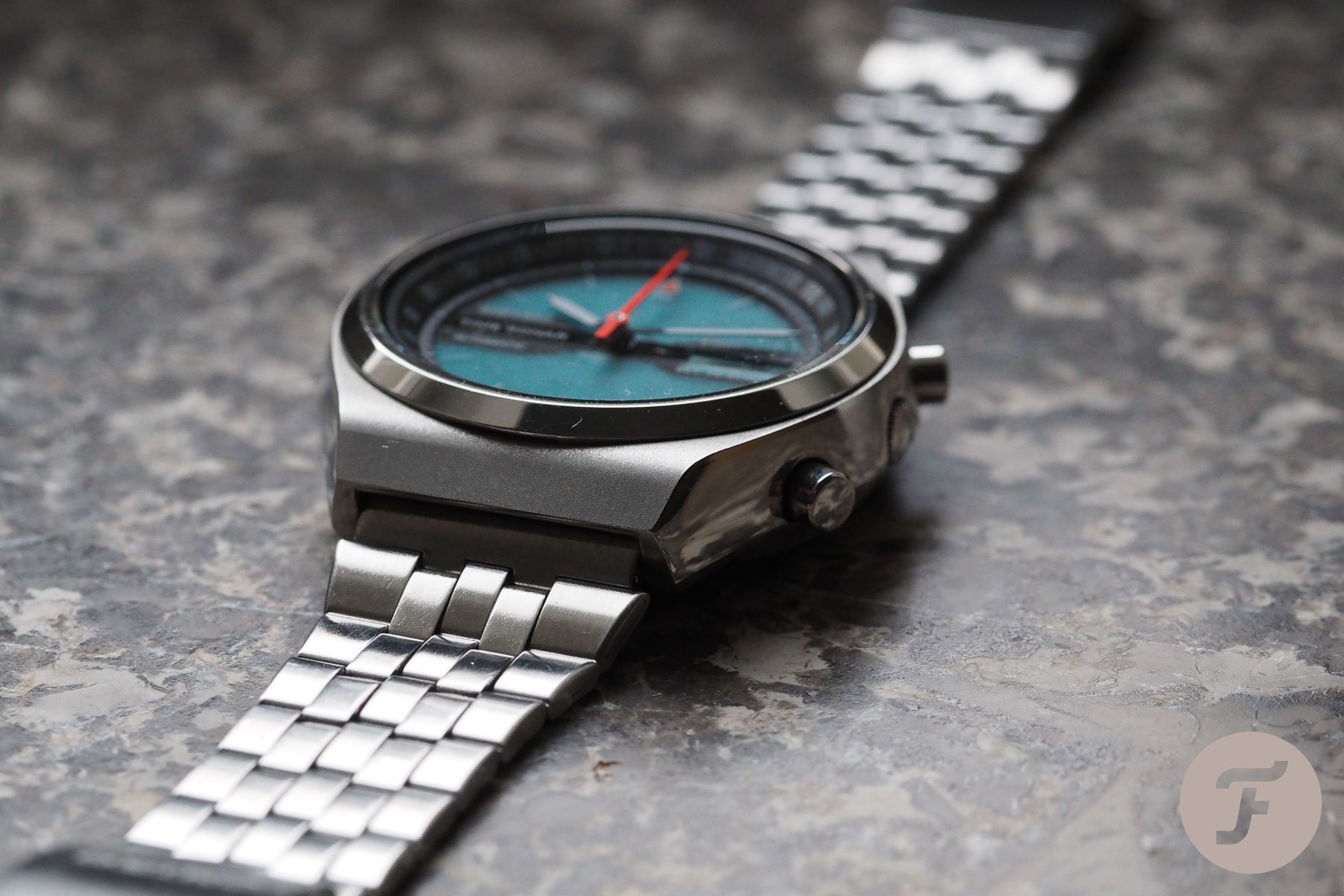 The futuristic dial on the Time Sonar certainly looks the part and, thankfully, the Daini folks kept pace on the rest of the watch. A flat mineral glass tops things off and is surrounded by an angled and polished bezel. This bezel contrasts perfectly with the bead-blasted top of the case. I’m generally no fan of lugless designs, but this 39mm steel case fits the personality of this watch so well due to its stark simplicity. The case looks great with its polished flanks, but it’s certainly not the star of the show here. Likewise, I appreciate the flush crown and simple polished round pushers that extend from the case. 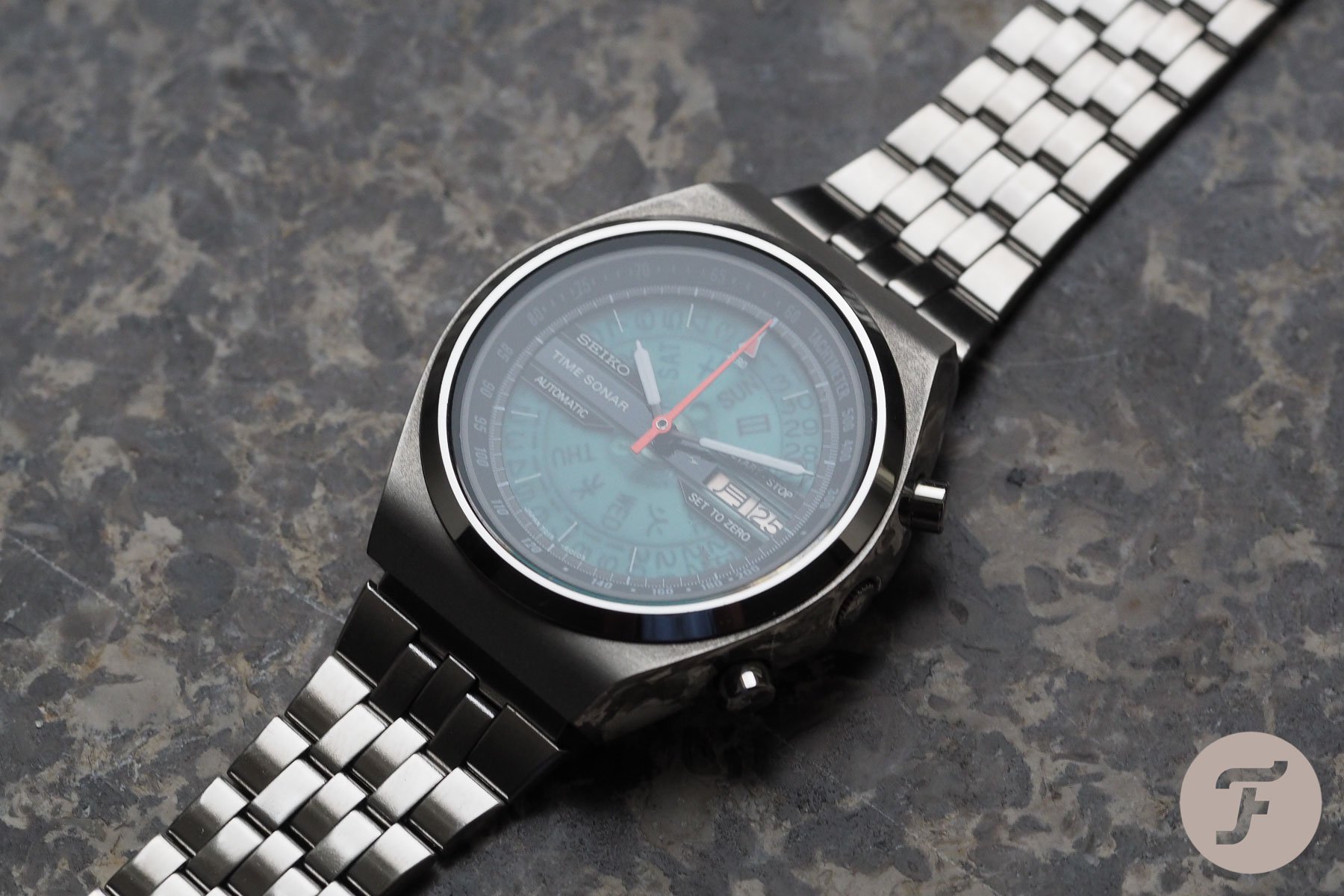 A very different kind of movement

Since the Time Sonar is a chronograph, you’ve undoubtedly noticed that it lacks sub-registers. This watch is a simple one minute counter, but it’s not that simple. The upper pusher starts and stops the movement while the lower pusher returns the hand to 12:00. But there’s more because this is a flyback movement and that means that it can be reset while running. It’s a neat feature on this 21-jewel cam operated 7015 caliber automatic. This movement doesn’t allow for hand winding, but the crown offers day changes with a push and date changes by pulling it out to the first position. 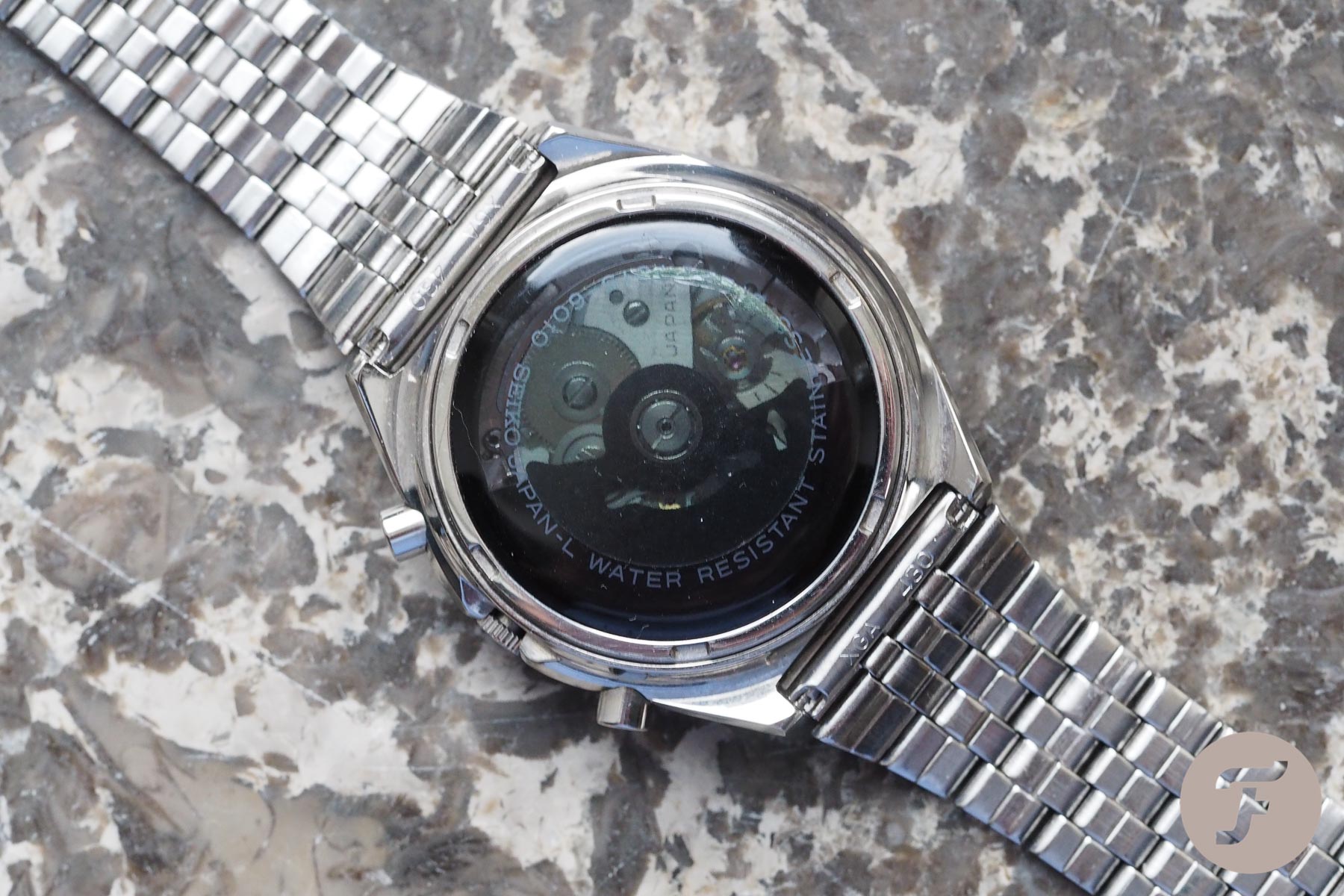 And a bit of show and tell

If you’re enjoying the ride so far, the Seiko Time Sonar has one more trick up its sleeve. Flipping the watch over reveals a smoky screw-in case back. In what must have been one heck of a surprise during the mid-’70s, this is the first Seiko chronograph with a display back. Seiko used some sort of plastic for the display and printed the model number and serial on this material. Therefore, most serial numbers (including mine) are now long gone. You can see the movement and its black-coated rotor. In my view, it’s details like the case back and rotor that make this watch such an amazingly different piece in a sea of other chronographs from the era. 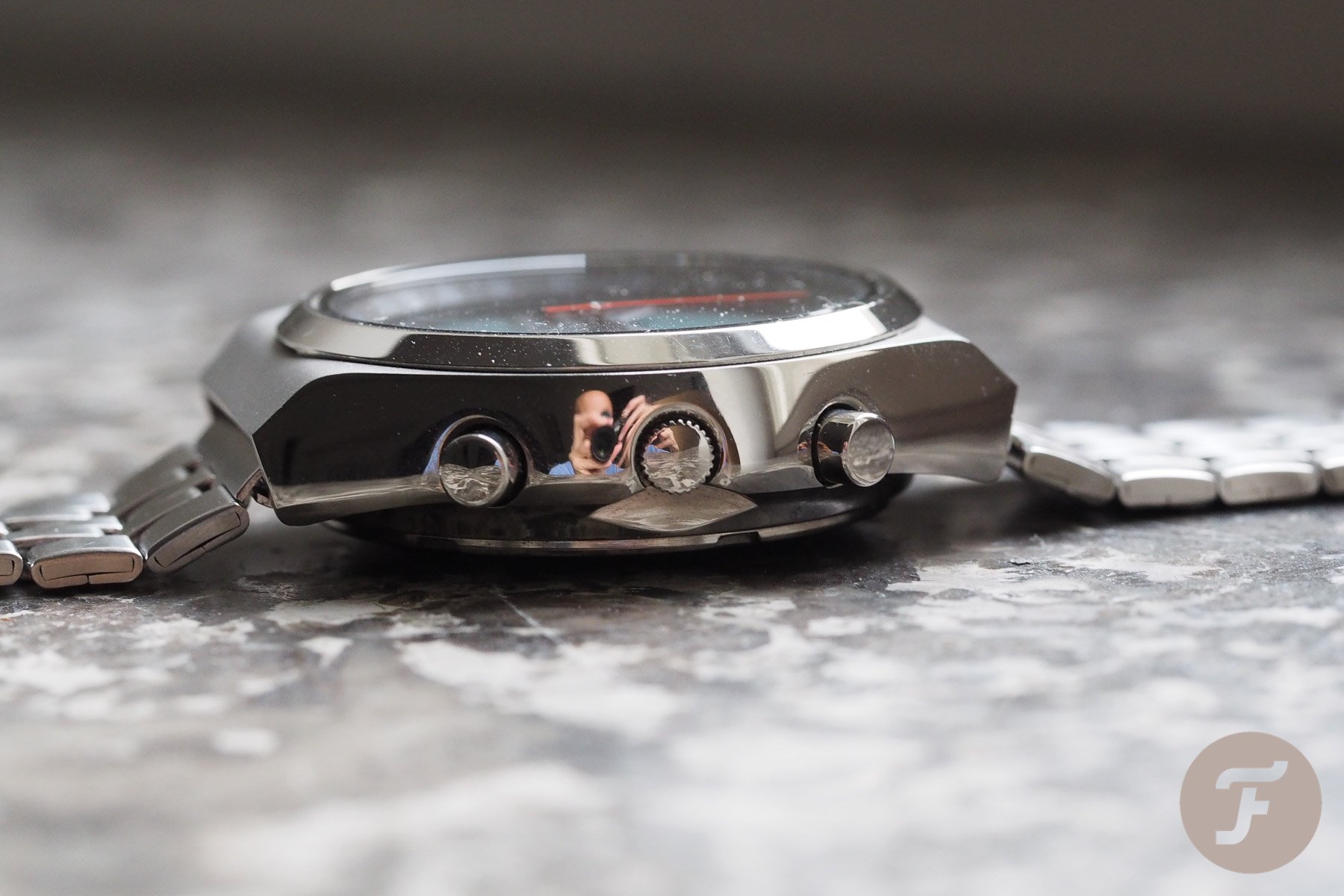 The Time Sonar shipped on a couple of different bracelets. The well known “fish bone” was around and this 19mm “Jubilee” style that you see here. It’s honestly one of the better bracelets from Seiko and gets along well with my wrist hair. The clasp features micro-adjustment pin holes and link removal is achieved by sliding out little hooks that connect the small center links. Once again, I think that Seiko chose the design well to match, but not overpower, the dial. 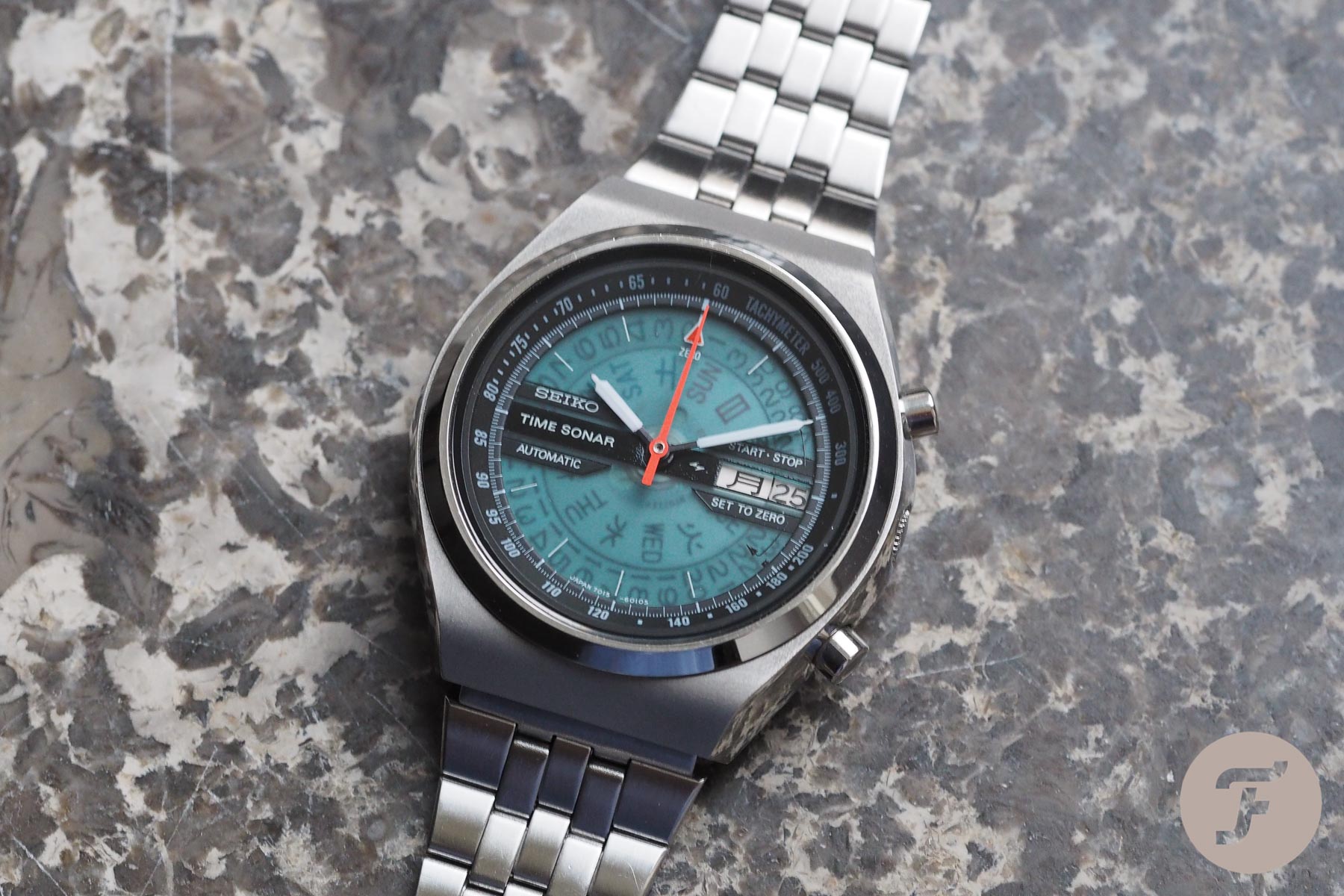 The Seiko Time Sonar debuted sometime in the first half of the 1970s and was made for several years. I’ve done plenty of looking and cannot seem to find exact dates. There were several variants including a 7015-6010 model with a semi-transparent brown dial and an altogether different 7018-6000 with black dial and sub-register to name just a couple. A time-only 2260-0690 reference existed with a display back as well. The Time Sonar I’ve written about is relatively tough to come by and desirable to Seiko collectors. The movements can be a bit tricky to service as these were mostly JDM pieces and not as prevalent. Additionally, I’ve seen several examples with cracked case backs. Values are all over but can head to the $1,000 mark at times.

The vintage Seiko Time Sonar 7015-6010 is one of the most unique watches in my collection. It’s absolutely different from anything Seiko was making at the time and they’ve never done anything quite like it since (although Dave asked for its return in a recent article). On top of it all, they happened to make a very charming looking watch indeed.

Hot Topics
Laventure Automobile Chronograph With A Proprietary Movement — Marking A Huge Leap Forward For One Of The Industry’s Most Promising Brands
155 comments
Fratello Exclusive: An Inside Look At The MoonSwatch Production Facilities
75 comments
Selling Your Watch To A Dealer Or Trading It In — Tips From A Former Watch Dealer
49 comments
Summer Splash — Round 2 : Jorg’s Tudor Pelagos FXD Vs. Lex’s Hublot Big Bang Integral Ceramic Sky Blue
47 comments
We Talk To Swatch Group CEO Nick Hayek About The MoonSwatch
44 comments
Popular
Hands-On With The Seiko Prospex Dawn Grey Series
Robert-Jan Broer
9
You Asked Us: Tissot Powermatic 80 Seastar 1000 or Longines HydroConquest
Robert-Jan Broer
17
Hands-On With the Seiko Prospex SRPC91K1 – Save The Ocean
Robert-Jan Broer
15