As an admitted Seiko nut, I’ve always had a hard time with the brand’s release strategy at Baselworld. Sure, they release the new Grand Seiko pieces and cover the Astron line, but hardcore devotees of the brand are usually left wanting when it comes to the sports-related pieces: especially Prospex. Well, I am here to tell you that while Seiko did not bring everything Prospex-related to Basel, they are taking steps forward to offer a more global product line. Recently, participants in Seiko forums have seen grainy catalog pictures showing a variety of new professional pieces and while we won’t get all of these globally, we will see some. Also, stay tuned as Fratellowatches will fill in more details over the coming days regarding Seiko’s new releases, but today, I will briefly cover 2 of the more highly awaited pieces from the Seiko Marinemaster line.

First, I’ll share a few words on my experience with Seiko at Basel. I attended the Seiko press conference, which featured the leads for each major product line as well as Hattori-san, Seiko’s CEO. The press conference was brief, to the point, and most interestingly, humorous. A lot of fantastic jokes were made during the presentation and the leader for the Prospex line even inhaled helium from a balloon to help illustrate the reason for not using helium valves on their Prospex line of watches. He was very clear that Seiko simply does not wish to allow any helium into their watches. It was funny, lighthearted and, to me, shows that Seiko is finally wishing to appeal to a larger audience with its marketing strategy. Now, let’s talk about the watches. 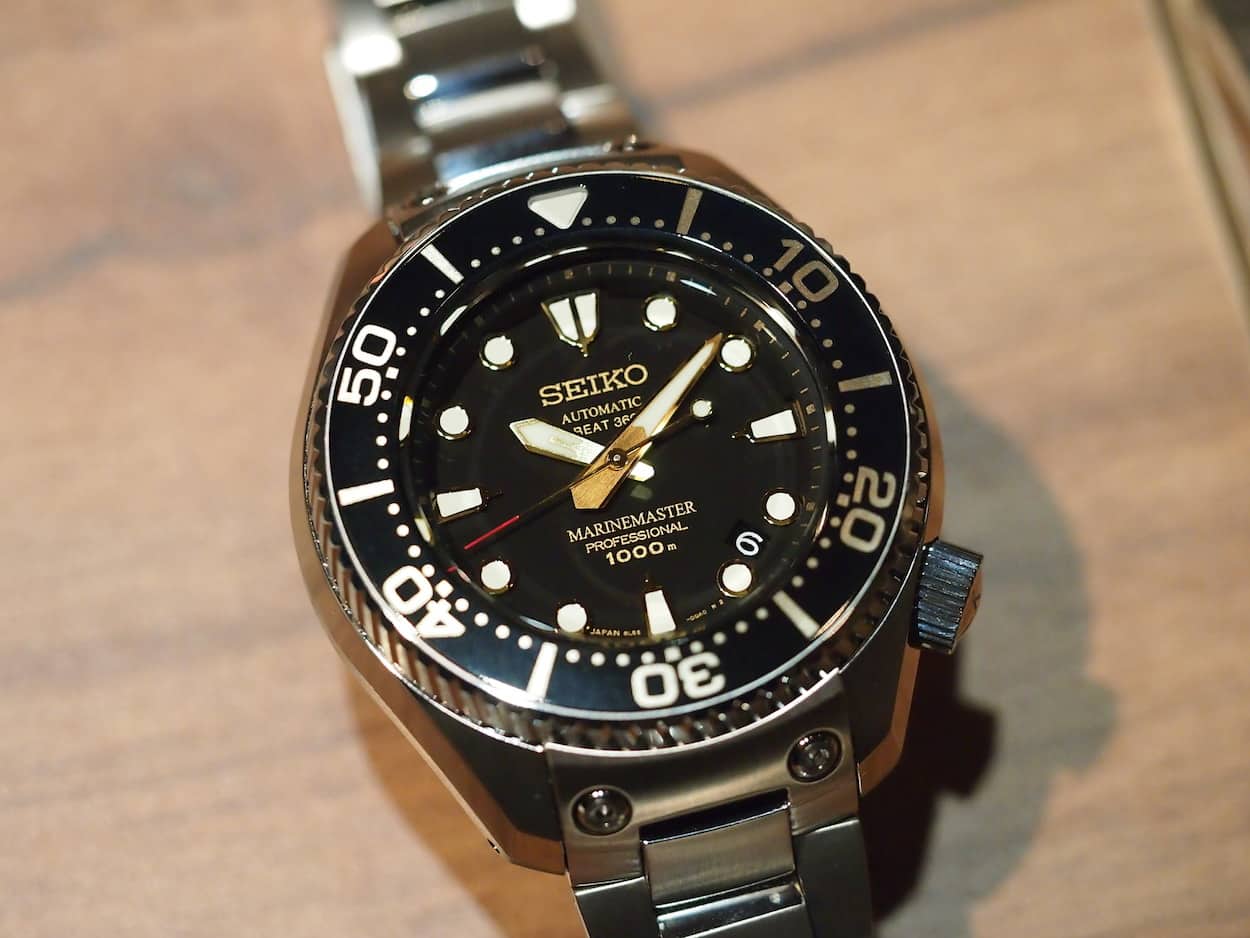 Seiko made reference to the fact that 2015 is the 50th anniversary of its first professional diver’s watch, the 62MAS and in true Seiko fashion, they’ve rolled out a limited edition model. The piece, which is named above, carries the catalog number of SBEX001. It’s a 48.2mm diameter, 19.7mm thick titanium cased monobloc model on bracelet, which is also delivered with a silicone strap. The watch is equipped with a new 36,000 bph, 37-jewel 8L55 automatic movement with 55 hours of power reserve and is assembled in Seiko’s Shizuku-ishi Watch studio, which also builds movements for Grand Seiko. An anti-reflective sapphire crystal comes with the watch as well. The watch is water resistant to 1,000 meters and will be made in a limited edition of 700 pieces. Inspiration, by the way, is taken from the high-beat 6159 diver of 1968. Pricing will be approximately 6400 Euros. 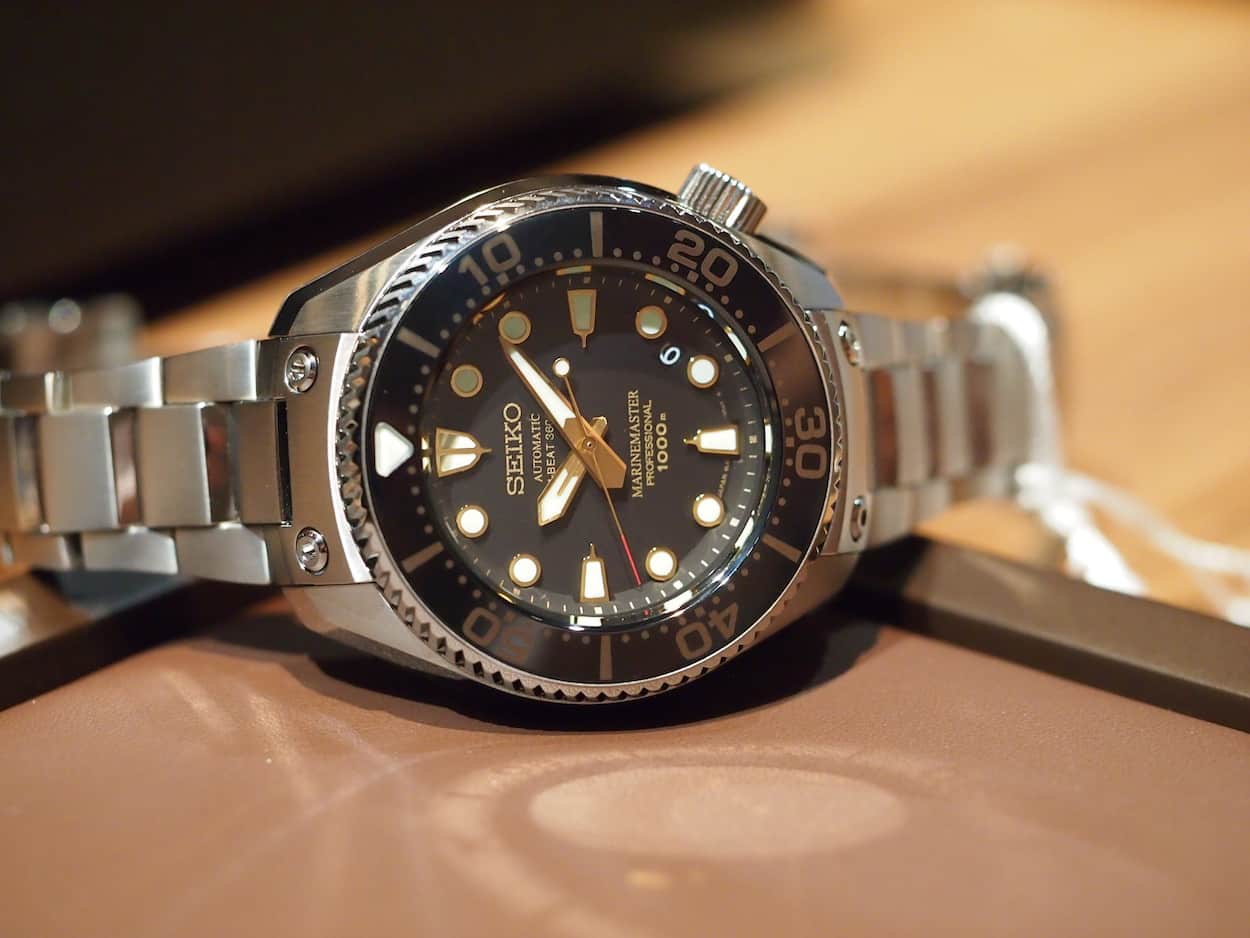 My thoughts: I have to admit that I was skeptical when I first started to see bad scanned photos of this watch within forums. I was concerned about the odd Allen screws on the bracelet and the overall size of the watch. However, I can tell you that the Allen screws aren’t intrusive in person and that’s likely because the physical mass of this watch “drowns out” the effect of these screws. By the way, I think that’s a good thing. The size of the case is also a bit intimidating and while I would have liked smaller, it hugs the wrist nicely and fits better than its size would suggest. Plus, the watch should look great on the provided strap. Regarding the dial and bezel, the quality is sublime: it should be for the price. Dial details are perfectly carried out as one would expect and not unlike the quality of the limited edition Spring Drive Tuna that I own. The other great news is that this movement is a debut for Seiko and was specially created as a high-beat and to withstand the rigors of diving. The watch impressed me, and while it is likely too large for my small wrists, it will look good on anyone of average size. I am interested to see where this case and movement will next appear. 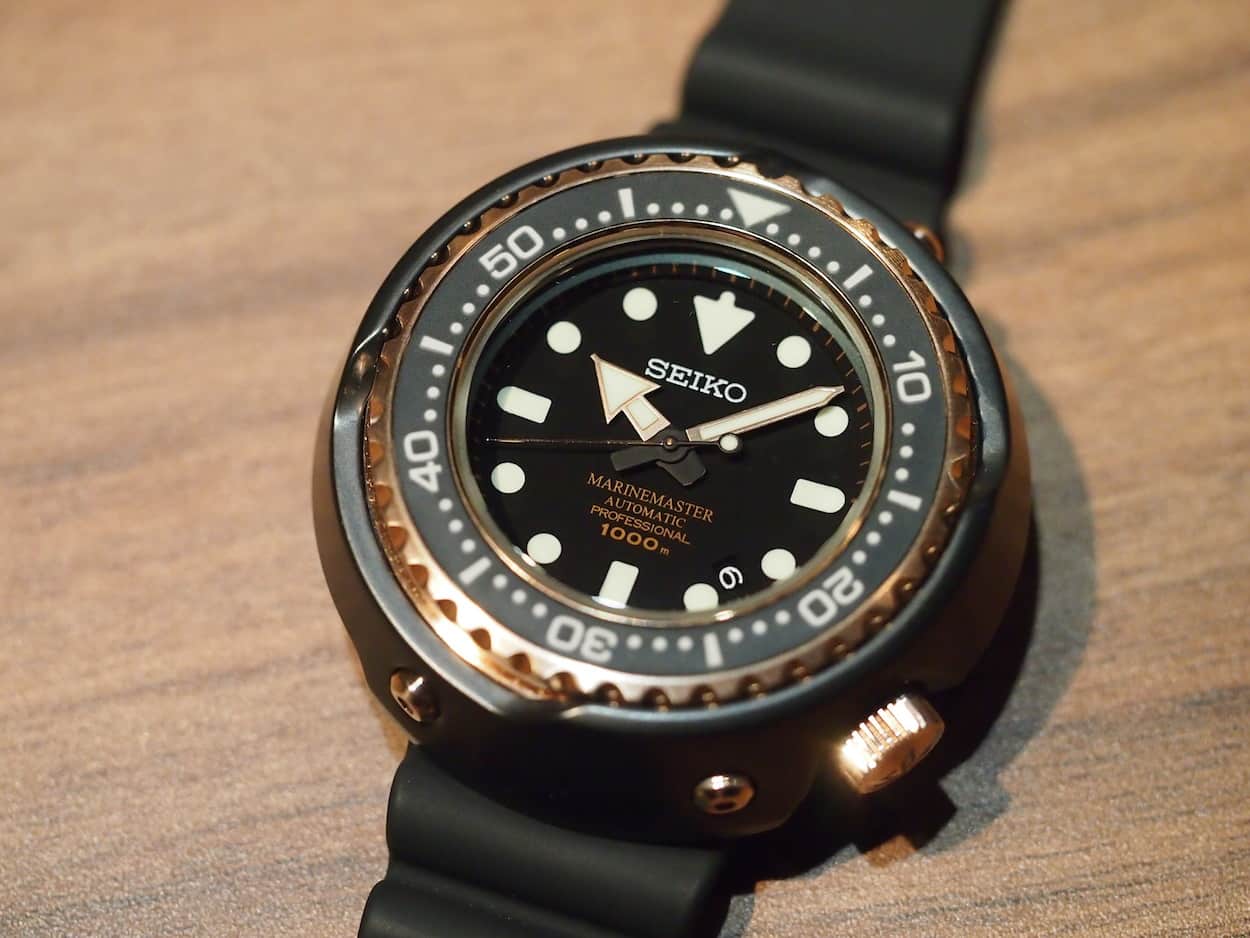 Now, we move on to my favorite series of Prospex watches, the Seiko Marinemaster “Tunas”. Sadly, it looks like many of the rumored new Tunas will exist solely as JDM pieces but one will be released globally. This new Tuna is coded as the SBDX014. The watch is essentially the same as today’s “Emperor Tuna” SBDX011, which uses titanium for the case, but ushers in some notable changes. The watch retains the Emperor’s 8L35 caliber, automatic movement which beats at 28,800 bph. Diameter also remains at 48.2mm with a thickness of 17.4mm. Water resistance remains at 1,000 meters. Changes come in with a crown marked with the “X” Prospex symbol and the shroud, instead of titanium, is now made of ceramic. Intriguely, this Tuna uses a titanium case but it rose gold coated. A silicone strap is provided. New lumibrite is used which glows 60% longer than in the past. Pricing is expected to be 3450 Euros. 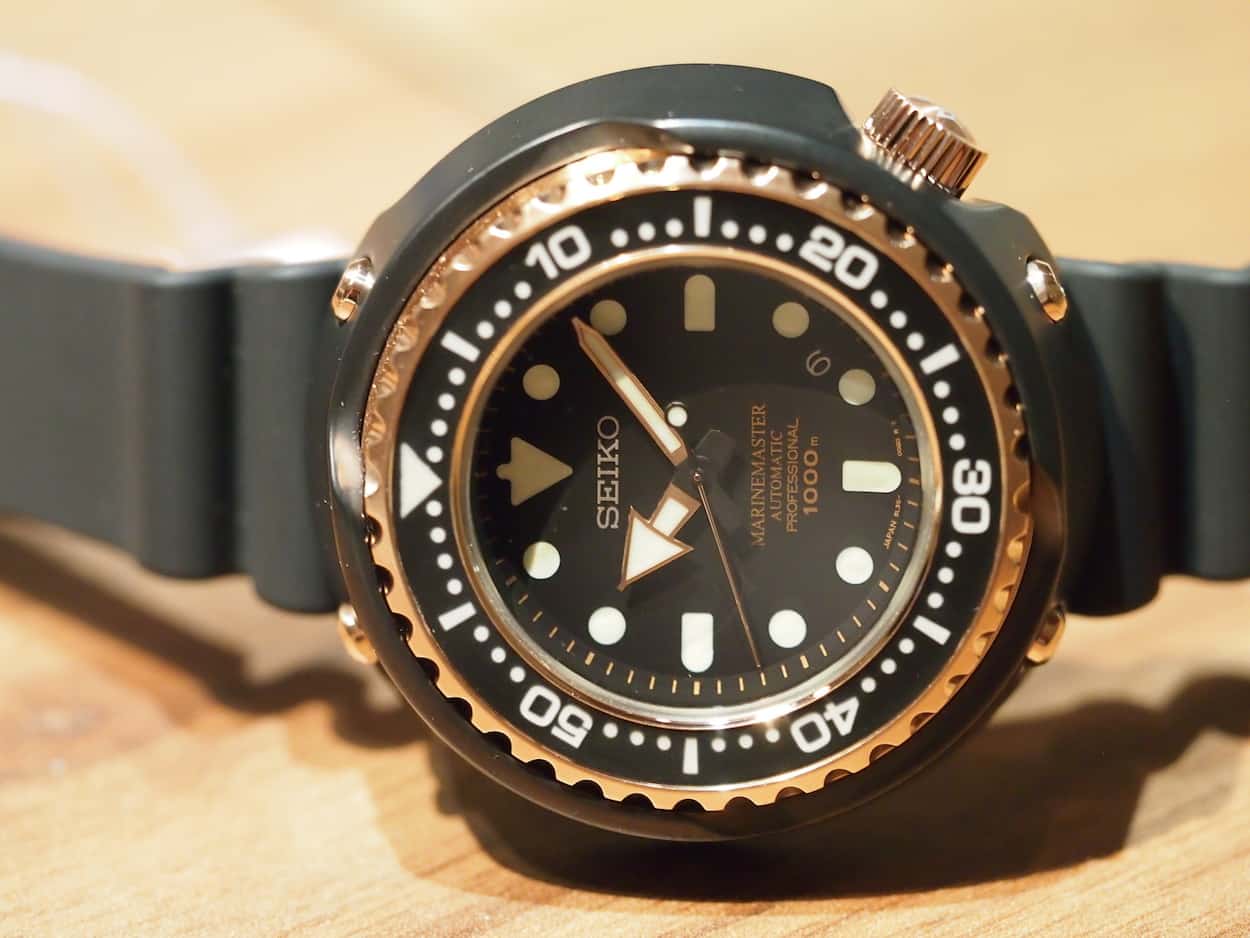 My thoughts: Like the first watch we spoke about, the forums were awash with concern over various details.  On this piece, the worries stemmed from the hands and also the general color scheme of the watch. Unlike the prior gold tunas, this piece uses rose gold as a coating and I can tell you that it is stunning. I really liked the color in person and it’s more alluring and “warm” looking versus the pure black of the Emperor. The hands also did not put me off at all; they look modern and clean. Perhaps the gold Spring Drive Tuna (SBDB008) indoctrinated me to the use of this style of hands but I really like it on this watch. I hope the pictures I’ve taken give you a better feel than the stock photos. I should also mention that the new ceramic shrouds are extremely smooth and attractive. Finally, I’m also glad that Seiko chose to apply the Prospex symbol to the crown versus the dial. I am still not completely sold on the Prospex symbol but I can live with it in a place that is essentially out of view. Overall, I really liked this watch and would consider adding one to my collection. 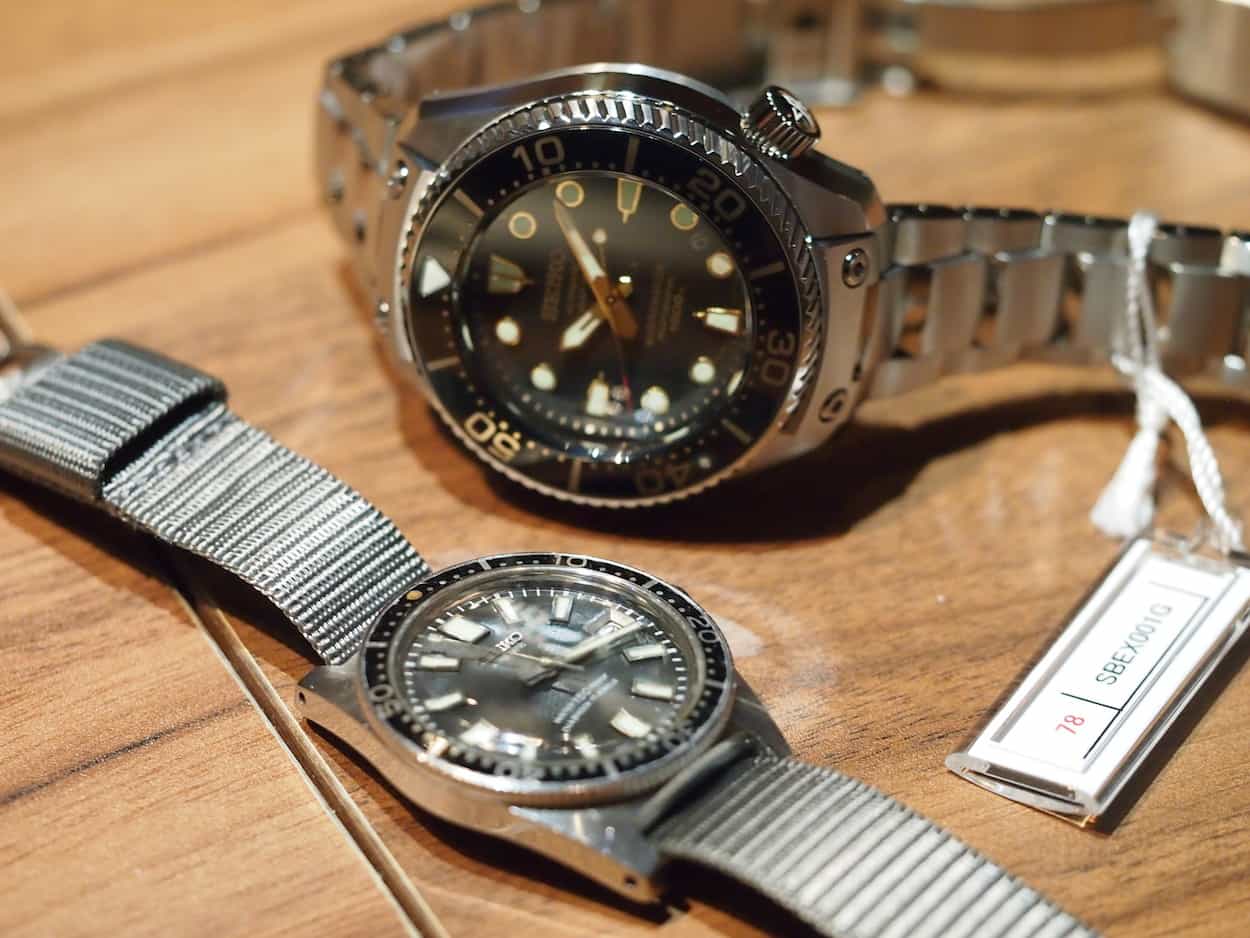 In summary, I was impressed by the 2 new Marinemasters that Seiko brought to Baselworld. Of course, I’d like to see an even more global product offering but I consider this a step in the right direction. Incidentally, I did ask Seiko representatives if this means the end for the beloved Emperor and Darth Tuna models but unfortunately no information was given. If I were a betting man (I’m not), I’d guess that they are not long for this world as they use older handsets, older lumibrite and different shrouds. Furthermore, they also lack the presence of the new Prospex symbol. So, the bottom line is, if you’re not sold on the new Tunas, and want to be an existing model new, you may want to consider making a move. In the meantime, let us know what you think about the 2 new heavy-duty Prospex models in the comments below!