A watch to commemorate a guitar
Gerard Nijenbrinks
comments 11
Share

Seiko has introduced a limited edition of its new 5 Sports model. Brian May’s guitar, the Red Special, inspires the dial echoing the design of the guitar, which Brian and his father built in the early 1960s. 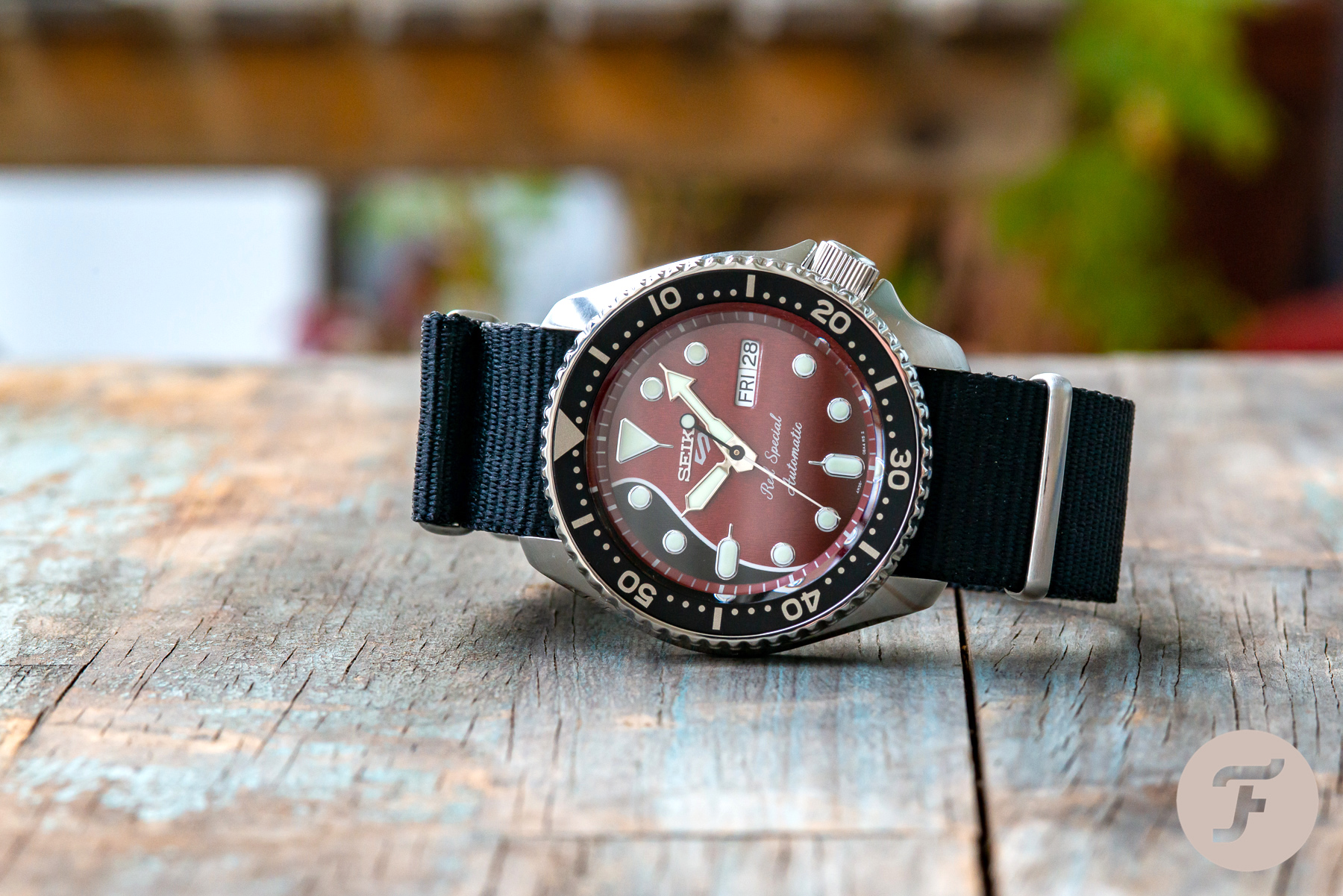 Throughout his career, rock legend Brian May has relied upon his “Red Special” guitar to create the sound that helped make Queen one of the world’s most celebrated rock bands. And although the model name of Seiko’s Limited Edition watch seems to be “Sports 5 x Brian May”, the watch itself is inspired by his guitar. The dial has the same red and black color scheme as the “Red Special” and features a delicate wood-like pattern like the body of the guitar. Meanwhile, I know it’s not the first, but think it’s pretty safe to say that this is one of the very few watches to be inspired by a guitar. 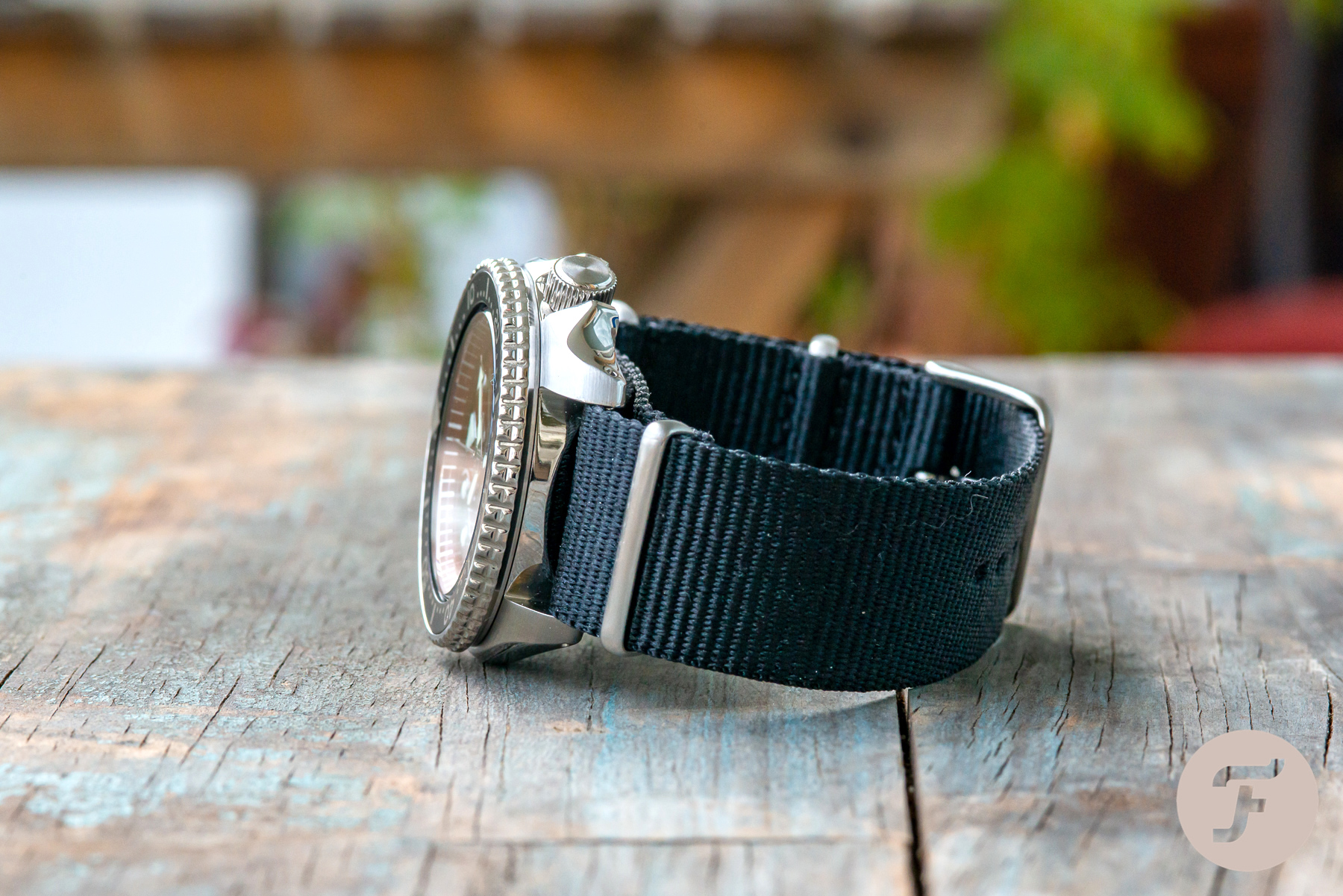 Did you know that April 17th is Queen’s Day in Japan? On April 17th, 1975, Queen landed at Haneda airport for their first-ever visit to Japan. It was during that first Japanese tour that Brian bought a Seiko diver’s watch. The quartz-powered model he bought back then was reference 7548-7000, and word has it that later he’s been seen on stage with a newer 7548-7010 as well. It is no surprise, then, that Seiko celebrates their unsuspecting ambassador with his own watch. I assume that from now on, we’ll see him in public wearing the new Seiko 5 Sports x Brian May instead of his trusted older quartz divers. 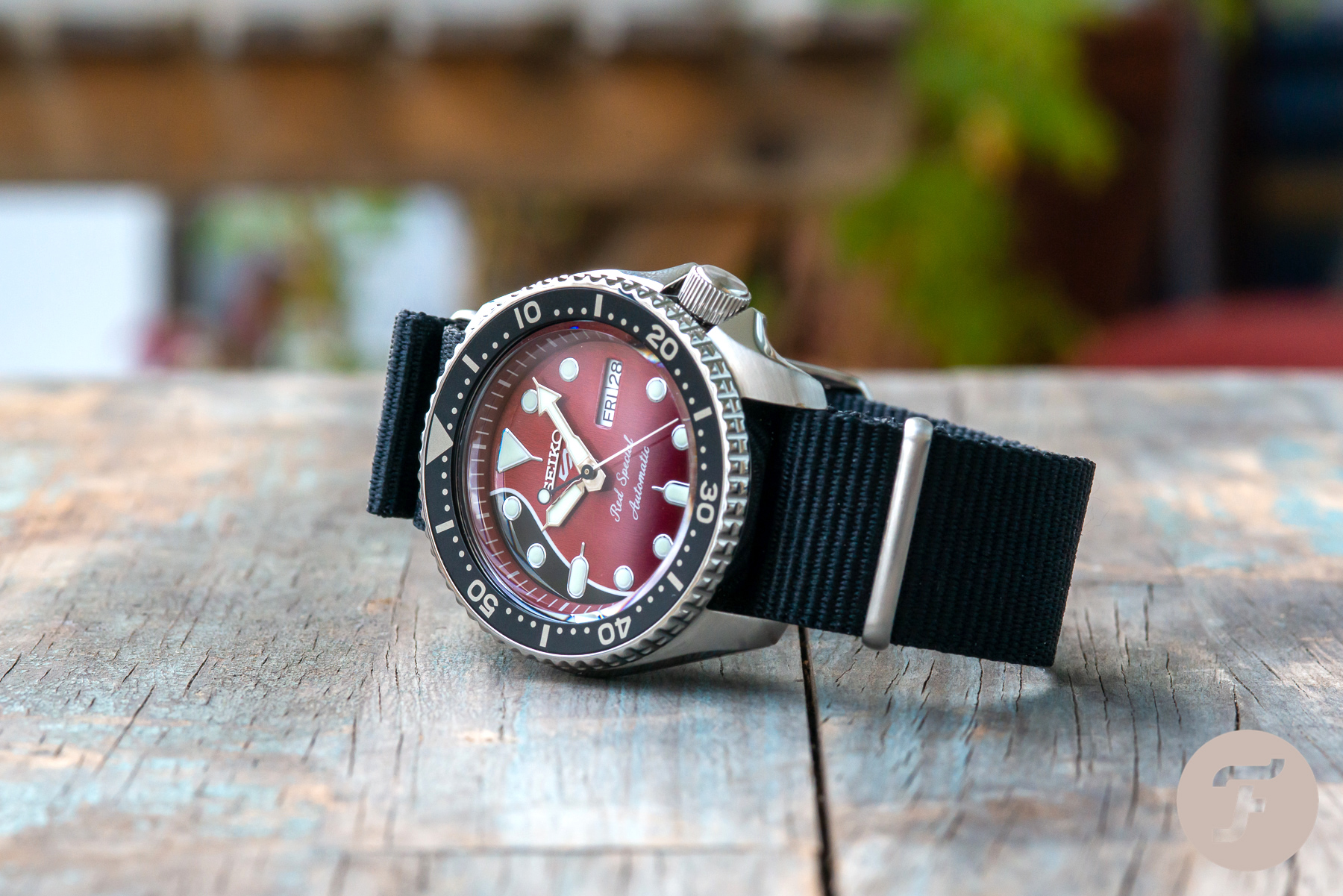 By the way, reference 7548-7000 was Seiko’s first attempt at a quartz-powered dive watch and was adapted from the automatic 6309 platform. A few years later the movement appeared as caliber 7549 in the professional 600M Tuna series. As such it’s a rather over-engineered movement and consequently a favorite quartz movement of many watchmakers. 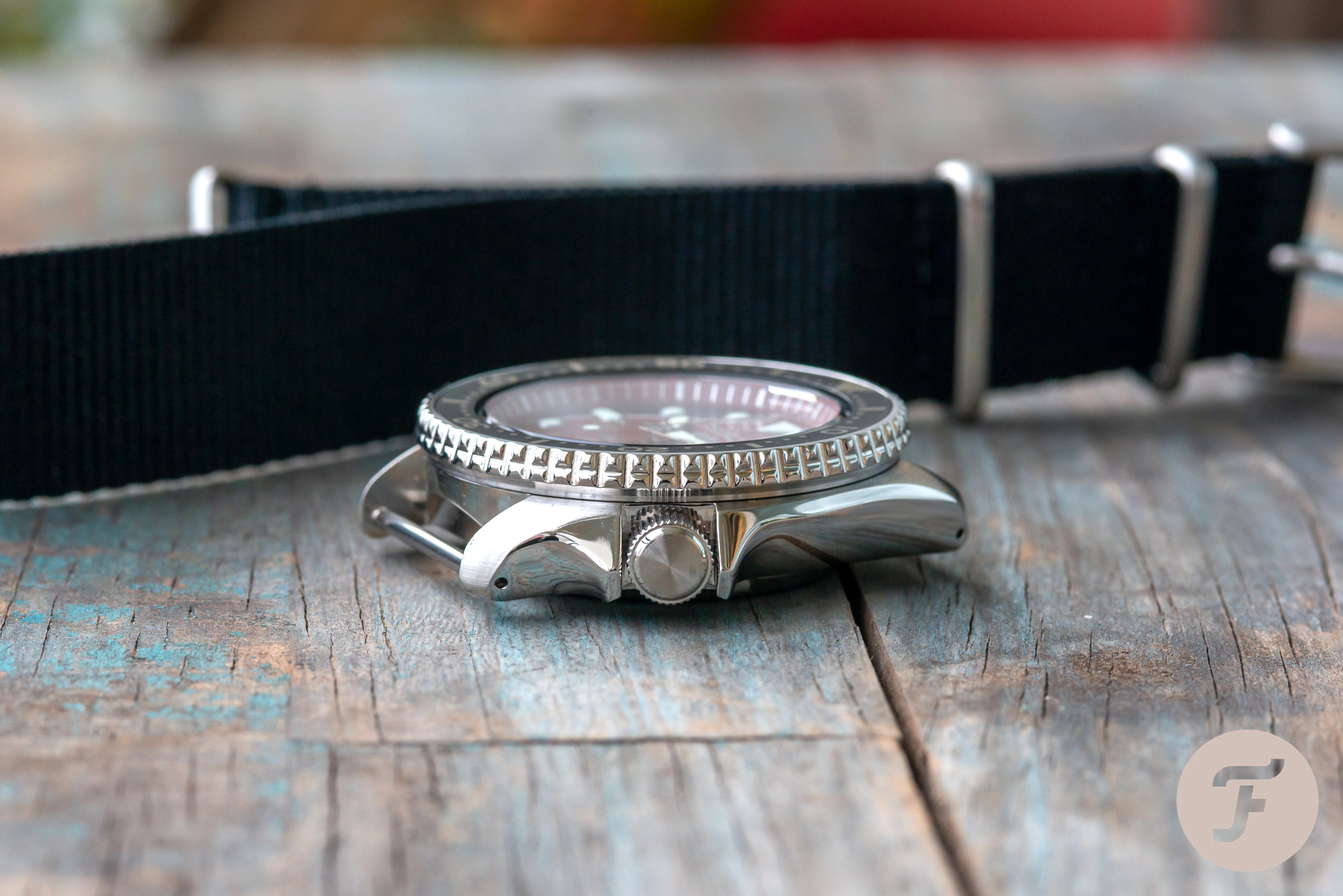 Potential of the Seiko 5 Sports model

As with many newly introduced watches, there were positive and negative reactions when the new Seiko 5 Sports series was introduced last year. From the beginning, we at Fratello saw the potential and were fans from pretty much the first hour. In my opinion, most negative reactions came from people who didn’t understand the positioning of the watch at that time.

Although probably aesthetically somewhat similar, it was no substitute for the discontinued SKX diver’s series. As a Sports watch it ticks a lot of boxes and has a lot of potential. To llustrate this, Seiko launched the collection with 26 different models. Unsurprisingly, that kind of versatility makes it very suitable for limited series. The Brian May’s Red Special is a good example of how this model can be adapted into something entirely new. 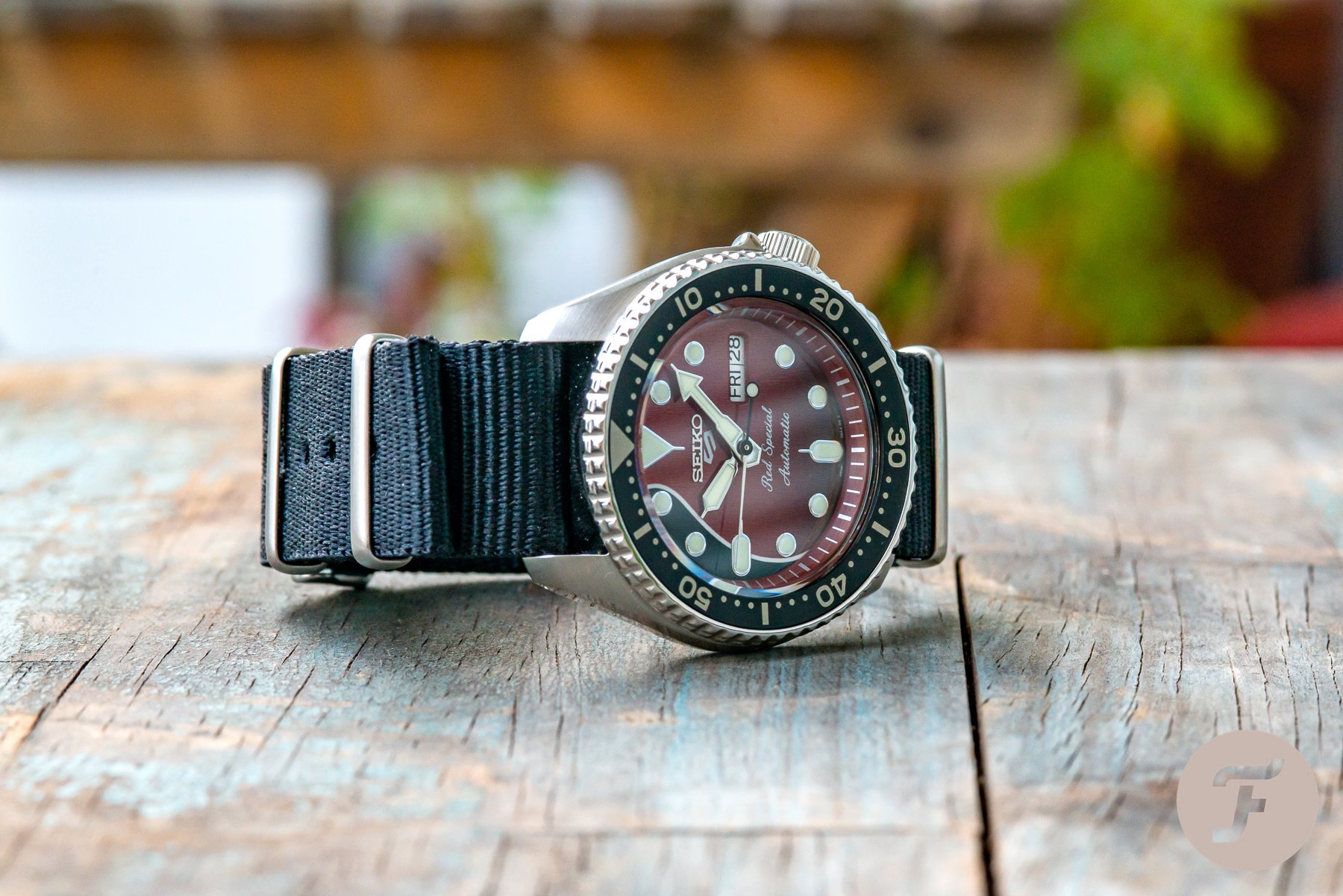 Suitable for Rock-Star use

Although the underlying Seiko 5 Sports watch is constructed in a very different way as Brian’s old 7548-7000, it is also built to last. Not with a battery-operated quartz movement, but with the trusted caliber 4R36. 10 Bar water resistance will be fine for heavy-duty Rock-Star use. And with a Hardlex crystal, and its robust steel case, it has all the qualities one could ask for. Some time ago we recorded a video on our thoughts about the technical side of the Seiko 5 Sports series. If you’re interested in that I invite you to have a look here. 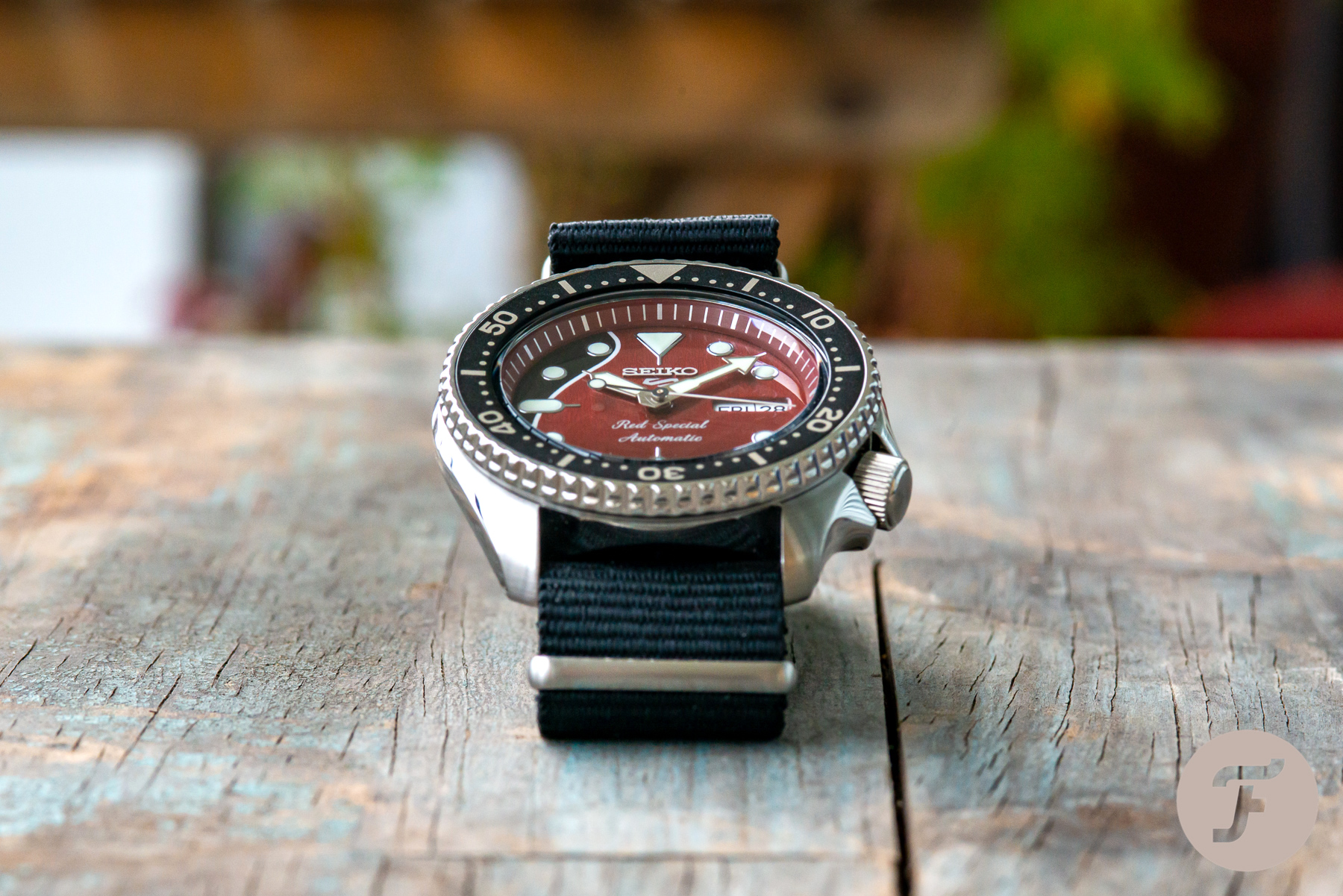 The guitar-inspired dial is what makes the Brian May edition stand out from regular models. Brian made his guitar, the Red Special, together with his dad entirely by hand, with only hand tools. The neck was carved from the wood of an old fireplace. The body was made from blockboard with an ancient oak insert, covered with a mahogany veneer. Additionally, the dial of the Seiko 5 Sports Brian May watch has the same red and black color scheme as the Red Special. It also features a delicate wood-like pattern like the body of the guitar. Ultimately, besides the Seiko brand and 5 logos, the dial is signed Red Special as well. 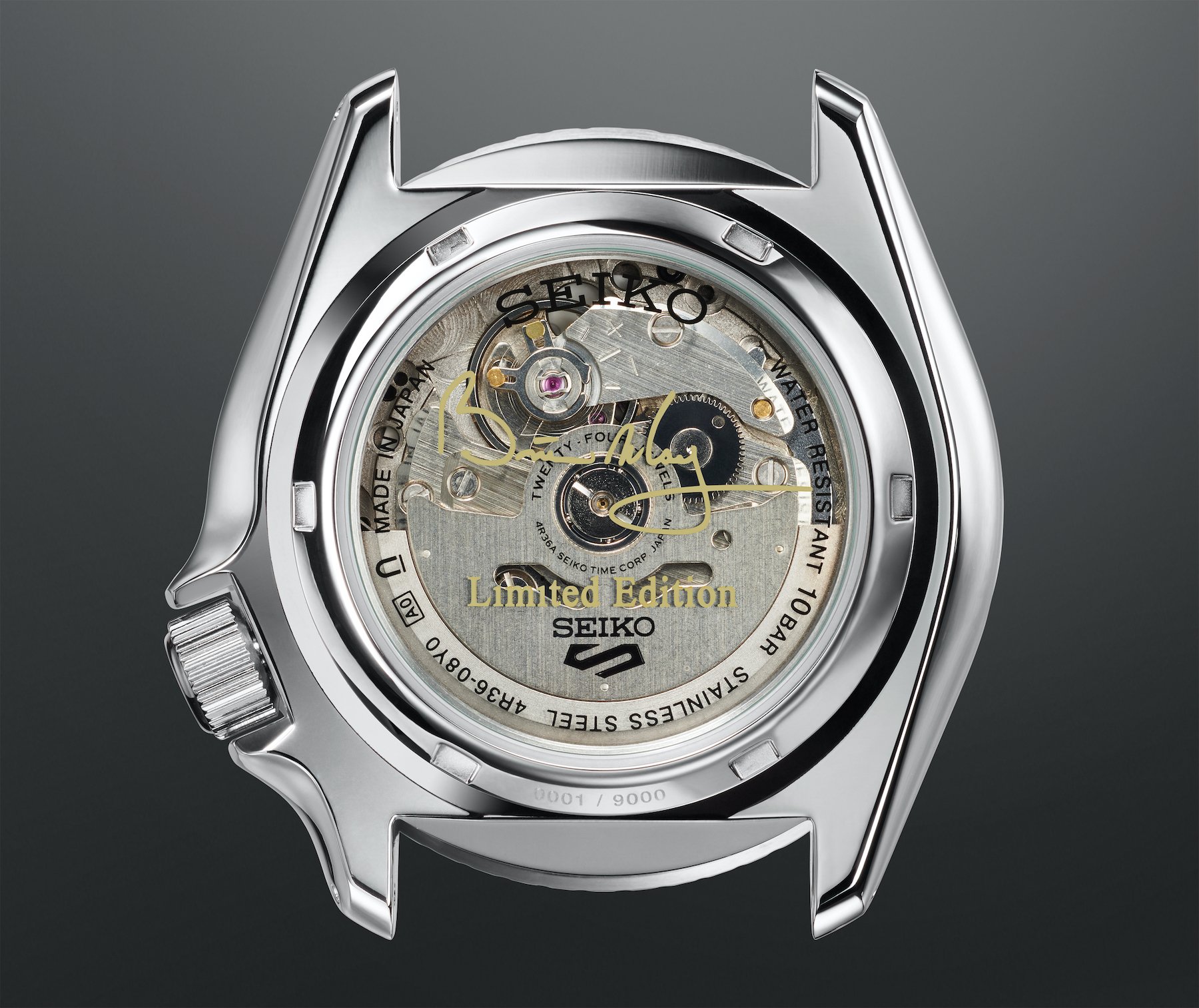 Flipping the watch shows even more specific details. Besides Brian’s signature on the see-through case back, it comes with “Limited Edition” markings and a unique serial number. 9,000 of these watches will be produced in total. Quite a number, but supplied worldwide with an affordable price, I expect them to sell out pretty quickly. 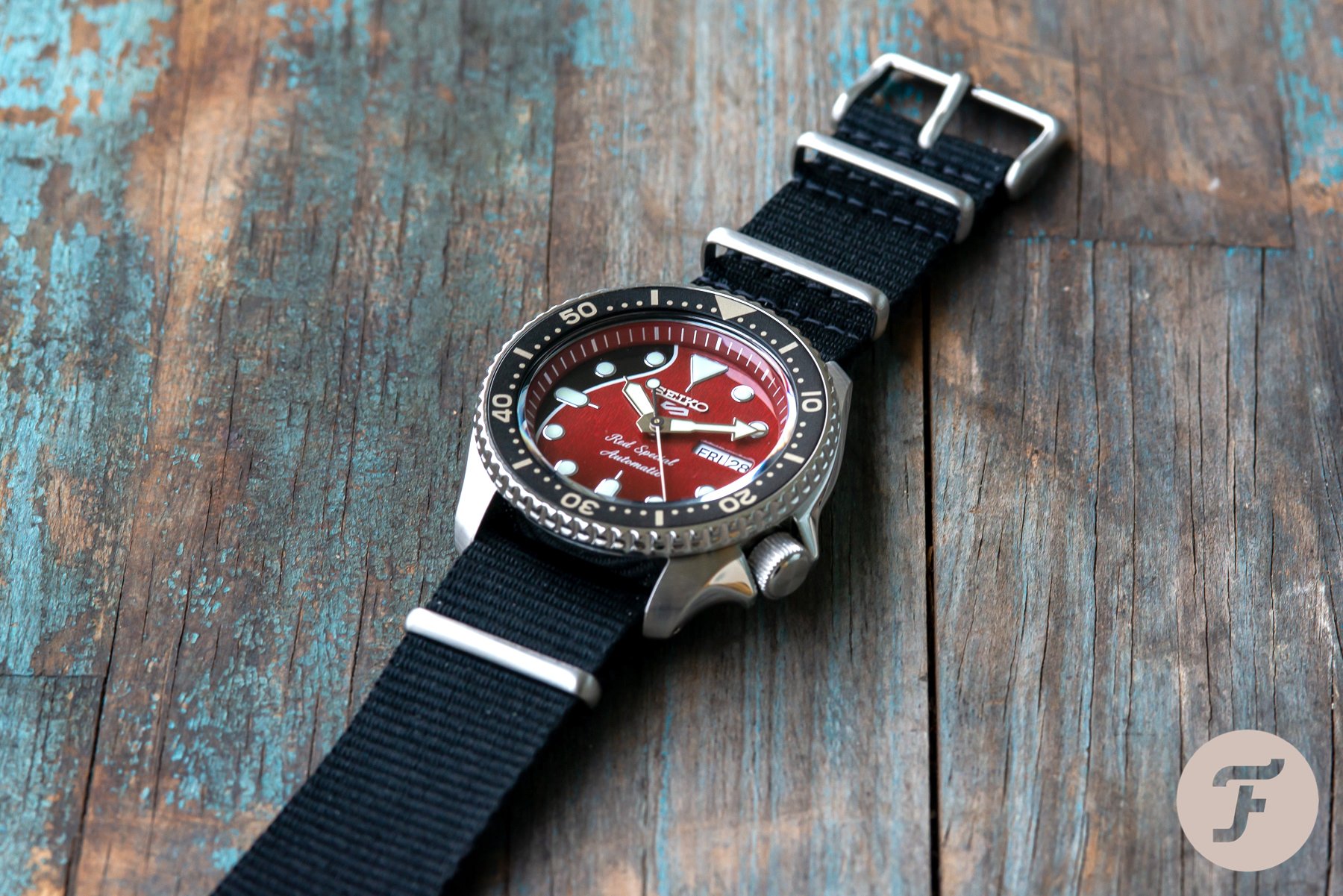 The watch comes on a black nylon NATO-type strap. The reason Seiko and Brian chose to use this type of strap should be that it somewhat resembles the guitar strap that Brian uses on his guitar. I don’t know. To me, it’s just a black NATO-strap, which doesn’t imply that it doesn’t fit the design of the watch. 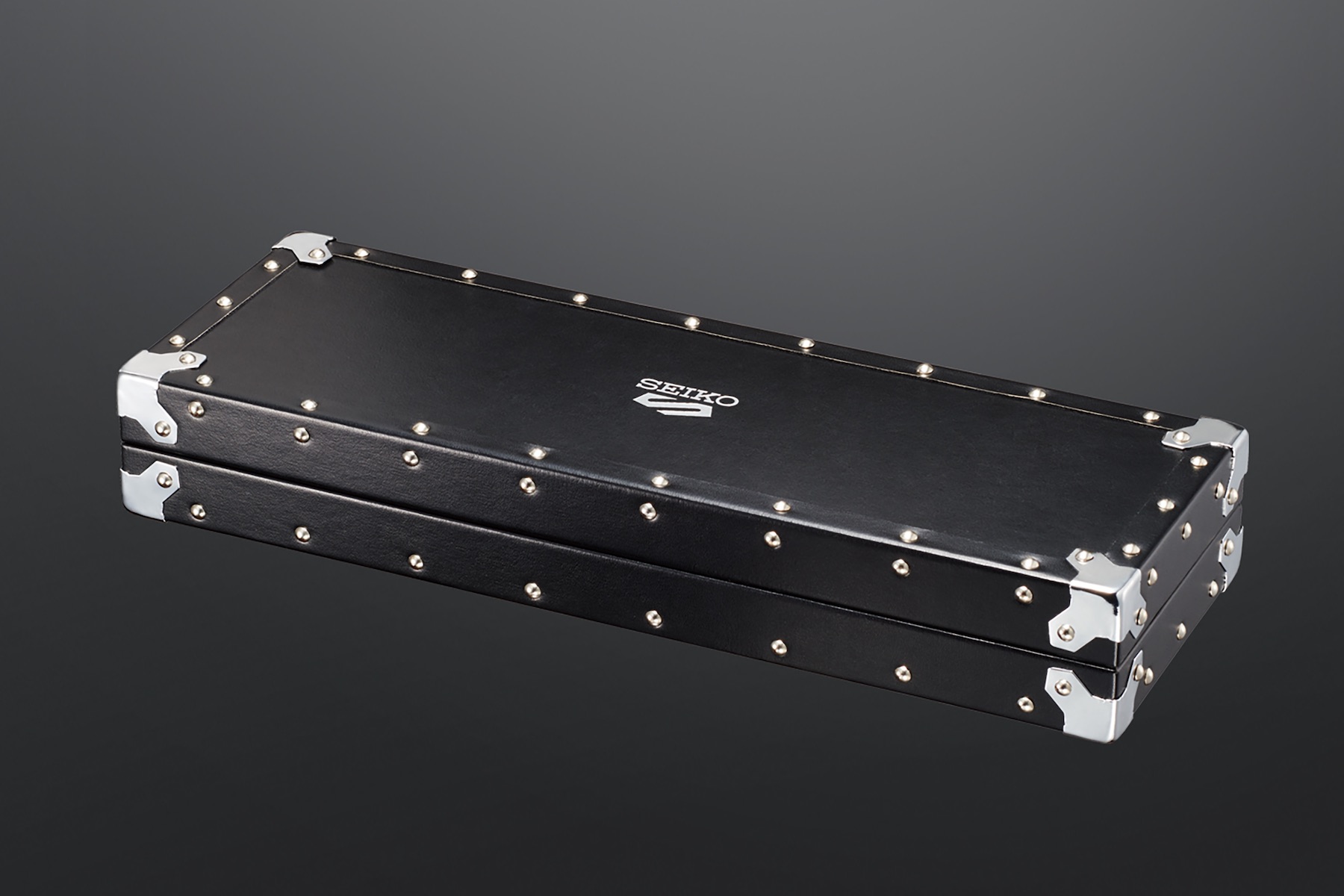 Designed in accordance with the Red Special’s custom flight case, the Seiko Sports 5 x Brian May comes in an attractive presentation box. The presentation box also contains a commemorative coin that is based on the sixpence that Brian uses as a plectrum. 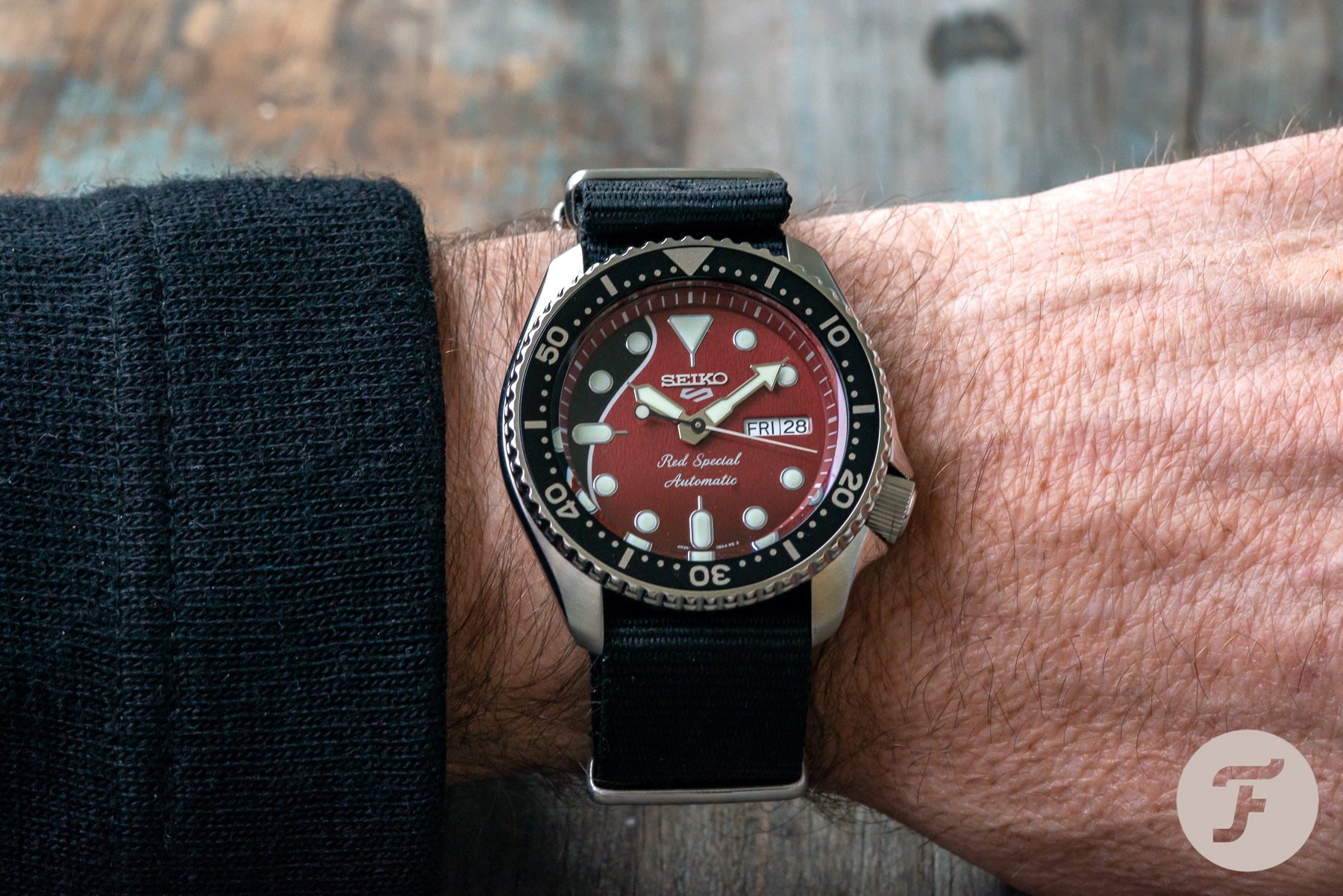 The reference number for the Seiko Sports 5 x Brian May is SRPE83K1. It will be available from — of course — May 2020 at an MRRP of €560. More information on this watch, and the Seiko 5 Sports line in general, can be found at www.seikowatches.com.

Hot Topics
Sunday Morning Showdown: Rolex Deepsea Sea-Dweller Vs. Omega Seamaster Planet Ocean Ultra Deep
77 comments
Theft And The Fear Of Watch Ownership: When Watch Collecting And Crime Both Increase
57 comments
The Watches I’ve Taken On My Summer Holiday — RJ Shares His Picks From Omega And Swatch
55 comments
Hands-On With The Omega Aqua Terra 38mm — A Capable Do-It-All Powerhouse
49 comments
The Seiko SPB143 Revisited: Waiting Out The Hype For A Proper First Impression
49 comments
Popular
Grand Seiko SBGA211 ‘Snowflake’ And Why I Didn’t Buy It
Robert-Jan Broer
22
Oris Classic Date Or Save Up For an Omega De Ville Prestige?
Robert-Jan Broer
17
Why You Can’t Go Wrong With The Rolex Datejust
Robert-Jan Broer
3