Without creating any noise about it, Seiko sneaked in a new version of the Marinemaster: the Prospex Marinemaster 300 SLA021J1.

The Marinemaster 300 was my introduction to the more expensive Seiko diver’s watches. I had a Sumo at the time, which I loved, but then I got to meet the Marinemaster 300 with reference SBDX001. It was a real eye-opener to see what Seiko was able to do for the €2000 price tag it had. The review I wrote back then, became one of our best-read articles of all-time. Since then, in early 2015, the Marinemaster 300 became a very loyal companion on many of my trips. Both professionally and privately, especially when there was a pool or a sea involved.

And then, there is the Marinemaster 300 SLA021J1 watch, although it is officially not a ‘Marinemaster 300’ anymore. We requested this watch from Seiko to have a closer look at it. 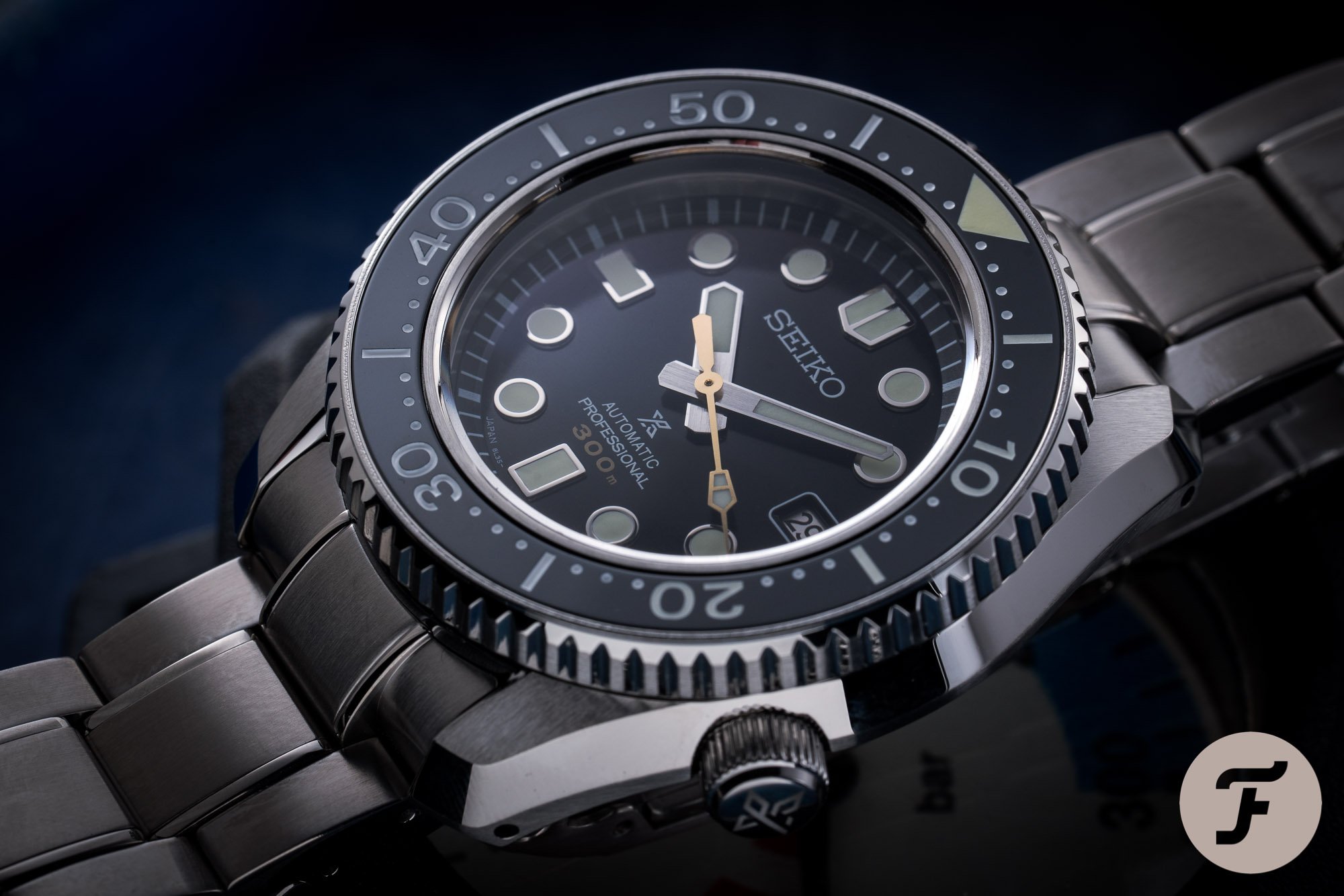 Two things that I noticed and would like to start with first:

They also relate a bit to each other of course, as Seiko made it possible to come up with a green dial version with ceramic for exactly the same price. 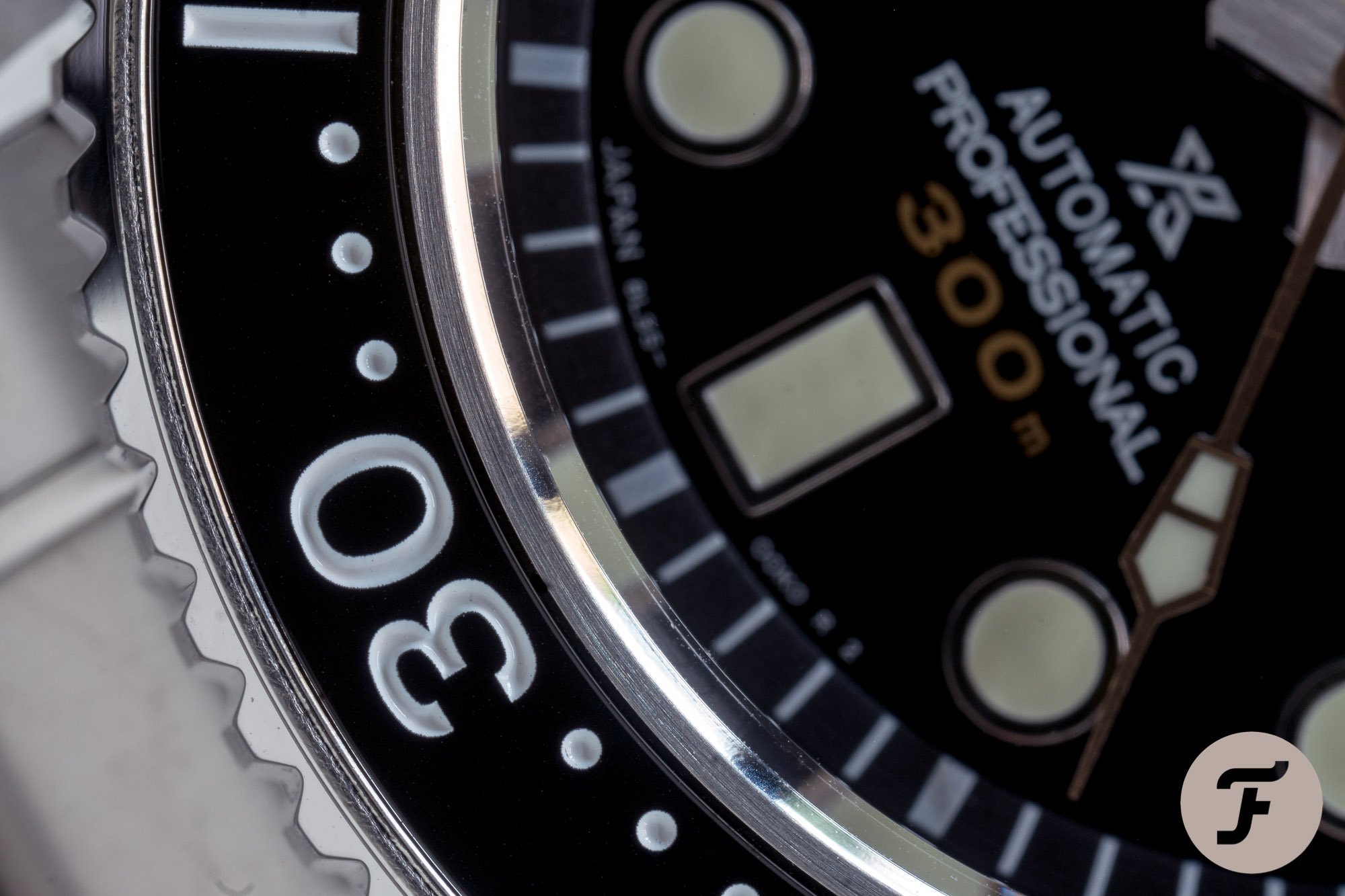 I have the old Marinemaster 300 with steel bezel and even after a few years of use, including some holidays, the bezel holds up very well. There are some scratches on the case and bracelet, but the bezel is still 100% fine. Still, I like the upgrade to ceramic. The price is another topic. For the LE Seiko decided to stay firm at the €3200 price tag for this watch like the green LE.  Sometimes, Seiko charges more for an LE and sometimes not.  Comparing it to prior MM300’s, the price has increased in steps since our first review (€2000 for the SBDX001, €2350 for the SBDX017 which was later on increased to €2500), it is quite a step to €3200. Now, the crystal changed from Seiko’s own Hardlex to sapphire, which is indeed a more costly choice for a crystal, but it’s still a large jump for the total difference in price. I think that Seiko pricing has been revised and has increased overall in the last 12 – 18 months. It always used to be a lot of value for money though, so let’s see if this Seiko Marinemaster 300 SLA021J1 still is.

I don’t want to zoom in on the movement for too long, as it is the same movement as used in its predecessors. It is Seiko’s caliber 8L35 movement, based on the Grand Seiko 9S55. In fact, the SBDX017 already had a second iteration of the 8L35 movement, referred to as 8L35B. Somehow in the official press release and information on the website, this is nowhere mentioned. But when I visited the Grand Seiko manufacture, where this movement (and watch) is also being produced, it was definitely the 8L35B in the production line. There are a number of improvements over the 8L35, which is the use of MEMs technology (which refers to tighter tolerance pieces that should allow for better timekeeping and less wear over time). The power reserve of the caliber 8L35B movement is about 50 hours.  The 8L35B also has a slightly different finish than the 8L35 as far as I remember, but you can’t see it anyways as it lacks a display case back. A bit disappointing is the average deviation that Seiko guarantees for this watch, from -10 to +15 seconds per day on average. I think that can be done (much) better for a movement like this. 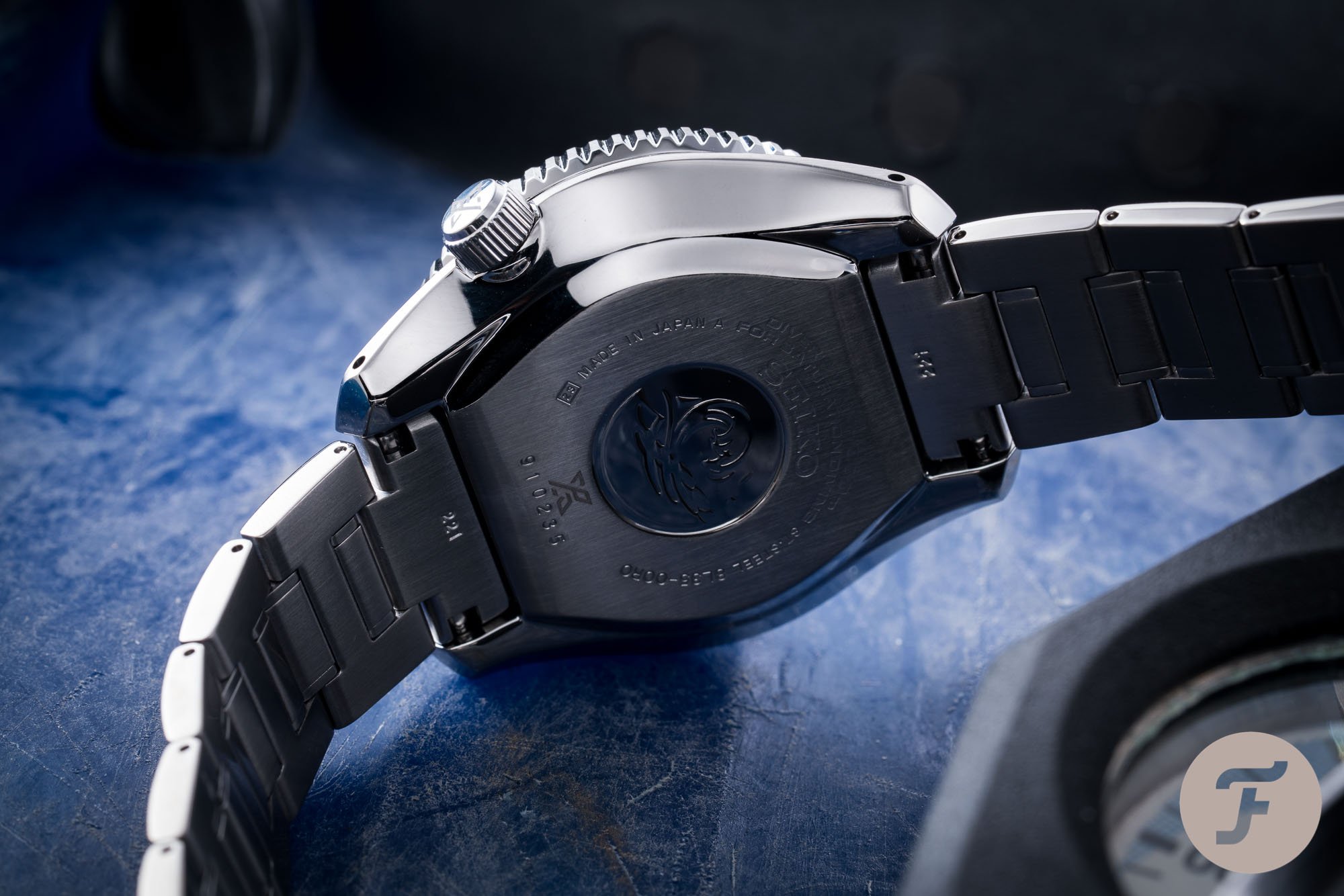 In fact, there is no case back. The case consists of two parts, the case and the bezel, so everything has to come in (and go out) via the crystal. The Seiko Marinemaster 300 SLA021J 1 uses the same monobloc construction as the previous references, which is ensuring water resistance and makes a helium valve (if you’d need one anyway) redundant. On the case back, there’s the ‘Big Wave’, or ‘tsunami’ logo in bas relief as well as some engraving with regards to the reference number, serial number, water resistance etc. If you aren’t already aware of this, the serial number also indicates the year and month in which this watch was produced. As you can see, the serial number on ‘our’ watch starts with 91, meaning that it was produced in 2019 and in the first month, to be exact (9 – 2019, 1 – January). The other numbers are just the ‘production’ number of the piece. Of course, as a professional diver’s watch, the Marinemaster 300 SLA021J1 also has a screw-down crown, as pictured below. 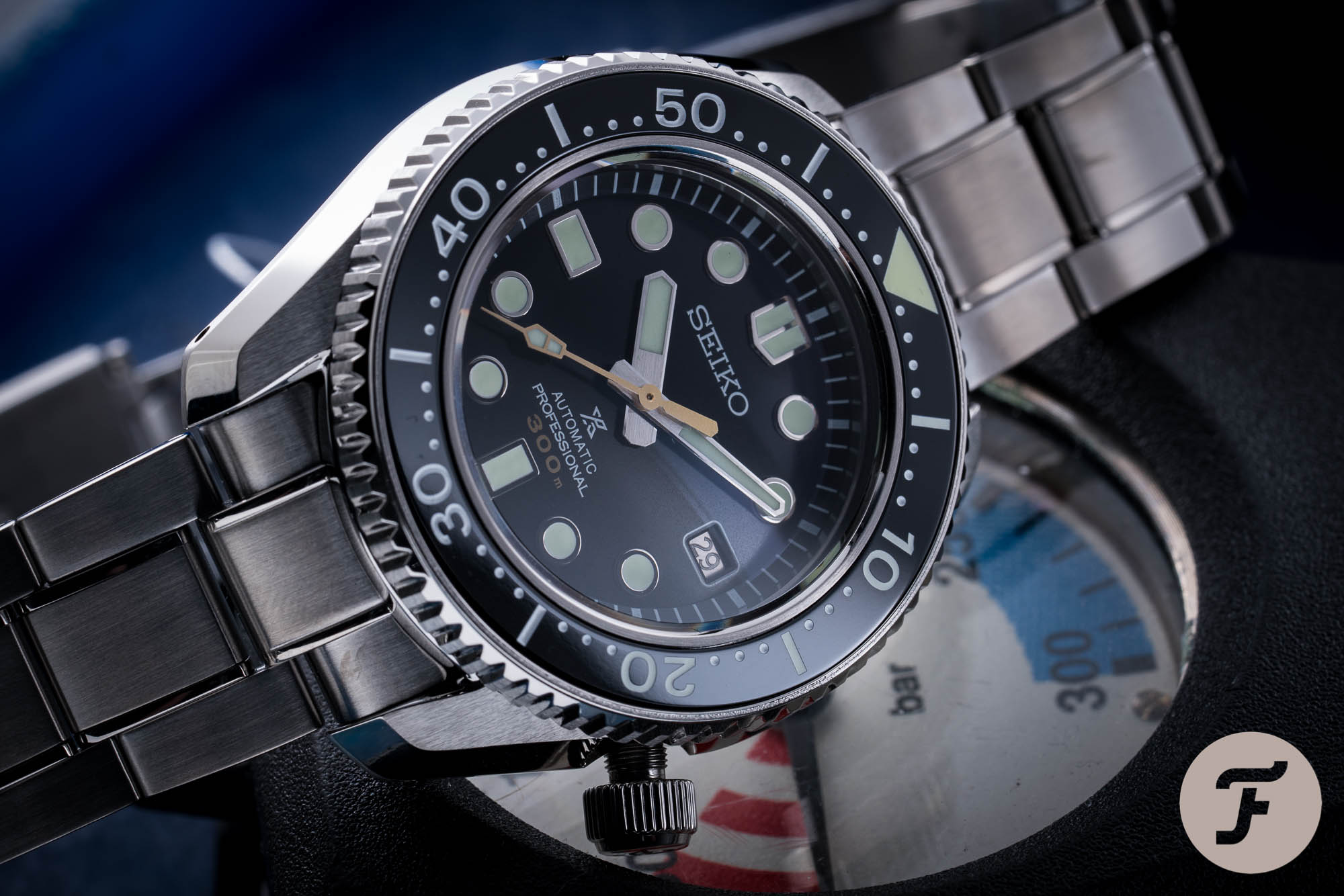 Just like its more expensive Prospex LX brothers, the case of the Marinemaster 300 SLA021J1 is also finished using the Zaratsu polishing technique. This mirror blade polishing is done in the manufacture of Grand Seiko. The ‘zaratsu’ method, which name derives from the name of the machines used for this technique, requires 3 years of training before one is skilled enough to polish cases in this way. In the past, some people complained that when you wanted to have your watch repolished, it was not possible without having it shipped to Japan. Well, that has changed recently. Also at some of the local Seiko subsidiaries, there are skilled Zaratsu polishers these days. Since the SBDX017, the Marinemaster 300 is protected with a super-hard coating. Seiko refers to this as their ‘DiaShield’ treatment. So scratching the surfaces should not be very easy.

The effect of the Zaratsu polishing and the brushed surfaces is stunning. It is one of the things that I enjoy the most of owning a Marinemaster 300, or (Grand) Seiko in general. It is just beautifully done and it is something of which you will never get enough. 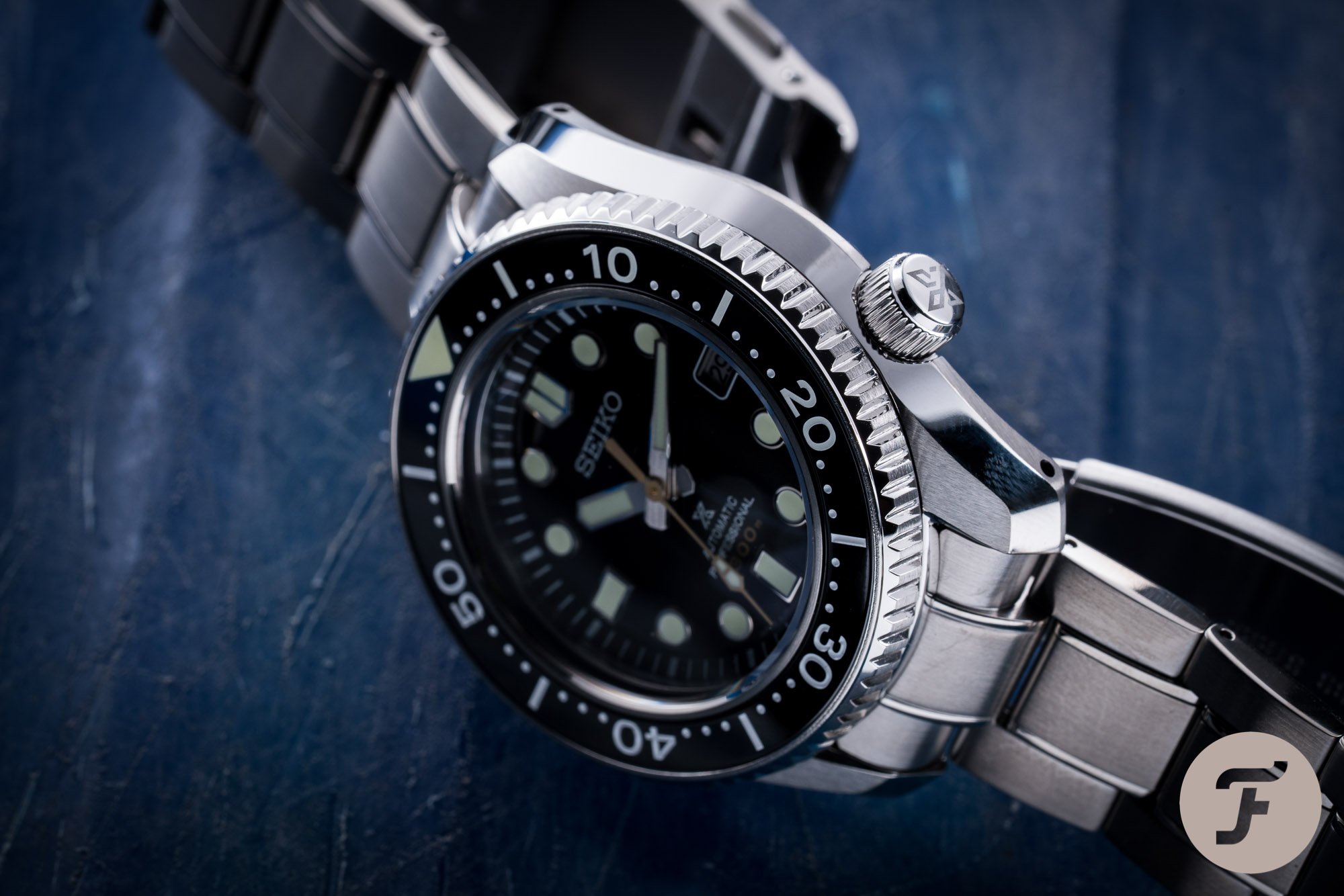 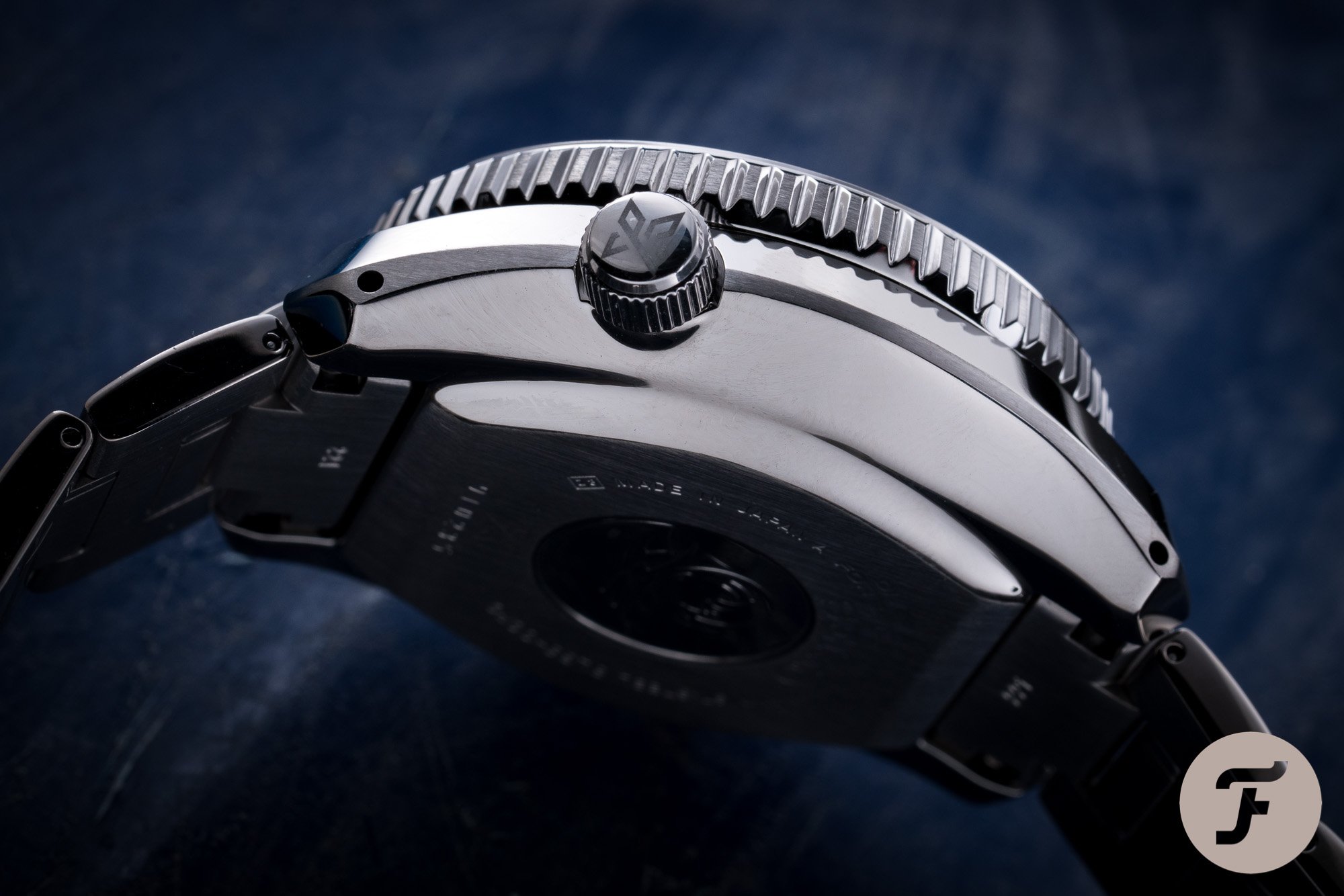 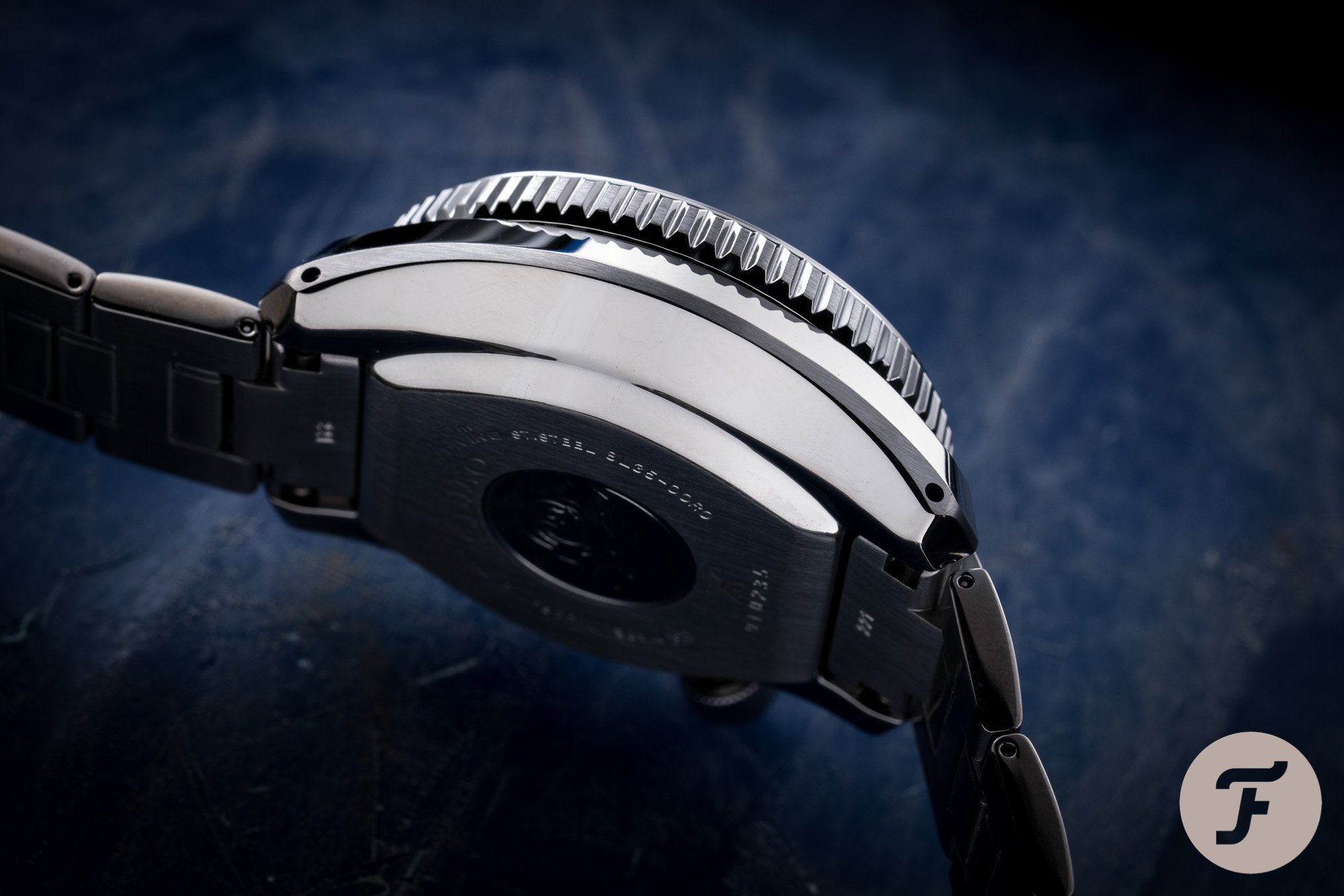 Just like the high quality of the case finishing, the hands and dial are also made with the utmost care and precision in Japan. It isn’t up to par with Grand Seiko, but the hands have a beautiful brushed finish and I think the quality of printing on the dial is more than what you can expect from a watch in this price category. It is without any blemish, even when using a macro lens. Oh, and I love the brushed silver coloured date disc. 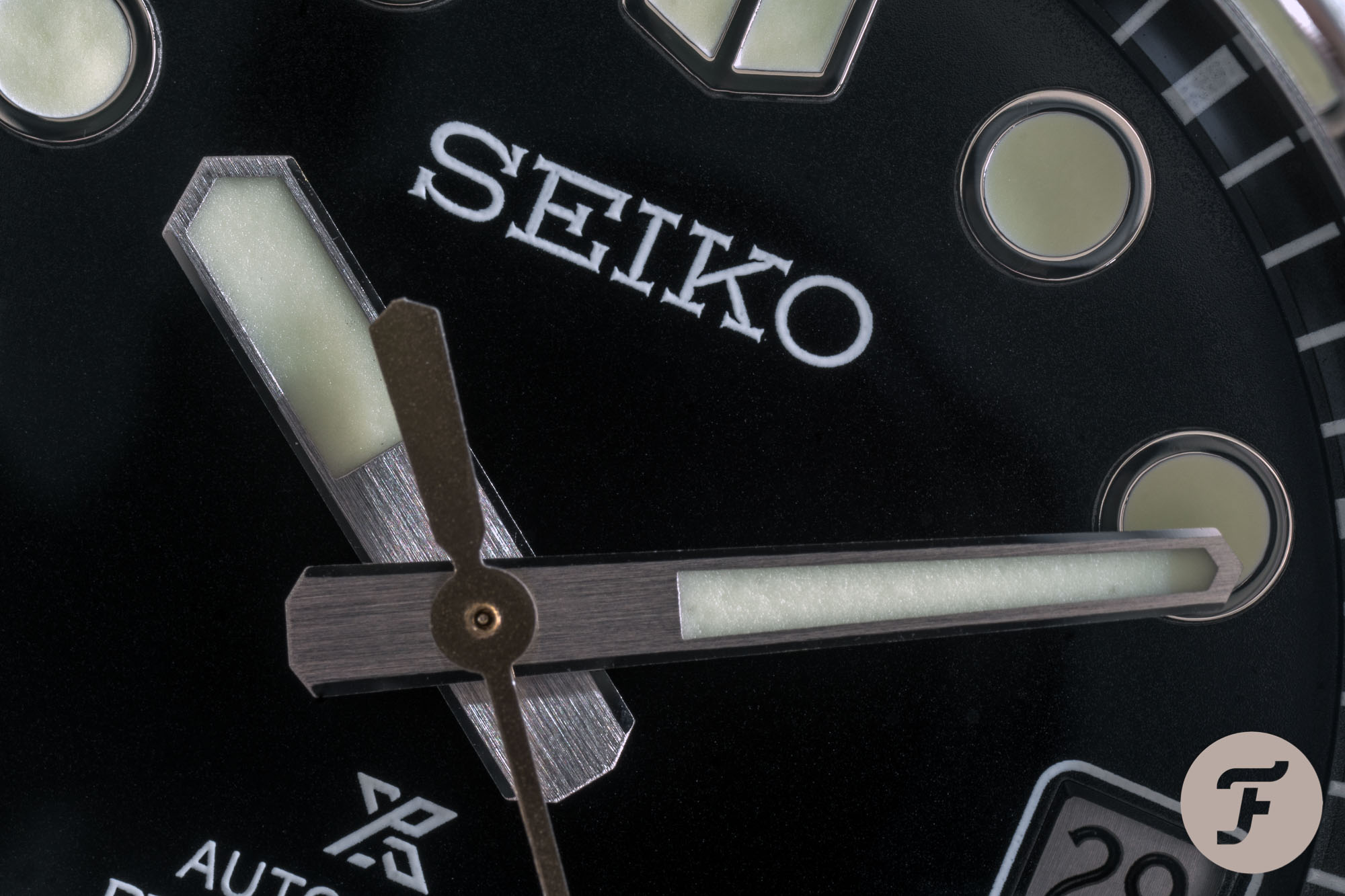 A lot of you are very focused on the luminosity of hands and hour markers, and with Seiko, you know this is nothing to worry about. Seiko uses their own Lumibrite composition, as Gerard explained in this article. During low light conditions, or in the complete dark even, you will have no troubles reading the time on this Marinemaster 300 SLA021J1. As you can see on our picture below, the triangle and the first 20 markers on the bezel are also luminous. 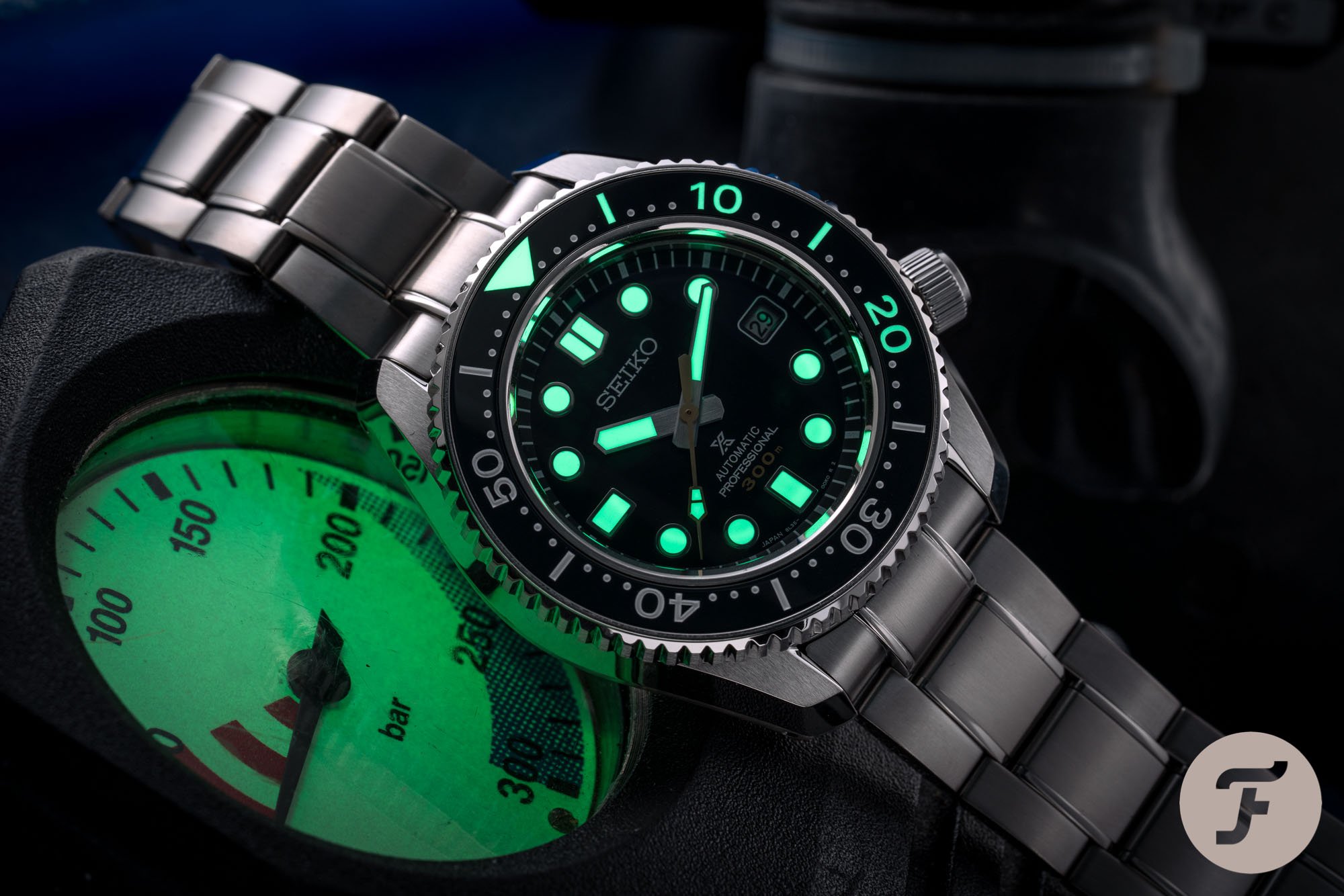 As you can see, the new Marinemaster 300 SLA021J also has some gold elements added to the dial. This was also the case with the green SLA019J1, but apparently, it’s something that Seiko hold onto. And to be honest, I love it. It might be a little nod to the former SBDX012 (2012 50th anniversary edition) and its original 1969 reference 6159-7000 model, but whatever it is, I really dig it. I am not particularly a fan of the Prospex logo on the dial. It replaces the previous Marinemaster printing, but I rather would have seen it empty. I think it would be more spacious than it is now (or was before). It’s just a free-of-charge design tip. 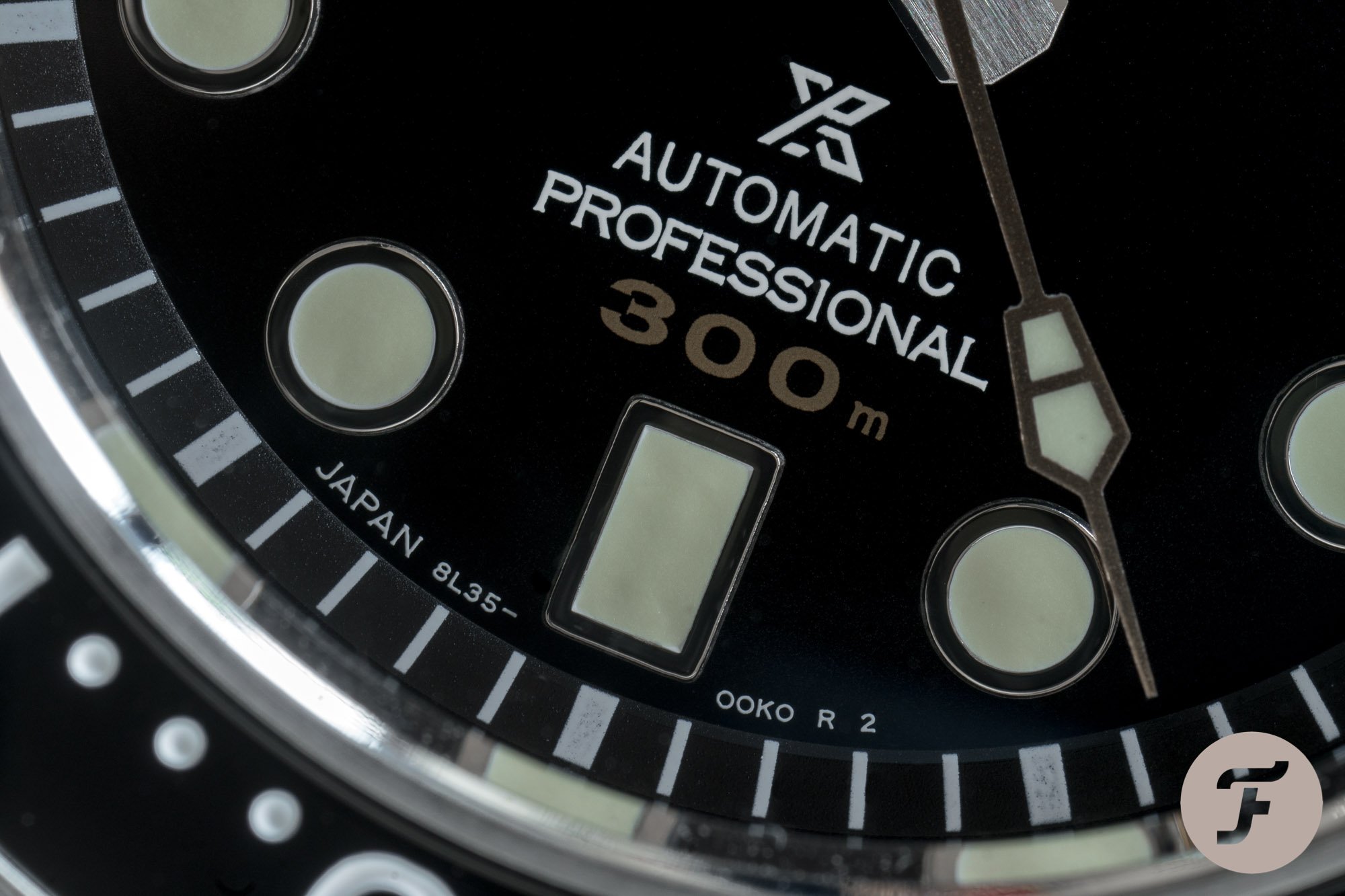 Another thing that hasn’t changed is the bracelet of this watch. The Speedmaster style bracelet has been on the Marinemaster 300 from the start, and although the design is not my favourite, the quality is fine. The clasp is still the same, with the extension mechanism that feels a bit flimsy, but otherwise, it is a solid bracelet. The flimsiness is mainly caused by the thin sheet of metal used for the clasp extension. But what is downright annoying, is that it extends by pulling the flip-lock. This would be a great way of using the diver’s extension, but when I take the bracelet off, it happens more often than not, that I pull the flip-lock a bit too far back, and then the entire diver’s extension comes out. I had wished that Seiko would also adopt the bracelet style of the new Prospex LX models for this watch, that bracelet is simply stunning. 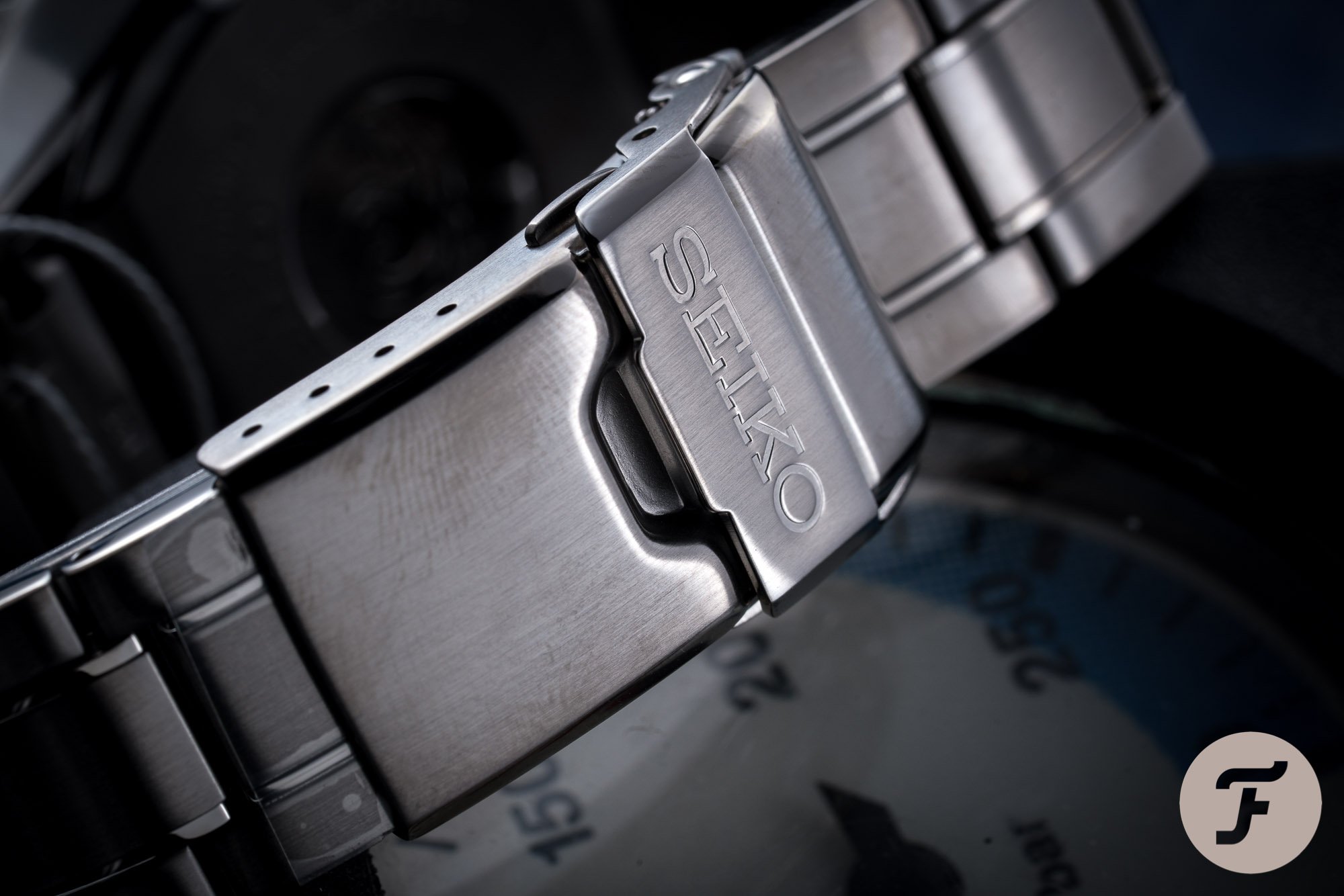 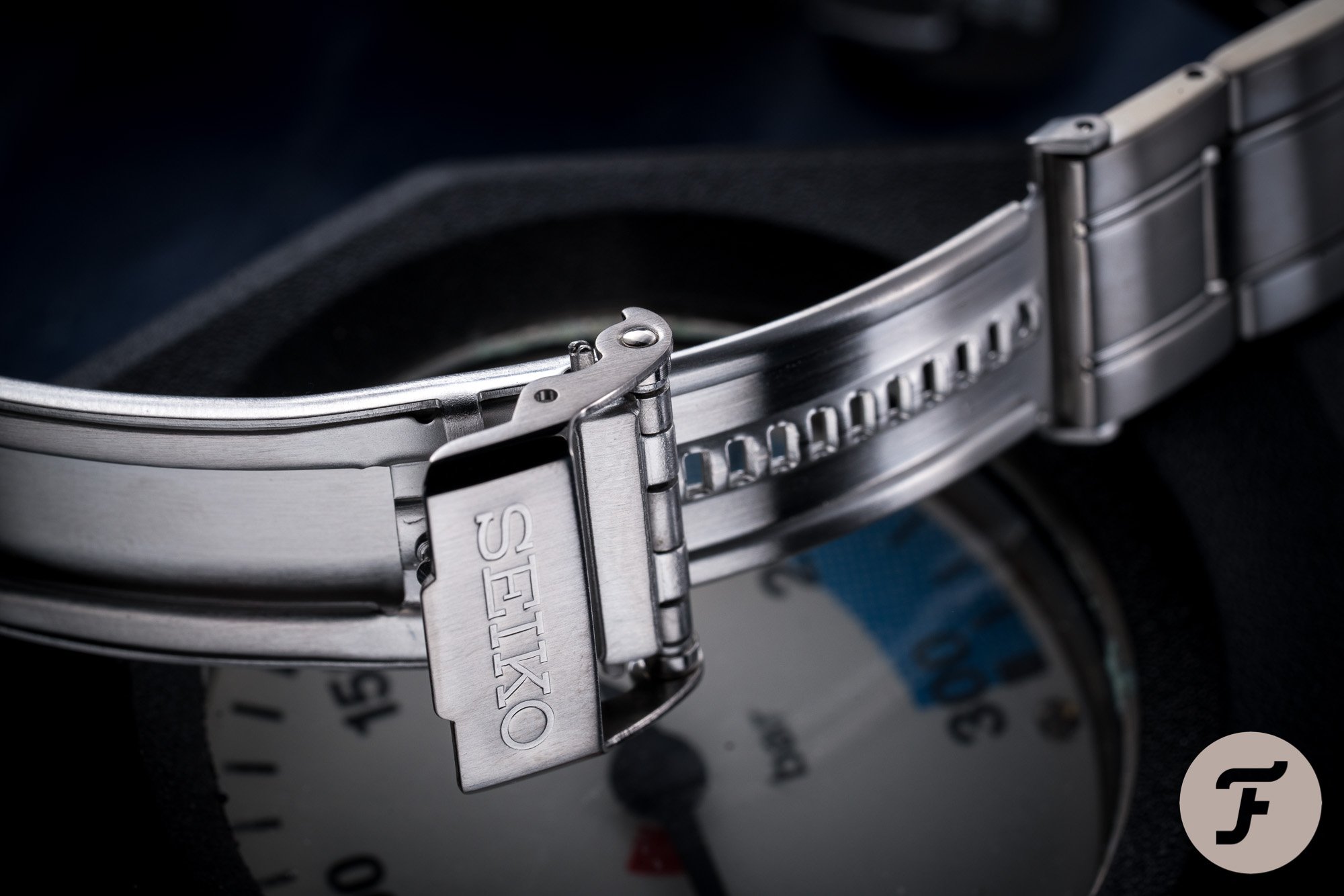 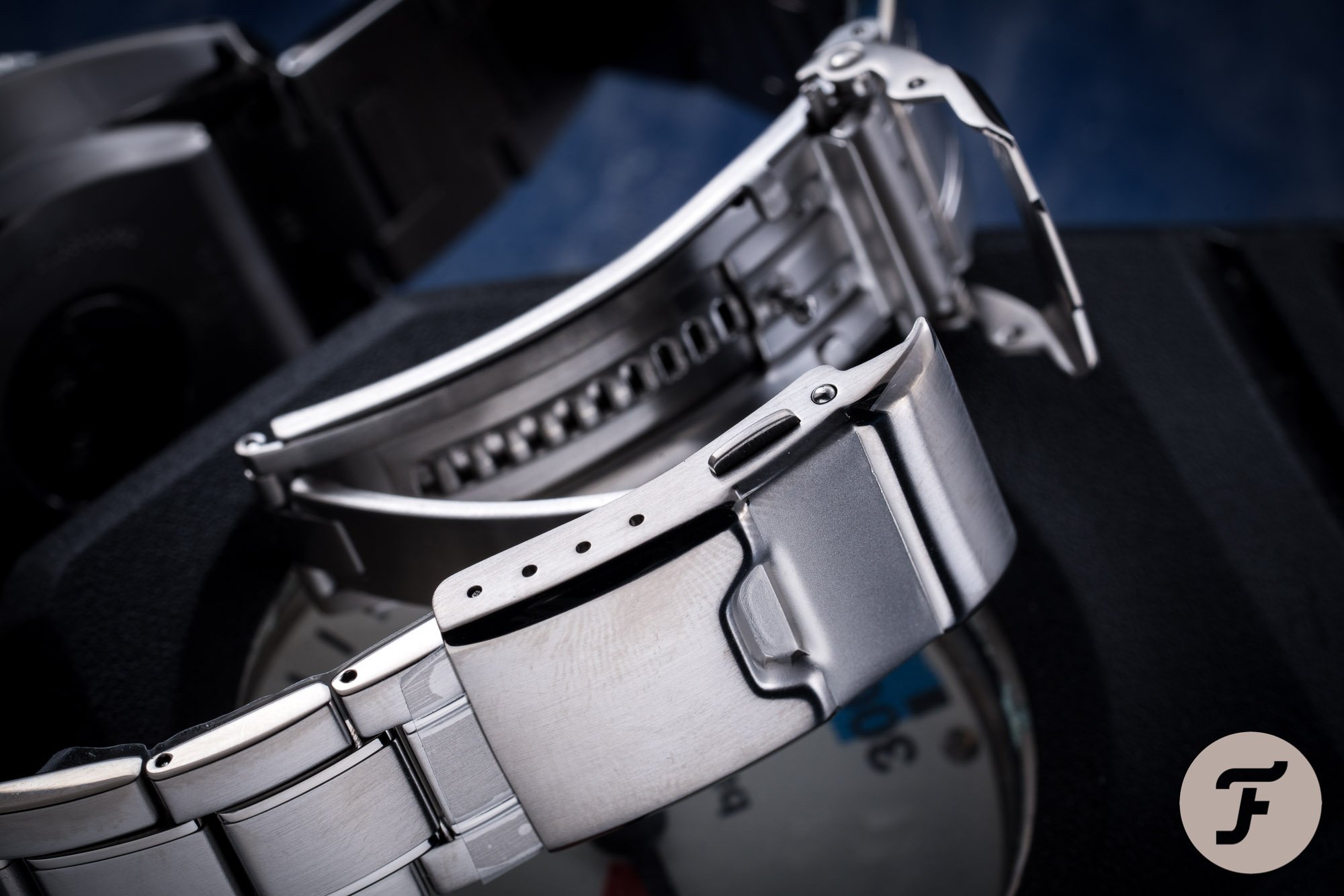 At first sight, this SLA021J1 doesn’t look particularly different from my own Marinemaster 300 SBDX001. Only when you look closer, there are the little differences on the dial for example. Or the fact that this new reference has a sapphire crystal and a ceramic bezel insert. Small things from a greater perspective, as I think this watch is reaching iconic status, but for the fans, these small differences are of major importance. I get that, and therefore, I also believe that the price of €3200 is justified. The former price made everyone go “This watch is great bang for the buck”, so now Seiko increased the price, we should not be crying over it. We always said that this watch was an amazing buy. Is it less amazing now? No, but the updated price point of €3200,- puts this watch into a different perspective. It is now less ‘obvious’ to go with the SLA021J1 instead of that Tudor Black Bay, for example. 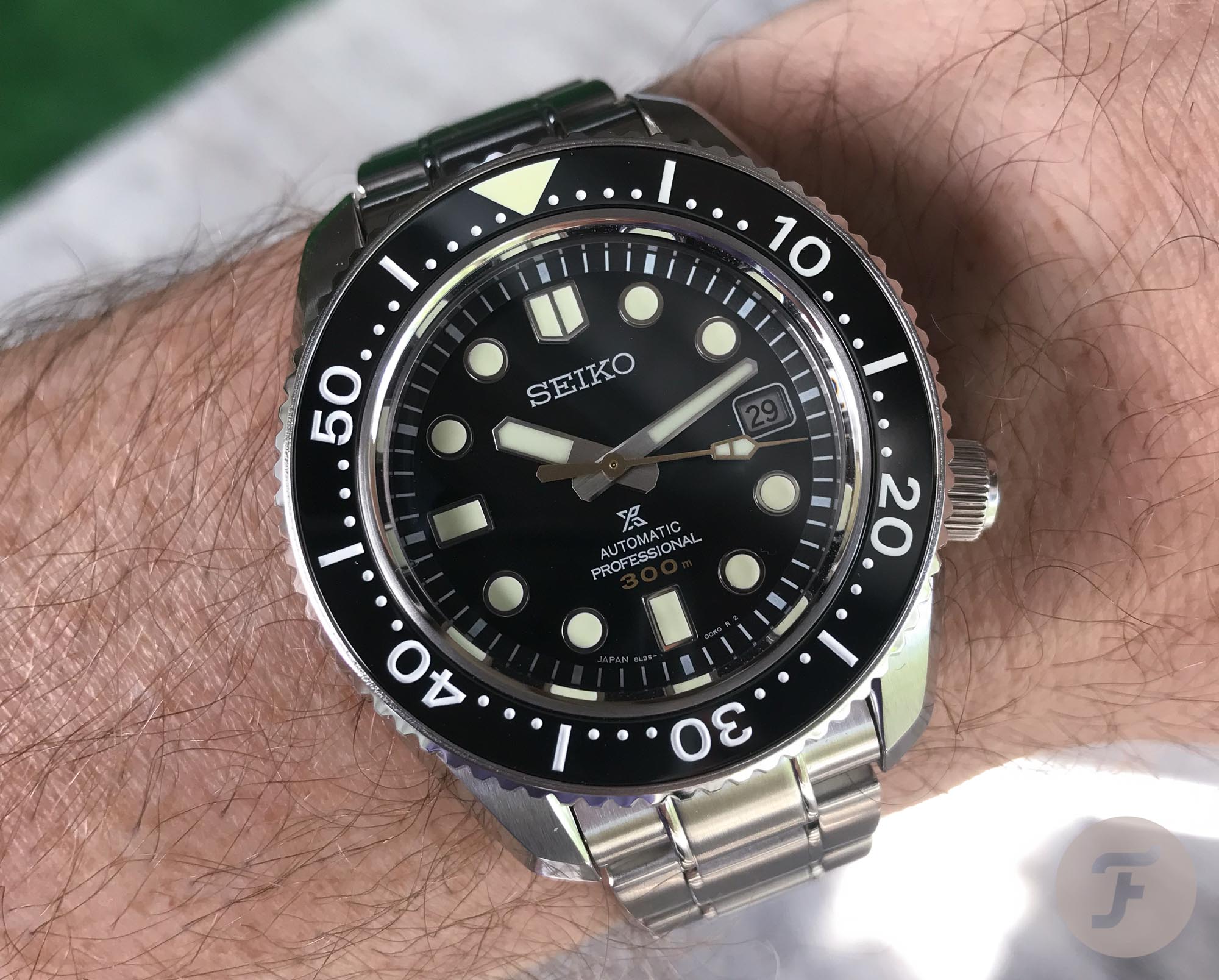 In the end, this watch is a great piece and can be a companion for life. It comes with a nice rubber strap, that feels much softer than the one that came with mine in 2015. It is a worthy successor of the SBDX017, even though the steps are small. But perhaps that’s what makes this watch a future icon.