I’ve mentioned this several times, but I’ll say it again; it’s really easy to find oneself in a rabbit hole when browsing through vintage Seiko models.  The search generally starts with a specific target, but those auction sites just pull you in by offering up suggestions at the bottom of a given listing.  Or, even more captivating, just type a few words into Google images and literally thousands of pictures show up, thereby taking one’s once innocuous wish list and turning it into something the length of a piece of governmental legislation.  Such is life and it’s how I stumbled upon today’s Seiko Seahorse 6601-8830. 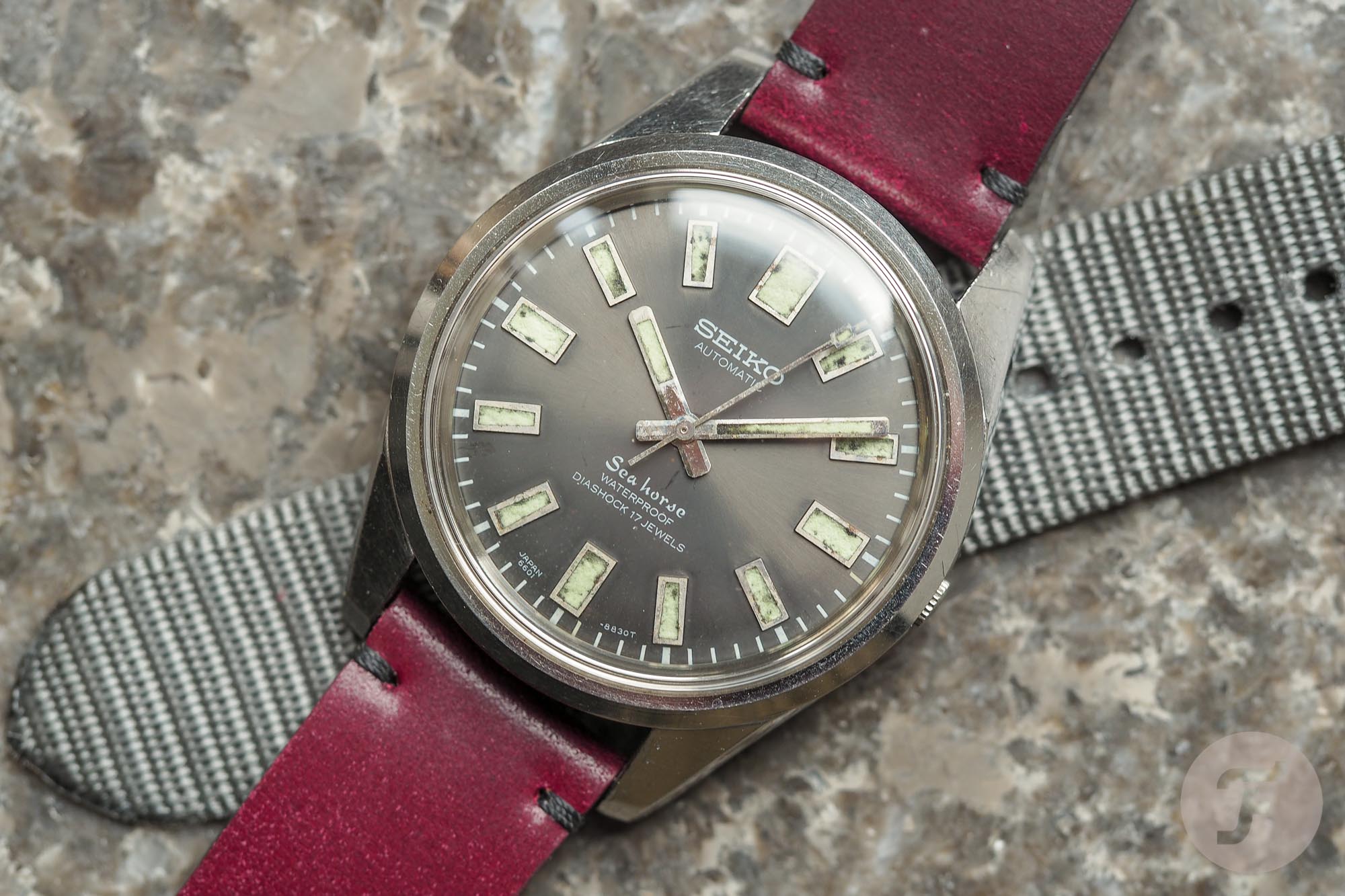 Vintage Seiko – The Options are Endless

It was a normal evening and I was rolling through listings on one of my favorite Asian auction sites when one of those “bottom of the listing” suggestions showed our featured watch, the Seiko Seahorse 6601-8830.  Now, you can imagine that on a phone screen, it was tough to tell what this was without clicking on it and bringing things into focus, but I was immediately drawn to the lumed grey dial.  Of course, once I clicked on it, I was face to face with what resembled a dateless 62MAS, Seiko’s legendary first stab at a serious diver.  But the Seahorse stoked my curiosity because this example was produced in September, 1964, roughly seven months prior to the debut of the 62MAS.  So, yes, your author is one who enjoys completing a theme, so the Seahorse had to be purchased…and so it was. 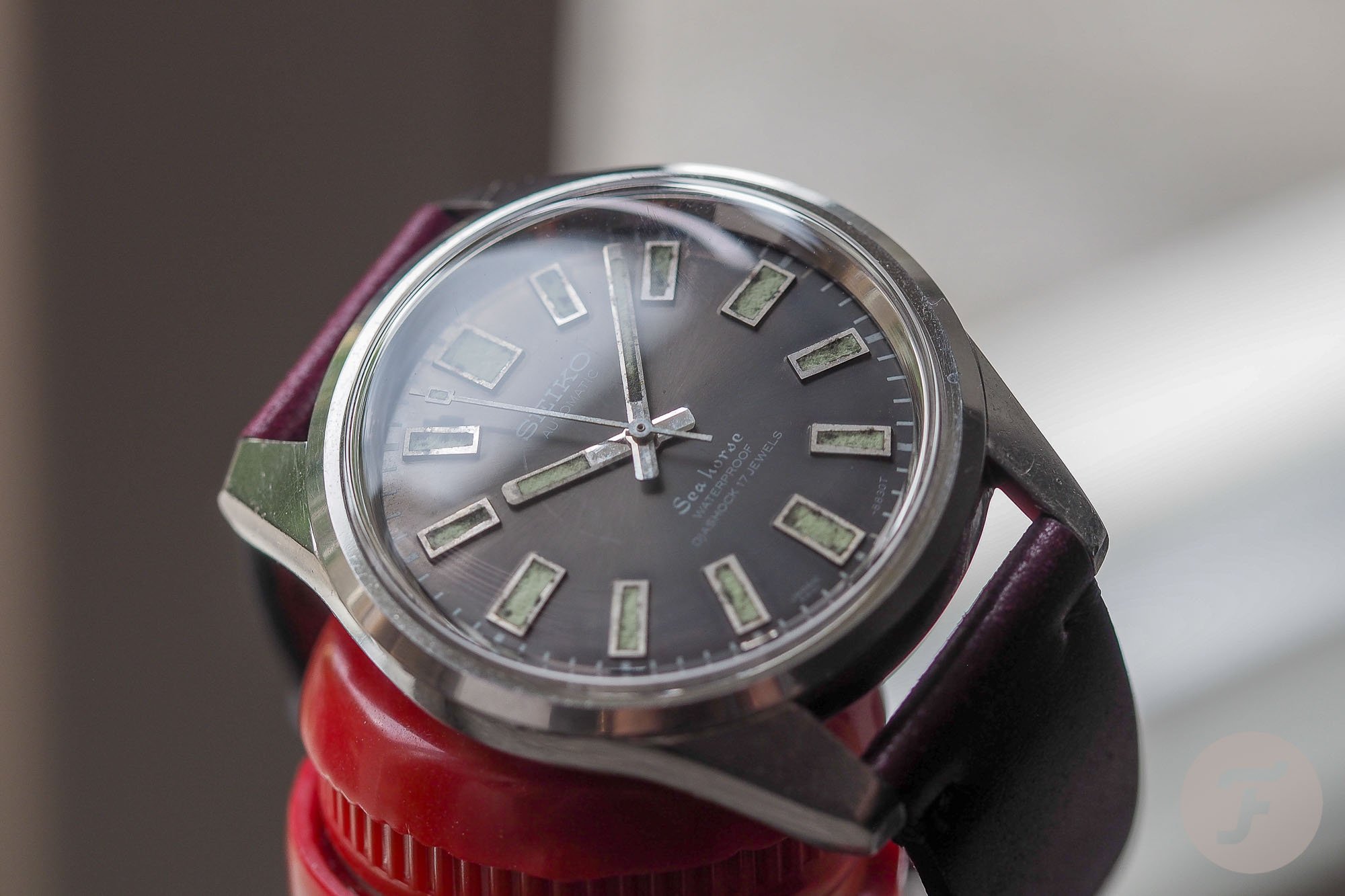 A Little Bit of History

The Seahorse name likely began with Seiko in 1959 as a descriptor on a manual wind Cronos model that featured a screw-down case back and is considered by most as Seiko’s first waterproof watch (see more here).  Rated to 50 meters, the Cronos resembled a dress watch aside from its more robust case closure.  In 1961, the Seahorse name found itself on automatics for the first time and water resistance for the next several years ranged from 30 – 50 meters in most cases.  A quick look under the Seahorse name on the aforementioned Google images or eBay will bring up scads of models with most, again, looking like staid office watches.  But there were clearly some outliers such as the Seiko Seahorse 6601-8830. 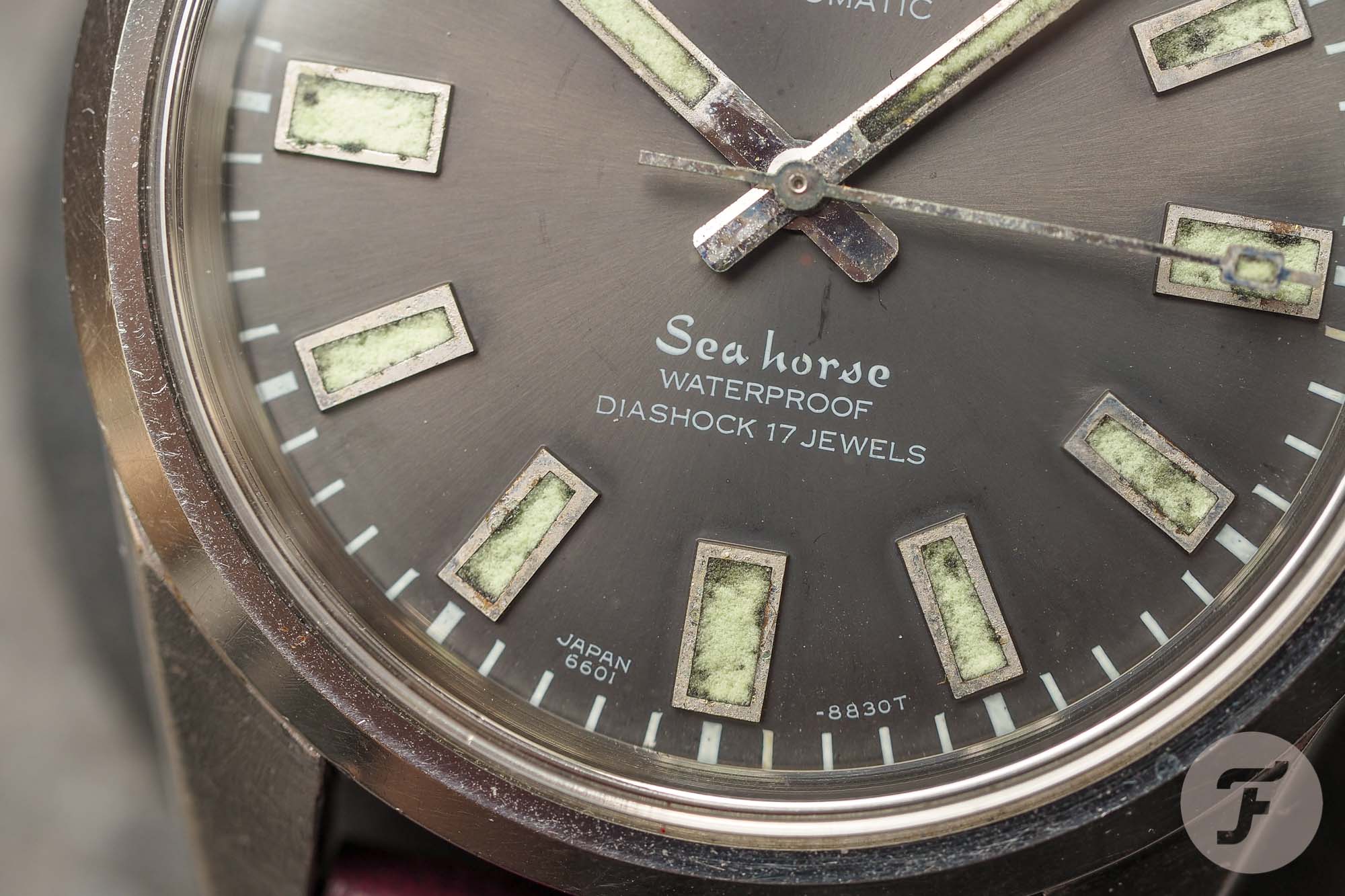 Finding good information, especially in English, on Seiko prior to 1965 isn’t easy.  Prior to this year, Seiko was using a different serial number convention compared to the xxxx-yyyy system that they still employ today.  For sure, asking specific questions on forums will sometimes yield very definitive answers, but getting specs such as crystal part numbers or even finding uploaded catalogs is a chore that sometimes results in a dead end.  With this Seiko Seahorse 6601-8830, there’s not a heck of a lot out there regarding the history of the model other than assuming it was one of many different dial variations that were paired with this roughly 37mm stainless steel case with screw-down caseback. 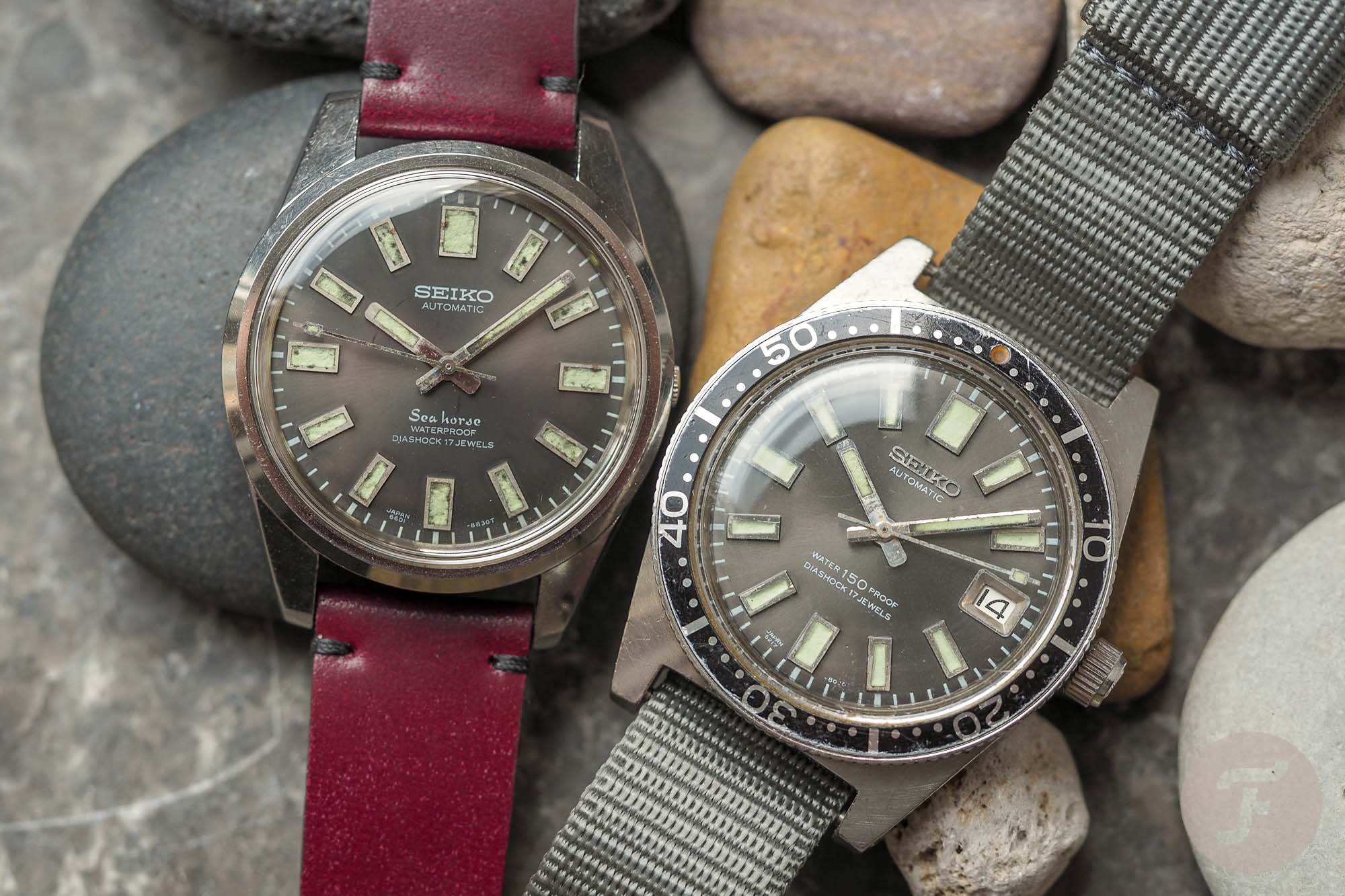 A Precursor to the Famed 62MAS…

As mentioned, what immediately drew me to the Seiko Seahorse 6601-8830 was its dial.  Many of the other watches in this line have nice dials, but they’re often silver or black and lack lume on both the dial and hands.  Aside from having a thing for early lumed dials on Japanese watches containing a modicum of water resistance, I really wanted to bring this piece home to compare side by side with the 62MAS and, as you can see from above, it’s right in line. 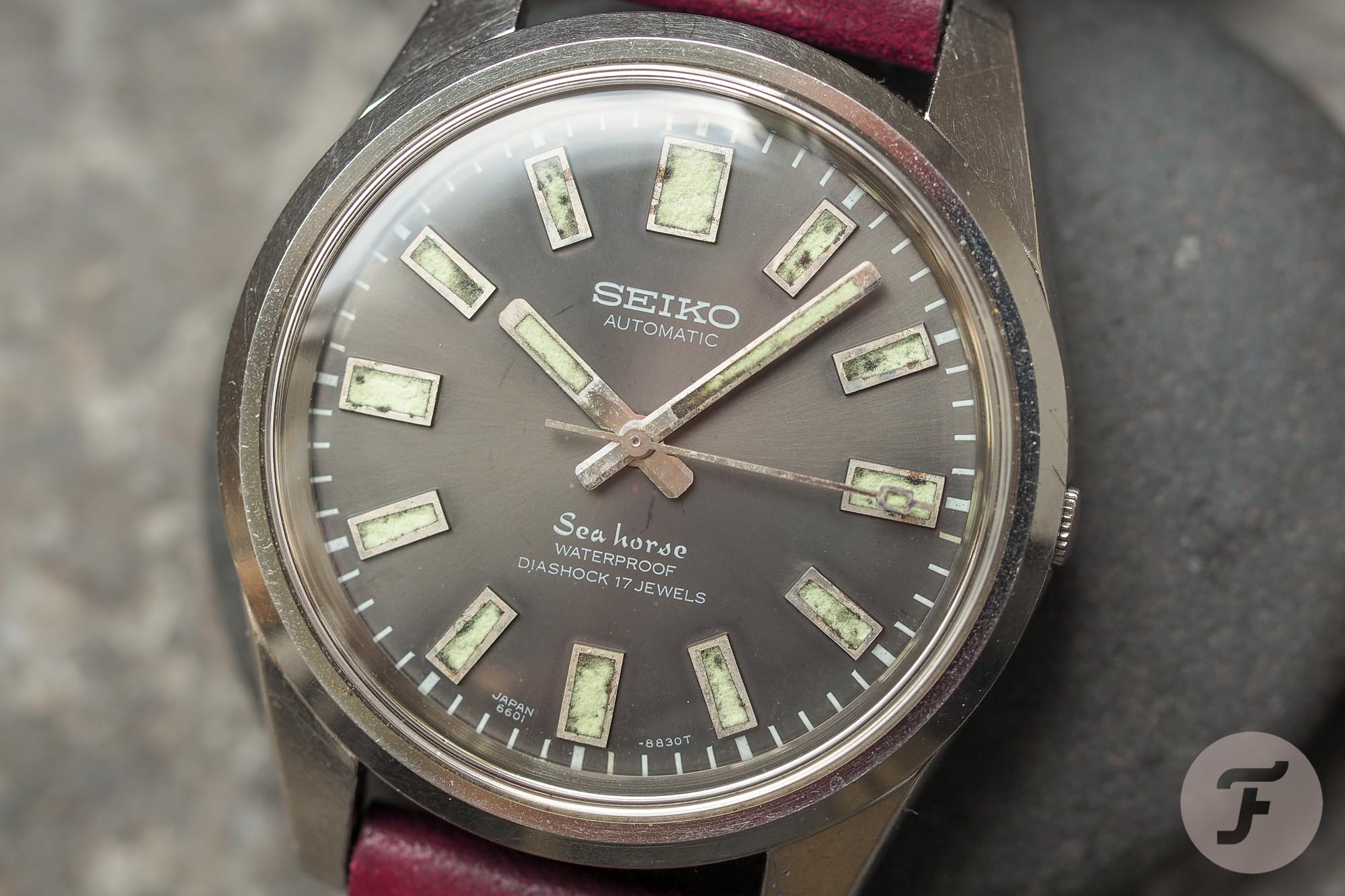 The Seiko Seahorse 6601-8830 contains, at least in my eyes, a slightly darker grey dial with sunburst effect when comparing it to its slightly younger relative.  It’s also adorned with those familiar rectangular indices that contain trapezoidal lume plots.  Here, aside from showing some serious wabi-sabi, we get an extra one as the Seahorse thankfully eschews a date function.  There’s no applied Seiko logo as on the 62MAS and instead, everything shows in white printed writing.  I’m especially fond of the classy Seahorse script above 6:00 as it adds just the right amount of playfulness to the otherwise down-to-business looks.  To round out the familial resemblance to the 6217 diver, the Seahorse makes use of the same rectangular hands and sweep hand with lumed rectangular pip.  As most of us enjoy the 62MAS, it’s hard to find fault with the looks of this slightly older watch. 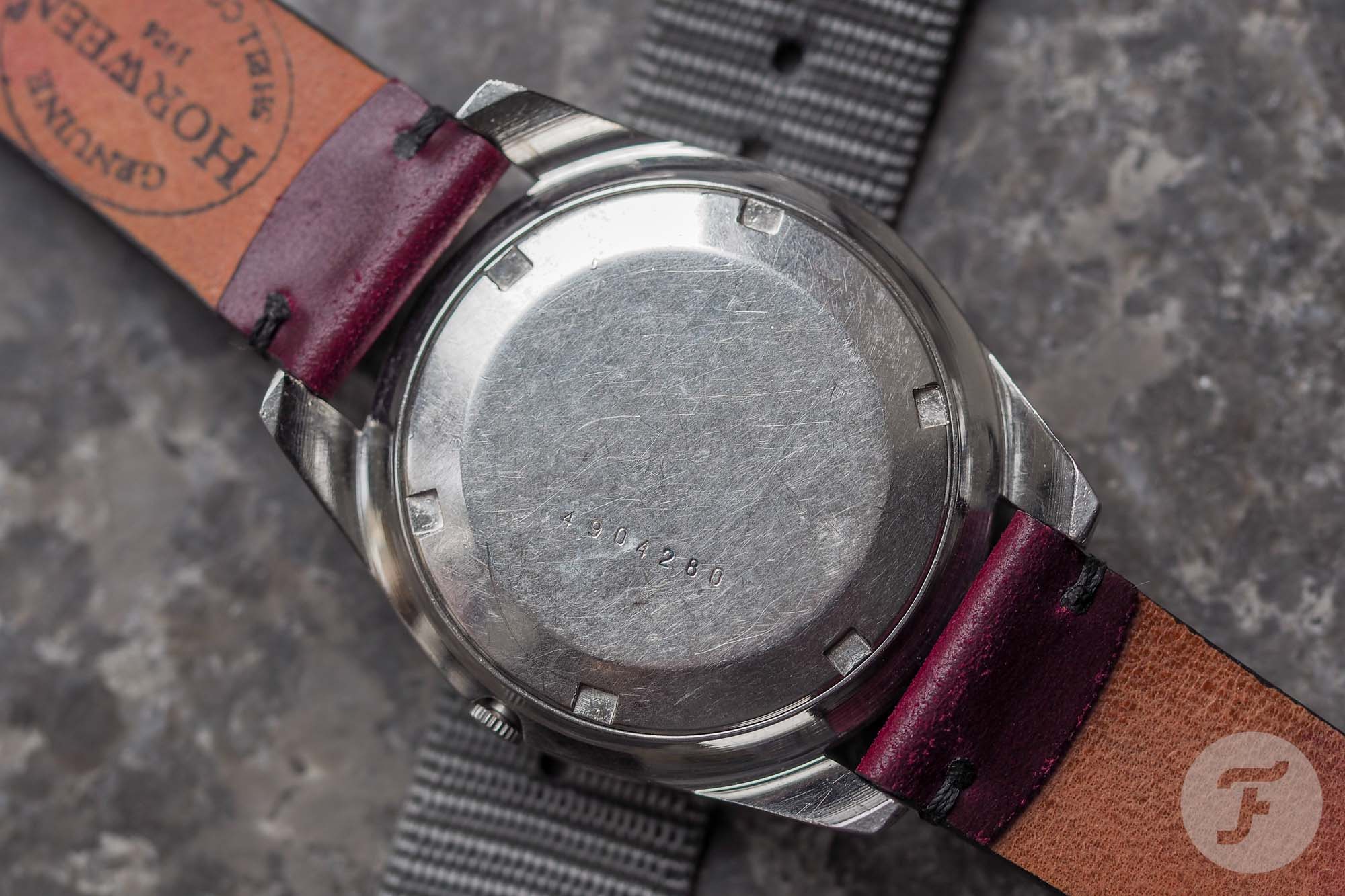 I guess snorkeling or skin diving was the intended purpose of the Seiko Seahorse 6601-8830, or the whole Seahorse line for that matter, but nowadays a watch like this fits the loose definition for a field watch.  With its thick lugs, high domed acrylic crystal, useful water resistance, and screw-down case back, it seems more appropriate for that type of duty.  Speaking of the case back, you’ll note that aside from the date, this one has seen some serious wrist time during its nearly 55 years on the planet.  Under the right lighting, angle, and magnification, the Seahorse name, logo and other information can still be found, but it’s not easy.  Sadly, Seiko used some very shallow inscriptions on the bulk of its watches during this period, so finding a well-preserved case back is a real chore. 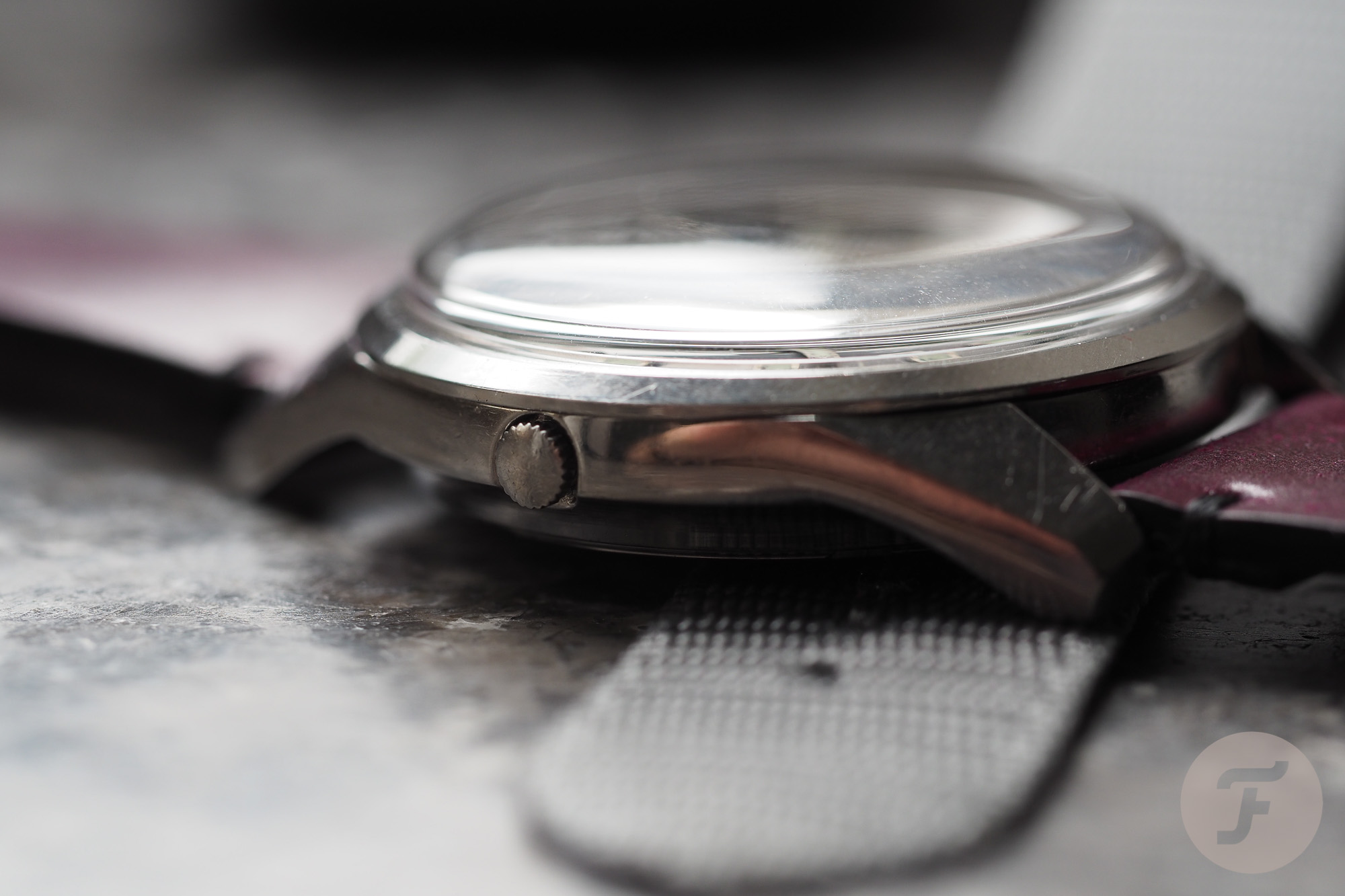 The Seiko Seahorse 6601-8830 doesn’t jump out as 37mm – it looks a touch smaller due to the lug to dial proportions – but it wears beautifully.  With what I think is a perfectly paired 18mm burgundy shell cordovan strap, this is a striking watch that grabs attention.  Inside, we find the Seiko 6601 caliber automatic, which is a 17-jewel movement that runs at a leisurely 18,000 bph pace.  The small flush-fitting crown at 3:00 is a sure giveaway that the Seahorse can’t be manually wound, but it’s of little consequence because simply picking this watch up sets the movement in motion. 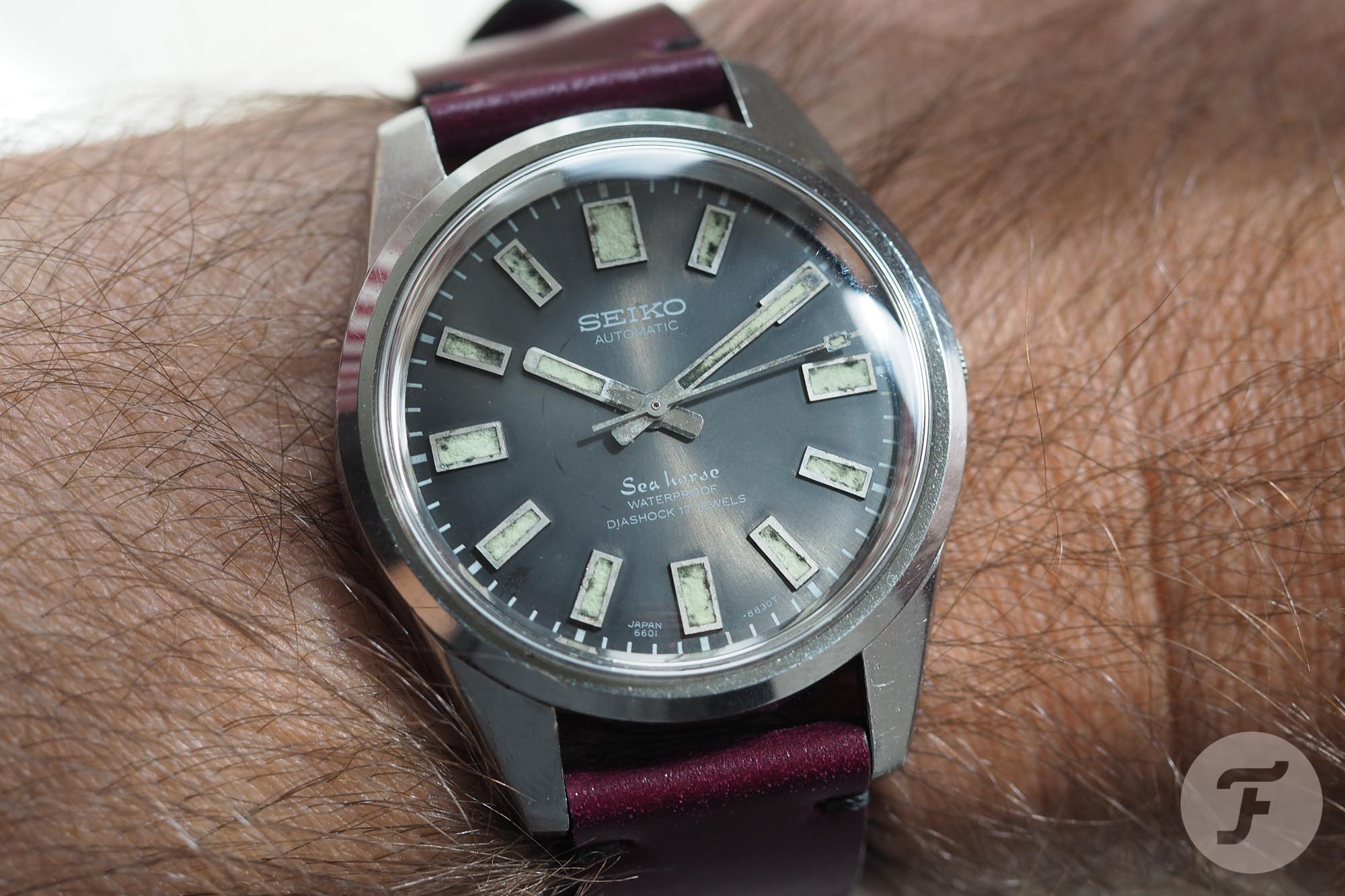 Not an Easy Find…Or Cheap

Finding a Seiko Seahorse 6601-8830 isn’t easy and I recall seeing very few on the internet to use as a basis of comparison when I was considering bidding.  So, that’s an issue, but these are also relatively expensive for a watch you’ve probably never seen.  Whereas Seahorse models with the same case, but different dials can be picked up for under $200 in nice shape, figure on $750 – 1,500 for a piece with this dial.  That’s not a small chunk of change, but the resemblance to the 62MAS paired with the screw-down stainless case are the primary culprits at work. 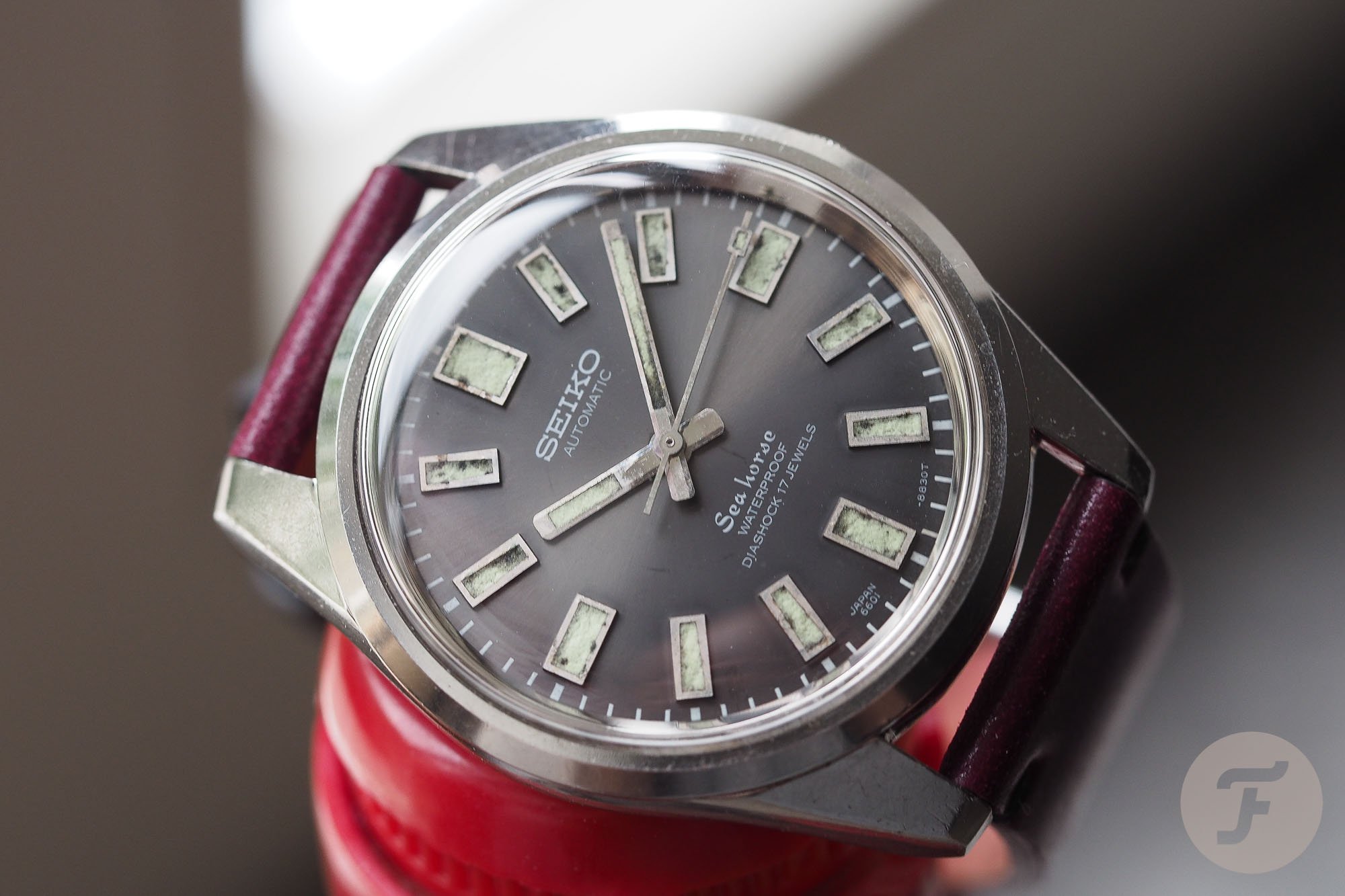 There are other Seiko models featuring dials somewhat similar to the 62MAS, but some have chrome cases.  We also took a look at a 6619 reference with 62MAS hands, so there are definitely cheaper options out there if you’re looking to grab essences of the iconic diver without spending thousands.  As in the case of this Seiko Seahorse 6601-8830, sometimes looking aimlessly results in finding something special.