We’re back with another look at a vintage Seiko. Today, we’ve brought an early pair of sporty watches known as the Seiko Champion J13040 to the party…

By now, you’ve hopefully come to expect a regular dose of vintage Japanese goodness here on Fratello. Well, today is no exception and we bring you the Seiko Champion J13040. Like so many late ’50s and early ’60s Japanese watches, these examples exude simplicity. However, they bring in just enough detail to make them memorable. Thanks to those little things, this pair made it to my collection. 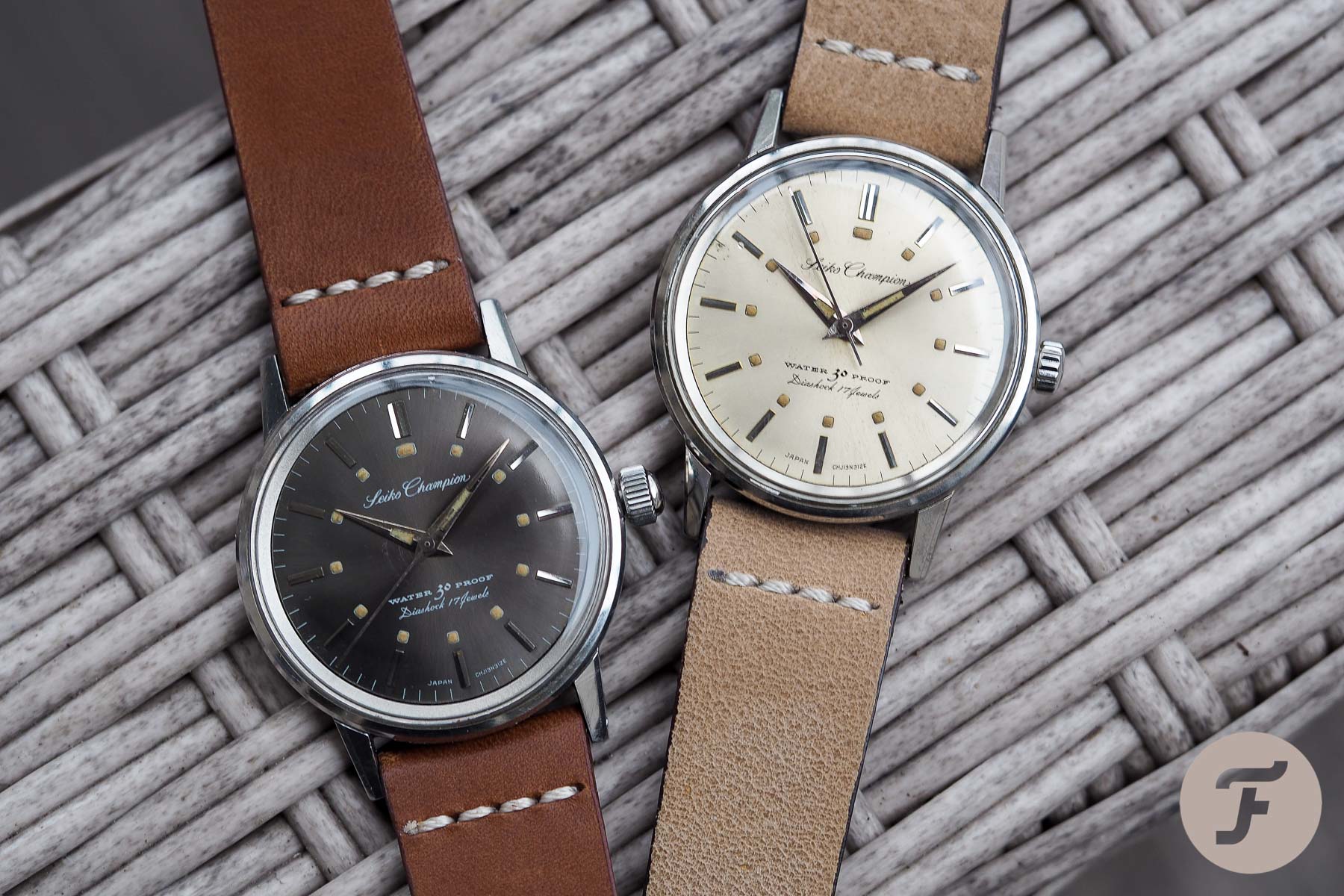 Just a few short weeks ago, I showed you the Seiko Dolphin J13035. That watch added a touch of water resistance to an otherwise dressy package. Today’s Seiko Champion J13040 models are from the same early ’60s period yet they turn up the sport factor just a notch. I mentioned in that article that Seiko had several different lines and sub lines underneath those. The Seahorse subline was one such example and in today’s models, it just so happens to sit within the Champion line. As this informative post tells us, the Champion line debuted in 1960 as a low cost group of manual wind pieces. As an aside, you’ll also recall that the lovely sector-dialed Alpinists fell within this grouping after moving from the Laurel line. Yes, it seems Seiko has always been fixated on somewhat complex naming conventions. 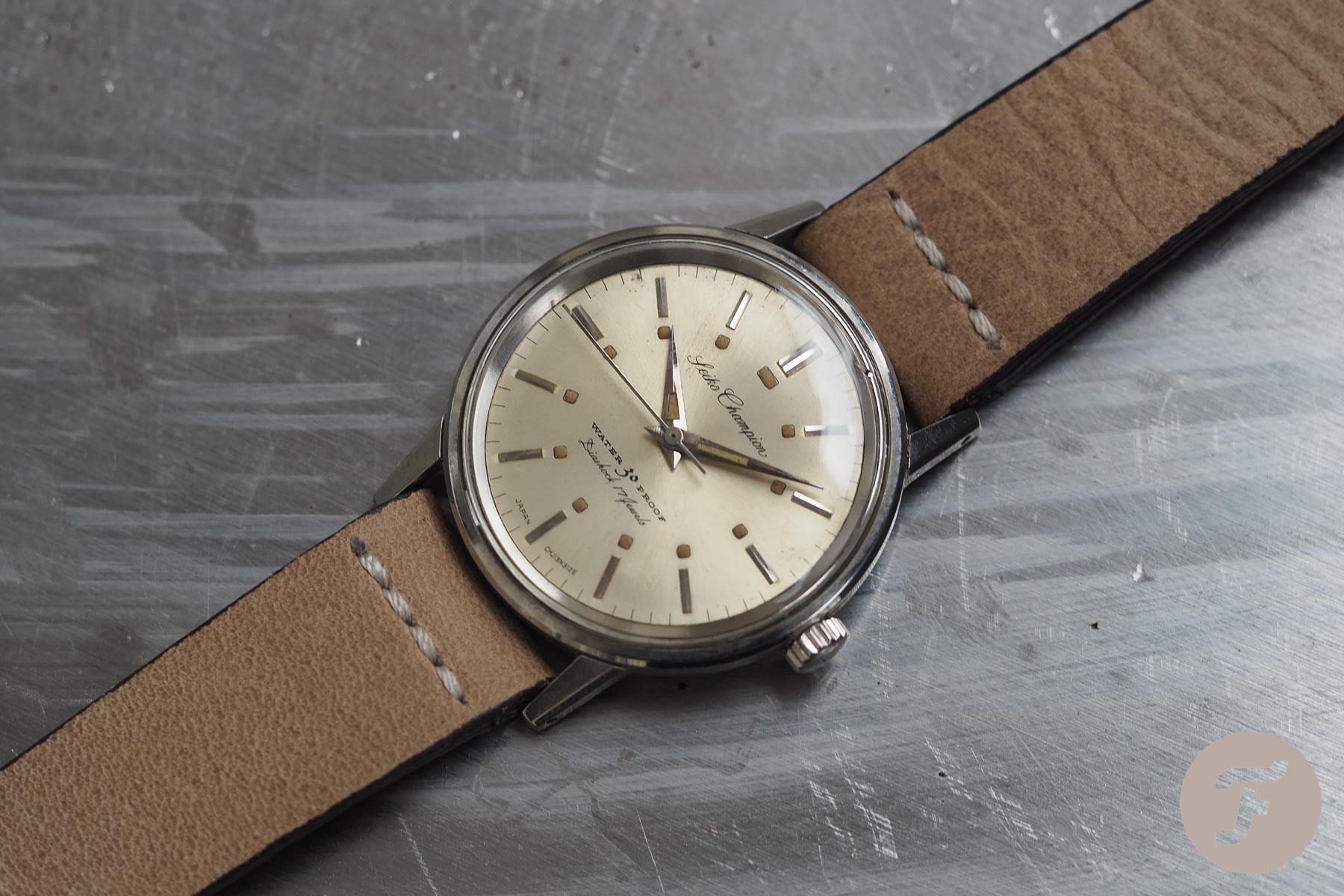 What you’re looking at with the Seiko Champion J13040 are fully stainless steel 35.5mm models. Off the bat, that may not sound so compelling, but the slim polished bezel gives the watch a larger look. Instead of the typical 18mm lug width, Seiko chose 19mm and that gives these watches additional presence on or off the wrist. Apparently, these came on beads of rice style bracelets, but they’re incredibly rare to find in decent shape. 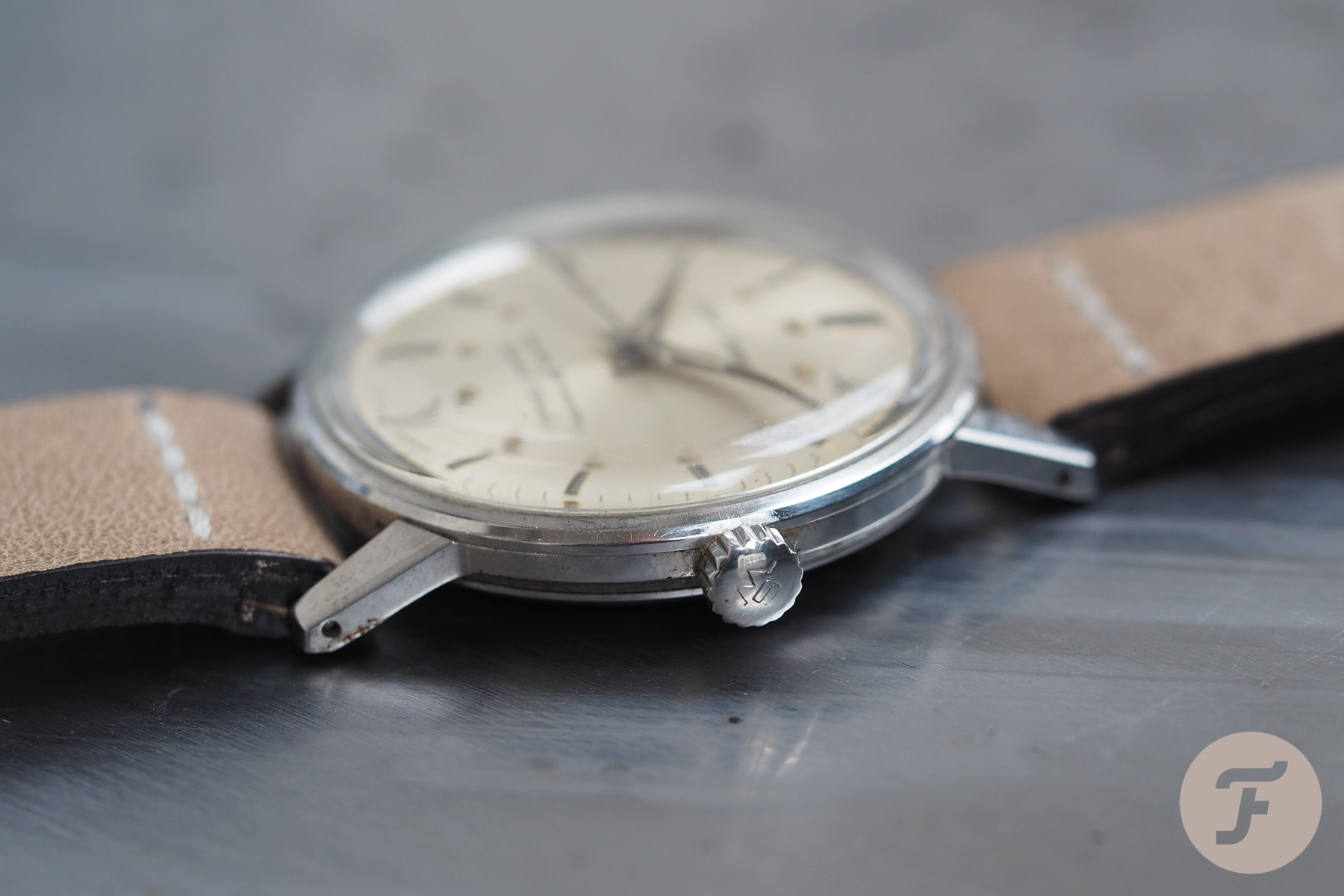 As is normally the case, it’s the dials that led me to the Seiko Champion J13040. In this period, the Seikosha movements were simple and robust. In what must have felt like a demerit at the time, these movements lacked a date complication. That’s a long way of saying that we’re now thankful for this lack of technical development because it resulted in some perfectly symmetrical dials. Just look at these lovely watches up close! 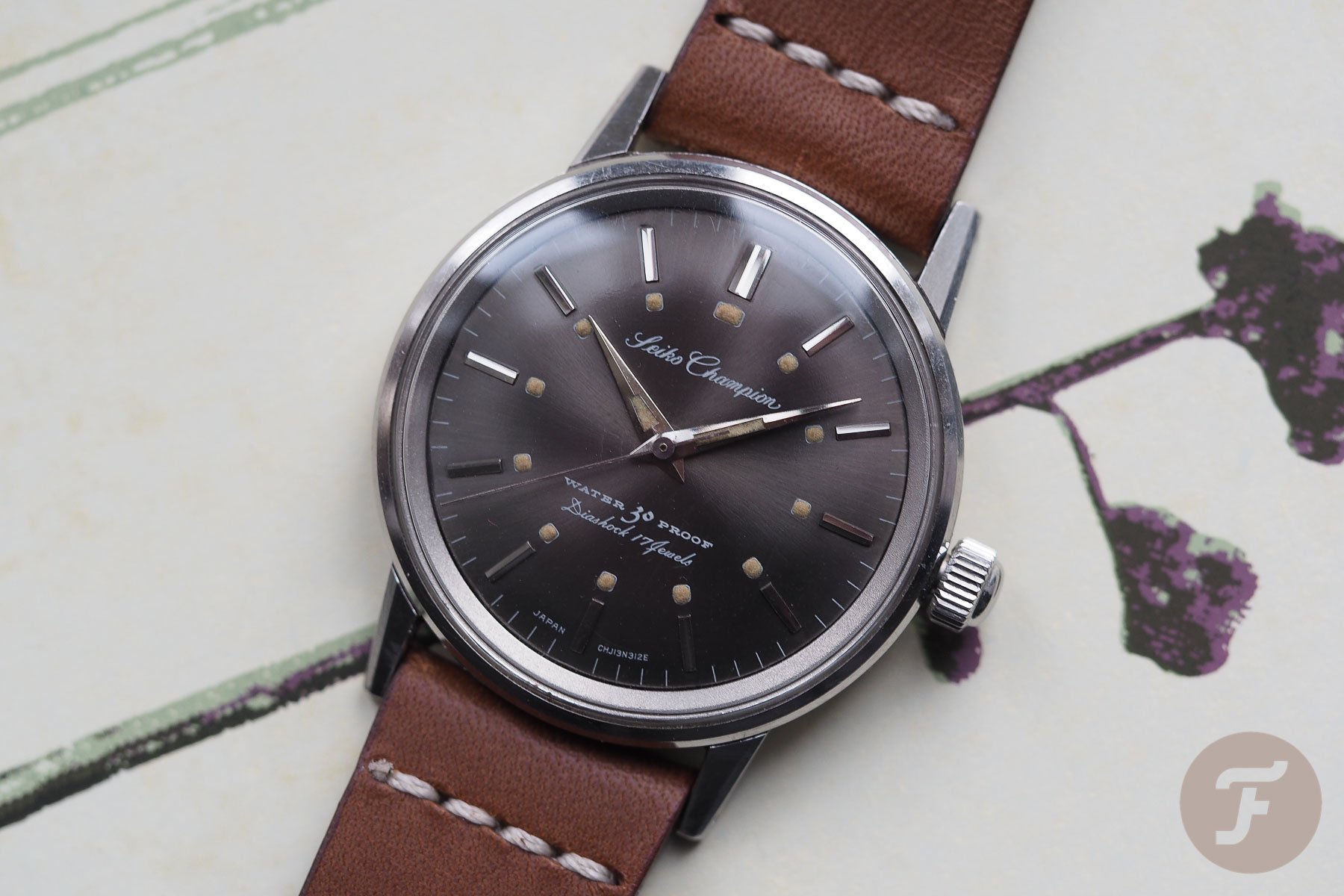 Smiles for miles with these wonderful dials

The Seiko Champion J13040 came in loads of varieties during its production period. Later models added a couple jewels and the Seahorse name to the dial. We also saw font changes and a spot of blue color for the depth rating at some point. For my money, though, I like these earliest pieces with their mix of cursive and block letter fonts. The italicized swagger on that “30” almost makes the user want to test its limits…almost.

Seiko made these models in either lumed or non-lumed formats and you can guess which format I prefer. As far as I know, a lumed dial should have lumed hands and combinations represent later modifications. Note the little glowing squares present within the inner circumference of the applied indices and how they line up perfectly with the end of the lumed dagger hour hand. 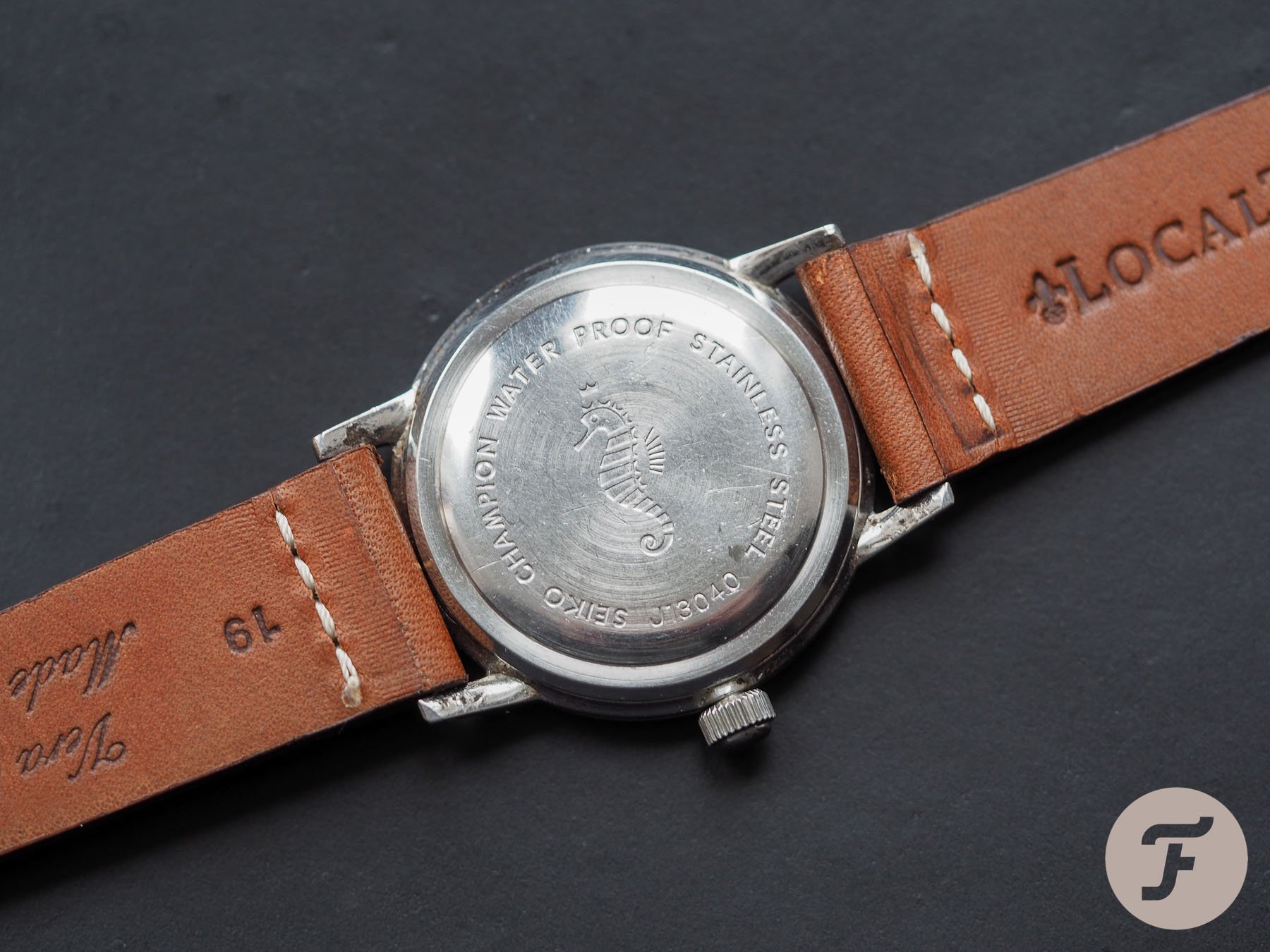 As is almost always the case, these Seiko Champion J13040 pieces bring other likable qualities. A de rigueur domed acrylic crystal joins sharp, angled and cross-drilled lugs. A simple crown (the silvery dial contains the correct model) makes hand winding an enjoyable affair. However, just like on the recently discussed Dolphin, the engraved snap case back is almost worth the price of admission on its own. Aside from the typical writing, we get a nifty Seahorse smack dab in the middle of the case back. For those who may be wondering, these watches were produced before Seiko began putting the serial number on the outside of the case back. These watches contain such information on the inside. 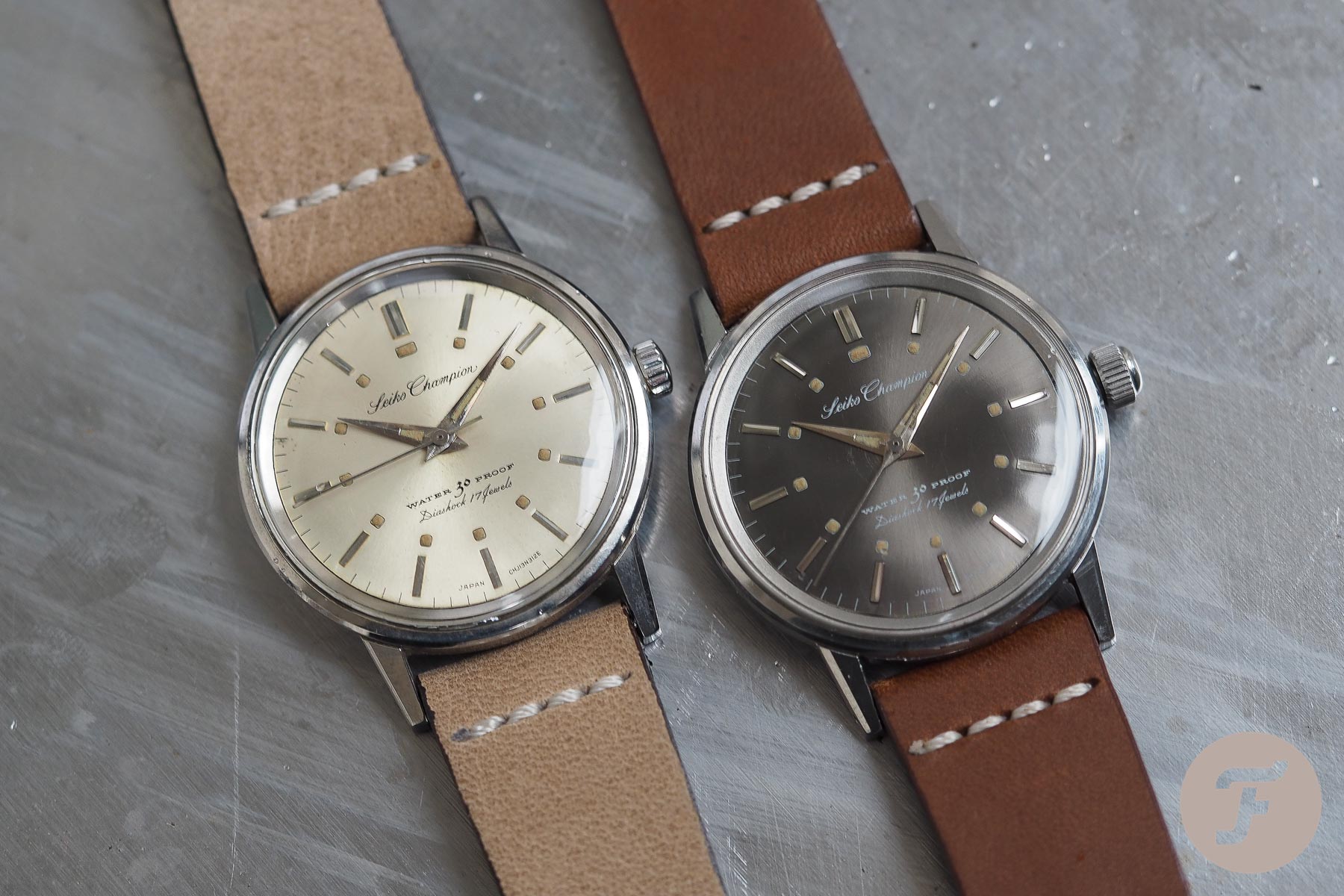 I’m not sure which dial color I’d choose if I could only have one Seiko Champion J13040. The silvery dial looks a little larger due its lighter hue. On the other hand, dark dialed Seiko models with lume from this period are much rarer than models from contemporaries such as Citizen. Regardless of which you choose, know that you’re getting a classic that looks fantastic with just about anything.

Of course, finding one of these can be challenging. Prices on eBay range from ok to ridiculous and one must watch out for missing bezels and stained dials. Also, keep in mind the comment about finding a watch with lumed dials and hands or no lume at all. Like all watches from this period, be on the lookout for redials and relumes. These J13040 models are somewhat popular with collectors and, therefore, I’d set aside anywhere from $250 all the way up to $750 depending on condition and bidder interest. You just never know how vintage Japanese watches will perform in some auctions. 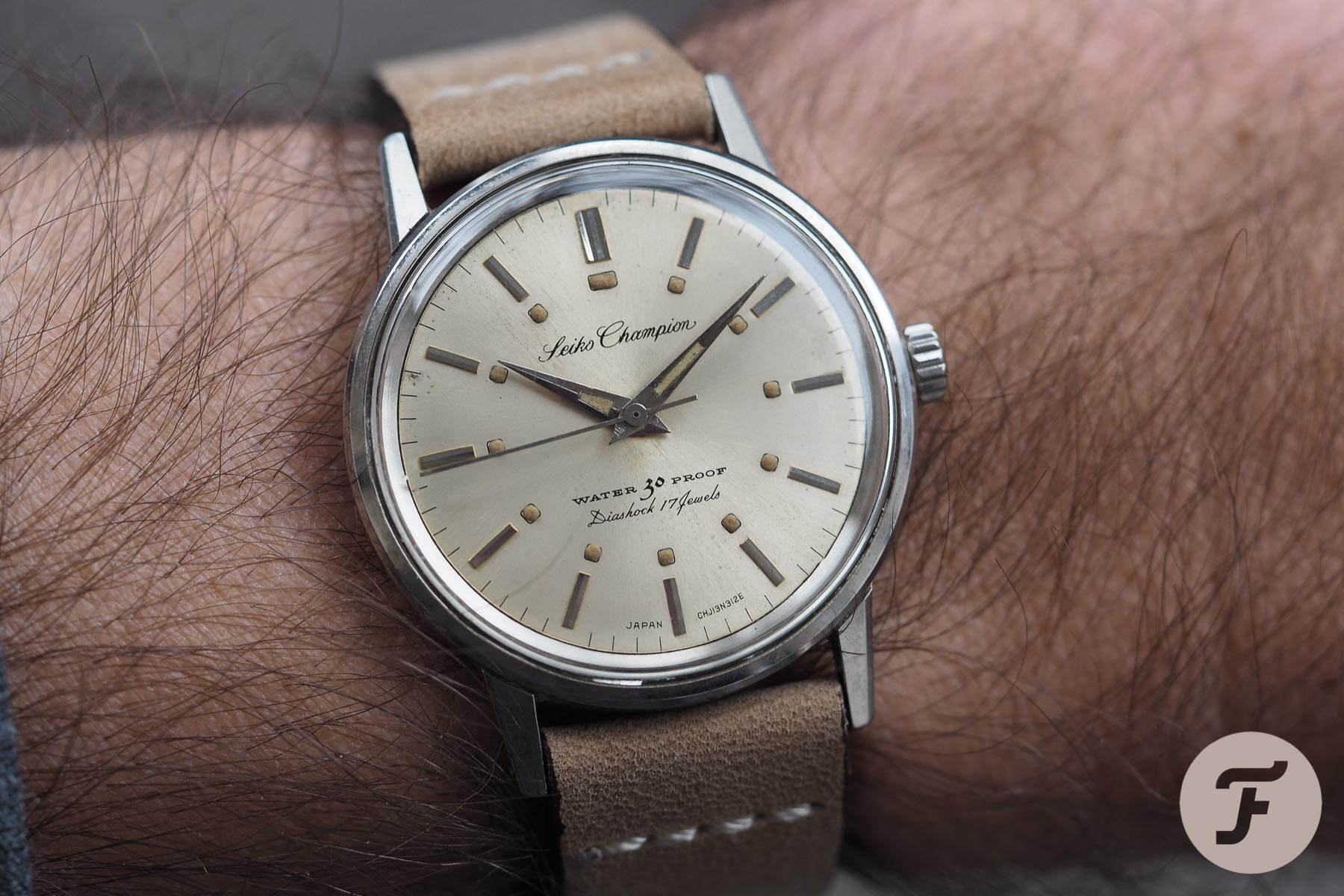 The Seiko Champion J13040 may not have set any diving records or scaled any mountains, but it remains as a great example of early ’60s watch design. There’s enough happening to make these watches interesting, but that quiet restraint makes them everlasting. Enjoy the hunt and let us know what you think of these lovelies below…

Hot Topics
Introducing: The Omega Speedmaster Super Racing With Spirate System
162 comments
Design Vs. Specs — Which Is More Important To You When Buying A Watch?
86 comments
The Time To Buy Is Now: How The Current Economic Climate Influences Watch Buying And How You Should React
51 comments
My Predictions For New Omega Speedmasters In 2023
48 comments
A Regret-Free Guide To Buying Your First Luxury Watch — Part Three: Higher-End Options From Omega, Rolex, Grand Seiko, And More
48 comments
Popular
Rolex GMT-Master History And Overview Of All Major References
Robert-Jan Broer
21
#TBT Top Vintage Seiko Divers – They’re All Here!
Michael Stockton
16
Why Are There No Stainless Steel Rolex Watches Available?
Robert-Jan Broer
121