Before The New Seiko SLA033 Is Officially Announced, We Look At The Original Seiko 6105-8110

Word is out that Seiko will be releasing a new diver on this year’s Baselworld, based on the iconic reference 6105. According to some sources, it will be the Seiko SBDX031 / SLA033 reference. It might be a bit like the re-edition of the Seiko 62MAS that resulted in the SLA017 (click here for a 62MAS vs SLA017 comparison). We hope that the price tag will be a bit lower on the new Seiko SLA033 than it was on the SLA017, or a bit more accessible, as the leaked image we saw on Instagram looked very good. If the price is good, it will tick a lot of boxes for many Seiko enthusiasts.

We thought it might be a good idea to look back on the original Seiko 6105-8110 reference, that we initially published in 2015. It will give you some background information on the new Seiko Prospex SLA033 / SBDX031 to come, and might even increase your appetite for the new reference. Or to get one of the vintage 6105-81110 watches. Without further ado.

There’s always a beginning to the story: something that draws one’s interest to a certain brand. This article relates to that beginning, for me at least, and highlights a popular watch in vintage circles outside of just those who admire the brand name on its dial. It’s a watch that has gained interest amongst fans of divers, military pieces, movie-related timepieces, and, most commonly, admirers of vintage Seikos. 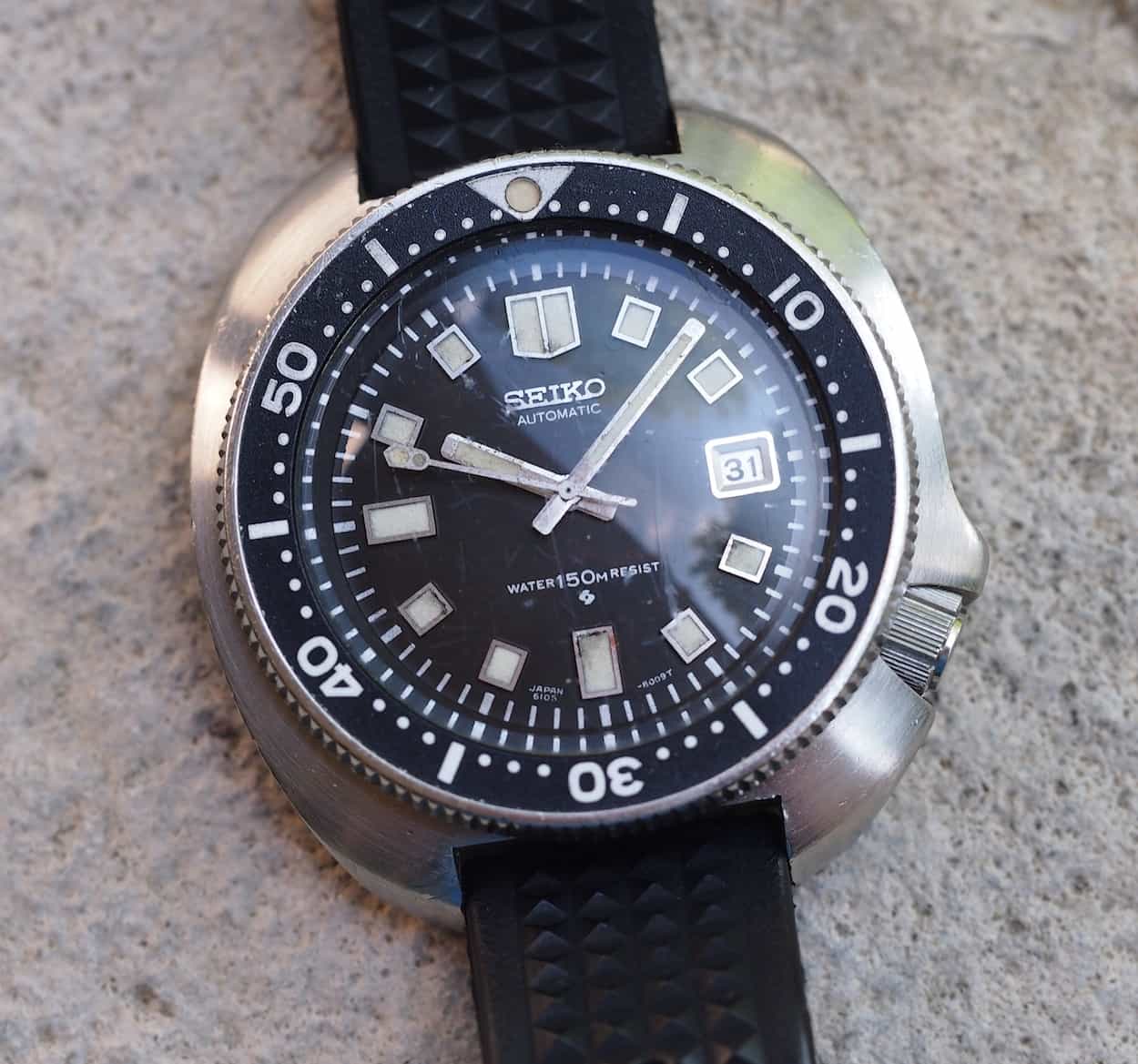 Sourced In The Philippines

The Seiko 6105-8110 is the watch that drew me into vintage Seiko. I can’t quite remember how I stumbled upon it, but I can recall seeing it 4-5 years ago, looking at it on eBay and then moving on to something else. I had not really read enough about Seiko at that time and wasn’t compelled to spend decent money on what I considered to be a fairly pedestrian brand. Somehow, I kept running across the watch on various forums and I decided to start doing some reading. Ultimately, I decided that I wanted one in my collection and set about finding the right example. After a couple months, I located one on the SCWF from a seller in the Philippines (yes, good sellers do exist there) and I made the purchase. The watch then took its time getting through German customs (at least a month) before finally arriving on my desk. Needless to say, I was impressed. 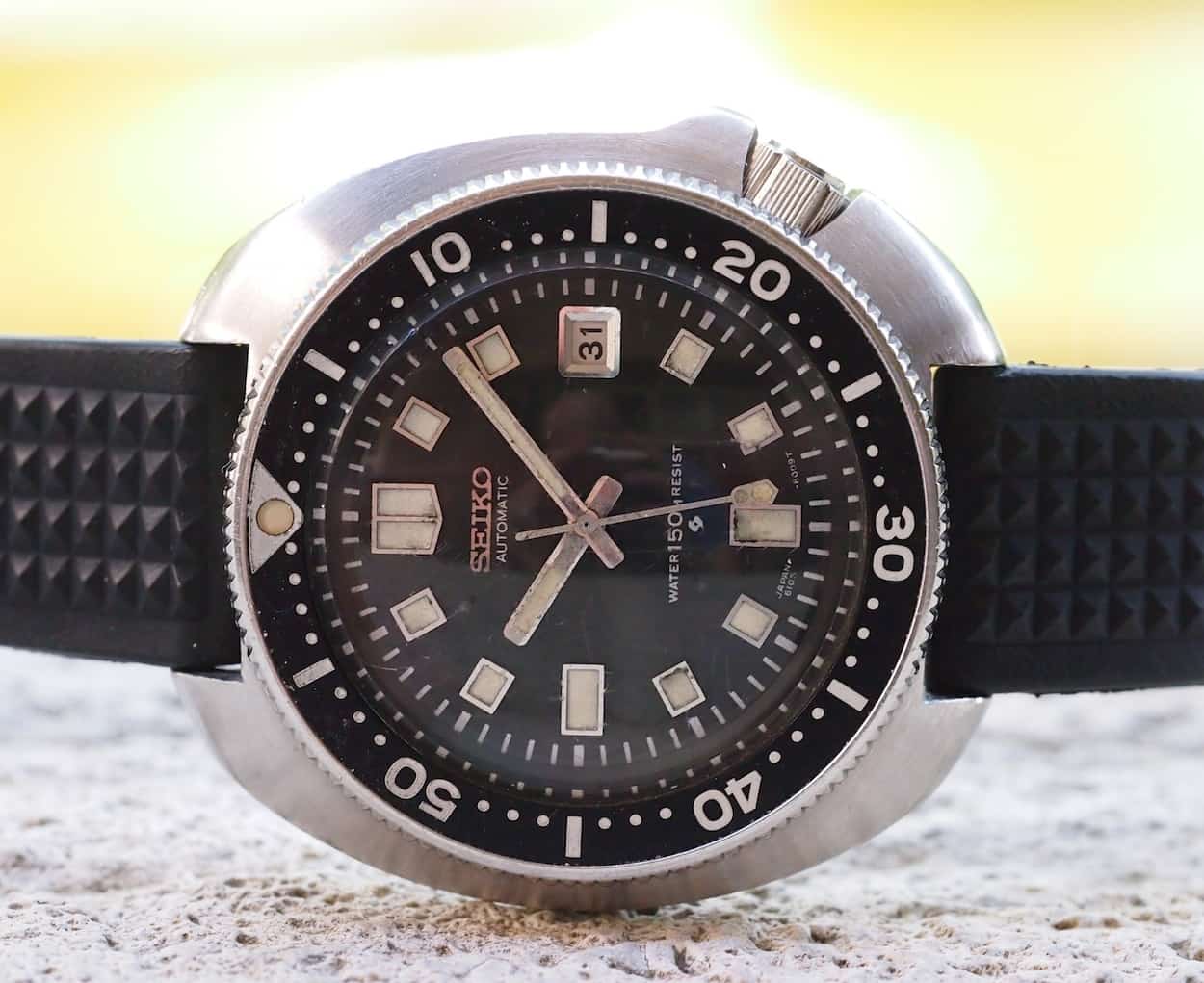 The Seiko 6105 series replaced Seiko’s original professional diver, the 62MAS, in 1968 and was produced until 1977. In its first execution, it was produced with a clean, symmetrical case. About midway through its production cycle, it was replaced by the asymmetrical piece you see here. The case design is notable as it sets the tone for large, slab-like, case to be seen later on the beloved 6306/6309 series. Additionally, it represents Seiko’s first asymmetrical case, creating integrated crown guards that, stylistically, are seen up through today’s SKX007. 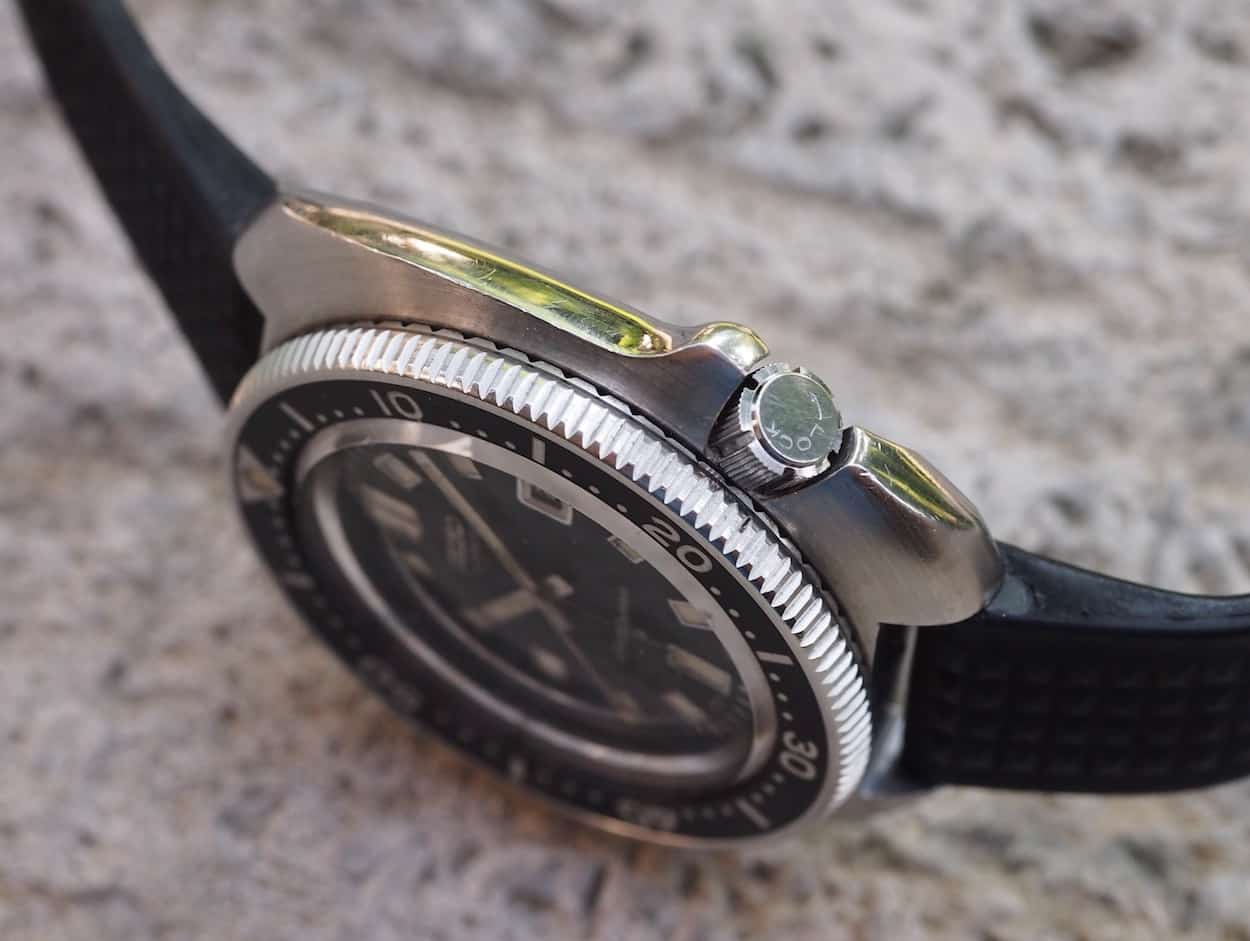 The Seiko 6105 comes in at an impressive 44mm in diameter and features a 17 jewel automatic running at 21,600 bph. It has a quick-set date does not hand-wind due to Seiko’s magic lever system. It claims a water resistance of 150 meters and has a bi-directional rotating click bezel. The crystal, as the scratches clearly show, is Seiko’s in-house Hardlex mineral glass. Lug width is 19mm. The crown, in lieu of a screw down method, uses a turn and lock system that is unique to this model; its functionality and longevity was clearly seen as questionable versus traditional screw down crowns. The case-back is screw down per the typical manner. 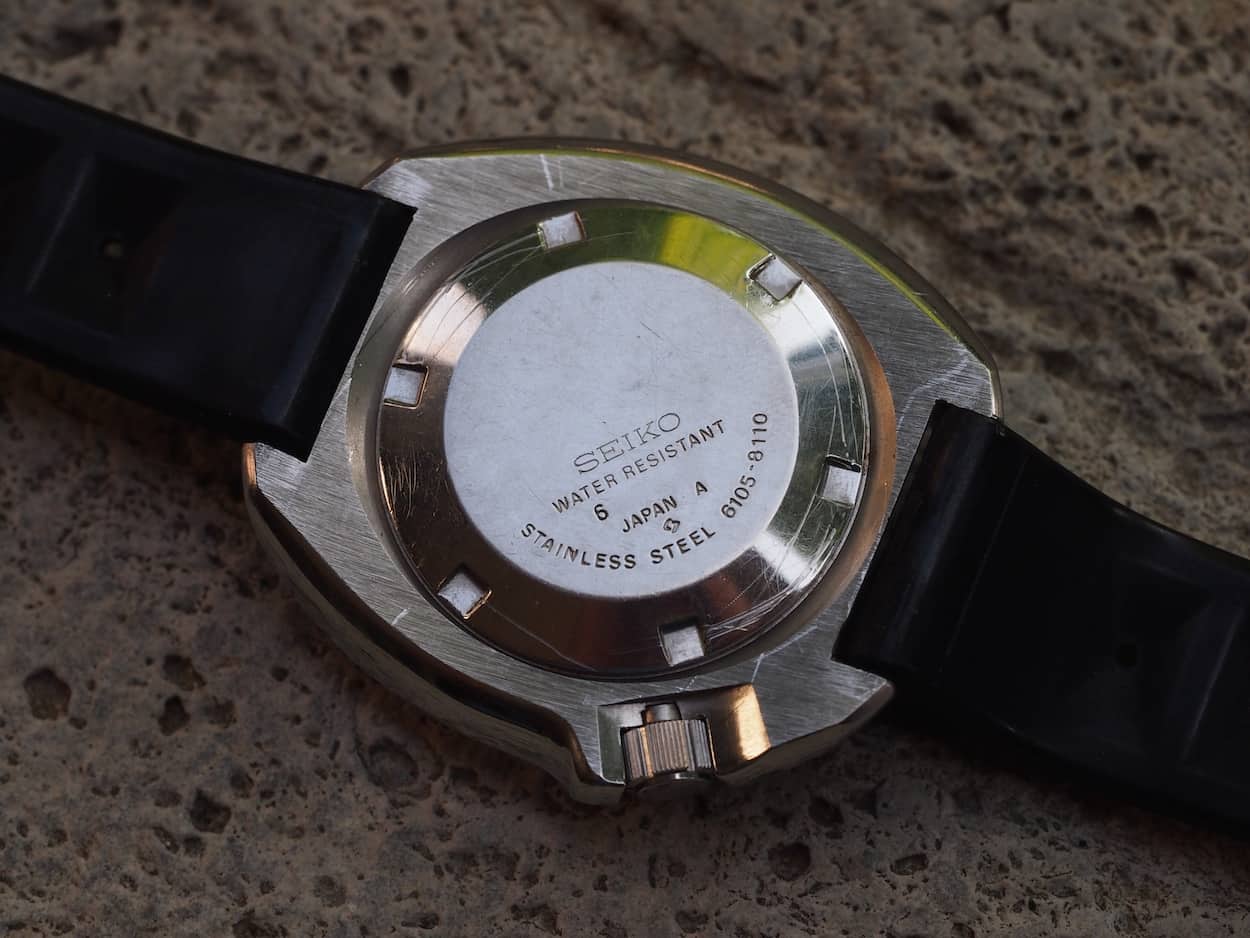 Finishing on the Seiko 6105 is impressive and uses a matte finish on the top of the case and polishing on the sides. In fact, the case, overall, is impressive. From almost every angle, there’s a lot happening and it has an almost organic, amoebic, feel to it. It’s very 1970’s, but in a good way if that makes any sense. The dial is business-like with applied indices that are filled with lume. It contains minute markers outside of the indices that are mimicked in a chapter ring that slants up towards the crystal. It should be noted that this chapter ring, which was also found on the first execution 6105, is still present today in Seiko’s dive watches. Hands are extremely basic and well designed as rectangles with lume. The sweep seconds hand, though, is where it gets interesting. It’s a basic spear until the endpoint where it’s capped off with a unique shape and what was previously a red-filled dot followed by a dot filled with lume matching the rest of the dial. It’s a hallmark of the model that stands out whether the red has faded beyond recognition or not. One final note regarding the dial is its restraint when it comes to verbiage. Seiko placed its name on the dial using applied chrome and then printed “Automatic”, water resistance and the Suwa symbol in white. It’s a case of “less is more” and is simpler than the 62MAS before it. Finally, the classic Seiko bezel is updated from the 62MAS by introducing a triangle at 12:00. Here again, the same bezel is with us today and is great in its simplicity. 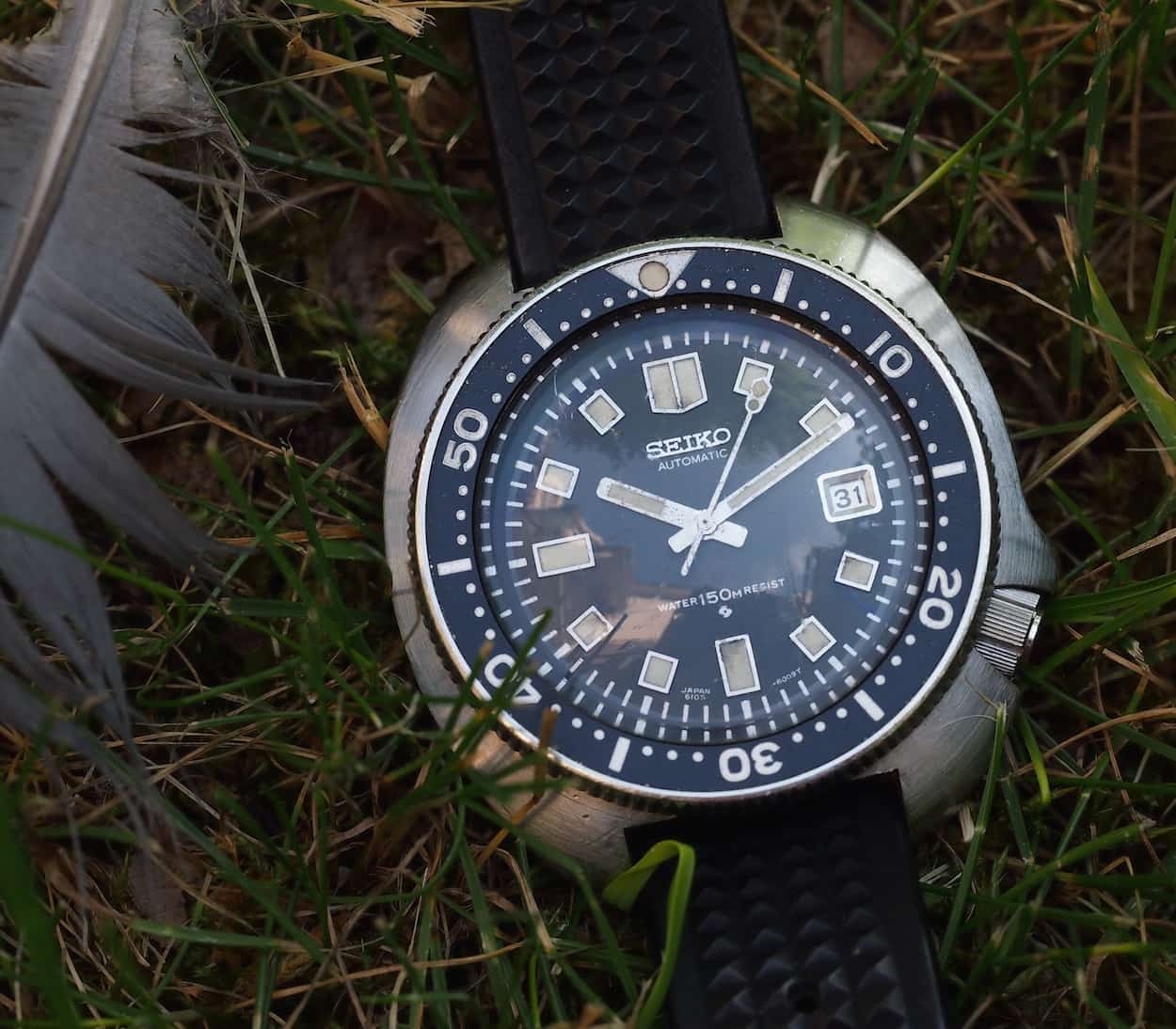 Regarding popular culture, the Seiko 6105 is famous for its presence in Apocalypse Now on the arm of Martin Sheen’s character, Captain Willard. The famous image is easily found by doing a simple search online. Related to this, though, is the fact that the 6105 was somewhat of a popular choice amongst soldiers during the Vietnam War. It was sold in military PX’s and while not cheap, it was certainly less expensive than, say, a Rolex Submariner. 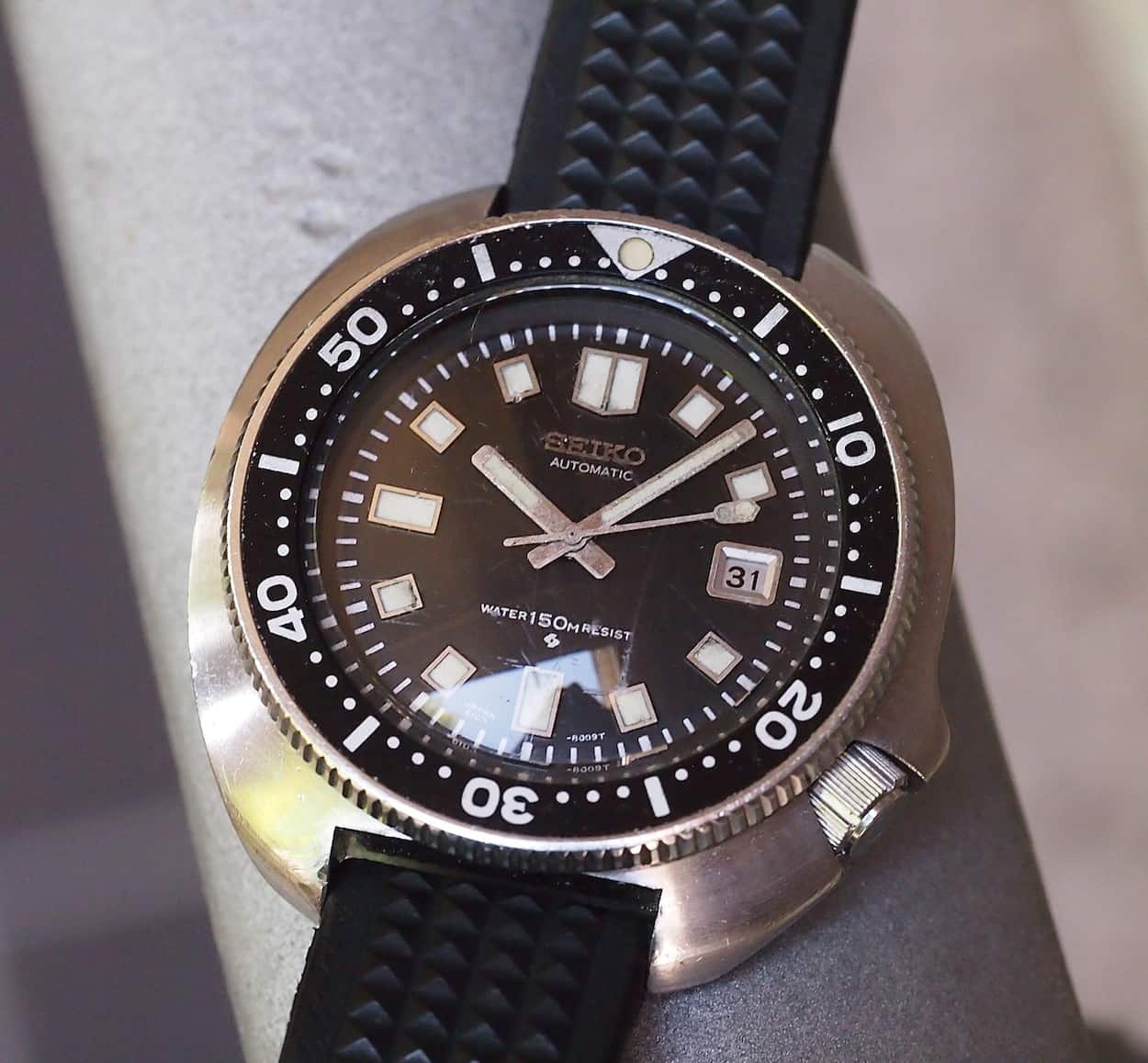 At 44mm in diameter, you’d expect the Seiko 6105 to wear like a behemoth on the wrist, but that simply isn’t the case. Perhaps it’s the soft shape or the slim lug width that helps, but it really wears much closer to 40mm. Speaking of those slim lugs and what lies between them, you’ll notice a rubber strap. However, this is no ordinary rubber strap but a waffle strap that was standard issue on watches such as this. In my opinion, this is the only strap that belongs on this watch. Of course, finding an original strap is problematic as they’re extremely rare, expensive and often damaged. Luckily, seller “wjean” on eBay has fantastic replicas for sale that fit the job. If you end up owning a 6105, I highly recommend buying one of these straps. 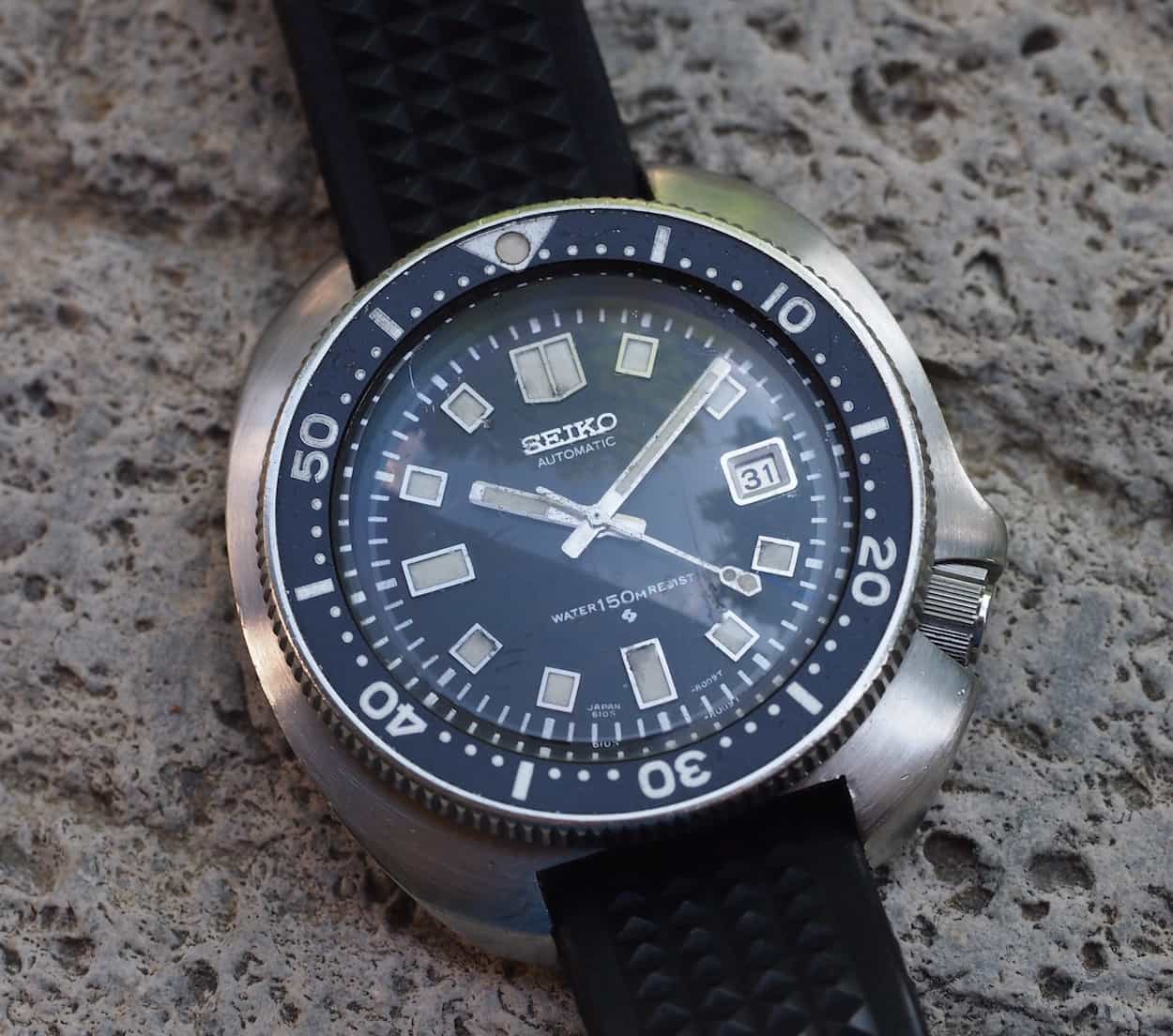 Finding a Seiko 6105 is not overly difficult, but finding a good one can be another story altogether. You’ll note from my example that the dial exhibits some characteristic “wabi” or lume rot characteristic of vintage Seikos. However, this example isn’t bad compared to many and it looks authentic compared to the vast majorities that have been refinished. This brings me to an important point; there are loads of 6105’s for sale and most of those have been altered. When it comes to alterations, they range from refinished hands and dials to parts replaced with aftermarket items. A tell-tale sign is the sweep seconds hand; if the colors are too poignant especially when compared to the rest of the dial and hands, something is wrong. You have to be very careful about buying a 6105 and ensure that you are getting something that meets your expectations. I’d generally say that perfect looking pieces are rare as most lived a hard life, but they do exist and are priced as such. Good, solid pieces have now appeared to eclipse the $1,000 mark and excellent pieces are hitting $1,500 and above. The market, at this time, seems to appreciate well-restored and refinished pieces, but, for better or worse, I am a stickler for originality. Another item to check for is crown to ensure it is the original stating “lock” with the rotating arrow. Bezel inserts are also often replaced with aftermarket inlays so do some homework on this as well. 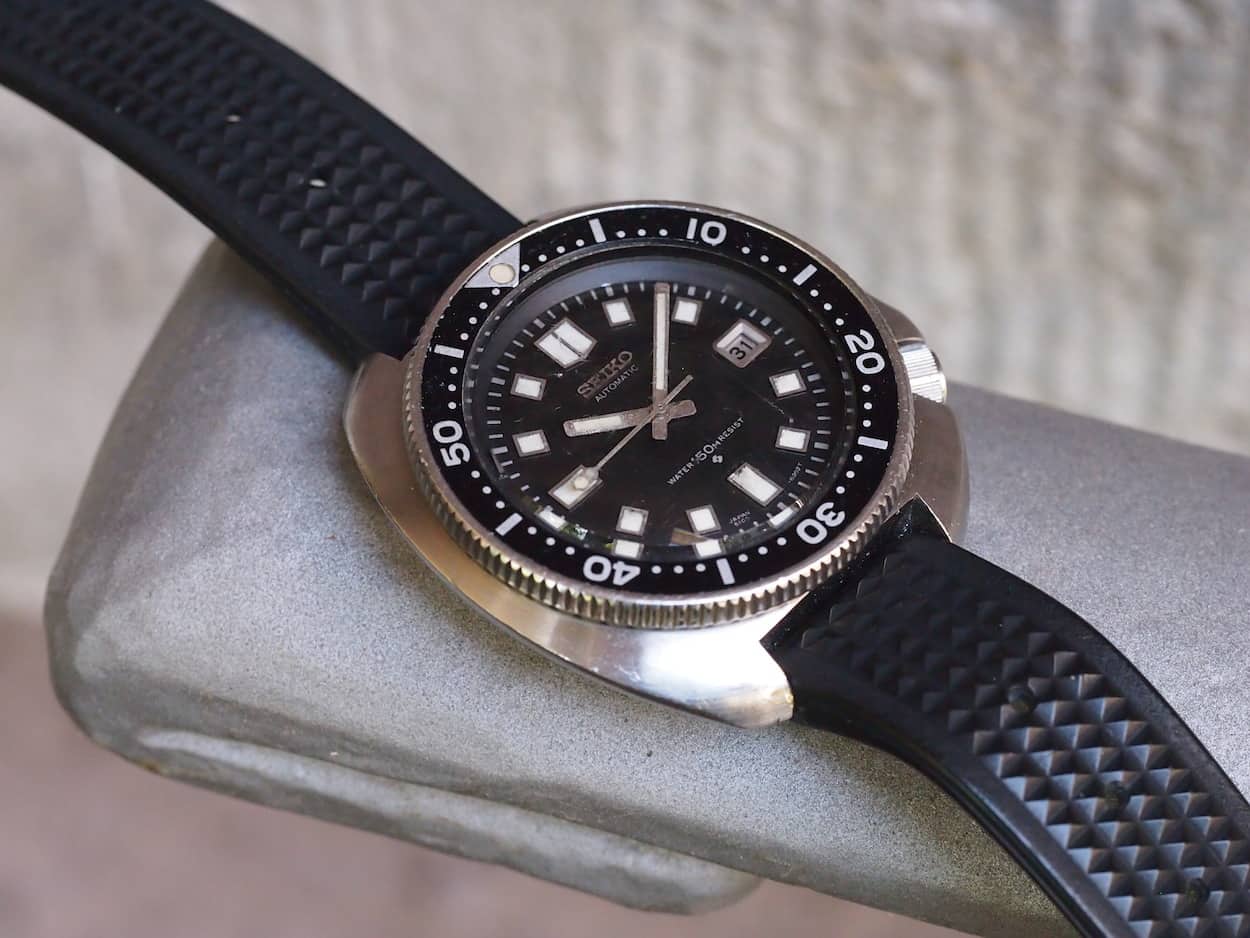 One Of My Favorites

The Seiko 6105 is an iconic watch in the Seiko diver chronology. It has a great case shape paired with an equally fantastic dial design. It was the beginning of my journey down a path of collecting most of the Seiko divers and it still remains as one of my favorites and perhaps the most distinctive. Its appearance in a legendary movie doesn’t hurt either. Feel free to share your thoughts below on this article or on which Seiko diver got you hooked!