After a one-week hiatus, #TBT is back!  Ironically, your author was on a plane for much of the last two weeks, which makes this week’s edition all the more special.  Enjoy!

If you’re like me, you spend a lot of time in other countries for work or pleasure. I honestly go through periods where I forget who I was talking to about what and where I held the conversation. With this type of instability that is generally accompanied by fairly radical time zone changes, travellers such as myself look for little things that help make globetrotting easier. Favorite passport holder or document keeper? Check. Certain pair of headphones that block out the chattering plane neighbor or, worse, loud snorer? Check. When it comes to keeping track of the time zones and life elsewhere around the globe, though, traveling watch collectors are often drawn to a certain type of watch that makes traveling just a little bit easier. This type of watch or, more accurately, the complication is known as the GMT. Oh, and as an FYI, as I type this, I am 8 hours off of GMT sitting in a hot but sunny Mexico. 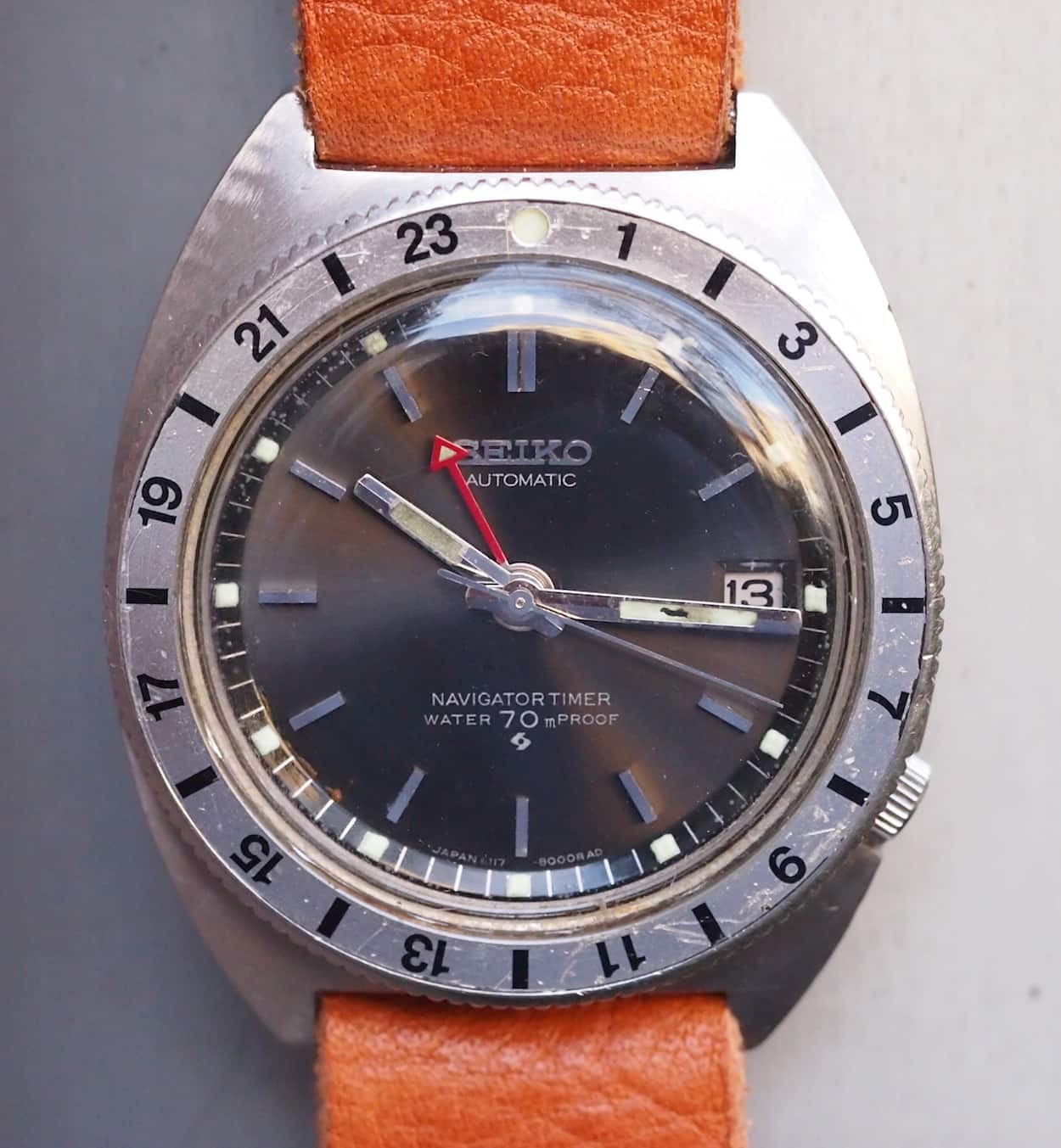 When most of us think of a GMT, we immediately recall the Rolex GMT that was developed with and for Pan-Am pilots in the 1950’s. It became the first watch to display a central second time zone via a 4th hand and a rotating 24-hour bezel. While that model has changed to some degree over time, it still looks somewhat the same. The vintage GMT’s are favorites of mine but because they are Rolexes they are also extremely expensive. In today’s edition of #TBT, we’ll take a look at a highly credible and affordable vintage alternative: the Seiko 6117-8000 Navigator Timer. 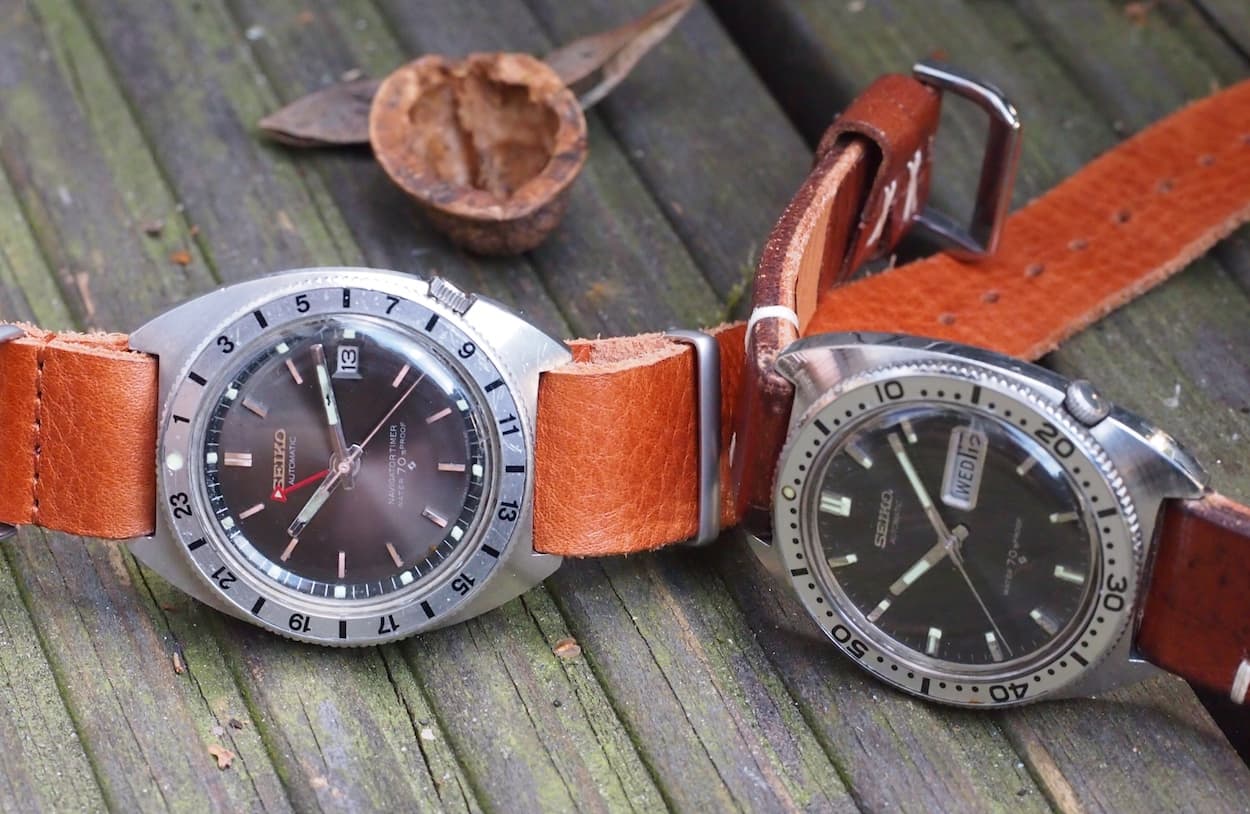 The Seiko Navigator Timer is one of those watches that belong in any vintage Seiko collector’s suite. It’s an absolute classic as far as design with some great colors, presence and functionality. Regarding the last point, like most Seikos, the Navigator Timer runs flawlessly. The 6117-8000 version we see today is essentially the second generation of GMT watch from Seiko and was introduced in the late 1960’s. It replaced a mid 1960’s version that was in the 6217 family and featured a dial loaded with different cities. One could rotate an internal bezel to the city of their choice in order to show a second time zone. It’s a neat, albeit archaic and busy looking piece. The 6117 in today’s article has a far more rugged, sporty look that fits in well alongside the 6106 Sport Diver that we recently featured here. I’ve also included it in some side-by-side shots to give you a good comparison as well. 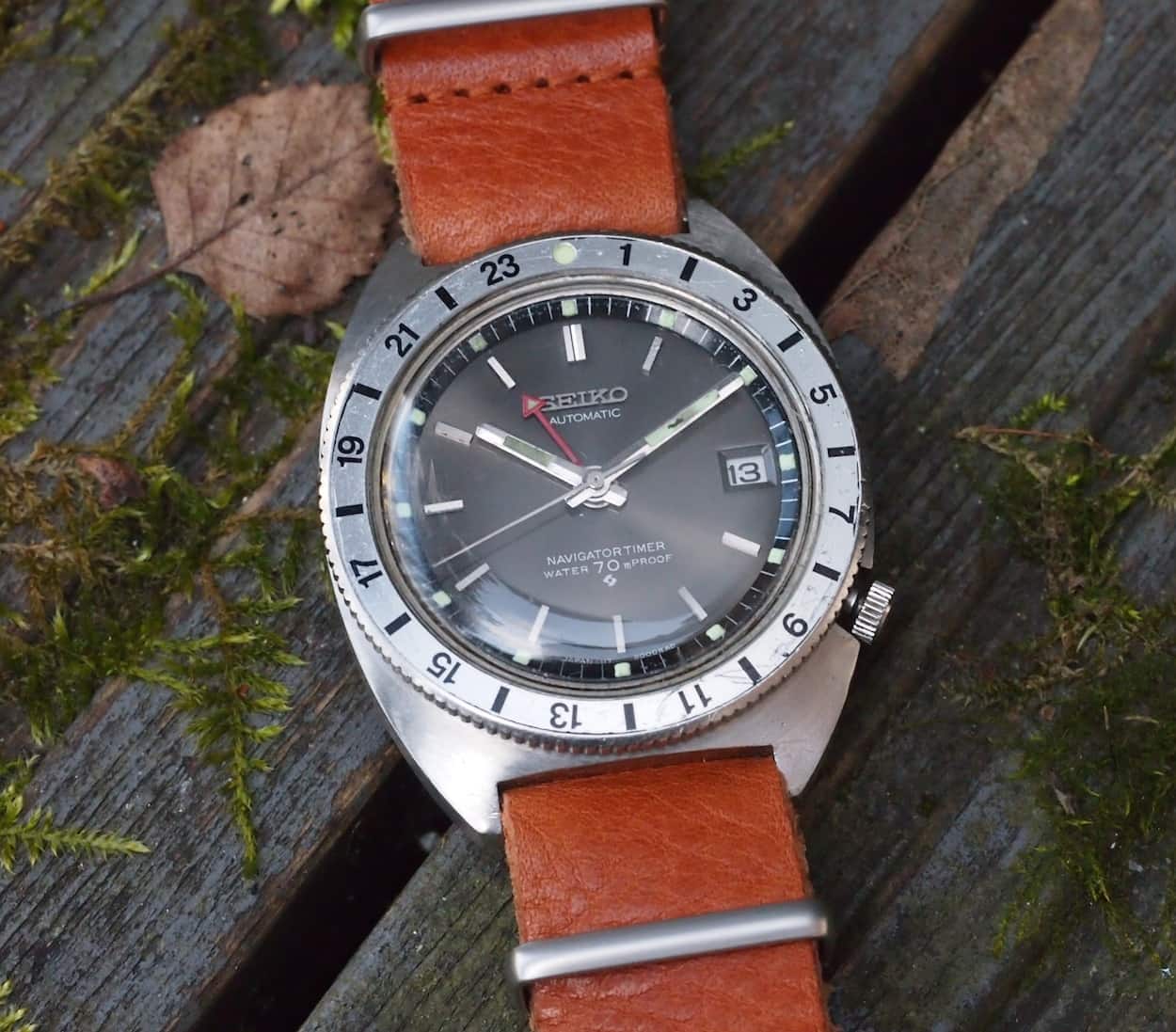 The Seiko Navigator Timer features an externally rotating 24-hour bezel much like a Rolex GMT, but in the case of Seiko, it’s not Pepsi-colored or even black. It’s steel colored like the case with black writing, which gives it an understated, yet purposeful look. It contains a lume pip at the zero hour and is adorned with serious, business-like font. The stainless case itself is essentially the same as on the 6106-8100 Sport Diver and has a cushion shape with non-hidden lugs. The crown, like most Seikos, sits at 4:00. 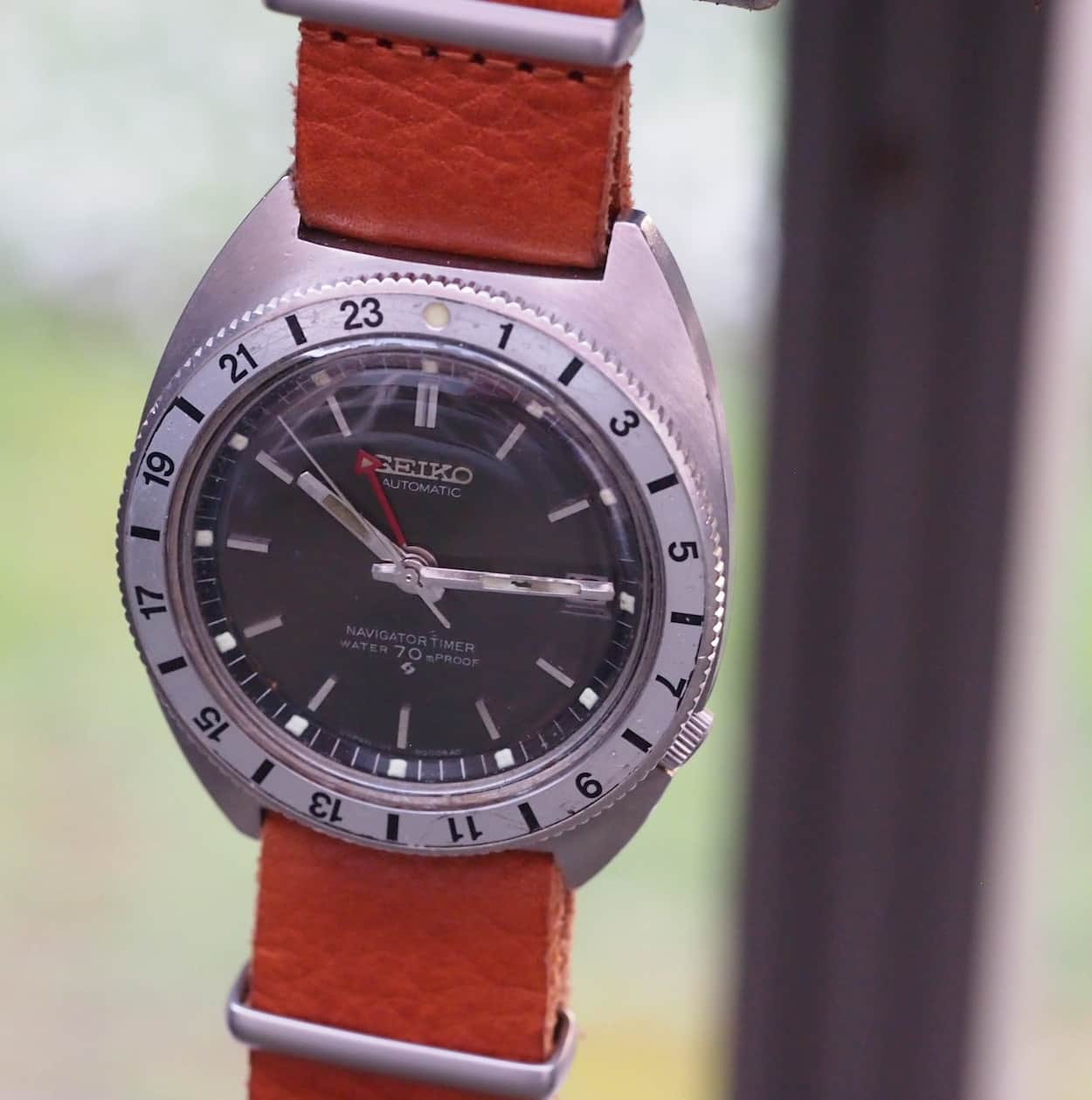 When we move onto the dial, we get some nice changes on the Seiko Navigator Timer versus the Sports Divers. First, you’ll notice that the watch only features a date and no day. While I’d argue that a day would actually be good for a travel watch (how many of you have woken up somewhere around the world not knowing the day??), the watch looks cleaner with the simply date window. Second, you’ll see a cool little red hand with an arrow-shaped tip. This, of course, is the second time zone hand. Much like the early Rolex GMT’s the second time zone hand does not move independently. As one sets the time, the red hand moves forward and essentially runs at half the speed of the normal time hands. This is achieved by linking it to the date wheel function. To indicate a different time zone, one aligns the external bezel to their liking in order to indicate time at home or wherever else. It’s simple and effective. One thing worth mentioning is that the Seiko, unlike the early, and even later Rolex GMT’s, is equipped with a quick-set date function. I can’t tell you how nice and convenient this is, especially for a watch that is used for travel. Date changes are accomplished by turning the crown instead of the typical push-in for other period Seiko’s. Like I said, it’s easy and makes wearing the watch a lot more convenient than some of my other non quick-set pieces. 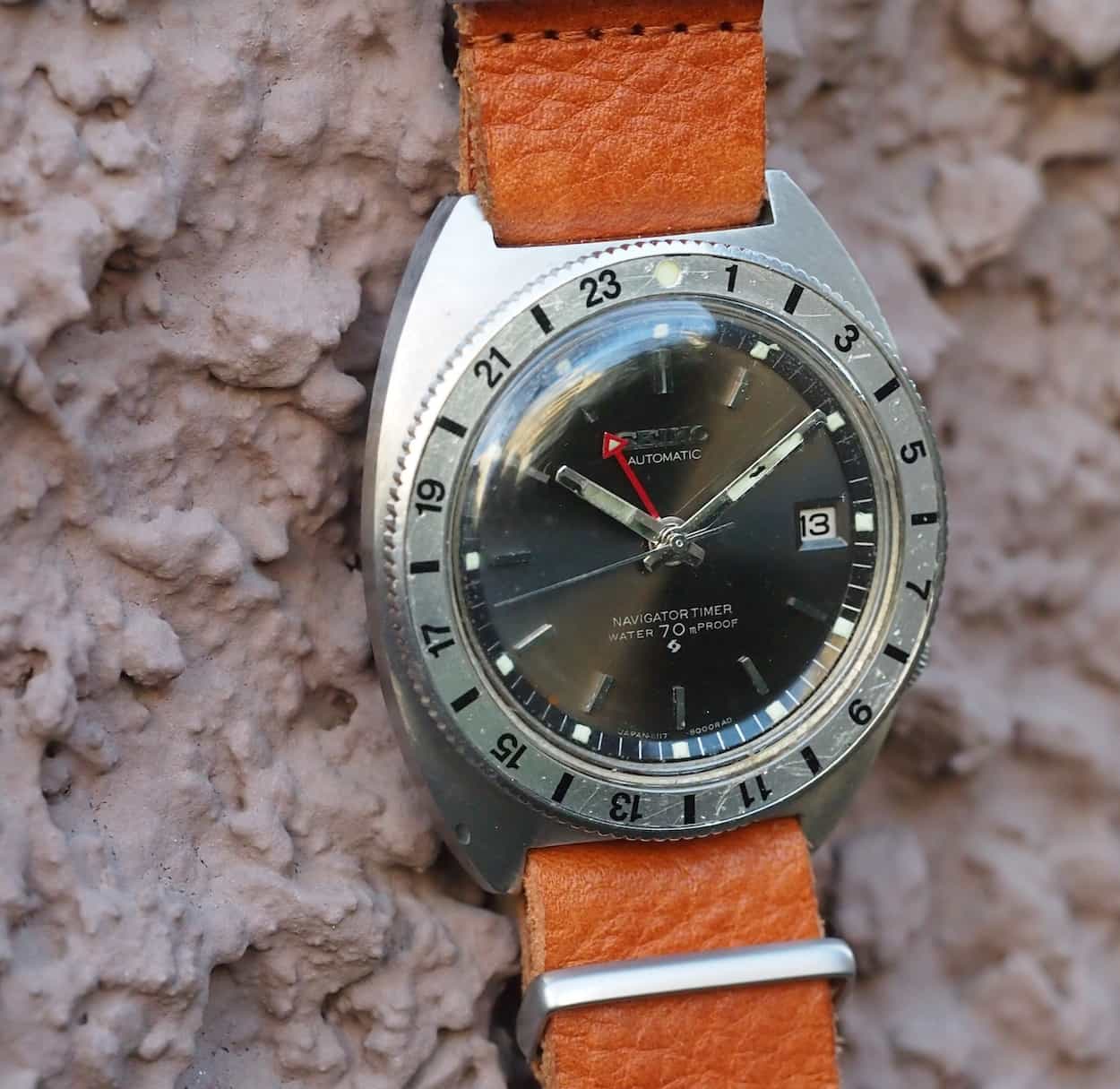 Inside sits a conventional Seiko automatic that cannot be hand wound due to the use of the magic lever. It is based on the 6105A movement found inside Seiko’s 6105 dive watches. It’s a 17-jewel movement that runs at 21,600 bph and does not hack. 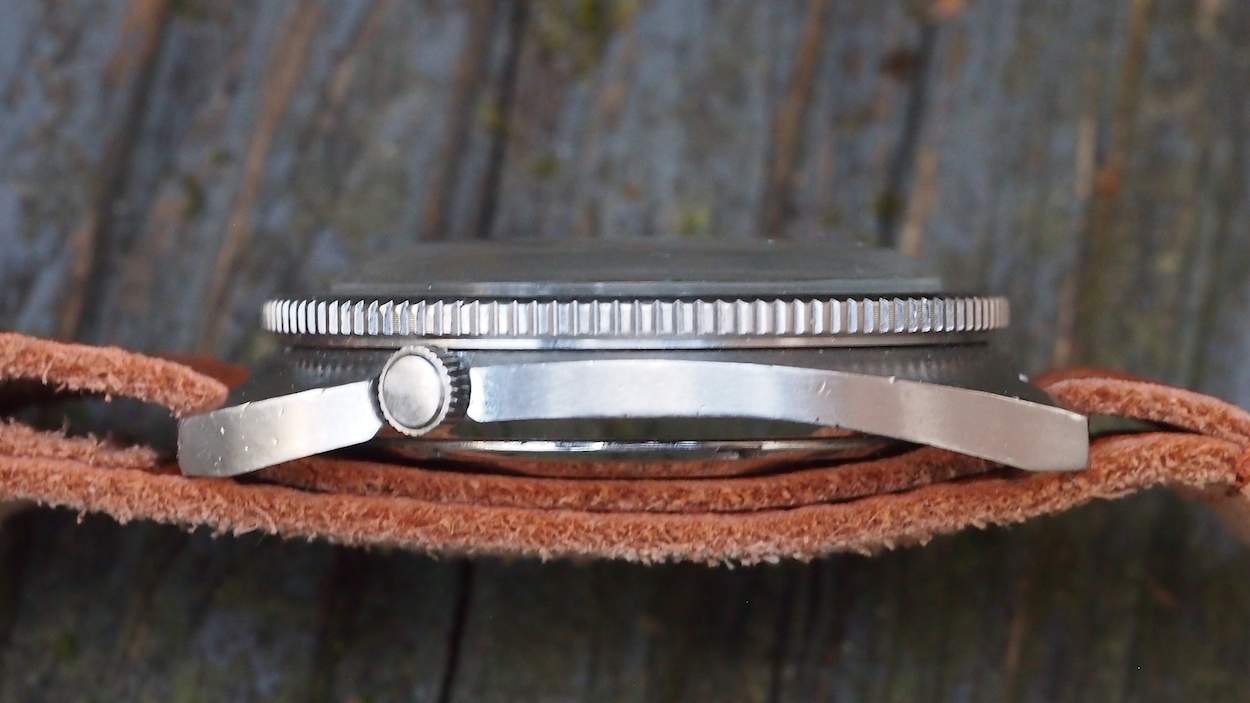 If we talk about wrist presence, I think the Seiko Navigator Timer wears large enough to fit with today’s trends, yet it isn’t some massive monster like so many of the current GMT pieces. I like the look of the original bracelet, but it’s often found in stretched condition. The piece you see in this article came without a bracelet so I paired it with a rugged, thick leather 19mm NATO. Funny enough, I met some other watch collectors the week prior to writing this in Southern California and saw my exact same watch on a very similar strap. Needless to say, this piece looks great on a brown leather strap. As mentioned earlier in the article, the Navigator Timer is one of those pieces that Seiko collectors pine for but due to its classic looks and color scheme; it attracts a lot of general vintage watch collectors as well. So, let’s talk about finding one of these pieces. 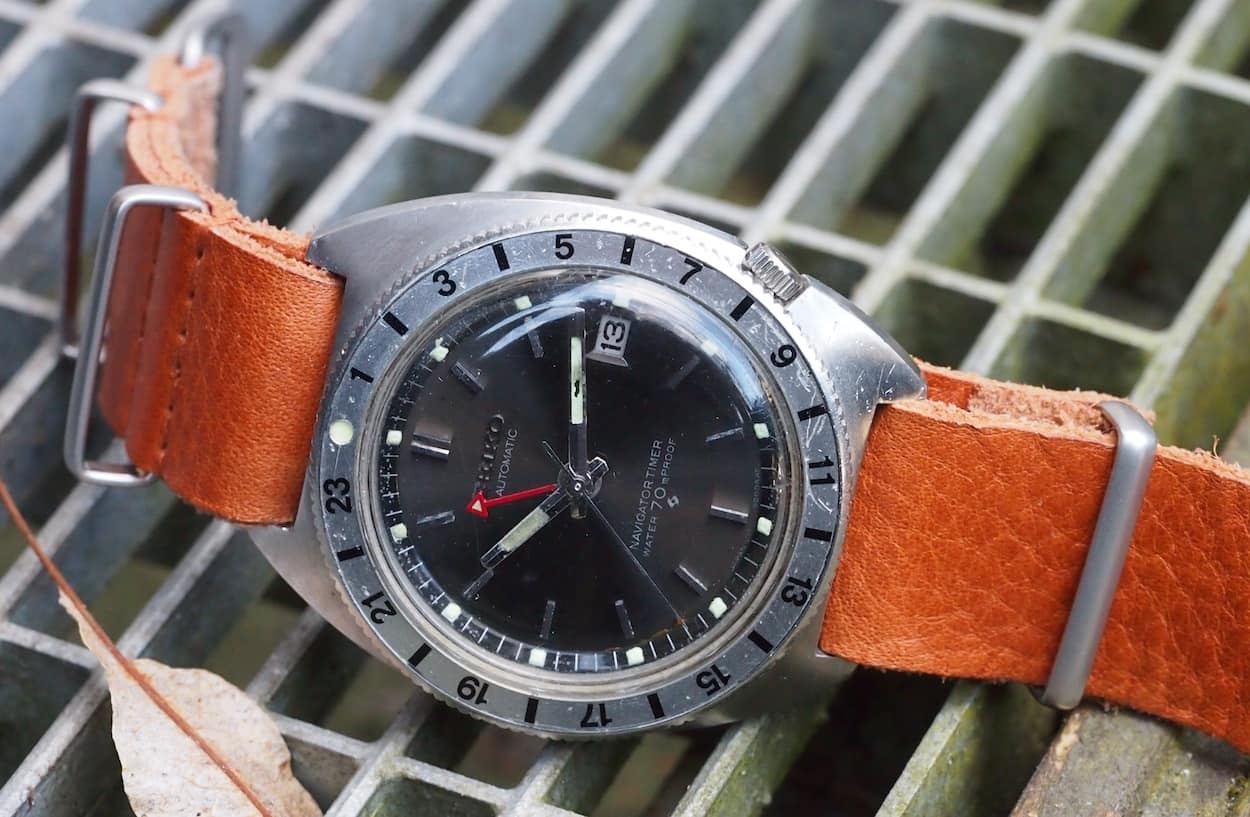 Finding a Seiko Navigator Timer does often require some patience. They do come up in forums and on eBay from time to time but are usually heavily bid upon or sold quite quickly. They came in a variety of colors such as white and silver but the gray seems to be most popular and prevalent. Also, many pieces are heavily worn or are equipped with the wrong hands. Also, check the chapter ring as these often show serious damage due to water entry. Mine, as you can see in the pictures is in nice shape other than showing some lume rot on one of the hands. Thankfully, the hands on this model were common with some other pieces so finding a replacement set or having them relumed should do the trick. An interesting thing to note is that many of the chapter rings and hands still glow! I’ve seen this on so many pieces that it’s hard to believe that relumes have occurred across the board. In the end, I have no idea what Seiko was using on this model, but it might belong in Homer Simpson’s place of work! 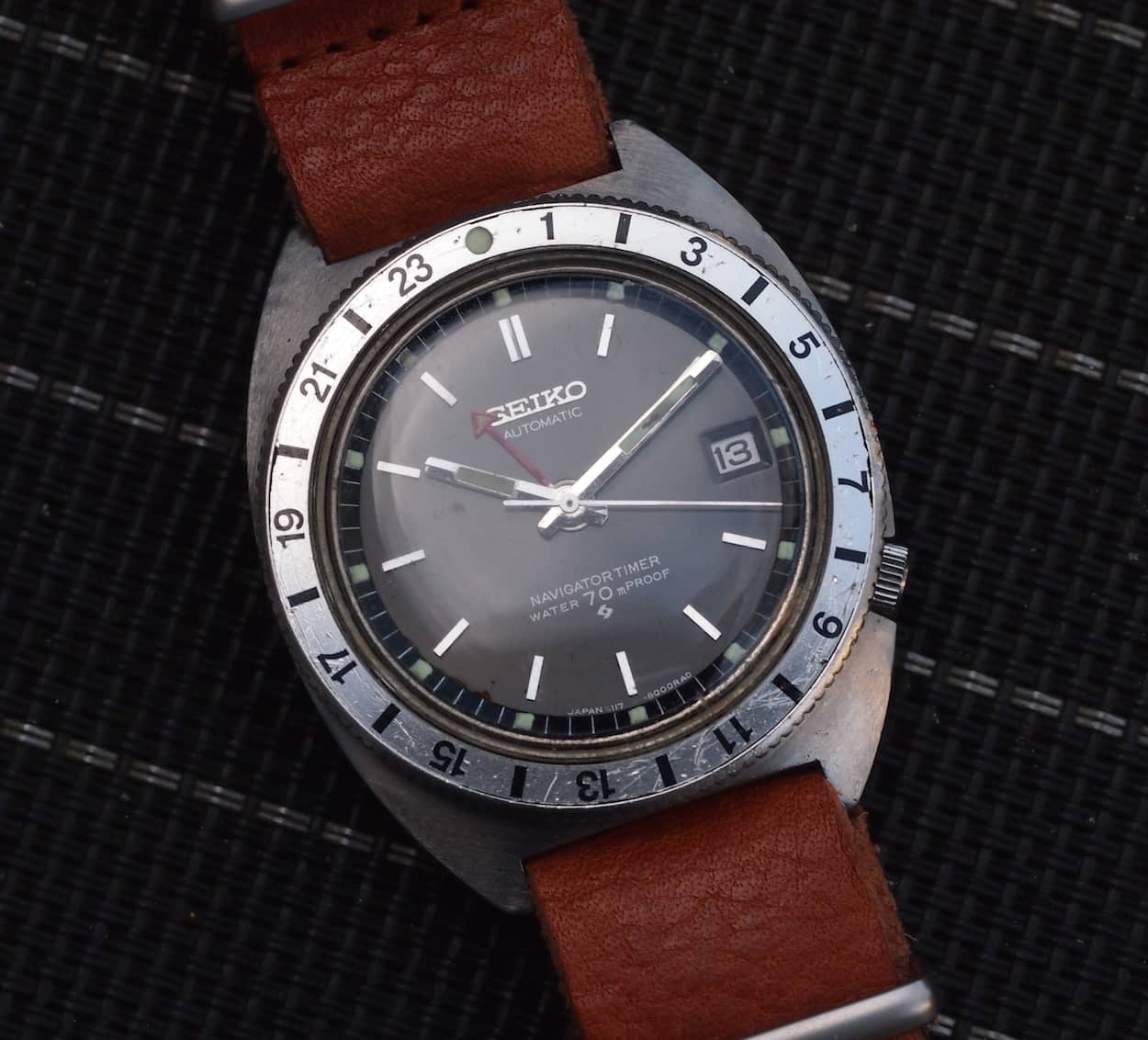 When it comes to pricing, expect the Seiko Navigator Timer 6117-8000 to fall somewhere in the $200-500 range. While I know that is a wide range, the sales prices often surprise me. The piece I own sold for $200 and I’ve seen rattier pieces often sell for $300 or more. So, at the time, the market seems to be all over the place, which means you can still find a good deal if you’re patient. 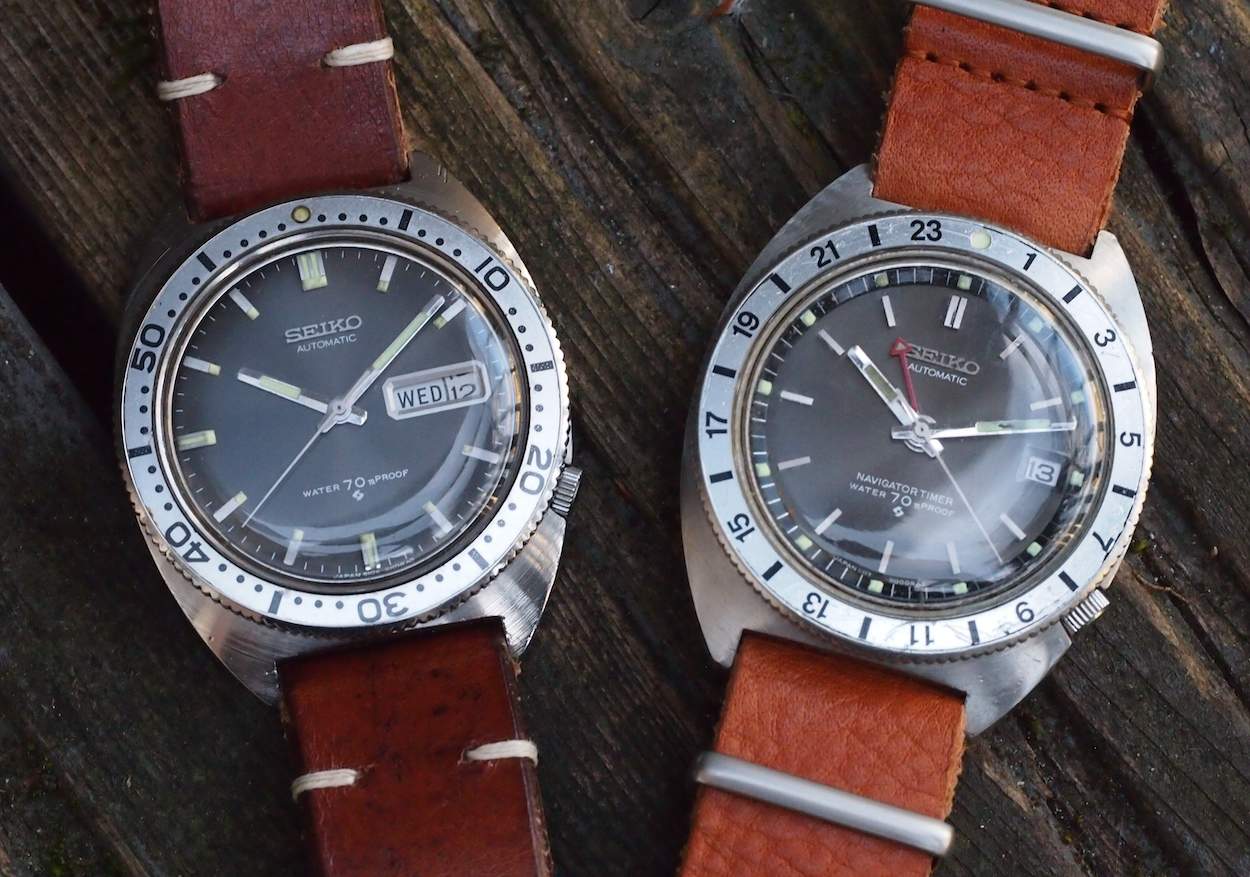 I hope you enjoyed this brief discussion and look at the Seiko Navigator Timer; check out the large gallery below.  It’s one of the great vintage Seiko pieces and represents a great, slightly different partner when roaming around the globe. Plus, unlike the Rolex version, you won’t see these every day. As always, if you have some stories about your piece or some pictures, don’t hesitate to share in the comments are below!