#TBT The Seiko SKX031 – An Unheralded and Affordable Classic Diver

Just when you thought you knew everything that Seiko made, mindless browsing usually reveals yet another model from the deep catalog. This was the situation I found myself in a few years back when I was in the midst of buying the lineage of Seiko divers. I thought I had uncovered everything when today’s #TBT subject appeared on a forum and surprised me. In the end, and we’ll discuss it, there was a reason for not seeing the watch beforehand, but I knew I wanted it. Let’s take a look at some very modern vintage with the Seiko SKX031. 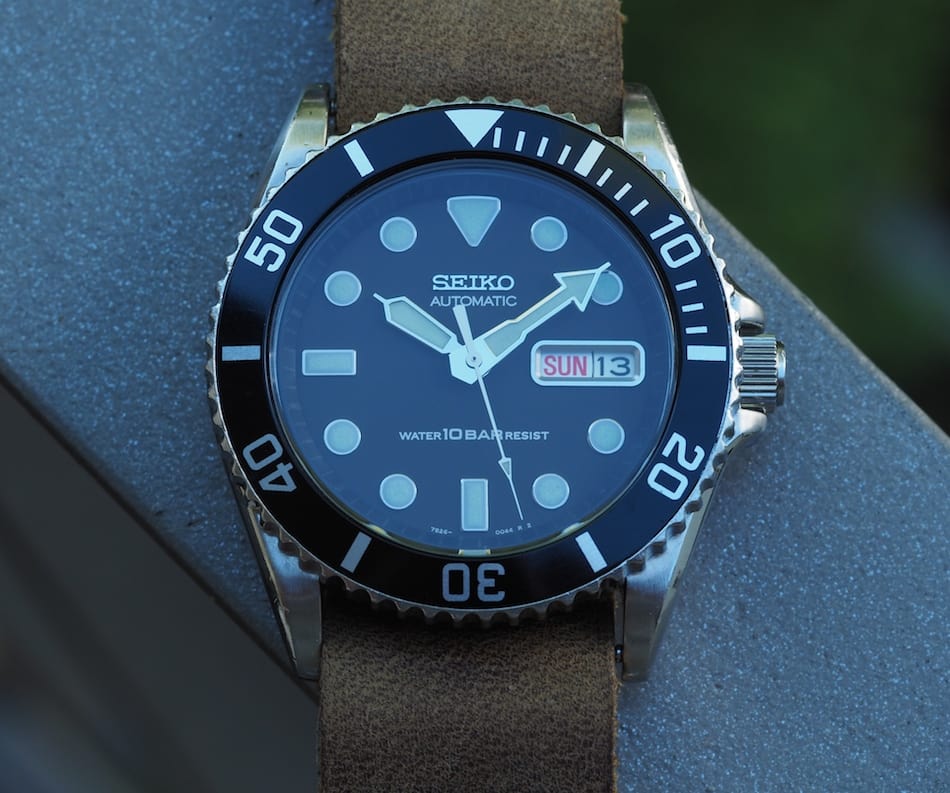 Seiko Makes and Made a Watch for Everyone

We’ve discussed it repeatedly, but it’s clear that Seiko makes a watch for everyone. More specifically, they make a dive watch for everyone. With water resistances from roughly 70 meters up to 1000 meters, the casual snorkeler up through the professional diver can find something from Seiko. For me, I was focusing on everything mechanical and diving/sports-related. On the low side, you can see an article where I discuss just some of the 70-meter vintage sport divers from the brand. Since then, we’ve written about a number of other dive pieces in Seiko’s history. What I somehow missed, though, until relatively recently was the Seiko SKX031 100-meter diver. 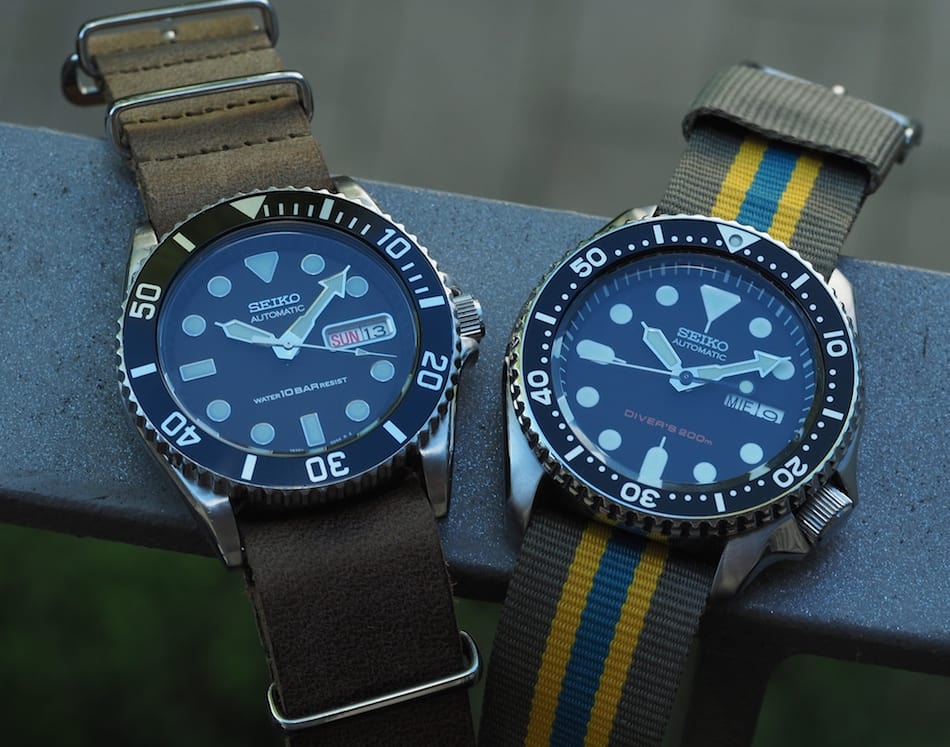 Born in 1996 with the introduction of the 7S26 movement (the official serial on the case back is 7S26-0040), the Seiko SKX031 was introduced as a lighter choice than the legendary SKX007. Versus the icon, the 031 traded down on some key aspects (such as a 100-meter water resistance versus the 007’s 200-meters) but it oddly traded up on others. Think of it as a light diver, but it’s one that has some relatively high-end features – especially when you consider what Seiko replaced it with in 2008. 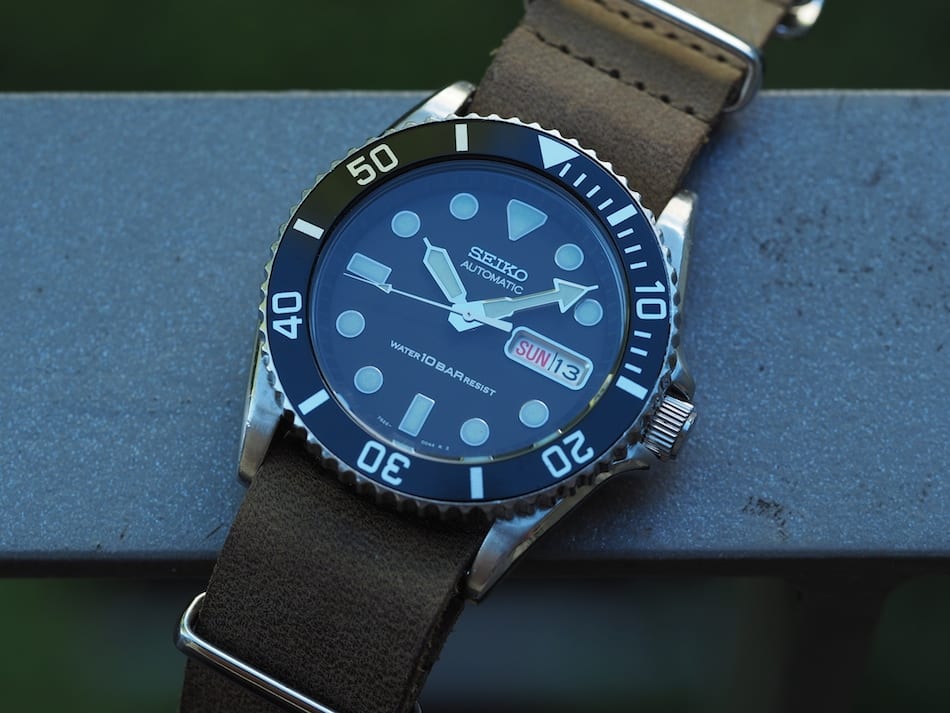 The Seiko SKX031 immediately strikes one as a Submariner clone – it is known as the “Seiko Submariner”. With its un-Seiko like crown at 3:00, versus the customary 4:00, and a case design that could certainly be accused of aping the big Swiss brand, the nickname is somewhat deserved. That being said, the general case design and the fact that the bezel insert is “hashed” for the first 15 minutes are about all that the SKX031 shares with the far more expensive diver. A quick look at the lugs, for example, will show some pretty large chamfers and a set of calipers will tell you that, despite a Sub-like case size of 40mm, the lug width is actually wider at 22mm. 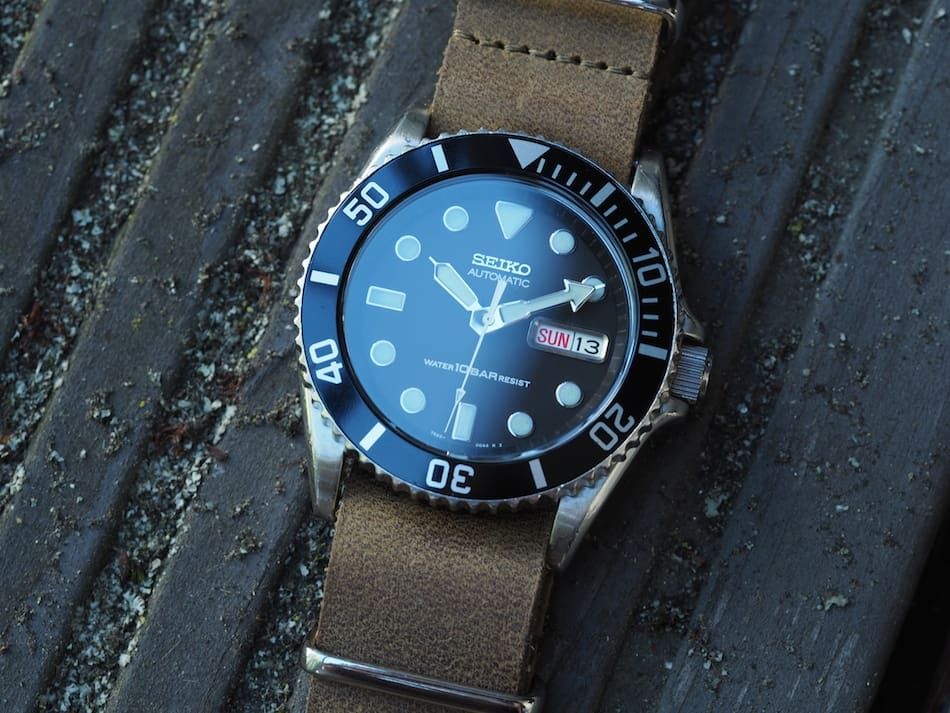 Dial-wise, the Seiko SKX031 strangely moves upmarket versus the SKX007 with its applied logo and indices. There’s a lot to like with the dial because, unlike on the SKX007, the hands and indices at least come closer to matching. Plus, the indices, stylistically, remind me of something in between a normal Seiko and the Sub. They’re simple but bring a higher-class look to the dial when comparing to the 007. The hour and minutes hands are essentially the same as the 007, but the 031 trades the back-end lollipop hand for a white painted hand with a slender arrow tip. To be honest, I like it and the hand design overall. Another nicety is the chrome surround for the day/date window. The window itself is normal Seiko fare and in this case, alternates between Spanish and English. I’d say my only complaint is the lightly marked inner tension ring spacer – and the fact that it’s not aligned – as it seems like it’s hiding. 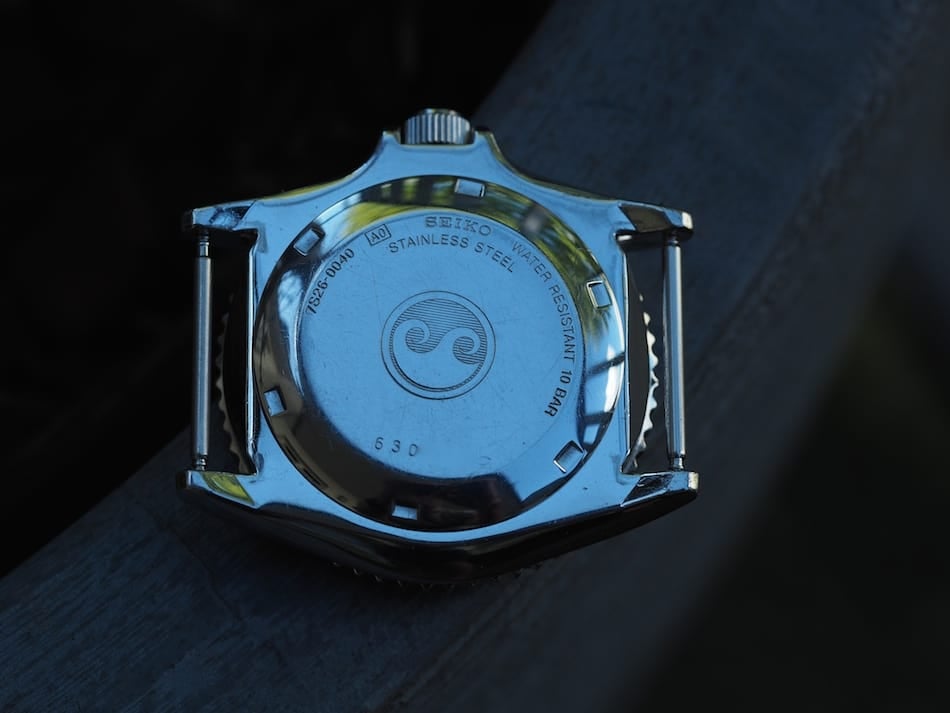 Other details of note on the Seiko SKX031 are the use of a simple wave logo on its screw-down case back versus the more prevalent tsunami motif. This wave generally represented lighter, non-professional Seiko divers. Moving on, I mentioned the use of screw-down crown. It’s large, bordered by large crown guards, and features Seiko’s typical flat top. 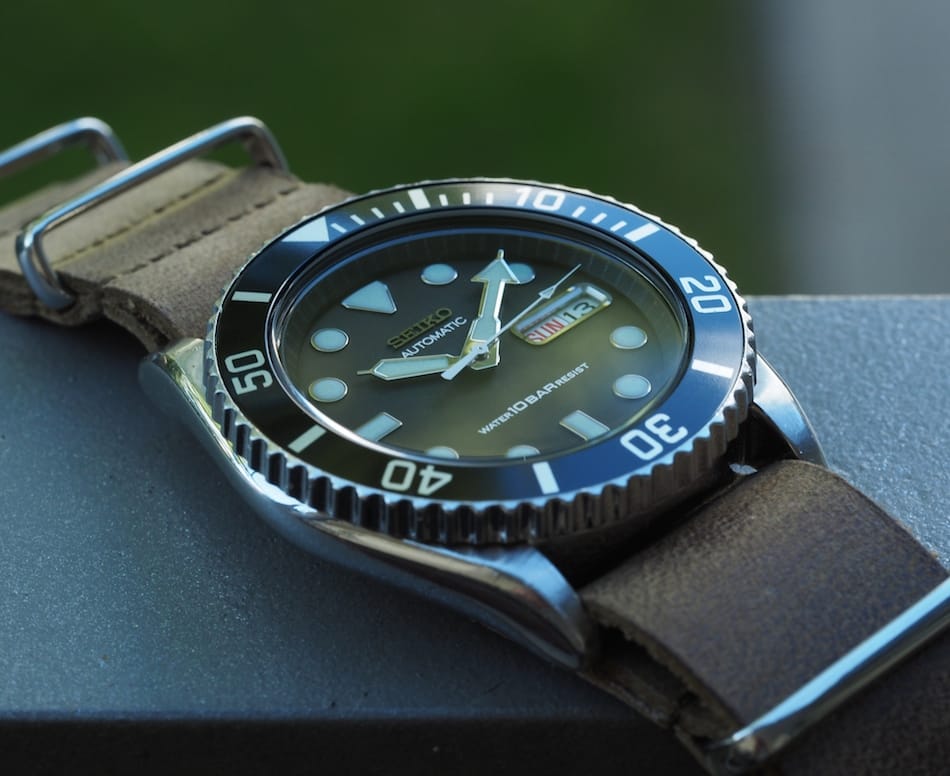 When I discovered the Seiko SKX031, I decided I’d try to track one down. What I quickly realized was that, for a watch made for over 10 years, it wasn’t so simple. Watches were often modified, in bad condition, only in the Philippines, or wildly priced. Then, one day, a longtime forum member on the Seiko Citizen Watch Forum was selling his well-worn version for the princely sum of $50. Granted, it needed a new bezel insert, a service and a crystal. I found a Seiko OEM bezel insert for $10, a crystal for the same and a service for about $80. So, in the end, it was a $180 watch that I knew had been brought back to proper specs. Today, a nice SKX031 sells for anywhere from $200-275 with examples falling above or below that dependent on luck and the seller. There’s even a dark blue dialed version with Pepsi bezel (the SKX033) if you find those colors are more approachable. 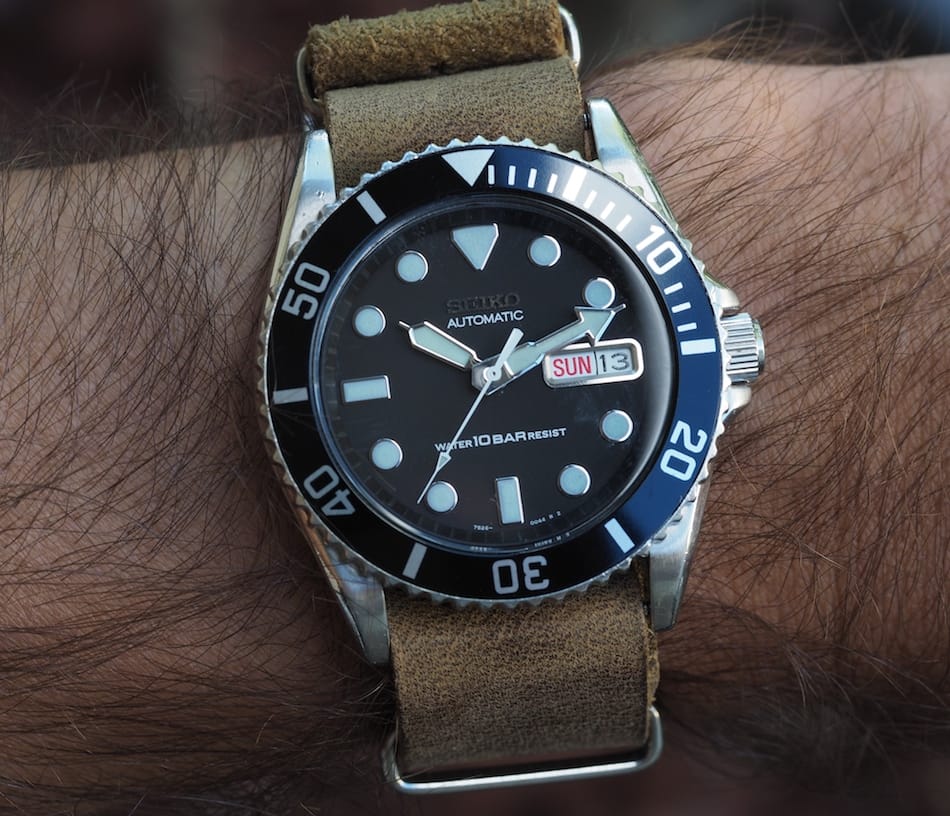 You can see that I paired the Seiko SKX031 with a nice 22mm NATO, but anything will do. It fits well due to its familiar size and comfortable case. Yes, it’s odd to see a Seiko on the wrist with a crown at 3:00, but it’s a great looking and amazingly classy watch. Seiko replaced this watch with the SNZFxx divers. They’re thematically similar but sadly lack the screw-down crown of their predecessors. Price-wise they’re $200 watches, so the neo-vintage pieces are worth the hunt. 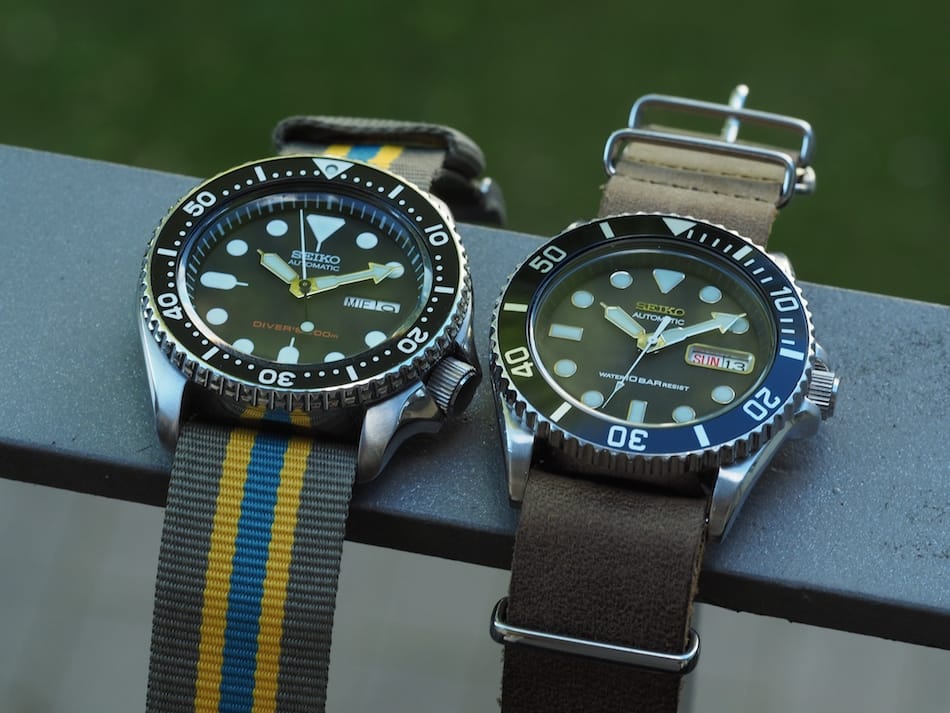 For some of you, I hope this is the first look at a highly accessible and worthwhile watch. For those who already own the Seiko SKX031, the attributes are well understood. It’s also nice to know that there’s a nice alternative to the well-known SKX007 and within the same brand.  Oh, and if you’re worried about 100 meters, consider how often you test that depth.